Pink Beach is located on the east coast of Harbor Island. Its second name is the island of pink sands. Its length is about 5 km of fine powdery orange-pink sand. This gorgeous coastline is repeatedly listed as one of the best beaches in the Caribbean.

Harbor Island itself is small, about 5 kilometers long and 2 kilometers wide, but it is world famous for its famous beach that beckons all the tourists and celebrities from all over the world with its color. And no wonder, because the beach pink color is an amazing and rare phenomenon. Its second name – the island of pink sands. In English it is called “Pink Sands Beach”, but the locals say “Briland”, although there is another name – “the Nantucket of the Caribbean”. Forbes magazine even called Pink Sands Beach “the most beautiful beach in the world.”

The pink color of the sand comes from the small, crushed grit of Foraminifera shells, single-celled organisms that live at the bottom of reefs, under rocks and in caves on the coastal ocean floor, whose shells are colored bright pink or red. Also the red color of the sand is given by the corals, which have red coloring near the coast. As a result of the action of storms and coastal waves, foraminifera shells and coral parts are thrown on the shore, where they break into small craters that mix with the sand, giving the beach Pink Sands Beach such an unusual pinkish-red color.

The sand on the beach is hard and resilient, it is comfortable to rest on, sunbathe or run, the beach is gently washed by warm water, without a sharp surge of waves. The coastal waters are ideal for bathing and swimming, as the coral reef protects them from the surf of the Atlantic Ocean. And thanks to the palm trees, of which there are many, the beach is always cool, even on hot days, which allows you to walk around the island without suffering from the heat. The island is also known as the best place for diving, as it has the most ideal conditions for diving in the water, local waters are very clean and visibility extends up to sixty meters, which allows you to consider a surprisingly beautiful and rich underwater world. Therefore, the island attracts a lot of fans of scuba diving from all over the world.

The beach is so popular and its popularity is increasing every year that it is loved by celebrities, even bought a house near the beach. Walking around the island you can see the homes of Keith Richards, Robin Williams, Susan Sarandon. Against the pink sands of Pink Sands Beach, models like to be photographed for glossy magazines and advertisements.

If you decide to come to relax on this amazing beauty beach, you know that the right season for recreation lasts from September to May. The water is warm and calm almost the whole year, because the beach is protected by coral reefs.

Because of its fame, the island has several dozen first-class hotels. For example, 25 cottages of Pink Sands Hotel overlook the sea. They are separated from each other by lush tropical thickets. The hotel is for lovers of luxury and lovers of secluded recreation on the picturesque ocean coast. Jasmine, hibiscus, bougainvillea, orchids of all varieties and shades bloom all year round here. The best room of the hotel, Bimini Cottage, stands on a hill, it offers a fantastic view. Soak in the bubbling Jacuzzi on the terrace and watch the sun sink below the horizon, turning the beach red.

Do not forget to look at the island of Harbor in the souvenir stores and stores, the prices are very low and very much will surprise you, all thanks to the local authorities, who regulate the prices under their approved program of economic development of the island. And there is something to buy, there is almost everything, but the best purchases on the island, of course, are the local souvenirs that will allow you to return here in your mind again and again looking at them at home, but also the most appropriate gifts for friends, because these souvenirs can be purchased only on the island.

The Pink Beaches of Harbor Island. The Bahamas

The Bahamas is one of the most heavenly places on the planet. Tropics, ocean and sandy beaches – everything you need for a classic perfect vacation. The Bahamas is about 700 islands and about 2,000 coral reefs. And it’s all in the waters of the Atlantic Ocean and in a tropical climate belt – the perfect combination.

Every island in the Bahamas is worthy of attention. But now we are interested in Harbor Island and its pink beach.

Harbor Island is an island and administrative region in the Bahamas, located off the northeast coast of the south-north Eluterra Island (actually, this part of the island is called North Eluterra).

Harbor Island has an elongated, almost exactly north-south shape. It is 5.3 kilometers long and up to 810 meters wide. This island differs from other tropical islands because it has a pink beach. And this beach is famous for its fairly impressive size. The whole east coast of the island is one big pink beach (originally Pink Sands Beach) about 4,5 kilometers long. 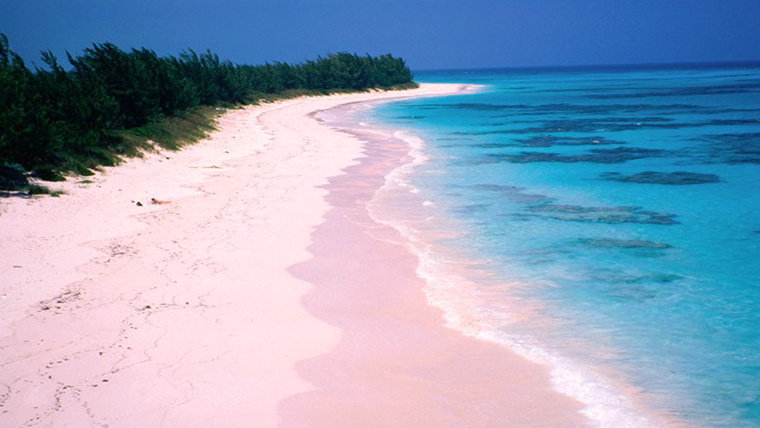 Pink Sands Beach on the map

The east coast of the island is securely protected by coral reefs from the raging Atlantic. So the ocean is calm and serene here. The west coast is actually the shore of a large but not very deep inland lagoon, surrounded on all sides by islands.

Incredibly clean and clear waters around the island attract divers from all over the world. Visibility underwater can reach up to 60 meters. This allows you to experience and view the beauty of the Bahamas underwater world. 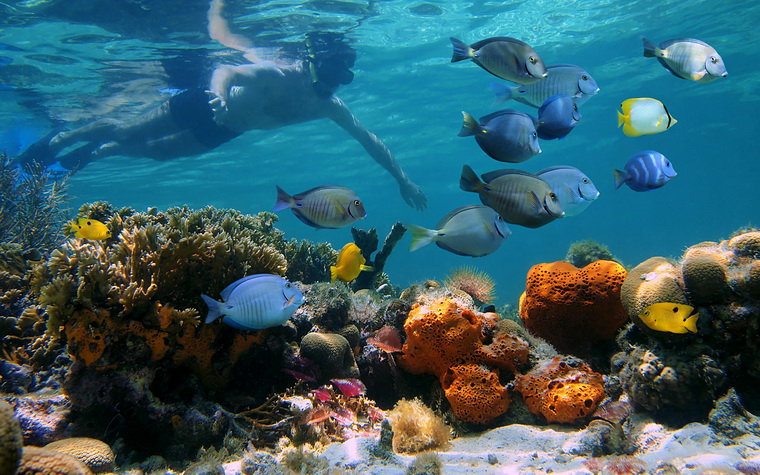 Diving off the coast of Harbor Island

But back to the biggest attraction of Harbor Island, its incredibly beautiful pink sands.

When you see such splendor, you get the feeling that these photos are unrealistic, or at least they are quality photomontage. Nevertheless, everything depicted in the photos really exists in nature. 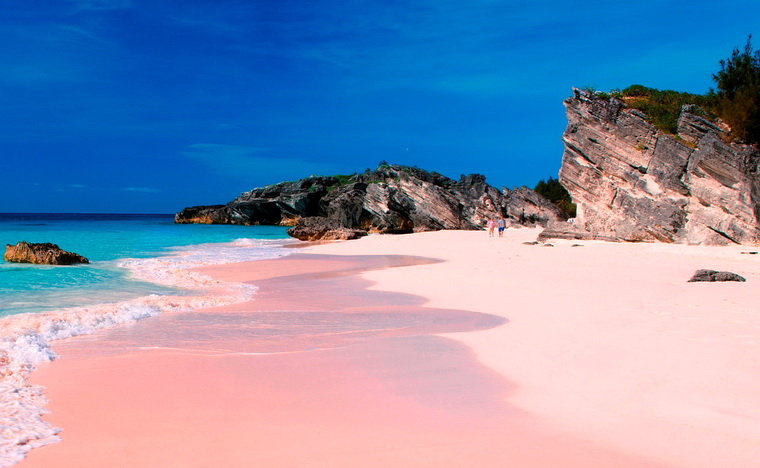 Why the pink beach has pink sand

Depending on the light and other factors, the sands shimmer in all shades of pink. This is not an optical illusion. The reason for this unique phenomenon is the presence of many reddish and pink inclusions in ordinary sea sand. They are small fragments of corals, shells and microscopic organisms foraminifera, which have a reddish-pink shell. The whole cocktail, grinded by time and surf in the fine sand, and creates that unique and distinctive color of the beach.

On closer inspection, by the way, you can clearly see these small colored flecks. They come from roughly the kind of shells you see in the photo below. 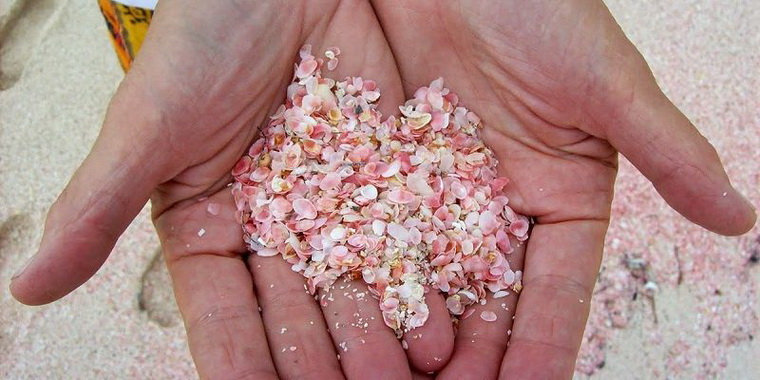 The source material for the creation of pink sand

Holidays on Harbor Island are characterized by their tranquility and absolute serenity. Here you will not find huge hotel complexes and large hotels. On the coast scattered only small hotels and comfortable private villas. Everything is designed to maximize the immersion of tourists in a state of true relaxation.

Dunmore Town is the only town on the island. It takes up most of the island and is one of the oldest towns in the Bahamas. It was founded in the 18th century. In Dunmore, there are a little less than 1800 people, most of whom work in the tourism sector (mainly making souvenirs and work for the benefit of tourists). The streets of the town have a magical appeal. Honestly, would you like to live here? 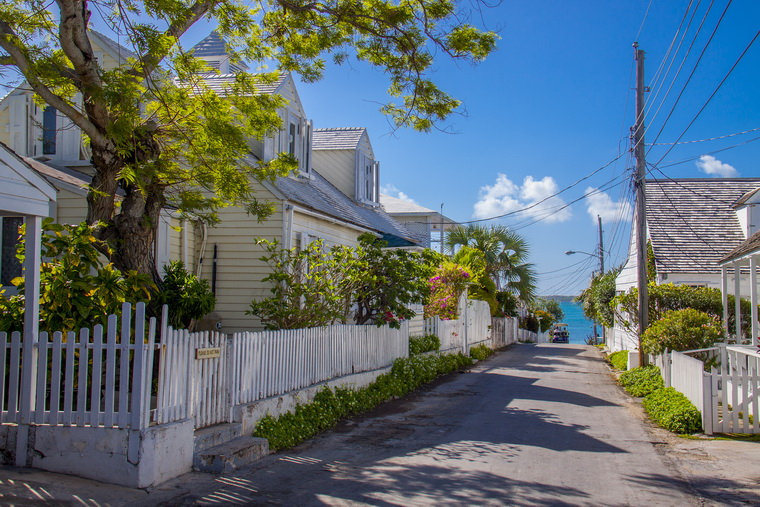 I don’t know about you, but we’re already saving up for a summer house in Dunmore.

There aren’t even any cars here. It’s easy to get around the island in electric golf carts. Or you can just walk along the coast on foot (well, the size of the island allows it). But the rest on the island is quite expensive. The price for a standard room overlooking the ocean and the pink beach starts at $ 1,000 per night. 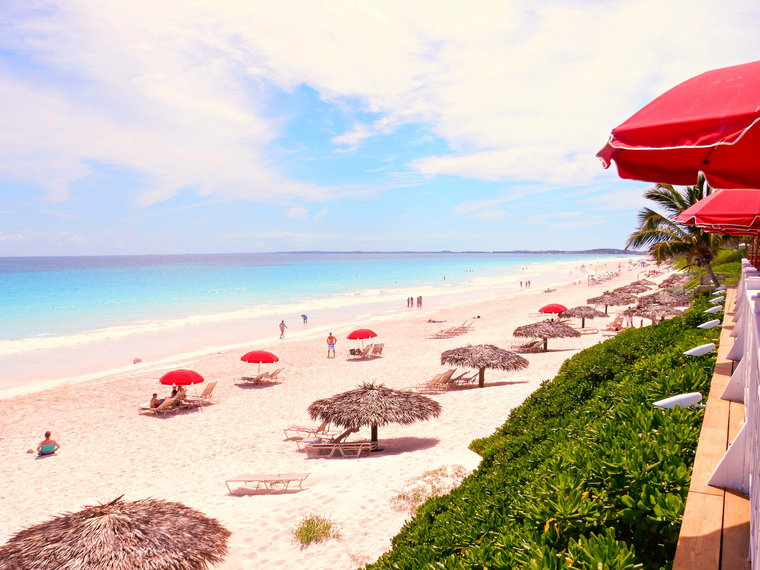 To get to Harbor Island and its pink beaches, you first need to arrive in the capital of the Bahamas, Nassau, then fly to North Eluther Airport, and finally take a 15-minute ferry ride from there to Harbor Island.

It’s not just the sands that can be pink, but also the lakes. For example, Lake Retba in Senegal or Lake Hillier in Australia. The color of the water of these lakes is worthy competition to the beaches of Harbor Island. 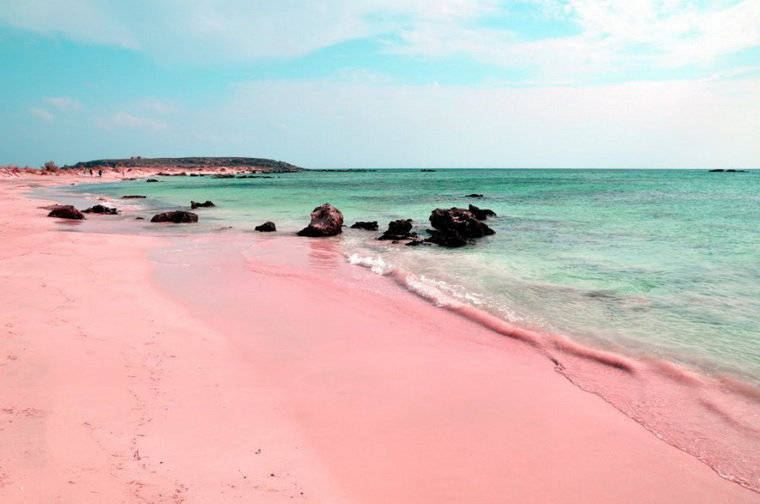 Harbor Island and its Pink Beaches