The Harbour Bridge is Sydney’s largest bridge and one of the largest steel arch bridges in the world. It is one of the main attractions of Sydney. Australians jokingly call the bridge “the hanger” because of its unusual shape.

In the distance we saw the bridge. It was amazing. It rose above the bay like a deep sigh. In a deep cloud of light it floated among the muddy dull banks. Its arc swelled with steel biceps. D.A. Granin, “The Month Upside Down.”

The Harbor Bridge arch span is 503 meters long. It is slightly shorter than the 518-meter span of the longest steel arch bridge, the Fayetteville Bridge, over the gorge over which the New River flows in the U.S. state of West Virginia. Since nowadays when it is necessary to build a bridge with a long span one chooses the suspension or cable-stayed bridge scheme, as they are much lighter and cheaper than the rigid arch bridge, the Harbor Bridge will continue to top the list of the world’s largest arch bridges for a long time to come.

The steel arch of the Harbor Bridge weighs 39,000 tons. It rises 139 meters above sea level and has a clearance of 49 meters above the water surface of the bay, which allows the passage of any ships under the bridge. Interestingly, the height of the arch can increase by about 18 cm on hot days, due to the fact that the metal expands when heated.

The total length of the entire bridge is 1,149 meters. Its width is 49 meters, and the total weight of the bridge is 52,800 tons! Steel elements of the bridge are connected by six million rivets.

Since October 1, 1998 on the bridge are excursions for people over 10 years – climb up the side arch to the top of the bridge, where you can enjoy a breathtaking panorama of the city. To climb the tourists will need rubber-soled shoes and a special suit with insurance, which is issued on the spot. With all the difficulties will help to cope with the accompanying instructor.

READ
Charles Bridge over the Vltava River in Prague

For those who are going to visit Sydney in late December, remember that the Harbor Bridge is an important part of New Year’s Eve celebrations and is used for spectacular pyrotechnic shows. The first, the so-called “family” fireworks show, held at 9 p.m., attracts a large number of families with young children. The second, the main fireworks show, starts at midnight. The idea for the fireworks came after the Brooklyn Bridge Centennial Celebration in 1983. In 1986, pyrotechnician Sid Howard first realized the idea during the celebration of the 75th anniversary of the Australian Navy. Since 1999, spectacular pyrotechnic shows have been held annually, with each subsequent year’s festivities having a new theme. Fireworks attract a large number of residents and visitors to Sydney, as well as viewers around the world. So the New Year’s Eve 2010-2011 show was watched by 1.1 million viewers and 1.1 billion television viewers!

Before the construction of the Harbor Bridge in Sydney, the northern area of the city on the left bank of the Paramata River at its mouth was virtually isolated from the city center. Communication was by a long railroad track or by a highway with five bridges.

The plan for a bridge between Davis Point and Wilson Point began in the mid-nineteenth century. Over the next 50 years, 24 bridge projects and one tunnel project were proposed, but under careful consideration in 1904 they were all rejected.

Then the project was taken up by an Australian, John Job Crewe Bradfield, chief engineer of the Public Works Department. He was the author of the preliminary recommendations on the basis of which the specifications were prepared for the International competition of arch bridges with granite shore abutments held in 1922. The winning design was by the London engineer Sir Ralph Freeman of the Dorman Long Company. Construction, led by Bradfield, began in 1926 and was completed six years later.

The construction of the bridge proved to be a technically and organizationally daunting task. In order not to disturb the functioning of the port it was decided to use the cantilever method, moving from the piers towards the central part. The strength test of the bridge was carried out in February 1932 with 96 steam locomotives.

So in 1932 the Harbor Bridge was opened, and by the time construction was completed it had cost $20 million.

Today, motorists traveling to Sydney’s South Side pay a $2 toll, covering the cost of maintaining the bridge. The pylon of the bridge closest to the Sydney Opera House is open to the public. The observation deck offers a circular panorama of Sydney and is an ideal place to take photos and videos.

Harbour Bridge – one of Sydney’s landmarks 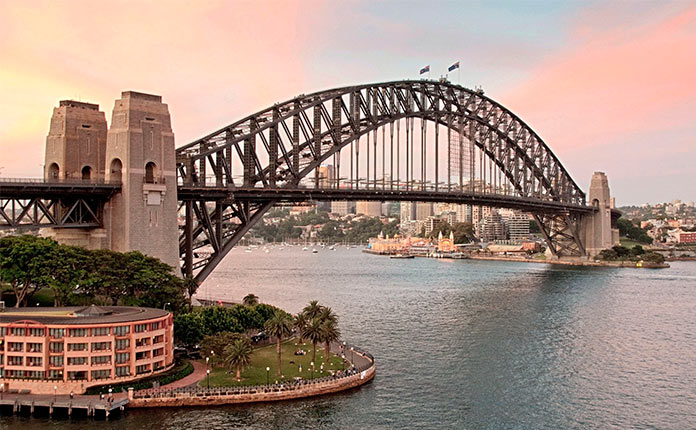 The Harbour Bridge in Australia is one of the five most visited landmarks in Australia. The bridge is the largest on the continent. It was put into operation in 1932 and was erected to connect the business part of the city and the center. The bridge is divided into 8 car lanes, 2 railroad lanes and one bicycle lane. Harbor Bridge was built over 6 years and spent $ 20 million on construction. Its width is 49 meters and its length is 1149 meters. The entire structure weighs a total of 53 thousand tons.

Where is the Harbor Bridge

Sydney Harbour Bridge is located in the heart of the city. Nearby are the Sydney Opera House and the harbor. All city tours are conducted with a “Sydney Bridge” stop, so you won’t be able to miss it. If you are going to take a cab, give the driver the address Sydney Harbour Bridge, Sydney NSW, and they will take you to the landmark. You can also get to the bridge by train.

Before construction began, the local government considered various options for 50 years. In the end, it was announced the competition for the best project, which was presented to 20 works. Among all of them chose the most worthy option and undertook to translate it into reality. The idea of John Bradfield was chosen as the best. He took over the duties of chief engineer.

The construction of the largest bridge in Australia started in 1926, and it was officially opened in 1932. Thoughts about the need to connect the two parts of the city first appeared in 1888. At that time a commission was created, which considered proposals from architects for the construction of the bridge. 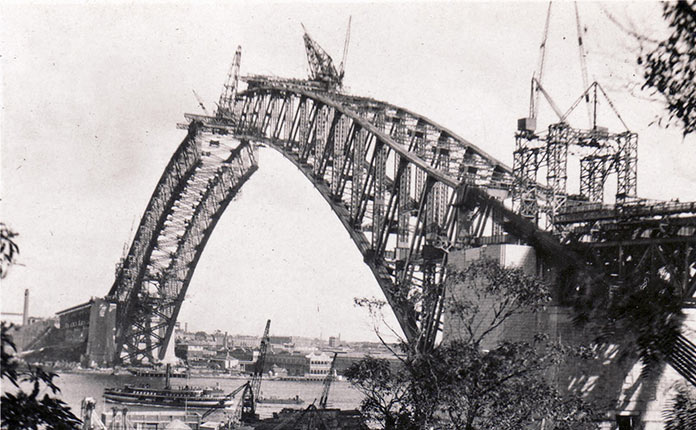 Seeing the Harbor Bridge, photos of the construction of which are striking, you can conclude that the implementation of the project in those days was quite difficult, especially since an important task was to keep the port functioning. It was necessary to involve a lot of special equipment and a large number of workers. The frame of the bridge is a metal lattice with an arch, on which the railway tunnel is located. The arch has a span of 503 meters. The weight of the arch is 39,000 tons, while the entire bridge weighs over 50,000 tons. 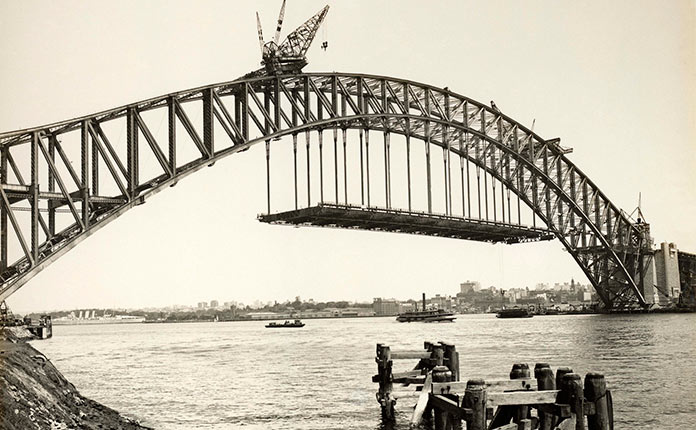 Did you know? In hot summer weather the height of the structure can increase by up to 18 cm due to the ability of the metal to expand at high temperatures.

The Harbor Bridge has a modern design. The huge arched structure is popularly known as a “hanger”. The bridge stands on four 100-meter concrete piers, and the arch is made entirely of metal. 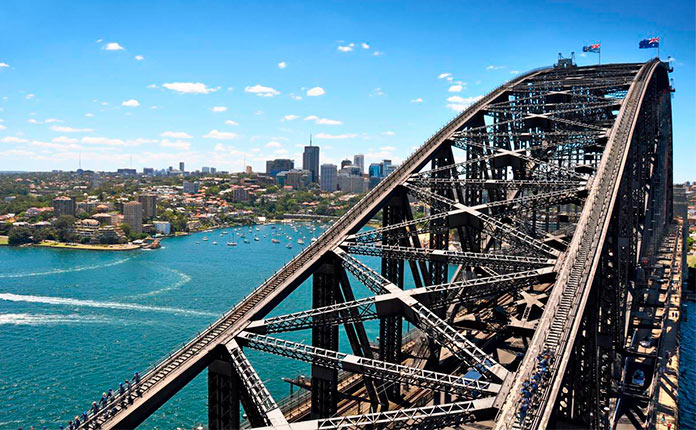 Looking at the pages of wikipedia, you can find many interesting facts about the Sydney Bridge.

This is interesting. The people of Australia call the Harbor Bridge “the hanger.” This name came from the shape of the bridge itself and its construction.

You can see the bridge at any time of day, but it is most beautiful here at dawn. Travel on it and the excursions are paid.

To cross the bridge in a private vehicle, you have to pay $2. If you want to go up to the observation deck and enjoy a great view of the city, you have to pay $ 198 at night, 235 during the day, and 308 at dawn. While it’s not cheap, it’s well worth it. The bird’s-eye view makes for some beautiful photos.

In addition to the Sydney Bridge, there are many other sights to see in the city. To get a list of things to see and do, read the reviews of other tourists who’ve been to Australia before.

If you like to travel, you should definitely visit the most popular attractions in Australia. The Harbor Bridge cannot go unnoticed, as it is located in the heart of the capital and holds the title of the largest arched bridge in the world.

What do you think? Is it worth the trip to Sydney to see one of the most beautiful bridges in the world?