China is an amazing country that is known throughout the world for its unique culture. On its territory there are many unique natural and architectural monuments. This article will introduce you to one of these places. According to the beliefs of the Chinese people, this mountain is a sacred place. Here you can get as close to heaven as possible, and get the blessing of higher powers. People constantly come here in order to visit the temple, to climb to the amazing cave and walk on the amazing hanging trail of glass.

It is located in Hunan province. The cave was formed due to erosion processes. The height of the mountain is 1519 meters. Coordinates: 29 °03’04.3″N. 110°29’02.3″E. What is the fame of the area? The fact that on its territory there is a cave and a miracle of engineering architecture – the trail of glass.

Ancient chronicles indicate that the cave appeared in 263 AD due to the collapse of the rock. Its length is sixty meters, width – fifty seven meters, height – one hundred and thirty one meters. The cave has gained its popularity due to the fact that near it one gets the impression of being as close to the sky as possible. It’s all about the thick clouds that gather over the top.

Many local residents consider the mountain one of the most sacred places in the country. According to legend, the mountain is associated with the sky, and has great power. In the annals you can find records that indicate that mysterious events took place on the mountain at different times. In the twentieth century, four miracles occurred on the mountain, which shocked the specialists who observed them. For example, in 1949, when the People’s Republic of China emerged, a powerful waterfall gushed from the top, which lasted only fifteen minutes. Such phenomena occurred before all the important events in the country. Not only unexplained natural phenomena are associated with the mountain, but also the legends of the local residents. According to legend, somewhere on the mountain there are hidden priceless treasures: a large amount of gold, silver, jewelry. It was hidden on the mountain by a peasant during the rebellion against the Ming dynasty. Exploratory expeditions were sent to the mountain many times, but they never managed to find anything.

There are three ways to climb the mountain. The first is the easiest, a cable car ride. Have to climb for a long time, as cable car to the mountain listed in the Guinness Book of Records, and is considered the longest on the planet. The length of the road is seven and a half kilometers. Most of the way stretches across a long chasm. Those looking for a thrill can climb to the top by car or on foot. The highway to the mountain has its name “road of 99 turns”. It can be climbed on foot. The road is eleven kilometers long, and there are actually ninety-nine turns on it. The complex highway was built in just eight years. People who climb the mountain on foot must overcome not only many turns, but also 999 steps. This is because the number nine has a special place in Chinese culture. Those people who have climbed to the top do not have the strength to go down at all. Therefore, it is possible to go back down by bus. The journey by car is not easy either, because the steep turns are only two hundred meters apart.

The glass gallery above the abyss

It is a unique human creation. It is a narrow path of glass at the very cliff. The rock in this place is very smooth, there are not even small ledges to grasp. Not everyone dares to approach the edge, but only the most adventurous hikers. The glass is only six centimeters thick, which is why many people, after stepping on the path, immediately get off. The condition of the road is constantly monitored by workers and cleaned of dirt and dust. This gives the impression that you are walking in the air, not on the road. To move on the glass road is possible only by wearing special cloth shoe covers. All this is done in order to keep the trail clean. Caretakers speak fluent English, so tourists do not have any problems during communication. Before a person is about to enter the trail, he is warned that it is better not to look down, so as not to test the nervous system. There have been cases where people have lost consciousness in the middle of the trail out of fear.

Those people who still dared to make the dangerous journey and went all the way, there is a unique view of the beautiful scenery and beautiful stone pillars. These formations can be seen in the movie Avatar. The Glass Trail is currently recognized as the scariest attraction on the planet. In the world there is only one such place, Titlis Cliff Walk, in Switzerland. It is a suspension bridge at a height of 3 thousand meters. But unfortunately, this place is not popular among tourists.

On the mountain repeatedly occurred inexplicable phenomena. As a rule, they all occurred before any important event in the country. They were a kind of omen. Reasonable attempts to explain what is happening have not been found, which is why people attribute mystical features to the mountain. Repeatedly occurring waterfalls have no logical and natural explanation. There are no snow caps or water sources at the top of the mountain that would cause the waterfalls. Probably, and in truth, humanity has not reached a level of development to decipher the origin of all miracles. Local legends say that if a person walks the 999 steps to the “Gate to Heaven”, he will achieve enlightenment and become closer to God. The cableway consists of ninety-eight funicular carriages. Through an opening in the mountain “Heaven’s Gate” the American Jeb Corlis was able to fly at great speed. He jumped out of a helicopter at a height of one and a half kilometers and flew through the opening at a speed of 120 kilometers per hour. He was wearing a special suit of his own design, thanks to which he was able to glide with ease. It was the only act of its kind.

Visit an amazing mountain, and get a lot of thrills and a good dose of adrenaline.

Only mountains can be better than mountains. Vysotsky’s famous phrase could have ended with the words “in which there are caves and arches. Both mountains and caves have always attracted man. Natural arches in the rocks look especially beautiful. These include the famous El Arco in Mexico and the Azure Window of Malta. But these are all mountain formations located at sea level. Is it beautiful? Of course it is.

Now imagine a huge arch high up in the mountains. A kind of giant hole in the rock. That’s exactly the kind of “window” we have in Tianmen Mountain. Located in the northwestern part of the Chinese province Hunan, in the territory of the park Tianmen of the same name. The most famous name of this natural masterpiece is Heaven’s Gate. 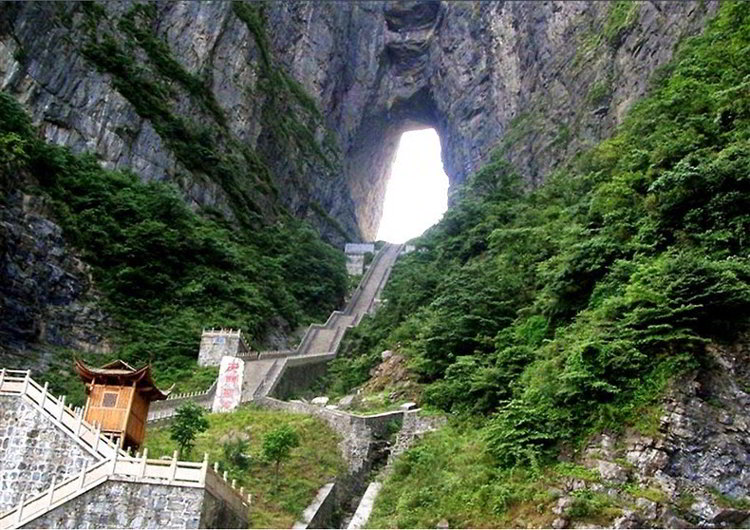 Heavenly Gate on the map 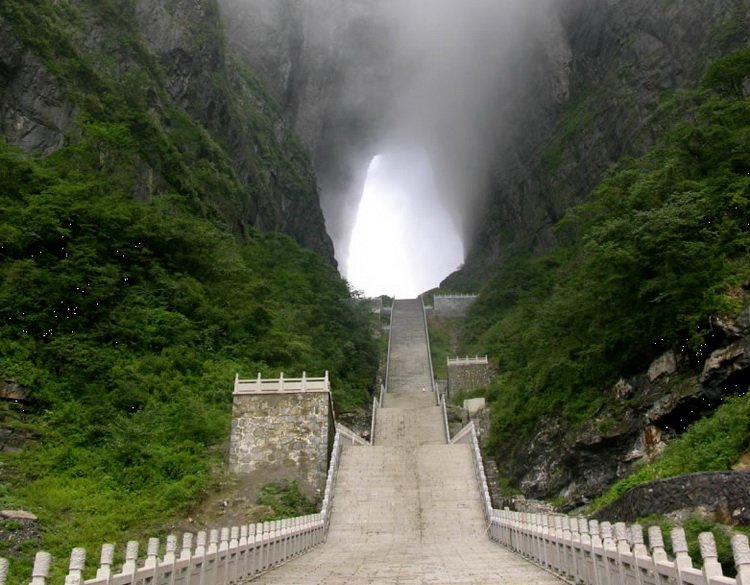 You can of course hear other names for this wonder – Paradise Gate, Gate to Heaven, Tianmen Cave. And some residents of the Celestial Empire call it the Magic Cave of Western Hunan.

The opening arose a long time ago, and the reason here is not at all in the erosion of rocks or washout of rocks by thousands of years of water flows. The Chinese since ancient times are chronicles, so it is known with certainty that the Heavenly Gate arose in 263 AD as a result of an earthquake. Underground tremors led to the fact that a large piece of rock just fell off, creating such an interesting arch. The opening in the rock is amazing in its size.

The Heaven’s Gate in numbers.

The enchantment of Tianmen Mountain and its surroundings is crowned by the majestic and fabulous arch. The impressions of its contemplation are unreal. Since ancient times, the locals have given both the mountain and the arch supernatural properties. A halo of mysticism accompanies you on your way to the Gates of Paradise. Especially when clouds of mist float through the opening and you climb the 999 steps up. Yes, that’s how many steps lead to the top of the mountain directly to the arch.

This attraction in China attracts many tourists from all corners of our planet. There are several ways to get to Heaven’s Gate and the 999 steps are just the final step.

So, the fastest and easiest way to the arch is a cable car length of 7455 meters. The altitude difference on this way is exactly 1279 meters, the maximum angle of ascent is 37 degrees, and the length of some spans of the road is about 500 meters. 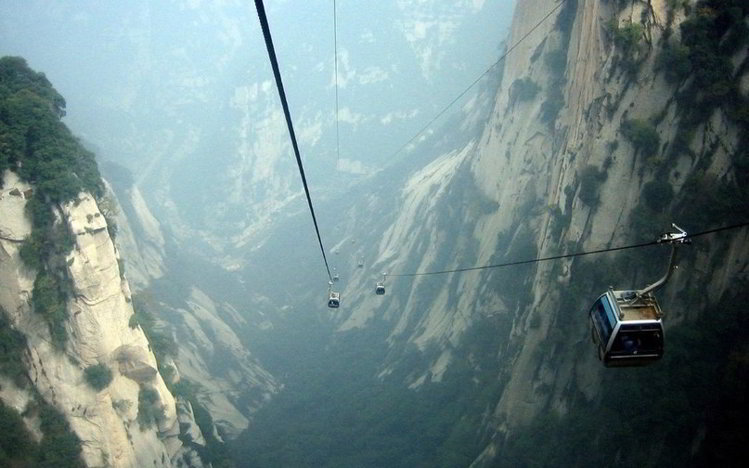 This path is recommended to lazy people who value their time and love to contemplate the insanely beautiful views of the surrounding area. By the way, the Guinness Book of Records considers it the longest high-altitude cable car on Earth. At the very top of this road is a Buddhist temple, built during the Tang dynasty. 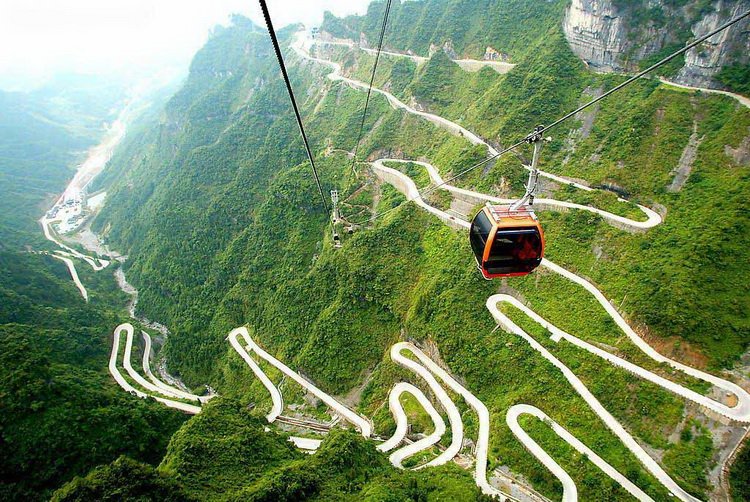 The second route is longer and more difficult. It is 11 kilometers on the road Tuntian, also called “road 99 turns”. This way is recognized as one of the steepest mountain serpentines in the world. And it is actually exactly 99 turns. 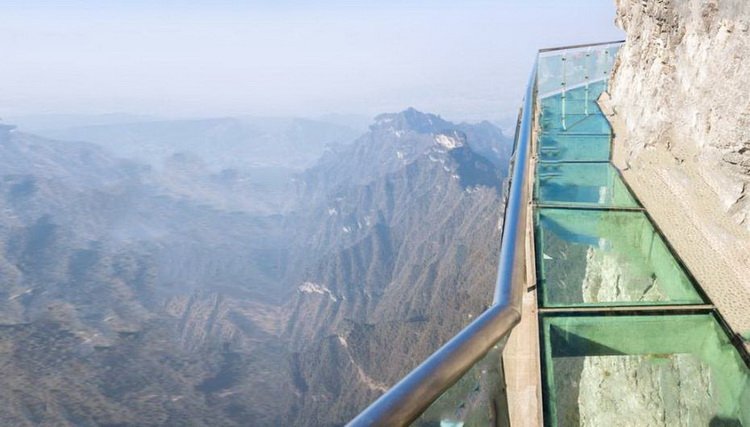 Tourists can also take an interesting trail that winds around the mountain, some parts of which have glass decks, just like the famous glass bridge of Heroes. But if you’re afraid of heights, this trail is best avoided.

Have you noticed how often the number 9 is mentioned? This is for a reason: in Chinese Taoist philosophy, this number is considered the highest and the last one that a person can understand and accept. The number 9 is also the symbol of the Emperor.

To comprehend at least a small part of Chinese philosophy and one’s own inner world, one must walk all the way from beginning to end, preferably on foot. Not everyone can do that.