Henderson Island is the dirtiest uninhabited island on the planet

The remote island of Henderson is located about halfway between New Zealand and Chile in the South Pacific. It is one of the five islands that make up the Pitcairn Island Group. It was here, in 1789, that mutineers from the ship HMS Bounty sought refuge, eventually settling on Pitcairn Island, about 195 kilometers from Henderson.

Henderson Island (also known as San Juan Bautista and Elizabeth Island) is an uninhabited coral island in the Pacific Ocean. It was annexed to the Pitcairn Islands in 1902 and is now a British Overseas Territory in the Pacific.

The size of the island is 9.6 by 5.1 kilometers. Its surface area is 37.3 km2 . It has poor soil and little fresh water and is therefore unsuitable for agriculture and human habitation. There is only one known source of drinking water, a small brackish spring on the northern shore. There are three beaches at the northern tip, and the rest of the coast consists of steep cliffs up to 15 meters high.

Because of the island’s remoteness from the continents, several endemic plant and animal species are present here. 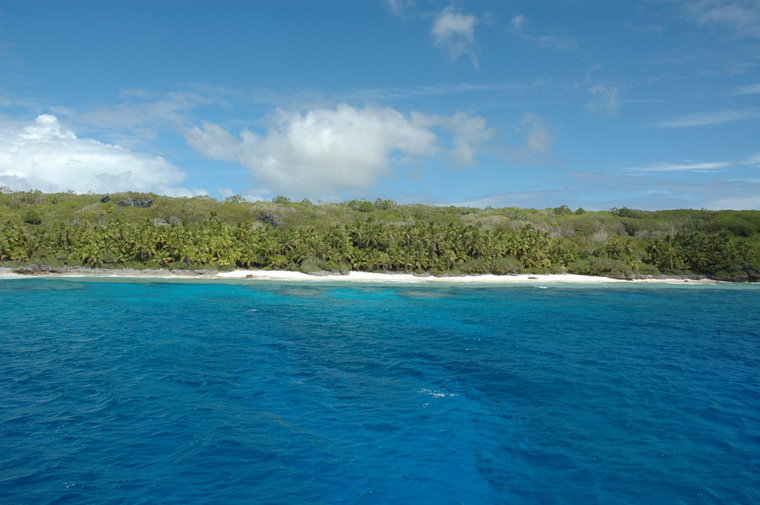 This is what Henderson Island looks like from a distance

Where is Henderson Island

Henderson Island is located in the South Pacific about 2000 kilometers north of Point Nemo. By the way, don’t forget to read about Point Nemo, which is the real space graveyard.

There are no settlements or aborigines on Henderson Island. It is rarely visited by scientists, and even more rarely by tourists.

The Portuguese navigator Pedro Fernandes de Queiroz, leading a Spanish expedition, was the first European to discover the island on January 29, 1606, and named it San Juan Bautista.

Henderson, captain of the British East India Company ship Hercules, rediscovered the island on January 17, 1819, and named it after himself.

On March 2, 1819, the captain of the ship Elizabeth Henry King landed on the island and scratched the name of his ship on a tree as a mark. Therefore, it is sometimes called Elizabeth Island. But still stuck to the second name.

What is Henderson Island famous for?

UNESCO claims that Henderson is one of the last corners of the planet untouched by man. But what should have been gorgeous, sandy beaches are littered with trash. Fishing nets and floats, plastic bottles and assorted plastic debris dot the island’s beautiful beaches. 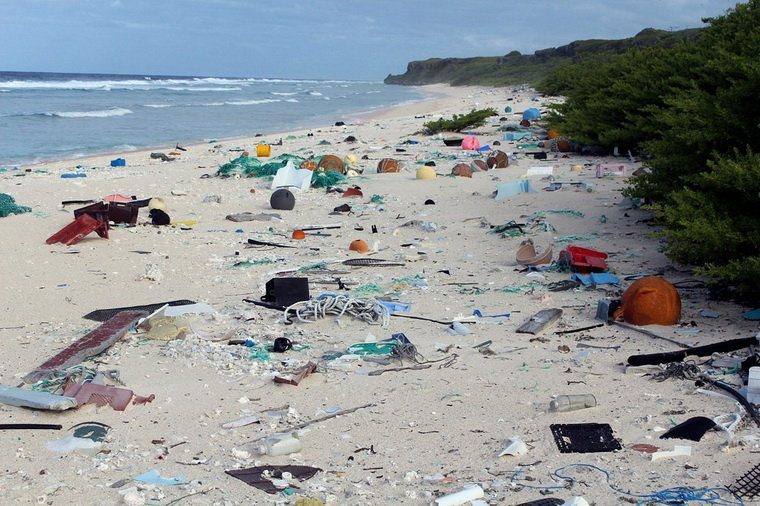 Researchers estimate that about 38 million pieces of plastic, weighing about 18 tons, are scattered along the coastal strip. Most of the debris (about 68%) is not even visible, as it is hidden by the sand. Each square meter of Henderson’s beaches contains 20 to 670 pieces of plastic on the surface and 50 to 4,500 pieces in the upper layers of sand. Each day, about 3,750 new pieces of trash are washed up on the island’s northern beach. If these scientists’ estimates are correct, then Henderson Island has the highest density of plastic trash in the world. 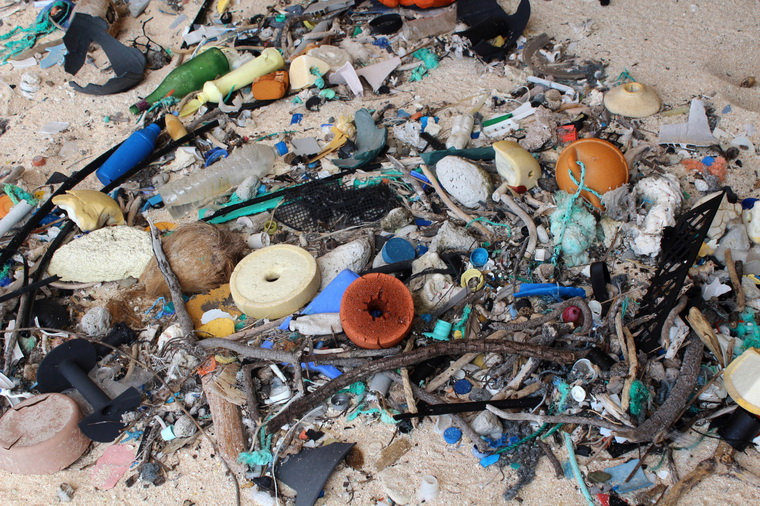 Who littered on Henderson Island?

And therein lies the main oddity of the island. Virtually no humans have set foot on Henderson, there is no population, no tourists either. So where did all this trash come from?

There is no doubt that this is the consequence of destructive human activity. Think at least about the trash island Tilafushi. The one in the Maldives, next to the beautiful islands, where wealthy tourists bask in the warm tropical sun. It’s understandable where the trash comes from. But how did the plastic get to Henderson, such a remote and uninhabited island?

The fact is that the island is on the edge of the South Pacific and a large circulating ocean current circulating between Australia and South America, bounded by the equator. This circular current draws debris from all over the South Pacific and distant continents and carries it to Henderson’s shore. A similar phenomenon is seen in the Northern Hemisphere, where plastic from all over the North Pacific washes up on Hawaii’s Kamilo Beach.

Jennifer Lavers of the University of Tasmania, who is leading the research, has traced the sources of trash deposited on the shores of Henderson Island from 24 different countries from all continents. 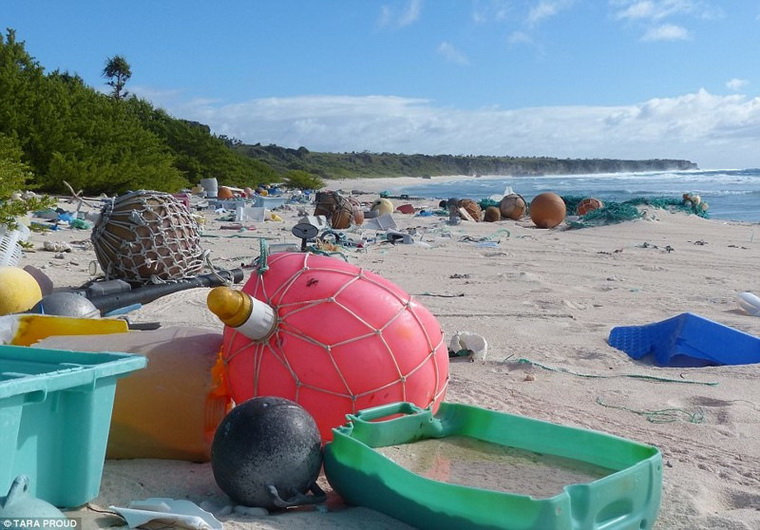 Once plastic is carried onto the island, the sun’s ultraviolet radiation makes the plastic brittle. It gradually disintegrates into hundreds or even thousands of pieces, sometimes even less than 2 millimeters across. They mix with the sand and become part of the island. Naturally, this poses a significant threat to the ecosystem of the island.

To make you not so sad, let us remind you that nature sometimes makes incredible masterpieces out of garbage. For example, the famous Glass Beach in California.

38 million pieces of plastic. What does the dirtiest island on the planet look like?

According to the UNESCO scientists this island is one of the last corners of our planet untouched by man. A small, beautiful island in the Pacific Ocean with a mild climate and sandy beaches. But what’s wrong? Trash. It’s everywhere here – on the golden sand, in the coastal surf, on the green grass. There is so much trash that it is layer upon layer covered with new portions of sand, hiding in its thickness. The name of this far from paradise is Henderson Island.

Located in the southern part of the Pacific Ocean, this island is nearly 5000 kilometers from the nearest continent. There are no permanent residents on it, scientists rarely come here and even less often visitors come to see a huge garbage dump in the middle of the ocean.

Henderson Island is a British Overseas Territory covering just 37 square kilometers. It can only be accessed from the northern side where there are gentle beaches and on the other three sides there are 15-metre high cliffs. People on the island have not lived and do not live due to lack of drinking water on it. There is only one spring for the entire island and it has slightly less salty water than the ocean.

But even for a short vacation on the beaches of Henderson Island, no one will have a chance. These beaches are littered with trash. Researchers estimate that there are about 38,000,000 pieces of trash scattered along the coastal strip. And it is not all on the surface, but mostly (70 percent) hidden in the sand. And every day the beach “arrives” about 4000 new fragments of garbage. If the findings of the researchers are correct (and they certainly calculated everything mathematically, not experimentally), the density of debris on Henderson Island is 670 fragments per square meter! That’s the highest density of human waste on our planet.

But there are no people on this island, so where did all this garbage come from? The fact is that the island is in the path of a huge rotating ocean current that circulates between Australia and South America. This circular current attracts all the trash of the southern hemisphere, and since Henderson is just in its path, all this mass of trash is thrown onto the shore of the unhappy island.

By the way, in the northern hemisphere also has its own circular current and exactly the same “unhappy” place, where all the garbage nestles. That’s Kamilo Beach, Hawaii. But Henderson Island is still superior to its northern neighbor. Probably because there is more trash in the southern hemisphere. And most likely, no one has ever cleaned it up here, unlike Hawaii, where people live.

Once the plastic is carried on the shore of the island, it is under the influence of the scorching sun, over time, it disintegrates into smaller fragments, some of which go under the sand, and partly scattered by the wind on land.

This is what Kamilo Beach in Hawaii looks like/ © dailymotion.com

Ironically, the dirtiest island on the planet is listed as a UNESCO World Heritage Site whose ecosystem is virtually untouched by man. A controversial statement, because all this garbage is the product of human activity. And how it poisons the environment is obvious to everyone, without any calculations and studies. The sad thing is that this island can not be saved or cleaned. After all, everything in the world has its price, and the price of the complete reclamation of the wretched island is very, very high. And that’s a pity.