Herberstein Castle is a medieval citadel from the 13th century. It stands among green gardens on a high rock and resembles a huge ship. During its history Herberstein has never been defeated by enemies and has always belonged to one noble family. 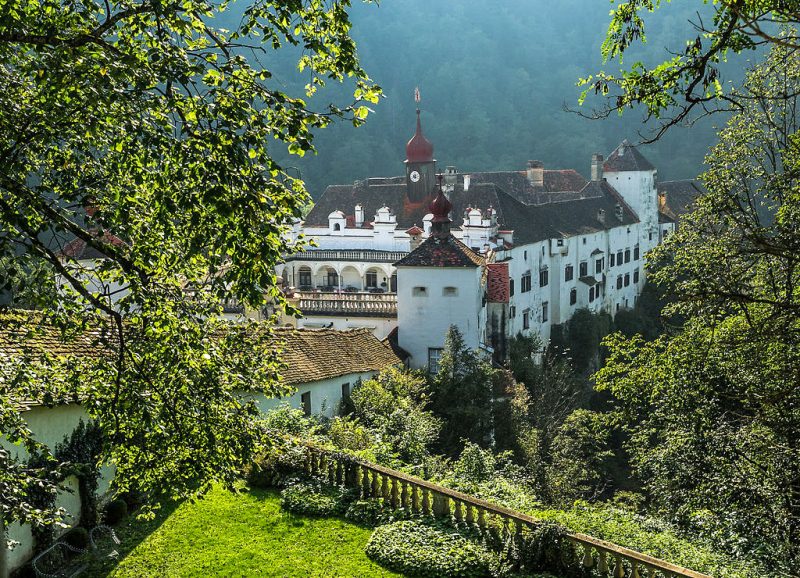 Schloss Herberstein remains to this day the impregnable, majestic and unconquerable castle of Styria. During all the time of its existence, and it is more than 8 centuries, there was no occasion, when it trembled under the onslaught of invaders, not a single step of the enemy set foot on its territory.

Sometimes the name of the castle is pronounced as Gerberstein.

The first references to the citadel date back to the 12th century. At that time it was a two-storey building with a spacious dining hall in the upper part and three arches on the first floor. The heyday of the castle began at the end of the XIII century, when it came into the possession of the Herberstein counts, a prominent Austrian dynasty of diplomats. 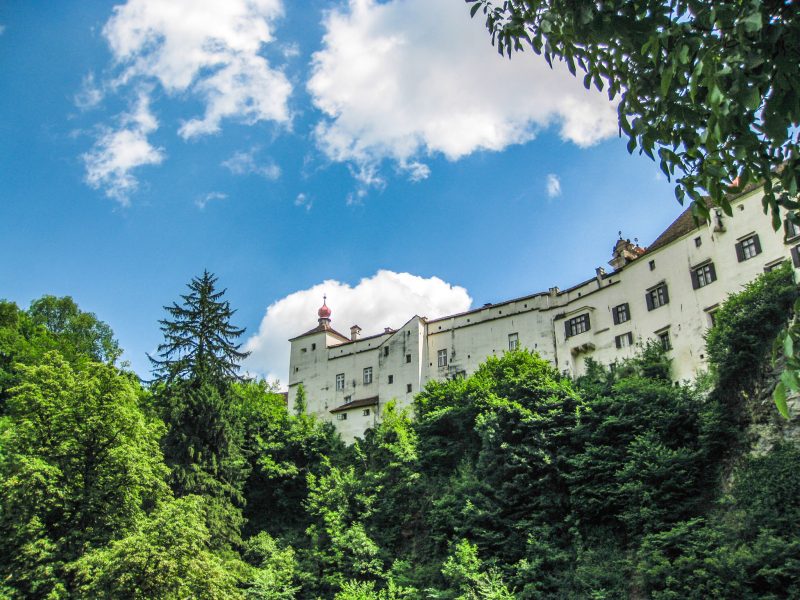 For four centuries the members of the family strengthened and expanded the family nest, giving its architectural appearance elements of different styles: openwork refinement of Gothic, Renaissance symmetry and spatial grandeur of the Baroque. 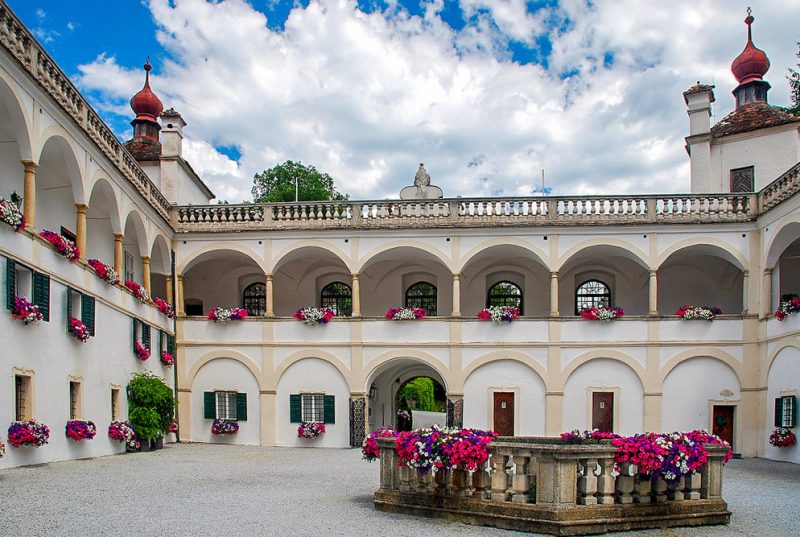 The beginning of the transformation was initiated by Otto Herberstein in 1300. An additional wall, a separate Bergfried Tower and a number of outbuildings were added to the castle grounds. St. Catherine’s Chapel, built in the Gothic style, decorated the castle at the end of the XIV century. During the XV-XVI centuries, the complex was steadily modernized: it was surrounded by a moat, the courtyard was expanded, the Knights’ Hall, casemates and the Cannon Tower were built.

The owners did not forget about the defense: the arsenal of the fortress kept a variety of cold steel weapons, grenades, as well as huge stocks of gunpowder.

The castle was finally completed in the 17th century, when the Saint George Chapel was built by Maximilian Herberstein, the gate decorated with the family coat of arms and the Florentine courtyard surrounded by two-storey arcades. 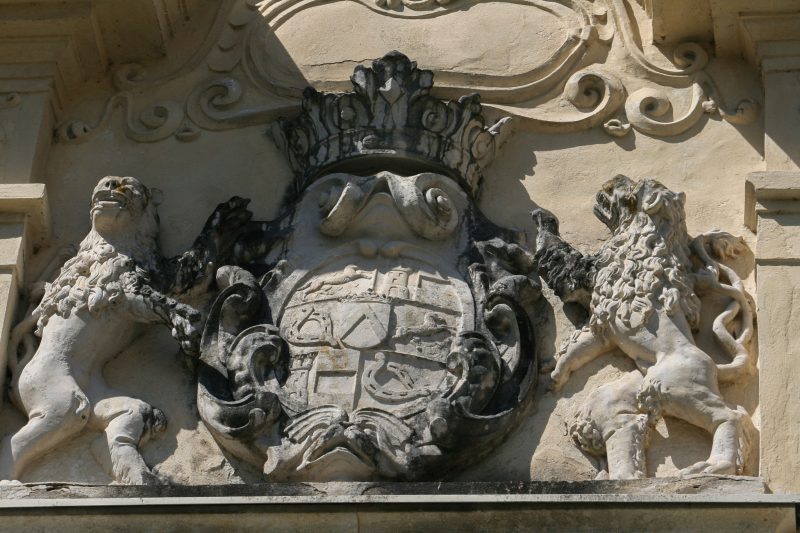 Coat of Arms above the entrance, photo by Wolfgang Baumann

All the structures of the complex are securely held by a stone slab, which serves as its natural foundation. The walls of the castle offer a colorful view of the surrounding forest and gorge.

The interior of the castle is as luxurious as its exterior. Visitors have the opportunity to see the magnificent state rooms, the arsenal, a gallery of family portraits, and exhibitions of Austrian art. 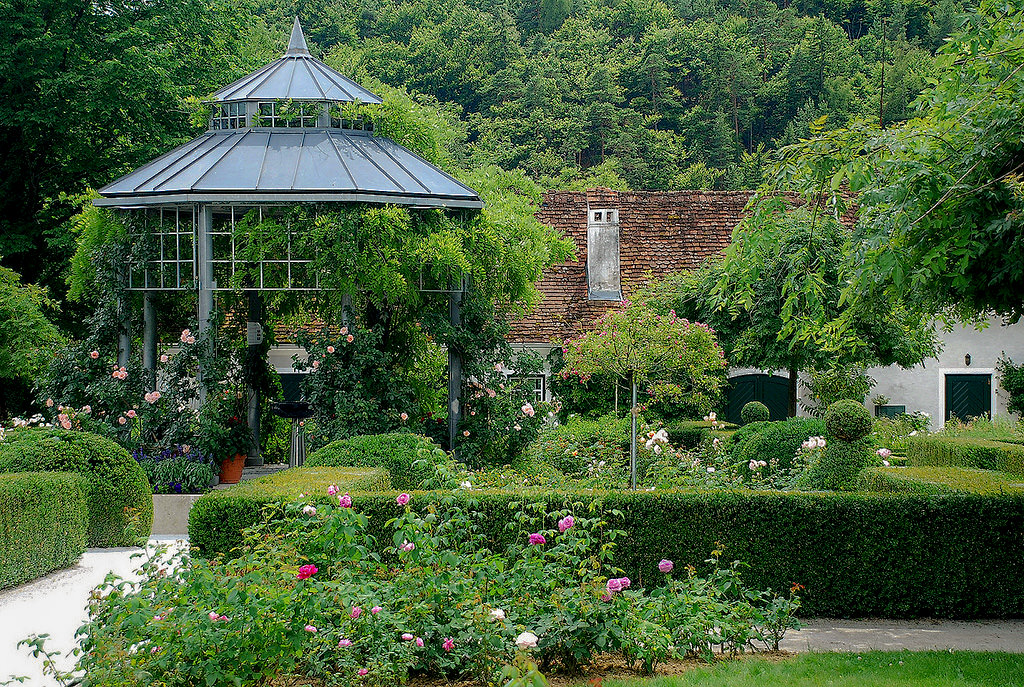 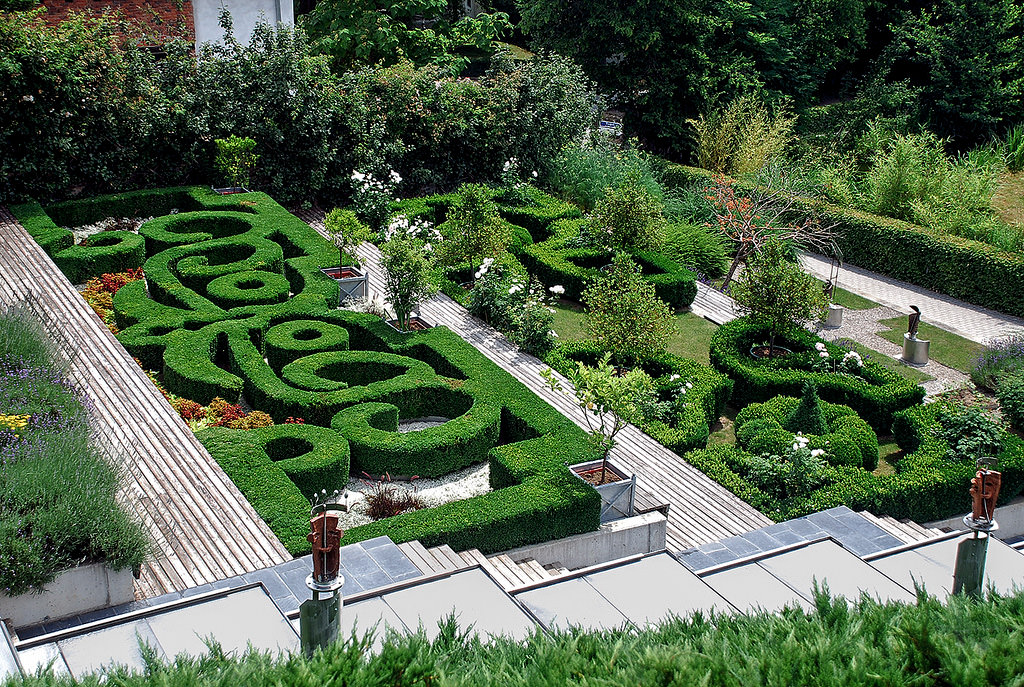 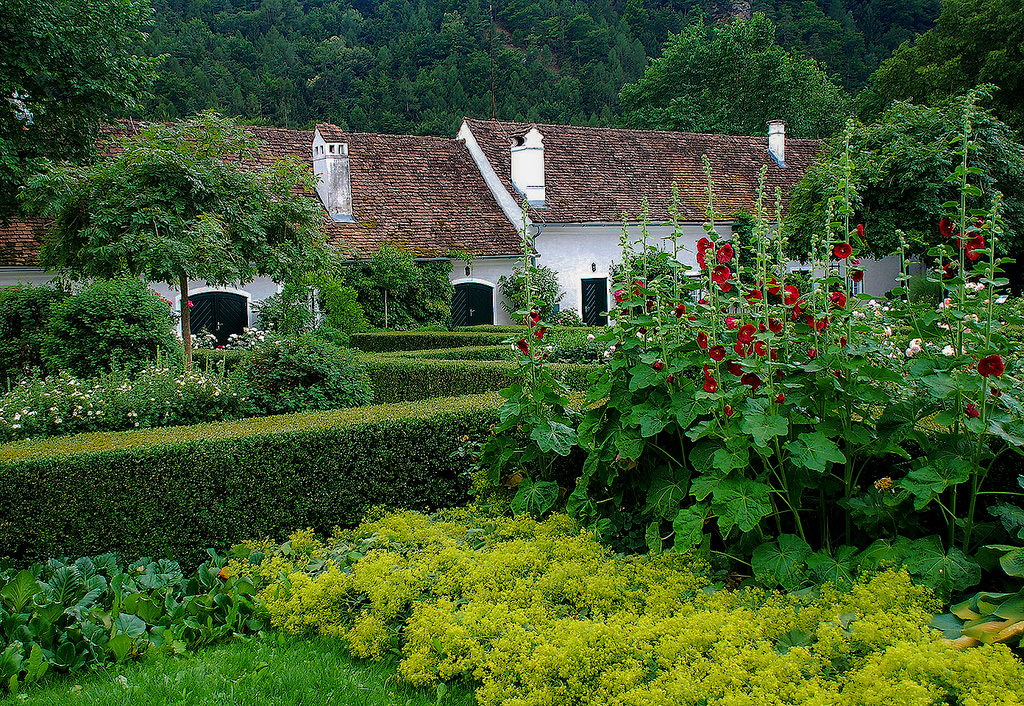 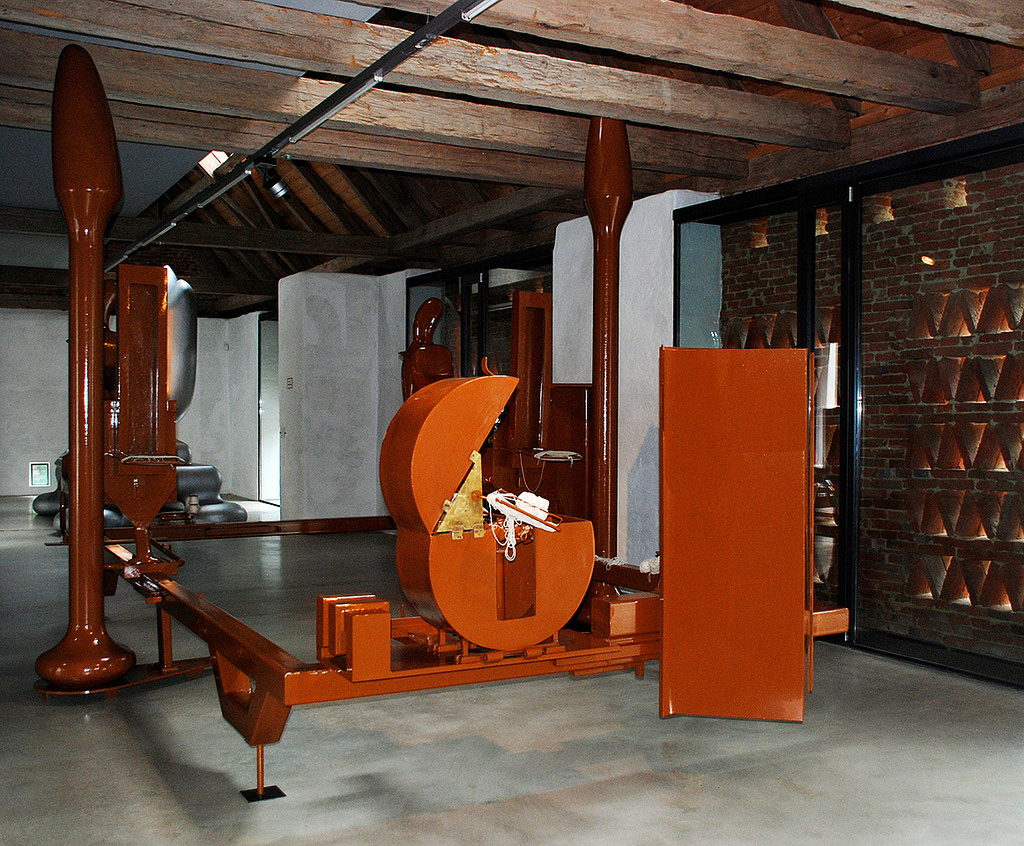 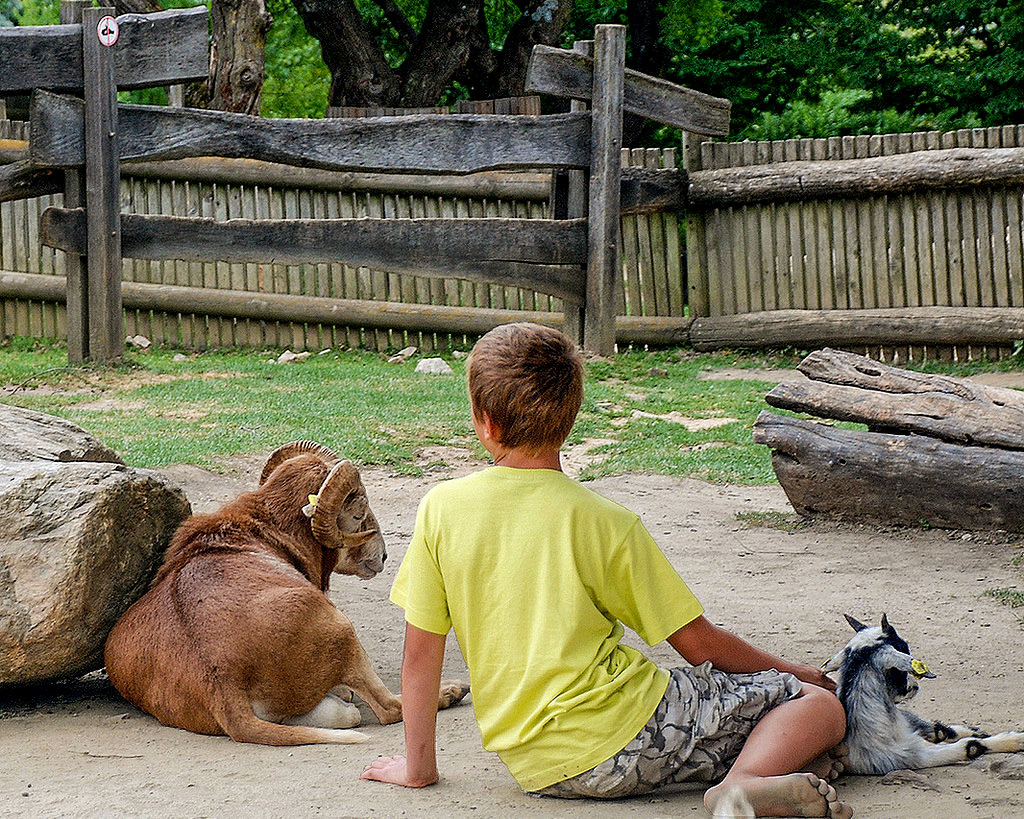 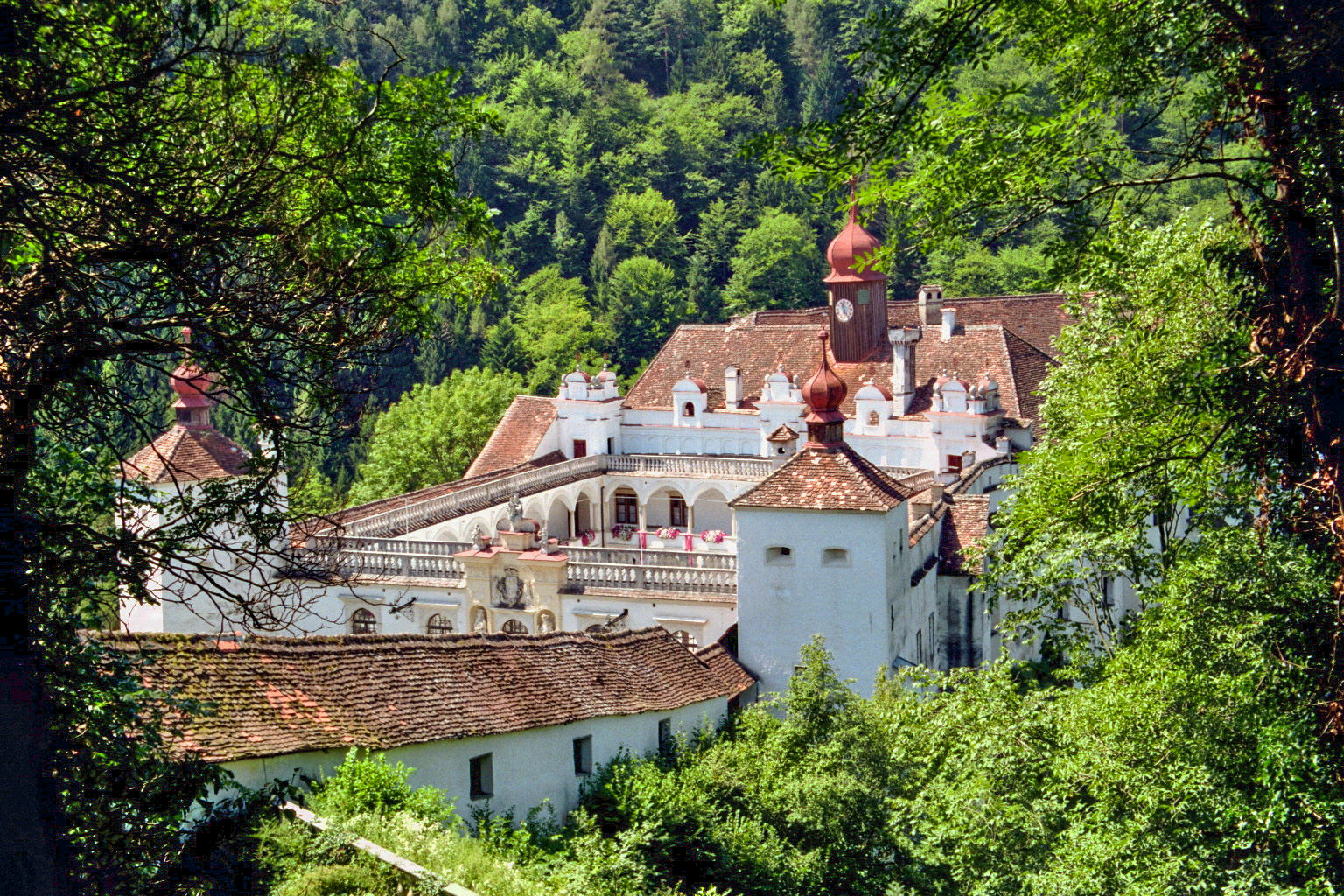 The fortress is literally bursting with flowers: there are 4 gardens, each of them corresponds to a certain era. Nearby is a park with the famous Pavilion of Roses and the zoo Tierwelt Herberstein, which has been operating since the 17th century and is home to many species from five continents. Find out the feeding times for the animals at tierwelt-herberstein.at.

In addition, the castle grounds are home to the Gironcolimuseum, which features works by contemporary Austrian artist and sculptor Bruno Gironcoli.

Hours of operation of the castle:

Ticket price includes all of the above: castle, gardens, zoo, rose garden, museum.

How to get to Herberstein Castle?

See the route from Graz or plan your route from another city on this page.

Herberstein Castle in Austria Part 1: The zoo, the rose garden, the park

During my and Natasha’s trip through eastern Austria, namely Styria, with an individual tour, we visited the unusual, but very beautiful, Austrian Castle Herberstein n (Schloss Herberstein). This castle is a fairly large complex, which includes a zoo with rare species of animals, a park-rosary, a castle building and various other outbuildings. It was especially nice to visit Herberstein Castle, because it belonged to the famous diplomat Siegfried Herberstein, who wrote the book about “Moscovia”. 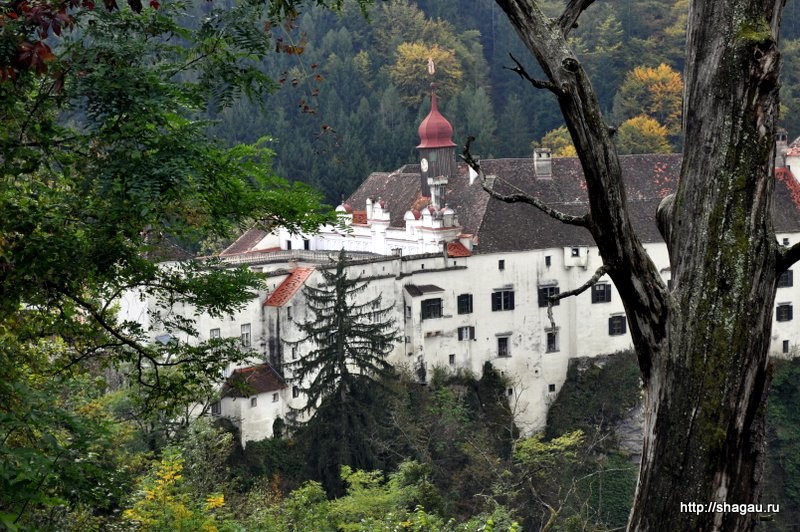 We spent a few days in October in Graz, Austria and planned to take several trips around Styria, in particular we were very interested in castles. It should be noted that in Graz tourism is not very developed, many castles are privately owned, and public transport does not go often, so we were faced with the need to buy tours of the suburbs. The Internet came to the rescue, where we found a Russian guide Taisia, who offered to go on a tour of the 9 castles of Styria. She offered us to join a group trip, which was enticingly called “The Road of the Castles of Styria. We could not deny ourselves this pleasure, despite the high cost (the individual trip cost us about 250 euros for two). The tour was very rich: we visited the small towns of Hartberg and Pölau, a private bakery, unique churches, and several castles. Two of them we got to know closely – Herberstein Castle and Riegersburg Castle. Today we will talk about the first of them.

Castle Herberstein was one of the “main courses” of our excursion. Its name translates from German as “Bitter Stone”, apparently because the castle building is located on a giant boulder. Construction of Herberstein Castle lasted about 400 years and that is why the whole architecture of this building is a mix of several styles, from Gothic to Baroque.

It is hard to call Herberstein Castle just a building – it is a whole complex with gardens and a zoo. The castle was built in the 12th century AD, and since the late 13th century, it became the residence of one of the famous diplomats of those times with his family – Heberstein. Hence the name of the castle. On weekdays there are a lot of tourists who want to see Herberstein Castle, which has never been touched by time, and all its buildings remained in their original state. However, in October, when we traveled through Styria, there were almost no tourists.

We started our tour of the Herberstein Castle grounds with the zoo. 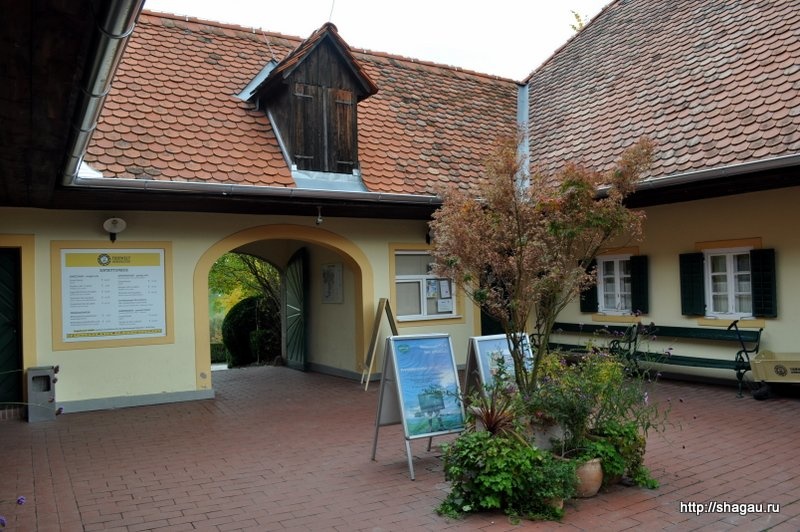 Entrance to the Zoo

The zoo at Herberstein Castle began operating in the 17th century and is home to animals and birds from all over the world. There are more than 1,000 animals – cougars, wolves, owls, cheetahs, Malay bears, zebras, llamas and many other rare and not-so-rare fauna. I liked the kangaroo the most, as far as exotic animals are concerned. But in general, the cutest were the little goats, who let themselves be petted, literally climbed on the hands and licked everyone’s hands. 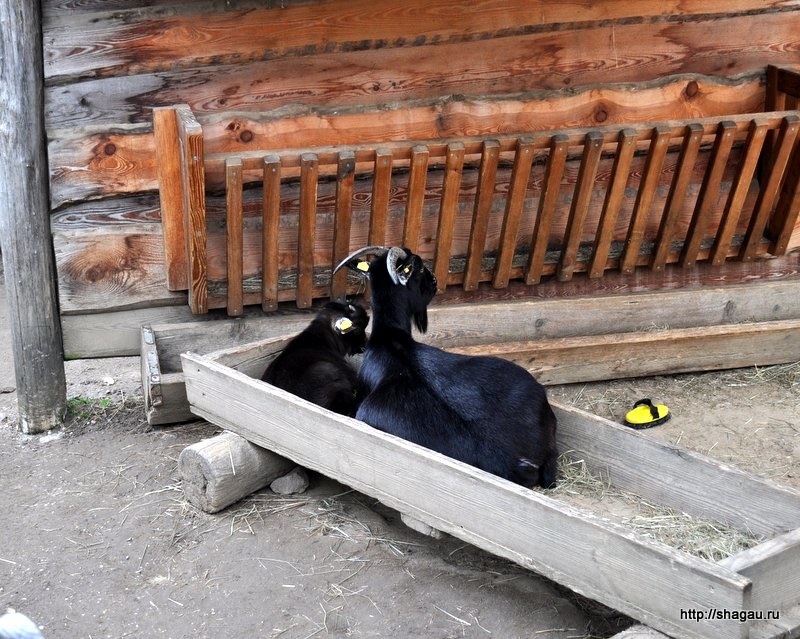 The zoo of the castle Heberstein is located on the territory of 40 hectares, and it is not so easy to walk around it during a short excursion. 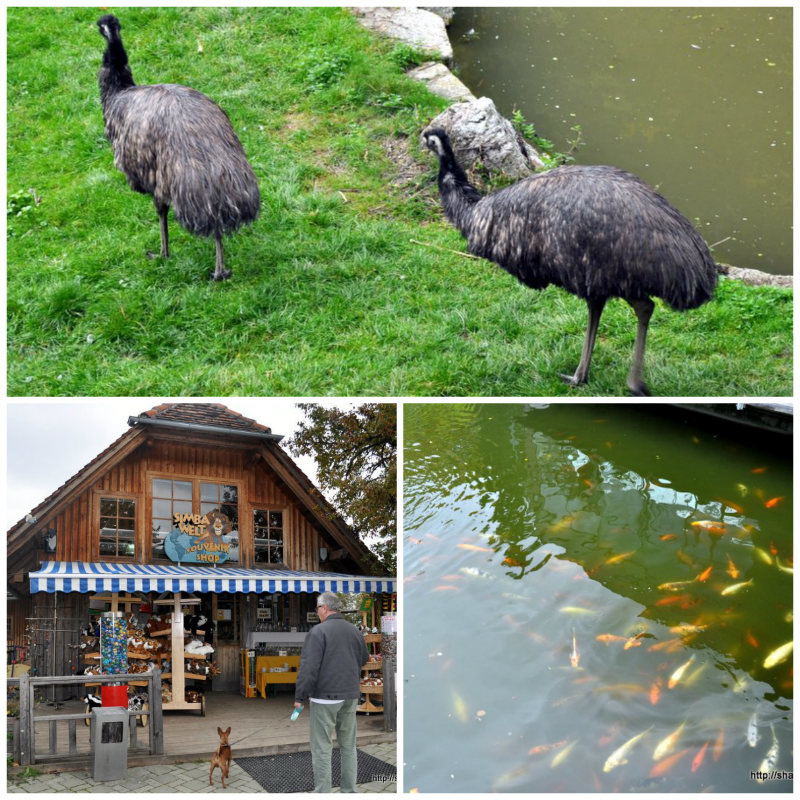 If you arm yourself with a map (which, by the way, is sold at the entrance), you can understand that the entire garden is divided into continents, and anyone can choose where to go and what wonderful animals to admire. The map shows Africa, Eurasia, and Europe, so you can safely get acquainted with cheetahs and deer, and even look at the polar wolves in one day. 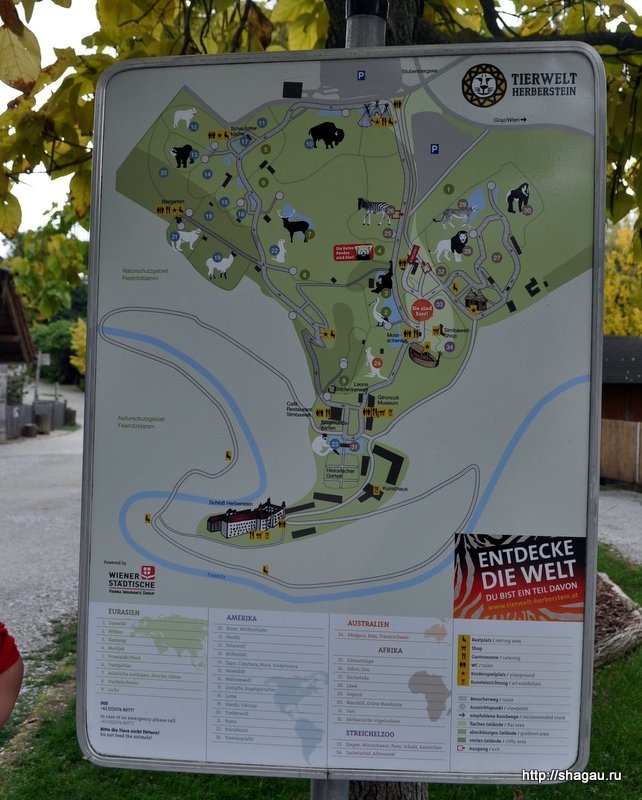 Map of the Herberstahn Zoo

Map of the Herberstahn Zoo

In the middle of the zoo is the nursery with monkeys that gallop effortlessly through lianas. You can get into the nursery by walking down the central alley. 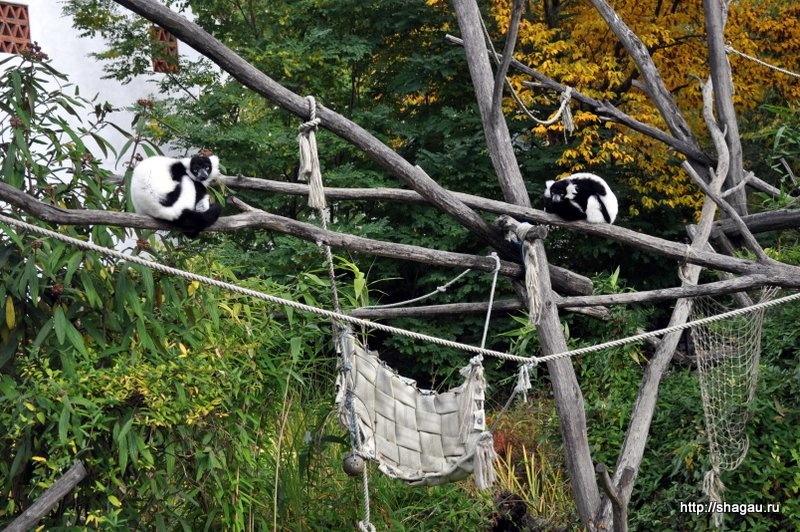 On the territory of the zoo grows apples, which, it seems, is not forbidden to try. At least our guide let us, so I can say for sure – the apples are just magical, fragrant and sweet. This is not surprising, because Styria is a real apple land, you will definitely see a lot of apple plantations, except that you should not pick apples there. Not all landlords are as generous as the Herbersteins. 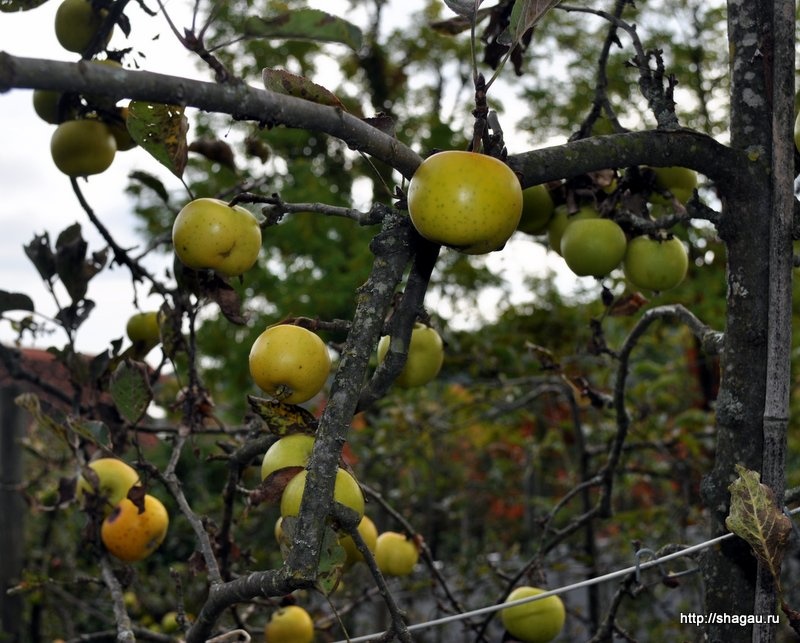 Herberstein Castle is still famous today for its gardens. The park complex includes the Rose Pavilion, and there are also several greenhouses and flower beds. 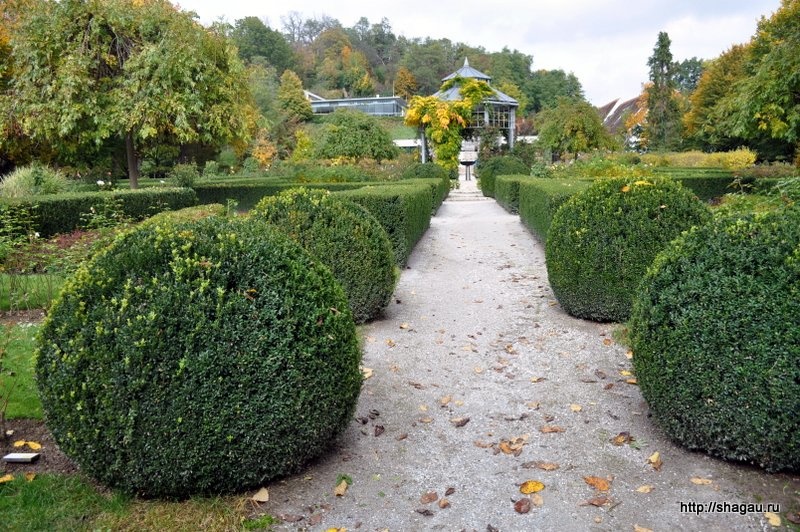 There are a huge number of flower species growing in the garden, you can even see unusual green roses. You can see that the park is lovingly cared for, the flowers are watered, because even during our short walk I managed to notice several gardeners who were working on the beds. 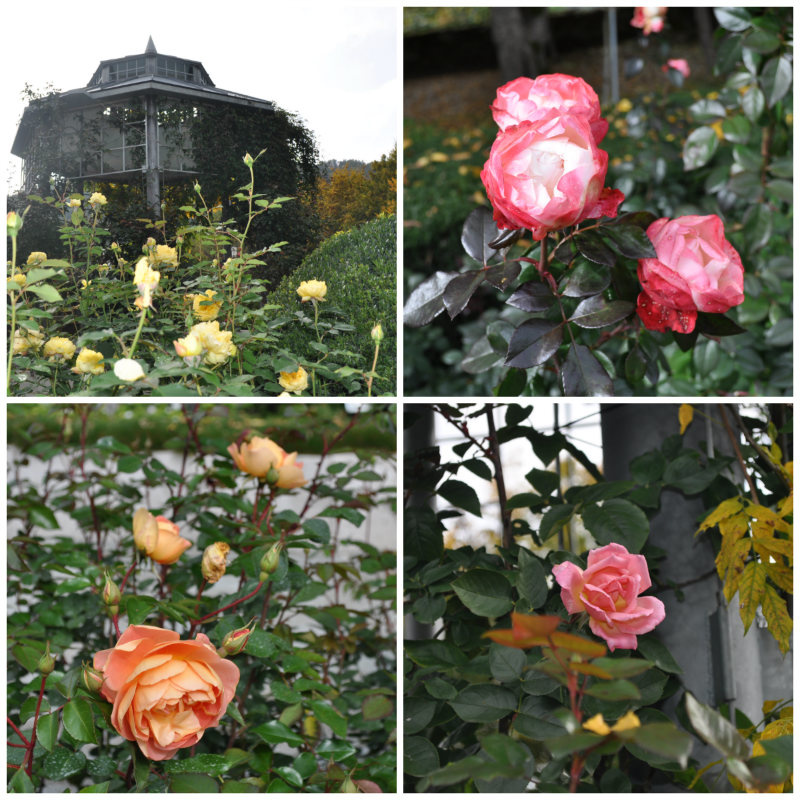 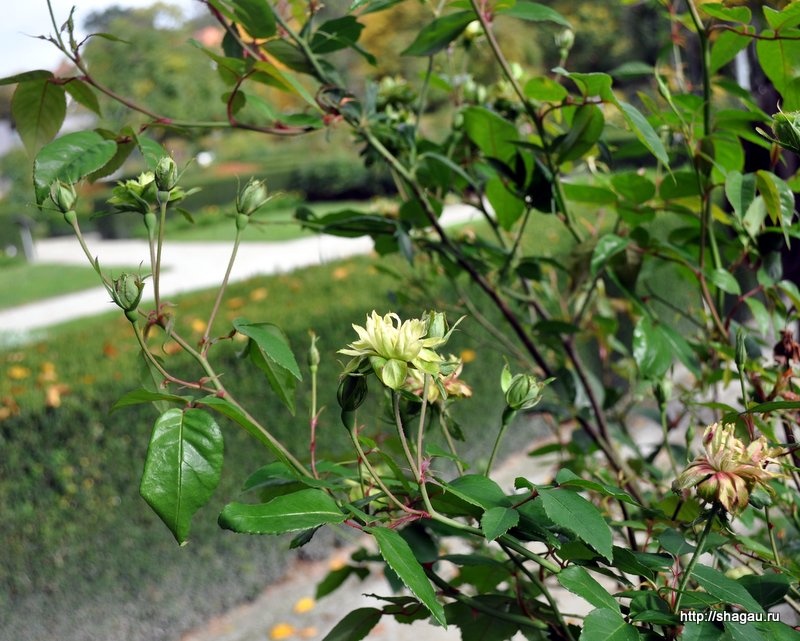 Opposite the rose garden you can admire the amazingly beautiful and rich Sigmund Gardens, whose landscape is unlike any other, and it is still better to see it with your own eyes than to hear the story from others. 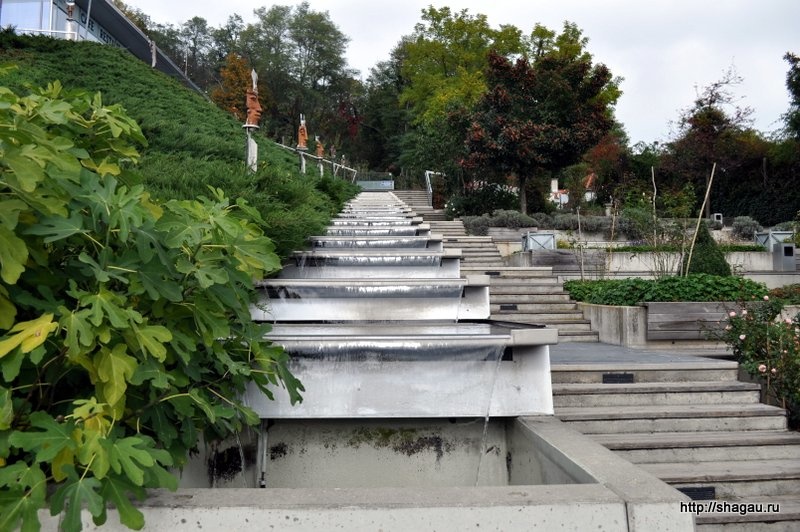 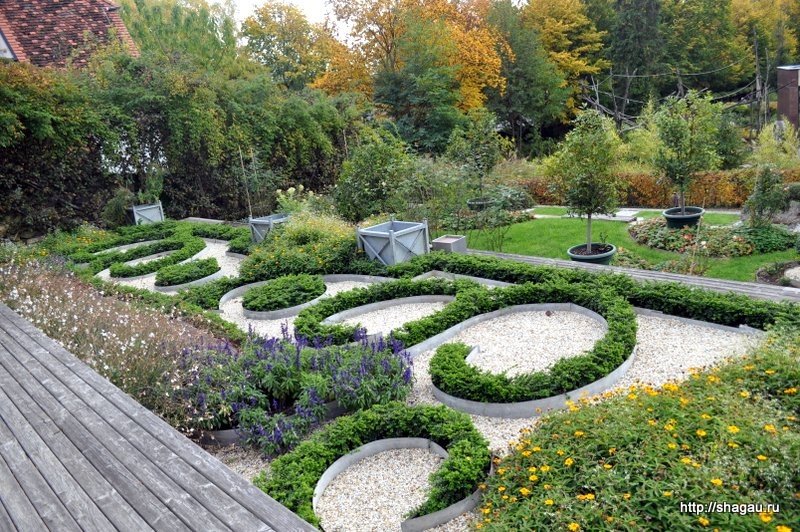 The guide showed us some interesting places with great views of Herberstein Castle. 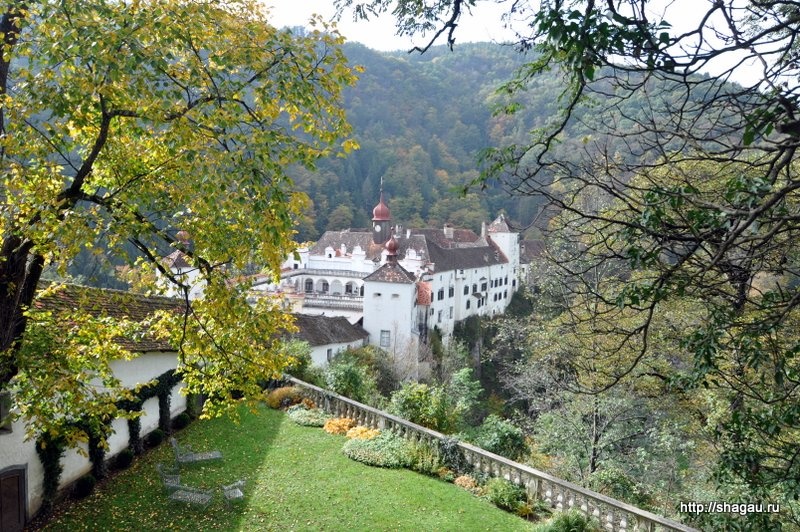 After seeing the park area we went to the castle itself. Interestingly, the castle itself is not, as usual, on a high rock, but in a low place. However, at the same time, it is inaccessible – there is a river on three sides. 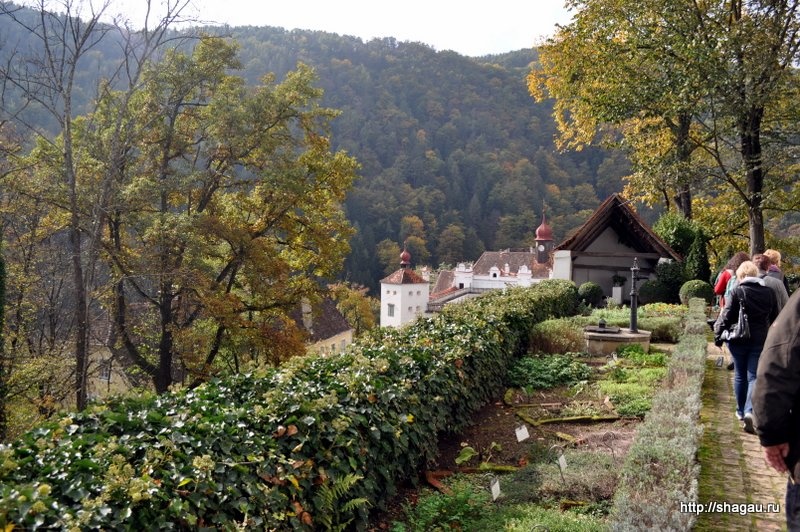 We are heading to Herberstein Castle

We are heading to Herberstein Castle.

The whole process was very mysterious, as our guide…opened the castle with her own key. She told us that the owner of the castle gave them away when she found out she was Russian. Thus, we were practically the only group in the castles. I generally had the impression that we came in from some back door, no secret entrance. 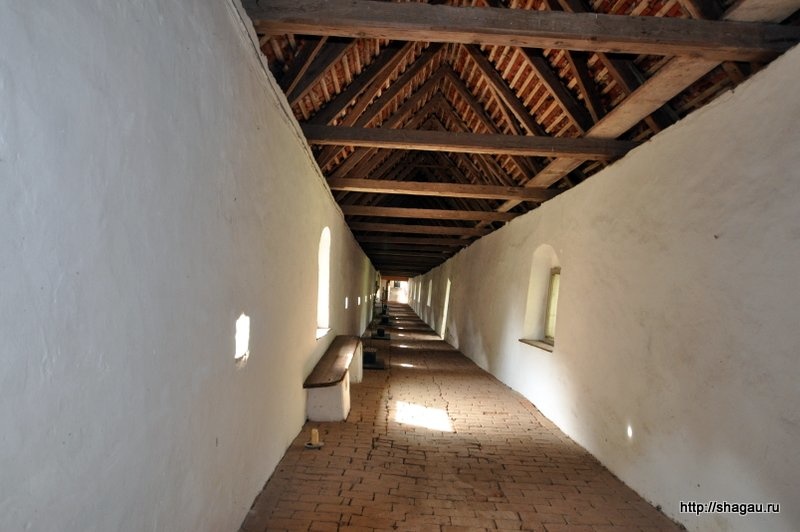 Co entrances to the castle

Co entrances to the castle.

From the windows of this long passageway we had a wonderful view of the castle buildings. 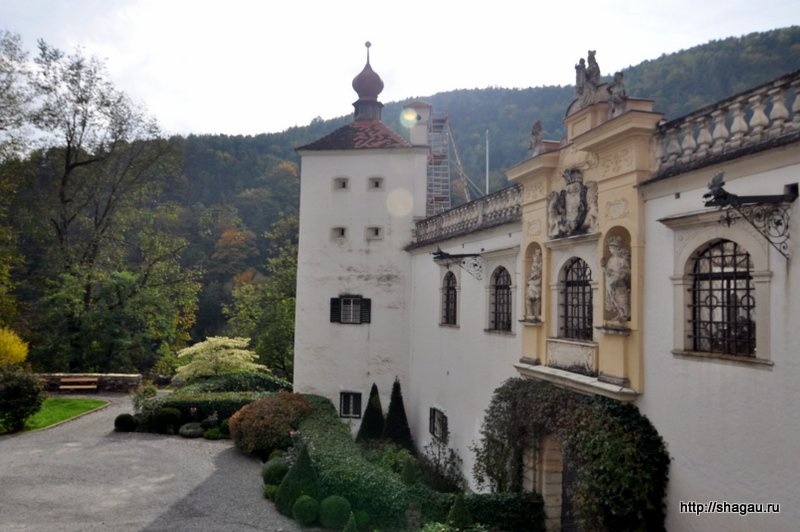 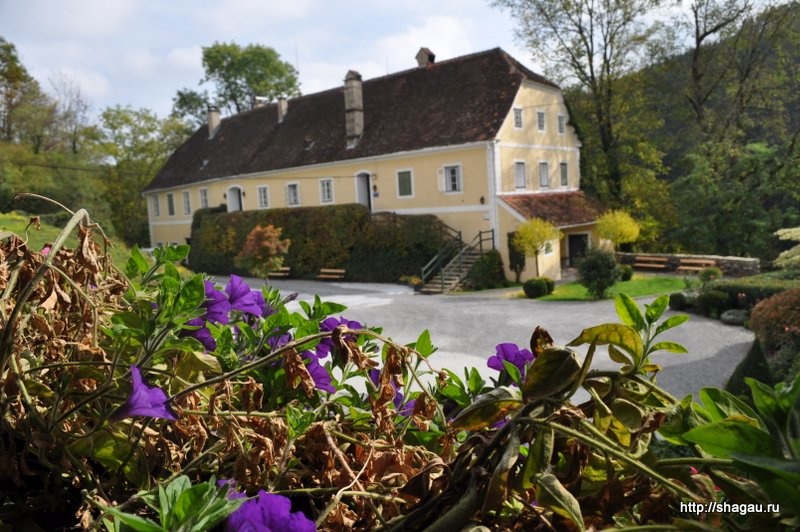 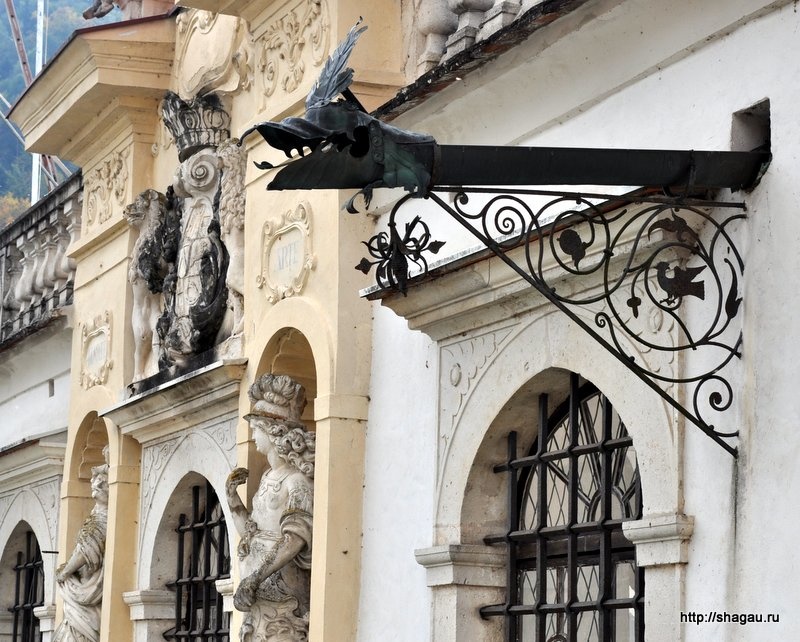 Plums in the form of knight’s armor

Plum trees in the form of knight’s armor

The rich greenery around the castle looks especially beautiful through the ancient grates. 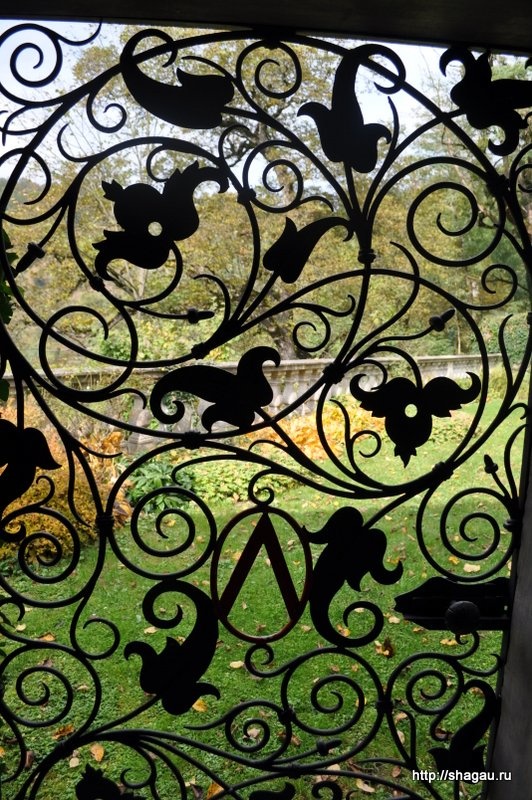 The lattices of Herberstein Castle

The lattices of Herberstein Castle

Upon entering the small ancient door, which creaked lazily as Taisia, opened the castle, we found ourselves in a stone corridor with windows that led to the main building of the castle. 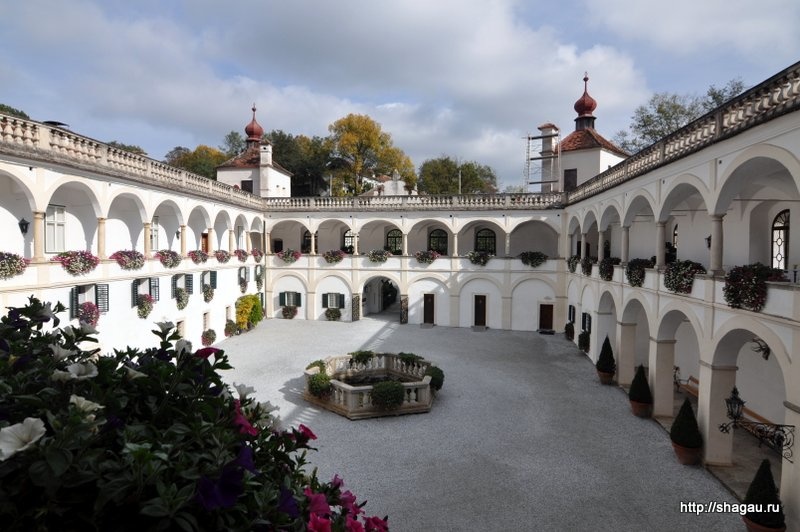 The magnificent courtyard of Herberstein Castle

The magnificent courtyard of Herberstein Castle

Read about the most interesting part – the interiors of the castle in the next post.