History, researchers’ assumptions and photos of the Mountain of Crosses in Lithuania. How to get there?

Not far from the city of Siauliai (Lithuania) is located an unusual hill, attracting the attention of tourists. It was named the Holy Mountain of Crosses, as trite as it may sound, because of the many crucifixes located on it. Their total number exceeds 50 thousand. Today this place has become a kind of shrine and the main attraction of Lithuania, attracting pilgrims from all over the world.

How to get there from the city of Siauliai?

The Hill of Crosses is an archaeological monument of Kaunas province. It is located 12 kilometers from the city of Siauliai on the road Riga-Kaliningrad. The exact address of the hill is: Jurgaiciu, Meskuiciu Siauliai 81439.

If you decide to go to the Hill of Crosses by car, you need to turn right behind the village of Domantai. The signs along the road will help you find your way.

You can also take public transportation to the hill. From the bus station of Siauliai runs a regular bus. Get off at the third stop, Domantai. From there you can walk (about 3 km), but bus does not go to the sight.

At first glance, it may seem that the Mountain of Crosses is just a very old cemetery full of graves. However, it is not. There used to be an ancient settlement, but now there is no trace of it left. Belief has it that if you leave your cross here, a traveler can get unprecedented good luck. 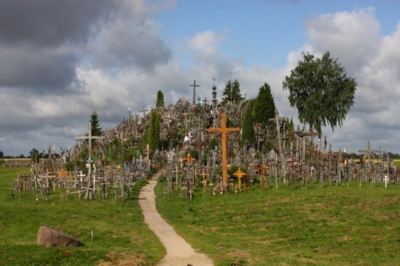 No one fully knows when exactly this place was formed and how long ago the tradition to ask Fortune’s favor here appeared. Today, there is only a legend that tells of the origin of the custom.

The legend says that previously there was a monastery here. Over time, for unknown reasons, it fell into the ground, but people have not forgotten about its existence. Soon one of the local residents had a seriously ill daughter, and none of the local healers could help him. The man, in despair, put a cross on the site of the monastery in the hope that the reclaimed place would give a magical healing. It worked, and in a few days his child made a full recovery.

This case became the impetus for the appearance of the custom of putting up crosses. There were rumors among the people that this place had magical powers. Gradually, new crucifixes began to appear on the hill and pretty soon it was filled with them completely. Only small paths were left to walk through the hill. But this did not stop people, and they continued to call their luck, digging new crosses between the old and leaning small to larger.

Already by the XIV century a full-fledged settlement was formed here, but soon enough it was destroyed by the Knights of the Livonian Order.

A significant increase in the number of crosses was noted in the 30s of the nineteenth century. At that time people began to place them in masses in memory of rebels who had fallen at the hands of the Russian Empire.

But new crucifixes did not appear only in memory of the dead. Many people continued to follow the custom and put up crosses asking for help and support from God.

The photo below shows what this archaeological monument looks like: 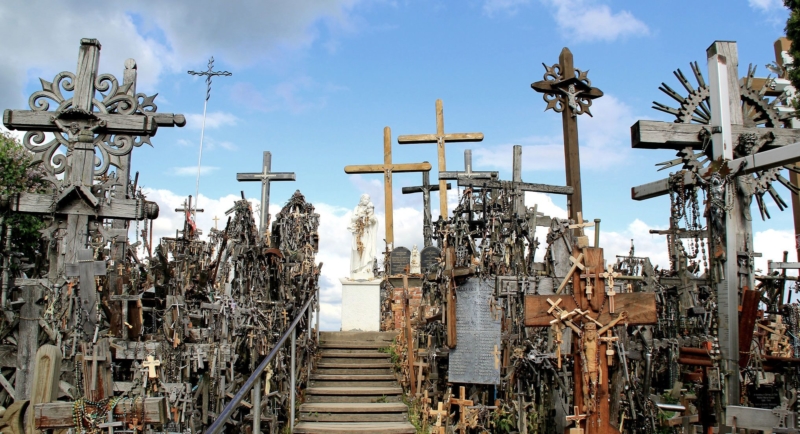 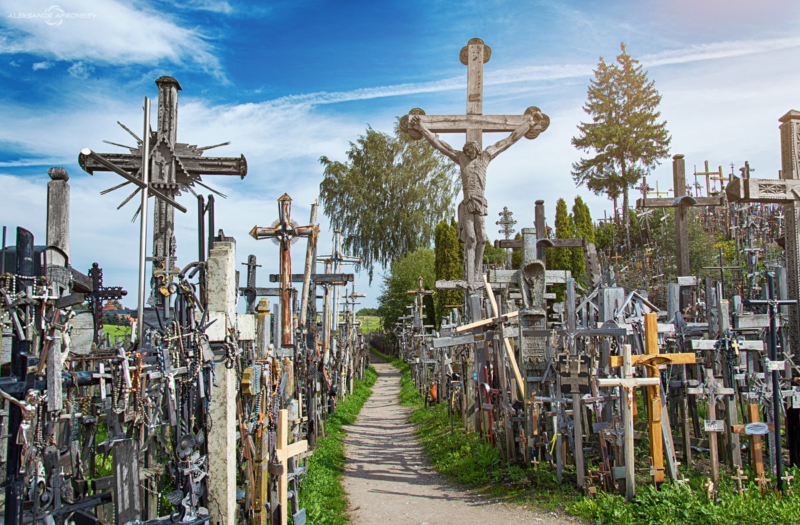 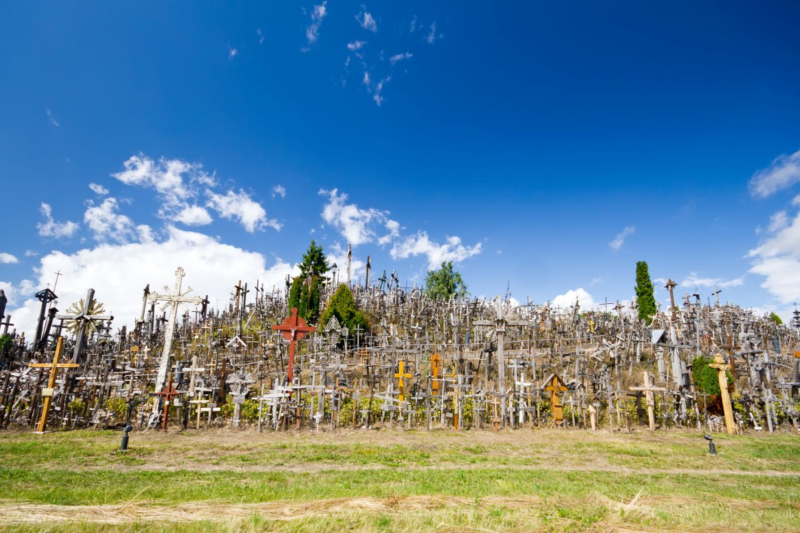 The assumptions of researchers

A legend is a legend that is not a true historical fact. Therefore, various historians have put forward their own theories of the appearance of the Mountain of Crosses. Some suggest that before Lithuania was baptized there was a pagan temple. They believe that pagan traditions were passed down from generation to generation and transformed and resulted in numerous Catholic crosses being erected on the site.

In support of this theory historians pay attention to the appearance of the crucifixes. The ornaments carved on them bear little resemblance to Christian symbolism, but have much in common with pagan signs.

By the way, there was even a struggle with this place in the twentieth century. For twenty years (from 1964 to 1984) they tried to destroy it by dismantling and removing the accumulated crosses.

However, this did not help. People kept putting up new crucifixes, taking up the vacated spaces. Soon the fight was stopped because it was pointless. 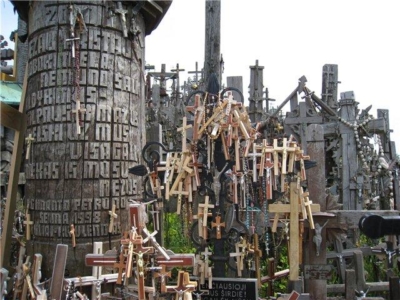 Now you can find not only old crucifixes on the hill, but also many new ones. Not only huge wooden signs, reaching several meters in height, stand here. There are also a number of small body crosses hung on the old ones.

Wandering along the paths of the hill, you can find very interesting handicrafts, decorated with unique and unusual ornaments. Some of them are decorated with metal. And there are very simple self-made crosses made from improvised materials.

People are drawn to this place regardless of their religion. They are attracted by the energy and attractive legend. Exploring the surroundings you can notice the Islamic crescent and even the six-pointed star of David.

An important event for this place was the visit of Pope John Paul II. On September 7, 1993, he visited the site and set up his crucifix. After such attention to the mountain, it has become popular with Catholics around the world and the number of visitors to the place has multiplied.

Undoubtedly, the Mountain of Crosses is worth a visit. The proof of this is a lot of positive feedback from tourists who have visited the place. Someone goes to the hill in the hope of the fulfillment of desires, and someone just wants to see with his own eyes an unusual pile of crucifixes. Many of the crosses strike the mind with their size and craftsmanship. People who have visited this place note the special energy and amazing atmosphere.

The Mountain of Crosses in Lithuania

READ
Do I need a visa to Croatia for Russians in 2017, price

Locals call it the Mountain of Prayer. In the past, it was called Yurgaichai or Domantai Mound. It was first mentioned as an archeological site in the Register of Lithuanian Cultural Heritage at the end of the XIX century. It is believed that people settled on this mountain in the first millennium AD. From the 11th to the 14th century there was a wooden castle. The castle did not resist under the onslaught of the Livonian Order. In 1348 it burned and was never rebuilt.

Whatever the source of all these legends, but the first written mention of the Mountain of Crosses dates back to 1850, that is, soon after the uprising of 1831, when many Lithuanians died. Their burial places were unknown. The inconsolable relatives could place crosses in their memory on this mountain. After the uprising of 1863, the number of crosses increased even more.

READ
How much money to take in Goa for 10 days

The Hill of Crosses acquired special significance during the Soviet rule. It became a symbol of resistance to the regime. After Stalin’s death, in the mid-50s the deportees began to return to the country. And then new crosses with inscriptions appeared on the mountain, telling of the great suffering and losses.

The crosses are an integral part of Lithuanian history. By 1961, there were more than five thousand crosses on the mountain. The Soviet government decided that the matter had gone too far. In an attempt to make people forget about the Mountain of Crosses forever, they burned the wooden crosses, destroyed the iron ones, smashed the ones made of stone and dumped everything into the river. After that, the hill was leveled with bulldozers. They spread rumors about epidemic so that people would not come to the place. The former mountain was strictly guarded, but crosses continued to be brought here at night. This state of affairs continued for more than twenty years. Although the mountain no longer existed, believers continued to come to the site and even organized religious processions, despite the strict prohibition imposed by the authorities.

After the Lithuanian revival began in 1988, the future of the mountain was decided. The Mount of Crosses became a milestone in the Christian world. In September 1993, Pope John Paul II celebrated a solemn mass on the Mount of Crosses. The mountain’s fame was further enhanced when a magnificent crucifix, a gift from Pope John Paul II, was erected there. Church festivals began to be held on the mountain. Every year on the last weekend of July, the Holy Cross Church Festival is held here. In 2000, a Franciscan monastery appeared at the foot of the mountain.

Since Lithuania gained independence in 1991, the mountain has become a monument of national importance. It commemorates the suffering of the Lithuanian people during the occupation.

READ
What to buy in Cambodia, prices and ideas

A visit to the Mountain of Crosses will be an unforgettable experience of your life. It is a magical place, quite unusual and memorable. Do not think that you will see a huge mountain, dotted with crosses. The mountain is rather a small hill, not very high and certainly not huge. It is deeply touched by the density of crosses of all kinds of shapes and sizes that are brought here. Between the crosses there is a narrow path. You can go up by it to the top. There are a few single crosses, but mostly all the crosses are leaning against each other. You will see crosses of different shapes and sizes, made of different materials. Some of the crosses have small crosses on them. Somewhere you will see rosary beads, pictures, notes. The Mountain of Crosses makes a very touching impression. Near the climb to the first mountain is a wooden sculpture of Christ. It seems that he is about to collapse under the weight on his shoulders. Each cross has its own story – sometimes joyful, but most often sad.

If you come to the Mountain of Crosses on a sunny day, you will have one impression. If you come here on a cloudy, windy day, the impression is very different. All visitors can leave their crosses on the mountain and pray before moving on.

To get to the Hill of Crosses from Šiauliai, go north via Tilzes . After about 10 km near Jurgaiciai village turn right and follow the sign to Kryziu Kalnas (Holy Cross Mountain) – 2 km on the country road. Krestov Hill is on the right, it is impossible not to notice it. There are no direct buses to this place.