Hobbiton is a village in New Zealand, artificially created especially for the filming of The Lord of the Rings and The Hobbit trilogy based on J.R.R. Tolkien’s works of the same name. It is a small settlement – a place of habitation of the people invented by the writer. The setting includes hobbit dens, landscape elements and the Green Dragon inn. Unlike standard cinematic backdrops, which are usually created from cardboard and plywood, the village has been rebuilt for real.

Now it is a local landmark, visited every day by about 300 tourists who come to this region just for the sake of Hobbiton. Artfully crafted cottages, manicured gardens, and an abundance of scenic details allow the traveler to fully immerse themselves in the recognizable atmosphere of their favorite movies from the get-go.

How it all began.

New Zealand, particularly the North Island, is famous for its rich and unique nature: lush vegetation and pastoral landscapes virtually unspoiled by modern civilization. More than 15 years ago, the famous Hollywood director Peter Jackson was looking for a place to start shooting films based on the works of English writer J.R.R. Tolkien.

Flying in a helicopter over the island, he noticed a large sheep farm, spread out over a picturesque hilly area, so similar to the places described in the trilogy “The Lord of the Rings” and the book “The Hobbit. The owners were three brothers from the Alexander family, who willingly sold most of the local land to the film studio. As early as 1999, the construction of the Hobbiton’s film set began.

The director did not want to go the traditional route for Hollywood, which involved the installation of simple plywood and cardboard sets, followed by drawing with computer graphics. It was decided to begin the actual construction of the Hobbit settlement.

The New Zealand Army was actively involved in the Hobbiton project. The military designed and built a 1.5 kilometer road, a beautiful stone bridge, and used specialized excavation equipment to create blanks for round hobbit holes and make the landscape even more relief. In all, 37 huts-earthen huts were constructed, which were artistically decorated with elements of plastic and wood.

The surrounding territory was transformed by landscape designers: barberry hedges were planted, small vegetable gardens and gardens near the holes were arranged, miniature fences were installed. Lichen mass diluted in nutrient solution was used to artificially age wooden and stone details. It was applied to the necessary surfaces. The particular composition of the lichen, which required a very long period of time to develop, grew in a matter of months.

According to the original work, Bilbo Beggins’ burrow was under an old oak tree, but there was no large vegetation on the surrounding hills. To faithfully recreate the picture, a suitable tree was chosen from the nearby woods. Sawed into pieces, it was brought to Hobbiton, installed and assembled, and the foliage was replaced with artificial. But this decoration did not last long and was replaced by a synthetic fiber-optic tree, which adorns the site today. All in all, almost a year of hard work and a huge budget were spent to create this little village paradise.

Revival of the scenery

It is worth noting that after the filming of The Lord of the Rings trilogy, the village scenery was abandoned, gradually the dens began to crumble, the carefully nurtured vegetation disappeared and the sheep grazed everywhere, just like before. These places have been revived only in 2012, when it was decided to shoot the beginning of the story of the Ring of Power by “The Hobbit or There and Back Again. To do this, capital work resumed in the valley – the remaining dens were arranged, new ones were created, all the cultural vegetation was replanted, and the Green Dragon pub was rebuilt.

The Hobbits have stocked Hobbiton Lanterns.

Everything looks almost as colorful and fantastical as it did in the movie: colorful flowers, lots of butterflies, lush green slopes, beautiful doors and windows of dens. Most importantly, there is stunning realism and detail: mailboxes, wicker baskets, lanterns, pretty jars, curtains in the windows, laundry drying on ropes. It really seems to be the home of good-natured, thrifty hobbits, who aren’t seen on the streets just because it’s second breakfast or third dinner time.

You can visit the Green Dragon Inn, which is decorated accordingly inside and out. Those who wish can feed the local sheep or lambs. Interestingly, in the UK recently opened a twin village of Hobbiton.

Already after the release of the first films with footage shot here, a pilgrimage of Tolkien fans to Hobbiton began. But the area was virtually abandoned, and the farmers were unhappy with the crowds of gawkers. After the village was last rebuilt, a full-fledged hiking trail was created and is available for all to visit.

Order and hours of visitation

The Hobbiton can be visited from 9 a.m. to 5 p.m. and only as part of an organized individual or group tour from the nearby town of Matamata or Auckland. 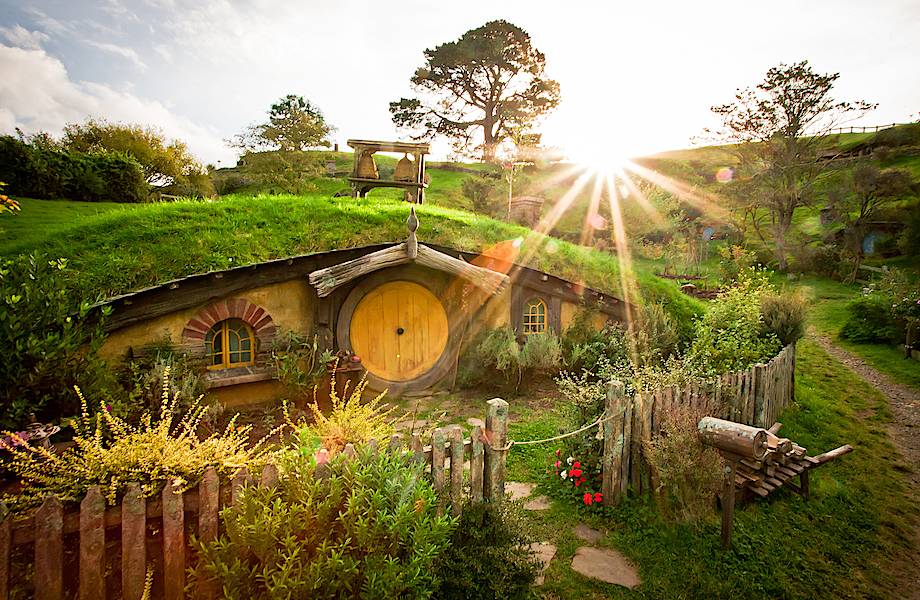 The phenomenon of “Lord of the Rings” fans traveling to places associated in one way or another with their favorite work has managed to get a special name – “Tolkien tourism. The former film set of the famous films about Middle-earth is visited not only by fans of fantasy. The hobbit village ranks third among the most popular tourist attractions in New Zealand and brings the treasury area of Matamata $ 78 million annually. So what’s so amazing about this former movie setting?

The story of Hobbiton: what is a hobbit village in New Zealand

“Once upon a time there lived a hobbit in a hole underground. Not in some filthy damp hole with worm tails and smelly musty smell, but not in a dry sandy hole with nothing to sit down on and nothing to eat. No, it was a hobbit hole, which means it was livable. 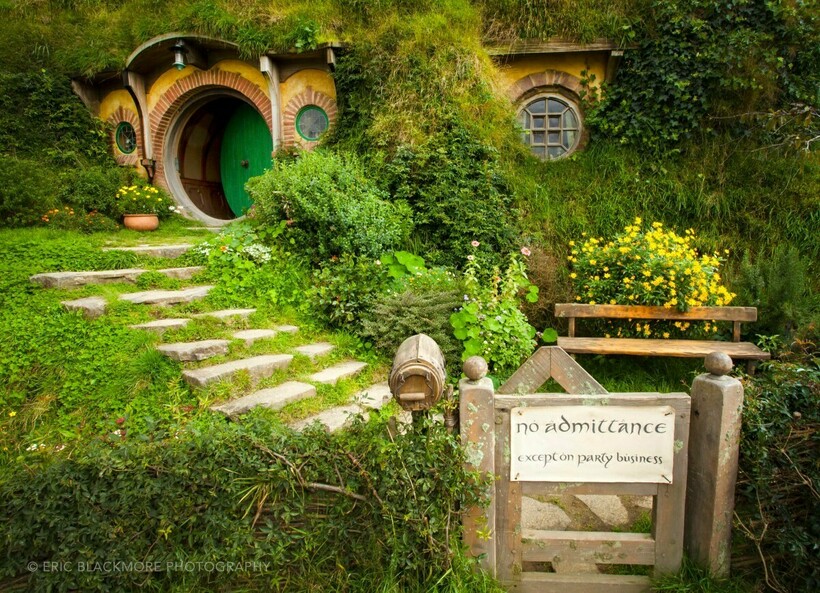 The first lines of The Hobbit. The first lines from J.R.R. Tolkien’s The Hobbit is a fitting motto for a hobbit village in New Zealand. The 4.8 hectares of land are beautifully manicured and homely. That’s exactly the ‘old English’ atmosphere that Lord of the Rings director Peter Jackson wanted – and it’s all the more surprising that he was able to find it in his native New Zealand, on the other side of the world from Old England.

In 1998, the “Lord of the Rings” crew went on a helicopter trip over New Zealand. Their main goal was to find a tall tree near a body of water that would fit the description of the Celebration Tree from the book. The perfect spot was found in the Matamata area, on the farmland of a family named Alexander. None of the farmers had heard of director Sir Peter Jackson before and had no idea about Tolkien’s book, but, rather surprised, they agreed to provide a piece of land to build the set. 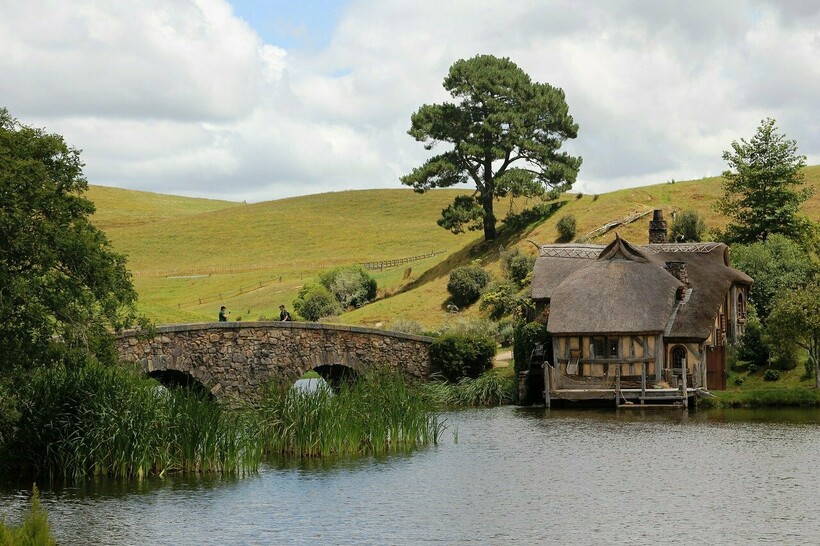 The architecture of Hobbiton: what a hobbit village in New Zealand is made of and how it was built

The first Hobbiton, which was the location of the filming of The Lord of the Rings, did not survive. It was just a disposable set of Styrofoam and plywood, which looked good only on the screen. But when in 2010 they began renovating the small town for the filming of “The Hobbit,” they decided to make it more thorough – the current Hobbiton was built by 70 people from “real” construction materials – concrete, brick and wood.

The construction of Hobbiton was led by the New Zealand army: with the help of heavy equipment soldiers built a road to the place of filming and formed the necessary relief. Work began a year before filming so that the gardens and grass had time to grow by the time the actors arrived. 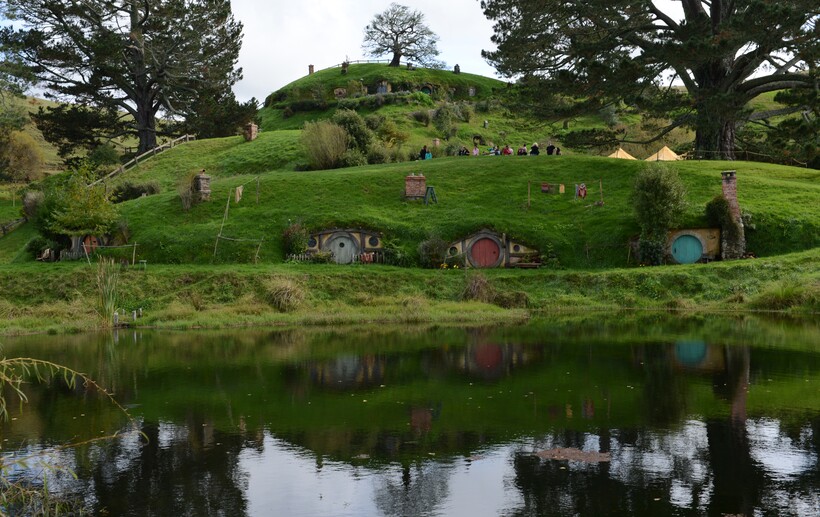 There are 44 hobbit minks in Hobbiton. Photo: elevation.maplogs.com

There are a total of 44 hobbit minks in The Hobbiton today. Almost all of the doors are props, but even where you can go in, there’s nothing interesting except the earth walls-the interiors of the hobbit houses were filmed in the studio.

But the doors of the houses are still noteworthy – they vary in size and color:

Distinguishing between reality and scenery in Hobbiton is not easy. Next to the real vegetable garden laid out models of pumpkins, and the real pine by the pond rustles with branches as well as a 26-ton artificial tree at the top of the hill. Everything has been thought out in detail, even the objects next to the holes tell about the habits and activities of their “owners” (chessboard, bags of grain, circles of cheese). 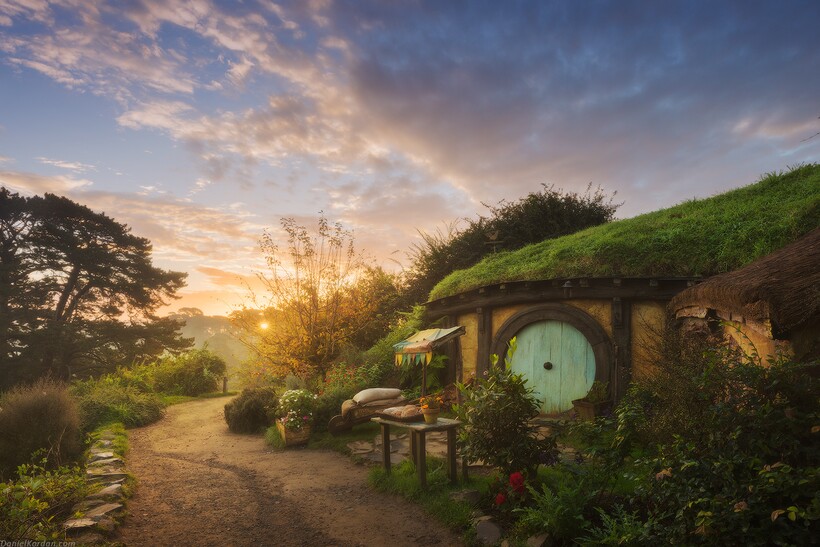 Distinguishing between reality and scenery in The Hobbiton is not easy. Photo: theuniq.net. Author: DANiil_KORZHONOV

In addition to the hobbit houses and dens, there are several other picturesque objects in Hobbiton village that bring pictures to life:

Hobbiton is actively developing, attracting more and more tourists. Whereas in 2012 only 17 people worked here and 25,000 people visited the hobbit village in a year, today there are more than 300 employees and the number of annual visitors exceeds 600,000. 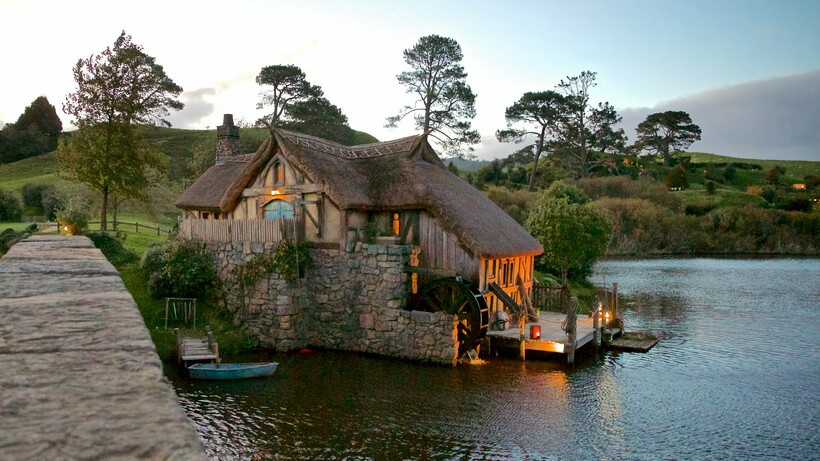 In addition to the hobbit houses, a watermill and bridge have been built in Hobbiton. Photo: vrbo.com

Hobbiton on a map of New Zealand: where the hobbit village is and how to get there

The hobbit village is about 15 minutes from the small town of Matamata. The distance from New Zealand’s largest city, Auckland, is 170 km, so it takes at least two hours to drive (remember, New Zealand has left-hand traffic). It is also possible to get to Hobbiton by public transport: there are intercity buses from Auckland to Matamata (travel time 3-3.5 hours), and local buses from Matamata to Hobbiton. 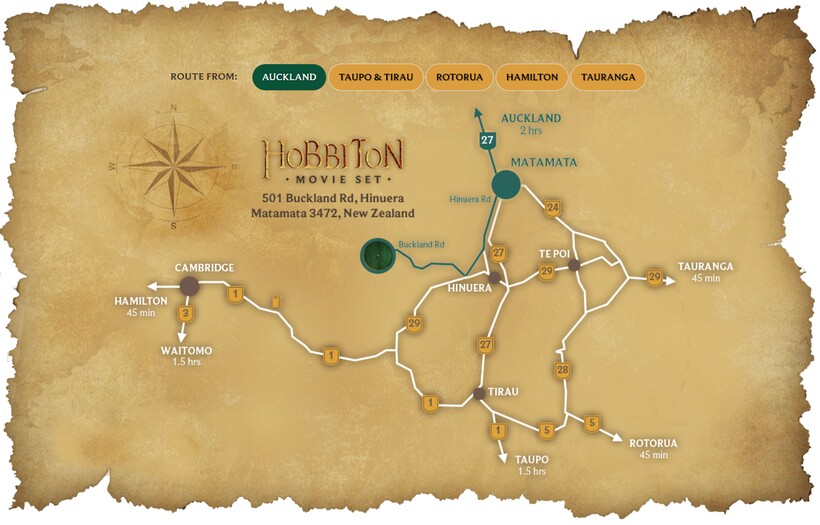 How to get to Hobbiton – official map. Photo: hobbitontours.com

It is not possible to walk around Hobbiton on your own – visits are only in organized groups that are formed before the entrance.

Large travel agencies offer organized tours. In addition to visiting Hobbiton itself, their program includes a tour of other nearby attractions:

Hobbiton attracts not only tourists but also athletes. Since April 2022, the hobbit village has hosted a Half-Marathon, where participants will embark on a scenic run along the Shire past hobbit dens and other landmarks. 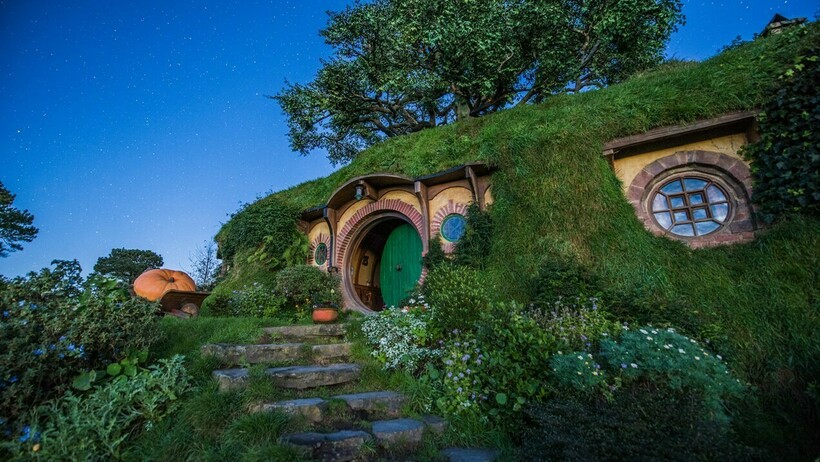 A day in Hobbiton is an adventure for the whole family. Photo: hobbitontours.com

Visiting Hobbiton Village in New Zealand is an interesting adventure for adults and children, “Lord of the Rings” fans and out-of-the-ordinary sightseers, movie buffs and sportsmen. See for yourself by walking through Hobbiton with this short video: