Pig Island in the Bahamas

The Bahamas are many tropical islands paradise in the western Atlantic Ocean. Most of them are overrun by tourists, but there is one particular island occupied by pigs. It is so called the Isle of Pigs.

Immediately mark an important detail. If you think that the Isle of Pigs is a place where you can see the clueless and ignorant tourists or dirty beaches, you are mistaken. The Isle of Pigs is the most ordinary paradise island, where the main population is … pigs. Yes, the usual domestic, but feral piglets live in this secluded place. 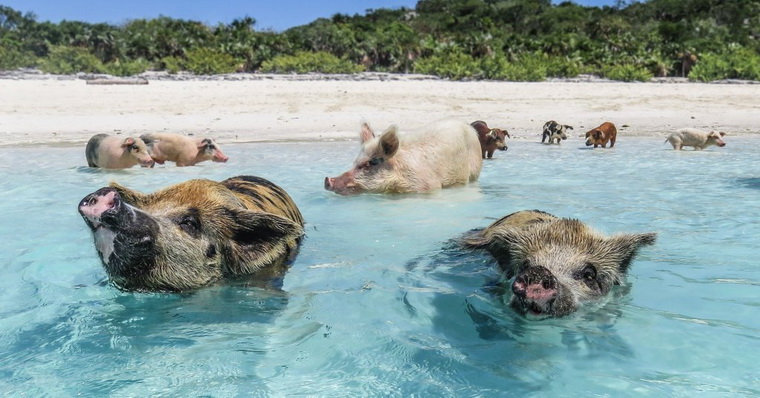 Isle of Pigs in the Bahamas.

That’s why the island is known around the world as Pig Island (in the original Pig Island), although it is officially called Big Major Cay.

Where is Pig Island 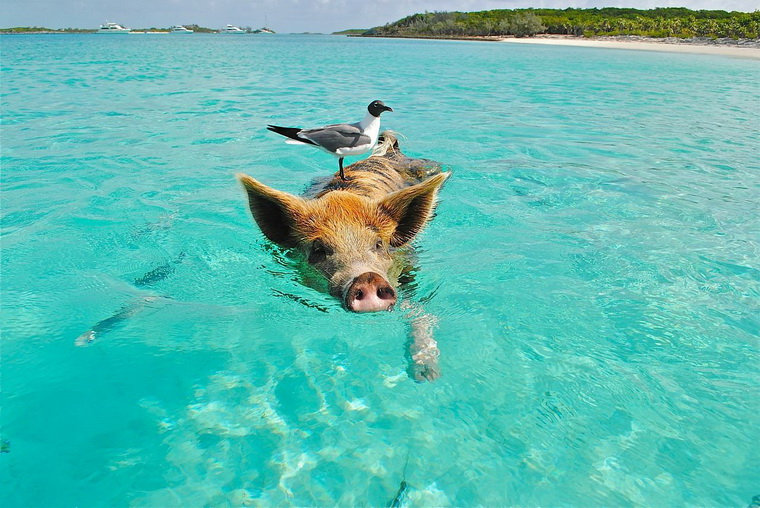 The pigs on the island are waterfowl

General information about the island of pigs

The island is about 1.9 km long and reaches 1.6 km wide. The surface area is just under 1 km 2 . The island is covered with tropical forests. Here you can find sources of fresh water and even 3 fairly large lakes. One of them (measuring approximately 210 by 130 meters) is located in the central part of the island and the other two lie nearby in the southern part. They are slightly smaller in size. There are beautiful sandy beaches on the coast of the island.

Despite the near-perfect conditions, there are no people or hotels on the island. It is practically an uninhabited corner of the planet (with the exception of the piglets, of course).

READ
Arizona Crater - the trail of an extraterrestrial visitor. USA 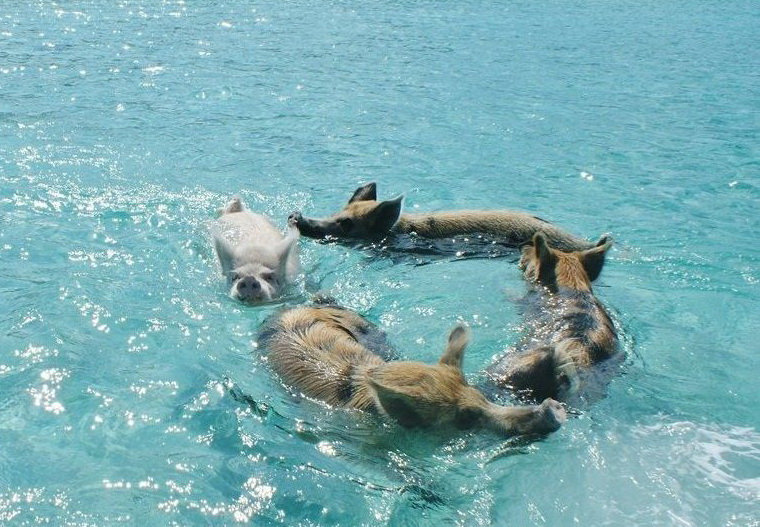 The Piggy Roundup in the Bahamas

Theories of piggy taking over the island

There is no reliable information about how pigs came to be in the Bahamas. But there are several speculations. 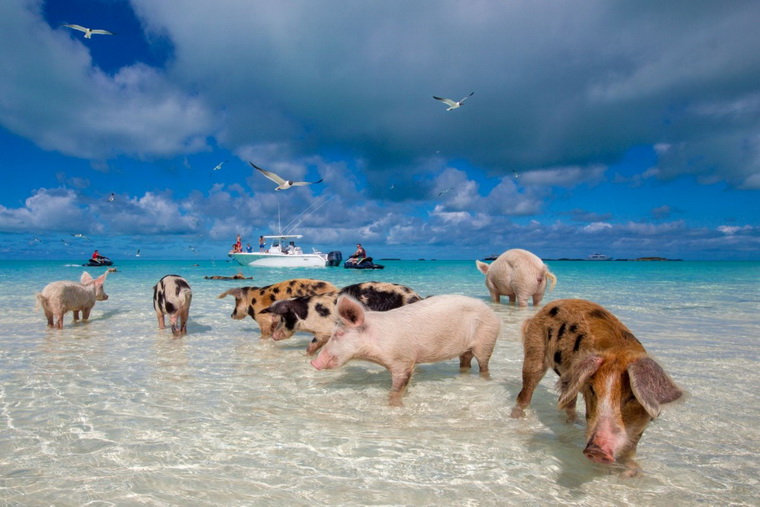 It must be said that the pigs on the island adapted quickly enough. There are now about 20 piglets who are absolutely not afraid of people or boats. Not only that, the pigs are so used to the constant attention of tourists that they literally attack tourist boats, knowing that people always bring something tasty with them.

Human-animal food interactions are quite common. For example, on Monkey Island in Hainan, macaques actively demand goodies from visitors, and for disobedience they can steal anything shiny from you, from necklaces to telephones.

Why Pigs in the Bahamas Learned to Swim

Actually, pigs are indifferent to swimming, but pig islanders are very fond of water procedures. This has developed in piglets over several generations. The pigs on the island began to realize that the sound of motorboats heralded the arrival of people, which meant they would bring various piggy goodies. Over time, the pigs, trying to bring the moment of eating the goodies closer, began to go deeper and deeper into the water, and so learned to swim. 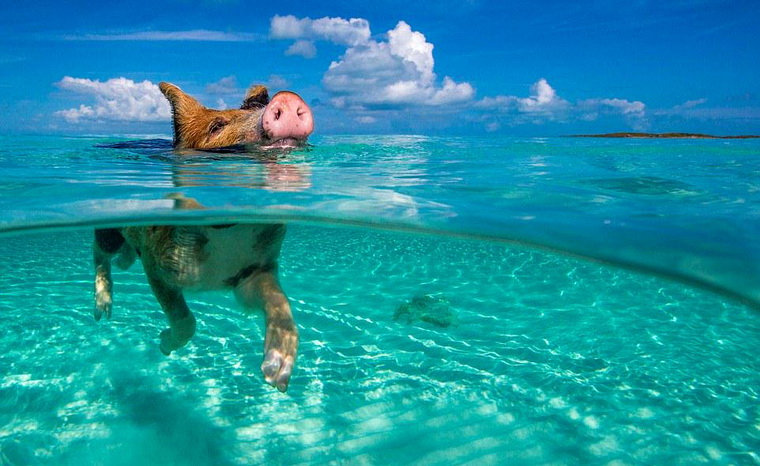 Swimming pigs in the Bahamas

Now even the little piglets on the island know how to swim. Hearing the sound of motors, the pigs set sail toward the tourists. Often enough, the piglets practically climb into the boats and beg for treats from people. 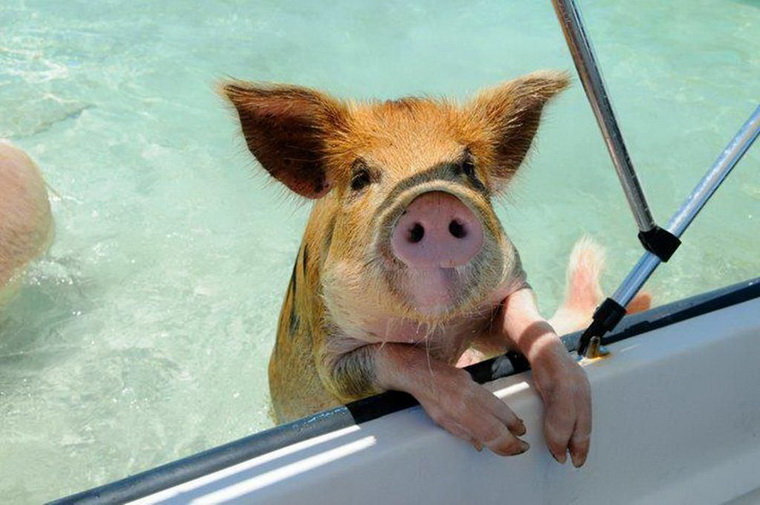 Hey, man, did you bring any goodies?

Do not think that only pigs are able to get used to humans and eat practically from their hands. About 750 kilometers southwest of Pig Island in the Cayman Islands area is the City of Scats. Here already graceful and deadly stingrays greet people and beg for treats in their own way.

The place where you can see the piggies is called Pig Beach (in the original Pig Beach). This small strip of sand, stretching about 200 meters, is located on the west coast of the island. 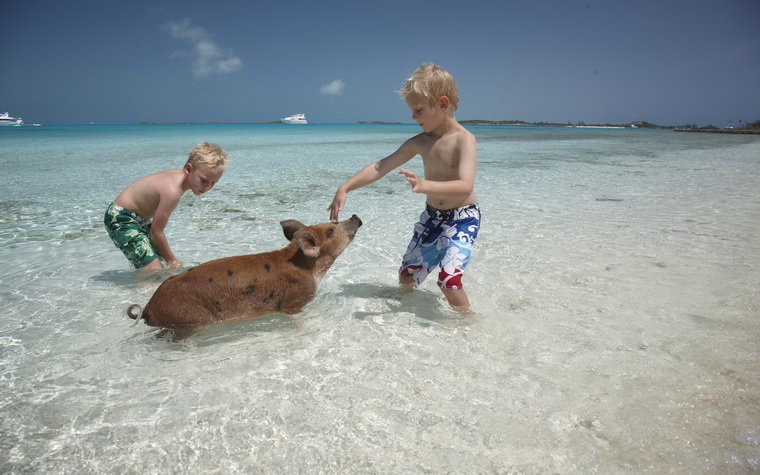 Hand pigs in the Bahamas.

Isle of Pigs in the Bahamas 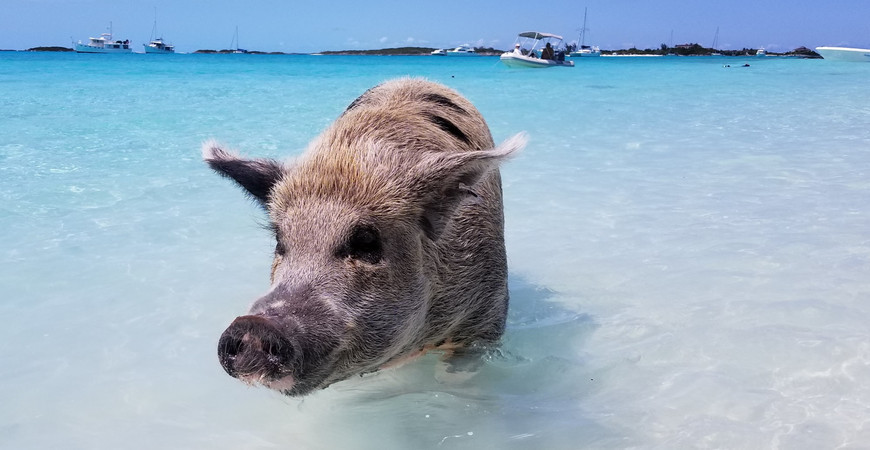 The name “Big Major Cay” will not tell many tourists anything. But as soon as you mention that it’s Pig Island, aka Pig Beach, many travelers immediately realize what they’re talking about.

So many names the island owes its unusual inhabitants – pigs. Stray animals just flooded the area. Their main occupation is swimming in the waters of the Caribbean Sea and sunbathing. Many readers would probably like to be in their place.

Except for the pigs, birds, lizards, a couple of cats and goats, the island is completely uninhabited. No humans have ever lived here. The island is characterized by its irregular boot-shaped shape and small size (from north to south its length is 1 kilometer 800 meters, its maximum width is 1 kilometer 600 meters and its area is less than a kilometer).

How did the animals end up on the Isle of Pigs

But back to our pigs. As you can imagine, they could not have appeared on the island from nowhere.

About the intention, of course, is unknown, but the place has really become a real attraction and has become a popular tourist destination: every day to the shores of the island throngs of tourists go. Tourists are attracted by the opportunity to feed these cute little animals, which only see the boat, swim to meet them, to stroke and coddle the little piglets, swim with them in the crystal-clear water and even take a joint photo.

By the way, it was the photo that started the worldwide fame of these Bahamian pigs. It was in 2009. Photographer Eric Cheng was on an expedition on his watercraft. Slightly deviating from his planned route, he decided to visit the South Bahamas to take pictures of the white shark, which is known to be found in those places. “Why not check out the island with the pigs as well,” thought Eric Chang. The idea was supported by the rest of the expedition. The photogenic animals appealed to the team so much that they organized a full-fledged photo shoot. Stunning pictures quickly spread around the World Wide Web and caused an unprecedented stir among users.

Another dose of fame for Bahamian animals provided and children’s writer Jennifer Nolan. In her book, The Mystery of Pig Island, she provides fictional and amusing stories from the lives of these cute animals. All of the stories have colorful illustrations. Paradise Island pigs have also been sung about by performer Sandra Boynton.

But such fame, as it turns out, has a downside. Not long ago, in March 2017, the media wrote about a mass poisoning of pigs on Big Major Cay Island. The reason for the sad incident was inhumane treatment – tourists gave the animals rum to drink, after which seven pigs died. Because of this, the Bahamas Society for the Protection of Animals is thinking of imposing a ban on the feeding of these unusual pigs.

How to get to Pig Island

Due to the fact that these cute animals are on the island, you can only get to them by water transport.

A very convenient option is to buy a tour to Pig Beach. Organized tours depart regularly from the capital of the Bahamas – the city of Nassau (a distance of 130 kilometers to Pig Island), the nearby islands of Exuma and Staniel Cay. As a rule, tours are not limited to visit only this attraction and include other places of interest.

If you intend to see only the inhabitants of Pig Island and want to save a lot of money, you can go to the nearest pier and there to find locals offering their services carriage .

Another option is to travel completely on your own (if you have the money to spare). In Nassau you rent a boat, a yacht or a boat (with or without a captain) and sail to the island.