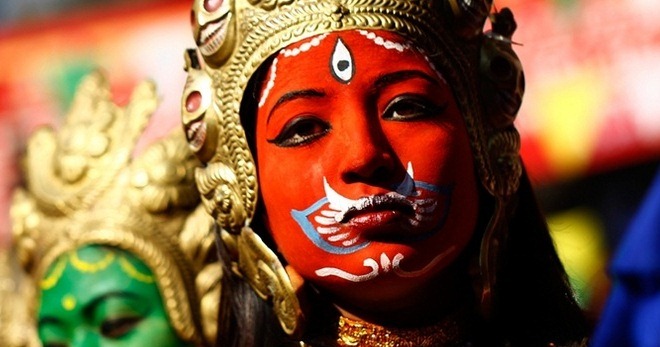 People of Nepal follow the local calendar – Bikram Sambat – which is more than 56 years ahead of our usual Gregorian calendar. The calendar months last from 28 to 32 days, because the holidays in Nepal do not have strict dates, and celebrate with the lunar cycles.

Almost all of Nepal’s holidays have religious overtones. The most significant are considered to be:

READ
Holidays in the UAE, dates and detailed descriptions

Because of the difficult terrain, it is not easy to get to Nepal. The most affordable way to do so is to fly to one of the local airports. A list of the largest of them is presented in this article, which will tell about their features and infrastructure.

The best way to explore a foreign country is on a guided tour. This applies to Nepal: its multifaceted nature, opportunities for outdoor activities, unique culture are very interesting. Going on a trip, plan a few excursions that will help you learn more about the country.

A vacation in Nepal is the dream of every traveler. They come here climbers, lovers of trekking, photo tourism, those who are looking for new experiences, want to learn spiritual practices, immerse themselves in the atmosphere of Buddhism. Nepal – the focus of exoticism, which will not leave you indifferent!

Trip to Nepal, no doubt, promises to be very exciting. Going on a long trip, take care of your accommodation in advance. In the major tourist cities of the country there is a different level of comfort and price range.

The holidays in Nepal are numerous, all of them are associated with beliefs. Moreover, the total number of celebrations does not surprise anyone. There are more gods than people in the country.

Nepalis do not observe the New Year by the Gregorian calendar or by the Eastern calendar, but by their own calendar, which begins in 57 BC and is considerably ahead of the Gregorian.

The New Year itself is not celebrated by all the inhabitants. Most of the celebrations take place in large cities, where images of the hypostases of the gods leave the temples and they begin to be carried through the streets in special palanquins.

The event lasts for about 9 days, during which the population makes sacrifices, prays to the gods and asks for a favorable next year, good luck and good fortune.

This is another holiday that belongs to the events associated with the change of seasons. It takes place most often in February, but the exact date depends on the lunar calendar. In fact, it is the New Year for Buddhists. It is celebrated by solemn services in temples, where they blow the horn, heralding the arrival of a new period, and sprinkle the crowds with tsampa for good luck.

The main festivities take place near the Boudnath temple complex in Kathmandu. Here, well-dressed lamas walk around the complex three times in a circle with a picture of the Dalai Lama, and then wash the statue of Buddha. All this is accompanied by chants.

The roofs of houses and temple buildings are renewed and decorated with flags. Particularly revered enlightened people at this time help do a lot of cleaning and prepare fuel. It is believed that the eve of this holiday provides many opportunities to purify one’s karma and earn a better life.

God Shiva has a special meaning for the people of Nepal. This holiday is celebrated in February, with the main events taking place at the main temple in Pashupatinath in Kathmandu. However, tourists will also find something to see in any other major cities near the large temples.

In the sacred texts for the Hindus, it’s written that any meditation on this night will be a hundred times stronger than usual, because the achievement of a special state contributes to the position of the Sun and the Moon.

In general, the holiday is celebrated several times a year. Believers read stories about Shiva and sing hymns in honor of this god. All in all, the action takes about a day, after which the festival begins on the banks of rivers and reservoirs.

The people of Nepal cannot say exactly what it is associated with. The most popular version is that the god Krishna defeated the demoness Holika, after which there was peace on earth, spring came and everything began to bloom. But there are other versions, in which Holika acts as a good savior of her own brother from an evil god.

On this day you can be poured over with water or sprinkled with colorful paint. Most diligently, of course, children do it, but adults often do not lag behind in this activity. Everyone is very happy, jumping and having fun.

Important point: the Holi festival can not survive your camera or a camera. That’s why many people wrap them in bags in many layers. Keep in mind that kids love pouring water on everyone right off the roofs! One more thing: some paints can be very absorbent to the skin, and then it will be hard to wash them off. Lubricate all exposed skin areas with a greasy cream first.

This holiday is associated with horses, which once came to the aid of people, according to one belief, and trampled an evil demon.

During the celebration, all the horses and ponies, are gathered on the parade ground and begin to race in front of the king and officials. Within 2 days of the beginning of the celebration, the ban on betting and gambling in general is lifted in the country!

There are horse races in Tundikhel. Riding and dressage competitions are held in the heart of Kathmandu.

The Year of Jatra coincides with another event, the Pasa Chare, a colorful procession. Its main purpose is to protect the inhabitants from the evil inhabitants of the underworld.

The festival is associated with the worship of snakes. They are responsible for the good state of the land, in addition, thanks to their benevolence it may rain on time and save the crops, and thus there will be no famine. Killing a snake is considered to be a great sin, so even defending oneself, one should use only passive ways to save oneself when faced with an angry snake.

The feast begins counting from the month of Shravan, it falls on the 5th day after the full moon, which occurs in that month. In order to attract the favorable attention of snakes and snake gods, as well as to scare bad luck, people decorate the entrance of their homes with images of these reptiles. And sometimes they look very menacing and grim, and sometimes – colorful and very cute.

A rather unusual holiday, during which you can see people running through the streets, dressed in costumes of cows. They can sing cheerful songs, goof around, and have fun.

It is not immediately clear that this holiday is meant to honor those who have died in the past year. According to local beliefs, the souls of the deceased will be accompanied by cows so that they don’t get lost in the afterlife. The fun and joy is intended to lift the spirits of those who have lost loved ones, to distract them from sad thoughts, and to show that life goes on.

Women’s Day, which lasts for three days. During this time, women are given gifts and put on their best clothes. Girls and women purify themselves during this time, fasting and praying for the health and well-being of their husbands.

According to local traditions – next to her husband, her life is considered inseparable from his, which is reflected in the nature of the prayers. Nevertheless, outwardly the holiday looks nice enough.

One of the main holidays in Nepal, which is associated with the god Indra, responsible for rain. If the deity is well pleased, he will send heavy rains. Otherwise, there will be drought and famine. Therefore, the locals try to propitiate Indra.

Celebrations are held all over the Kathmandu valley, people actively praying and decorating their homes with ribbons of Indri colors. On a huge chariot they carry his statue to show the god how beautiful the valley is, how good it is when everything around it blooms, grows and fragrances. Then Indra is persuaded not to let the sun burn everything. The chariot is followed by a festive procession. They praise Indra and sing solemn songs.

The tradition of celebration stretches back to the 10th century!

The worship of the god Indra is combined with the worship of Kumari, the living embodiment of the goddess, which at this time become girls under the age of 9 years. According to local beliefs they have a special energy, the same as the goddesses. The girls are ritually painted and carried in palanquins around Darbar Square near the Old Royal Palace.

The most important holiday of Nepal, which is dedicated to the goddess Durga. It takes place over a period of 10 days.

During this period, it’s undesirable to work a lot, as all attention should be paid to the deity, and not the daily chores.

The celebration is celebrated by flying brightly colored kites. There are also fireworks, as they are not as popular in Nepal as in other Asian countries.

In Nepal, the tradition of sacrificing goats and buffalo to the goddesses is still preserved, and the temple of Durga is opened only once a year for all people without exception.

The youngest go to the elders, and they bless them in words and deeds, putting a red dot on the forehead – tika. The absence of such a mark on the forehead, by the way, is considered quite a big disgrace, a sign that you have angered the head of the family. Therefore, Nepalis at this time try to make peace.