The Hong Kong-Zhuhai-Macao Bridge in China is the longest sea bridge in the world. This wonder of Chinese thought and technology stretches for 55 kilometers. The bridge has both the traditional construction with cable-stayed elements, and an underwater section.

Usually the bridge name is abbreviated to HZMB. This corresponds to the first letters in the original name of Hong Kong-Zhuhai-Macau Bridge.

The bridge is built on the waters of Lingdingang Bay at the mouth of the Zhujiang River (also called the Pearl River) in the southern part of China. 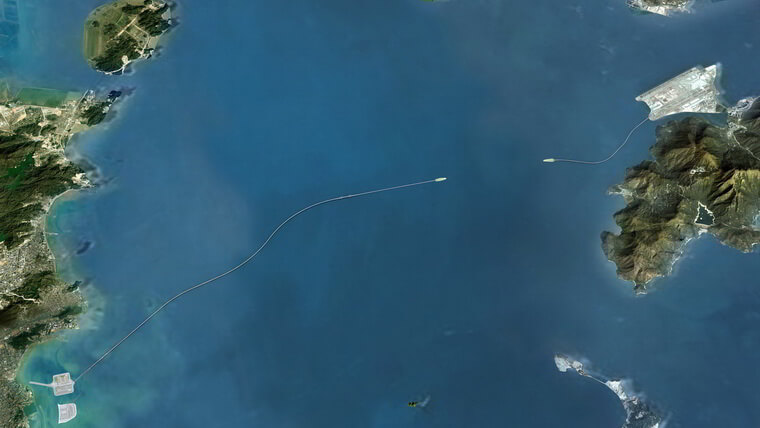 Which sections make up the longest sea bridge

The unusual design of the bridge-tunnel contains three normal bridges and one underwater tunnel. The bridge also includes four artificial islands. Two were built long before the bridge design. The other two, respectively, are already under construction. The total length of the bridge is 55 kilometers.

The first section is not very long. It begins in the area between Macau and Zhuhai. This way is an artificial dam with a length of about 1200 meters and a bridge about 800 meters. This section connects the Chinese mainland to the first artificial island.

From here begins the second and longest section of the bridge. Its length is 22.9 kilometers. There are three cable-stayed bridges of 280 to 460 meters in length. It allows for easy passage of ships under the bridge. 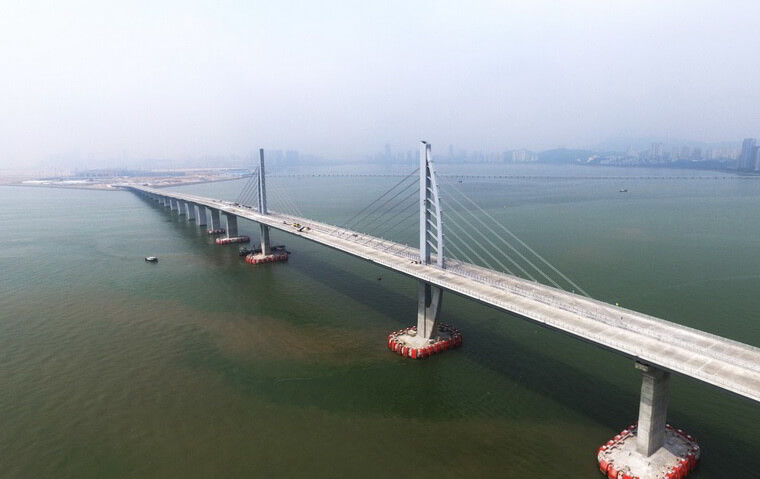 One of the cable-stayed bridges.

To gain a better understanding of the cable-stayed structure, we recommend reading about the Millau Viaduct – the highest bridge in the world. It has a classic cable-stayed design, and it is also incredibly tall.

The viaduct crosses the bay into which the Zhujiang River flows and ends with a second artificial island. It is the boundary between the above-water and underwater sections of the bridge on the west side. 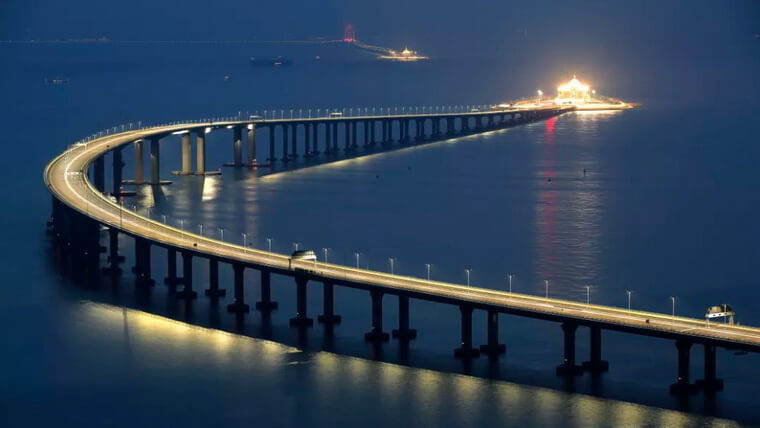 Above-water part of the bridge from the Macao side

Next is an underwater tunnel 6.7 kilometers long. It is laid under the bay and comes to the surface on the third artificial island just before the administrative border of Hong Kong. 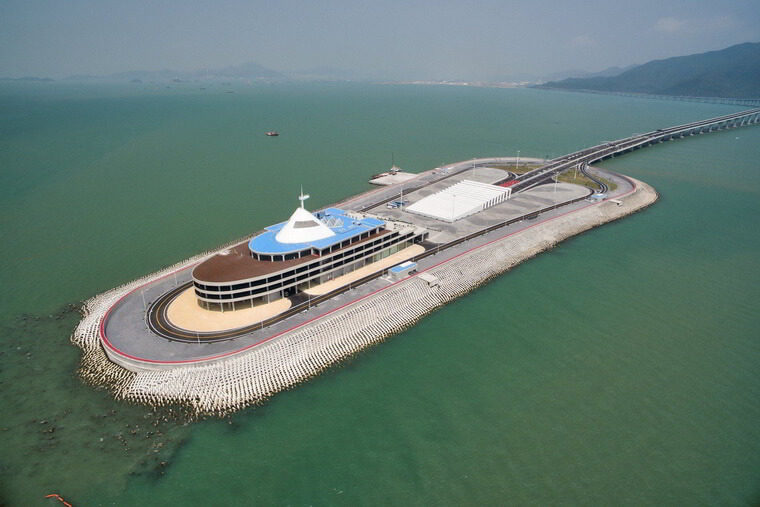 Artificial island from the Hong Kong side

The underwater tunnel was built so as not to interfere with the passage of ships in this area.

The final section of the track is a viaduct 9.4 kilometers long. Its final point is the island Chek-Lap Kok. Here is the international airport of Hong Kong. This is the fourth man-made island. It lies in the northern part of the island of Lantau. 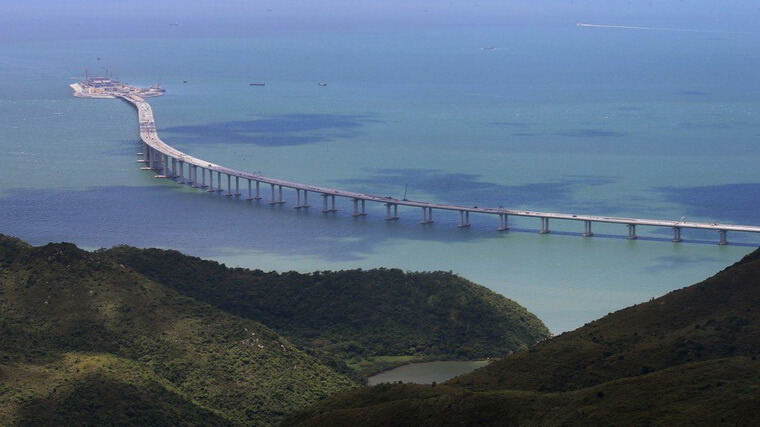 Part of the bridge from the Hong Kong side

Such a bridge design is not the only one in the world. The famous Øresund Bridge between Sweden and Denmark also has both above-water and underwater sections. It is considerably shorter than the Chinese one, though.

History of the Hong Kong-Zhuhai-Macau Bridge

Gordon Wu, founder of Hopewell Holdings, proposed the concept of a bridge-tunnel linking Hong Kong and Macau back in the 1980s. In 1988, Wu sent the idea to Guangdong and official institutions in Beijing. He planned to build a bridge north of the current one.

In mid-1989, protests erupted in Tiananmen Square and the bridge was forgotten.

The bridge route proposed by Gordon Wu was supported by the Zhuhai city government. In the mid-1990s, Zhuhai built a bridge between the mainland and Qiao Island. It was to be the first section of the route. The final layout of the bridge, though, was not approved by either the Chinese government or Hong Kong leaders.

The Chinese authorities supported the project only on December 30, 1997. The Hong Kong government was still hesitant and calculated the possible impact of the bridge on the environment.

On September 20, 2002, at the China-Hong Kong Conference on Coordination of Major Infrastructure Projects, they decided to conduct a joint feasibility study of the project.

In 2003, the parties still reached a compromise and decided to build a bridge that would connect Hong Kong with Macau and Zhuhai.

Interesting fact – The bridge is, of course, an important infrastructure project. But there is an opinion that it is an attempt by the Chinese authorities to integrate Hong Kong into China. The fact is that both Hong Kong and Macao are formally an integral part of China, but in fact they are separate administrative regions. They have their own governments, their own policies and their own legal systems. 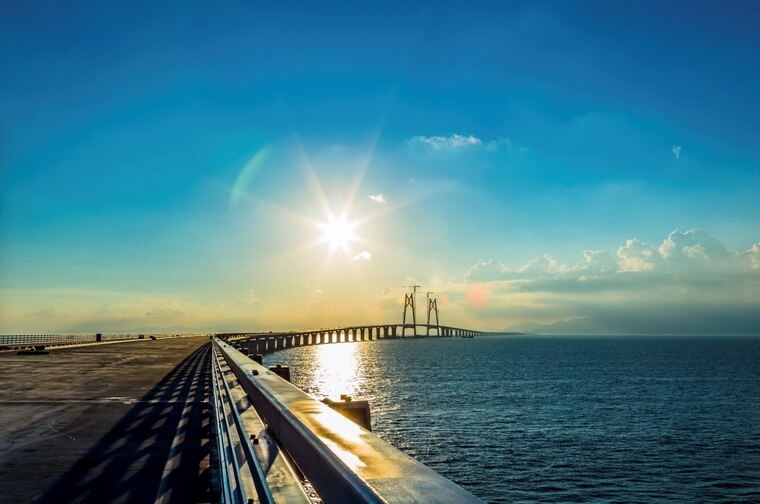 After long financial negotiations it was decided that 22% of the cost will be covered by the authorities of China, Hong Kong and Macao. The rest 78% will be a loan from the Bank of China. The full cost of the project is estimated at $19 billion.

Tragic fact – Nineteen people died during the construction of the bridge. Of those, 9 from the Chinese side and 10 from the Hong Kong side. The number of victims, according to various sources, ranges from 234 to 600 people. But on the other hand, it is negligible compared to the number of dead and injured during the construction of the Panama Canal. About 22,000 people died there.

The Chinese break records again: the Celestial Empire has opened the longest sea bridge in the world.

Receive in the mail once a day one of the most read article. Join us on Facebook and VKontakte. 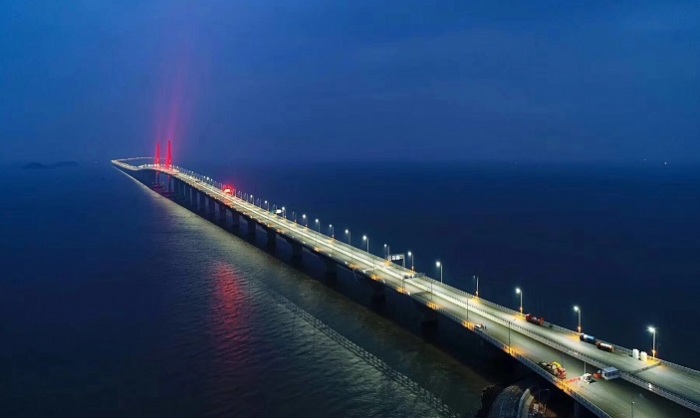 Finally we’ve waited, China is frozen in anticipation of the official opening of the world’s longest sea bridge. This truly gigantic construction, 55 kilometers long, has connected three of the country’s most important cities – Hong Kong, Zhuhai and Macau. Head of State Xi Jinping, who initiated the creation of this grand and significant transport artery, is also expected to attend the opening ceremony of such a large-scale project. But this is not the first such ambitious creation of the great country, which has shocked and delighted the whole world at the same time. 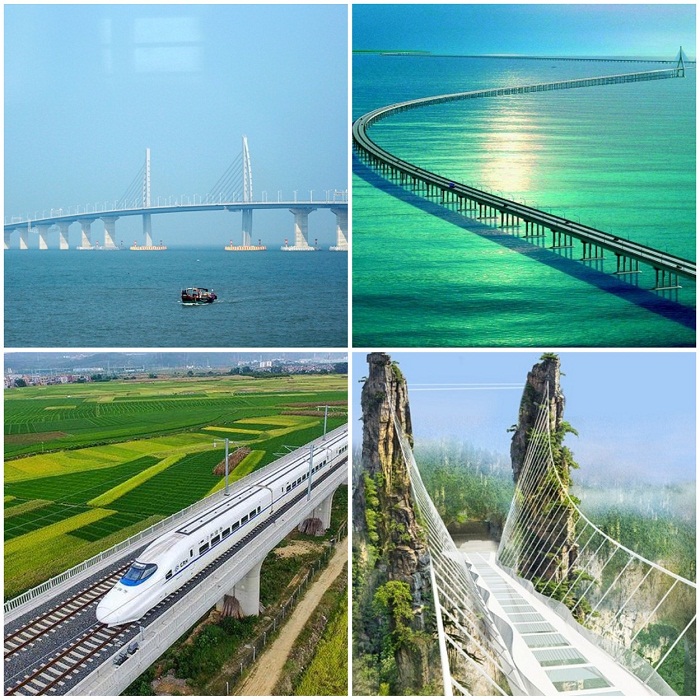 It is a well-known fact that when it comes to the most ambitious and striking super-achievements in any field, be it science, technology, art or high technology, the Celestial Empire always strives to take its honorable first place. Bridge construction is no exception. After all, all the longest, tallest, most … have created Chinese engineers and builders, not only to make life easier, but also to amaze the whole world with records. 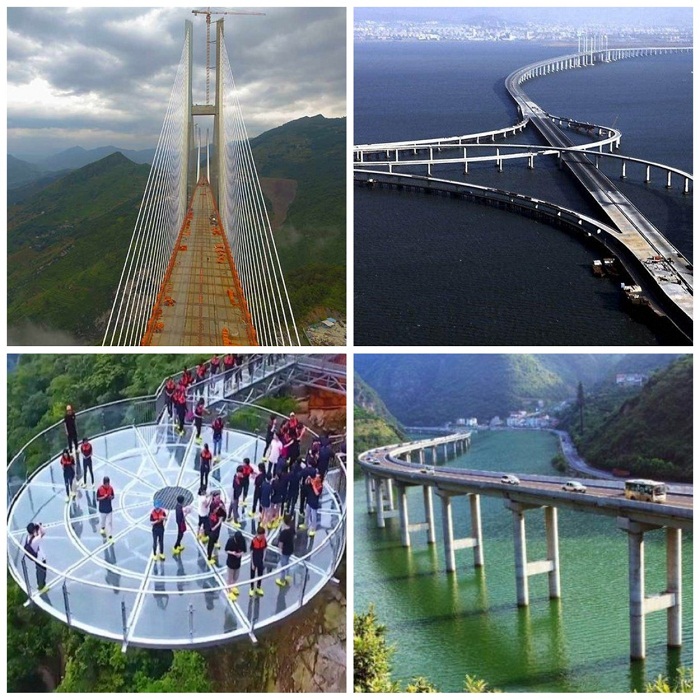 In this review, we have collected the most famous of their creations, which surprise with their grandeur and originality.

1. The longest sea bridge in the world connects Hong Kong, Zhuhai and Macau 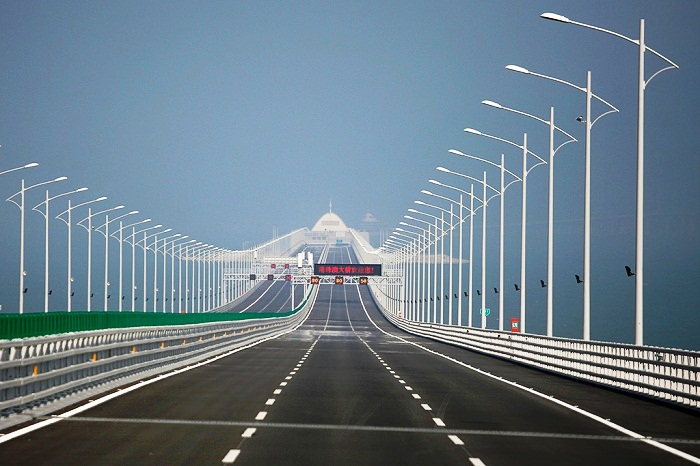 It’s happening! The official opening ceremony of the most incredible marine engineering structure to date, which connects three megacities on the shores of the South China Sea, will finally take place. 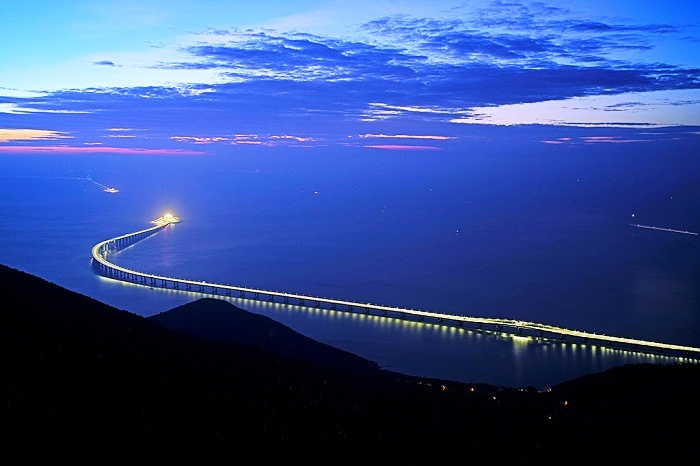 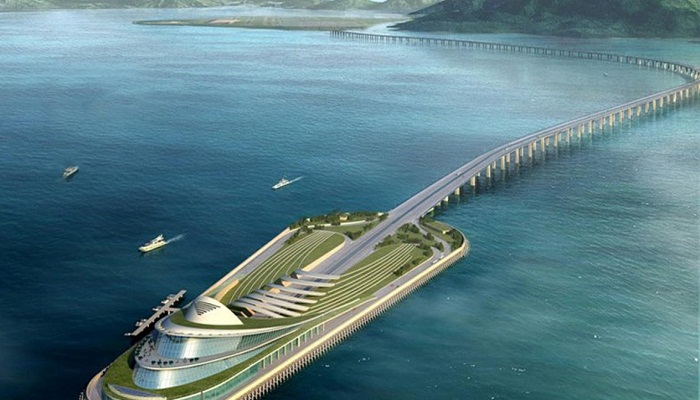 This grandiose project includes the world’s longest underwater tunnel, three artificial islands and the bridge itself, stretching over the sea. The total length of the structure is 55 km!

According to the constructors themselves, such a massive structure can withstand even a powerful earthquake with a magnitude of 8, and its lifetime can be 120 years. Well, of course, it will fulfill its main purpose – to significantly reduce the travel time between Hong Kong and Zhuhai from three hours to 30 minutes. 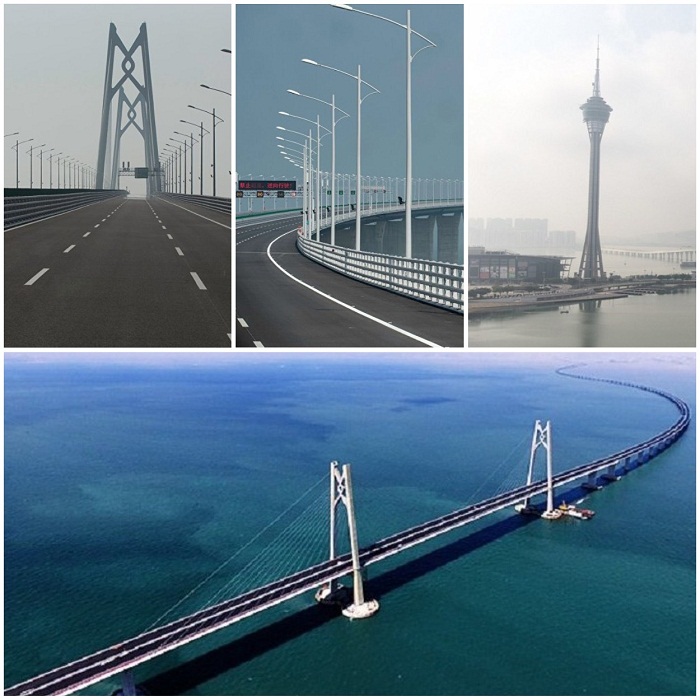 2. Danyang Kunshan Viaduct – the longest railway bridge in the world 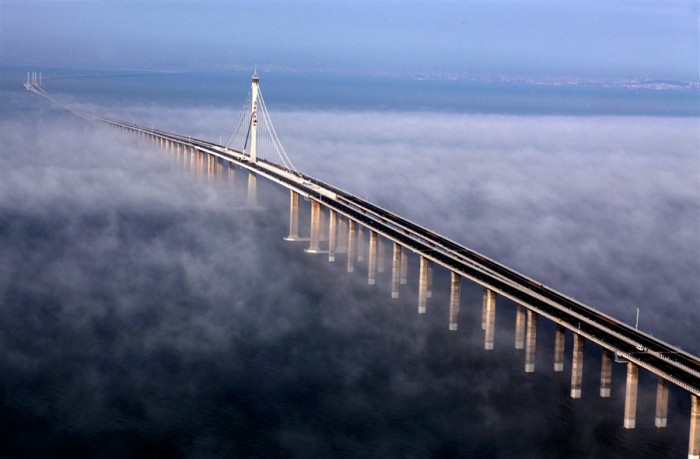 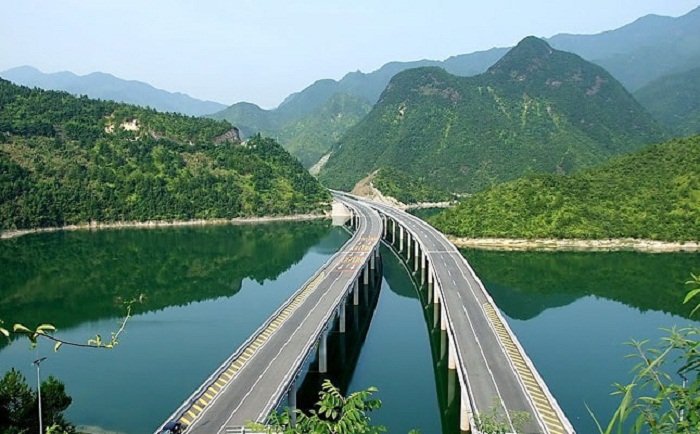 The Danyang Kunshan viaduct (a bridge structure that passes over a depression or large gorge) is located in East China between the cities of Nanjing and Shanghai and is part of the high-speed Beijing-Shanghai Railway. 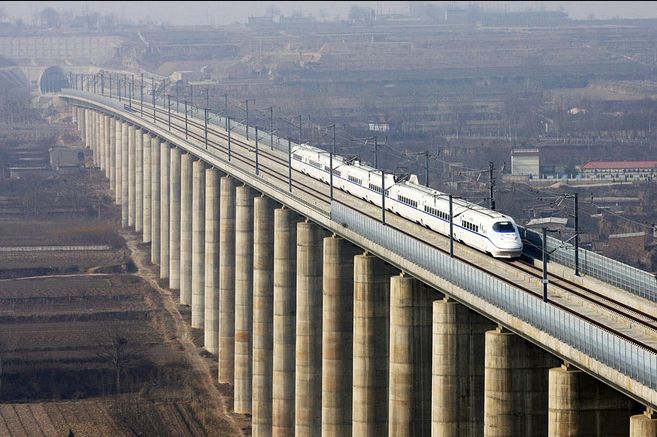 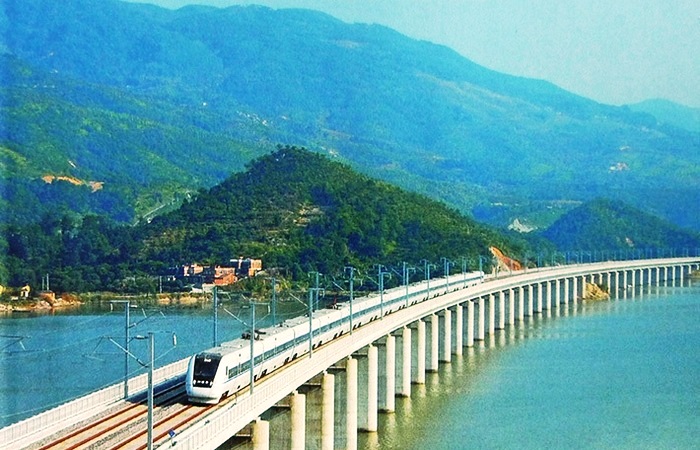 It’s a massive structure that enters the Guinness Book of World Records for its record length of 164.8 kilometers. The builders did a colossal job creating the bridge both on land, overcoming all kinds of difficult terrain, and over water, towering over canals, rivers and lakes. 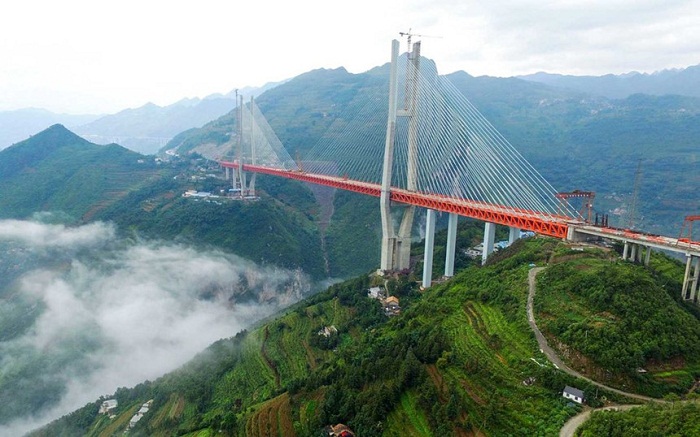 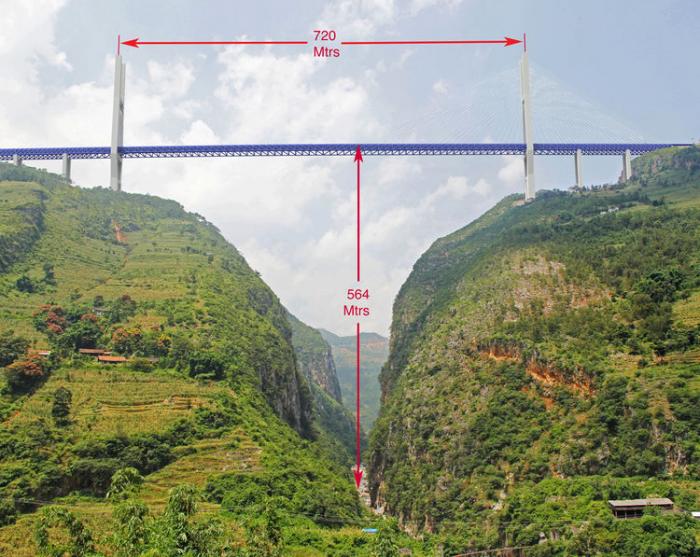 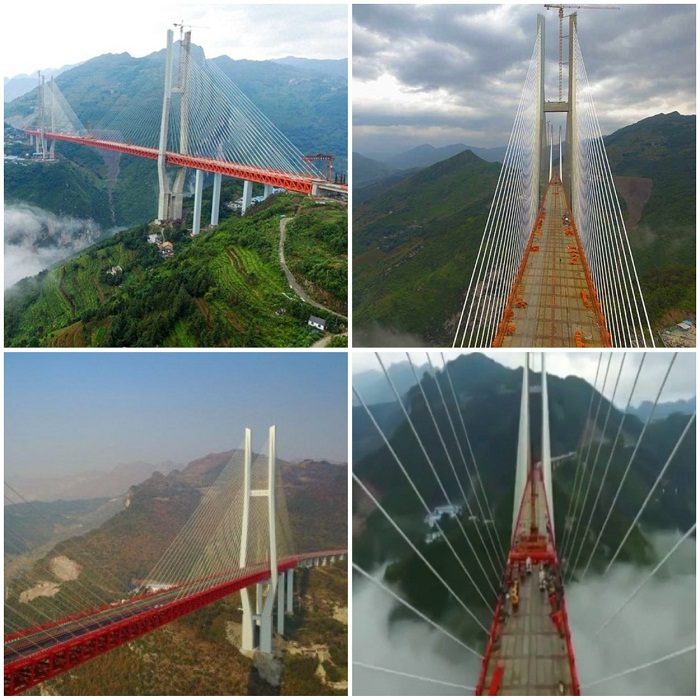 In order to connect the provinces of Yunnan and Guizhou, one of the most incredible bridges in the world was created. Because of the difficult terrain, the bridge builders had to raise the bridge to a height of 570 meters and its length is 1,341 meters.

4. Over-Water Highway – the world’s first bridge to be built over a river bed 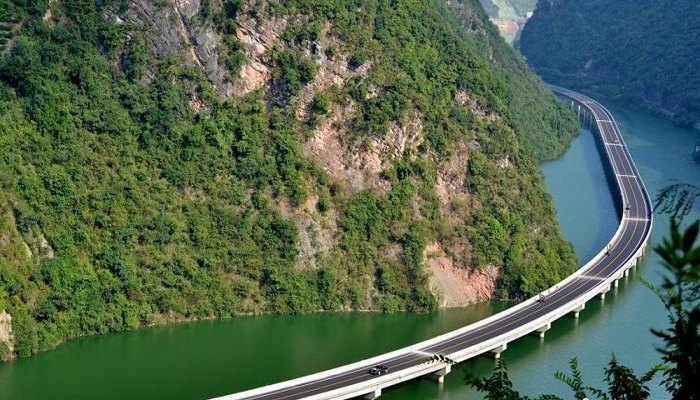 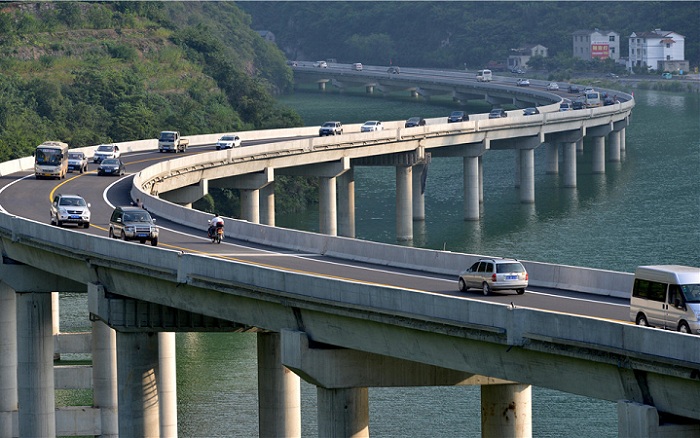 In the Chinese province Hubei a very unusual highway was put into operation. The main feature of the highway is its non-standard location – the highway was built directly on the river bed. The reason for such an extraordinary decision is banal – the local residents and environmental organizations were against the construction of the highway and the disturbance of the local landscape (a part of the mountain had to be demolished and a tunnel built into it). So a compromise was found. 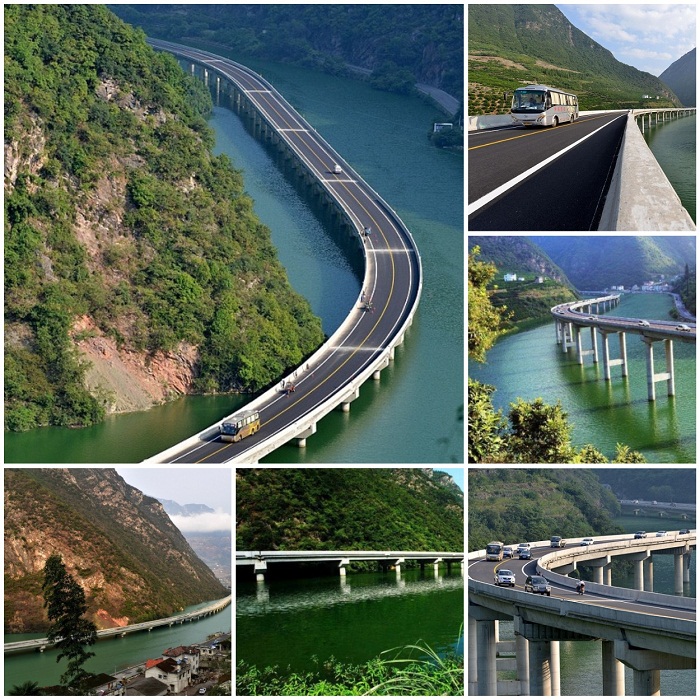 Chinese engineers designed the original 4-kilometer viaduct, which greatly facilitated the life of motorists. Now the place has become a tourist attraction for the entire province.

5. Zhangjiajie – the longest and highest glass bridge in the world 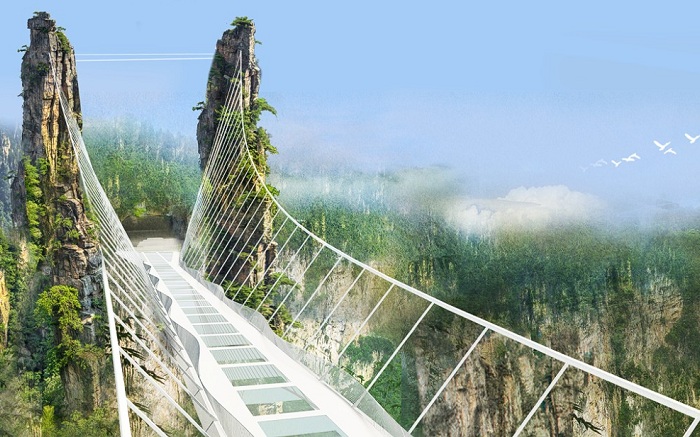 In the south of China they have created the longest glass bridge in the world called “Walk in the sky”, which is the most fantastic creation of human genius. 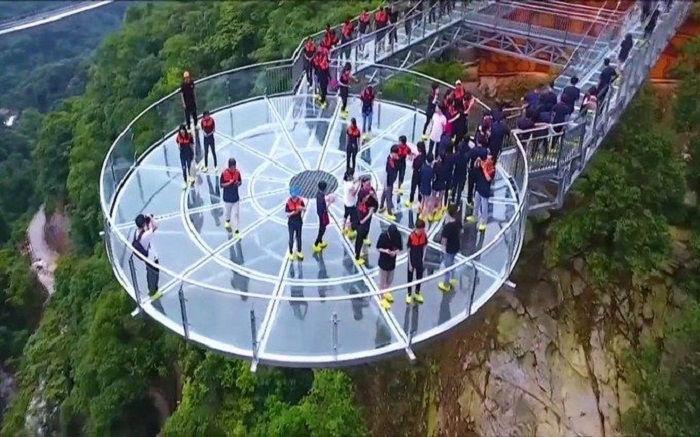 Its extraordinarily complex construction, 200 meters long, has a large observation deck 360 meters above the abyss, barely 30 meters from the edge of the cliff. 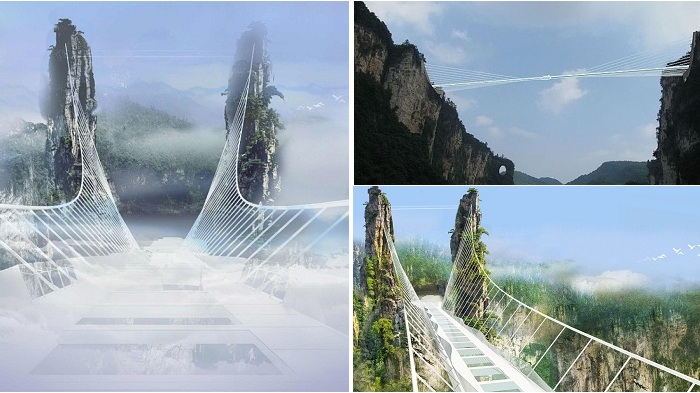 The bridge is based on steel cables, and its surface is made of high-strength triple-layered glass, through which you can see the canyon’s chilling abyss. Despite the outward fragility of the structure, the bridge can withstand loads of up to 800 kilograms per square meter. 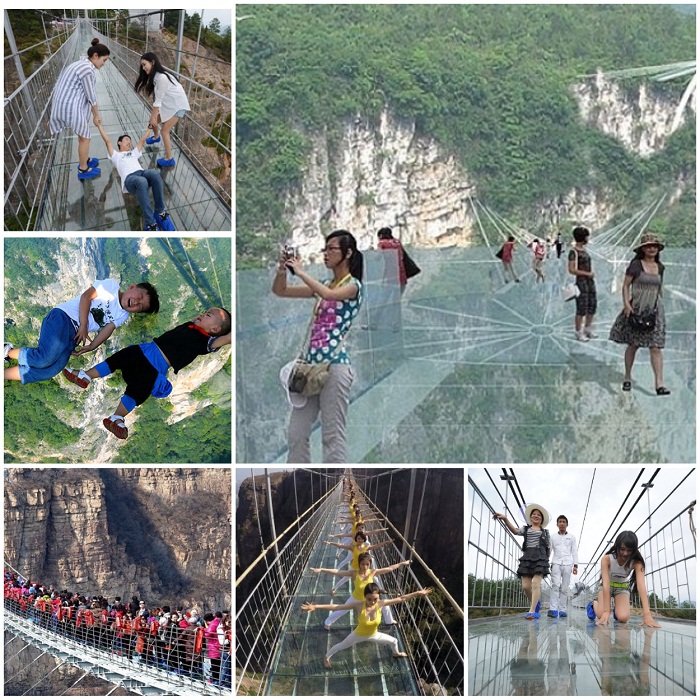 Although it was recently reported that the top layer of glass cracked just because a tourist dropped a metal mug. Visitors on the bridge at the time were not threatened, but the commotion was tremendous.

It is not for nothing that they say the Celestial Empire is ahead of the rest of the world! With one of the most powerful economies in the world, it is here that the most ambitious and expensive super-projects are brought to life, the results of which are simply breathtaking.