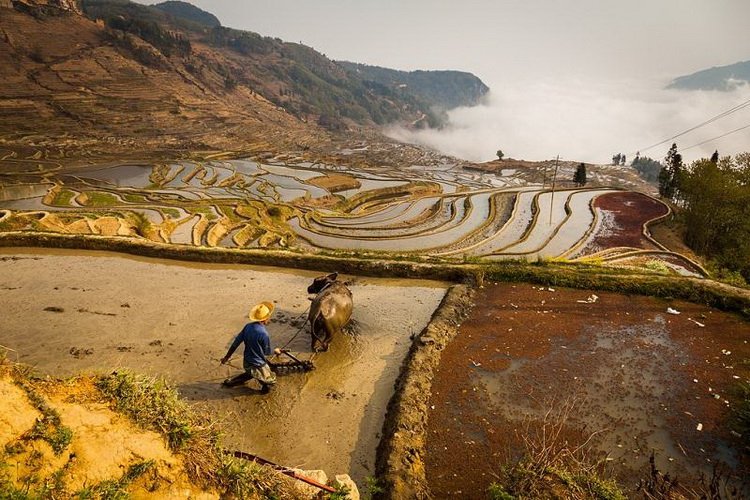 The rice crop has been cultivated for more than a thousand years. Rice has been cultivated in China for about 7000 years. It is good for everything: calories, vitamins, and taste. In general, the Chinese (and the rest of the population of the planet, too) appreciate rice not for nothing. But there are some minor difficulties with the cultivation of this terribly useful grain. You already know that rice needs a lot of moisture. No, not even that, rice needs a lot of water. And it’s fine if the field is flat and there’s a river, lake, or some other body of fresh water nearby. But what can you do if you only have the hills. There is nothing easier – you have to turn hills into many, many small, but still plains.

That’s what the hardworking Chinese Hani people decided and set to work. Manually, piece by piece, meter by meter, people began to transform the landscape. The works on the arrangement of the rice fields began 1300 years ago. Small fields with clear boundaries began to appear on the hillsides. They practically encircled the uplands. Water from springs now began to linger for a long time in artificial reservoirs, which is extremely important for rice. 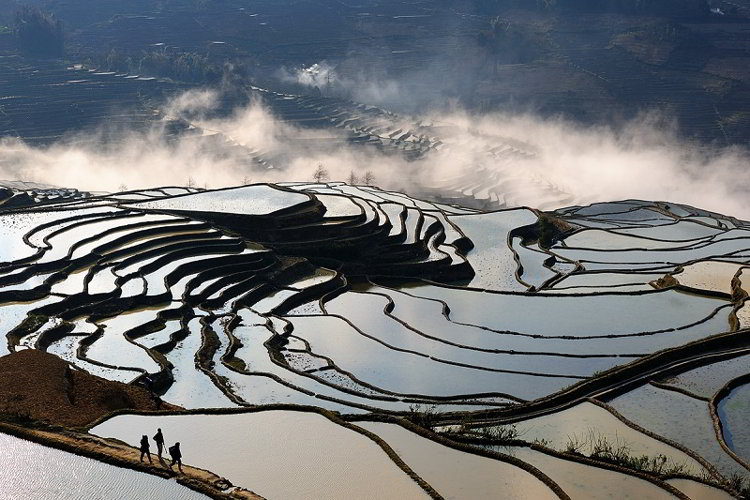 It should be noted that the Chinese carried out the work with special care for nature, without disturbing the fragile ecological balance. A unique irrigation system was built, allowing water (both spring and rainwater) to be evenly distributed over all the fields. Interestingly, irrigation here is completely autonomous and arranged so that the top fertile layer of soil is not washed out. Perfect interaction of man and nature.

By and large, these man-made fields are very reminiscent of the natural cascades of Pamukkale in Turkey or Huanglong terraces in China. The only thing is that rice is also grown on the Honghe-Hani terraces. So to speak, in one place is combined pleasant to the eye and healthy for the stomach.

Today, as a result of centuries of work by the Chinese people, we have an incredible sight and the locals have huge rice fields.

Honghe-Hani Rice Fields on the Map 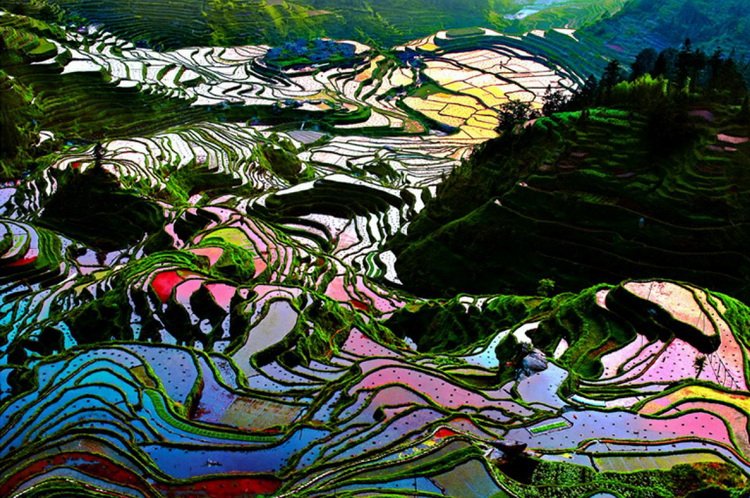 Cascades of rice paddies descend directly to the banks of the Hongha River (also called the Red River). Thousands of mirrors fill the valleys. The water of the rice fields, reflecting the sunlight, fills all the surroundings with marvelous shimmers. But the most colorful section of the fields is 1 to 2 kilometers above sea level. This is where many amateur and professional photographers have taken their best pictures.

But pushing among the crowds of tourists won’t work. First of all, there aren’t many tourists here yet, because it’s hard to get here. The roads are sometimes washed out and the area is quite remote. Secondly, the rice terraces of Honghe Hanee occupy a large area and can accommodate a large number of travelers. The area of the fields is about 126 km2. Sometimes you may come across small booths where you have to pay a little money for the right to visit the sites with the most delightful views. But you can bypass these checkpoints and find no less breathtaking views, thankfully there are plenty of them. But generally speaking, the rice paddies were not created for tourists.

Rice is planted here in April. This is the time when the soil is completely saturated with water. Harvesting begins in September and ends in November. It depends on the height of the terrace. Depending on the time of year and the progress of agricultural work, the landscape here also changes. In summer, the mountain slopes are covered with a succulent green carpet of growing rice.

In autumn, the gold of ripened crops fills the whole space. From November to April, it is an ideal time to enjoy the beauty of the rice terraces of Honghe Hani. During this period, there is no work on the fields, and they are filled with water that reflects the sky, sunrises, and sunsets in a multifaceted way.

Since June 22, 2013, UNESCO has listed these fields as a World Heritage Site.

The culture of rice cultivation in the Celestial Empire has been practiced for about 7,000 years. In those ancient times, farmers discovered that in the fields flooded with water the crops yield ten times more than in the dry ones. The moisture not only destroys the weeds, but also saturates the bottom with nitrogen, thus fertilizing the plants. Farmers who lived in the wetlands, it was enough to plant crops at certain times of the year and then harvest as it ripened, but the inhabitants of hilly areas had to adapt to the existing conditions – they transformed the surrounding landscape, making it suitable for agricultural purposes. Thus, as a result of research and experimentation, rice terraces emerged in China and several other Asian countries.

China’s ethnic minorities, mainly Han Chinese, have been growing rice on the artificially created Honghe Hani terraces for 1,300 years. Generation after generation up the steep hillsides, peasants hand-carved the tiered stepped formations. This process required precision and tremendous effort, as the slightest carelessness could have had the unfortunate consequence of destroying the fragile walls of the basins and the irrigation system, as well as washing away the valuable top layer of fertile red soil.

READ
Miraikan is a museum of the future in Tokyo. Japan. Description, photos.

The most attractive part of the rice terraces to view lies between 1,000 and 2,000 meters above sea level. The artificial fields look as if the location of the pools was chosen at random, but in fact this point was carefully calculated, since the pools exactly follow the contours of the hills, depending on where people can reach them. In doing so, the pristine landscape is preserved, giving the area an even greater picture. The local Hani people have developed an intricate system of canals to carry spring water from the early winter to late spring to the artificial pools on the densely forested peaks. Thus bathed in golden sunshine, the Chinese Honghe-Hani rice fields are considered a fully autonomous, self-irrigating system, arranged so that the topsoil, which is so important for rice, is not washed away by water.

Rice is planted once a year, in April, when the soil is already fully saturated with spring water. Harvest time lasts from September to November, depending on the altitude at which the rice terrace lies. The pools then rest and fill up with water again after a while, gaining strength until the next season.

In accordance with the cycle of agricultural work, the landscape of the rice terraces of Honghe Hanee also changes dramatically throughout the year. In the summer, the mountain slopes are covered with bright green shoots, and in the fall, the landscape is filled with the golden glow of rice stalks. However, the best time to visit the terraces is from November to April, when they appear in all their glory. Tiered fields flooded with spring water reflect hundreds of glints of sunlight in their mirrored surface. One can see the soft dawn, the blueness of the clear daytime sky and the fiery haze of sunset. In late February and early March, the area is decorated with blossoming trees – pink peach blossoms and white pear blossoms. All the richness of colors at different times of the year creates a truly mesmerizing picture.

READ
Borobudur is the largest Buddhist temple in the world. Indonesia The hand-carved rice terraces on the steep hillsides of the Honghe-Hani are a true man-made miracle of human civilization. The system of rational land management that the Chinese use on their land can be called an effective example of the unique ecological and aesthetic harmony between the surrounding world and people. Despite the unique beauty of the local landscapes and the colorfulness of the local ethnic groups, mass tourism has not yet reached this region, mainly because of its remote mountainous location, the lack of an airport nearby, and poor road conditions. But it is thanks to this that the local landscape has preserved its authenticity to this day.

In some areas of the terraces there are booths where you have to buy a ticket (100-180 yuan) in order to get to the site. Of course, there is an option to go without paying, but then you will not be able to go up to some of the observation decks. You can view the Honghe Hani Rice Terraces on your own or with a local guide, Gloria, who will guide you through the most beautiful spots, skillfully bypassing the ticket booths. The best way to get to the main attraction in Yunnan Province is from Kunming County, where a bus runs four times a day to the nearby villages of the rice terraces. It takes about six to eight hours to get there.