House between the rocks – the story of a French landmark

The story of this unusual house, hidden between two rocks, is quite funny.

It became world famous and attracted a lot of tourists. Even too many – the owners hastened to fence off barbed wire from those eager to see their house and banned the replication of its image.

They say it was the postcards that made the little structure so famous. The house itself was built in 1861 and why in such a place – remains a mystery. Or rather, there is an explanation why it could have been built there – because no one forbade it, and people built there as they liked.

Another question is that living conditions here are clearly not ideal – just over a hundred meters from the English Channel, which guarantees constant problems in the storm.

The land around here is not fertile either – it’s all just rocks. So we are left to think that it was just for fun, that is, for fun.

And the trick is worth it: the house is “inscribed” neatly in a cleft between two rocks and thus is located “with its back” to the water. This just protects it from a strong wind. Hence its name – the house between the rocks, although it is more of a purely tourist name, derived from the English The House Between the Rocks. 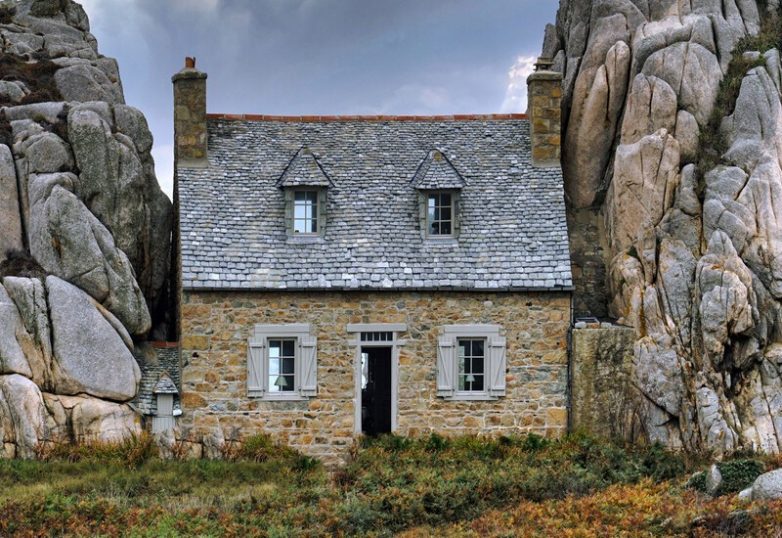 In French it has a simpler name – you can easily find it on the maps by calling it La Maison de Plougrescant (Plougrescant is a small commune in French Brittany). Another name of this house is Castel Meur, which in articles and guidebooks is translated as “A small castle”.

This translation is a bit surprising, as dictionaries translate Meur from Breton as “big”, and from Burgundy generally as “wall”.

However, even if our structure was once called “House by the Wall”, it clearly does not contradict what it actually is.

By the way, in Plūgreskan, they say, were very pleased with the unintentional fame and tourists who began to actively visit the area. Until then, the sights here could not boast much, although you can see, say, a real castle from the 15th century and a chapel from the 11th century. But the holiday was not very long and the reason is surprising.

READ
The Verzasca River is the most transparent river in the world. Switzerland

And the tourists were blamed for it, and there were too many of them, at a certain moment the house was stolen for souvenirs.

Apparently, this happened in the absence of the owners (and they are descendants of those who built Castel Meur), for whom the house is not a place of permanent residence. The final straw was the tourists from Japan who came in a large group and decided to take a collective photo on the roof of the old building.

They wrote in different ways – that the roof collapsed, and that the floors broke, but in general the building was damaged by the “photo fact lovers”. The case was settled by the court, which was addressed by the owners of the house with a demand to stop the outrage.

Specifically, the court demanded, first, to withdraw from sale all postcards with the image of Castel Meur, and secondly, to fence the house with wire and connected electricity.

So all the relatively new photos are exclusively taken from afar.

However, just such a view made the structure famous – so, objectively speaking, it all happened for the best. And according to the latest information, the great-great-great-granddaughter of the first owner now lives in the house. I would like to know if she has a collection of old postcards depicting Castel Meur. 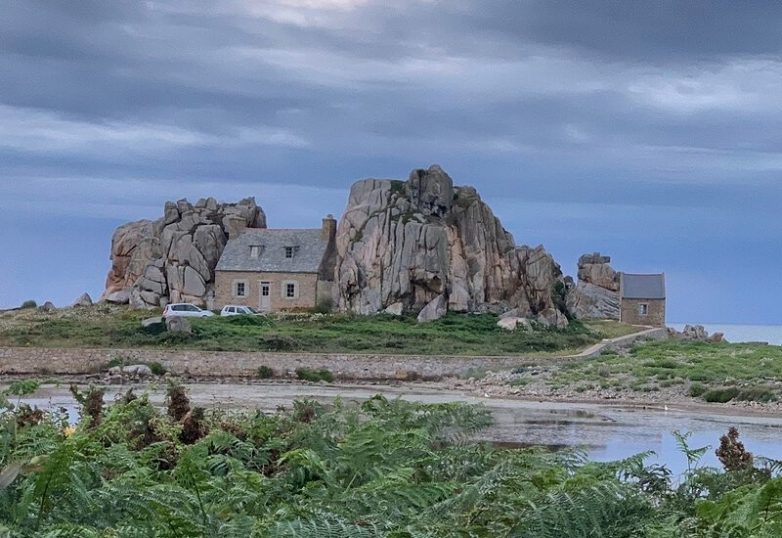 Those who have been there advise not to get frustrated, but rather to walk around – the rocky terrain itself overlooking the ocean expanse is worth it.

TravelRabbit went to France a year ago and, in addition to Paris, we booked an excursion to Normandy.

Ordered on the site moyparis.ru (basically a very useful site for those who are going to France, lots of tips, ranging from maps of the Paris Metro, and ending with how best to visit Disneyland).

The trip to Normandy takes a full day (separately, also a full day, a trip to Mont Saint-Michel) and is accompanied by a guided driver. Perhaps the only downside was that we did not get to the cliffs of Etretat, but the experience was enough without them.

Read more about the tour on the website “Moiparige”, and we will tell you about 10 attractions (both architectural and gastronomic), which, if you want, you can also explore on your own.

For starters, here’s the website – sncf.com – where you can find transportation to your destination from any train station all over France, save it, it will definitely come in handy.

The endless coast of the English Channel

The English Channel, which separates France and Great Britain, is majestic, wild, and impressive. Sandy beaches, cliffs, choppy waves – all this is the world’s most famous strait. Strong northerly winds often blow here, and you can’t see the horizon because of the fog, but that all makes it the perfect place to be alone with yourself.

The most convenient areas to explore the English Channel are the Opalese Coast, which is home to the resort of Hardelo, to the south are Le Touquet Paris Plage and Deauville.

The largest city on the French coast is Le Havre. Here you can not only see the straits, but also enjoy Impressionist paintings at the Malraux Museum. See a calendar of exhibitions and events on the museum’s website.

Getting from Paris to the English Channel Coast: take a train from Gare du Nord to the towns closest to the strait. For timetables, see the website (link to train timetables to Deauville, but you can search for the city you want, such as Le Havre or Le Touquet.

Deauville is one of the most prestigious European resorts, a favorite vacation spot of movie stars, aristocrats and rich retirees. The most famous place of Deauville is the beach with luxurious changing cabins, many of which have the names of the stars, who actually changed clothes here. By the way, this beach is the birthplace of the swimsuit: the fearless Coco Chanel first wore a bathing suit on holiday in Deauville and opened her first store there.

Tip: Prices in Deauville are very expensive, they are artificially inflated on purpose, so if you’re not a movie star, but just a traveler looking into Deauville, then have lunch in the town across the street – Trouville, that’s where all those who work in the tourist establishments of Deauville live.

How to get from Paris to Deauville: again, by train from Gare du Nord, check the schedule beforehand

The tastiest in the world – Normandy oysters

Oysters are a calling card of Normandy. They are large, meaty and very tasty here. It is not the only place where they are grown, there are also oyster farms on the Adriatic and Mediterranean seas, but Normandy oysters have become world famous.

Oysters come in different calibers (1,2,3) and different species. The most popular are Fin-de-Claire, Bellonne, Black Noir. The Fin-de-Claire is considered the most delicious.

You can eat fresh oysters in almost any restaurant that comes across the way in Normandy or buy them at the market, the largest selection is on the market in Trouville. In addition to oysters, there’s a great selection of seafood there.

Honfleur is a small port town. It’s not big but it’s amazing. It seems forever frozen in it on a Sunday morning, so serene, idle and quiet. At every step here sell cider, Calvados, caramel, homemade ice cream.

The town has many ancient buildings, and the most unusual of them – the wooden church of St. Catherine.

If oysters are a must-eat in Normandy, cider is a must-drink. Golden, bottle-caught like the delicate Norman Sun, cider is a weak alcoholic beverage made without the use of yeast. Traditionally it is made from apples, but we liked the pear cider even better, so flavorful and unusual.

The grandeur of the Cathedral of Rouen

Façade of the Cathedral of Rouen

Rouen is the capital of Normandy and probably the French city with the most cathedrals, they are literally a few houses away.

The most majestic of course – the Cathedral of Rouen. It is almost 900 years old, it has not once suffered from natural disasters and wars (during World War II a part of the cathedral was destroyed during the bombing), but this giant, the highest Cathedral of France (151 meters), still rises above the city.

It is in this cathedral, in a sarcophagus, is buried the heart of Richard the Lionheart (such a tautology).

How to get from Paris to Rouen: From St.Lazare station, see the train timetable on the website of the station (travel time – 1,5 h).

The ruins of Château Gaillard

The ruins of an ancient fortress built by Richard the Lionheart stand on a hill along the banks of the Seine. The castle has a very rich history, it was in French and English hands before it was finally ruined by the French king Henry of Navarre in 1699 – it seems it was the only way to get rid of the apple of contention between the English and the French.

By the way, if you are lucky enough to be in this place, we advise you to go for a walk by boat on the Seine, you can order a walk on this site.

How to get from Paris to Chateau Gaillard: Take a train from Rouen, and from Rouen take a cab to the chateau.

The silence of the narrow streets of Rouen

The most beautiful (in some places quiet, in some places not so quiet) streets are located in the area between Market Square and the Cathedral of Rouen, in the block to the right of Rue de Gros Orlage. Rue Jeanne d’Arc also has a walk down to the Seine and along the promenade.

The Cliffs of Etretat

This is Normandy’s most famous non-handmade landmark. The chalk cliff, which looks like an elephant lowering its trunk to drink water from the English Channel, is located on the Alabaster Coast, near the small town of Etreta. The elephant rock is called Arc la Mannport, and there are many others besides it: the Rock of the Needle, the Rock of D’Amont, and the Rock of D’Aval. In addition, between the rocks you can bask on Alabaster Beach.

How to get from Paris to Etretat: From St Lazare station to Le Havre, then take bus 24. The timetable for bus 24 is here.

The French modestly call this place “the Eighth Wonder of the World. The abbey is located on an island in the bay of Saint-Michel, at the entrance to the open Atlantic Ocean. Mont Saint-Michel is 2 kilometers from the mainland and is unique not only because of its Romanesque graceful architecture, but also because, depending on time of day, the ocean waters recede, exposing the land between the island and the mainland, or come again, completely enveloping the abbey.

How to get to Mont Saint-Michel from Paris : From Montparnasse station to Rennes and then by bus (from Rennes station) to the Abbey.