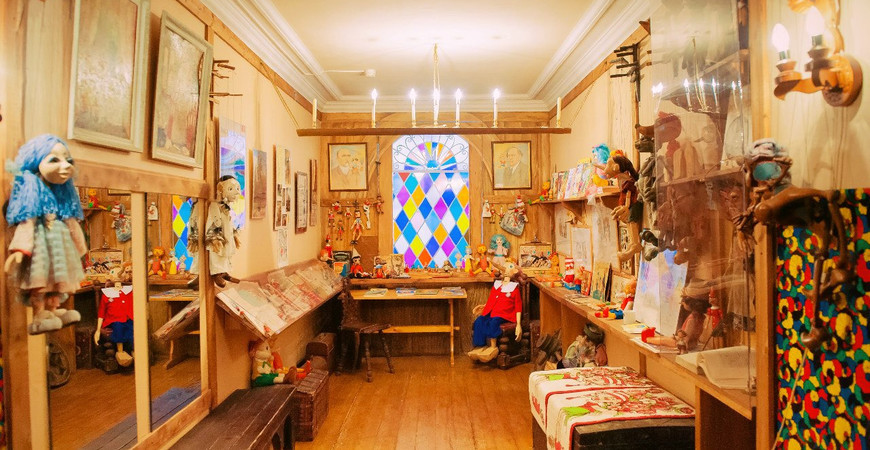 Museum of Russian fairy tales on VDNKh is not working. You can visit the House of Fairy Tales in Izmailovo Kremlin and the Pinocchio Buratino Museum on 2nd Park Street.

The House of Fairy Tales “Once Upon a Time” Children’s Museum was founded more than 20 years ago by a charitable foundation “Russian Family”. The Museum of Russian Fairy Tales was originally conceived not as a single museum, but as a whole network of museums, each of which is dedicated to a particular character of fairy tales or an individual writer of fairy tales. At the moment, in addition to the “Once Upon a Time” House of Fairy Tales in Izmailovo, there is a branch, the Pinocchio Pinocchio Buratino Museum, in the same neighborhood, on 2nd Park Street.

The concept of the museum involves theatrical tours with fairy-tale characters, who introduce children to classic Russian folk tales in an entertaining way. Not only the guides, but also the audience dress up as fairy tale characters.

House of Fairy Tales also has its own museum collection, which has more than 400 items: they include household items and costumes of various fairytale characters, dolls, books, and more. It is noteworthy that almost all of the museum items are used in excursions by presenters and children alike.

The museum has been awarded various government certificates, has Russian and foreign diplomas, and has repeatedly won grants for its activities. The House of Fairy Tales is known not only in the Russian museum community, but it is also world famous as a member of the European Association of Children’s Museums “Hands On! Europe”.

Since the main activity of the museum “House of fairy tales” Zhili-Byli “- is a tour, a visit is by appointment only.

The price of a museum ticket is 800 rubles.

Benefits are available for children from large families, pensioners – the ticket price is 600 rubles.

READ
Moscow Lights Museum, description of expositions and how to get there

House of Fairy Tales holds various charity events for children from socially disadvantaged families, orphans and children with disabilities. Collective visits to children from boarding schools, correctional schools and orphanages are free by prior request.

The museum is designed for children from 3 to 12 years of age. Tours for very young children from 3 to 6 years are conducted only together with an adult. For example, at a special program “For the little kids about fairy tale animals,” the adults help the children turn into fairy tale animals, and play and dance together with the children. Before visiting this excursion organizers recommend to read to children Russian folk tales: “Repka”, “Hen Ryaba”, “Teremok”, “The Fox and the Wolf”, “The Fox with the Little Skazka”, “Kolobok”.

All excursions to the House of Fairy Tales take place by appointment and according to the schedule that can be found on the official website of the museum.

In total, the repertoire of the museum includes about ten thematic tours dedicated to various fairy tales or storytelling writers.

Excursion “The green oak tree by the Lukomorye…” is devoted to A. S. С. Pushkin, whose fairy tales are introduced to children by Tsarevna Swan herself. And in the excursion “Treat for the Snake Gorynych” the guide will be Baba-Yaga. The visitors together with her will think what kind of food to treat Snake Gorynych and at the same time they will learn about different traditional dishes that can be found in fairy tales of the peoples of the world.

The museum also offers tours of the fairy tales by Charles Perrault and Korney Ivanovich Chukovsky.

All tours are interactive and accompanied by various riddles, games, roundelays, so children are never bored.

The most convenient way to get to the Museum “House of fairy tales “Zhili-byly” is certainly the subway.

The cultural and entertainment complex “The Kremlin in Izmailovo” is within walking distance from Partizanskaya subway station (10 minutes) and the MCC Izmailovo (15 minutes). An online map will help you navigate the large cultural area of the Kremlin, the House of Fairy Tales is marked with the number 12.

For those who arrive by car, there is a parking lot near the Kremlin in Izmailovo.

You can also use cab apps operating in the capital: for example, Yandex. Cab or Gett. 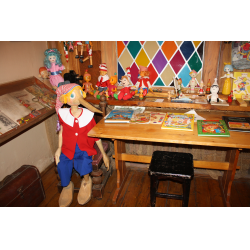 Hello dear friends and readers of my review! I can’t help you without visiting one interesting place, namely the museum “Pinocchio Pinocchio” on 2-nd Parkova street. The museum exists for many years, but I can’t say exactly how long it is.

A fabulously cozy place, created by kind and talented people: authors, actors and artists. Immersion into the fairy tale is very natural thanks to its chamberness. You can see the performance and take part in it. Everyone is thrilled, even the adults.

Expensive and for aficionados

There are many interesting places to go with children in the Izmailovsky chair. Among others, the house of fairy tales “Once upon a time”. There is not only a platform for performances, but also a small museum corner, which will certainly interest children. To get in.

The child came out absolutely delighted.

The museum is located in the Izmailovo Kremlin. Came to the performance “Visiting Baba Yaga. There were actually a lot of different programs. We did not know that you have to book in advance. We went to the museum at 12-55 just for fun.

READ
Museum of nomadic culture in Moscow, description and addresses of yurts

Unpleasant impression of boorishness and extortion.

Went today with my class. Came at lunch time, brought the kids food, we almost kicked them out on the street in the freezing cold. They said they can’t have food we brought with us. The children are without.

It was good, but the impression was unpleasant.

Good afternoon dear readers of my review! I want to share with you my impressions of visiting the museum “House of Fairy Tales “Once Upon a Time”. I took my students on an excursion to this museum. I must say that the museum is quite popular and there is a lot of excitement.

It’s kind of boring and you can’t take pictures!

We took the kids and their class on a school field trip. Everything in the museum is very beautifully decorated! BUT during the performance it is strictly forbidden to take pictures! Baba Yaga, who led, made very ugly remarks to the adults, who very carefully and inconspicuously tried.

The company violates the laws of the Russian Federation, the administrators are unprofessional.

The children’s fairy tale house “Zhili-Byli” violates the laws of the Russian Federation and prohibits at will photo and video shooting, including their own child. An illegal sign prohibiting filming is posted. The administrator and performers do not speak to the visitors inappropriately.

Came with two children 8 and 2.5 years old. Said that just no viewing. The younger one won’t be allowed in at all and the older one will be added to some group. With a little I was advised to wait outside for a couple of hours. Ie.

In the House of Fairy Tales “Once upon a time” at the All-Russian Exhibition Center went in December 2014. The price for the interactive New Year’s performance and a gift (book) – 1400 rubles per child. We prepaid through the bank, we paid the rest on the spot. As we were told.

The kids really liked it.

We went on a guided tour to the museum a couple of days ago. First of all difficult to find the pavilion. Pavilion itself is beautiful, but crumbling, in need of repair. The museum itself takes a small corner of the trays with seeds. Excursion in fact is not even a tour.

Pinocchio Pinocchio museum – a branch of the “Once upon a time” fairy tale house.

During the first fall break, the parent committee of our middle son’s class offered to take the children to the Pinocchio Pinocchio Museum, a branch of the children’s museum “House of Fairy Tales “Once Upon a Time”. It was said and done, let’s go. Frankly, nothing good from.

Our 2nd grade class celebrated New Year 2017 at the VDNH at the “Once Upon a Time” Museum of Fairy Tales. The price is not small, for one child 1700r. with a gift (book of fairy tales) in a branded bag Zhili-byli. Children were divided into two groups, as there.