Bangkok, with a population of about 10 million people, covers an area of 1500 square kilometers, the attractions of the city are scattered throughout its territory, but despite this, you can get to any point of interest in Bangkok quickly, cheaply and without too much trouble, and all thanks to the Bangkok subway, a convenient, reliable and practical type of transport.

How the Bangkok subway differs from our subway. Above-ground subway lines and zonal charging.

Before we get to the story of how to use the Bangkok subway, it’s worth listing its main differences from our subway.

After you have listed the differences between the subway in Bangkok and domestic subway, it is time to talk about the Bangkok subway tariffs and working hours, and lay out a subway map of Bangkok, relevant to the year 2022.

The above Bangkok metro scheme is clickable, by clicking on it you can get to a more detailed map where you can see not only the metro stations in the central part of the city, but also stations located in the suburbs. You can see a metro map of Bangkok with sights here: Bangkok Metro and Sightseeing Map.

How to use the Bangkok Metro. Step-by-step instructions for Skytrain and MRT lines.

For the Sukhumvit line and the Silom line, both operated by BTS, these step by step instructions are as follows:

For the MRT Blue line and MRT Purple line, which are operated by an MRT operator, the steps are slightly different.

READ
Money exchange in Thailand, not to be cheated

It is worth saying a few more words about how to use the subway line connecting Bangkok with the airport, the Airport rail link. The procedure for buying tickets here is no different from the MRT line. Read more about this Bangkok metro line separately: How to get to Bangkok from the airport cheaply. Metro line from the airport to Bangkok.

One-day pass costs 140 baht, the number of trips is unlimited. Refillable Rabbit card costs 100 baht (plastic price) plus you put a minimum of 100 baht on it for future trips. When you use this card you get a fantastic discount of one (1) baht per trip.

The lines on the map are depicted as follows: the Sukhumvit line (light green), the Silom line (dark green), the MRT Blue line (blue), the Airport rail link (red), and the railroad lines (black). Looking at this map of the Bangkok Metro, you can easily understand from which particular metro station it is easiest to get to the attractions you want.

Bangkok subway: Features of transport, how to use

The Bangkok subway is a comfortable and the fastest way to travel in the capital of the country of smiles. Regardless of the chosen direction and the type of subway, you will get to your destination quickly, and most importantly without traffic jams. The undoubted advantage of the subway in Bangkok – the ability to overcome the maximum distances in the minimum period of time and reach the desired attractions, even outside the capital. The only nuance that somewhat overshadows travel in the Bangkok subway is the high cost. Paying for a trip over long distances is comparable to taking a cab. 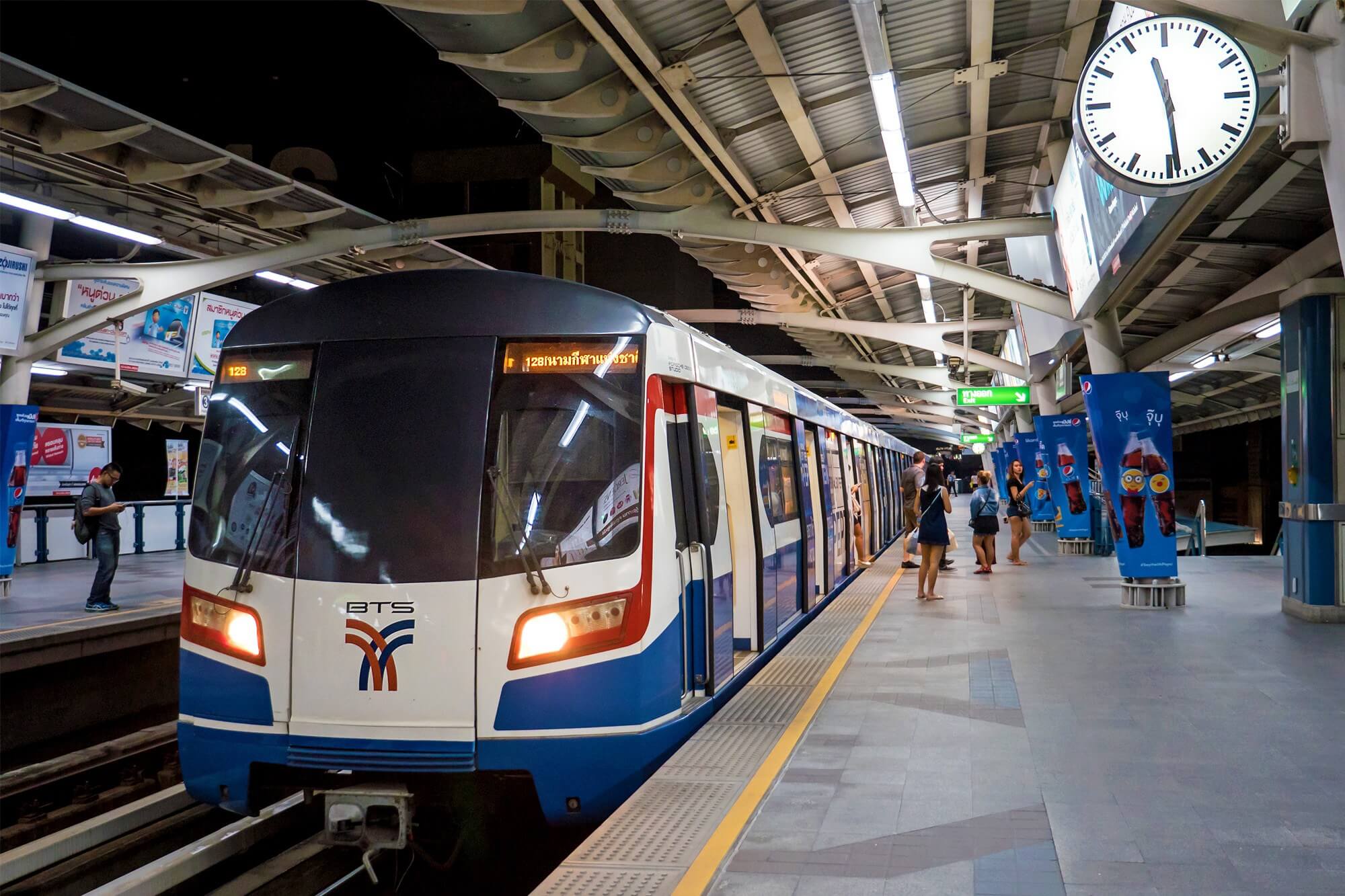 Subway in Bangkok – a real salvation for the metropolis, which resembles an anthill. We will tell you in detail about the subway scheme, the operating lines, the cost of tokens, cards and tickets, the rules of transport in Bangkok.

Why does Bangkok need the subway so much? Construction in the metropolis has always been active and chaotic. This threatened transport collapse, to avoid problems, the government decided to provide residents with transport that:

The first branch opened in 1999. Today, the Bangkok metro scheme covers all districts and is undoubtedly the most convenient urban transport.

The Thais are justifiably proud of their sky train. The elevated subway was built exclusively by local companies. Travelling in such a train is not just a way to get to your destination, but a great opportunity for a self-guided sightseeing tour. The fact is that the elevated trains ride over all urban transport.

READ
Souvenirs from India, what to bring and buy as a gift 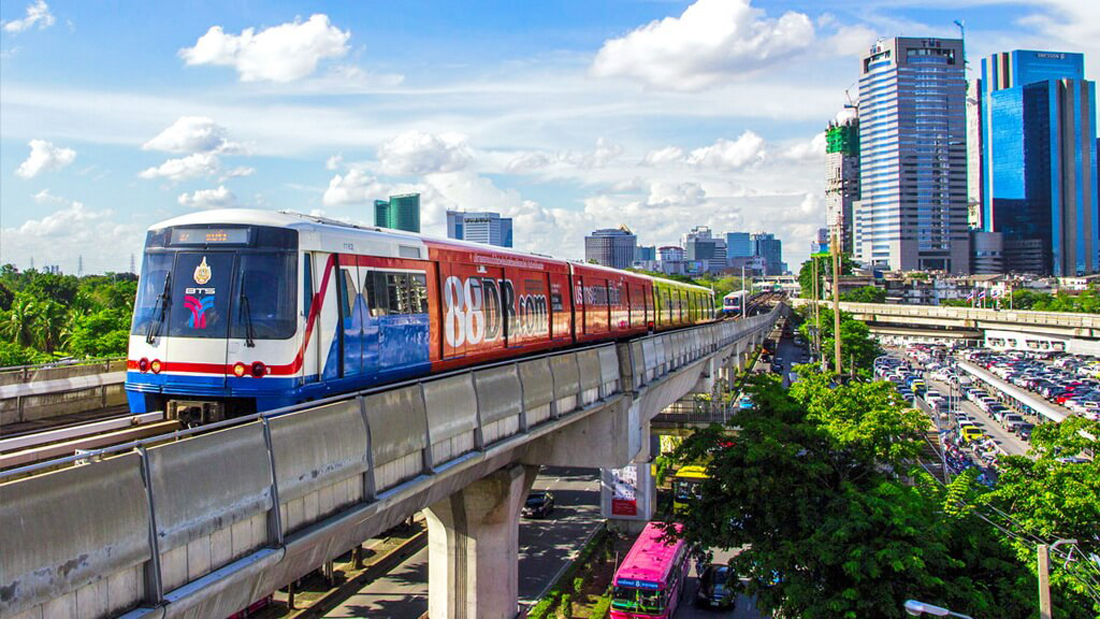 Good to know! If you want to enjoy the panorama of Bangkok, try to take seats in the outermost cars of the train, the windows of other cars are often covered with advertisements.

Stops are announced twice, in local and English.

The diagram of the elevated subway is simple, intuitive, and marked in three colors: blue, light blue, and green. Recently, another line in purple has appeared on the scheme. Names of Bangkok subway stations are denoted by a letter, which means the side of the world, as well as a number – the distance in kilometers from the central districts of the capital. 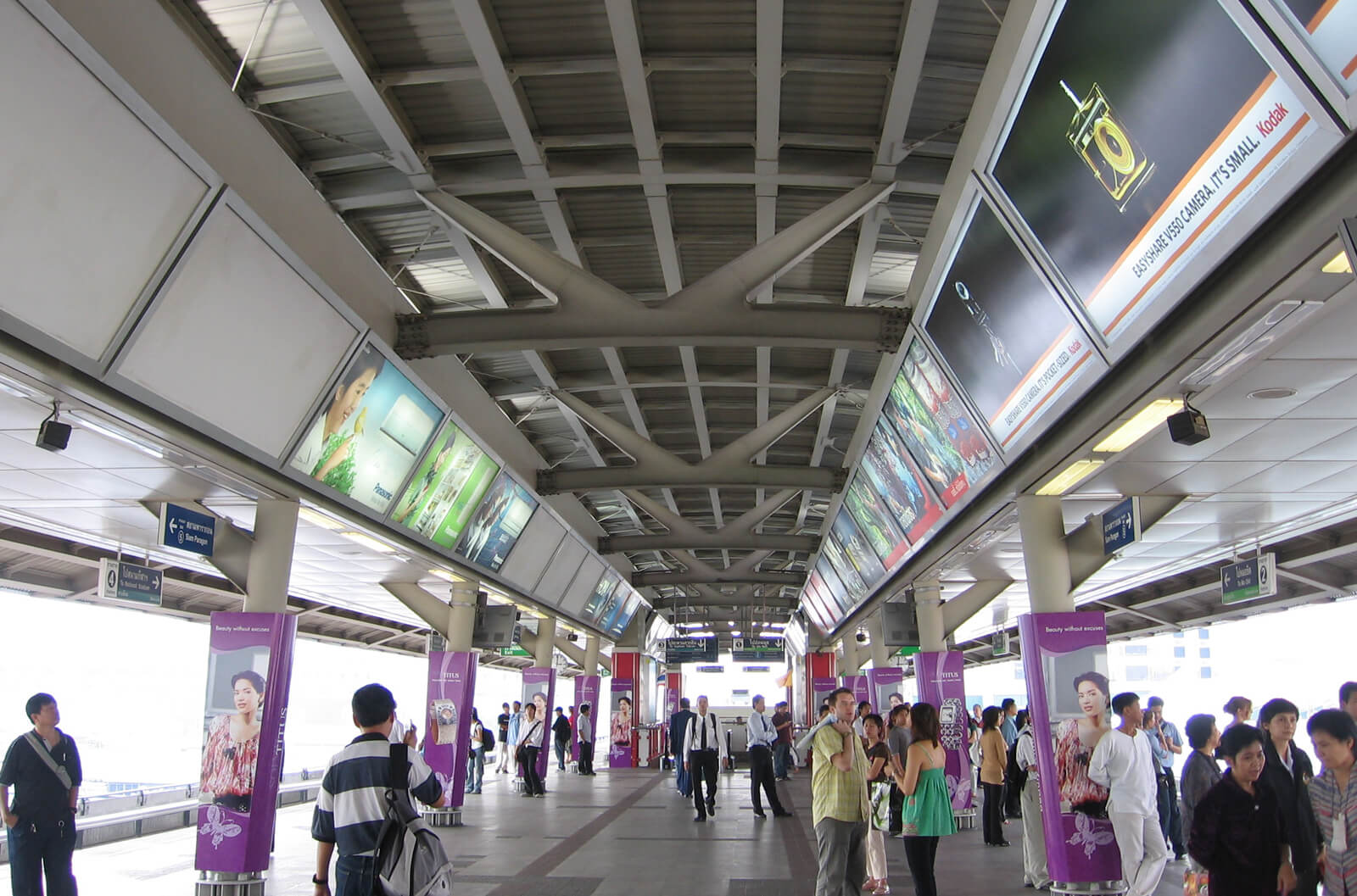 Nodal stop – Sayam, here you can change the direction of travel – to change from the dark green line to the light green line.

Good to know! Do you want to visit the entertainment district? Look for stop S2 on the map and take the dark green line. 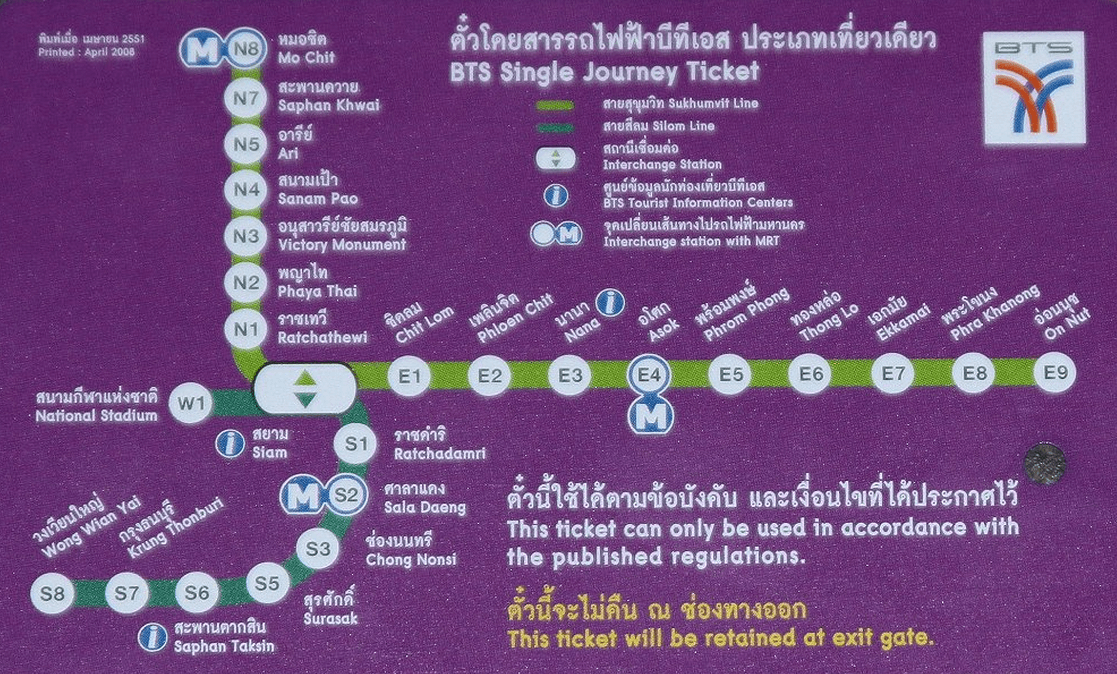 There are three types of cards in the elevated subway:

Tourists tend to take advantage of the above-ground subway map because it covers almost all of Bangkok’s tourist attractions. The fare is determined by the number of stations to be traveled.

Underground transport is used more and more often by locals, so if you are interested to join the life of Bangkok, make a few trips to the underground, but take care in advance and print the scheme of lines with the indication of the stations in Russian. On the Bangkok subway map, the underground line is marked in blue. It covers the northeastern districts of Bangkok, where there is a concentration of residential houses and almost no sights. 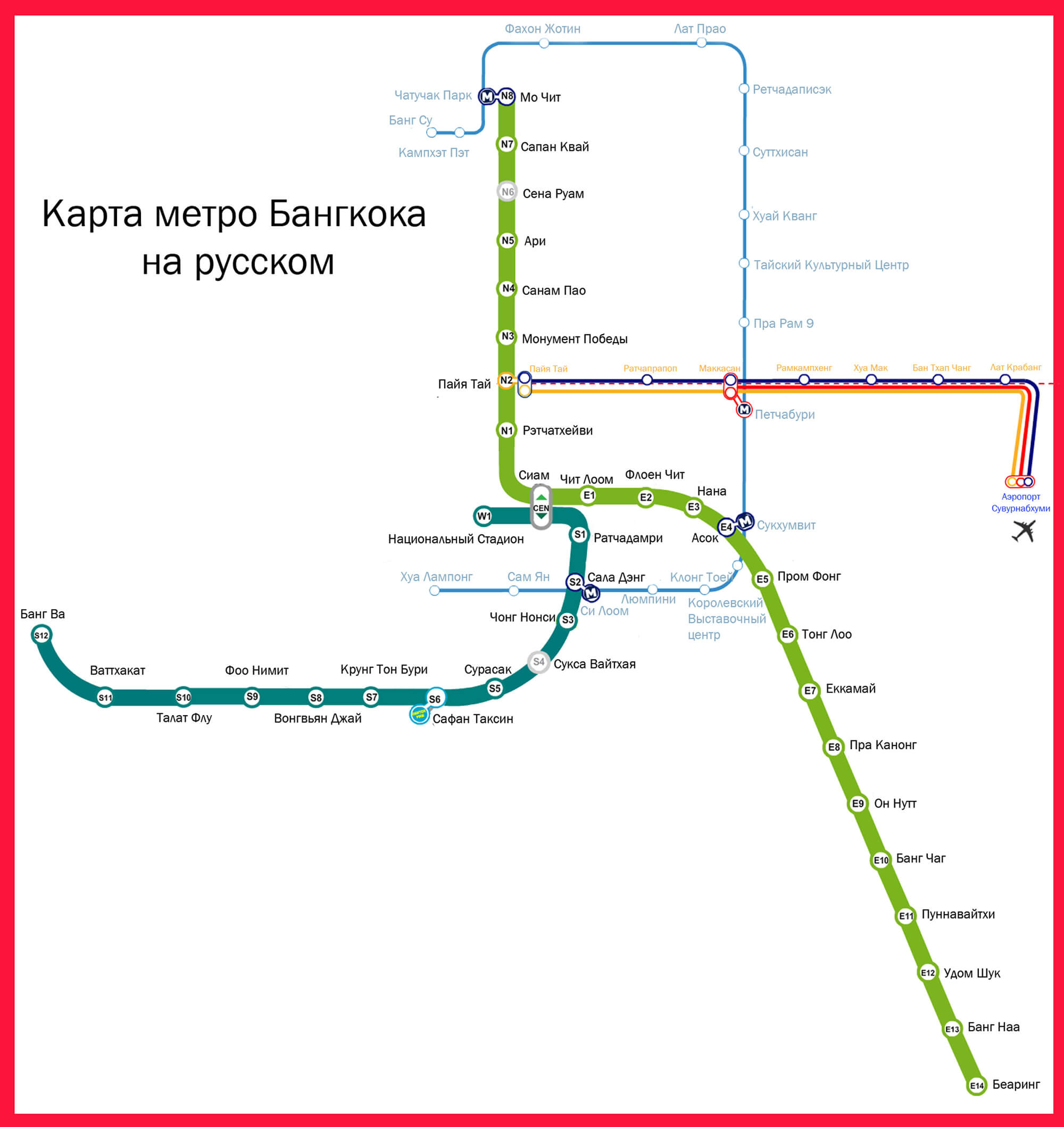 There are three stations on the subway scheme that intersect with the elevated subway.

On the scheme is a red line, it is also called – underground electric train. The journey from the airport terminal to the central districts of Bangkok takes only a quarter of an hour. Today there is only one branch on the scheme of the airport subway, so there are no difficulties with the choice of tokens and cards. The fare is determined according to the length of the route.

Scheme of the airport subway.

Types of tickets and fare

Where to buy tickets and what to do

At all stations listed on the subway map, there are vending machines where you can buy tokens for a single trip. Documents for other number of trips are presented in the cashier’s office, they also operate in the subway stations. 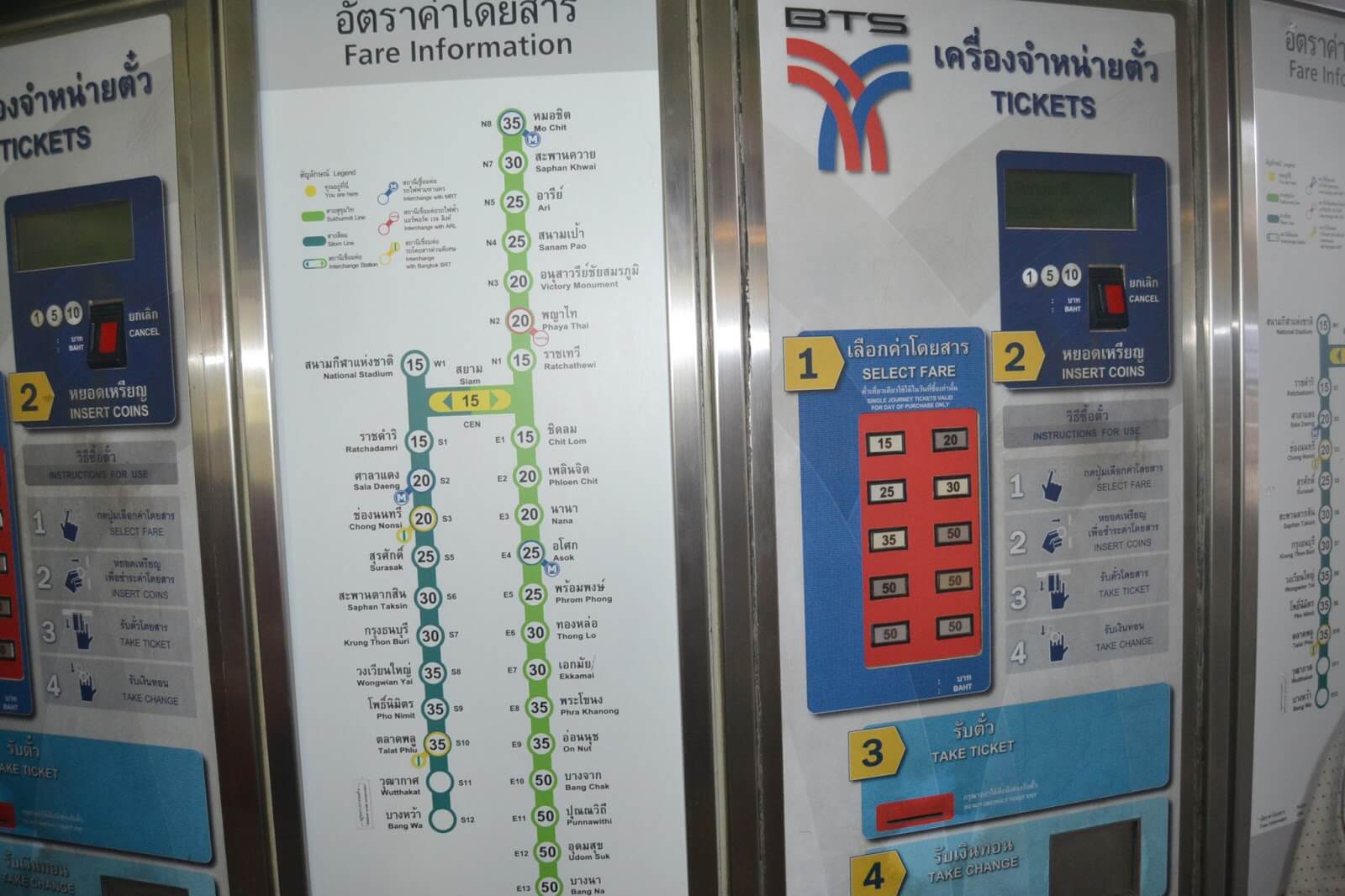 There are three types of machines that you can use to buy tokens for travelling on underground trains.

Good to know! If you do not have banknotes of the required denomination, change them at the nearest ticket office.

You can buy a ticket for the subway as follows:

Airport subway tickets can also be purchased from vending machines at the stations.

How to use the subway in Bangkok

It shouldn’t be difficult to use the subway in Bangkok. The machines are simple and intuitive even for tourists who do not know English. 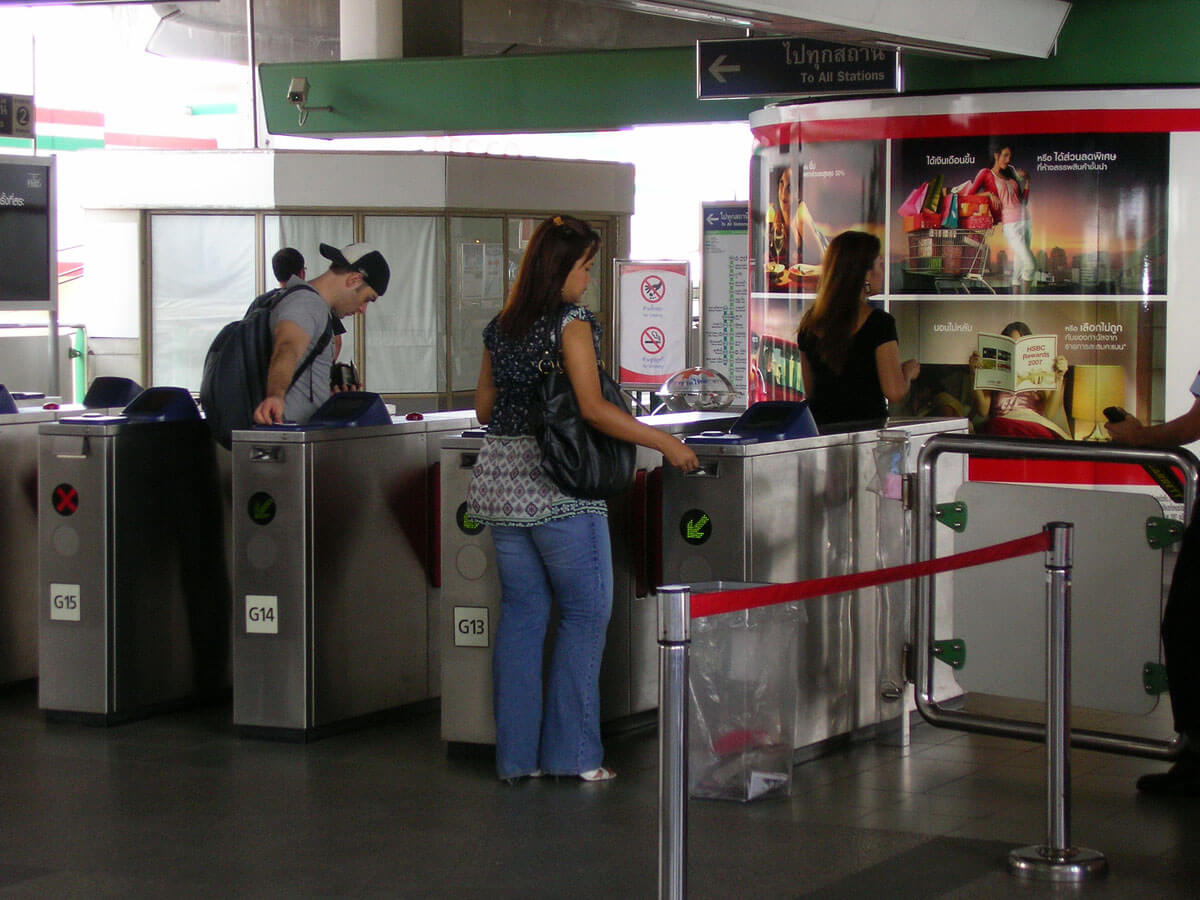 First of all, you need to buy a ticket (travel card). All travel documents are valid for all overhead lines, you can also change branches.

The ticket (card) is used to pass through the turnstile at the departure and arrival stops that you specified when purchasing. If you try to use the document at the wrong stop, the turnstile will not work.

Useful to know! You will be able to get off at another station, provided that the fare is the same as the paid amount. 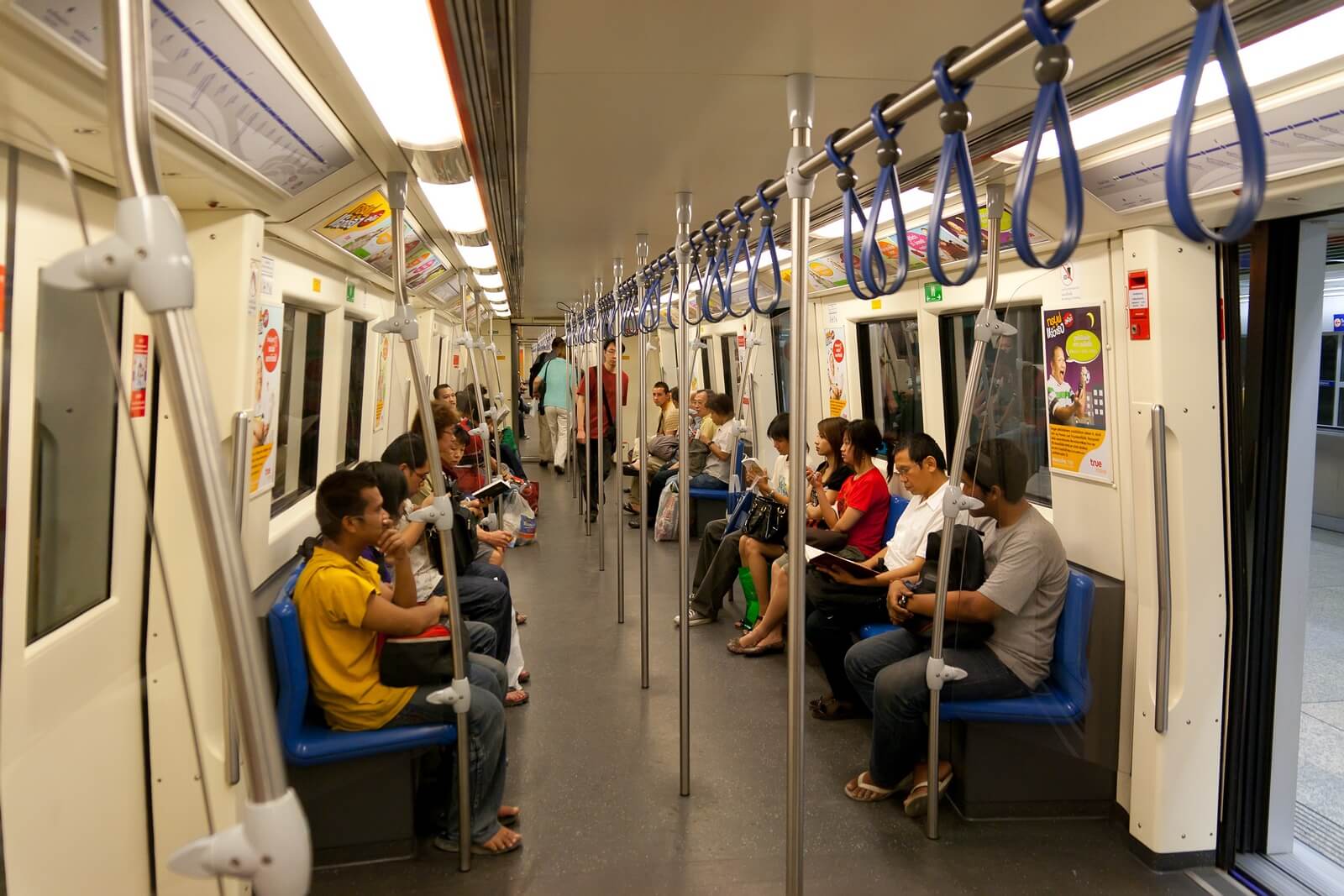 Subway is relevant when you need to get to the train station. To go down to the station will need a season ticket or one-time token. Where to buy them described above.

The control of the fare is also at the entrance and exit of the subway. That is why the ticket, token or card must be kept for the entire trip. Remember that each ticket provides a certain amount of time to stay in the paid metro area. The maximum travel period is 90 minutes. After this period, the passenger must pay a fine of 40 Baht.

Interesting facts and features of the metro in Bangkok

Despite the huge passenger traffic in the capital’s metro, the first thing that tourists and travelers immediately note – order and impeccable adherence to the rules. The work at all the stations marked on the scheme is orderly and subject to the approved regulations. You will never see passengers shoving and arguing in the subway. Boarding and disembarking are calm and orderly. 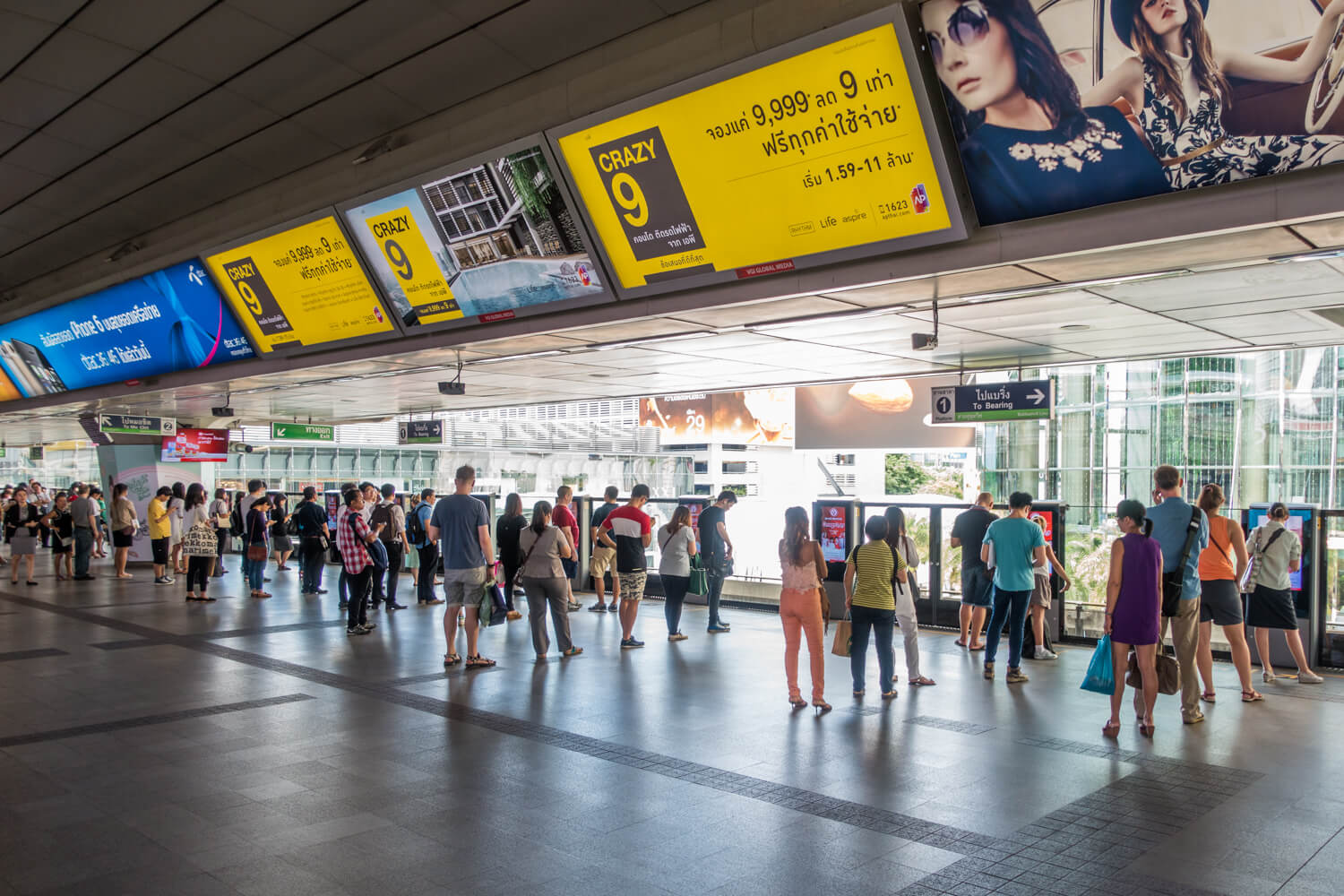 Many platforms have hermetically sealed glass doors, sealed until the train arrives. Discounts are available for children as well as older passengers. 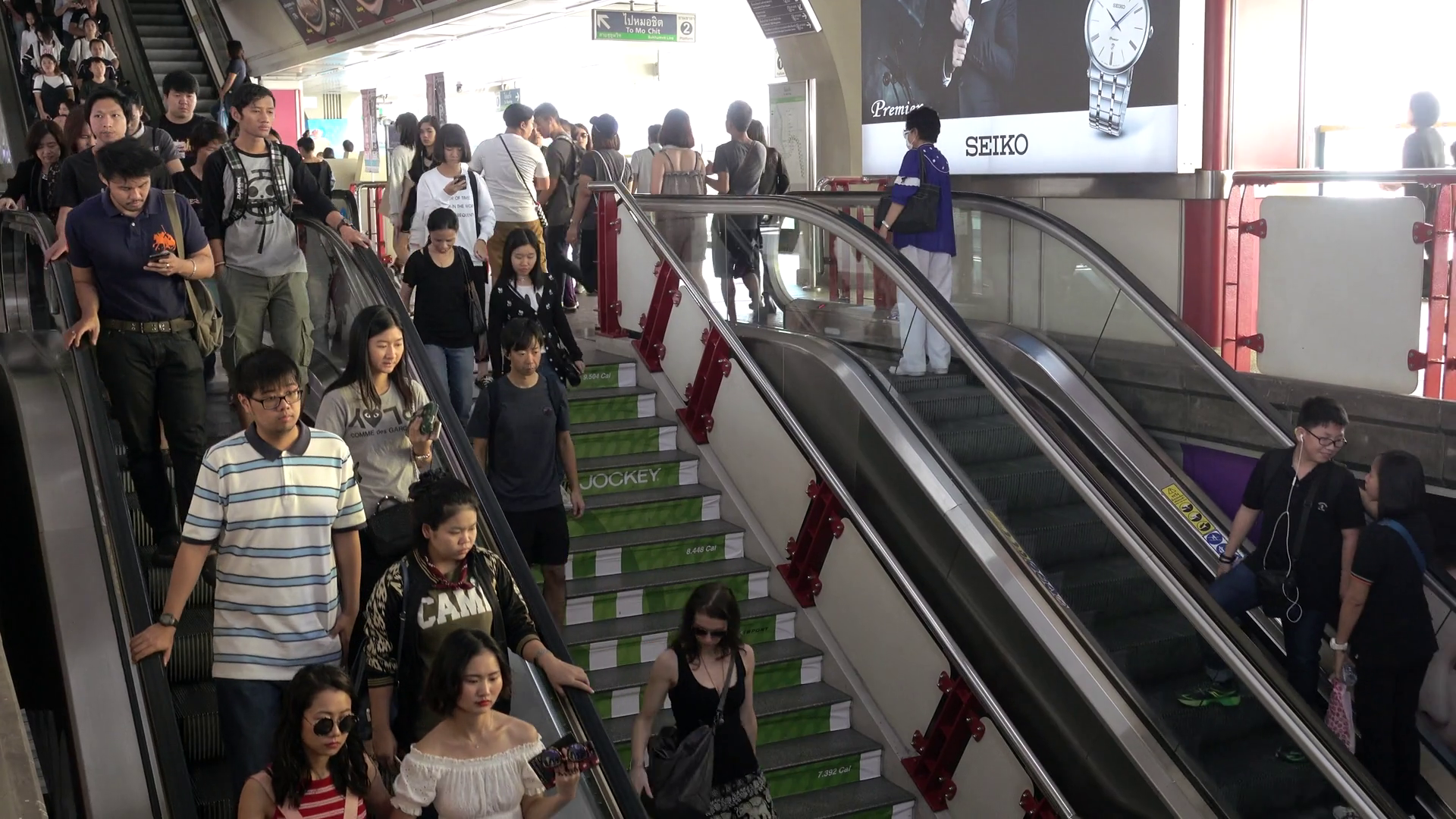 Planning your trip, be sure to take with you Bangkok subway scheme in Russian. It will facilitate navigation in the capital and allow you to visit the maximum number of attractions.

Now you know what the Bangkok subway is a convenient and fast way to get around the capital of Thailand. Travel with pleasure and comfort.

Updated: 7 Mar, 2021 Tourists who travel to the Portuguese capital often use…

Updated: 1 Apr, 2019 The Athens Metro is a fast, affordable and incredibly convenient…