Huacachina is a city in the oasis. Peru

Huacachina (originally Huacachina) is a small village built around a desert oasis in Peru. The oasis is surrounded by beautiful sand dunes and palm trees. It resembles the classic corners of the Sahara Desert, but is located on the other side of the world. 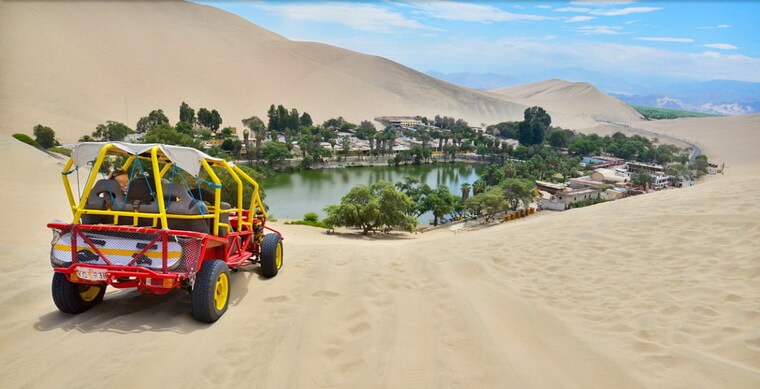 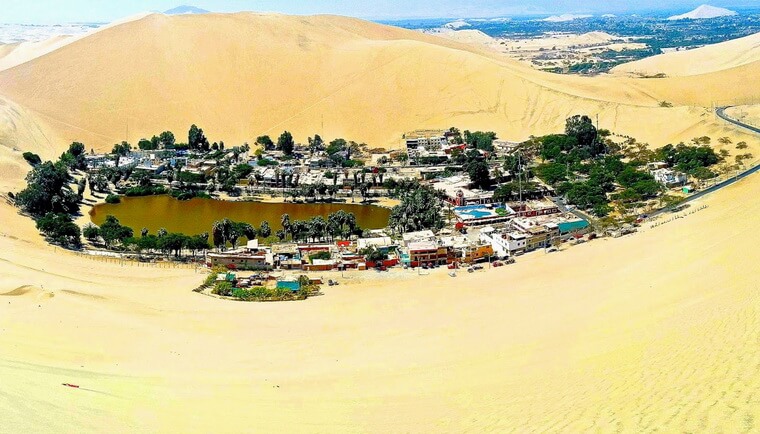 General description of the Oasis of Huacachina

At its center is a lagoon measuring approximately 200 by 110 meters. And the total dimensions of this unique place are about 480 by 340 meters.

In the 1940s, the oasis became a popular resort for wealthy Peruvians. It was believed that the waters of the lagoon have medicinal properties and can conquer arthritis, rheumatism, asthma and bronchitis. Many people bathed here in the hope of a cure. Several hotels were built near the lagoon, as well as streets and alleys.

In the 50s, the oasis lost its tourist importance and was abandoned for several decades.

A second life was breathed into Huacachina by local businessmen in the 1990s. They began offering tourists the opportunity to ride the giant sand dunes in four-wheel-drive buggy cars. A little later, sandboarding, from the words sand and board, became popular. It’s almost snowboarding, but on the sand.

Today the permanent population of Huacachina just over 100 people (not counting tourists, of course). 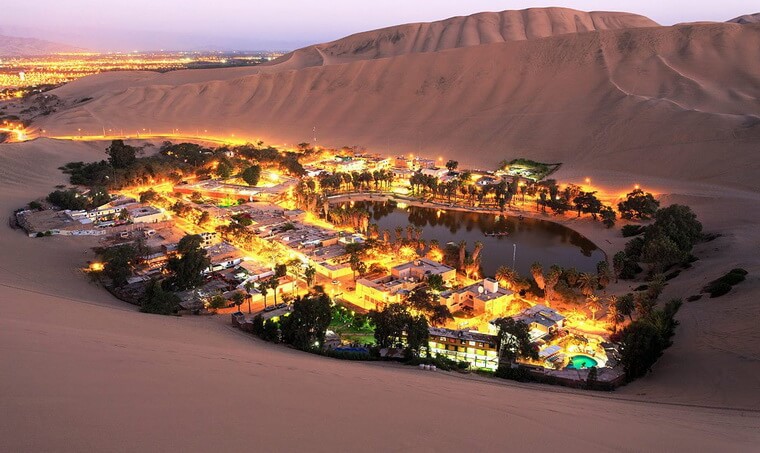 Oasis of Ouacachina in the evening

The problem of the oasis

A big problem for the oasis has been the cessation of water flow to the lagoon since the 1980s. Private landowners around the oasis built wells, which drastically reduced the water level in the lagoon. To restore it, a plan was developed to pump water from a nearby farm. The process of artificially filling the reservoir began on April 2, 2015, and since then more than 73,000 cubic meters of water has flowed into the lagoon, raising the water level by as much as 3 meters.

Despite the beauty of the lagoon, swimming in it is not recommended. No, the water is safe, but rather murky. 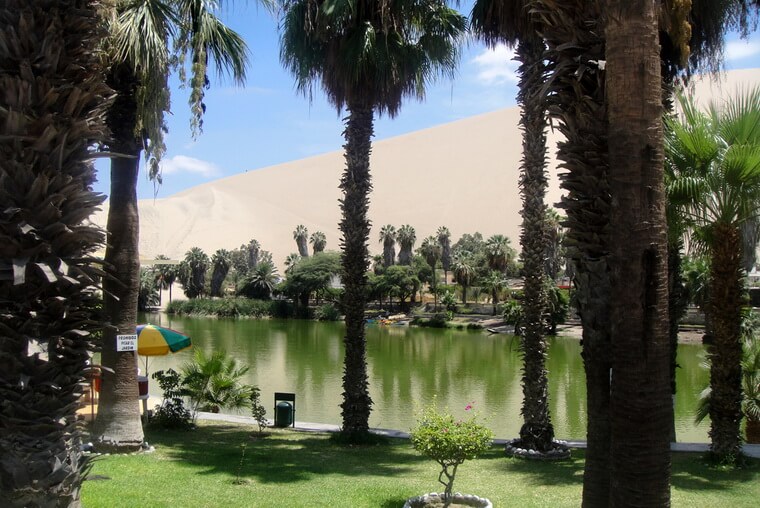 Legend of the Ouacachina Oasis

According to legend, one day a beautiful princess was going for a swim. As she began to undress, she suddenly saw a young hunter approaching in the mirror. Frightened, the girl ran away, dropping the mirror, which became a lake in the middle of the desert.

According to another version, the girl turned from fear into a beautiful lagoon and her clothes into sand dunes. The locals claim that the beauty became a mermaid and still lives in the lagoon. They even erected a peculiar monument to her. 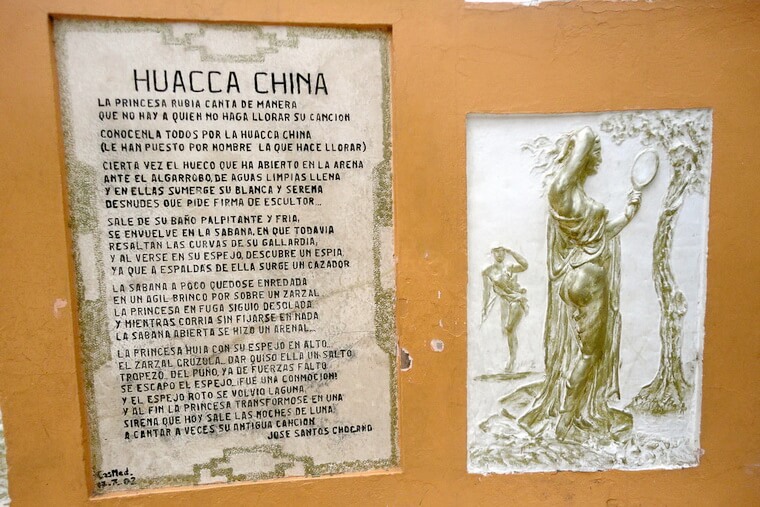 The legend of the Oasis of Ouakachina

Currently, Ouacachina is a popular tourist destination in the country. It is a great stop on the way from Lima to the legendary city of Machu Picchu in Cusco.

Here you can take several excursions to local attractions.

The most famous tour in Waukichina is the DUNE BUGGY AND SANDBOARDING TOUR. This popular tour includes a buggy and sandboarding (remember, it’s about like snowboarding, but in the sands) ride through the huge sand dunes. 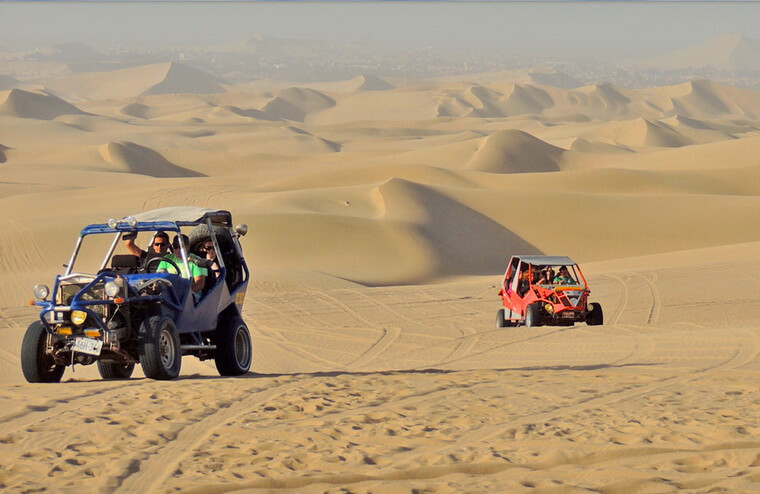 Since it is very difficult to board down the sand, most campers end up boarding sitting up or on their stomachs.

Tours are usually dispatched several times a day. HUACACHINA.com in particular offers tours at 10:00, 1:00 and 4:00 pm. And the 4:00 p.m. trip is preferable, as the temperature in the desert at this time is optimal, and the tour lasts 45 minutes longer than the previous ones.

A short drive from the oasis are wineries that produce wine and the famous Pisco spirits.

This is a tour where tourists can learn how Peruvians make red wine and Pisco, a strong grape brandy that is even Peru’s national drink. These alcoholic beverages have been around since the Spanish conquistadors brought grapes to the New World and forced the locals to grow them.

Excursion to the Ica Archaeological Museum

A small but informative excursion to the Ica City Museum will introduce you to the history of the region. You will see mummies, pottery and textiles made by ancient tribes.

This tour takes you to the village of Paracas, 80 kilometers northwest of Huacachina. Then you go to the Balestas Islands by boat. Here you will have the opportunity to see many birds and mammals, including Humboldt penguins, sea lions and seals. 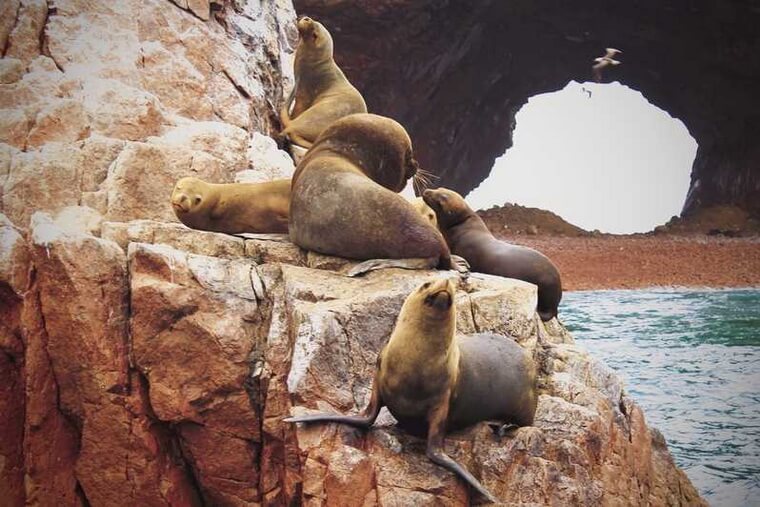 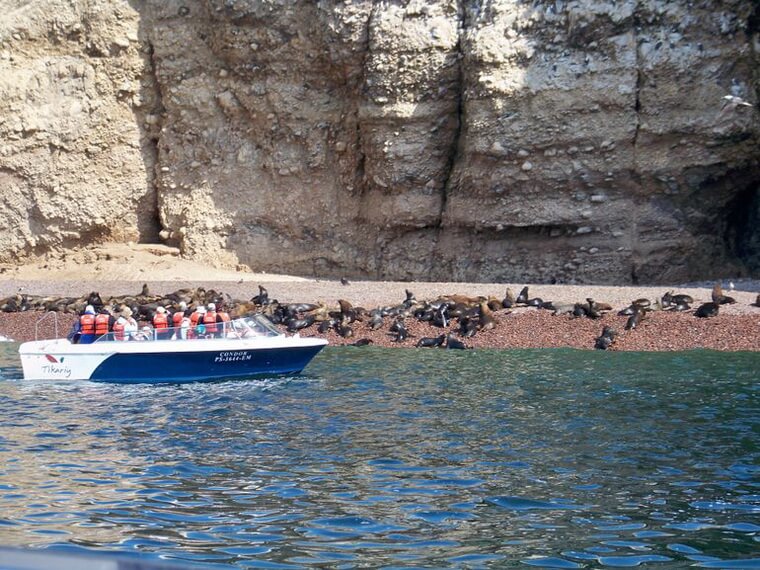 This tour is sometimes called “Poor Man’s Galapagos.” This can be translated roughly as “Galapagos for the Poor Man.” But no offense here, as the tour simply offers to see a kind of scaled-down copy of the Galapagos Islands.

Excursions to the legendary Nazca Plateau

Just two hours south of Huacachina is the famous Nazca Plateau. The same place where ancient people carved giant images in the desert.

You can learn more about the Huacachana tours on this site.

Most importantly, don’t forget to see the sunset in the oasis. Climb the dunes in the evening and enjoy an unforgettable spectacle. 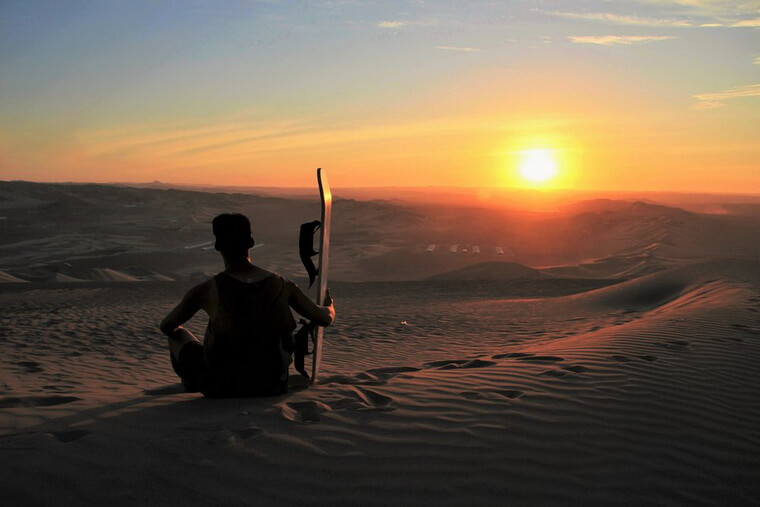 Sunset at the Ouacachina Oasis

How to get to Ouacachina

The bus companies Cruz del Sur, OLTURSA and CIAL offer routes from Lima (the capital of Peru) through the city of Ica. The trip usually takes four and a half hours.

Local bus companies, such as SOYUZ, also offer trips along this route. The advantage of SOYUZ is that you don’t need to buy your bus tickets in advance. You just show up at the station at any time of the day or night, buy a ticket, and you’re on your way in 20 minutes.

When you get to the town of Ica, you should take a cab to Huacachina. It is safer to take a cab directly at the bus station. The fare is about $4 per person. Street cabs usually charge $2 per person, but it’s up to you, since it’s possible to be cheated by such cab drivers.

Peru Hop is the only direct bus service to Huacachina. Buses go to the oasis from Cusco, Lima, as well as from Paracas, Nasca and Arequipa. By the way, if you take advantage of the trip by these buses, you will have the opportunity to save on accommodation in local hotels.

There are several hotels located directly in Huacachina.

Quiet family atmosphere and good food options. Free Wi-Fi. But no pool. Prices from 45 soles per place in an 8-bed room.

A family guest house next to the lagoon. It has high ceilings, trendy decor and a nice atmosphere. There’s a pool, free Wi-Fi, and an Italian restaurant. Prices start from 40 soles per place in an 8-bed room.

Luxury camping with a tropical atmosphere. It is even called an oasis in an oasis. It offers a bar, pool, restaurant, barbecue area. Prices from 70 soles.

At hotels and hostels you can get a discount of 10 to 20% if you use the buses Peru-Hop. Check out Peru-Hop’s official website for hotels and prices.

Huacachina, an oasis in the dunes of Ica, Peru

Huacachina, or Huacachina, is an oasis village in the Ica region of southwestern Peru. There are few locals here, only some small hotels and not many tourists. It is home to about 200 people. Thus, it is a very quiet place and most people not only visit it, but also sandboarding (snowboarding in the sand).

Huacachina is built around a small natural lake in the desert. Called “America’s Oasis,” it serves as a resort for local families from the neighboring town of Archipelago, and more and more as an attraction for tourists attracted by sporting events.

Legend has it that the lagoon was formed when a young princess was kept imprisoned here. She managed to escape, and as she fled, the puddle in which she bathed became a lake. The folds of her mantle flowing behind became the surrounding dunes, and the princess herself still lives in the oasis as a mermaid.

The oasis is depicted on the back of the 50 New Soles banknote.

Nowadays, private landowners have installed wells around the oasis to gain access to water. This had the effect of drastically reducing the water level of the oasis. To compensate for this water loss, and to preserve the oasis as an aesthetically pleasing destination for tourists, the city began artificially filling the oasis with water.