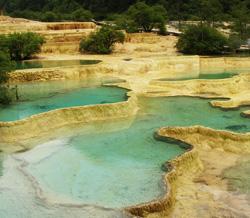 The picturesque Huanglong Valley is an astonishing natural creation that delights and amazes.

The protected area, totaling about 40000 hectares, is located in the northwest of Sichuan Province. The Huanglong Valley has been a UNESCO World Heritage Site since 1992. The main attraction of the valley are the terraces, or as they are called, Huanglong Cascades, shimmering with gold in the sun. In Chinese, Huanglong means “yellow dragon”, the Chinese gave that name because the cascades stretching for several kilometers look like dragon scales. Water flows from one body of water to another, thereby forming cascades. The water flowing down the terraces is clear, but the water contains high concentrations of calcium carbonate. Due to the calcium carbonate, lime shores, painted in a golden color, and algae give the water an emerald, turquoise hue. The amazing landscape has been shaped over many thousands of years.

The most picturesque ponds are deep in the valley, behind the Huanglong Temple. The way goes through forests and takes about 4 hours, so you should count your strength.

Huanglong Valley is beautiful at any time of the year, but in the fall, the valley looks even more fabulous and magical. Throughout the year, the water changes color, the surrounding forests change the color of their foliage, and the valley transforms several times during the year.

It is noteworthy that the Huanglong Valley is hidden in the mountains and surrounded by dense forests, as if nature itself is trying to hide such a picturesque place from prying eyes and protect its creation from destruction. However, millions of tourists visit the protected area every year.

Other attractions in the valley include the luminous waterfall (Feipuliuhui), Xishen Cave, Huanglong Cave with stalactites and Buddha statues, Zhuanhua and Shitazhenhai ponds of five colors, snowy mountain peak.

READ
Volcano Sinabung on the island of Sumatra. Indonesia

The boiling Pearl Lake, which does not freeze even in winter as its waters are heated by hot springs, is of no small interest to tourists. Due to the special composition of water springs have medicinal properties. However, you will not be able to swim in the springs.

Every year, in July, the Haonlun Temple hosts a fair to which locals and people from other provinces gather. 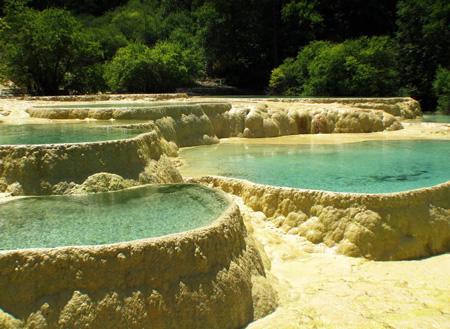 What to Consider When Visiting the Sanctuary

Tourists can only move around the reserve on special wooden platforms and gravel paths, and gazebos have been erected on the shore where you can relax and admire the local scenery. However, because of the endless crowds of tourists, you can hardly relax in peace and quiet, unless you go up to the remote parts of the reserve.

In summer the air temperature warms up to 18-22 degrees Celsius, the rainy season is in July and August. Therefore, the main flow of tourists is observed in autumn (in September and October), when the weather remains clear but cool. The reserve is closed to visitors from December to March. The smallest flow of tourists is observed in the morning hours.

There are no stores and catering facilities on the territory of the reserve, so you should stock up on water and food beforehand.

There are no hotels near the valley, but you can stay in Chuanzhusi, Songpan or Jiuzhaigou, about 40 km west of Huanglong. On the administrative territory of the reserve are two hotels, with very expensive rooms.

Entrance to the reserve is for a fee; during peak season the ticket price, per person, is about 200 yuan, at other times the price is 60 yuan.

How to get to Huanglong Valley

You can get there from Chengdu. First take a bus to Jiuzhaigou Park (about 10 hours of travel time), from there take a sightseeing bus to Huanglong Valley. Keep in mind that buses from Chengdu run several times or once a day (depending on weather conditions), so you should plan your trip in advance by checking the schedule.

Mesmerizing scenery of natural cascades of Huanglong travertine in China

One of the most beautiful Chinese natural attractions is rightly considered to be the Huanglong travertine terrace. It is located in the northwest of Sichuan Province. As part of the Mingshan Mountain Range, the cascading slopes are located at an altitude of 3,400 meters above sea level. The mesmerizing scenery of Huanglong Natural Cascades in China attracts many tourists who come here for unique impressions and photos.

A few things to know about travertines

The most famous in the world travertine rocks are considered formations in the Turkish Pamukkale, which is located near the lake Bande Amir. By its beauty mesmerizing natural landscapes cascades Huanglong in China is not inferior to the aforementioned landmark of Turkey. In fact, travertines are natural formations in the form of mineral pools.

The mineral deposits of Huanglong are shaped like a floating dragon. That is why the natural site was given such a name. Huanglong means “golden dragon” in Chinese.

Interesting facts about the site

According to legend, the reserve got its name after a giant yellow dragon flying over the valley and dropping its golden scales on the ground. It lay in the form of travertine terraces. This legend is confirmed by the views opened from the flight of birds. It is logical that tourists here will not be able to see the mythical reptiles, but the cascades do wriggle and shine like a dragon’s scales.

But these are not all the interesting facts about the attractions that draw the attention of tourists from all over the world to the reserve Huanglong:

Travertine creations of nature attract beautiful scenery. The color of the water, with all shades of blue, ranging from azure to turquoise, also amazes the guests of the protected area.