Humayun’s tomb in India is rightfully considered a unique structure and is a UNESCO heritage site. My greatest pleasure was that everything here is literally steeped in ancient history and it is incredibly impressive! I can’t help but share the historical value of this place, and of course, its photos =) And hope, if you just think whether it is worth to visit the Mausoleum of Humayun in Delhi, after this article this question disappears by itself

Let’s start with who was the Humayun, in honor of whom this work of architecture was built. The Mughal Empire came to India from the north. To be precise, the Mughals are the same Mongols we have known since high school, who once conquered Russia. Not many people know that the Mongols also conquered China and reached India, not to mention the other countries of Central Asia. One of the most famous Mongol warlords was Tamerlane. He lived a century later than his predecessor by the name of Genghis Khan, but nonetheless achieved no less success.

Humayun was Tamerlane’s great-great-grandson. So it was not for nothing that the great-great-great-grandfather conquered Indian lands, the legacy went to his relatives, i.e. to whom it is necessary)) Humayun’s father Babur was the first ruler of the Great Mughal Empire in India. Incidentally, he was born in Uzbekistan, and in Soviet times, Tashkent textbooks called him an Uzbek poet. An oxymoron!!!)

In general, Humayun was not a random Padishah who fell from the sky, but one of imperial blood. This Mughal proved that he belonged to the blue blood not once, fighting for the lands of Northern India and Afghanistan. On occasion, he had to leave Delhi and Agra to surrender and flee to Kabul, and then to hide in Iran. But at the right moment, Humayun won it all back and finally died in Delhi, though in the most ridiculous way – he got entangled in his own hem and flew down the stairs. On this occasion his wife built the famous Humauyn’s Tomb mausoleum. 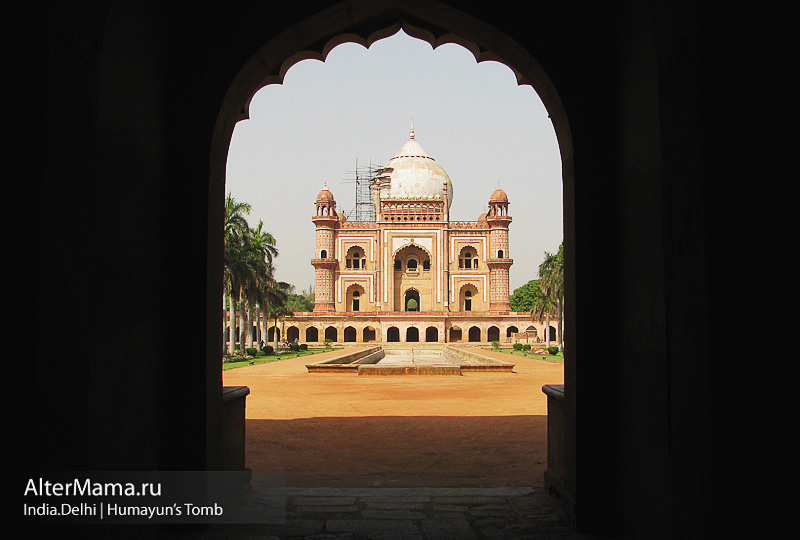 There is exactly the same framing passageway through a small gate in the famous Taj Mahal (* at the link my detailed story about the Taj Mahal with colorful photos). By the way, the coincidence in the architecture is not accidental, because the prototype for the Taj Mahal in Agra was the tomb of Humayun Delhi. Which in turn was built after the example of the famous Gur Emir Mausoleum in Samarkand, which is the tomb of Tamerlane and many heirs of his dynasty. 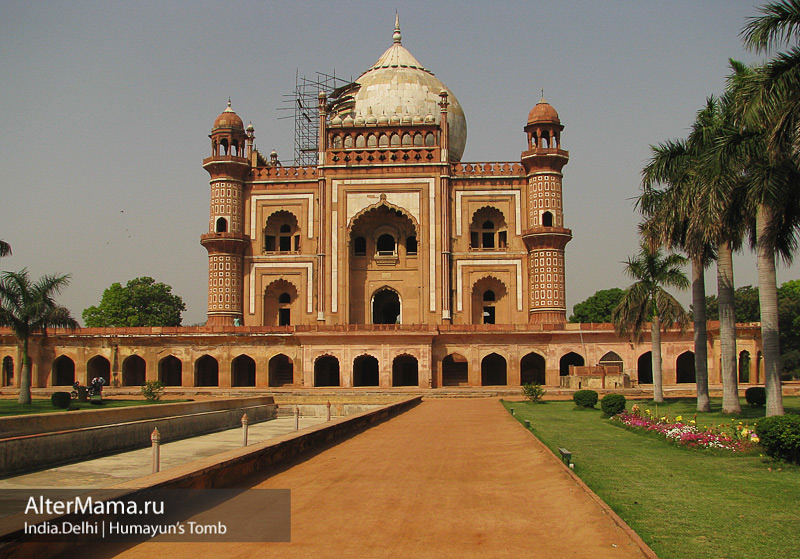 Because of sanctions, Booking.com, Agoda and other foreign sites are gone

Now you have to use only Russian hotel databases to book accommodation. We use service Hotelukwhich searches for rooms in all available hotels around the world, and also helps to find the best price by comparing prices in different booking systems. The benefit sometimes reaches 1-2 thousand rubles per day. Try it for yourself and compare!

From this perspective Humauyn’s Tomb looks a lot like the Jama Masjid Mosque – the central mosque of India. It is exactly the traditional Islamic architecture, which later became the classical style. 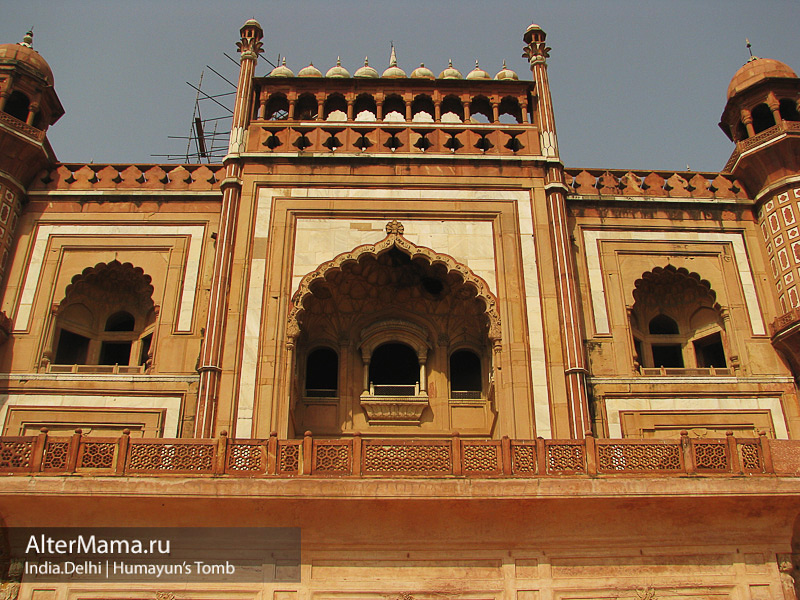 Inside, everything is as modest as possible, as befits a last refuge… 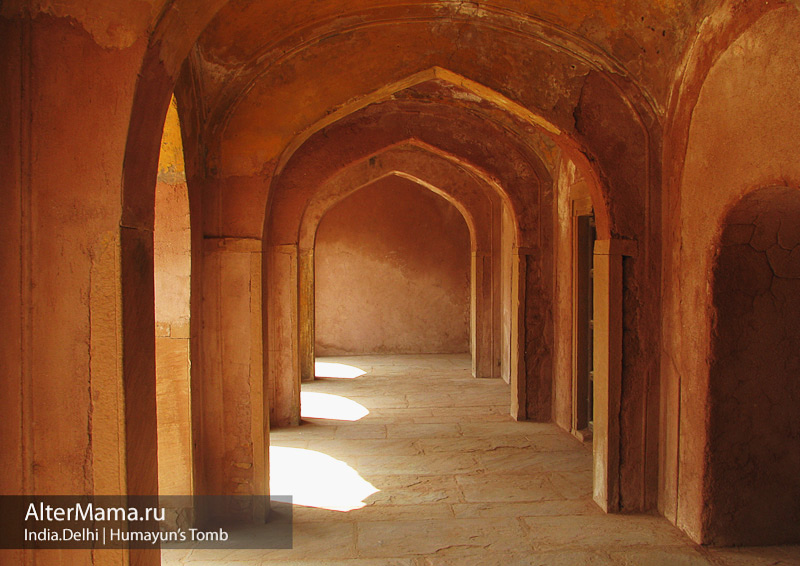 Only a lonely flower is inscribed on the vault… 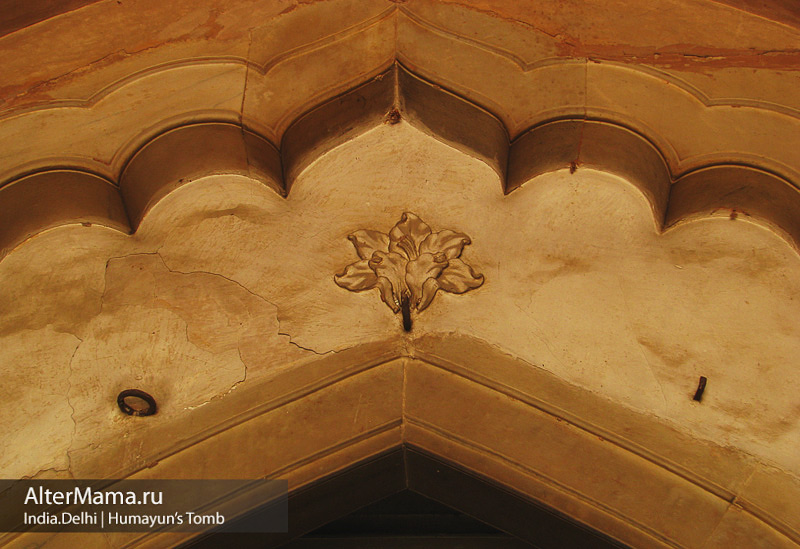 And the patterns on the ceiling in some places. 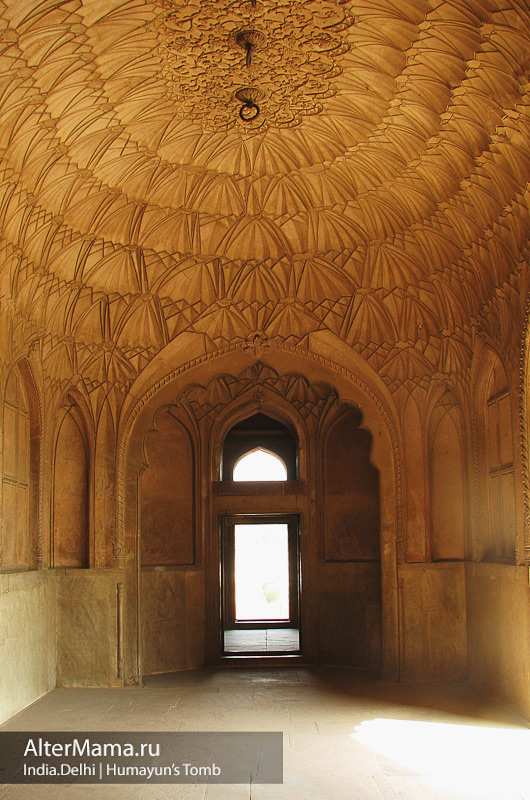 In the very center of this empty structure stands a semblance of a coffin. 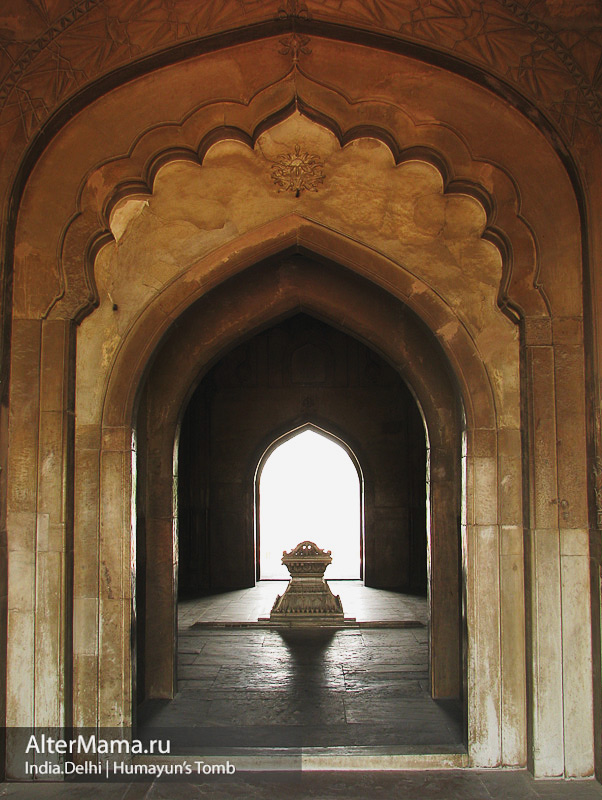 Whether Humayun’s body is under there, or at least his ashes, is unknown. At least I did not find out myself, although it is supposed to be there, as it is a mausoleum. 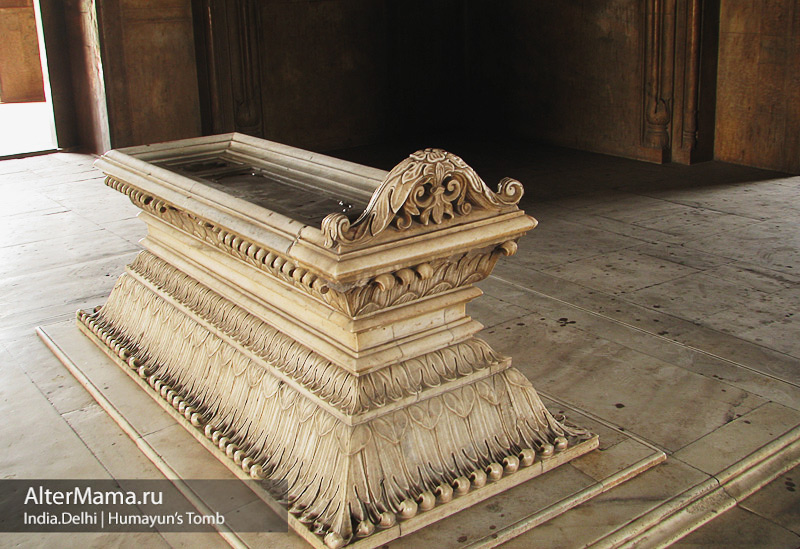 The view from the terrace is mesmerizing. By idea the tomb was supposed to personify Eden – the Garden of Eden, which according to the Koran is fed by four rivers. That is why these elongated ponds with fountains, located on four sides of the garden, symbolize the rivers. It is true that at the time of my visit they were clearly dried up. 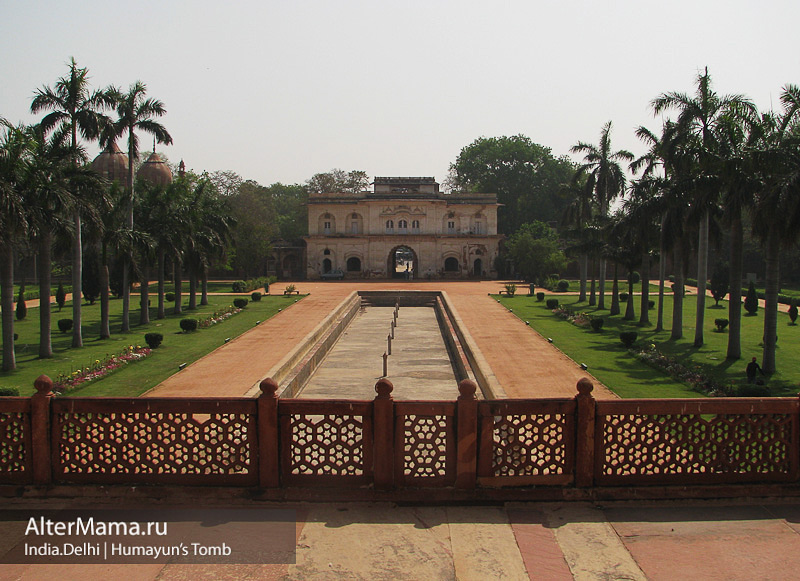 The garden itself is intended to represent Eden. In general, this is what distinguishes this mausoleum from all those built before it – for the first time, a green garden was laid out around the tomb itself. 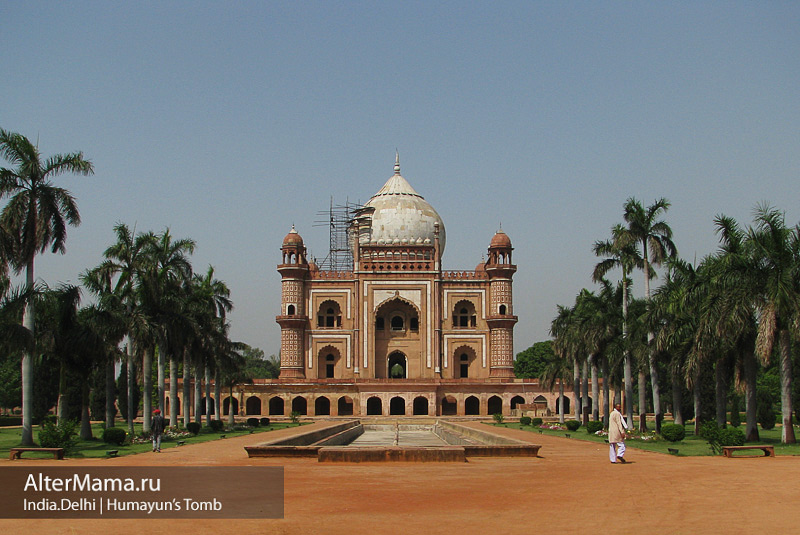 This seemingly simple idea had never occurred to anyone before, and the architects of the time liked it so much that it was used many times later, not only in India but also in other Eastern countries. 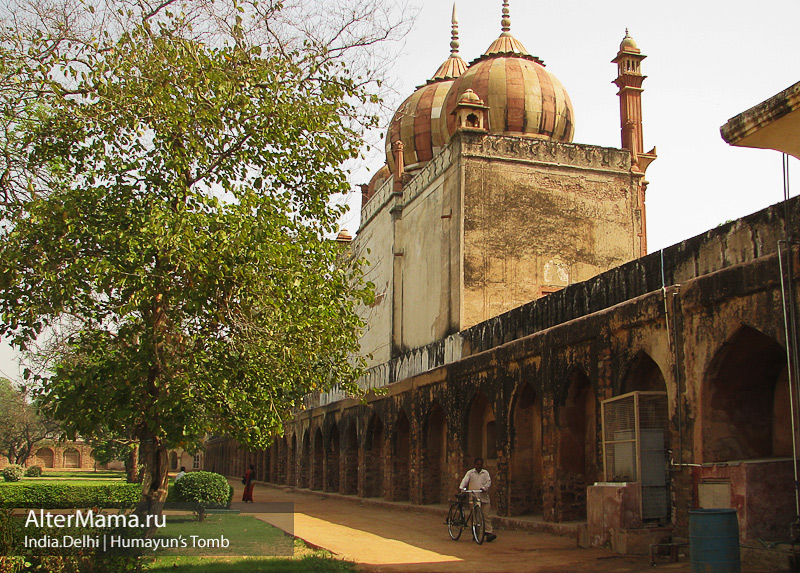 So the area of Humayun’s tomb is very blooming and well-groomed, it is really nice to be here. The museum itself does not make any heavy impression. The building is light in design, rare patterns make it sophisticated. Well and the history is impressive. All the same we heard so much about the Mongol invaders from children’s textbooks, but little trace of it remained in Russia, but in India monuments of the Great Mogul Empire, preserved in all its grandeur and grandeur. As if more than 500 years have not passed since construction of all these famous constructions. I do not know how they managed to keep it all, but definitely impressive.

Humayun Mausoleum is open daily from 6am to 7pm. Entrance for foreigners costs 500 rupees. To be honest, the price is way overpriced, maybe it’s worth it, but even many of the attractions in Jaipur, which in my opinion are much more interesting, the entrance is cheaper. On the map I marked the location of Humauyn’s Tomb.

Location Humayun’s Tomb is very convenient – near Nizamuddin railway station and Delhi Zoo and one of my favorite forts of Purana Qila, where you can easily walk to the Gate of India, and from them to the Indian Parliament itself, that is, you should visit all together, having devoted a whole day to it.

In Delhi there is an attraction on almost every corner. Each of them is interesting and beautiful, but most stands out the tomb of Humayun, located in the east of the city. It is often confused with the Taj Mahal mosque in Agra.

Humayun’s tomb is a historical structure located in Delhi. It was built by order of the wife of Emperor Humayun. In addition to the great ruler, the entire dynasty of the Mughal Empire, as well as their descendants, are buried here. The tomb can be compared to the Taj Mahal in its architecture.

This landmark is a manifestation of the architecture of the Mughal Empire. It is 44 meters in height and is made of red sandstone, with the addition of mosaics of black and white marble. The tomb stands on a foundation seven meters high. From the top you can see the snow-white marble dome, which visually creates a feeling of airiness if you observe it from the old fortress.

The tomb is surrounded by arches with carved windows covered by bars. This is the first building to use gardens as a decoration. All the plant areas together make up a huge park complex, the idea of which was later often used in other historic structures. Inside the monument are the tombs of Humayun and his wife. They are set on some elevation in the heart of the park, surrounded by beautiful water channels. They have not only aesthetic significance, but also contribute to the preservation of the green cover of the entire mausoleum. The structure of the garden is that of green squares divided by water.

History of the Tomb of Humayun

The creators of the huge mausoleum were Mirak Giyatuddin and his son, who took the idea of the Timurid buildings in Samarkand as the basis for the future construction. The complex was built almost a decade, since 1562.

READ
Alcatraz prison, where it is and the mysterious escape

Humayun is known for giving his entire conscious life to the annexation of the entire north of India. He was also the son of Mogul Babur and the father of the famous Akbar.

He was born in 1508, and as soon as he reached the age of 20 he became a full-fledged ruler. After the death of the young man’s father, Raja Bahadur, who owned Gajurat, began to openly oppose the young emperor. In response, Humayun marched on Gajurat and soon annexed it. This happened in the middle of the 16th century.

After his defeat at the battle of Chaus, Humayun has to hide first in Sindh and then in Marwar. It is during this period that the man gives birth to his son Akbar. In 1544, with the help of the Shah of Persia, he recaptures Kabul from his own brother Kamran. Despite the annexation of these territories, Kamran’s children remained direct heirs to all lands. Among other things, they also belonged to the Great Moguls.

There was a belief among Afghans that their native lands would only prosper if one of Kamran’s descendants ruled.

The struggle between the two brothers lasted for many years. During that time, Humayun left Kabul twice. The outcome of the confrontation was decided by the death of Sher Shah, which Humayun skillfully took advantage of. He first annexed Lahore and then Agra, destroying the emperor of Punjab.

Like all the emperors of that era, Humayun was one of the most educated. He loved the exact sciences and everything to do with the celestials, and adored books. The great ruler did not die during battles, but on an ordinary day by a ridiculous accident. He was walking up the stairs from the library and heard a sound calling for namaz. Being a devout man, the man recklessly leaned over, but could not hold on and fell. The fall was not without consequences for Humayun, and he suffered a severe head injury from which he soon died.

The Mongol Empire existed in the territory of present India and Afghanistan. It ruled from the 16th until the end of the 19th century. The empire got its name already under British rule. Before its founding, “Mughals” were the Muslim inhabitants of northern India and Asia. The founder of the dynasty was Babur, who came to these lands from Hindustan. Since then, his descendants and successors began to be called Mughals, and they were called Great Mughals by the travelers who discovered this state in the 17th century.

But the most important founder of the empire can be rightly considered Akbar. He ruled this territory for about 50 years. At that time the emperor put an end to all internecine strife and united all neighboring lands. He made all the rajas his subjects. Sometimes the process was accompanied by violence, but it was done only for the good of the future state.

Akbar was a very intelligent man, engaged in translations from different languages and tolerated other religions and laws. Before his death, Akbar’s life was overshadowed by his son’s attempts to overthrow his father from the throne.

How to get to Humayun’s tomb

Finding the landmark is very easy. Almost to the gate can be reached by public transport: bicycle rickshaws and bikes.

Delhi is the most developed city in India, which is why all transport is comfortable and convenient. Near the mausoleum are many hotels, available to any tourist.

Among other things, Delhi is the main political center in the country. Here is a huge number of monuments of antiquity, left by a variety of peoples. Most of the buildings are under the protection of UNESCO. Also many of the monuments have the title of national historical sites.