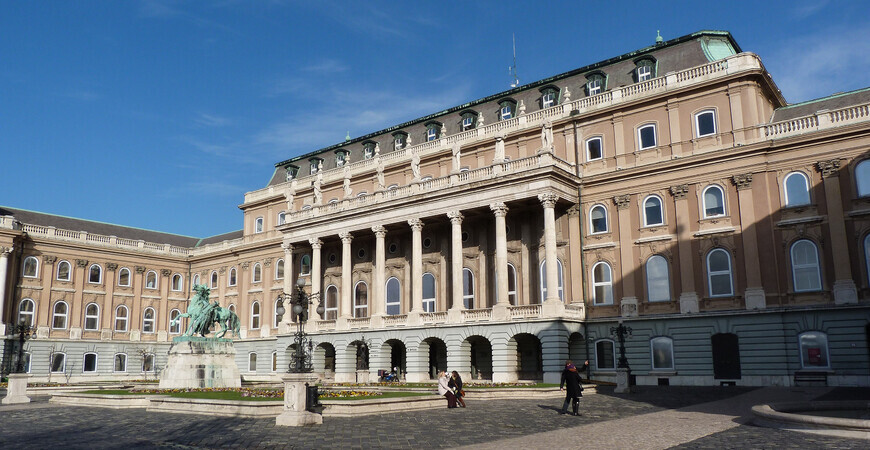 National Gallery – one of the main museums of the Hungarian capital is located in the famous Royal Palace of Buda Castle. Unsophisticated tourist can get confused by the names of museums and galleries of Budapest, which in translation into Russian sound very similar. In addition to the Hungarian National Gallery, there is the Hungarian National Museum, the Museum of Fine Arts, the Historical Museum of Budapest and the Museum of Applied Arts. Budapest, with more than 200 museums, is rightfully considered one of the museum capitals of Europe and the world.

National Gallery of Hungary is an art museum, the collection of which is entirely devoted to the Hungarian art. The museum collection contains works by masters of Hungarian origin and those artists, whose creative destiny is associated with Hungary. The chronological range is from medieval altarpieces to late ⅩⅩ pop art.

The Hungarian National Gallery occupies buildings A, B,C and D of Buda Castle, which is considered one of the outstanding monarchical residences of Europe. The history of the palace begins in the time of Louis Ⅰ (Lajos the Great), who moved the capital from Visegrad to Buda. Over the following centuries, the building was repeatedly destroyed and restored, rebuilt and reinvented. The architectural foundations of the palace were laid during the reign of Maria Theresa in the ⅩⅧ century. The palace experienced its greatest loss and destruction during World War II and the barbaric rebuilding of the palace under communist rule. The palace is now gradually returning to its historical appearance.

The National Gallery was born in the depths of the Museum of Fine Arts, the largest collection of art in Budapest. In the 1920s the Hungarian collection grew enormously, and needed more space to exhibit its works. The National Gallery became an independent museum in 1957 and moved to the Buda Palace in 1975. It now houses 110,000 works, has a permanent exhibition and holds regular thematic exhibitions.

The earliest works of Gothic art ⅩⅣ-ⅩⅤ centuries are on the first floor. These are wooden sculptures of biblical characters and saints, traditional for the Catholic Church, three-piece wooden altars (triptychs) and icons. The ⅩⅥ century collection of altarpiece is considered the largest in Europe. Works on their study and restoration are being carried out in the museum.

The first floor also houses the ⅪⅩ century collection. This period is considered the birthplace of Hungarian national art. During these years the first museums and exhibitions appeared in the country, an art academy was opened, art prizes were established, and a national criticism and press were formed. The section presents the works of Miklós Ijo, portrait painter Miklós Barabás, painter Pal Sinjei-Mershe, sculptor István Ferenci, and other outstanding Hungarian masters.

The gallery has a large collection of sculpture from the turn of the ⅩⅩ century. Auguste Rodin had a great influence on the creation of Hungarian sculptors. In the museum, you can see more than one work influenced by the great French artist.

A large part of the exhibition is devoted to painting. One of the main sections are works in the genre of realism that gained popularity in the second half of the ⅪⅩ century. The paintings depict realistic scenes of urban and rural life in Hungary, portraits and scenes from everyday life. Paintings by Mihály Munkácsi, László Paal, Adolf Fényes, Jozsef Kosta and others can be seen here.

Between the turn of the century and the end of the Second World War, when Symbolism, Art Nouveau and the avant-garde flourished in world art, the gallery presented 150 paintings and 30 sculptures. One can get acquainted with the works of Bela Czobel, Bertalan Pur, Jozsef Nemes, Bela Witz, Shandor Bortnani and many others. Bauhaus style furniture and ceramics are also on display.

The collection of contemporary art created after 1945 consists of more than 11,000 pieces. Works by artists reflect creative pursuits in a variety of directions, from realism to abstractionism. This part of the exhibition is located in the upper floors of the museum. On the official website of the National Gallery of Hungary you can take a virtual walk through the halls of the museum.

Ticket prices at the National Gallery of Hungary

The museum is open every day except Monday from 10:00 to 18:00. Only temporary exhibitions are open on Wednesdays. Box office and admission to the exhibition stops at 5:00 p.m.

A full ticket costs 3,400 forints. Groups of 15 people or more can buy tickets to the main exhibition with a 50% discount and exhibitions with a 55% discount. This requires pre-registration for the group on the website or by phone. Budapest Tourist Card holders can visit the gallery one time for free. This benefit does not apply to temporary exhibitions.

Tickets can be purchased not only at the museum box office, it is possible to pay through a mobile app, specialized online store or city ticket offices Eventim.

Panorama: The National Gallery of Hungary is located in the Royal Palace

The National Gallery in the Royal Palace is located on a high hill above the Danube on the Buda side.

You can get to the top of the hill to the museum by taking the famous Schiklo funicular. It starts at 10.00 am and takes passengers until 17.00-22.00 hours. The cost of the ride on the historic elevator is 1400 forints. You can take streetcar number 19, 41 or bus number 16, 16c, 105, 916 to the stop “Clark Adam ter” to the lower station of the funicular railway. The same bus routes can be taken to the gallery from above, from the Buda side and get off at the Disz ter square, near the Houdini Museum. The schedule of routes and traffic patterns can be seen on the city website.

From anywhere in the city you can also take a cab. Taxis are metered. Popular services are Főtaxi, Budapest Taxi, 6×6 Taxi.

The Hungarian National Gallery opened in 1957 in Budapest, the capital of Hungary. This museum absorbed thousands of works of various artists. It contains a part of the collection, which was previously located in the Museum of Fine Arts, and there are also paintings that were previously stored in other galleries of the city.

READ
Museum - Underground Typography in Moscow, the history of the revolution

In addition to the permanent collection, the Hungarian National Gallery often hosts temporary exhibitions. To find out what exhibition is currently on display at the museum, visit the official website.

How to get to the Hungarian National Gallery

Getting to the Hungarian National Gallery is easy with buses numbered 16 and 916. Both of these routes take passengers directly to the Buda Fortress grounds.

In addition, the National Gallery can be reached by metro. Get off at the station Deli palyaudvar or Ferenciek tere. The fee will be 250Ft.

Hungarian National Gallery is located on a hill and it is reached within three minutes by the Šiklo cable car.

Exhibition of the Hungarian National Gallery

In total, the collection of the Hungarian National Gallery contains about 100 thousand great works of art, each of which was made by famous sculptors and artists all over Hungary.

Immediately upon entering, visitors to the permanent exhibition will see large canvases on which important events for Hungary are painted. There is also a huge variety of sculptures in wood, made in the Gothic style, and sculptures from the Middle Ages. In addition, temporary exhibitions are often held on the ground floor.

The first floor will appeal to those who are interested in Gothic triptychs, of which there are a large number. One of the most famous paintings in this style is The Annunciation, which was painted in 1506. In addition there are the paintings, made by Austrian Baroque masters in XVII century, as well as works of Hungarian painters of XIX century.

READ
Diorama of the Fiery Arc in Belgorod, photo and description

On the second floor of the National Hungarian Gallery, there is a huge collection of paintings from the 20th century, as well as many intricately carved statues.

You can find works by József Ripple-Ronai, Tivadar Kostka Csontvary and many other great artists.

Cost of admission ticket to the Hungarian National Gallery

The cost of an admission ticket to visit the museum’s permanent exhibition is 1,800 HUF. There you can also take an audio guide in English for 800 HUF. Most of the exhibits are also available in Italian, French and German. Photo and video permits are 1,500 HUF and are only valid for the permanent exhibition of the Hungarian National Gallery.

We have a special page with prices for basic products and services in Budapest!

The Hungarian National Gallery has professional tour guides. In addition to guides who speak English, French and Italian there are Russian speaking guides. The cost of such tour if it includes 15 people or less is 10000 HUF, if the number of participants is 12500 HUF.

The maximum number of people can be from 30 to 40, depending on the room.

It is possible to pay for tickets and additional services of the gallery not only in cash but also by card. Foreign bills are not accepted for purchase.

National Gallery of Hungary is open to visitors Tuesday through Sunday, 10 a.m. to 6 p.m. The ticket office is open from 10 to 17 hours. The gallery halls open at 10 o’clock and close at 17.30, starting from the upper floors of the museum.

In addition, the Hungarian National Gallery has a souvenir store. Its opening hours are 10.00-17.45.

On Monday the museum is closed.

The Gallery Café is also open Tuesday through Sunday from 10 am to 17.45 pm. You do not need a ticket to enter.

The Hungarian National Gallery is a place worth visiting for anyone interested in art. Not only is this museum filled with stunning statues and paintings, but it also has memorable architecture.