Huskar – the village of Smurfs in Spain

The village of Júcar is located 115 km from the city of Malaga and 25 km from Ronda in the autonomous province of Andalusia in Spain.

Juscar was once like many other villages scattered throughout southern Spain. You can find these kinds of villages with rather charming white houses all over the region of Andalusia.

Since the spring of 2011, however, the village has been transformed and has taken on an unusual blue hue. 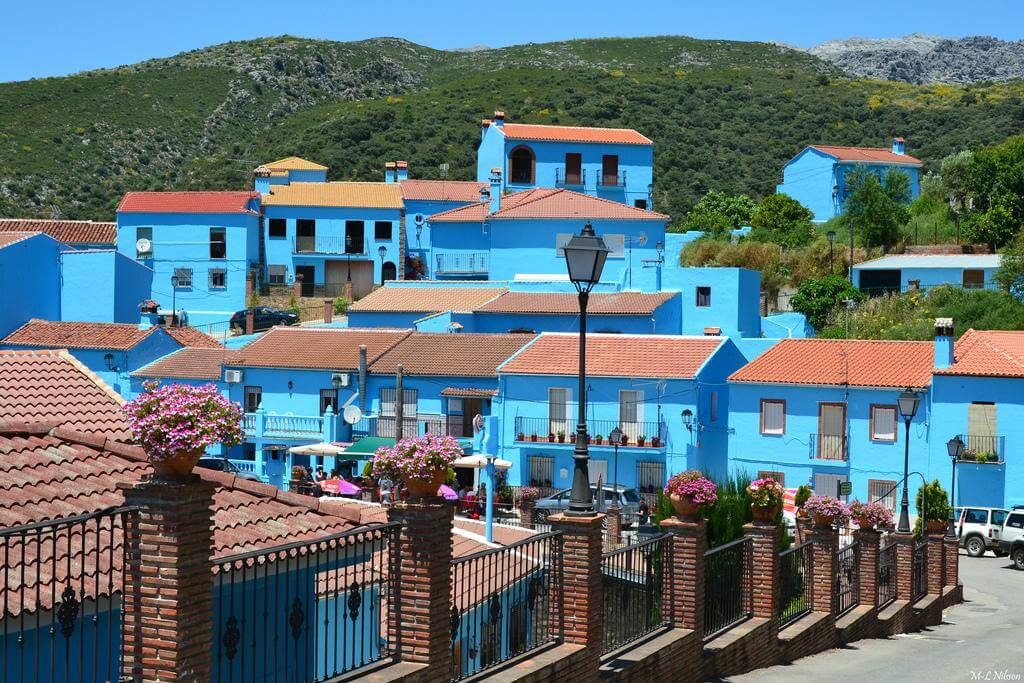 Originally, all the houses were white.

Why did the village turn blue?

It’s simple. It was the company Sony Pictures decided to paint all the buildings in the village blue. Even the local church was painted blue.

They did this in honor of the launch of a new Smurfs movie. As you remember, the famous animated comedy is based on Belgian comic books about funny blue creatures.

You should know these funny guys.

An interesting fact – the village of Huskar was not chosen by chance. There are a lot of mushrooms in its vicinity. And you, of course, know that the Smurfs have a great penchant for mushrooms.

To turn the classic white pueblo blanco houses into smurf-like blue dwellings, 4,000 liters of paint were used. It was undoubtedly an ambitious publicity stunt that certainly drew interest in the film. 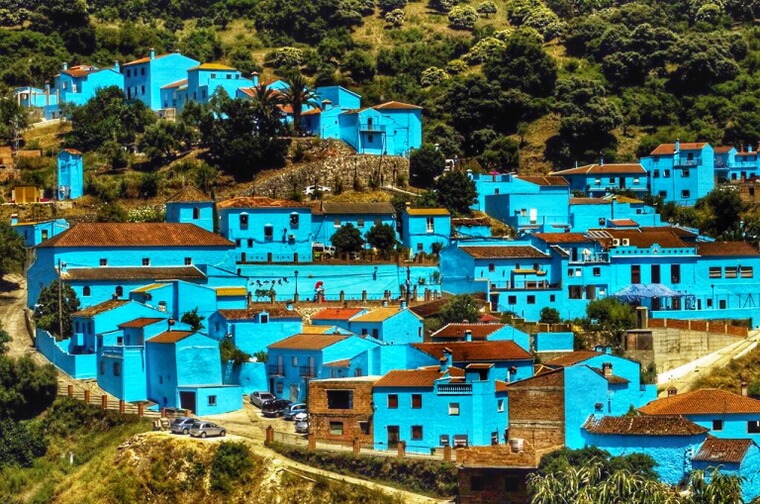 As you can see, the color is very smurfy.

An interesting fact is that at the time of the advertising campaign, Huskar was considered the first and only official Smurf village.

Remarkably, this village did not have to be built from scratch like the famous Hobbiton (Hobbit Village).

The original plan was to remove the blue paint as soon as the movie’s promotional campaign was over. But something went wrong.

The locals practically stood up for their village and its new blue. They organized a referendum at their (now blue) village hall to determine whether the village should remain painted blue or return to its traditional white.

Despite the fact that just over 220 people live here, it was the new look of Huskar that received an overwhelming majority of votes. 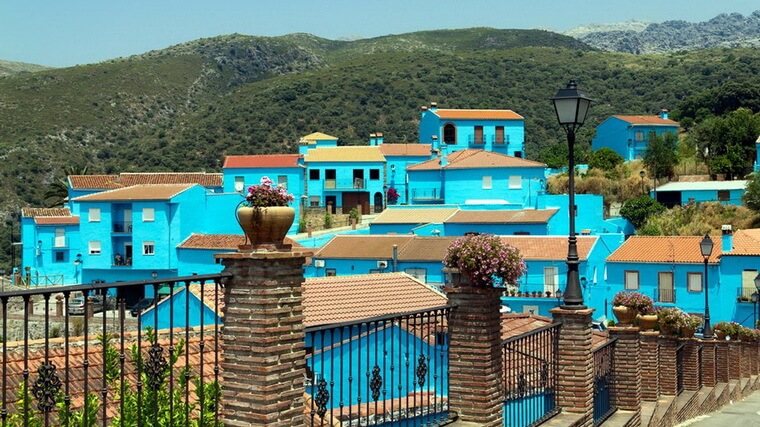 The main reason for this decision was that Huskar was experiencing a significant increase in tourism at this time. The number of travelers went from 9,000 a year to 95,000 in just six months. The effect was so significant that new cafes and guest houses even opened in the tiny village.

Of course, Huskar became known as “Smurf Village.” But such a transformation was not without controversy.

The owners of the trademark “Smurfs” demanded that the villagers pay them 12% of any income associated with the Smurfs. 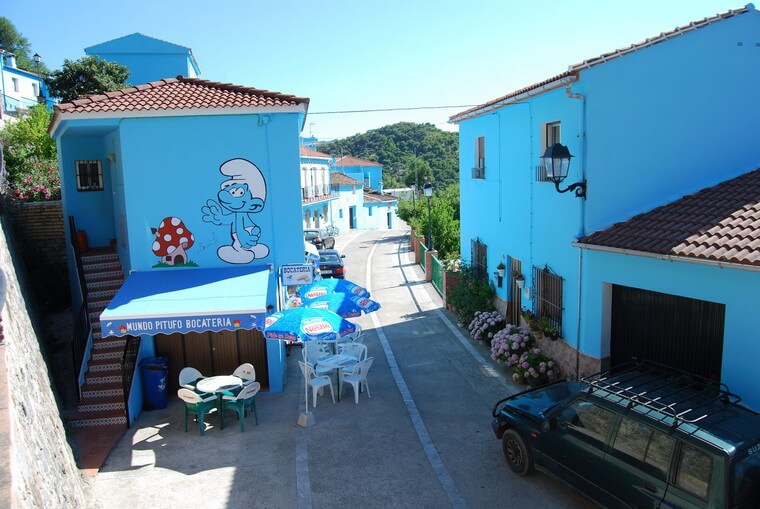 In theory, the Smurfs should have been paid for the use of Smurf drawings.

To get around this, Huskar is now called “Blue Village” (Pueblo Pitufo) rather than “Smurf Village”.

Consider Purple Island in South Korea. Not only are the houses there painted purple, but so are the roads.

I must say that some of the buildings are still decorated with drawings with the Smurfs theme. 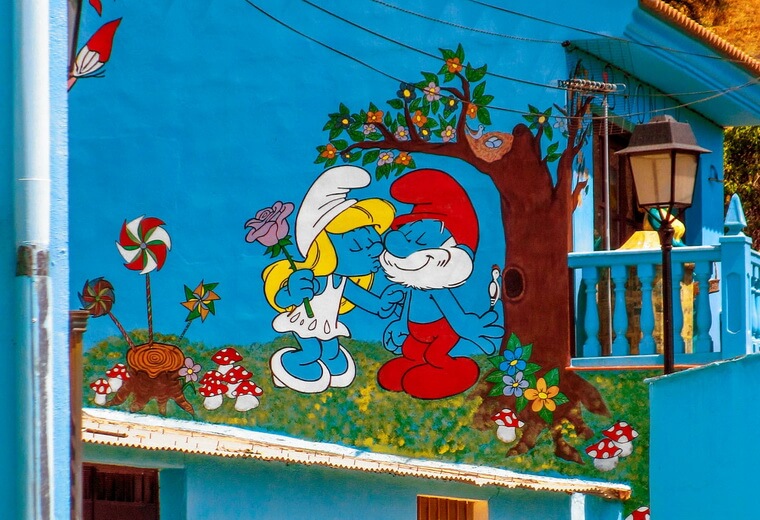 There are many such drawings here.

Tourists can still see a 2-meter plastic Smurf in the village. Of course, it is very popular.

Papa Smurf is the chief of all Smurfs. Gargamel and Azrael the cat are hapless villains who are constantly plotting something against the Smurfs.

Despite everything, Huskar retains all the charm of a classic (albeit blue) Andalusian village. The quiet, secluded location will give you a taste of “real Spain.”

There are many hiking trails in the surrounding area. Whether you choose a day trip to Huscar, or spend more time there, you’ll remember the whimsical splash of blue in the lush green of the Andalusian hills for a long time. 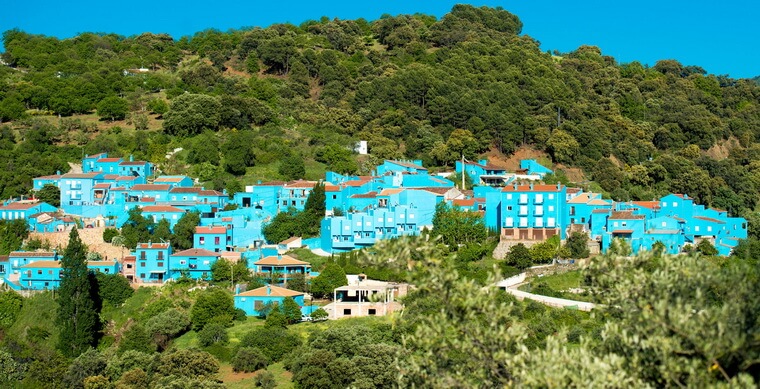 It’s an interesting combination of colors.

READ
Tunnel of Love and a steam locomotive as a dowry. Ukraine

Huscar: where the tale lives 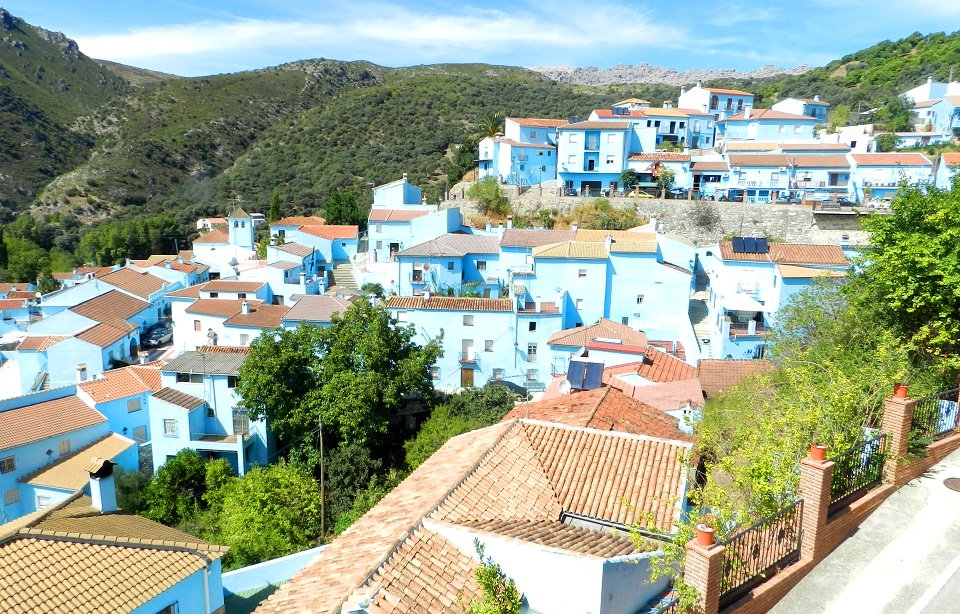 In a faraway kingdom, under the golden-golden sky, in the midst of green-green foliage, there lived a blue-blue town with blue houses, churches and dwarves. The city’s name was Smurfillandia. And it’s not a fairy tale, or even a metaphor. This is a reality, which reigned in a Spanish village four years ago and continues to delight the eyes of tourists to this day.

Previously, this small Andalusian town was known only because it was here, in the first half of the 18th century, by order of King Felipe V that the first Spanish tinworks were opened. Remarkably, in those days, instead of the well-known donkeys and mules, exotic camels were used to transport weights, which were better able to cope with the roughness of the local landscape.

With the advent of “civilization” the curiosity remained in the past, and Huskar continued to live its modest and little known life. Until the picturesque village has not laid eyes in the popular American film company “Sony Pictures”, which has chosen Huskar as a place of presentation of his feature film “Smurfs” in 2011. 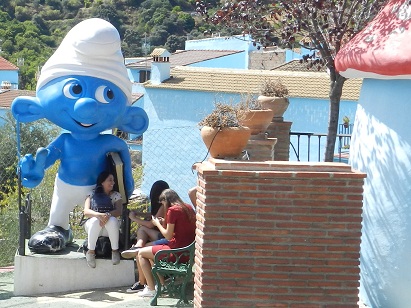 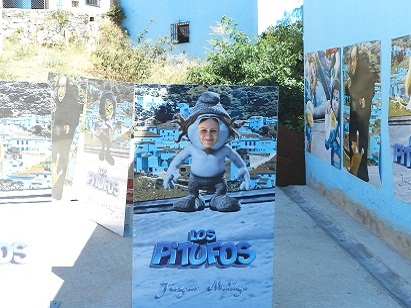 So, on the slopes of the modest municipality of Valle del Henal in the heart of the Serranía de Ronda (Malaga) and landed the mischievous Smurfs, without which today the village can not imagine even the most convinced patriots.

With a light hand of American maestros filmmakers Huskar officially became the world’s first smurfy-town. Decisively and, as it turned out later, irrevocably.

Recall that originally all 175 snow-white houses (including the town hall, an old 16th-century church, a school, and even a cemetery) were painted blue only for a while. After their massive promotional campaign, Sony Pictures was intent on putting everything back “back to normal.” However, Huskar and its residents clearly liked his new smurfy image, and the mayor’s office released the company from the need to return the walls of the city white color.

And no wonder: if just five years ago no tourist set foot in Huskar, today Smurfilandia is a truly unstoppable trail. In just the first two years of Smurf life the town, which before that lived just over 200 people, was visited by more than 215 thousand travelers.

Never have 9,000 kilograms of blue paint been so profitable,” the local wit jokes. 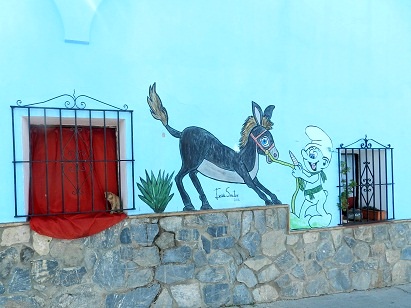 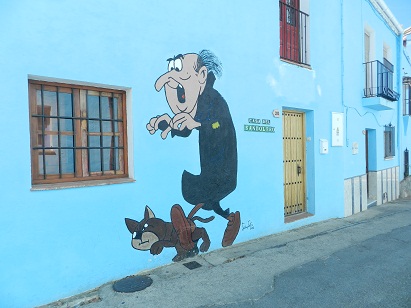 It didn’t take long for the special smurfy hotels, bars, and stores to take off. One of the most striking displays of the Smurf boom was the opening of the Bandolero themed hotel, which today regularly receives travelers from Germany, France, Kuwait, China, Japan, and Russia. It is said that in the first few months of operation, the owner even dyed his hair blue to look more like the famous cartoon gnomes.

However, you can feel like a smurf and not resorting to such radical changes of appearance, but simply by trying on one of the traditional cardboard “sculptures. 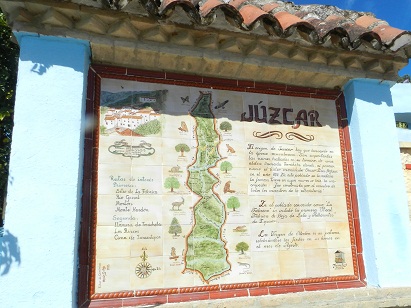 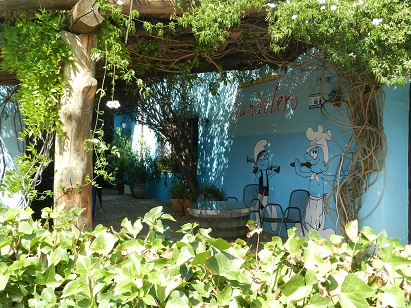 In addition, every weekend in Huskar there is a Smurf show (from 16:00 to 17:00), and if you’re lucky, you can catch a real Smurf market with authentic local products and alpargatas and gourds from Don Quixote’s time.

And in Casa de Pitufina there is a children’s cultural and leisure center, where the youngest Smurfs fans will be offered to make various creative handicrafts, as well as frolic in the toy library.

Of the non-standard entertainment Husscar, which managed to survive against the mass smurf transformation, it is impossible not to note the most interesting sightseeing tours, during which the guides will lead you to the most important historical places of the neighborhood. 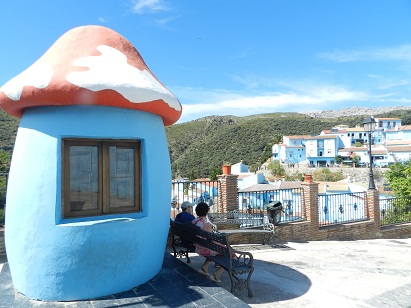 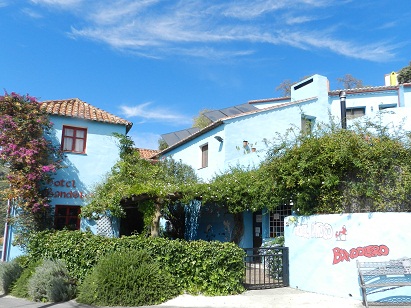 For example, the most popular route here is a half-hour walk among the ruins of old flour mills and a visit to the original Arab bridge over the river Sua. And avid naturalists will undoubtedly enjoy the chestnut grove of Henal, fringed by the majestic and openwork Los Riscos cliffs.

What’s nice, you won’t have to go far to find entertainment: the tourist information office (Oficina de Turismo) will meet you at the entrance to the blue town.

The most popular local hotel is the Hotel Bandolero (tel. 952 183 660, hotelbandolero.com), whose main pluses are the pool and the possibility to stay with pets. Address: Avenida Havaral, 43

There are not many places to eat in the town. To be more precise, there are three.

The tavern “El Casar ón” (tel. 952183515, elcasaron.com) places special emphasis on authentic products. The restaurant also has its own souvenir shop so that no one is left without their smurf, be it a soft toy, keychain or backpack.

The restaurant “La Bodega del Bandolero” (tel. 952 183 660) is located in the building of the Hotel Bandolero and is known not only for its somewhat inflated prices (compared to other bars in the town), but also for its typical provincial slowness of service. But only here you can try a real smurf cake for dessert (€3.85) and, on a hot day, be admitted to a cool terrace under the shade of lush local vegetation.

Service Center for Life and Business “Spain in Russian” is your guide in the world of individual tourism. Organization of tours, itineraries, trips, tickets for various events, excursions with the best guides, organization of holidays. Services for discerning customers.