Hvitserkur – stone monster of Iceland, which from afar seems to be a living creature

Hvitserkur is a huge rock of basalt, which is located on the northwest coast of amazing Iceland. In general, this country is rich in unusual and unique attractions, one of them was Hvitserkur. 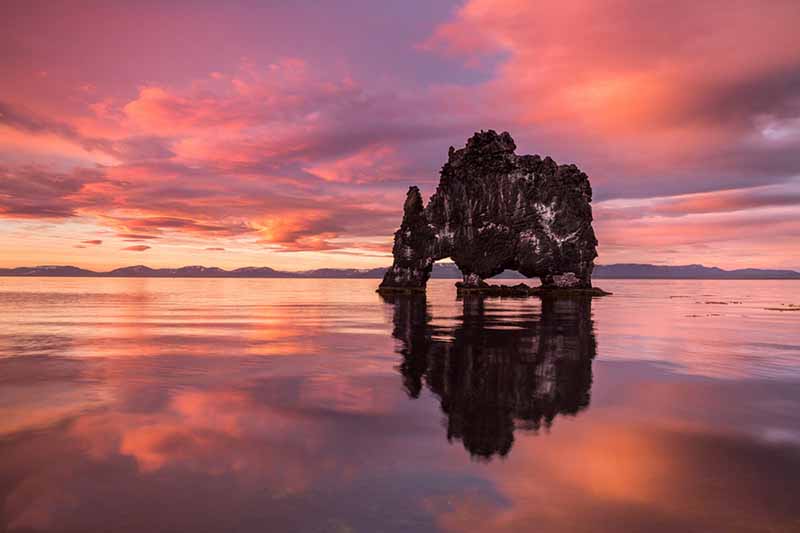 The beauty of the rock.

The rock rises above the surface of the water as much as 15 meters and about the same distance to the nearest shore. Several hundred years ago this rock was a volcano of the same name, but the raging waves of the Atlantic Ocean destroyed most of its crater and only this basalt rock remained.

Hvitserkur in Russian means “white shirt”, this name was given to the rock because of the permanent thick layer of cormorant droppings on its surface. 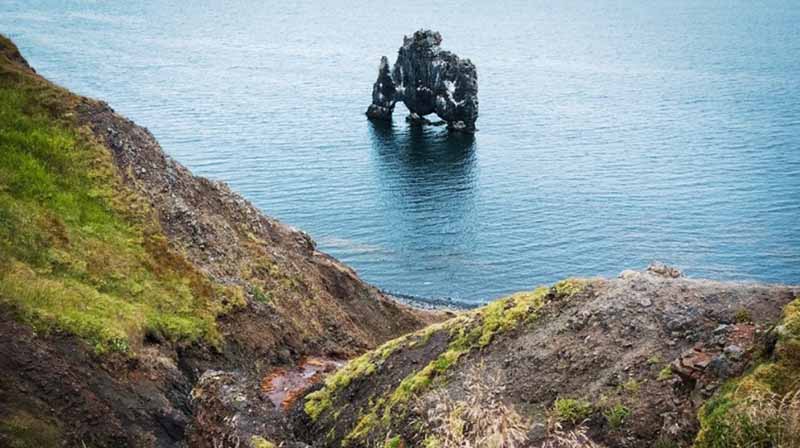 To look at this former volcano, it is enough to walk up to the shore of the ocean. At low tide, those who want to get close to the cliff almost dry sand.

But the fact that this rock has not succumbed to destruction is a credit to the Icelanders, because they have strengthened its base with a thick layer of concrete. When the residents of the area began to notice that the lower part of the landmark began to crumble from the constant impact of waves, they began to put cement on the base of the rock at low tide. Of course, it looks a bit unaesthetic, but it increases the life time of Hvitserkur.

Despite its majesty, from the shore it looks like a huge dog or boar. This is especially pronounced at sunset, when the low rays of the sun, create additional shadows. Some have noted that the volcanic rock looks more like a monster that drinks water from the ocean. Due to the two through holes in the base of the rock, it creates the image of two powerful paws of some creature.

Iceland – a country of incredibly beautiful northern lights, and this phenomenon even more decorates the rock Hvitserkur with many different shades.

Local legends of the rock

The locals of the northwest coast of Iceland could not leave this landmark without a myth. For example, one legend says that Hvitserkur Rock is a frozen troll that didn’t have time to hide before the sun came up.

In 1990, images of Hvitserkur Rock appeared on Icelandic postage stamps.

Also a favorite attraction near this landmark is seal-watching. This is where the largest colony of these animals in Iceland lives.

Right near the shore, you can see the beautiful golden-blue fish that have ended up there because of the waves and tides. Also, the northwestern part of Iceland is known to be home to a large number of seabirds.

The quickest way to get to enjoy the views at Hvitserkur is to rent a car. But to do so, you must be sure to have a navigator with you and a pre-booked spot for your overnight stay. The road is quite challenging and bumpy, but driving along the coastal strip of Iceland will give your tourists as much admiration as its end point. 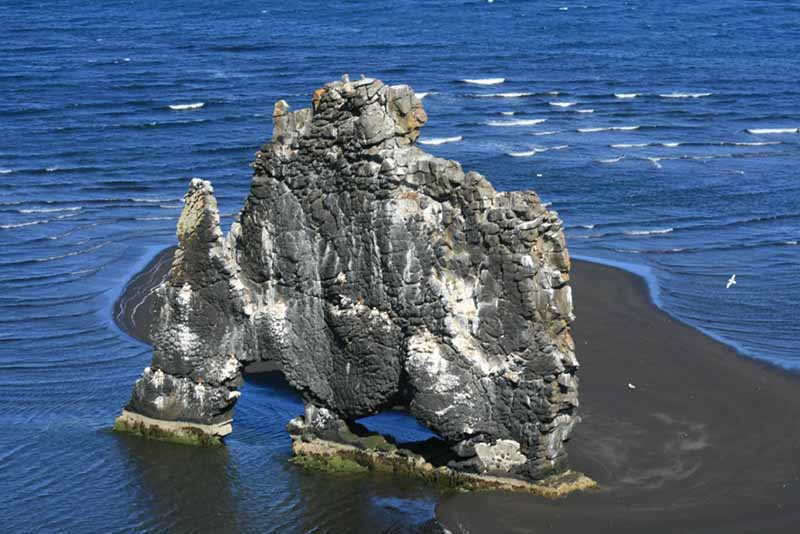 The nicest and warmest month in this country is July, and the wettest and coolest is March. But to visit exactly Hvitserkur the most favorable month will be May, as during this time it is very sunny, warm and photogenic.

If you want to catch the most beautiful northern lights, you should plan your trip for September or mid-April. 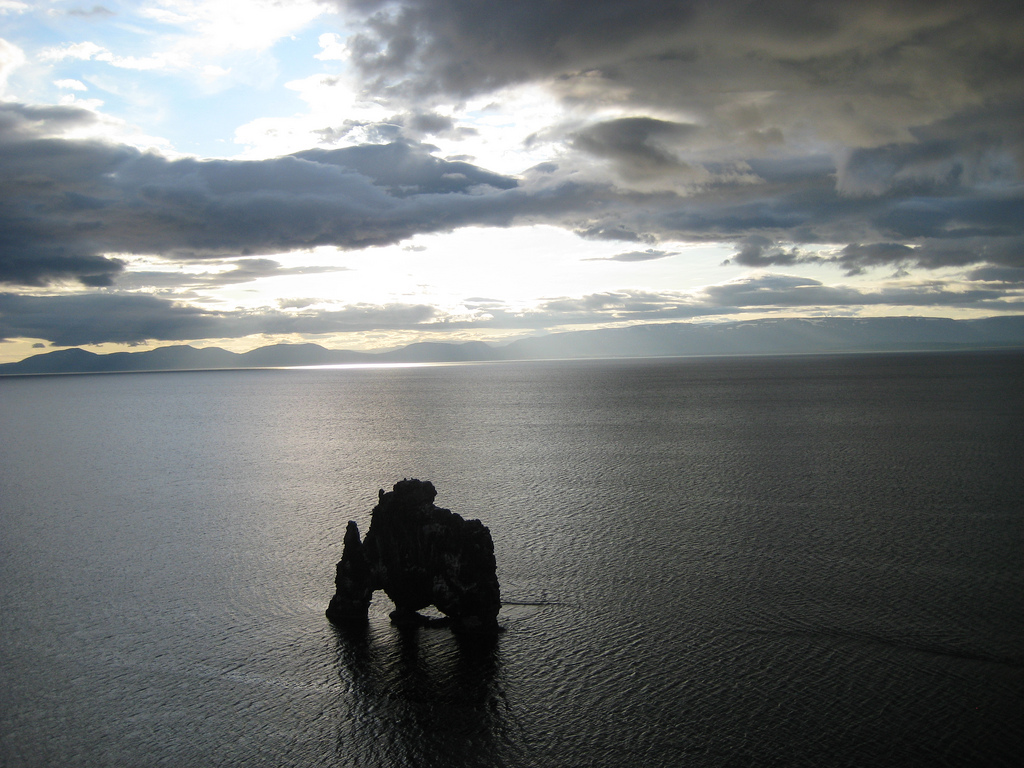 In fact, the 15-meter-high Hvitserkur is all that remains of the volcano of the same name.

The name of the rock translates as “white shirt”. On the rocks you can really see a few large spills of white, but it has nothing to do with any anomalous or geological features, but only with birds, or rather the products of their vital activity. 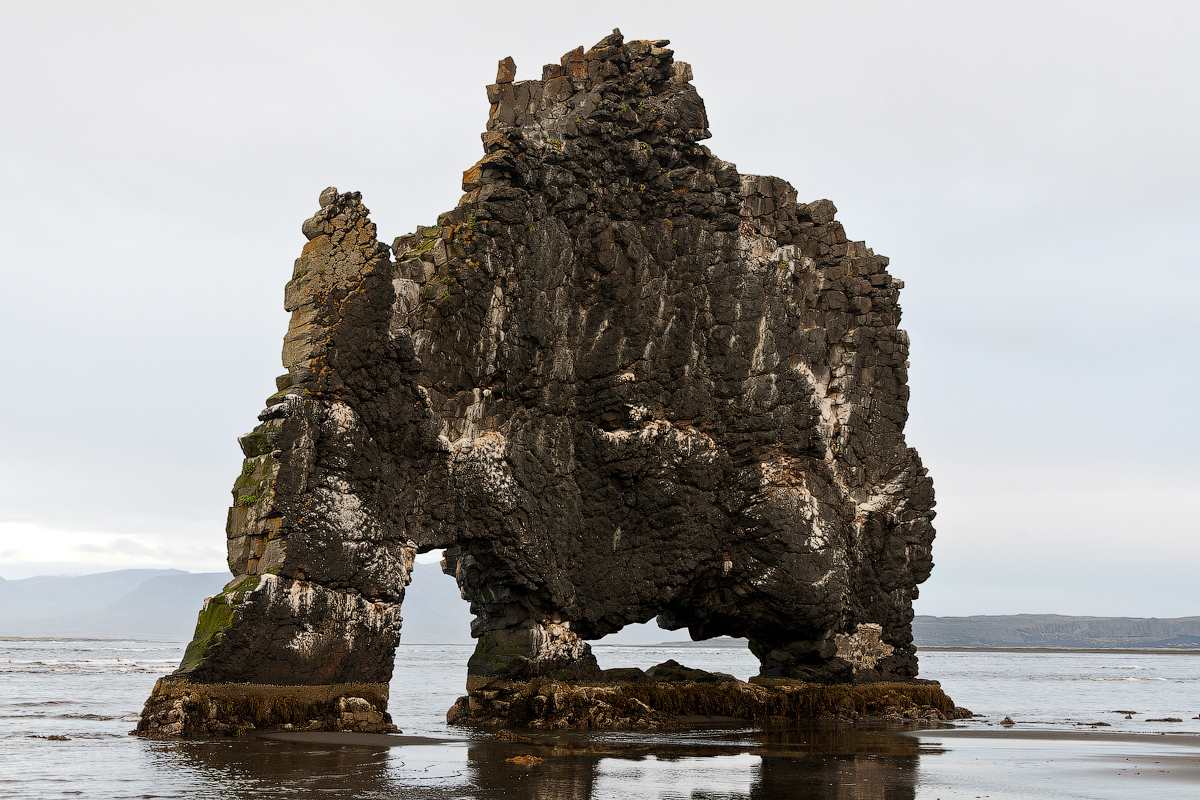 You can admire the majestic Hvitserkur from the shore, and when the tide recedes, tourists have the opportunity to get close to the rock, almost without getting their feet wet.

Locals have noticed that the water is gradually eroding the base of the rock and began to cover Hvitserkur with cement. Of course, this spoils the view, but it prolongs the life of the local landmark. 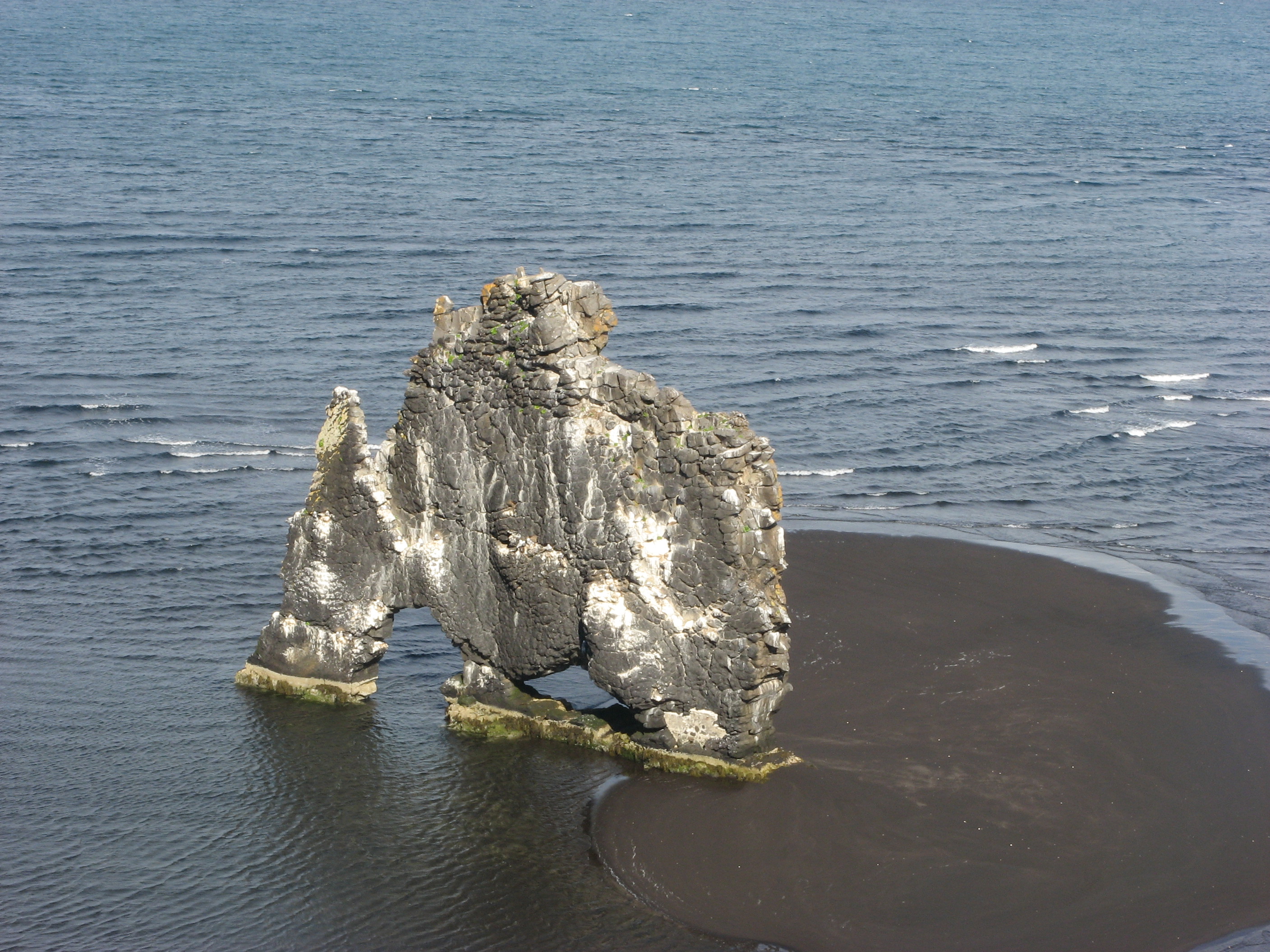 The pointed rock itself is relatively small – it reaches 15 meters in height, but it is this small size that allows you to confuse it with a huge dog, wild boar or something similar and not less unnatural from the shore. 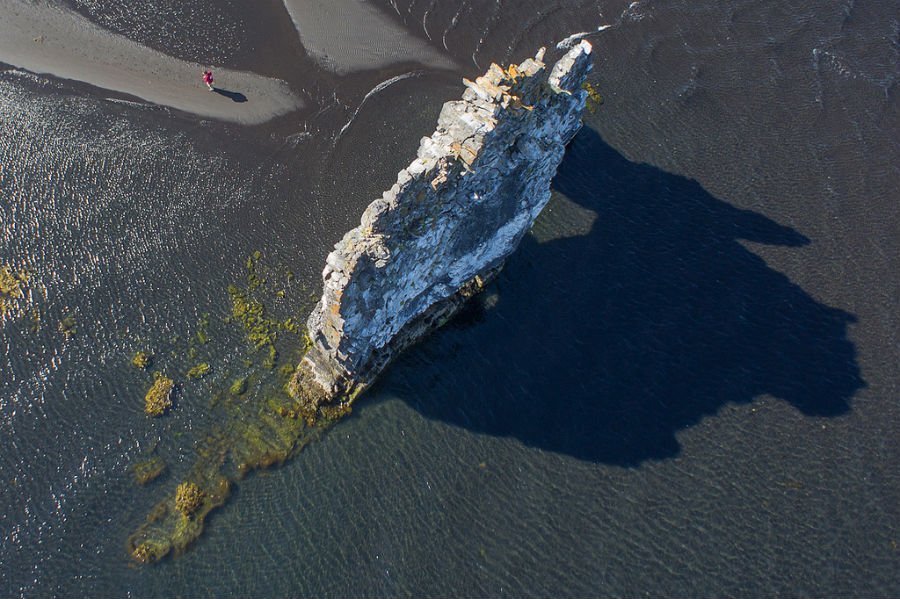 Since the rock is located in Iceland, here you can observe the beautiful effect of northern lights, which also gives it interesting colors 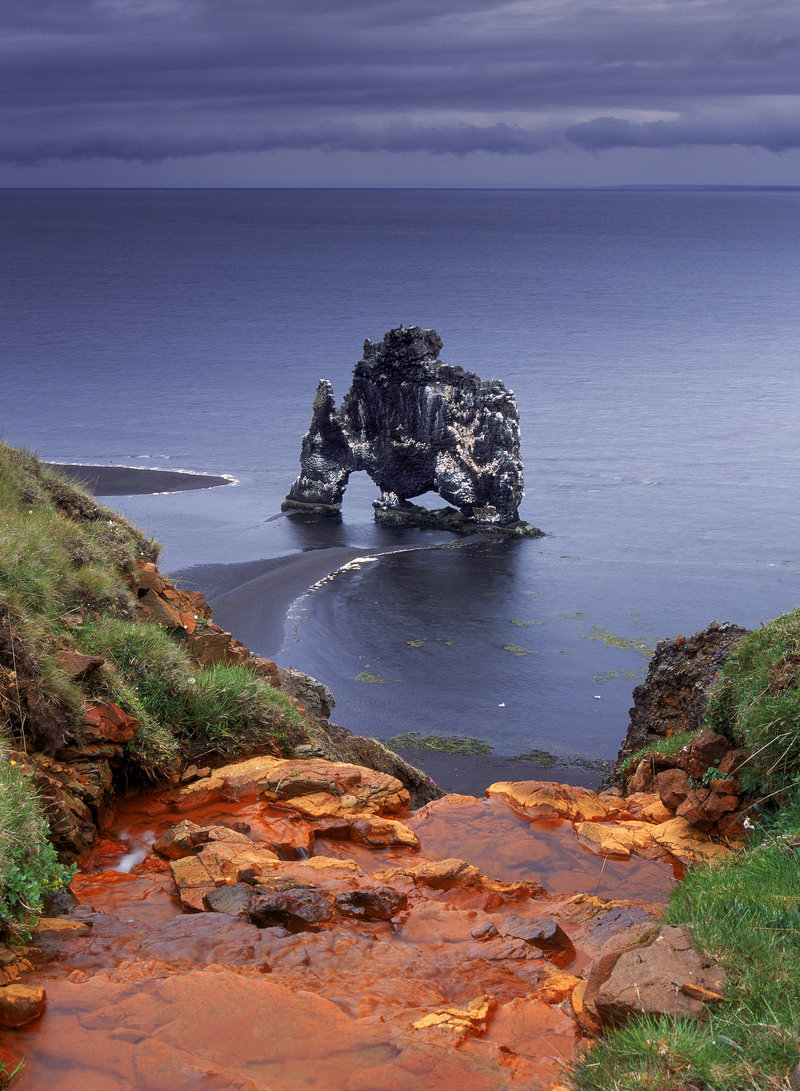 In Iceland, there are many beautiful places with a memorable landscape, a prime example of which is the area Landmannalaugar 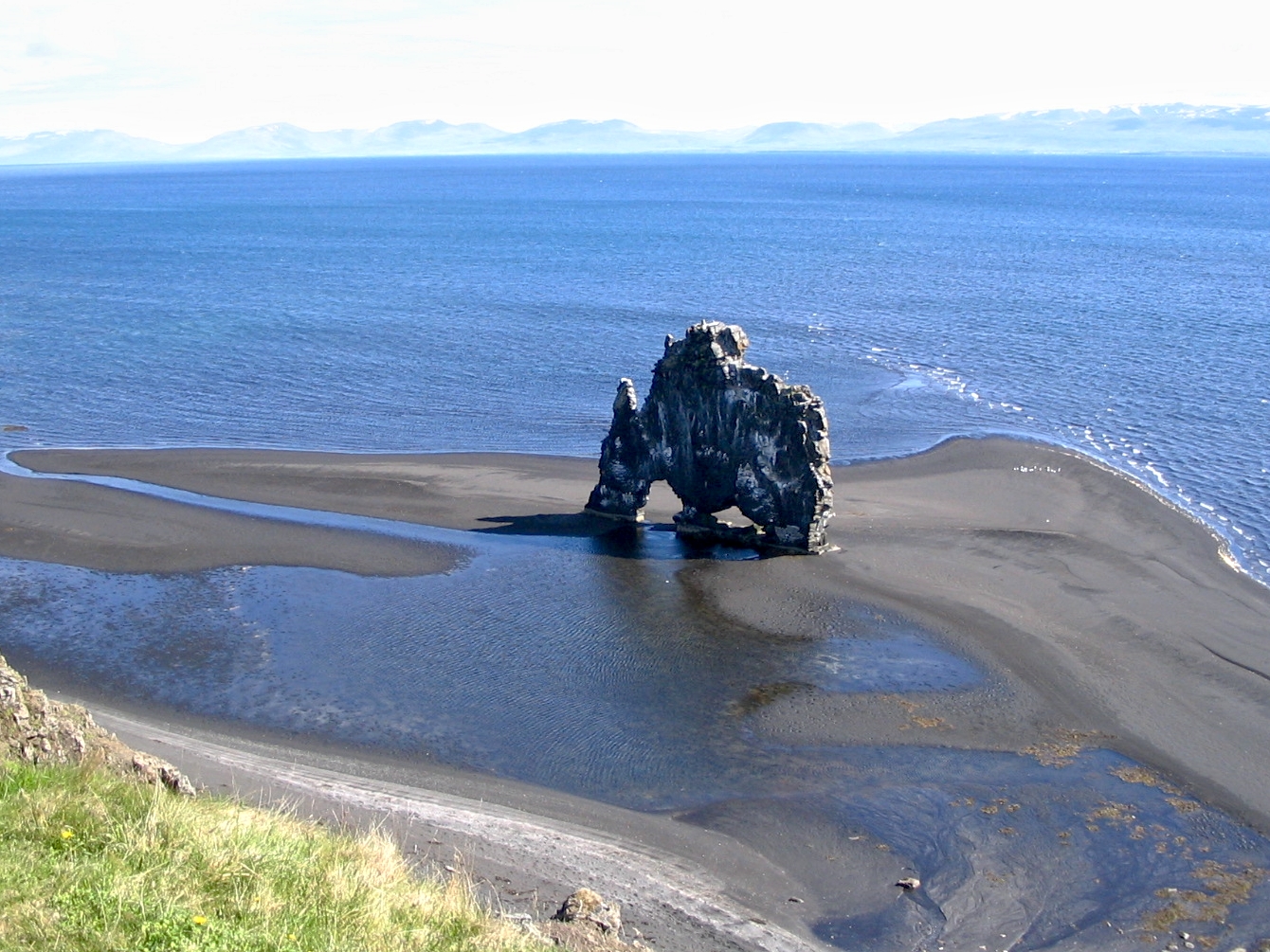 The bay of Hunaflói is indeed very rich in a variety of bird species. The rock has also found its place in Icelandic folklore. Legend has it that a troll, caught in the rays of the rising sun, petrified and froze this way. In 1990, the place was also immortalized on the country’s postage stamps. 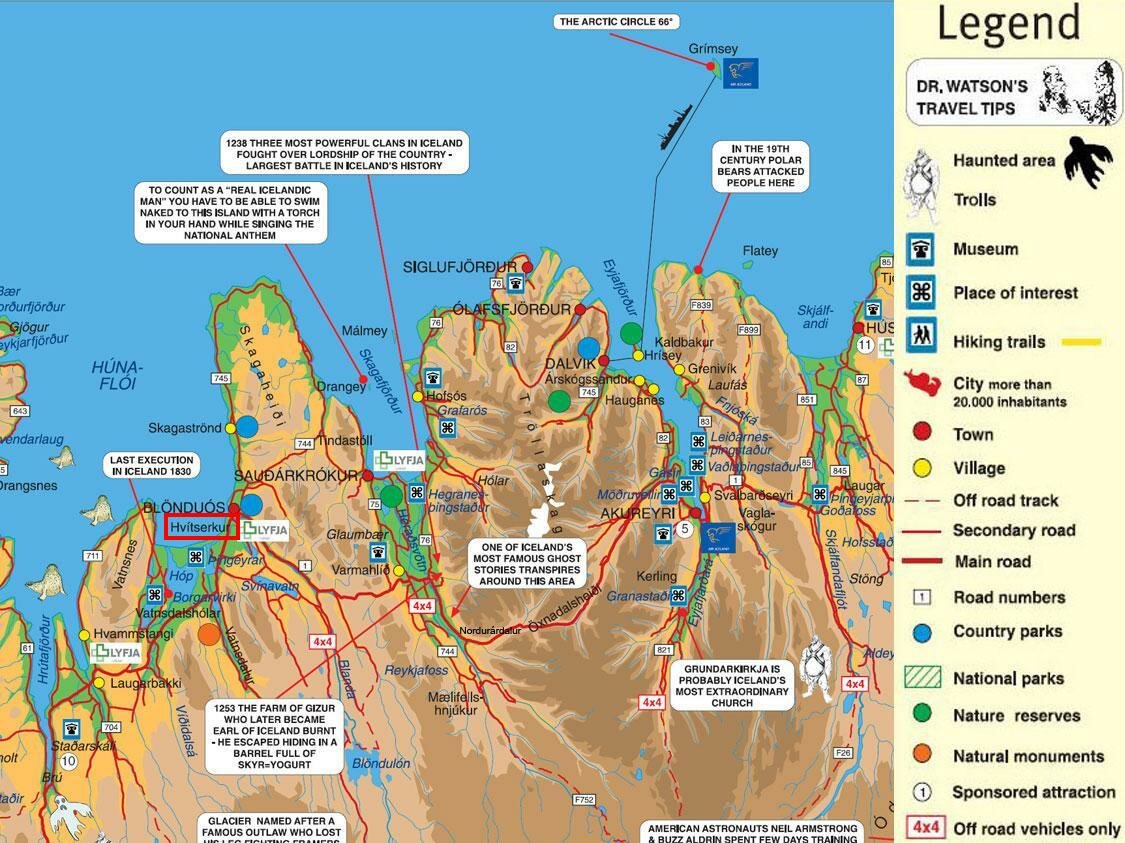 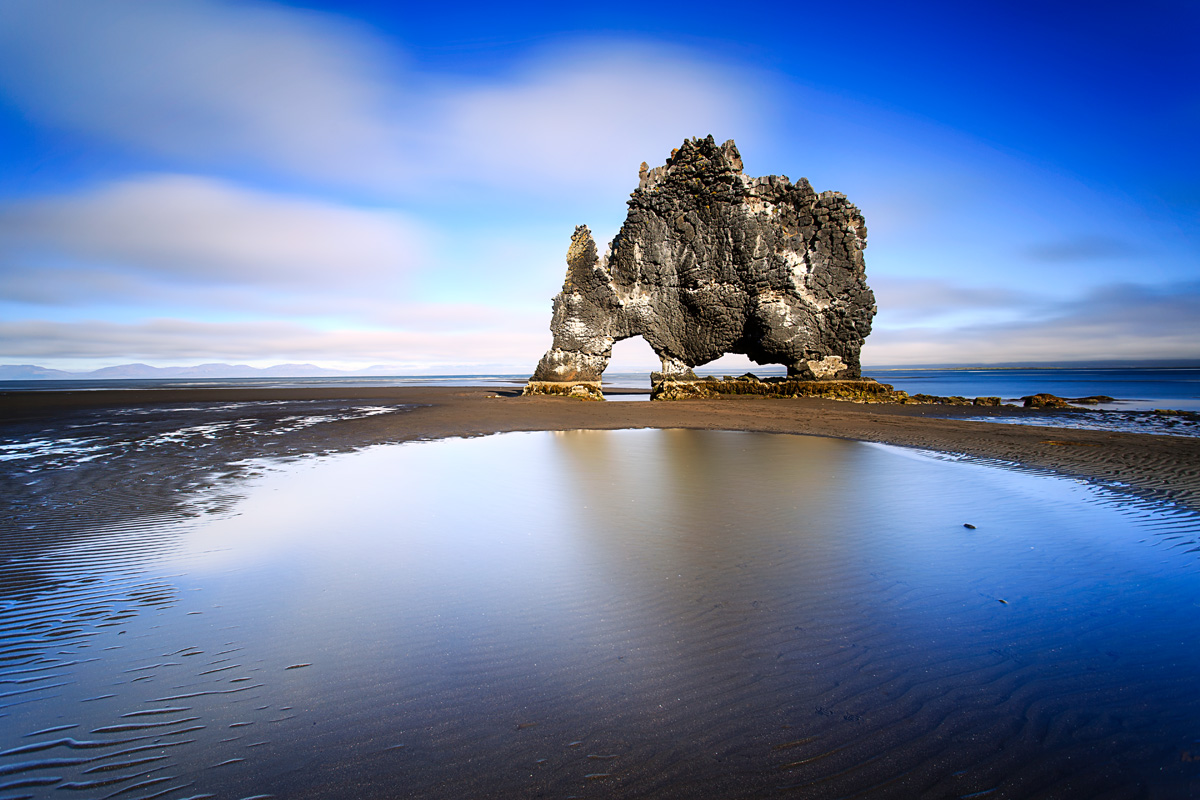 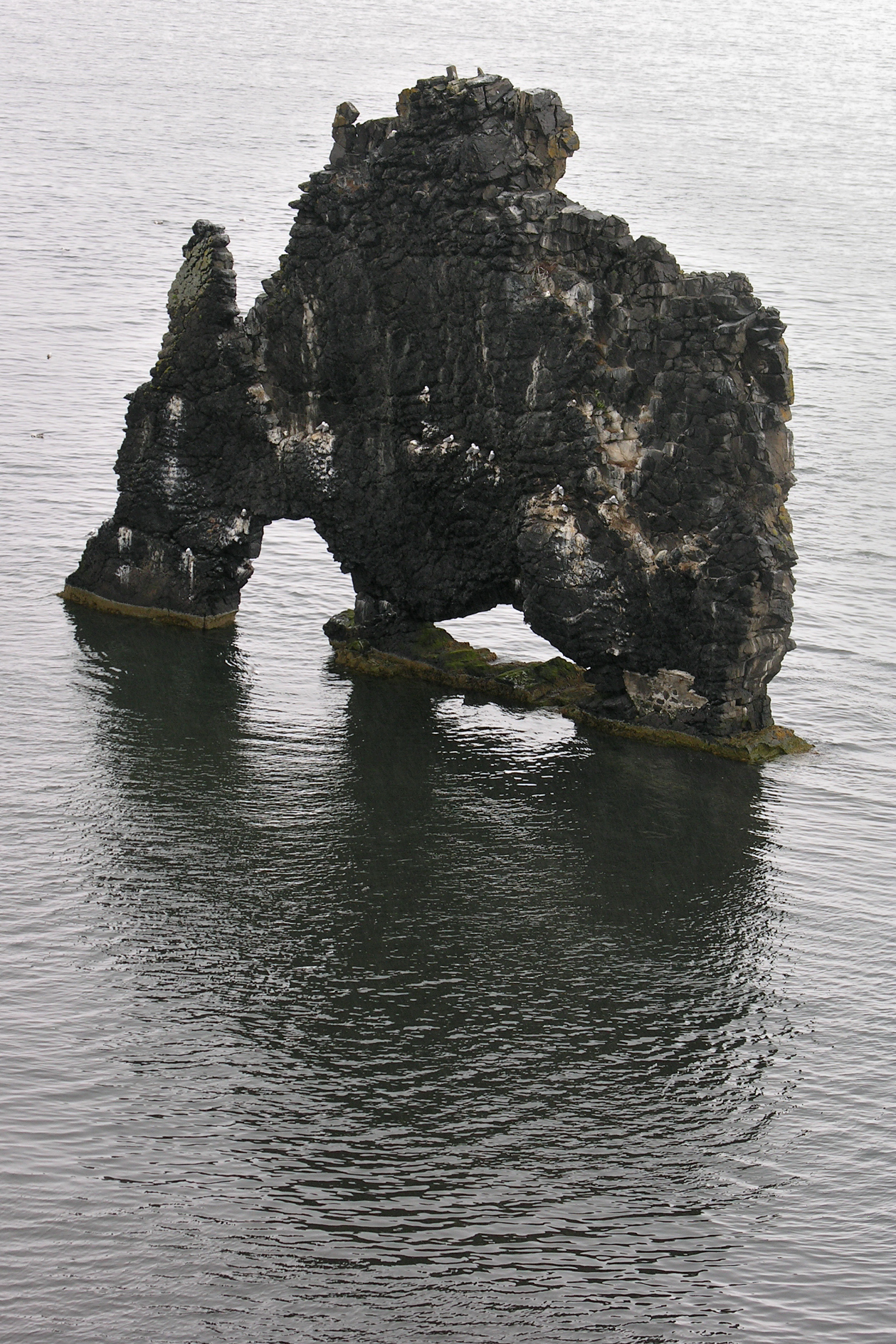 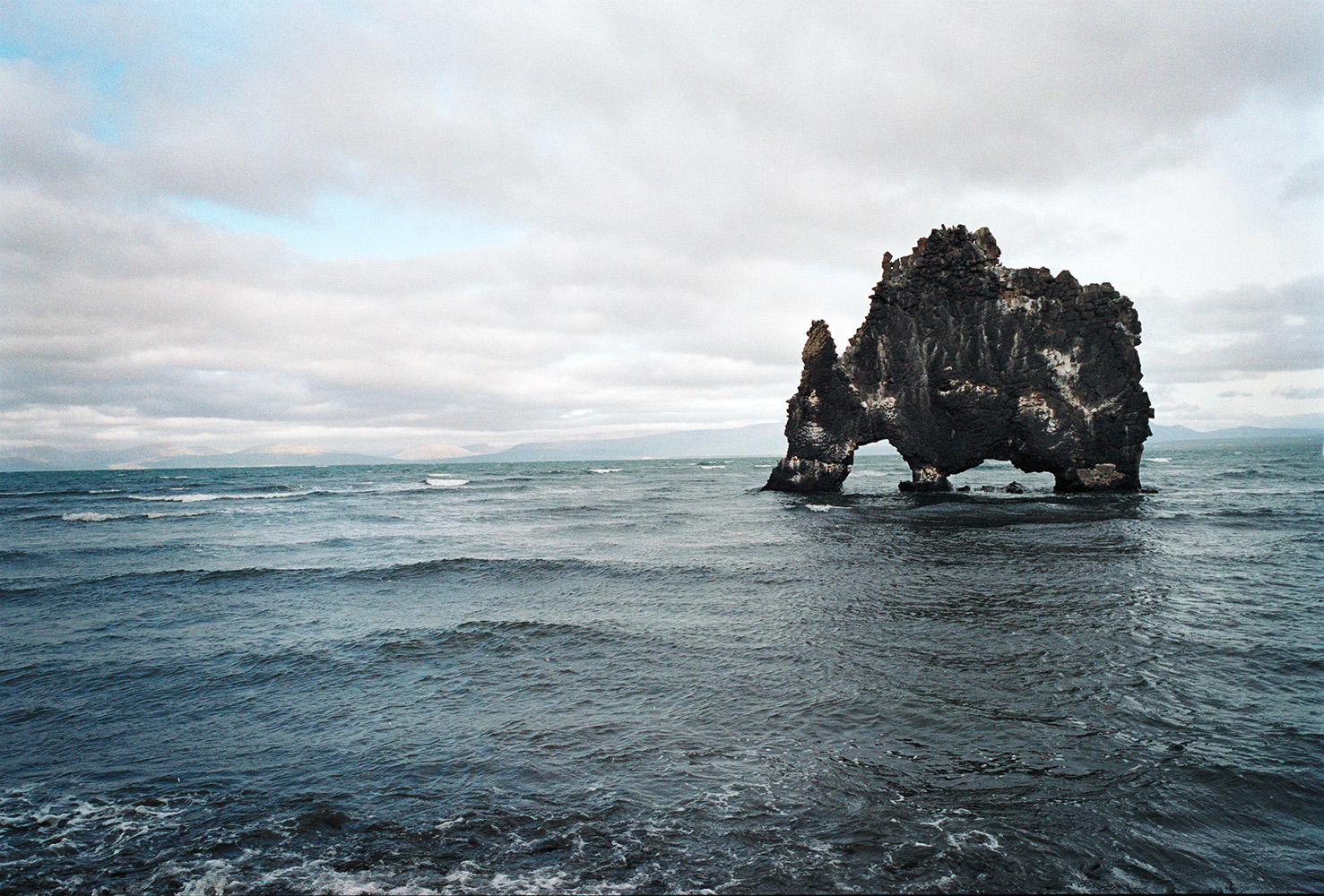 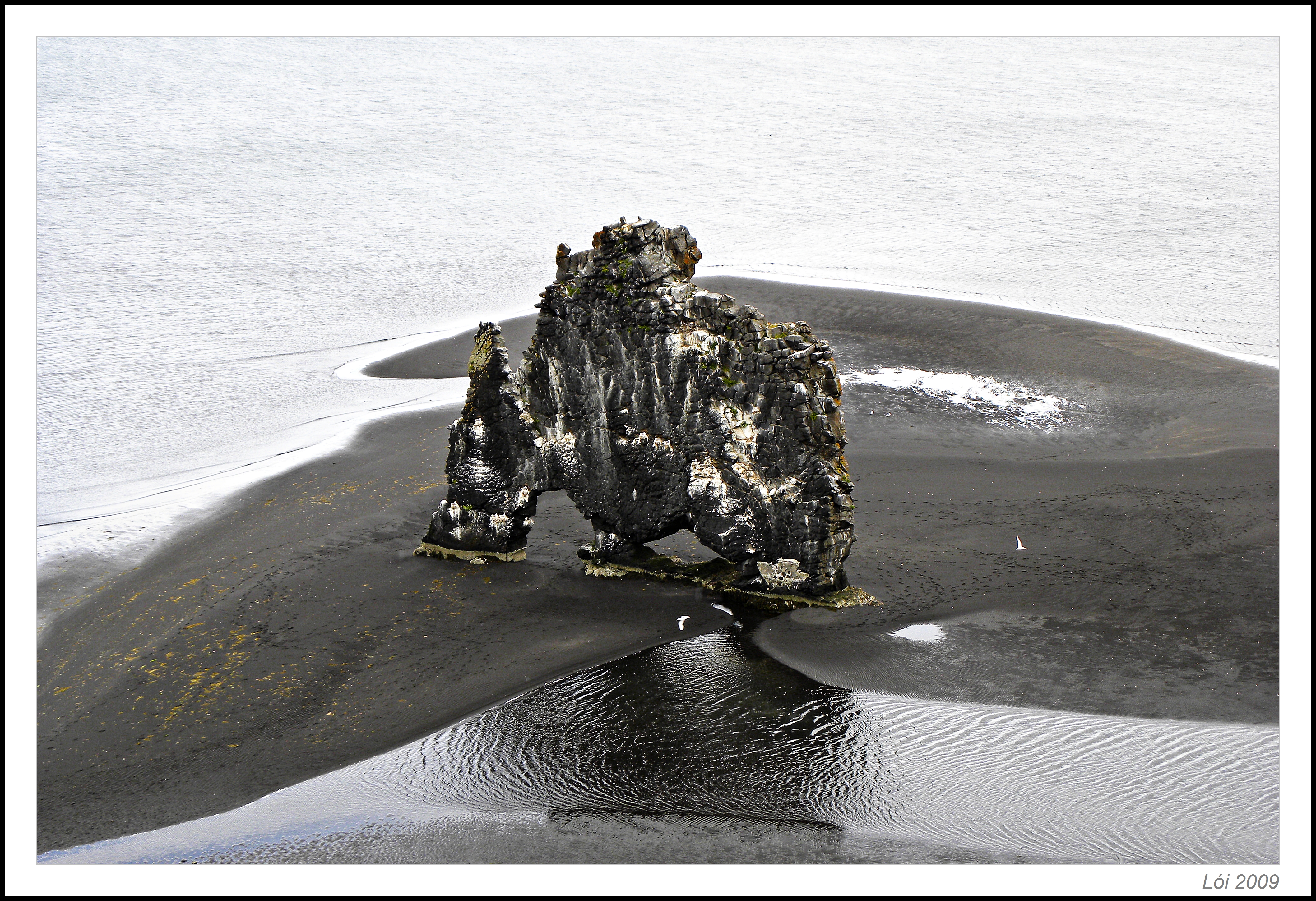 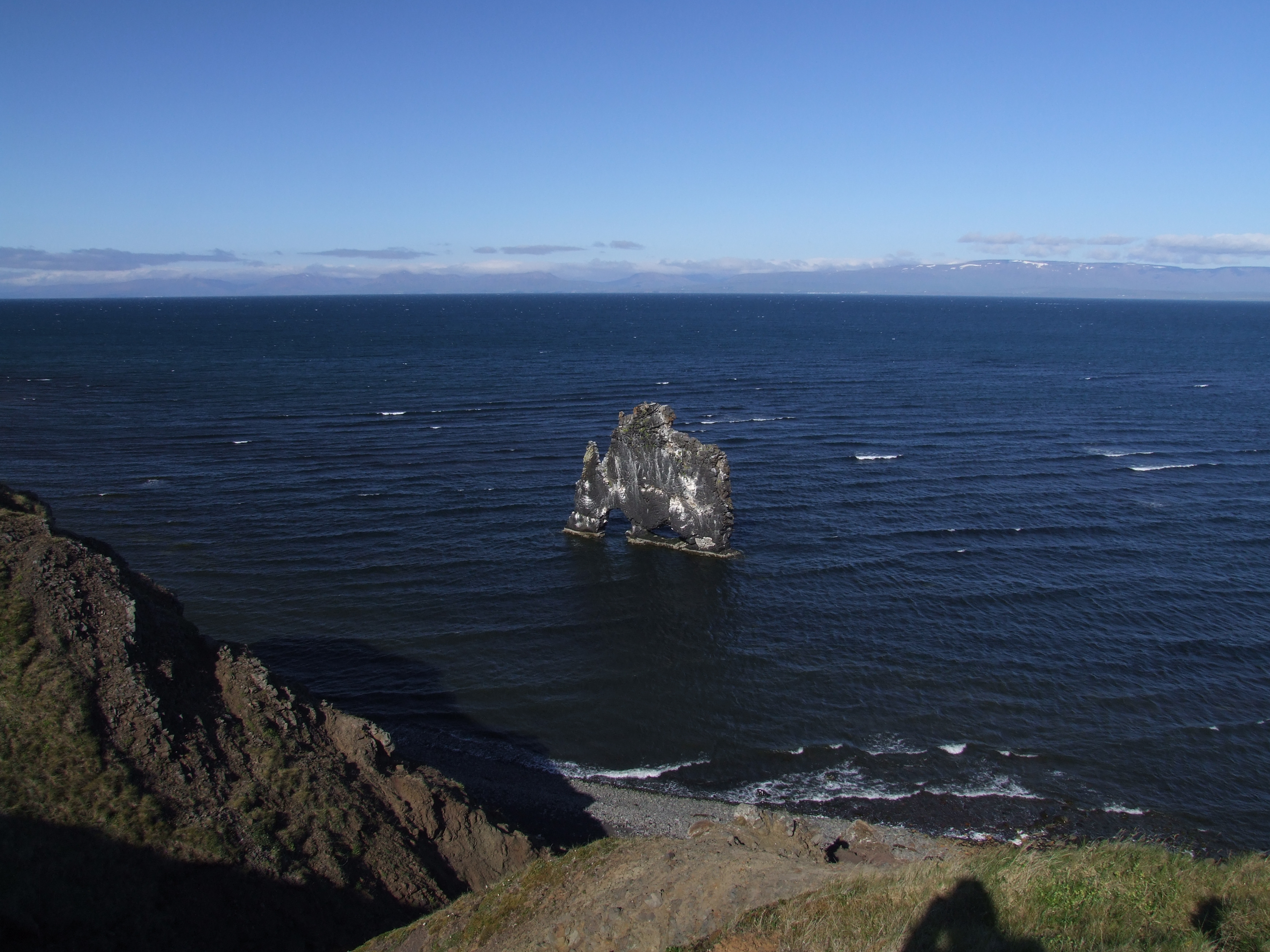 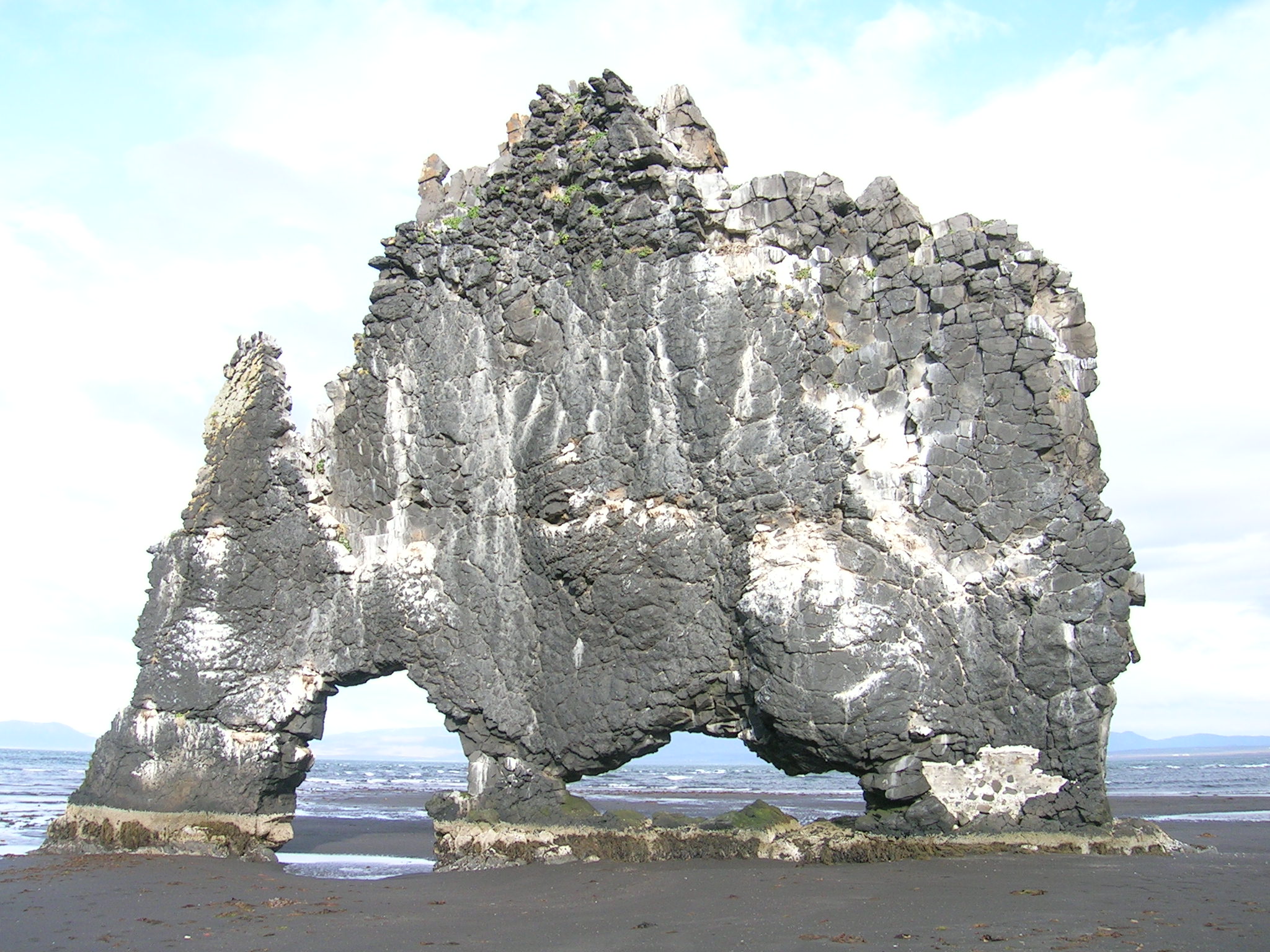 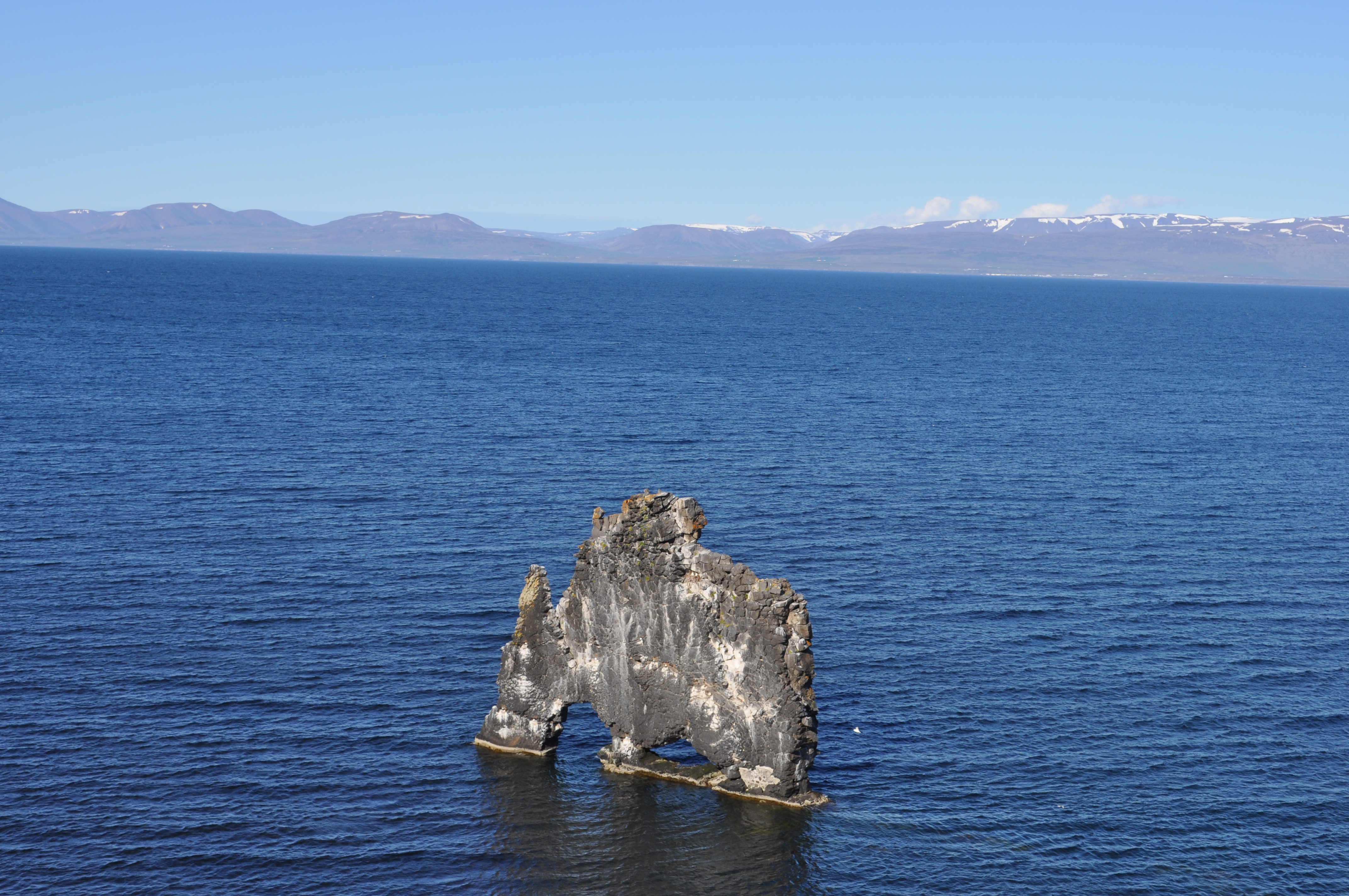 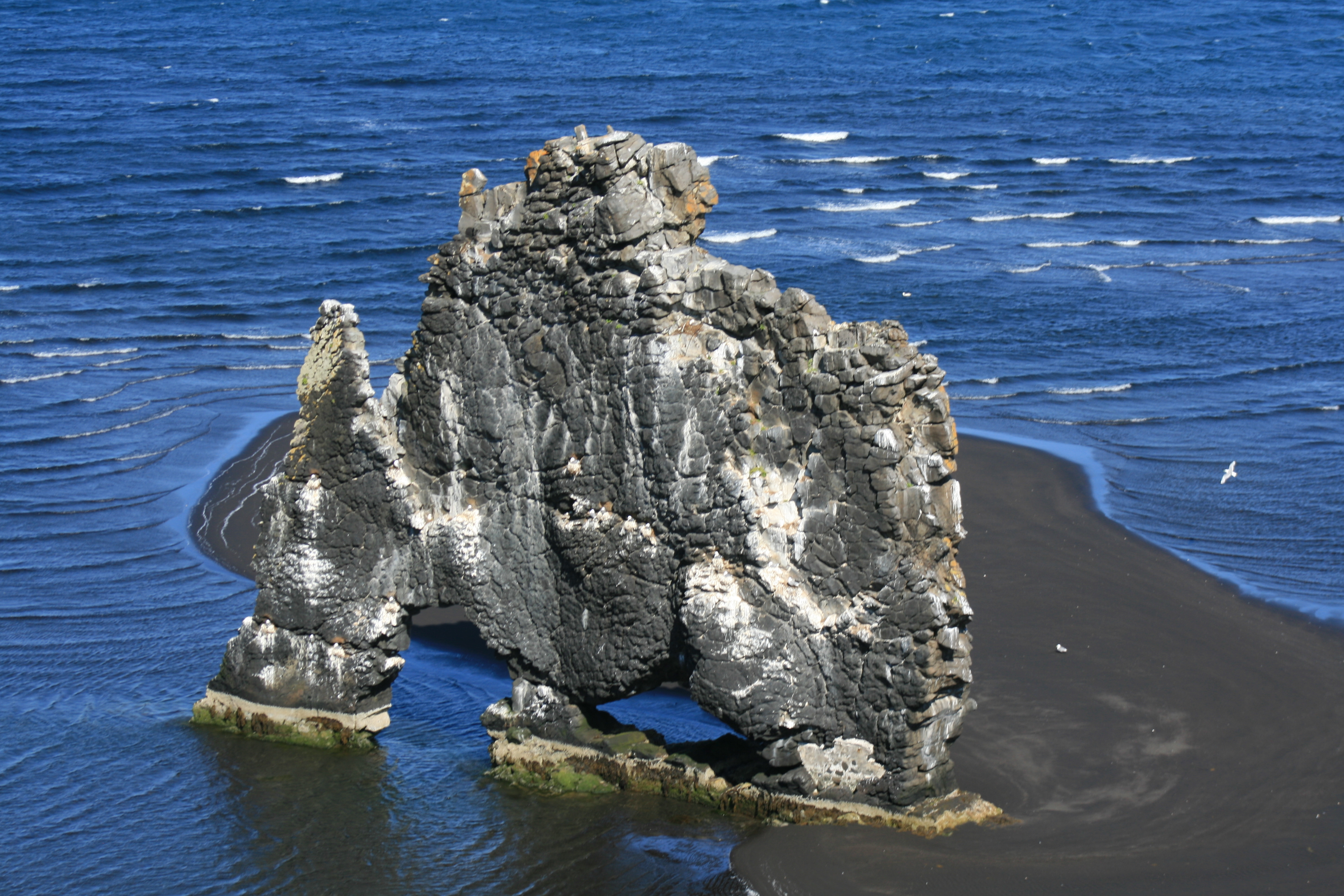 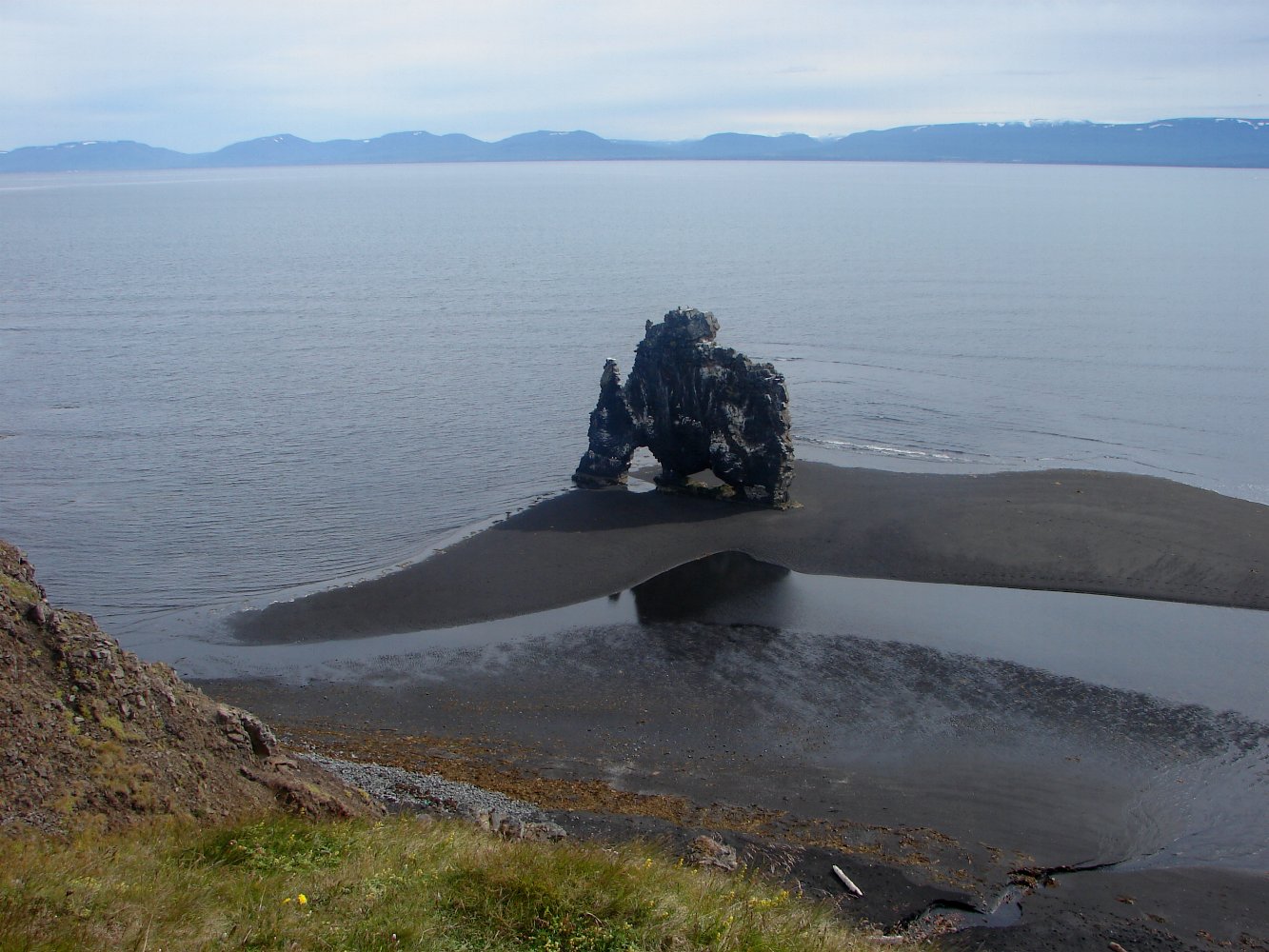 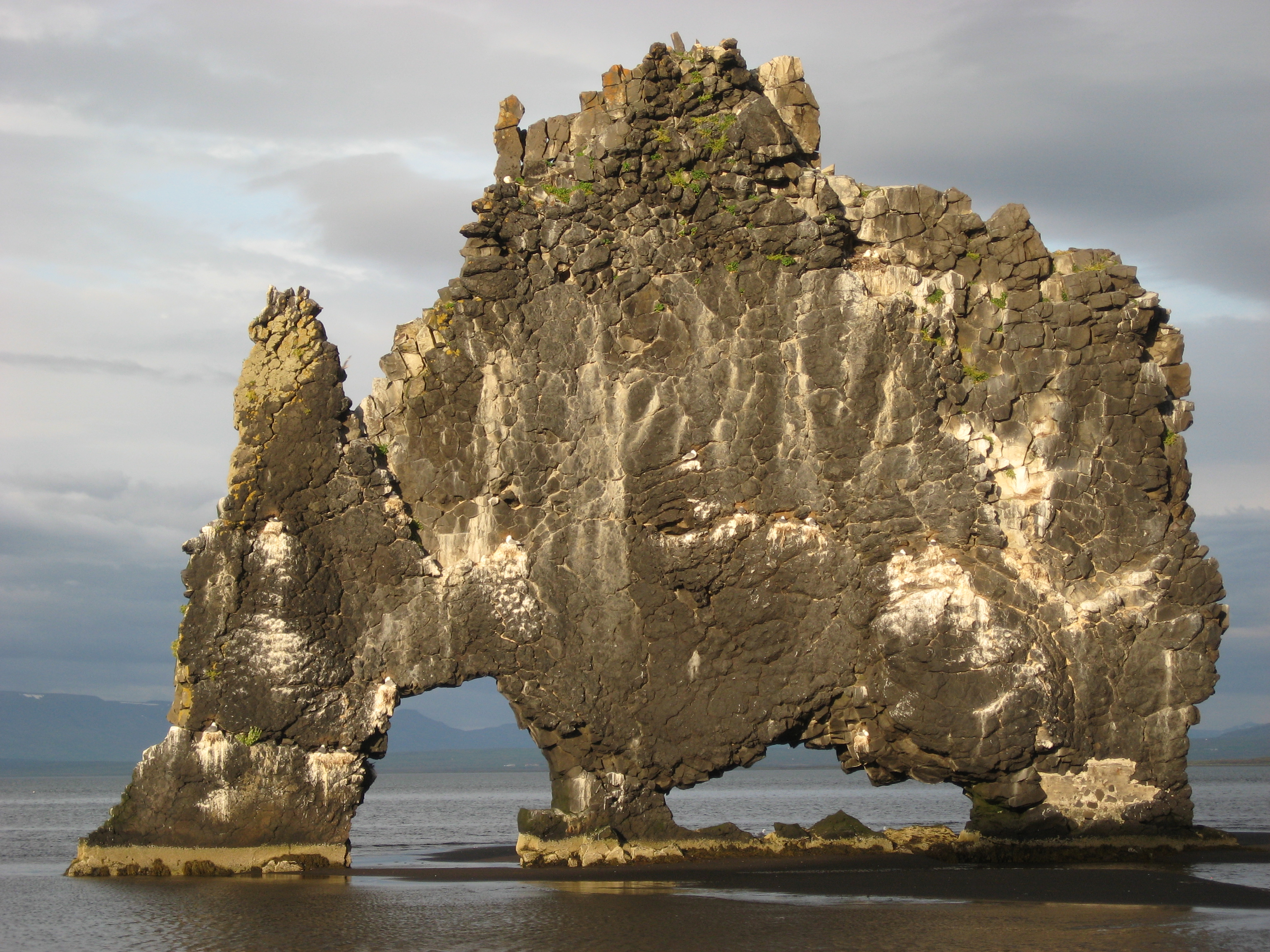 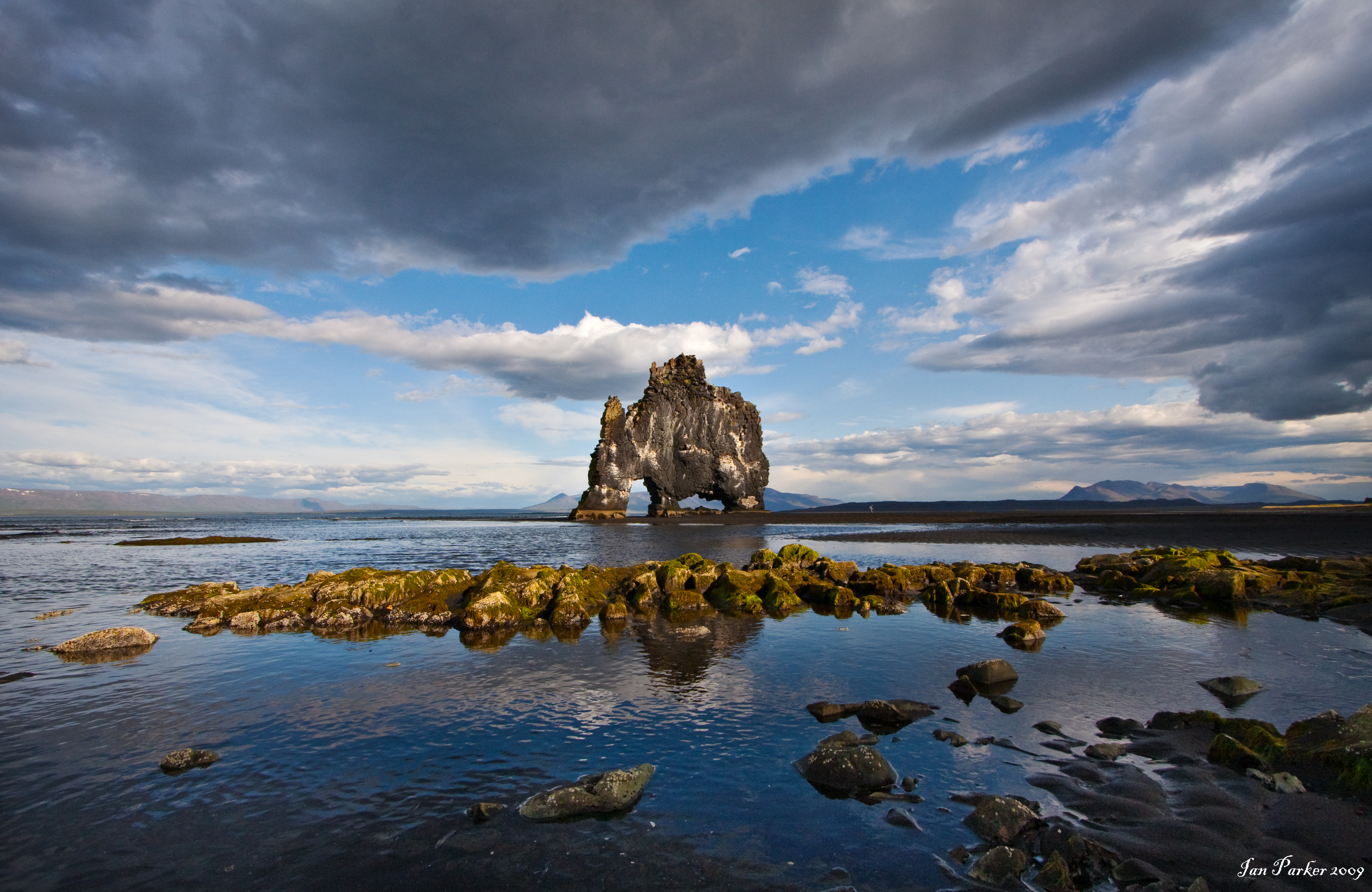 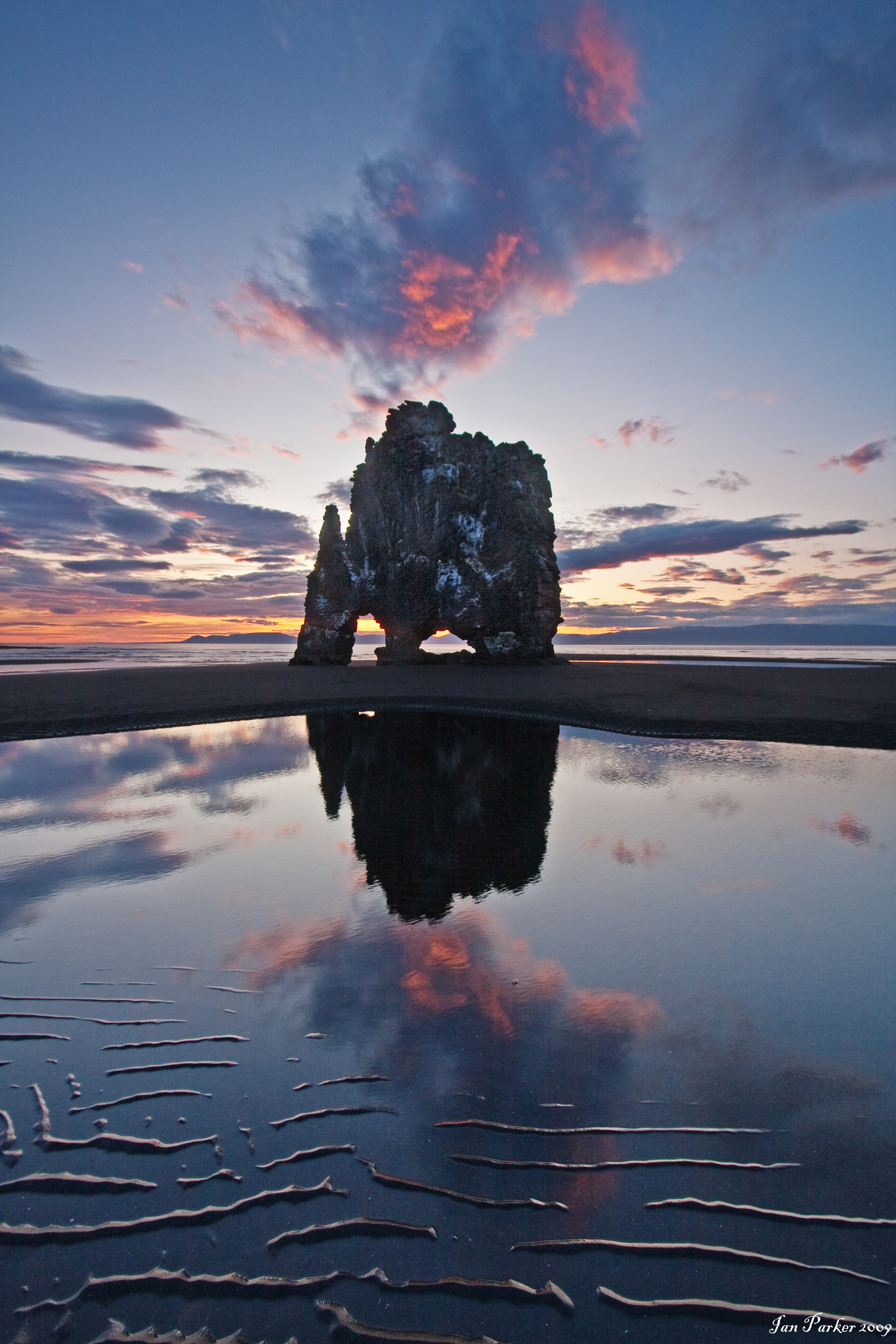 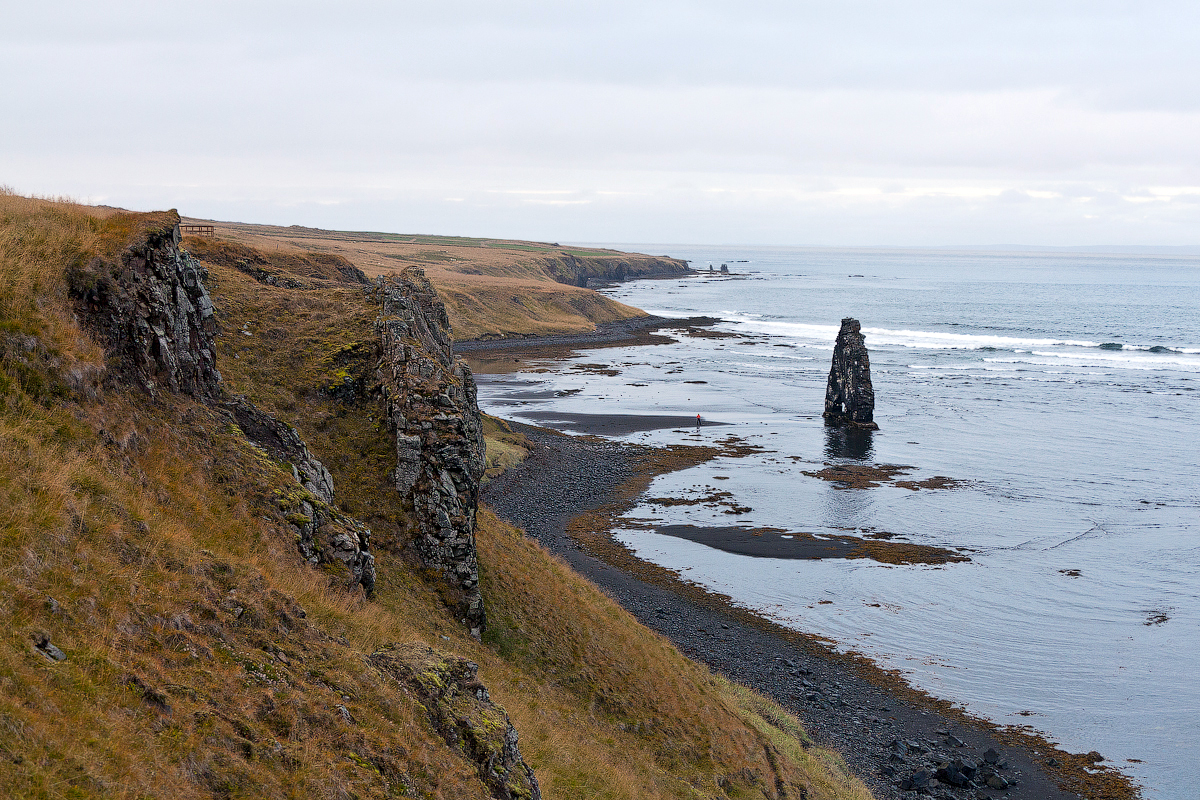 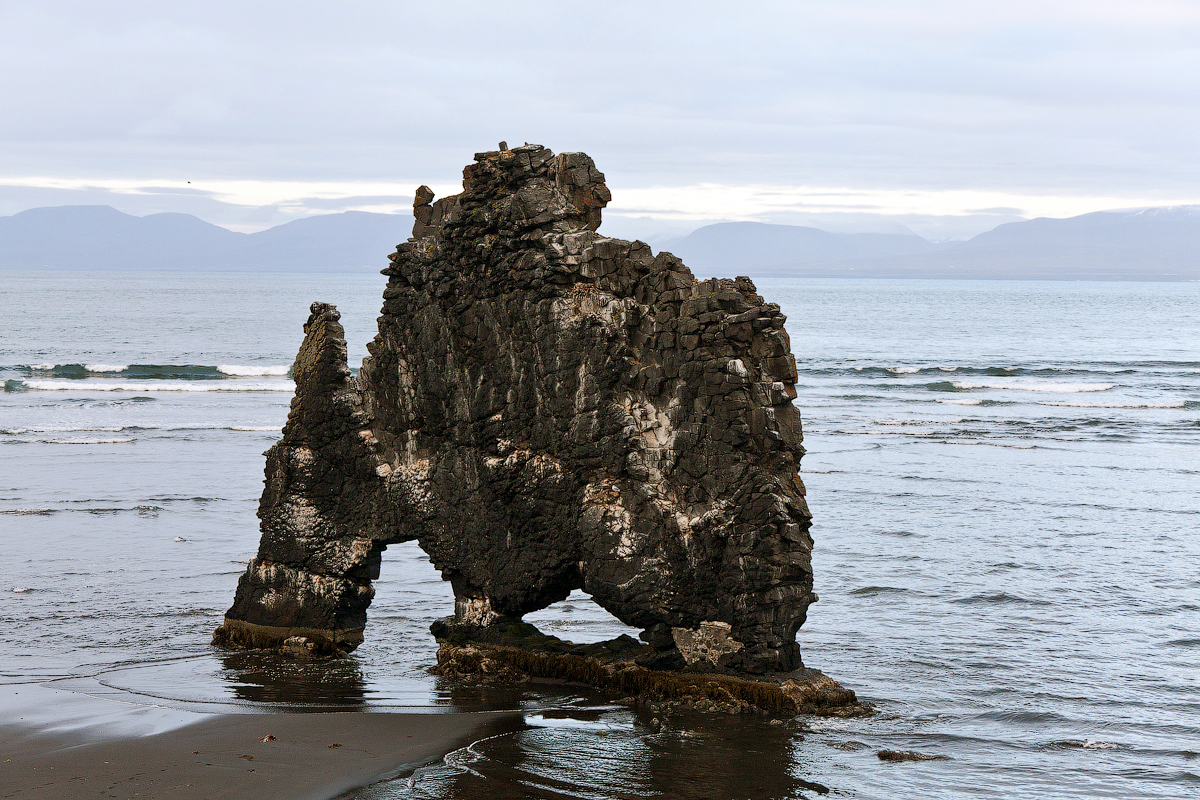 Other sights of Iceland, which we had a chance to see, can be recalled here