“Poor Niagara!” – Eleanor Roosevelt exclaimed as she barely glanced at Iguazu Falls. This breathtaking natural spectacle is located on the border of Brazil and Argentina.

More than one first lady has been captivated by the elements; tourists from all over the world flock to Iguaçu Falls.

Save money on travel!

The name in the vernacular of the local Guaraní tribe, who have lived on the banks of the Iguazú River for centuries, means “Big Water”. The river flows for 2.7 km and forms a cascade of 270 individual waterfalls on the edge of a 75 m deep fault. This fault is called the Gargantadel Diablo (“Devil’s Mouth”). The local tribes have formed many naive tales, legends and myths about the emergence of the “Big Water”. The most poetic of these is the legend of the chief’s beautiful daughter, young Naipi. Here’s how it goes:

On the banks of the Iguazu River lived a beautiful chief’s daughter named Naipi. She fell in love with the bravest warrior in their tribe. But alas, she had already been promised in marriage to the divine serpent M’bon. In despair, Naipi and her warrior got into a canoe and sailed down the river, which was then quiet and peaceful. But suddenly M’boi awoke and found that his bride had escaped. In a rage he plunged as hard as he could into the river. The force of the impact cracked the ground and the water rushed into a deep hollow. M’boi turned the brave warrior into a cliff to be whipped and whipped forever by the cruel water. And he turned the beautiful Naipi into a palm tree on the bank of the Great Water. When the wind blows in the evening, the palm tree can stretch out its arms-branches to the beloved in longing, but it will never reach him.

Geologists, on the other hand, believe that the fault was the result of tectonic shifts that took place 100,000 years ago. “The Devil’s Mouth” was formed where the bottom of the river failed, leaving a steep precipice from which cascades of water flow these days.

The Iguazu River is about 1320 kilometers long and is formed from the confluence of the Atuba and Iran Rivers near the Brazilian city of Curitiba. For several miles it flows through the Brazilian province of Paraná, where it defines the border between Argentina and Brazil. This means that the waterfalls occupy the territory of both Brazil and Argentina: 800 m of cascades belong to the former and 1,900 m of the latter. And although the closest you can get to the Devil’s Mouth is from the Argentine side, the most favorable view is from the Brazilian side. Until recently, 7,000 cubic meters of water flowed over the edge of the Devil’s Mouth every second. Now, however, a dam has been built upstream in Salto de Caixa, which has reduced the volume of water by two-thirds. Although Iguazu Falls and the surrounding areas were declared a UNESCO World Heritage Site in 1986, they are still under threat.

Brazil’s Iguaçu National Park is home to many rare and endangered birds and animals and has five types of forests and ecosystems. On the Argentine side, visitors can walk a variety of hiking trails, some of which are laid out literally on the edge of the precipice below the waterfall.

There are regular flights to Foz to Iguazu from Rio de Janeiro as well as other Brazilian cities, and daily flights from Buenos Aires to Puerto Iguazu, or you can take the Friendship Bridge from Ciudad del Este on the Paraguayan side.

Iguazu Falls – the most powerful waterfall on the planet

This South American landmark is actually a collection of hundreds of large and small cascading streams of water. Sometimes they are referred to as the plural “Iguazu Falls”. There are thought to be 275 of them. But if you look at them, it is not quite clear how the calculation was made. In addition, depending on the season, the volume of streams, and therefore their number, are different.

In our humble opinion, we should not count the number, but simply accept the fact that Iguazu (unlike Angel or Tugela) is a whole water complex, not one powerful stream. 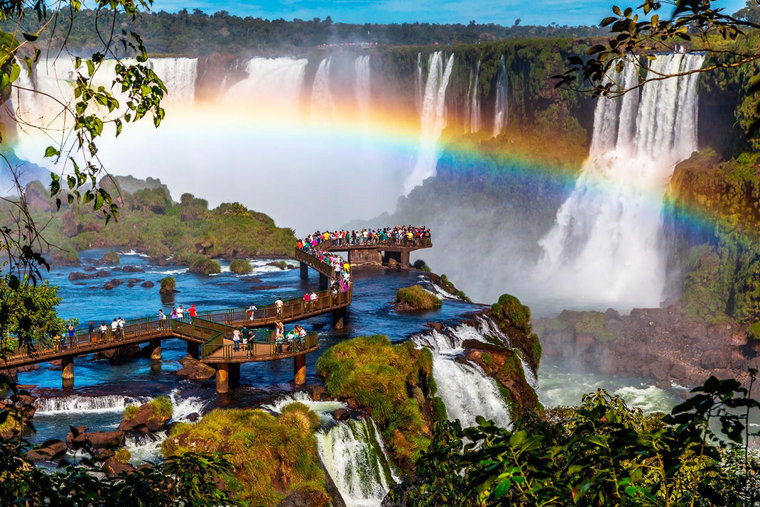 Iguazu Falls on the map