The streets of India are particularly winding and confusing. Therefore, one of the most common means of transport in this country are rickshaws – a kind of carts, but the function of horses in them successfully performed by people. 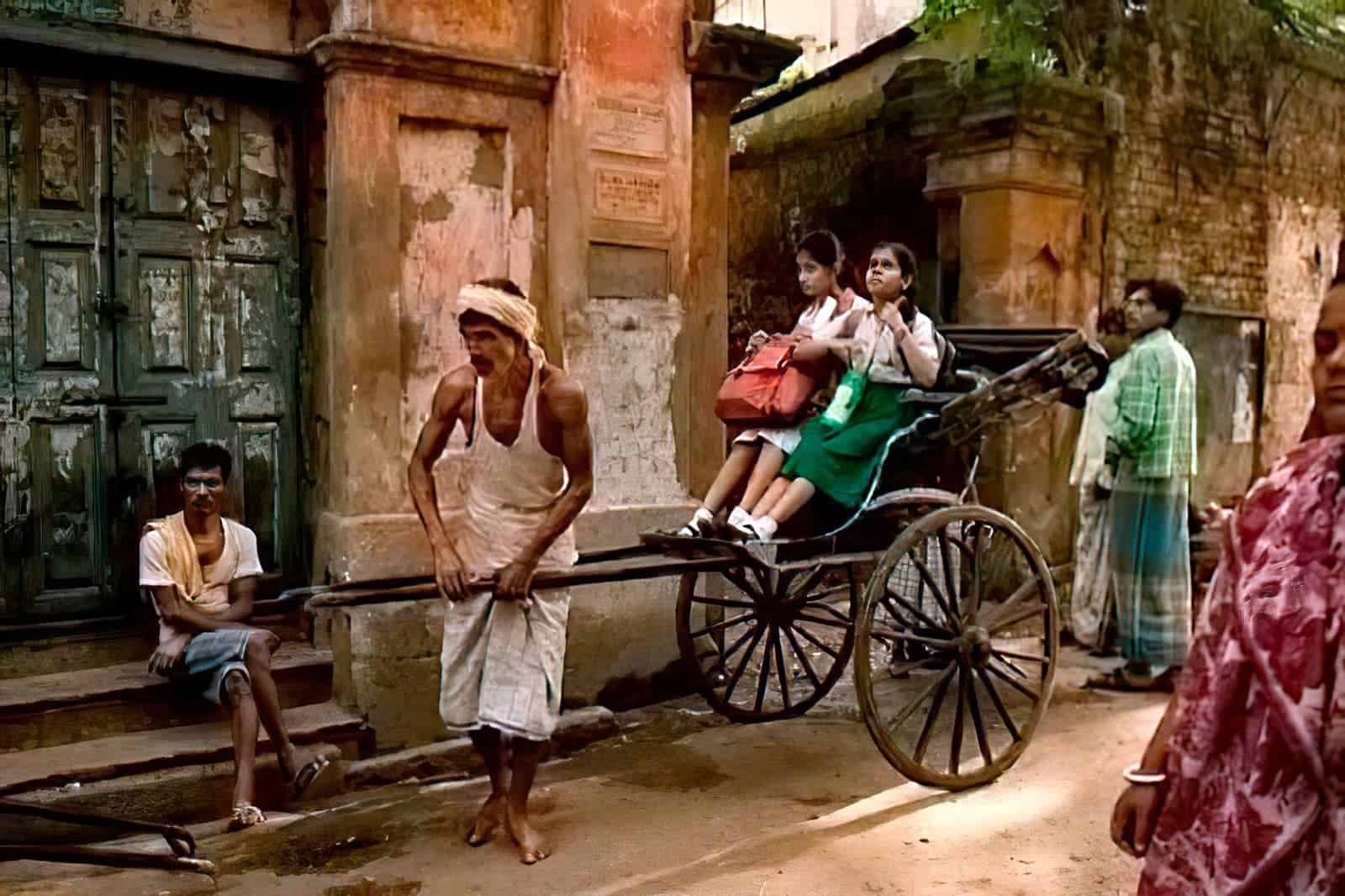 While in many other countries this “transport” is used as an exclusive entertainment for tourists, in India rickshaws are used everywhere. This is mainly due to the low level of inhabitants and the presence of a large number of poor people who are willing to do a truly horse work for pennies.

There are several varieties of rickshaws in India: 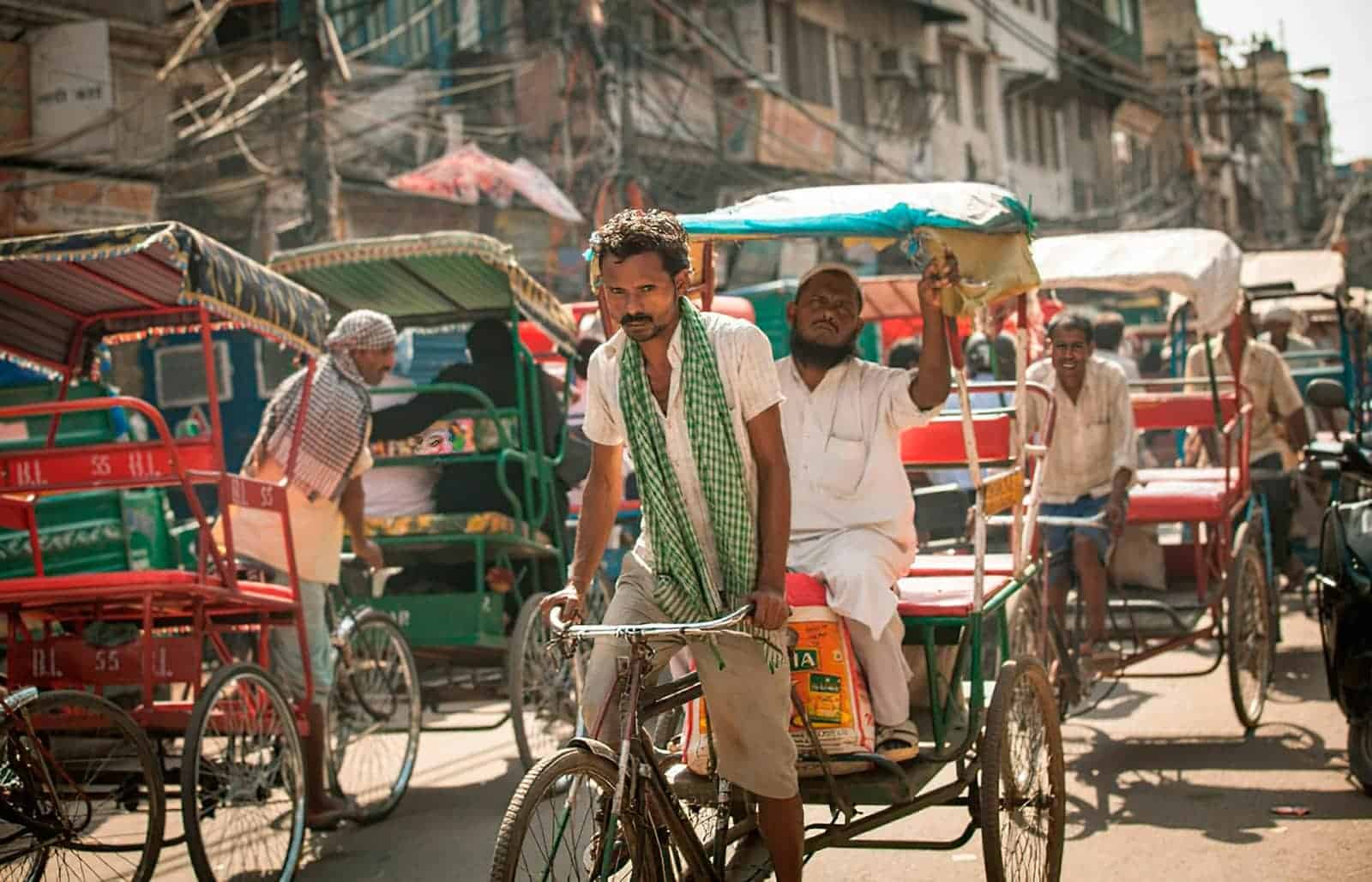 Ordinary rickshaws are banned in India because they are unaesthetic and ugly. But in the east of India, in Calcutta, you can still find poor, barefoot, ragged men who earn their living by this kind of hard work. Many of them come to the city to feed their families, even though they get a pittance for their work. 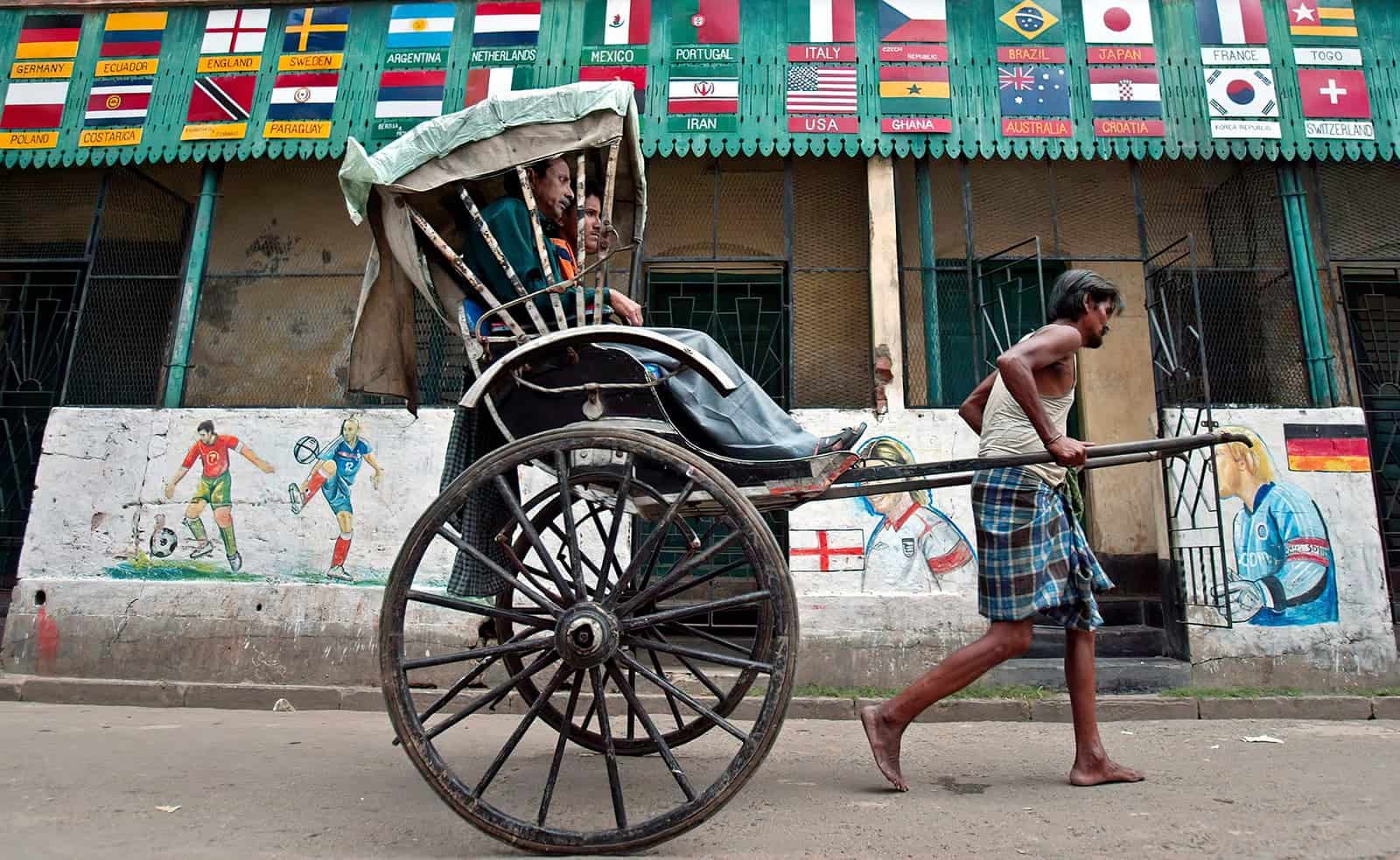 The very first rickshaw models date back to the reign of Louis XIV. It harnessed a man to transport passengers and various goods. In 1870, a missionary from America patented this construction. The idea was to create it for his wife, who had poor health. The Japanese began to actively use such an invention in their everyday life. India also adopted this idea.

And in 1930, the first bicycle rickshaw appeared. It was different from the previous rickshaw, which was pulled by a man with two shafts. Its design resembled a tricycle. A worker was now sitting on top and pedaling, rather than dragging his own feet across the hot, muddy ground.

Severe need and poverty compel Hindus to take this kind of work. Therefore, they do not pass up the opportunity to earn more money on tourists and all the people distant from their industry. Therefore it is recommended to negotiate the final cost of the trip with the driver before the departure, so that there is no misunderstanding.

Usually a ride from one end of the city to the other will cost you around 150 rupees. But if the rickshaw driver notices that the tourist is not aware of the rates, he will not miss the opportunity to earn several times more. As a rule, at all railway stations there are special offices where every visitor can order and pay for a ride over the required distance with a rickshaw. 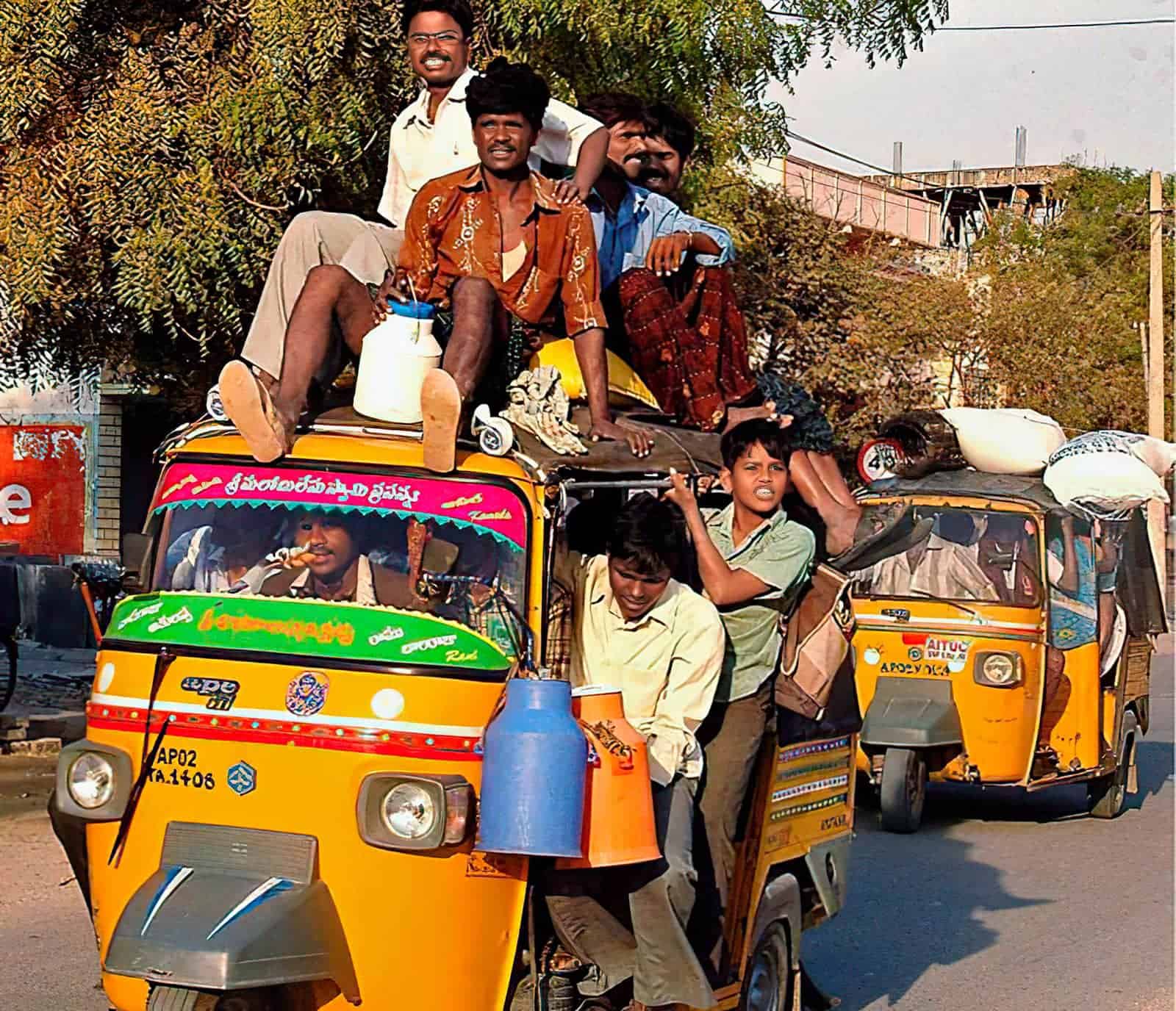 There are a lot of rickshaws in all major cities. All of them are in constant search of customers . As a rule, the rickshaw works for a private company, because he can’t afford to buy a carriage on his own. The big commercial firms have 1,000 of these carts, employing the poorest people from the poorest neighborhoods and districts of the country.

Sometimes they have to live in the open air to save a penny to rent a miserable place to get by.

But since 2005, the use of rickshaws has been banned in India, although there are still some poor towns that willingly use the labor of the poor as a cheap means of transportation, despite the bans of the authorities. Cab services are increasingly in demand, and rickshaws, according to the Indian government, have become obsolete and are ruining the country’s reputation.

Cabs and rickshaws – nuances of urban transport in India

Every year more and more Russian tourists are discovering India, which attracts with its fabulous views and rich history. The abundance of attractions even in a single city is simply stunning, and trying to get around them “on your own” is simply impossible.

Also, do not rely on public transport, it is more for the locals and is extremely inconvenient to use for tourism purposes. What is the best way out – rent a car, cab or rickshaw?

Is it possible to rent a car?

By and large, and India is quite possible to rent or lease a car. However, before you do this, you need to realistically assess the peculiarities of this step. Firstly, you will need an international driver’s license and a compulsory insurance policy. But this is not the worst thing.

The main obstacle for independent driving on Indian roads is peculiarities of the traffic management, and they are not limited to left-hand traffic. The problem is in a very free interpretation of traffic rules by its participants multiplied by the extremely busy streets with the most incredible vehicles, pedestrians and animals. That’s where the “law of the jungle” really applies – those who have a bigger car, who honk louder and who are brazen have the advantage.

For long distances between cities are excellent travel by train. This mode of transport is very common in India and is well developed.

If you don’t want to travel by train, you can use airlines. Read more about the airports in India.

If you want to have your own transport, it is better to rent a car with a local driver who knows the “technology” of getting around Indian cities.

The price for renting should not be too frightening – it is quite possible to find a small car for the price of $ 15-20 for a day, and the work of the driver is included in this amount. There are “packages” more expensive – they may include full refueling and unlimited daily mileage.

If you plan only a single trip, it is more profitable to take a cab. This type of public transport is represented in Indian cities by state or honest companies, which, however, does not particularly affect the cost of travel. 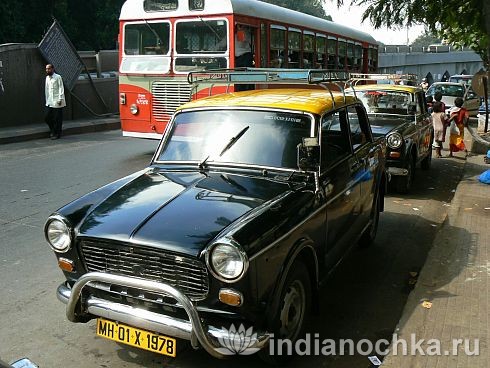 The state cab cars are painted black and yellow, and they are obligatory in parking lots near airports or train stations. The vast majority of the fleet is represented by Ambassadors, a peculiar Indian brand that has been in production for more than 50 years. The car is cramped, but quite bearable for city conditions. Now it is increasingly being replaced by the Tata Indica, also a small city car.

According to the existing rules, all cars must be equipped with taximeters, and the driver at the end of the trip must even give the passenger a receipt at his request. But in reality the situation is not so rosy – usually the principle “as you agree” works. Cab drivers are not distinguished by special altruism, and always try to pull out of the visitors more, sometimes slamming unthinkable prices, referring to the fact that the meter does not work. Do not fall for this – it is easier to go to another, more accommodating driver, to demand to turn on the meter and be sure to check the initial zero values.

Most of the old taximeters do not display the fare, but the mileage, which is then converted into rupees by a special “conversion table”. You can buy such tablets at newsstands and when getting into a cab it is better to let the driver know that you are aware of the payment procedure, as he is unlikely to extort more.

The average cost per kilometer is 10 to 15 rupees and the night fare can be 1.5 times higher. If possible, it is better to know in advance the approximate cost of travel to the right place (the hotel staff, the police, street vendors, etc.) and be guided by it in the bargaining process with the driver.

It is excellent if the tourist was able to use the service prepaid taxi – such offices can be found at railway stations and airports. The cashier will take the payment for the trip, taking into account the distance, the presence of luggage, number of passengers, issue a receipt and give the car number. Cab drivers are not very fond of this system, which deprives them of additional income, and try to impose some surcharges at the end of the trip – extra charge for luggage, tips, excess distance, etc. However, if you firmly refuse and threaten to go to the police, the conflict is over.

READ
The cost of housing in Cambodia, rent

Many hotels practice calling a cab and paying directly at the reception, which is also quite convenient (although somewhat more expensive). As a rule, you can be sure of timely arrival of the car. It is also important to have a receipt as a trump card in the “fight” with the cab driver.

In some places (train stations, tourist centers) there is a “fixed price” – a fixed price for the most popular routes, which is almost impossible to knock down, even though it may be 20-30% higher than the standard rates.

For those who like comfort or come early in the morning or late at night, and especially for those traveling with children the best option would be to book a transfer. It is possible to order a transfer in advance, even from the house, the driver will meet you with a sign right at the airport and take you to the place without any problems. You can do it here.

To be in India – and not take a rickshaw? 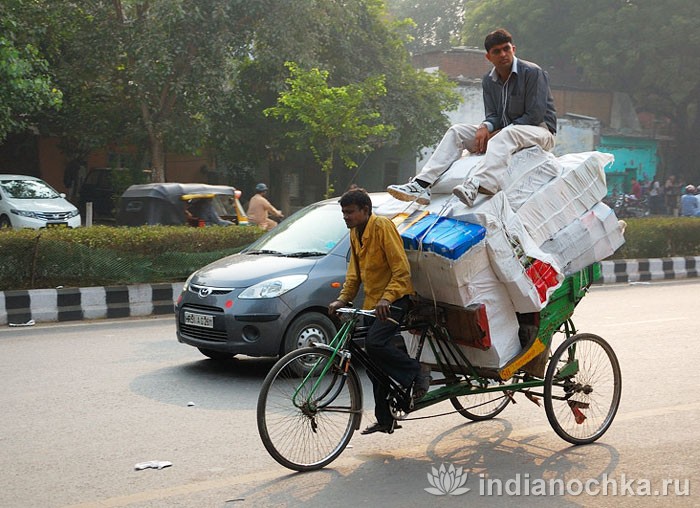 This form of public transport is probably the most common in India. In fact, there are no rickshaws in the classical sense of the word, when the baby carriage is pulled by a man, they are prohibited by law. Only bicycle rickshaws and motor rickshaws (often called autorickshaws or tuk-tuks) are used.

Bicycle rickshaws are not characterized by high-speed qualities, are convenient only for moving short distances or for sightseeing, located in a fairly compact area. The fare is low and is negotiated at the beginning of the trip. For tourists, most often it is an element of the exotic, to consider the cycle rickshaw purely from a transport point of view is not necessary. Although sometimes, for example in pedestrian areas, they are the only possible solution. 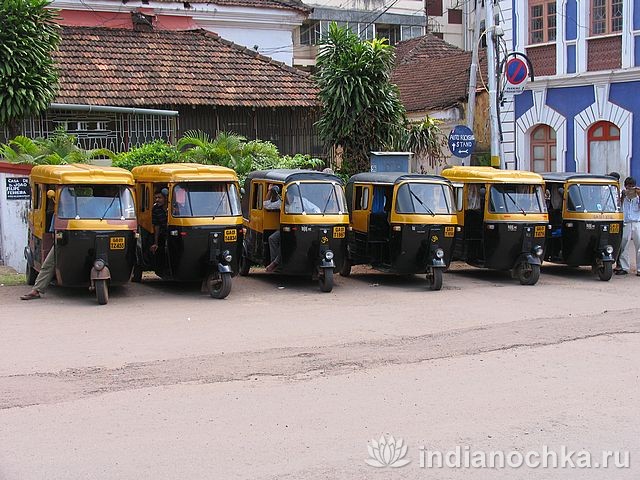 But motor rickshaws are striking in their variety and multiplicity. The most common type – small passenger crews for 2-3 passengers, installed on a three-wheeled motor-chassis. The most popular model – “bajaj” (bajaj), produced since 1977. Over a long distance trip in it will be very tedious task, but for the city is suitable.

The cost of such a vehicle ranges from Rs. 5 to 10 per kilometer, based on the normal established rates. Many rickshaws are equipped with meters, but getting the driver (also called a rickshaw) to turn it on is quite difficult. If it is fundamentally important, then you can threaten to go to the police, as a rule – it helps.

The rickshaws of certified transportation companies are also covered by the “prepaid” system. But they are not so enthusiastic about it as they try to dissuade tourists from this affair, but they can hardly refuse a ride they have already paid for.

READ
What vaccinations to get before traveling to India and Goa

Bargaining with a rickshaw regarding the route and cost of travel is a science full of nuances.

What sights to see in Mumbai, India’s most populous city?

India’s population is growing every year. By 2030 there is a good chance to reach the first place in the world, overtaking the Chinese: https://indianochka.ru/india/obshhestvo/naselenie.html

READ
Where can I go to rest inexpensively

Both in case of taking a cab and choosing a rickshaw one should be as benevolent and reserved as possible, not to be greedy or show irritation. If the language barrier does not deter you, you can try to establish personal contact with the driver – it always helps to travel cheaper and more comfortably.