The Palace (Château) of Jacques Coeur in Bourget, the Dawn of Medieval Gothic

A person who has seen luxurious European palaces may think that there is nothing at all interesting in this dilapidated building, but that is a profound misconception. In terms of the history of the development of the Gothic style of residential buildings, the building is a true masterpiece. The architect has used so many new original elements and details in the design of the facade and interior that the most striking and innovative Gothic palace of the XV century has turned out, not only in France but also in all Europe. 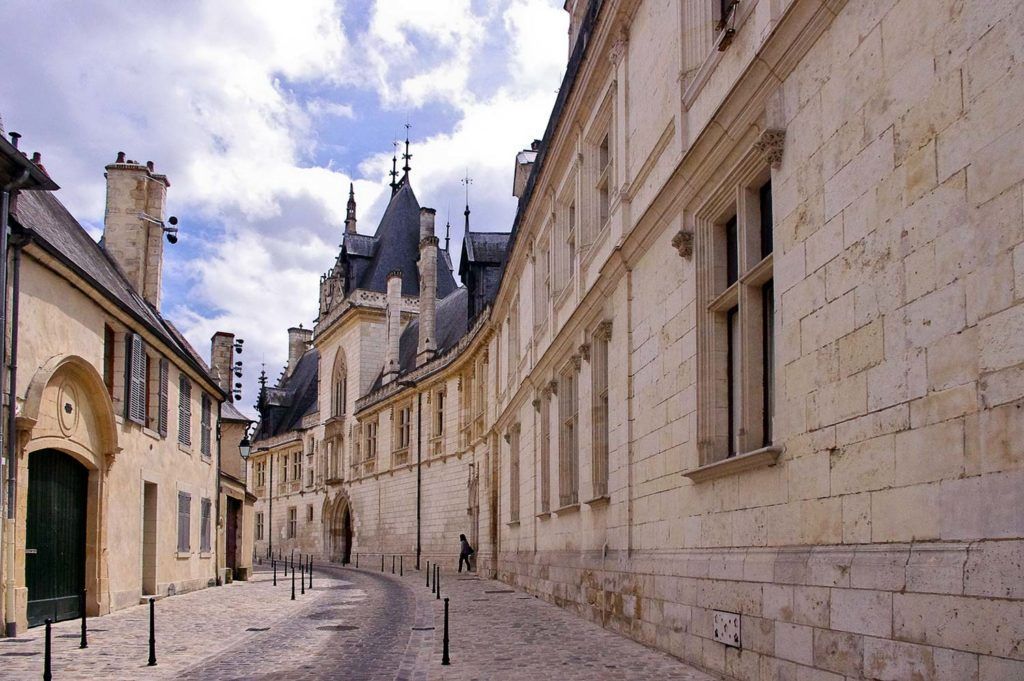 If one can find something that was adopted by the architect from the early Middle Ages, it is the overall structure of the building. Massive walls and towers in the corners close off the courtyard from view, but otherwise there are few similarities. We could say that we are looking at a castle, but not a castle-fortress, but a castle-residence. 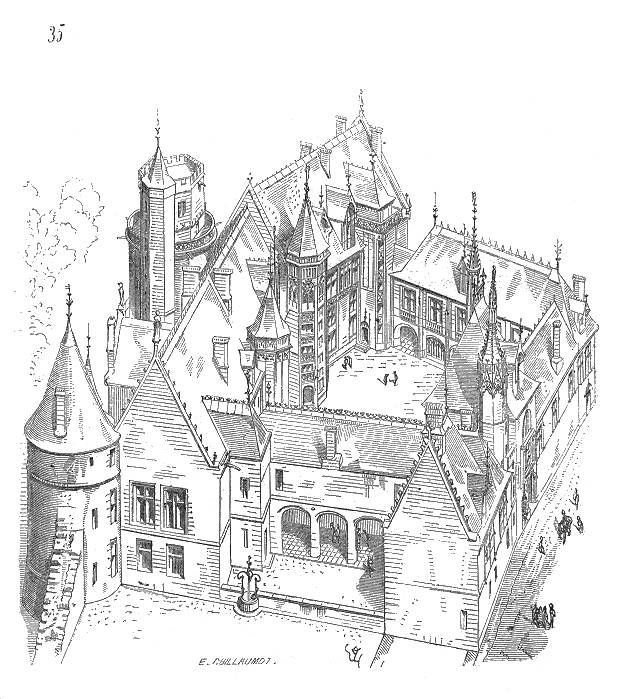 Who was Jacques Coeur? A brief historical background.

The building we are talking about in this article is a family residence, so to understand its exterior and interiors it is important to get, to begin with, at least the most general ideas about the biography of the customer. Especially since there are a lot of symbols in the design of the mansion that are closely related to the life of the owner.

Jacques Ceur lived in 15th century France and was one of the richest people in his country. Like his ancestors, he was involved in trade with Eastern and Arab countries, was an industrialist, and at the end of his life became an adviser and treasurer of King Charles VII. Like many nobles, Coeur spent a large part of his money to build a personal residence, which was to emphasize his status. I must say that he managed to amaze his contemporaries; France had never seen such a building. In all medieval Europe it is impossible to find a similar residential building, given the architectural complexity. For five centuries, the mansion of Coeur has been the architectural jewel of Bourges. 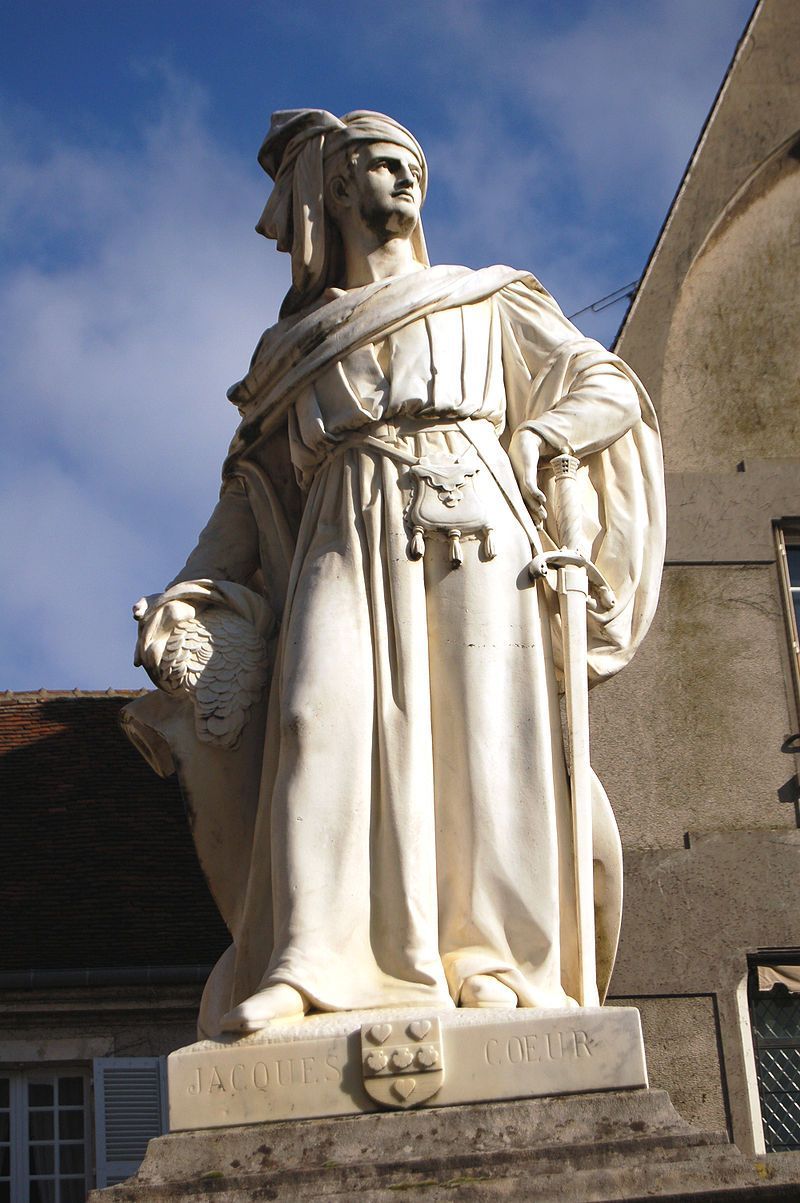 Today, on the square in front of the main entrance to the building is a monument to its owner – a tribute to the memory of the townspeople to their famous compatriot.

Facades of the Palais de Coeur

When comparing the Köhr mansion with similar castle buildings (see Gothic castles of the Middle Ages), the much more detailed elaboration of the facade strikes the eye. Most of the secular buildings of that time had a very modest decoration, here we see numerous bold borrowings of decorative elements from church architecture. All this intricate carving, ornaments, lancet windows and in general an abundance of decorative details were typical only for Gothic cathedrals, but not for residential residences. The architect completely reconsidered all previous approaches to the design of the facade. 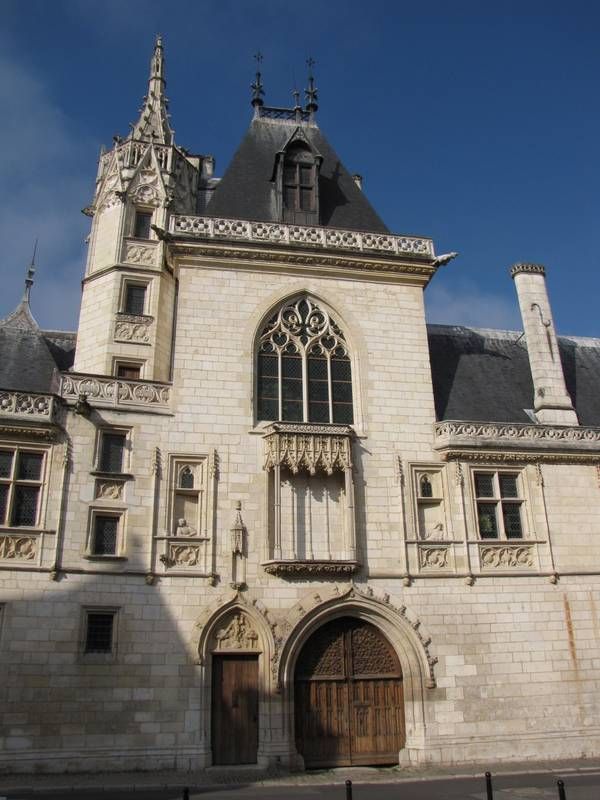 Above the main gate we see a large window, with a rather unconventional masquerading ornament which resembles a heraldic lily. The combination of the lancet window with the usual rectangular openings also draws attention. 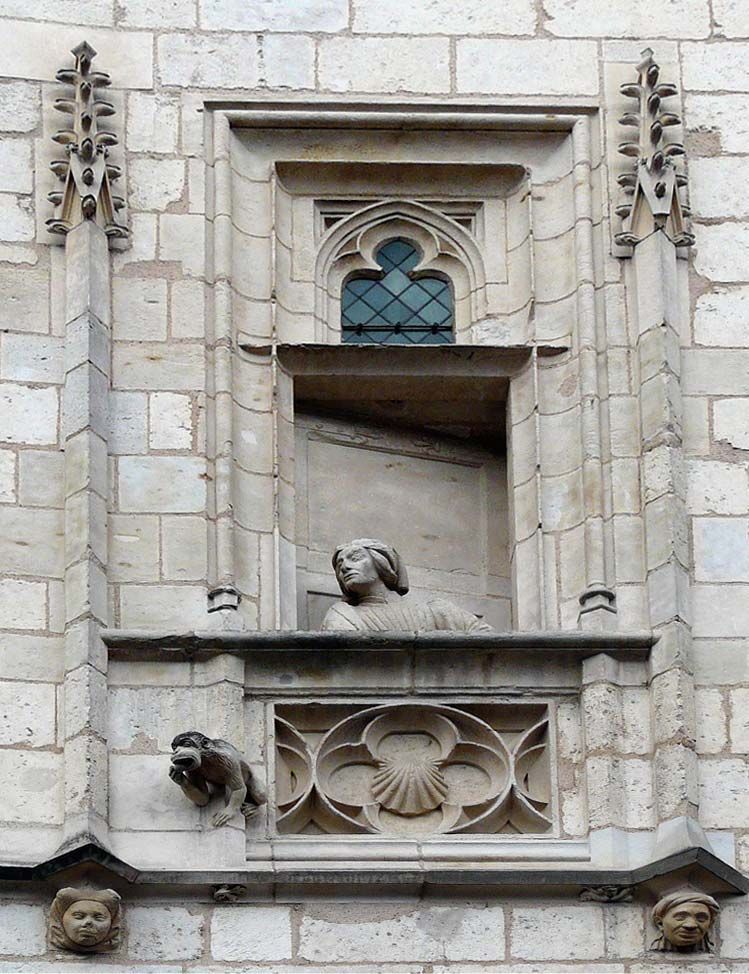 In order to diversify the main façade, the architect has provided two false windows with sculptures – another rare trick in architecture. 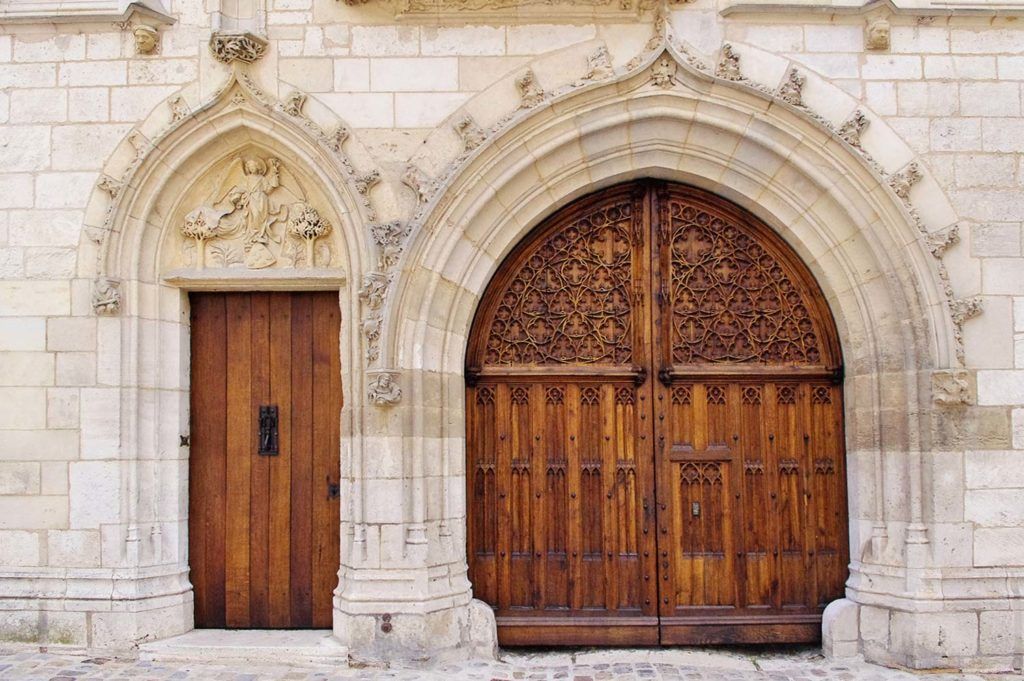 Above the entrance to the central tower we can see a relief depicting palm trees and an orange tree (see large photo with bas-relief) – a hint of trade relations with the Levant, which made the owner fabulously rich. As you can see, in the bas-reliefs and ornaments there are a lot of images with deep symbolic meaning. 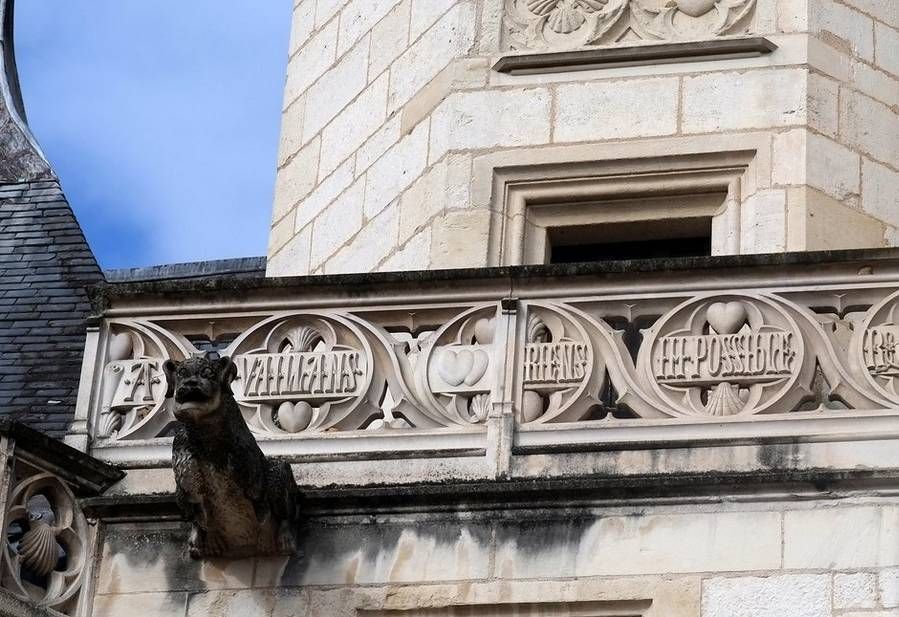 The balustrade ornament (the railing of the upper floor balcony) deserves special attention, depicting shells – the emblems of St. Jacob, the heavenly patron of the owner, next to it are twin hearts – a symbol of a tender marital bond. Woven into the frames of the reliefs are the words “Nothing is impossible for a manly heart,” a motto that evokes a purely Renaissance belief in the limitless possibilities of man.

The interiors of the Palais Jacques Coeur

Regrettably, even the restoration did not do justice to the splendour and splendour of the interiors. The new owners of the castle (after the death of the head of the family) were less concerned about the preservation of historical heritage. Nevertheless, many details of the interior were not so easy to destroy and change, by them we can get a general idea of the uniqueness of the interiors.

Among the large number of rooms, the following deserve special attention: 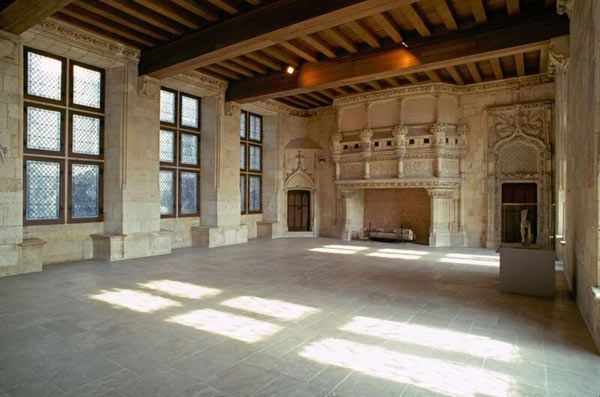 Only a few details have survived from the former luxury of the main hall. The room occupies the entire width of the building and has large rectangular windows, unusual for a Gothic building. The window panes used to be completely decorated with stained glass, but these have been lost without a trace. In the center of the hall the large fireplace, which is more of a Romanesque style, occupies the main place. 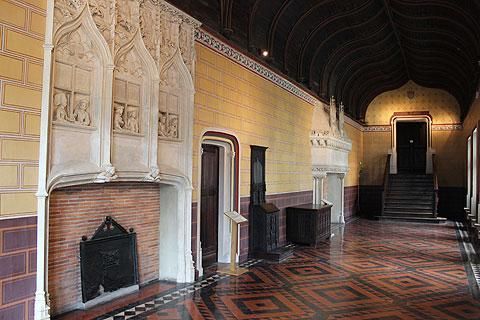 The complex engineering heating systems deserve special attention. There are several dozen fireplaces in the entire building that allow maintaining a room temperature in all rooms at any time of the year. Fireplaces are placed even in the galleries (corridors), which are located on the inner perimeter of the mansion and in this we see again a typical technique of Gothic architecture. 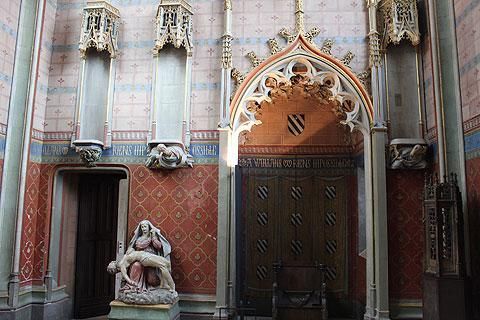 The Chapel is the most beautiful and sumptuous room that the restorers were able to recreate. In our culture, such rooms are called “house churches,” a room for prayer and religious ceremonies. The chapel is in the purely Gothic style, with numerous carved decorative stone ornaments, sculptures, and a sumptuous ceiling with intricate artistic paintings (see below).

Jacques Coeur’s palace in Bourges is one of the most famous examples of Flamboyant Gothic (15th century).

Bourges is located in the center of France, 200 km south of Paris (less than two hours by train). The city is completely unaffected by the wars of the twentieth century (unlike Normandy). Including this building is wonderfully preserved

Jacques Coeur was born in 1400 in Bourges to a merchant family. He was one of the first to trade with the East, bringing spices and furs. After becoming rich and famous, he was appointed treasurer of Charles VII (the royal court was in Bourges at the time). Coeur was accused of abuses (not without reason: he collected salt tax and arbitrarily raised it in his favor, sold silver ingots, stamping them with the royal brand – while the sale of silver was prohibited, etc.), of poisoning the King’s favorite Agnese Sorel, of high treason; he was arrested and taken into custody. He managed to escape to Rome, the Pope appointed him to command the fleet against the Turks. He died on the Greek island of Chios in 1456. The city of Bourges then wanted his body back for reburial, but the grave could not be found.

In the blind windows are figures of Jacques Coeur and his wife. Also throughout the facade are faces of different nationalities with emotions (probably the merchants partners of the owner of the building).

Shells and hearts can be seen throughout the building (a hint of the owner’s name – La coquille Saint-Jacques and Le cœur ).

The servants’ hall (instead of the inscription, it has a sculptural composition – there were few literate people in the 15th century).

A room for feasts.

All details of the fireplace are remarkably well-preserved. Oriental Journeys.

Every hour there are guided tours (in French).

The square in front of the building is named after Jacques Coeur.

The city of Bourges erected a monument to him in 1879.

On the other side, the building is completely unrecognizable because it was built on Roman fortifications.

Did you like the article? Subscribe to the channel to keep up with the most interesting articles.