The Jade Buddha Temple (or Yufosa Temple as it’s more commonly known in China) is the abode of 70 monks in northwest Shanghai, and one of the most popular tourist destinations. The building is not hard to recognize – it is distinguished by the brightness and richness of the yellow color of the walls. The impressive architecture and unique shrines won’t leave any visitor indifferent.

The most commonly cited date for the foundation of the Jade Buddha Temple is 1882, when monk Huigen brought back five statues of Buddha carved from stone of amazing quality given to him in Burma as a gift from a pilgrimage. The holy man decided to keep two of them in Shanghai, and so the temple was built as a place of storage and worship for the sculptures.

In 1911, during the revolution, the complex was completely destroyed, so the present buildings – it’s just a “reproduction”, which was built over 10 years – from 1918 to 1928 – with the donations of believers. It is worth noting that the builders strictly followed all the traditional methods of classical Chinese architecture, so that connoisseurs can fully enjoy the authentic decorations of the Temple of the Jade Buddha.

Since 1983 the Shanghai Institute of Buddhism was opened at the shrine, organizing and conducting all kinds of lectures and seminars designed to teach people about the tenets of the religion.

Description of the Jade Buddha Temple

The Hall of Heavenly Masters, the four Buddhist deities guarding the different sides of the world, greets visitors. In the center of the hall is the smiling statue of Buddha Maitreya, the Teacher of all people, equally revered by the different streams of the great Eastern religion. Also in this hall are statues of the Great Masters and their 32 servants-generals.

READ
Bromo volcano is the most active volcano on the island of Java. Indonesia

After walking through a picturesque courtyard with a pond, one finds oneself at the Great Sage Hall, replete with sculptures of Buddhist deities. Standing out against the others is the pomp and grandeur of the statue of Siddhartha Gautama, the lifetime incarnation of the Great Buddha.

In the Hall of the Lying Buddha is a 96-centimeter jade sculpture depicting the sage in a state of nirvana. It is one of two statues once brought back from Burma. The statue is richly decorated with exquisite gems that have been voluntarily donated by believers from all over the world.

It is noteworthy that the original Lying Buddha is often confused with a four-meter-tall marble replica, which was given to the temple in 1989 by a Buddhist follower from Singapore. Nearby is the Hall of Art, which displays all kinds of original masterpieces of Buddhist masters.

The temple grounds include the Sutra Reading Hall (a room for studying the basic texts of Buddhism), the Inner Contemplation Hall (a room for meditation), and the monks’ living quarters. There is also a small restaurant where you can enjoy traditional Buddhist food and taste delicious tea.

Tourists should know that as a sign of respect for the main shrine of the temple – the Statue of the Jade Buddha – to photograph it is strictly prohibited. But everyone can tie a red ribbon on a tree in the garden of the temple. It is believed that Buddha hears all our wishes and will definitely fulfill them, each ribbon is someone’s wish, already fulfilled or waiting for its turn.

The Jade Buddha Temple is located at 170 Anyuan Road, Putuo District, Shanghai. You can get there by subway (Changshou Road Station), but you’ll need to arm yourself with a map and walk around the colorful streets of the city for about 15-20 minutes. An alternative is to take a cab, which is relatively inexpensive in Shanghai.

The temple doors are open to tourists daily from 8 a.m. to 5 p.m., not counting major holidays when the monks retreat to perform traditional religious rituals. The cost of a visit is 20 yuan (approximately 240 rubles), but for an excursion to the Jade Buddha House extra 10 yuan will have to be paid.

The Jade Buddha Temple is a venerable and famous Buddhist temple in Shanghai. Like most modern temples in China, this temple combines two currents of the Buddhist religion. These are the Pure Land tradition, and the Chan tradition of Mahayana Buddhism. 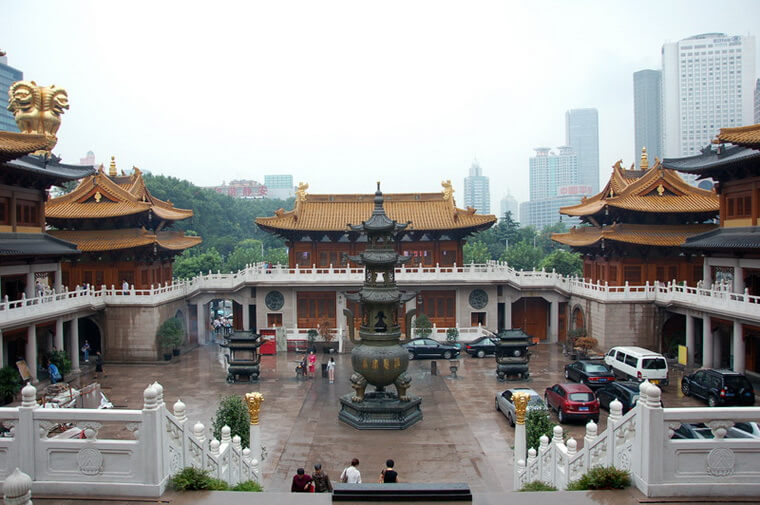 Two precious jade Buddha statues have become the main shrines of the temple. They are not only rare cultural relics, but also beautiful works of art. Both the Sitting Buddha and the Lying Buddha are carved from solid white jade.

The sparkling and crystal clear white jade gives the Buddhas the beauty of holiness and makes them more vivid.

The seated Buddha is 195 centimeters tall and covered in agate and emerald, depicting the Buddha in his moment of meditation and enlightenment. 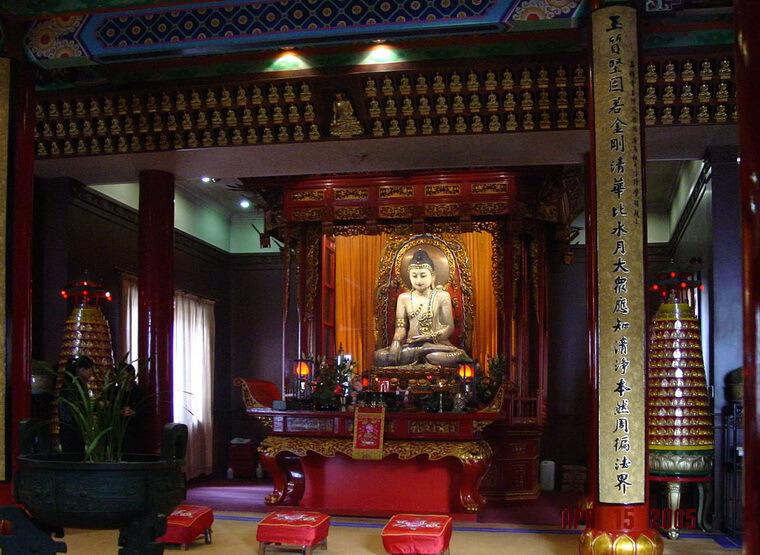 The reclining Buddha is only 96 centimeters long. He lies on his right side with his right hand supporting his head and his left hand on his left leg, a shape called “happy rest”. The peaceful face shows the peaceful mood of Shakyamuni when he left this world.

You will find the Jade Buddha Temple on the west side of Shanghai, just 5 kilometers west of the legendary East Pearl Tower. The address is No 170, Anyuan Road, Putuo District. Geographic coordinates 31.241350, 121.445218

READ
The Churaumi Oceanarium, home to the largest fish in the world 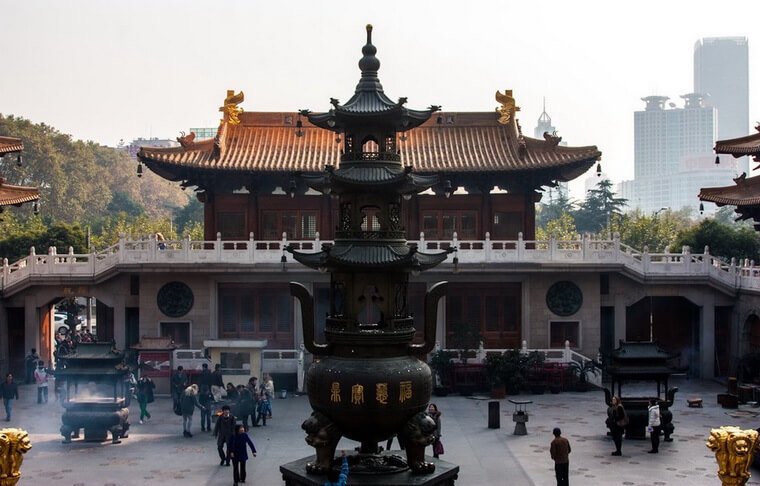 History of the temple

The temple was originally founded here in 1882. At that time, two jade sculptures of Buddha were brought here from Burma. Recall that is a large statue of the sitting Buddha (its height 1.95 meters and weighs 3 tons), and a small statue of the reclining Buddha (the so-called parinirvana Buddha). 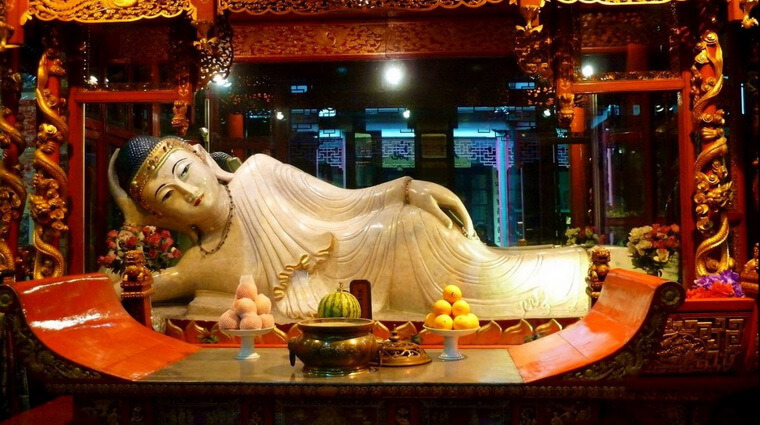 This particular statue is thought to be the original, but in fact it was made later with donations from Singapore

Who brought the statues and when

At the beginning of the 20th century, monk Hui Gen went on a pilgrimage to Tibet. From there he went to Burma, where Chen Junpu, an immigrant from China, gives him five statues of Buddha made of jade. Two of them are brought to Shanghai by Hui Gen. The monk then uses the donations to build a temple for them. Unfortunately, he passed away soon afterwards.

In 1911, during the uprising, the temple was destroyed, but the statues were saved. In 1918-28 a new temple was built for them. 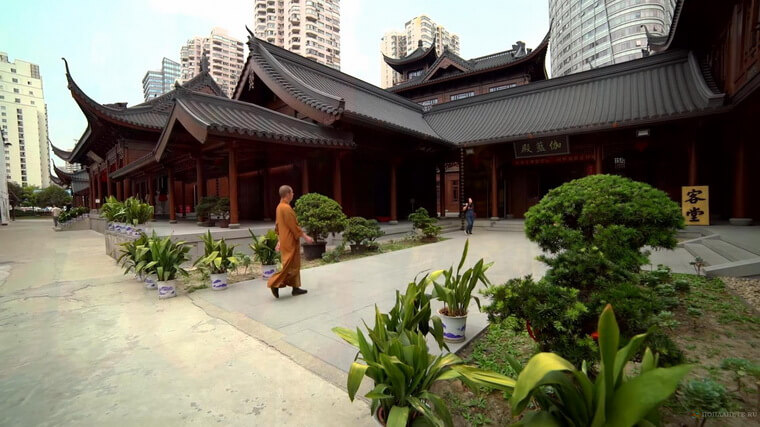 Significant dates of the temple

An interesting fact is that in 1966 (during the Cultural Revolution), despite their religiosity, the monks were making a living by selling their handicrafts

What’s inside the Jade Buddha Temple

The Hall of the Four Heavenly Kings

Here you will see statues of Maitreya, Skanda and the Four Heavenly Kings themselves. According to Chinese mythology, each of the Heavenly Kings is called upon to oversee one of the geographical directions north, south, west and east. The room is located in the southern part of the temple.

In this hall you will see many statues, among them:

Three Golden Buddhas. The central sculpture is the Buddha, with Amitabha on the left and Bhaisajyaguru on the right

It is located on the second floor at the north end of the temple. There is a charge of 10 yuan to enter it.

On the second level of the eastern part of the temple, there is a small restaurant with its own entrance from the street. It is open daily and offers a wide variety of noodle dishes for 5 yuan per bowl. The most popular dish is the “double mushroom noodle”.

The temple also has a private restaurant for monks and temple volunteers. It is located on the west side of the temple complex. There is a visitor services office and a Buddhist library near the south entrance.

How to get to the Jade Buddha Temple

The Jade Buddha Temple is a great place to visit, whether you are a Buddhist or not. The quiet peaceful atmosphere creates an outlet in our busy modern society. 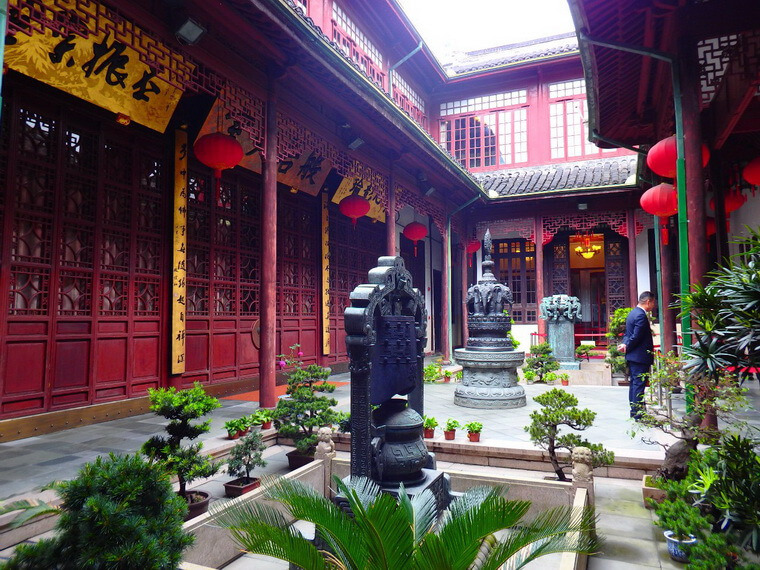 The interior of the Jade Buddha Temple