Jellyfish Lake is a small lake, the highlight of the Rock Islands archipelago in Palau. At first glance – an ordinary lake, but worth diving under the water, one enters another world, a world of royal tranquility, peace, it seems that nature is here to meditate.

Lake Jellyfish is located at the eastern end of the islet of Ail-Mulk. This is a relatively small lake, which measures 460 by 160 meters. The water in the lake is brackish, which is natural, because the lake is separated from the ocean by a small strip of land, only 200 meters. The depth of the lake is 50 meters, but this was enough to form in it a stunning world that attracts divers from all over the world – the kingdom of jellyfish.

The uniqueness of the lake

More than 15,000 years ago, tectonic shifts caused coral reefs to gradually rise from the bottom, forming bizarre coral mazes above the water’s surface. At the same time, a large rock collapsed and its boulders fell into the water, cutting off part of the ocean. Thus more than 70 small lakes were formed, separated by small patches of land. A few jellyfish ended up in these new bodies of water. Since the jellyfish had no enemies in them, their numbers grew; in the process of evolution, the inhabitants of these waters lost their sting cells and became completely harmless. This fact attracts a huge number of tourists wishing to “hang out” with jellyfish in the depths.

READ
Where are the Canary Islands, weather by month

These jellyfish do not reach large sizes. Their maximum size is equal to a soccer ball, and their minimum size is a cherry.

Since jellyfish need oxygen they try to live in the upper layer of water, but this does not prevent them from making frequent migrations every day both horizontally and vertically, often descending to the border of the oxygen-free water layer. It is safe to say that migrations of golden jellyfish are performed with a particular orderliness and rhythm. All night and until lunchtime, jellyfish rise and fall in the upper layer of water to absorb nutrients from it. When morning comes, they move from the western part of the lake to its eastern part, and in the afternoon they gather again on the western side of the lake. When they are swimming near the surface, they rotate counterclockwise to keep the algae living in their bodies in perfect light, and the algae turn the sun’s energy into sugar through photosynthesis, which they then feed on.

Lunar jellyfish also move like the golden jellyfish, but not as organized, although we can say that their pulsation in the lake, too, is massive. At night, lunar jellyfish catch paddlefish near the surface of the water, which make up most of their diet in the lake.

Some biologists have suggested that the jellyfish migration between the eastern and western parts of the lake is related to the actinids Entacmaea medusivora, which feed on jellyfish. These actinids live near the eastern shore of the lake. The jellyfish try to avoid shade and stay in the light. By following as much light as possible, they are better able to avoid encounters with actinia that are dangerous to them.

In 1998, Jellyfish Lake was almost completely lost its main inhabitants – the golden jellyfish. By December 1998, their numbers in the lake had dropped to almost zero. It is believed that this dramatic population decline was due to the effects of a powerful phase of the El Niño phenomenon, during which huge masses of warm water are redistributed near the surface layer of the ocean.

As a result of El Niño, the water temperature in the lake increased greatly, which killed the symbiotic algae, without which the jellyfish cannot survive. In 1999, no golden jellyfish could be found in the lake, but in January 2000 they began to appear again, and today their numbers have completely recovered.

The picturesque clusters of jellyfish attract many tourists and scuba divers to the lake. It is quite safe to swim among lake jellyfish, as they have almost completely lost their ability to “bite”. But still people with sensitive skin or suffering from allergies are advised to wear protective suits when diving. Diving in Jellyfish Lake is allowed only with mask and snorkel, and scuba diving is prohibited.

Scuba tanks are prohibited for two reasons: first, the air bubbles from the scuba tank get under the dome of jellyfish, which can kill them; secondly, scuba allows a person to dive to a depth of more than 15 meters, where there is an oxygen-free layer.

Massive diving into the lower layer of the lake will certainly cause mixing of the upper and lower layers of water (which never happens in natural conditions), and the entire ecosystem of the lake will be irrevocably damaged, which is fraught with death for all its inhabitants. In addition, a careless diver can himself get deadly poisoning through the skin, being in the lower layer of water, saturated with hydrogen sulfide and ammonia.

Of all the lake’s inhabitants, the only real danger to tourists can be posed by combed crocodiles. But they themselves prefer to stay away from people, and only one fatal attack has ever been recorded. 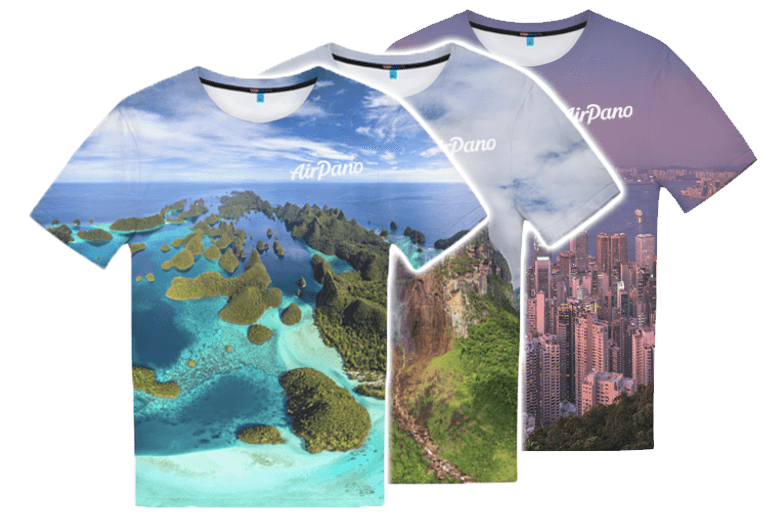 A unique offer for AirPano fans. Now you can order a T-shirt with your favorite panorama!

In the Pacific Ocean, 800 km east of the Philippines and 1000 km north of New Guinea, lies the Republic of Palau, a state consisting of three hundred islands, mostly uninhabited. One of them is world-famous: Ail Malc, part of the Chelbaheb (Rocky Islands) archipelago.

The coral island, about 6 km long and 4.5 km wide, is densely covered with forest, and on this small area there are 10 lakes. Although they are connected to the ocean through cracks in the limestone, the outside world has not had much influence on them, and a unique ecosystem has formed here. As a result, jellyfish began to reign in one of the lakes – there is no analogue in terms of their number on the planet. 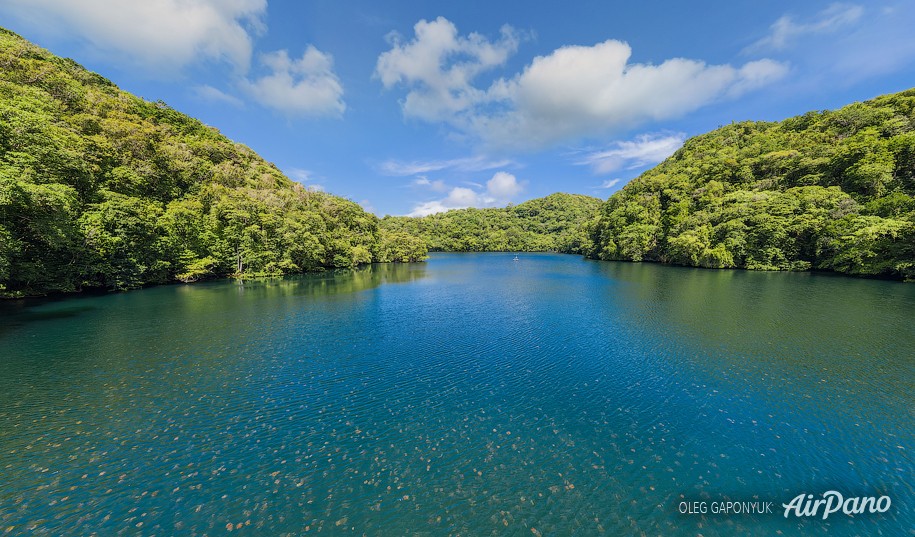 The water body appeared about 12,000 to 15,000 years ago. Its first inhabitants were brought by the sea, but then its isolated position led to a special path of development. There are only two species of jellyfish in the lake: the golden (lat. Mastigias papua) and the lunar, or eared (lat. Aurelia aurita), but they differ from their counterparts that inhabit other bodies of water in the world and even neighboring lagoons. Biologists classify them as separate subspecies and continue to study them to this day. 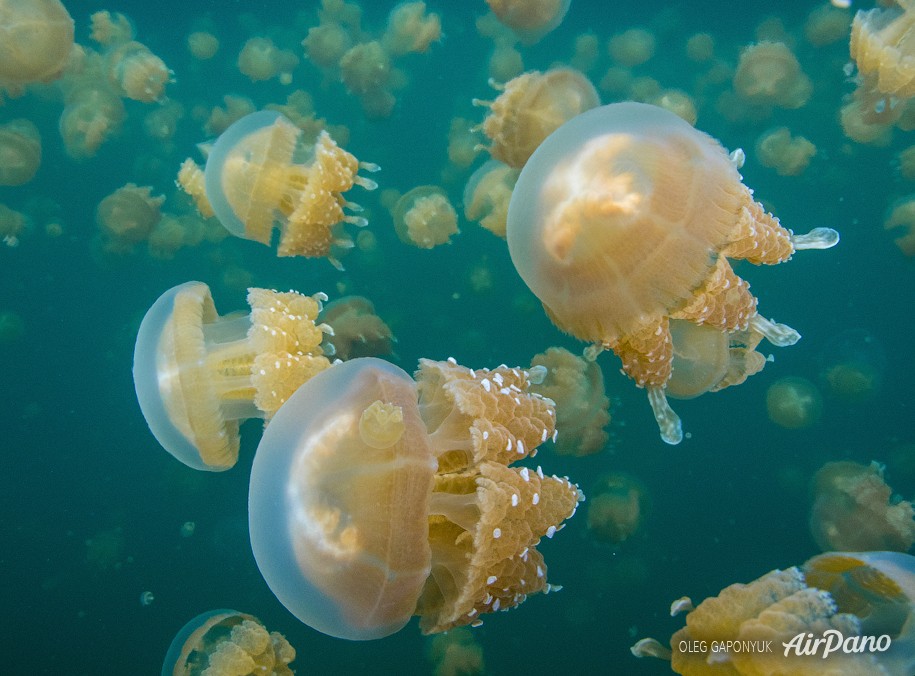 Golden jellyfish have a very unusual shape: a bell with four tentacles. A multitude of bright yellow jellyfish of varying sizes, filling the waters of a small lake, as if to change the color of its water. Aurelia, on the other hand, is transparent – but it has an atypical life cycle: instead of aging, lunar jellyfish can eventually return to polyp state. There is only one such “immortal” jellyfish in the world – Turritopsis dohrnii.

READ
Navagio is an isolated bay of the island of Zakynthos. Greece 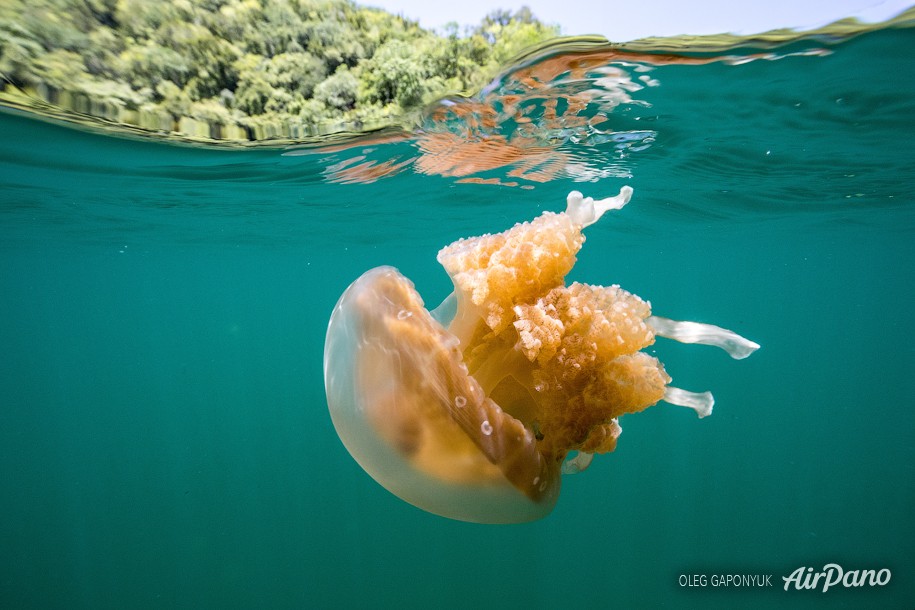 The inhabitants of Lake Jellyfish live only in its upper layers: at the bottom they lack oxygen. And they make daily migrations: in the early morning these animals move from the center of the western basin to the east, in the afternoon they swim back to the west, and at sunset they go back to the east, where they stay all night. As they move, they rotate counterclockwise. All these efforts are not in vain: this is how jellyfish get nutrients from the water, hunt for zooplankton, and ensure equal exposure to the sun’s rays.

Lunar jellyfish have the opposite lifestyle, rising to the surface of the water only at night, when their prey, the crustaceans, rushes there as well. For this reason, Aurelia is not caught on camera lenses, and the heroes of Lake Jellyfish photography are mostly its “golden inhabitants”.

Their exact number is impossible to calculate: according to rough estimates, about two million! This is what makes the body of water famous. And another interesting feature of the golden jellyfish of Aile-Mulk Island is their complete harmlessness. An encounter with an ordinary jellyfish for a human most often ends with a burn: these marine animals, defending themselves, release from their tentacles a poisonous scalding substance. But here jellyfish have no natural enemies, and over thousands of years of quiet life they have lost their defensive abilities. The concentration of toxins has been reduced to a minimum, and only if you accidentally touch the jellyfish with a sensitive part of your skin – for example, with your lips – you can feel a slight burning. Therefore, they can safely pick up and swim near them. 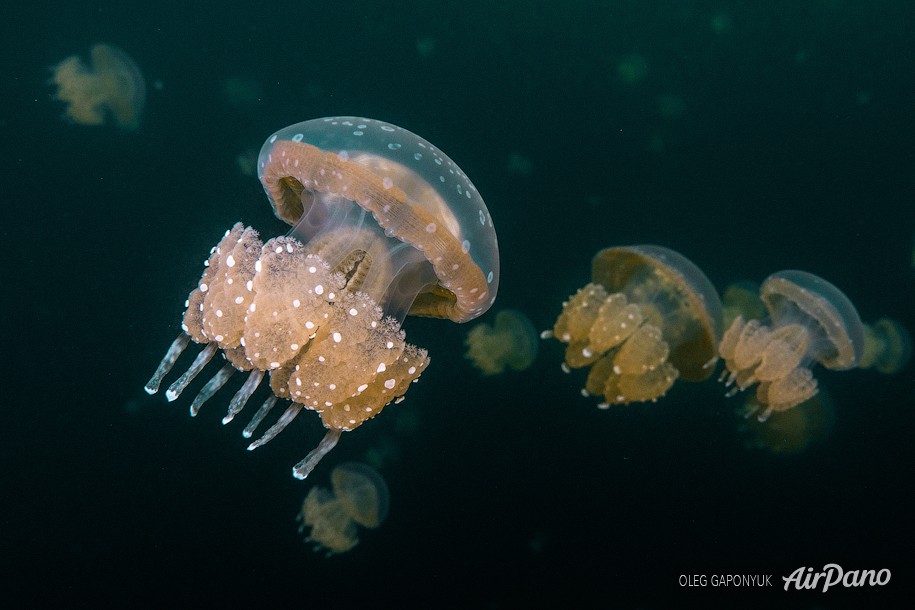 But the swimmer awaits another potential danger. The fact is that the water in the Jellyfish Lake is divided into two layers. The upper layer is saturated with oxygen, and it is there where its inhabitants live, and at 10-15 meters oxygen content is reduced to almost zero, but there are huge concentrations of hydrogen sulfide, phosphorus and ammonia. Only rare extreme bacteria can survive in this toxic environment, and people should not dive so deep: toxic substances will enter the body through the skin, leading to serious health problems. Fortunately, the two such different layers do not mix, and at the surface of the water all living organisms feel well.

READ
Valaam Island and its sights 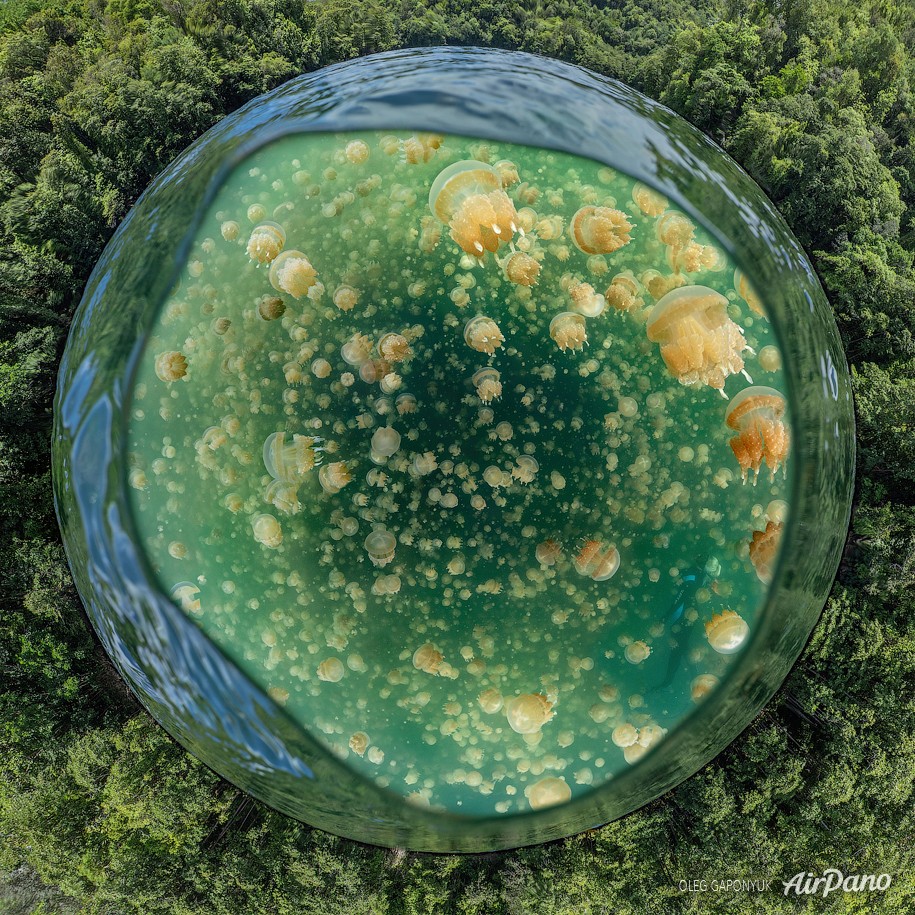 This is why so many visitors come to the island: to swim in the amazing lake among the “soup”, a dense mass of jelly-like creatures is an incredible experience. Take an unusual “bath” with AirPano Panoramas!