Jewish Museum of Tolerance in Moscow

Telegram-channel about everything that is happening at the Jewish Museum and Tolerance Center. To contact: pr@jewish-museum.ru with “telegram”.

This is the sound check of Echo, a guest of the New Israeli Sound festival from Tel Aviv. The show is tonight, at 9:30 pm.

Tickets are available online and at the museum box office. Today, enter the museum through the exit (around the corner to the left of the main entrance).

On September 4 at the Jewish Museum and Tolerance Center we invite everyone to immerse themselves in the atmosphere of hot Tel Aviv together with the New Israeli Sound festival! For a fun and loud summer, we’ve called in the star of New Israeli Sound 2019, hip-hop singer Echo…

Another snippet of Echo’s soundcheck – see you tonight.

And from 15:00 there is a market of local brands, kosher foodcorners, Rishon Cafe foodtrack, a game zone with Ping Tablet, and DJ sets “Power of Vinyl” playing in the museum courtyard.

The Moscow-based indie band will take the stage at 8 p.m. You can still buy a ticket and join the big party until then.

Monday, September 5 through Friday, September 9, for 1st and 2nd graders: an After school program from 12:00 to 6:00 p.m. with lunch and an afternoon snack. Sign up: https://bit.ly/3KPgKWH

Friday, September 9 – learn the secrets of the king piece at the chess club: https://bit.ly/3AN7eyS

And a little bit about Mendit Research Lab, who are partnering with the workshops. Mendit Research Lab is a community of researchers of clothing practices, fashion and conscious consumption. The members of the collective are united by a passion for mendig (mend – to mend, to mend)…

Looking for a home: a textile collage with Mendit Research Lab On Wednesday, September 7th , we will continue to explore how different a home can be, just like at the exhibition “The Sense of Home”. And we’ll use magazine clippings and textiles to help us do just that.

Together with the members of the Mendit Research Lab community, we will try to speculate what other “dwellings” are adjacent to the human home – a garage, a nest, a booth, a beehive, a kibitz, a mailbox, a mobile home, a florarium, and others. Who could live in them? We will look for the answer through collages of newspaper and magazine clippings and textiles, which will reflect the idea of inhabiting and repairing an unfamiliar dwelling – another house with its own rhythm.

The moderator is Daria Gorbatsevich, culturologist, researcher of ballet theater and dance, graduate student at the National Research University Higher School of Economics. 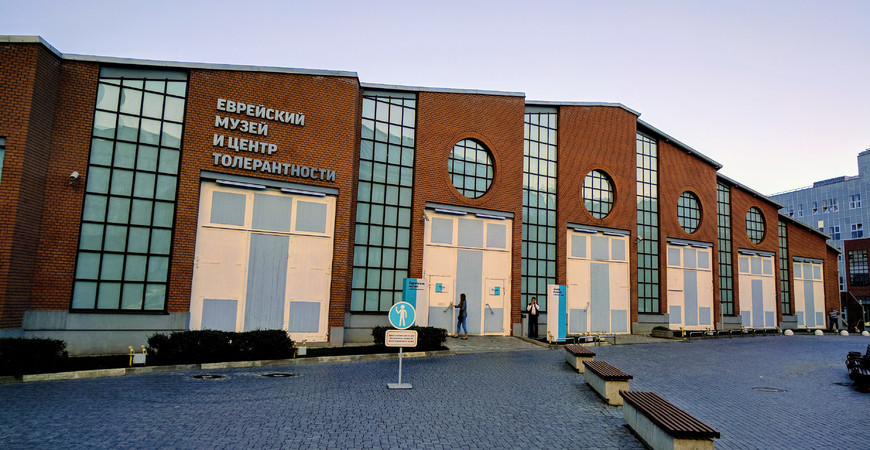 The complex of the Jewish Museum and Tolerance Center, opened in 2012, is located in a historical building – a monument of the Soviet avant-garde – the Bakhmetev garage (built in 1925-1927 by the architect Konstantin Melnikov and engineer Vladimir Shukhov).

The museum site is new and technologically advanced, designed for the widest possible audience. Visitors can not only see historical artifacts related to Jewish culture but also get information in an interactive multimedia form. In particular, the museum has a movie theater, where historical and educational films are shown. An interactive map of migration is freely available.

The Jewish Museum and Tolerance Center is the world’s largest Jewish museum and the largest indoor exhibition space in Europe. The exposition is located on an area of about 4,500 square meters, while the total area of the cultural and educational complex is 8,500 square meters. Most of the exposition is successively presented in the halls, related to the history of Jewish life in Russia since the late XIX century.

The Center for Tolerance offers thematic trainings, seminars, expert lectures, as well as workshops and roundtables, and surveys on tolerance.

By the way, in 2016 the Tolerance Center of the Jewish Museum won the UNESCO prize for the dissemination of ideas of tolerance and non-violence.

The museum’s exhibition is divided into thematic zones-segments that include letters, documents, photographs, telling about the life of Jewish people in Russia from the late 19th century to the present day.

If you are going to visit the museum, you should set aside a whole day to study it.

Ticket prices for the Jewish Museum and Tolerance Center in Moscow

Tickets for the museum tour can be purchased at the ticket offices and online. There are basic and preferential rates. Preferential applies to children aged 7-17, schoolchildren, students and pensioners. Free tickets for children under 6 years old, as well as veterans of WWII, disabled, servicemen and orphans.

Entrance to the museum is from the side of Novosushchevsky Lane, where on both sides of the road there are ground transportation stops “Obraztsov Street”: buses, streetcars and buses stop there.

The nearest metro station is “Maryina Roscha” Lyublinsko-Dmitrovskaya line, about a kilometer from the Jewish Museum. There is no suitable transport on this section of land route, but from the subway can be reached on foot in an average of 10-15 minutes.

You can also get to the museum from the metro station “Novoslobodskaya” of the Ring Line. From here you will need to take a streetcar № 19 or a fixed-route cab № 444 m or 119 m to the stop “Obraztsova Street”.

The easiest way to get to the museum by car is from the Third Transport Ring Road. You should turn off near Suschevsky Val to Obraztsova Street, drive about 500 meters, and then turn into Novosuschevsky Lane.

You can also take a cab to the museum. You can order a car via Uber or Yandex. Cab on your smartphone. Or you can use the services of one of Moscow’s cab companies (for example, “Veset” or “Cheap” cab).