Jigokudani is a sanctuary for snow monkeys. Japan

In summer, people prefer to bask in warm bodies of water (preferably in the sea-oceans), and in winter in comfortable spas. How are our little brothers worse? Monkeys – one of our closest relatives, by genome, and to some extent by development – are also not lagging behind humans and love to take baths. For example, in Japan there is a unique reserve Jigokudani.

The main feature of this place is a monkey spa resort. In the truest sense of the word. The fact that the area here is abundant in geothermal springs, which are so beloved by Japanese macaques. 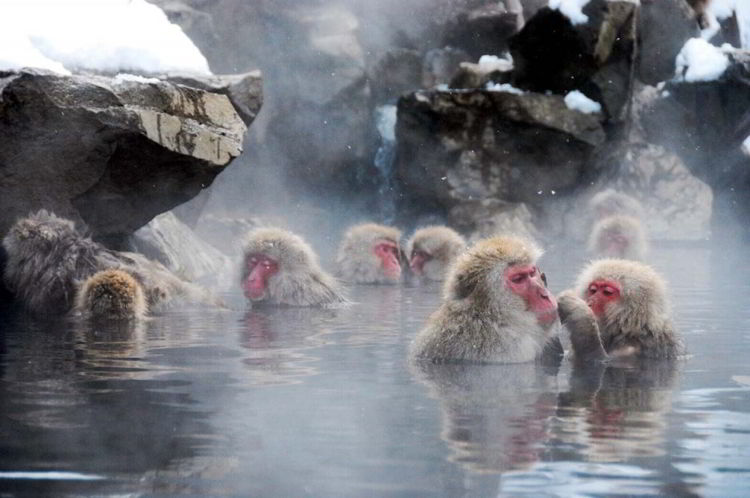 Jigokudani is located about 25 kilometers east of Nagano on Honshu, the largest island in the Japanese archipelago.

Jigokudani on a map

Jigokudani is located in Yoshinetsu Kogen National Park (original Joshinetsu Kogen) in the Yokoyu River Valley at an elevation of about 850 meters.

The park is home to a large group of Japanese macaques, also called “snow monkeys”. The animals behave quite originally – in addition to traditional monkey business, they like to sit for hours in natural pools of warm water from geothermal springs.

They do this not because of any instinct, but because they banal like it. Look at the photo – it’s just an expression of endless bliss. Usually monkeys visit their spa pool with their whole families. 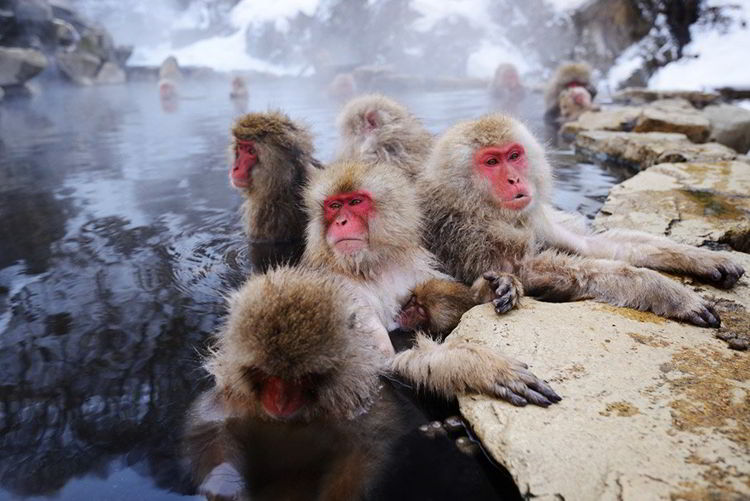 If Jigokudani is a snow monkey park, Bali has its own whole monkey forest. Do you love these fun animals? Be sure to visit, or at least read about the Monkey Forest in Indonesia.

It is officially believed that macaques have been taking baths here since 1963. It is claimed that the pioneer into the world of spa relaxation was one enterprising female. She spotted the beans in the water and climbed for them. But she liked the process of staying in the warm geothermal waters better than gathering food. A little later her congeners began to join her, gradually elevating bathing procedures to a cult. It is now one of the monkeys’ favorite pastimes. The park itself opened in 1964.

The macaques open their “beach season” … in winter. It lasts from November to March. During this time, Jigokudani Park is filled with primates of the monkey genus and the human genus. Some come to see the others. It is during this time that the monkeys come down from the nearby forests to bask in the warm springs. And people flock from all over the world to watch the monkeys basking in the warm springs. Macaques have long been accustomed to the intrusive tourists and practically do not pay attention to them. 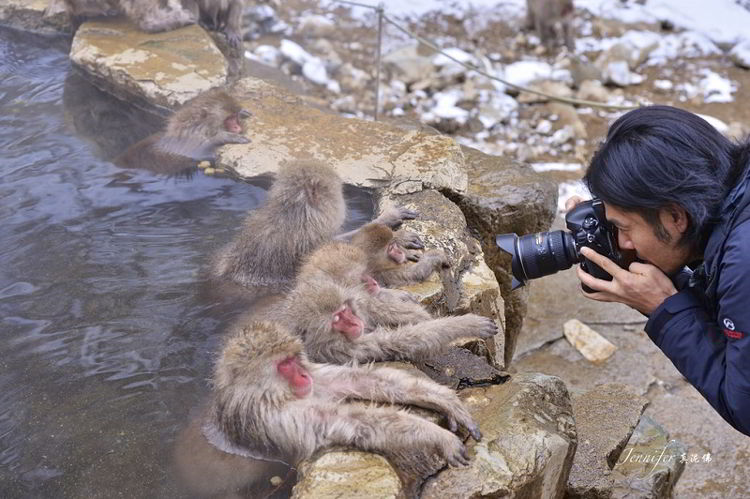 But still do not forget that monkeys are wild animals. Do not tease them, make sudden movements and provoke. Even looking monkeys in the eye is not allowed – it is perceived by the animals as aggression – you can get at best a slap. Park management strongly requests not to approach, feed, pet or annoy the monkeys. Although video and photography are allowed (again, if basic rules of conduct are followed). There are no fences on Jigokudani territory. The environment is as natural as possible.

It’s interesting to watch the monkeys completely relax and go into a trance. They snuggle up to each other, blissfully squinting their eyes – idyllic, indeed. 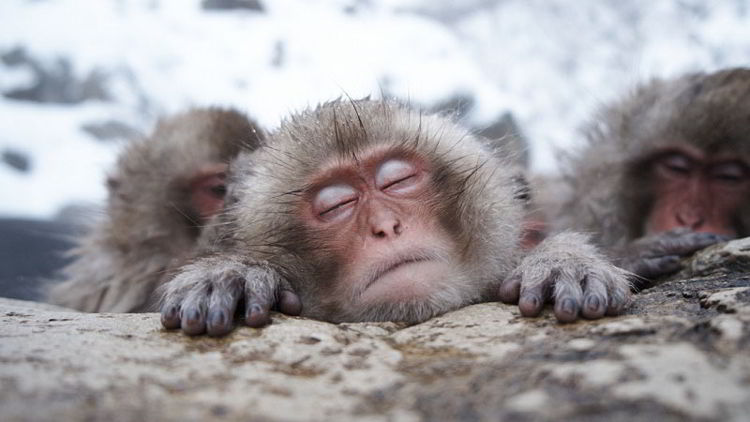 By the way, do you want to feel what these monkeys feel? Then you go to Iceland to the famous open-air spa resort Blue Lagoon.

Japanese monkeys are called snow monkeys for a reason. It is the most frost-resistant and northern species of monkey. They can tolerate cold weather down to -15C or even lower. Monkeys’ fur is gray-brown and very thick. It keeps them warm in the winter cold.

It is worth noting that the monkeys do not sit in the pools 24 hours a day and not all year round. In the fall, spring and summer they live in the high mountain forests. There they also like to swim in small ponds, but for the purpose of refreshment. 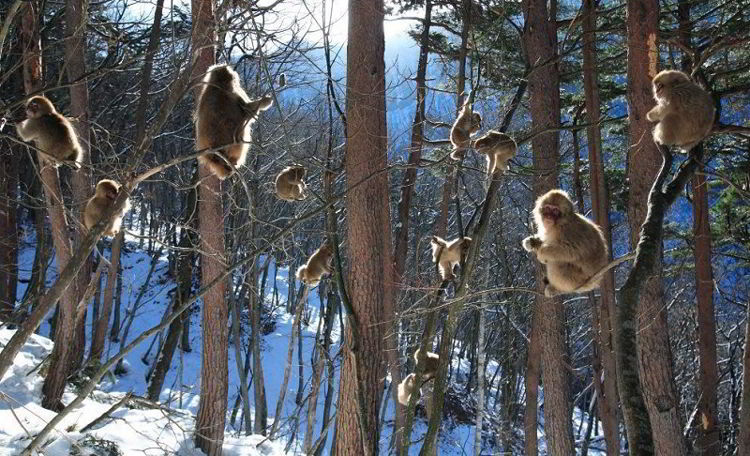 Even in winter, macaques leave the pools in the evenings and go into the forest. Monkeys are very clever creatures, they get out of the water in the afternoon, when the air is maximum warm and you can safely dry off. Interesting process of “drying” – congeners rummage in each other’s hair as if in search of fleas. But in fact, this way they express their love, and the coat dries faster. As dusk falls, the macaques go back into the forest.

People have noticed another unique thing. When the monkeys leave the water and go for food, they quickly freeze in the cold. If they have not dried out well before, their fur is covered with ice. To avoid this, the primates have organized a peculiar scheme of duty – monkeys with dry hair bring food to their relaxing congeners. Once again we are convinced that everything in nature is thought out in detail. 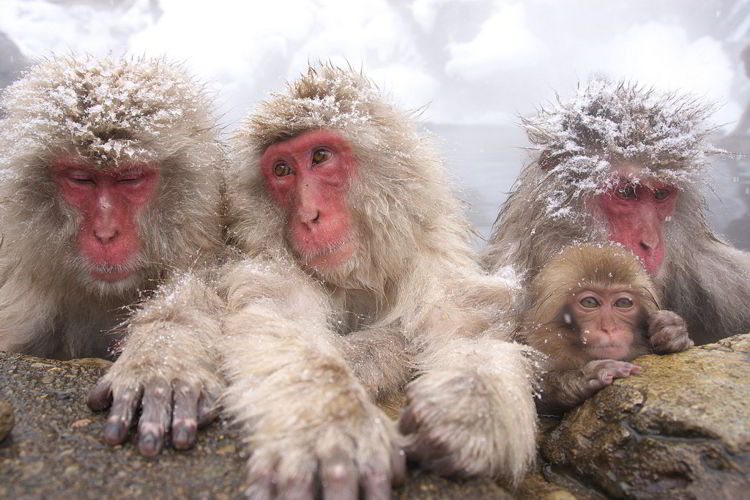 In winter the reserve is open from 9 a.m. to 4 p.m. From April to October from 8-30 am to 5 pm. There are no weekends in the park officially, but at the decision of the administration, the entrance to Jigokudani may be closed without warning. This is usually due to bad weather conditions.

There is a fee to enter the park. Admission for adults is $4. For children it is $2. Kids under 5 years old visit the park for free.

The way to the reserve is a little bit difficult – about 2 kilometers on foot along the narrow path through the woods and mountains at a height of 850 meters. Sometimes there are heavy snowfalls, and then the road becomes even more difficult. But, for the sake of contemplation of the amazing place, it is simply necessary to pass it.

READ
Bangkok sights. What to see in Bangkok.

The park’s name, which translates to “Hell Valley,” comes from the area’s abundance of hot thermal springs and geysers gushing from underground. The place is truly impressive, especially in the winter season, when the thick steam rises over the hot springs, shrouding the steep cliffs and surrounding forest in a haze.

The uniqueness of these places is appreciated not only by tourists around the world, but also by the local old-timers – Japanese macaques (better known as snow monkeys), which are firmly established on the fertile springs.

Opened in 1964, Jigokudani Park is considered the largest snow monkey reservation on the planet. The reserve, located in the scenic mountains of Honshu Island, is now home to about 160 Japanese macaques (lat. Macaca fuscata). They are the most frost-resistant primates in the world, capable of surviving temperatures below -15°C.

In a harsh climate where the average winter temperature is -5°C and snow cover lasts up to four months of the year, the monkeys bask in natural thermal springs, taking hot water treatments. The steam rising from the water warms the animals, who prefer to spend most of the day in natural pools.

According to the theory, macaques first learned to warm themselves in hot pools relatively recently, only since 1963. What’s more, the name of the savviest monkey is known – it was a young female nicknamed Mukubili, who once climbed into a pond to collect fallen beans. As a result, only a few years later, the entire flock of monkeys to which Mukubili belonged could already be seen sitting in the hot springs of Hell’s Valley.

In severe frosts, macaques sit completely submerged in bodies of water, with only their fluffy slightly snow-covered faces sticking out above the water.

The monkeys’ thick, grayish-brown fur, which nature has given them, also helps them survive the freezing temperatures. The wool covers the entire body of the animal, with the exception of the muzzle, paws and buttocks. In addition, one of the distinguishing features of the snow monkey’s appearance is its red skin.

A stooped macaque seems quite well-fed and heavy, but this is a false impression. In reality, snow monkeys are not large at all: large males are 80-100 centimeters tall and weigh 12 – 14 kilograms.

Macaques eat mostly plant food – leaves, tree fruits, roots, sometimes insects and bird eggs. They spend a lot of time grooming (combing the hair), making sure that the individuals closest to the alpha male take a bath out of turn. The leader has also the right to stop a guilty animal from bathing.

There is also a system of “duty” in the pack: while some macaques are taking baths, others are obliged to bring them food. Of course, the hierarchy is respected. Such an idea did not spring up by chance, as a wet monkey gets covered with ice in a blink of an eye and this leads to even greater freezing. So while some of the monkeys bask in the pond and wait for the weather to clear, other animals with dry coats ensure that the bathers get their provisions.

The information center at Jigokudani Park features photos not only of all the alpha males formerly in command of the pack, but also of the leader currently holding that status.

You can watch the snow monkeys at arm’s length: the springs have no fences, and the apes have become so accustomed to close proximity to humans that they are not afraid to approach visitors up close.

Despite this, the park administration warns visitors not to try to pet animals or stare into their eyes, as these actions can be regarded by monkeys as a sign of hostility. Feeding the primates, as well as teasing them with food in Jigokudani Park, is strictly prohibited.

The best time to visit the monkey resort is from November to March. In summer, monkeys are not as eager to take hot baths, which is not surprising.

In Jigokudani Park, you can watch wild Japanese macaques in their natural habitat and take unusual photos of snow monkeys basking in natural hot springs.