John Lennon Wall in Prague – a symbol of love and freedom

The John Lennon Wall in Prague is a landmark that is part of my walking itinerary #2 in the Malo Strana district . It is very easy to visit it even off-trail: it is located only 180 meters from the main landmark of the city – Charles Bridge .

John Lennon Wall in Prague. The wall has the most young people.

Lennon’s wall in Prague is something like Tsoi’s wall on Moscow’s Arbat. That is, it is also painted with all kinds of graffiti and inscriptions. For Czechs, it’s not just a tribute to the musician. For a very long time, it was a symbol of the struggle for freedom and against the communist regime. Now there are more inscriptions on the wall dedicated to love and peace. (!) Be sure to take a marker with you to write something nice on this wall.

There is an urban legend that on this wall you can find the autograph of John Lennon. Unfortunately, this is not true. Lennon has never been in Prague. In addition, the graffiti on the wall has been completely painted over several times.

What to see nearby. 1) 60 meters away is the Lovers’ Bridge. There is a watermill wheel spinning and a statue of the waterman Kaburek located near it. 2) At 60 meters is Kampa Island . There is a sculpture “Babies” by David Cerny . And many more. 3) 180 meters away is the Charles Bridge, the main landmark and tourist attraction in Prague. 4) 180 meters away are the marks of the floods in 1890 and 2002. 5) At 350 meters is the Church of Our Lady of Victory – there you can see the figure of baby Jesus, who is dressed in various outfits.

It is a good place for selfies. The inscription is in hieroglyphics.

How to get to the John Lennon Wall

The wall is located in an area of Prague called Malo Strana , just 180 meters from Charles Bridge . To be precise, it is the distance from the wall to the stone staircase attached to the bridge to Kampa Island . 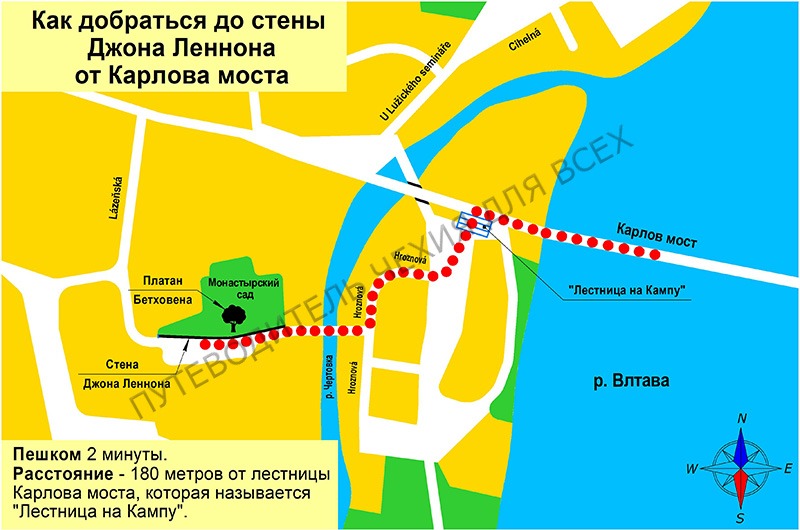 How to get to the John Lennon Wall in Prague.

So first you have to find this staircase. Sometimes it does not work the first time, because there are many tourists on the bridge (especially during the day), and the entrance to the stairs is lost among them. The way to find it is this. Stand on the Charles Bridge facing the Malo Strana (left bank of the river). On your left hand you will find the stairs between 4 and 5 sculptures, if you count them from the Malo Strana side.

How to find the stairs from Charles Bridge to Kampa Island.

Now we go down these stone stairs. We find ourselves on Kampa island. We have to walk straight ahead from the stairs. In 40 meters we take Hroznová Street on the right and turn there. After 30 meters this street will turn left. After turning left, you’ll see “The Bridge of lovers” on your right – it is usually photographed against the background of the working mill wheel. This is the bridge over the Chertovka River, which separates Kampa Island from Malo Strana.

Once you pass the “Bridge of Lovers,” you’ll notice graffiti on the wall of the building on the left. It is a “piece of John Lennon’s wall”, but not the wall itself. By the way, when you come to Prague, this piece may be painted over with paint, because it is supposedly not the main wall and its existence may not be guarded by anyone. We have to walk another 45 meters from this “fragment of the wall”, and then on the right side you will notice the fence of the Maltese Garden, which is painted with graffiti. Tourists scurry around it. This is John Lennon’s wall.

Lennon’s wall in Prague is a symbol of freedom and the new world. It appeared after the murder of the famous Beatle John Lennon, who became a hero of peace and love for Czech youth. And although the wall doesn’t have the same significance today as it did in the 80s, hundreds of people still leave their notes on it every day. My children and I couldn’t pass by such an opportunity either.

Why visit: colorful, conveys the spirit of “post-Soviet” Prague and modern trends in the city. How much does it cost: free. Where to go: near Charles Bridge (more details on how to get there below in the article), in Malá Strana district – its detailed description is in my article Where is the best place to stay in Prague?

A member of the famous British band the Beatles was shot dead outside his house on December 8, 1980. This murder shocked many people around the world.

I remember I was about 4 years old and one day inscriptions appeared on the walls of familiar buildings everywhere, “V.Tsoi – our God”, “Vitya, come back”. These signs appeared after Tsoi’s death. At that age I didn’t know who Victor Tsoi was, but there were so many questions in my head… How many people came out to write about the pain of losing their hero.

For Czech youth, John Lennon was also a hero who had gone before his time. In those years, most Western pop musicians were banned by the Communist regime, and some Czech musicians were even imprisoned for playing “wrong” music. 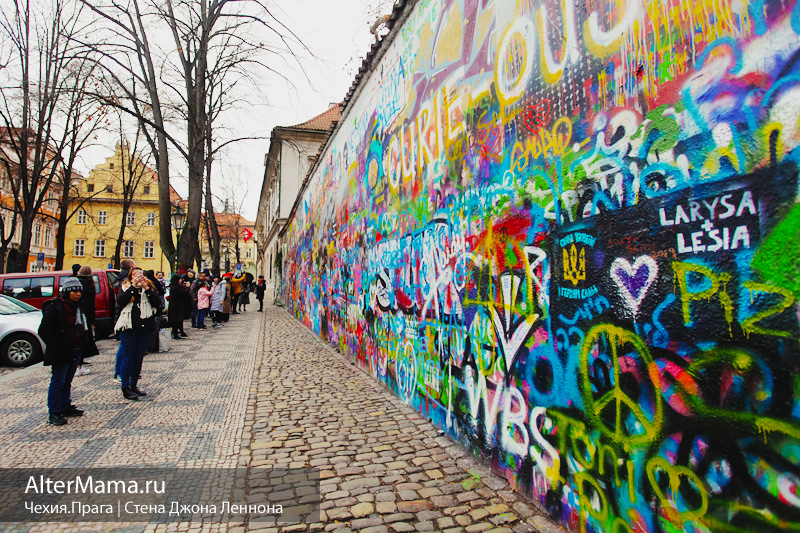 So the Lennon wall in Prague is not so much about love for the Beatles as it is about freedom from restrictions. Portraits of John Lennon and signs of pacifism were diluted with political messages and mockery of the government. 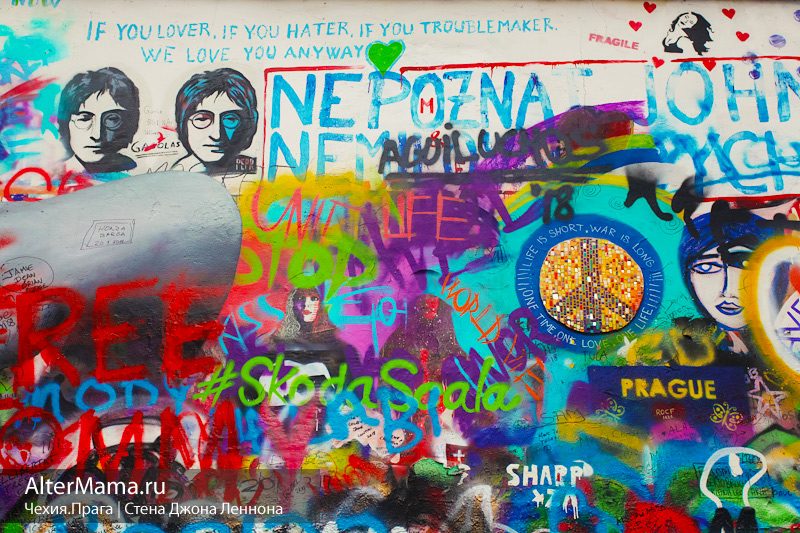 Of course, the police fought this scourge as best they could and constantly whitewashed the wall, but there were always recalcitrant youths who repeatedly bent their line with graffiti. By 1989, visiting tourists had already started to do their part by leaving various messages.

Because of sanctions, Booking.com, Agoda and other foreign sites left

You now have to use only Russian hotel databases to book accommodations. We use service Hotelukwhich searches for rooms in all available hotels around the world, and also helps to find the best price by comparing prices in different booking systems. The benefit sometimes reaches 1-2 thousand rubles per day. Try it yourself and compare! 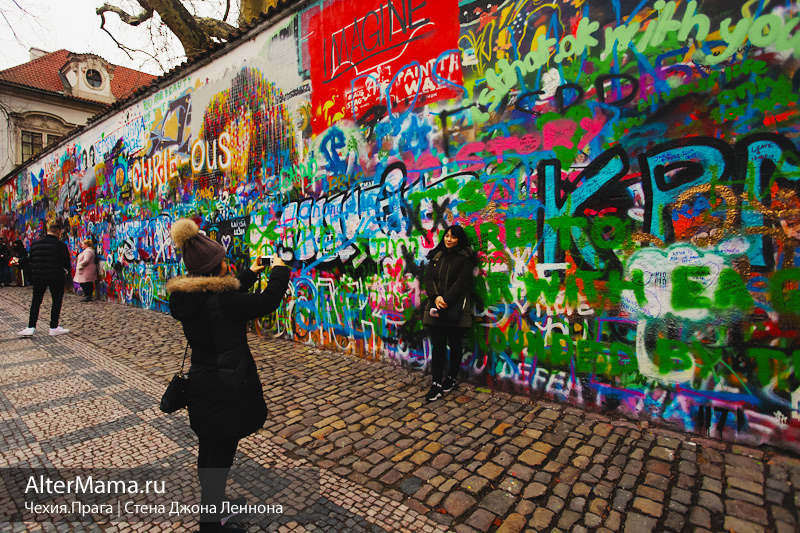 Layer after layer of paint, more and more words of love, names, thoughts, lyrics… another layer, a third and a fourth. The Order of Malta, which owns the wall, struggled with the “smear”, making it look godly, but their attempts were in vain. 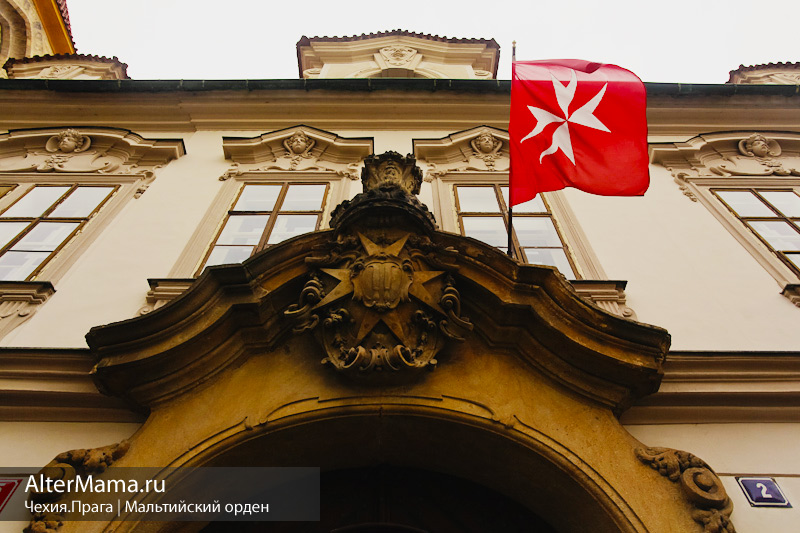 In the end, even the knights gave up and now the wall is forever colorful and bright. 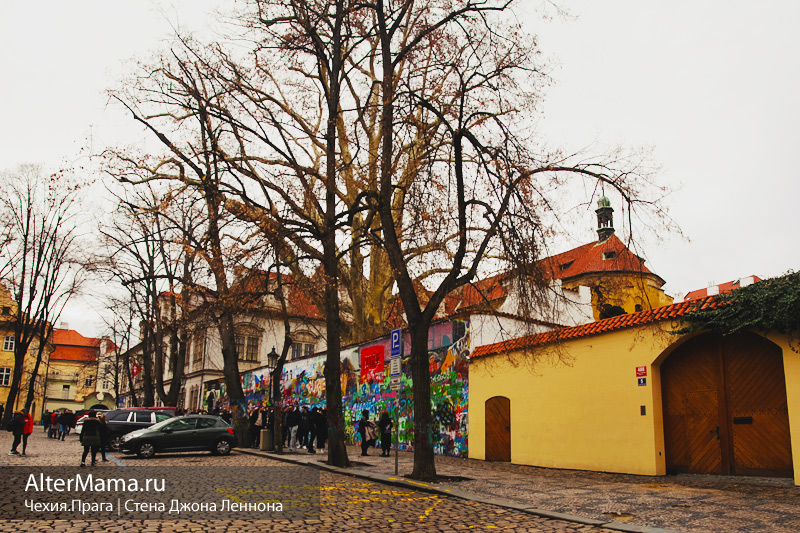 But the Order did not get confused and set up a restaurant in its courtyard, where tourists visiting the wall go in droves. 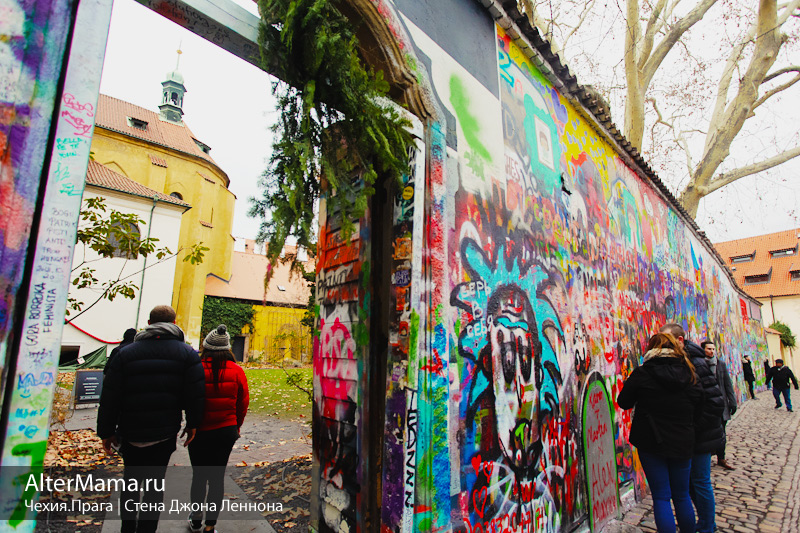 In the courtyard everything breathes with knightly history, even antique gilded orders hang in some places on the walls. 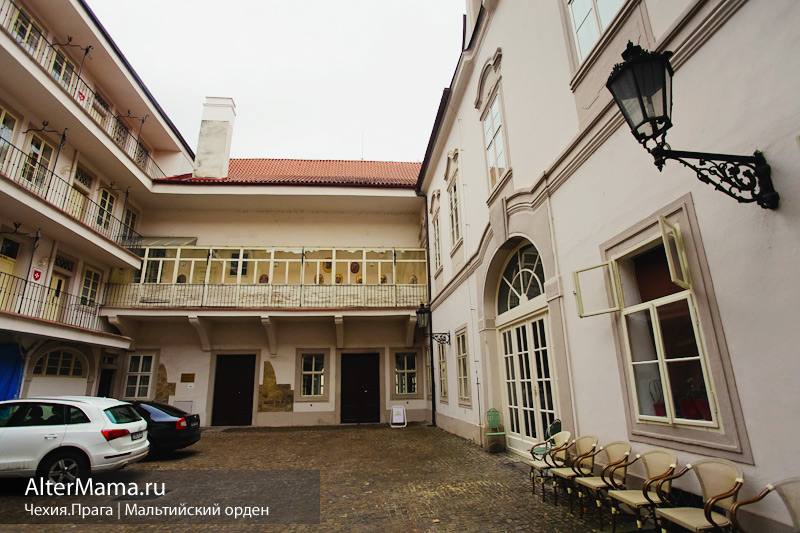 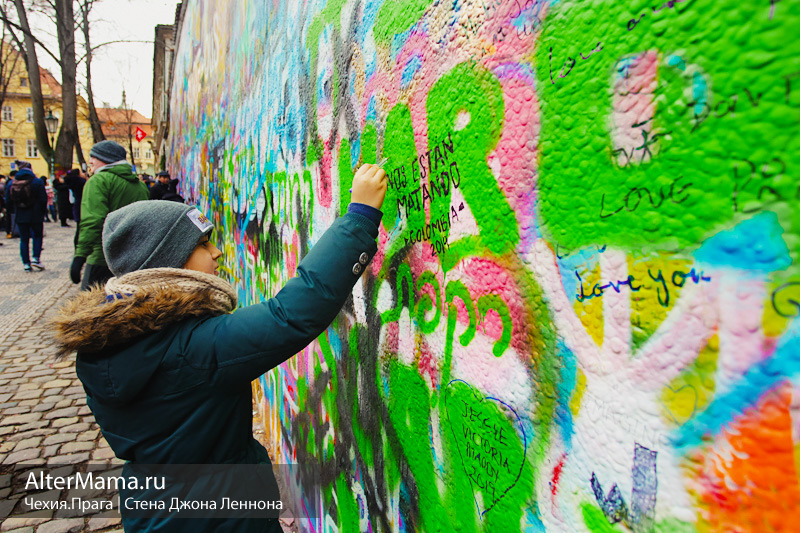 At least until it was repainted again… 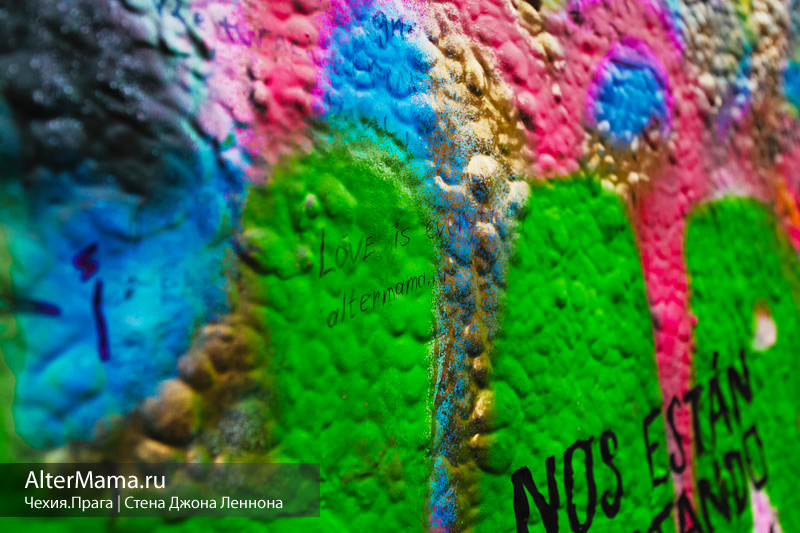 People who know, when they go to Lennon’s wall with kids, they take paint cans, or at least colored crayons. I even brought chalk with me from home so I wouldn’t have to look for it anywhere in Prague, but I left the cherished box in the apartment where we were staying.

Near the wall of John Lennon in Prague is another famous and no less interesting landmark – the river ýertovka with the old watermill wheel and the bridge of lovers, about which you can read in more detail in this article.

Lennon Wall in Prague on the map

On the map below, I’ve marked the main landmarks in Prague. John Lennon’s wall among them is marked with an orange tag with a musical note icon.

If necessary, the plus and minus can zoom in and out of the map, because due to the large number of attractions in Prague, some marks are tightly clustered and cover each other, while others, on the contrary, do not fall into the shown piece of the map.

How to get to John Lennon Wall in Prague

The most convenient way to get to these interesting places in Prague is to walk from Charles Bridge. Before you reach the Malostransky Bridge Tower, you have to go down the steps and then turn right.

If you look at this picture, I’m taking a picture just from the Charles Bridge at the steps down. Right in the middle behind the yellow building you can see a little nook to the right. The alley between the houses is to turn around, it will take you to the bridge, behind which is the Lennon Wall. 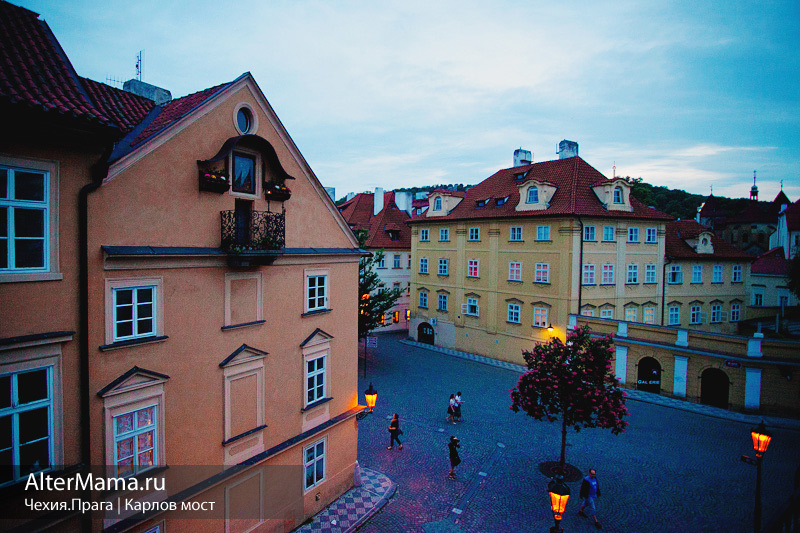 The nearest subway station Malostranská is farther than the Charles Bridge, so it is not convenient to walk there and the route is not logical.