Jug Valley is a prehistoric pottery workshop of giants. Laos

The Plain of Jars is an undiscovered landmark in Laos. Thousands of giant megalithic vessels are scattered across the mountain valleys and lower foothills of the central plain of the Xiangkhoang Plateau in the main mountain range of Indochina.

The vessels are similar to jugs, hence their name. They are striking in size – up to 3 meters in height, and weighs up to 6 tons. 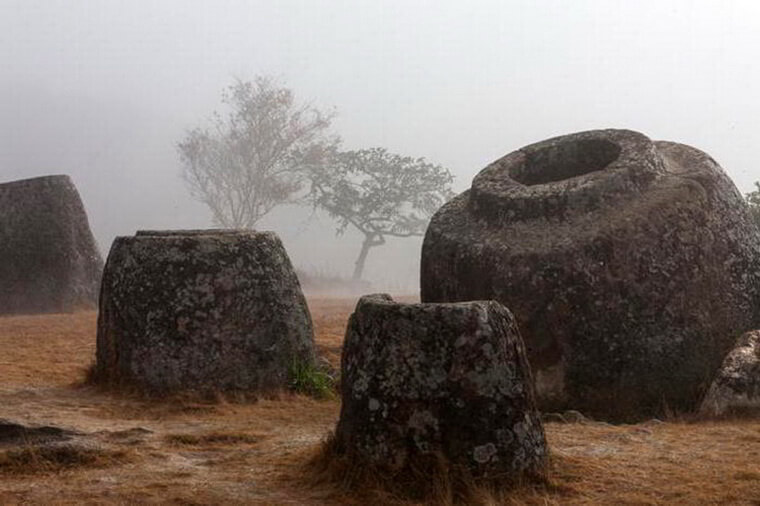 It is not only a tourist attraction, but also a mystery to scientists.

Where is the Valley of the Jugglers

It is located in Xiengkhuang Province in the northern part of the country, near the town of Phongsavan. 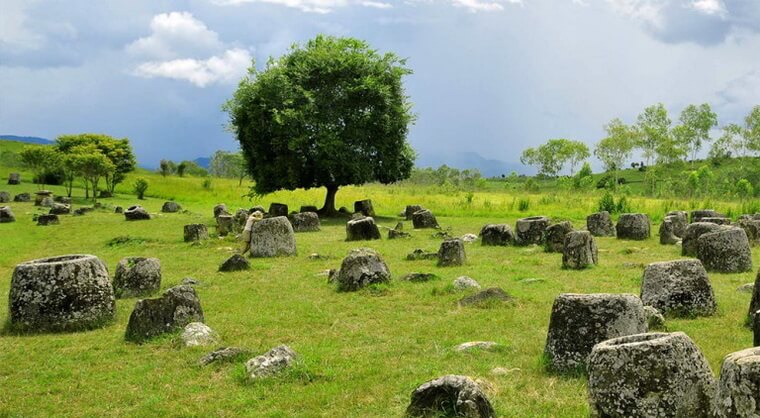 The Valley has several isolated sites with vessels. In total, there are more than 90 such sites. They have their own numbers. And on each of them from one to 392 stone jugs. Their height varies from 1 to 3 meters. All the jugs are carved out of stone. 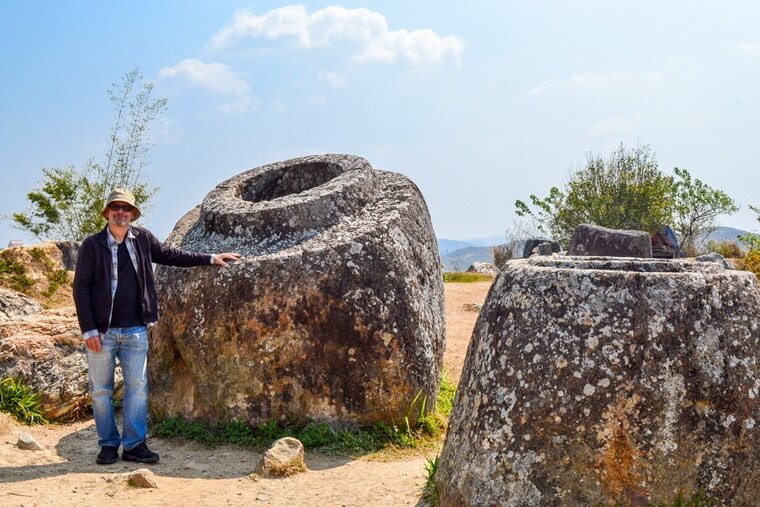 Compare the dimensions. This jug is at least 2 meters high. And this is not the tallest one.

The jugs are cylindrical and the lower part is always wider than the upper part. The vessels have no bas-reliefs and drawings, except for one jug on the main site, numbered 1. It has a silhouette of a man with raised arms and bent knees engraved on the outside.

By the way, similar images are found in rock art in the mountains of Guangxi (China) and date back to the 5th-2nd centuries BC.

According to scientists, the jugs are approximately 1,500 to 2,500 years old.

Since many jugs have a specific seating area at the top, it is believed that they were originally covered with lids. Several flat stone lids have been found in the vicinity. But it is assumed that the lids themselves were made of a material more susceptible to breakage than the jugs. Therefore there are far fewer lids than vessels. The lids found contained bas-reliefs with images of tigers, frogs and monkeys.

One of the few lids that have survived is a bas-relief lid.

Also found are stone disks, which are different from the lids. Perhaps they were signposts of burial sites.

It is worth noting that five types of rocks were found in the vicinity: sandstone, granite, conglomerate, limestone and breccia. Most of the jugs are made of sandstone. It is assumed that ancient craftsmen used iron chisels to make these vessels, but there is no conclusive evidence of this. 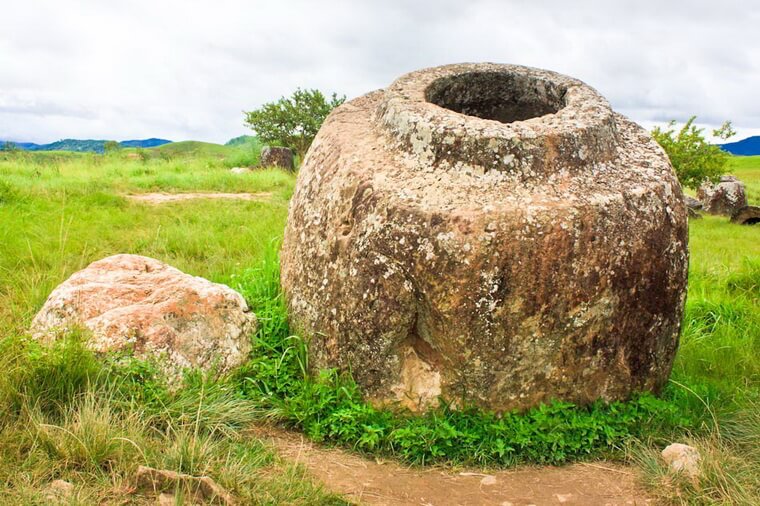 Archaeologists offer us several hypotheses of the origin of the jugs.

Jugs as a burial site

One theory is that the jars were a kind of burial or cremation urn.

In 1930 the French researcher Madeleine Colani suggested that the jars were related to prehistoric burial methods. Perhaps the cremation of bodies and subsequent burial of the remains in a separate place took place in them.

In particular, she found a cave in the area of site No1, which has a limestone formation. There is a natural hole in its northwestern part and two artificial ones on top. These holes Colani thought were chimneys for a crematorium. She also found materials in the cave to support her cremation theory. Colored glass beads, burnt teeth and bone fragments were found in some of the jars. Human bones, fragments of pottery, iron and bronze objects and charcoal remains were also found in the vicinity. The bones and teeth inside the vessels indirectly prove cremation. 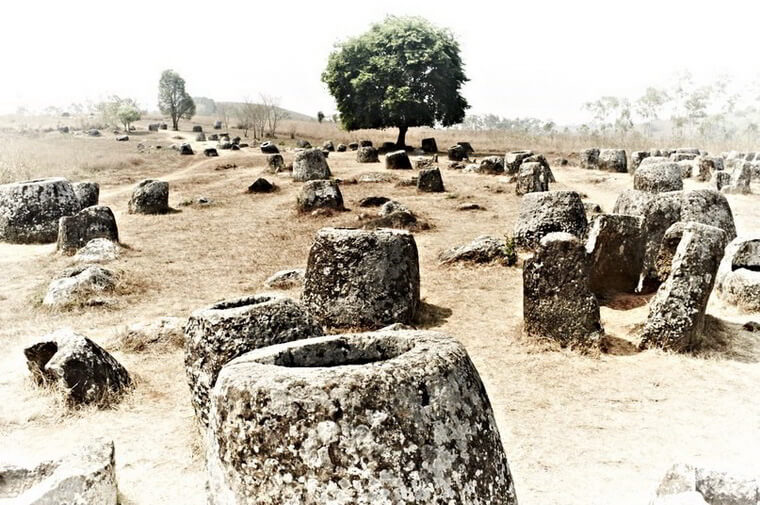 This may be an ancient cemetery.

Incidentally, South India used similar giant funerary urns called Mudhumakkal Tazhi or Eema Tazhi. The bodies of the dead were placed in them while seated and together with personal goods and ornaments. Such a practice existed until 200 AD. For the Thai, Cambodian and Laotian kingdoms it was characteristic to place the corpse in a vessel. It was believed that in this way the soul gradually passed from the earthly world to the netherworld. Later the body was burned and the remains were buried in the ground.

Jars as reservoirs for water

There is also a version that these jugs were created as regular water reservoirs. Their main function was to collect rainwater for traveling caravans. There was a recurrent drought in the area and it was very important to have fresh water in reserve.

The beads found at the bottom of the jugs may have been a kind of tribute to the caravaners, accompanied by prayers for rain. 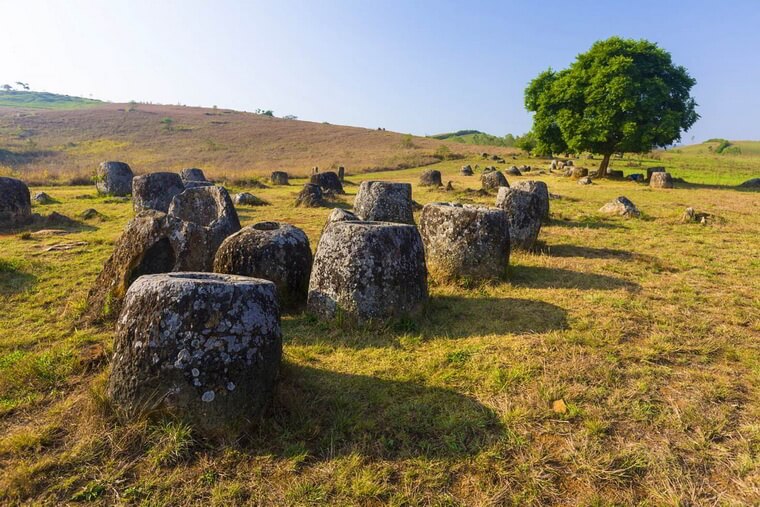 Legends of the Jug Valley

The locals believe in a legend that there were giants who lived here long ago, to whom these vessels did not seem huge at all.

Lao legends tell of giants who inhabited the area. They were believed to have been ruled by a king named Khun Chung. The king fought fierce wars with his neighbors and when he defeated them all, he ordered them to make huge jugs of Lao Lao (the local traditional rice wine) to celebrate the occasion. 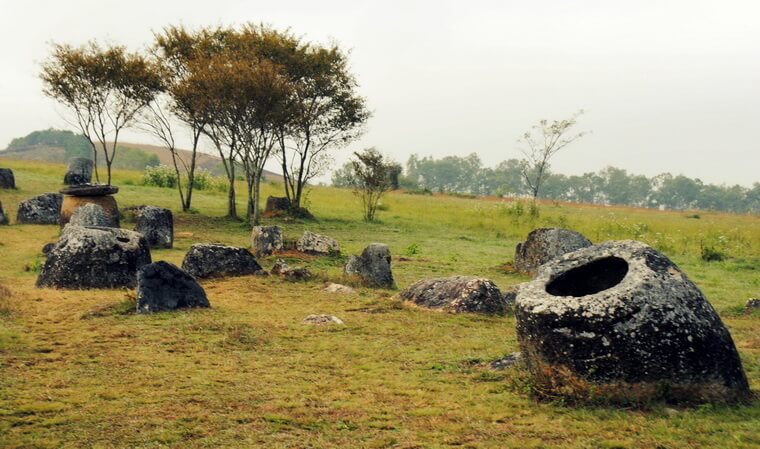 Another version says that the jars were cast from natural materials, including clay, sand, sugar and animal products.

Locals believed that the cave at site No1 was actually a kiln, and that the vessels were created there, not carved out of stone at all. 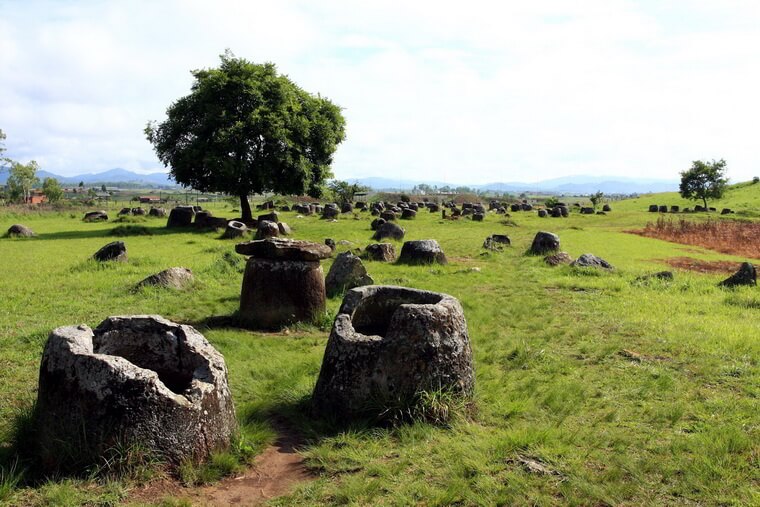 Jug Valley during the war.

During the Civil War most of the site was littered with shells and bombs, so it is difficult to study this phenomenon. 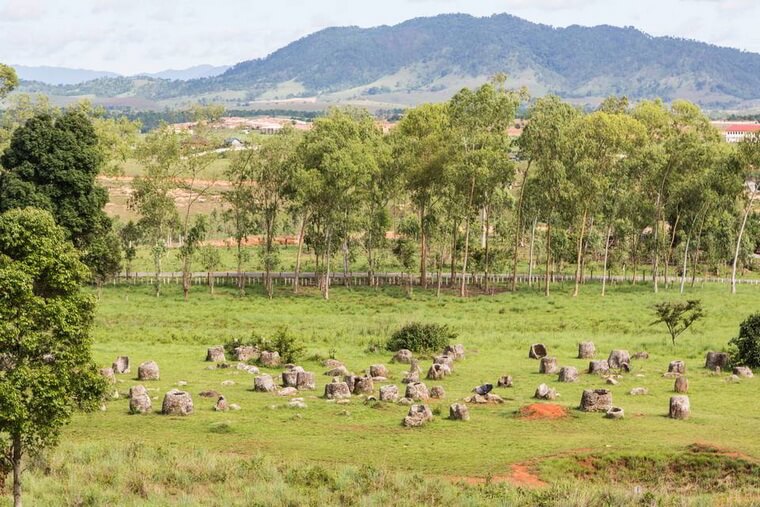 Between 1964 and 1973, Pitcher Valley was heavily bombed by the U.S. Air Force. In general, the U.S. dropped more shells on Laos than during the entire Second World War. More than 262 million cluster bombs fell on Laos. It is estimated that about 80 million of them did not explode and remained a deadly threat to the local population.

Unexploded mines are still found here, so not all sites are accessible to tourists. 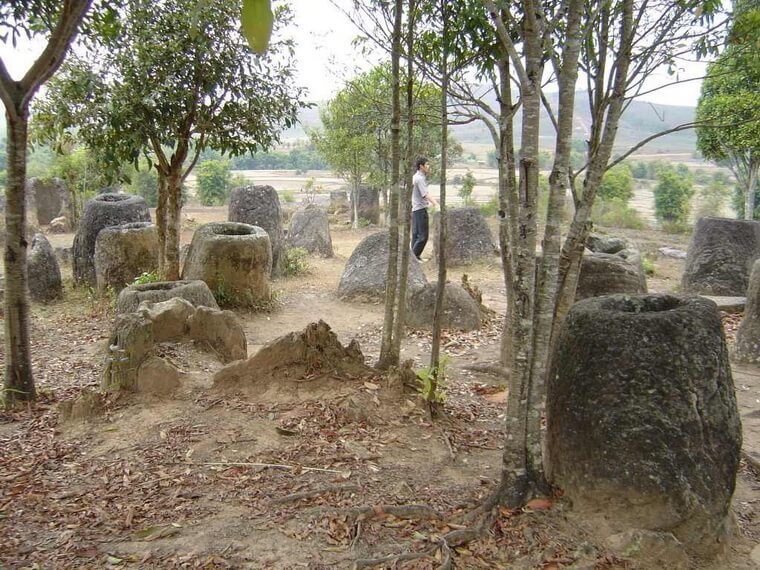 The most studied and most visited place is located 5 kilometers from the town of Phongsavan and is called Plate No 1. In addition, there are seven other sites available. They are completely cleared of unexploded bombs and are open to visitors. They are sites No 2, No 3, No 16 near the old capital of Xieng Khouang, site No23 near the hot spring in Muang Kham, site No 25 and site No 52, where you will find 392 pitchers.

Jug Valley in Laos – a pottery workshop of giants

What the pyramids were really built for

Woman can no longer walk because of an allergy to gravity

Could the universe be a living conscious entity

NASA and China vie for the best spots on the moon

UFO spotted in the skies above Vologda

UFO over New Mexico is linked to Air Force training

Tumor weighing 26 kg grew in the belly of a man

The first image of an exoplanet obtained by the Webb telescope

First three-dimensional image of a double system with an exoplanet

U.S. government, army and NASA hide the truth about UFOs

A UFO flew past a family while camping in Utah

Woman thought she was a man, then changed her mind

Earth may be de-orbiting and drifting through space

How superwinds are helping the galaxy evolve

Goats climbed into a police car and ate protocols

U.S. Congress admits UFOs may not be man-made

A new way to simulate black holes and accretion disks

Organic molecules found in ice particles around a protostar

Witnesses mistook cobra crawling on woman for spirit of her son

The truth about Nazi UFOs

Spider-Man rescued a boy stuck on a slide

Is Pluto a planet

Love Island star claims to have seen a UFO

What are the chances of extraterrestrial advanced civilizations

Baby obsessed with a creepy doll

Manipulation of the weather is real

Can a man survive without animals and plants

Monk Abel foretold the destiny of the world

Nanodiamonds capable of delivering drugs through the skin

New simulator predicts what awaits us on Mars

Pentagon is preparing to open an office for people in black

Samaritans baffled by a steady column of light

Strange case of a family’s encounter with a UFO

Cattle mutilations are the work of aliens