Juliet’s House is a late medieval mansion in Italian Verona, identified with the house where the main character of William Shakespeare’s tragedy lived. Although the events described in Romeo and Juliet are fiction and are not directly related to this massive structure, the building has already acquired a slight halo of mystery and the status of the most romantic corner of Verona.

The mansion, referred to today as Juliet’s House, was built in the 13th century and belonged to the ancient Italian Del Cappello family. It is believed that for his legendary work Shakespeare interpreted the surname of this family (Del Cappello – Capuletti).

In 1667, the descendants of Del Cappello urgently needed money, and the family estate was sold. Until the early 20th century, the house regularly changed owners, gradually dilapidating and falling into disrepair. Only in 1907, the building was bought by the city council to create a museum dedicated to the immortal play.

For almost thirty years the Verona authorities were hesitating and trying which way to approach the restoration of such an ancient architectural object. It is possible that reflections could have dragged on for a longer period, if it were not for the film “Romeo and Juliet” by George Cukor, released in 1936. In the wake of interest in the romantic adaptation, the Veronians set about fixing up the house.

The initial restoration in the 1930s resulted in the mansion having a so-called “Juliette’s balcony”, cut presumably from an ancient tombstone. The facade of the building was decorated with carved elements, and the courtyard was completely reconstructed in accordance with the sets from the film by D. Cukor. The second period of the “revival of the legend” is in the 1970s. At this time, a bronze statue of Romeo’s beloved, which later became part of a romantic cult, appeared in the patio.

In 1997, a museum exhibit was opened in Juliet’s house, and in 2002, some of the props used during the filming of F. Zeffirelli’s Romeo and Juliet were moved here.

Juliet’s house today: what to see and what rituals to observe for the tourist

Juliet’s house is one of the few Verona sights that can be visited both for money and with absolutely empty pockets. If you’re not burning with the desire to part with your own savings, just go to the courtyard to appreciate the exterior of the legendary house. You can stand under the balcony from which the heroine of Shakespeare’s tragedy languidly gazed at her admirer, absolutely free of charge.

As you stroll through the grounds, try to approach the statue of Juliet. There is a funny ritual associated with this one and a half meter tall sculpture: it is believed that whoever touches the girl’s breasts will have a happy love affair. Since 1972, there have been so many people willing to touch the charms of the bronze Italian girl that the statue eventually cracked. To prevent further destruction of the monument, the original Juliet was hastily moved to the museum, replacing it with a more modern copy.

By the way, the courtyard did not always look so clean and cozy. Just a few years ago, its interior walls were an unattractive sight. The reason was a long-standing tradition, according to which visitors of the house left notes for Juliette on the stonework. Requests, wishes, and love poems were written on small scraps of paper, candy wrappers, and scraps of newspaper. In addition, all this colorful diversity was attached to the wall with ordinary gum. In 2012, the city council officially banned the placement of notes on the wall, setting a fine of 500 euros for violators. Now, to “get through” to Shakespeare’s heroine, you have to write a regular letter to the address of the official Juliet Club, or compose an electronic message on the organization’s website julietclub.com.

READ
The Rhône and Arve - the confluence of colorful rivers. Geneva. Switzerland

To get inside Juliet’s house, you have to pay the modest sum of 6 euros. The entrance ticket gives the right to view the premises and also provides the opportunity for a romantic photo session on the balcony. By the way, here you can find mailboxes where tourists are allowed to leave letters to Juliet.

The interior design of the house is made in the style of the Renaissance. The walls are decorated with ancient frescoes, brought here from other buildings of Verona, and of course, portraits of the most famous couple in love in the world. On the second floor of Juliet’s house there is an exit to the balcony.

The next floor is occupied by a luxurious hall with a fireplace, where you can see the family coat of arms of the Del Cappello family, which is an ordinary… hat. It is believed that it is in this hall where the literary characters met and fell in love with each other. On the penultimate floor the props from the film “Romeo and Juliet” by F. Zeffirelli are carefully preserved: a luxurious wooden bed and costumes of young lovers. The final part of the tour is the ascent to the top floor of the house, where computer monitors are installed. The technics are skillfully mounted in special “covers”, perfectly harmonizing with the interiors of the room. If you have not yet had time to leave your own message for Juliet, then this omission can be corrected right here.

The courtyard and balcony of Verona’s most popular attraction are always crowded and noisy, so be prepared to pay for the opportunity to take a good picture by standing in line for a long time.

Fans of lavish events should schedule a tour of the legendary house for September 16. That’s the day Juliet’s Birthday, part of the city’s Medieval Festival, is celebrated here.

A souvenir shop is open on the grounds of the house, where you can buy various amusing little things with love symbols.

In Juliet’s house wedding ceremonies are held for the newlyweds-to-be. The lovers dress in medieval costumes and receive a marriage certificate certified by the “representatives” of the Montague and Capulet families. For foreign tourists, such a celebration will cost an average of 1,500 euros.

Whether the famous characters of Shakespeare’s Romeo and Juliet existed in reality or not is not known. People are divided into two camps. The first believe that the tragic story of young lovers was based on real events, and the second that it is completely made up. But both of them make a pilgrimage by the hundreds of thousands to Verona to see Juliet’s House and the very balcony where she stood listening to love confessions from the ardent Romeo. 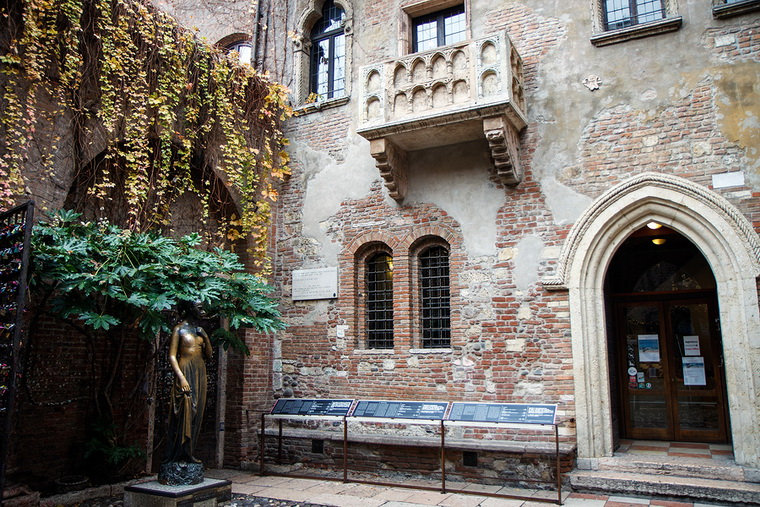 A little bit of history

The house was built in the 13th century, and for a long time it was owned by the ancient family Cappello. This family name is probably the prototype for the family Capuletti in the play. The family coat of arms of the Capello family can still be seen on the wall. In 1667 the house was first sold. Since then, it has changed several owners. As a result, by the early 20th century it was in a state of disrepair and overgrown with vines. In 1907 the municipality bought the house and decided to turn it into the “House of Juliet”, taking advantage of the similarity between the names of the first owner of the house of the family Capello and Capuletti in a play by Shakespeare.

Let’s dispel the halo of mystery – Juliet’s House actually has nothing to do with either Shakespeare or the fictional Montagues and Capulets. 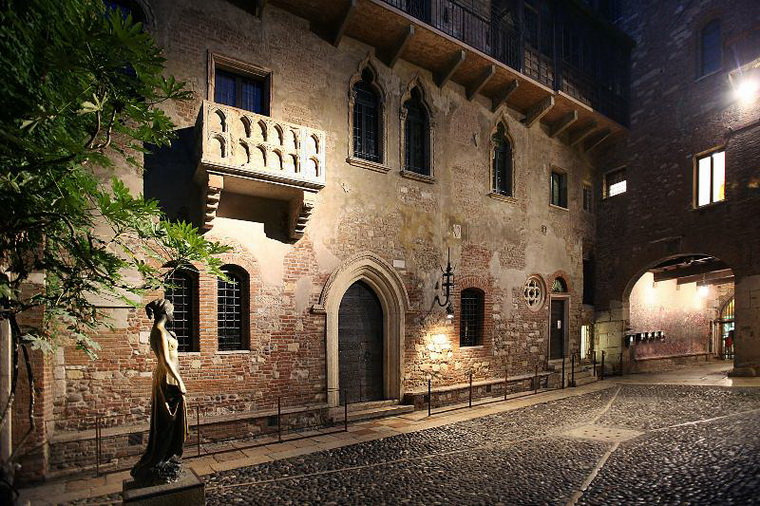 Significant restoration work was done in the 1930s. Windows and Gothic doors were installed. Active work was carried out from 1937 to 1940, after the release of the film “Romeo and Juliet” in 1936. Even the legendary Juliet balcony appeared in the reconstruction. The interior of the house was restored much later, in the 1990s. A museum dedicated to “Romeo and Juliet” opened in 1997.

The exhibition inside the house shows ceramics, frescoes and furniture of the medieval period. To be fair, these items did not belong to the real Capello or the fictional Capuletti. The museum features paintings and photographs from the film on the theme of the play. In 2002, the museum added two costumes and a large bed. These were props from the 1968 remake of the film. 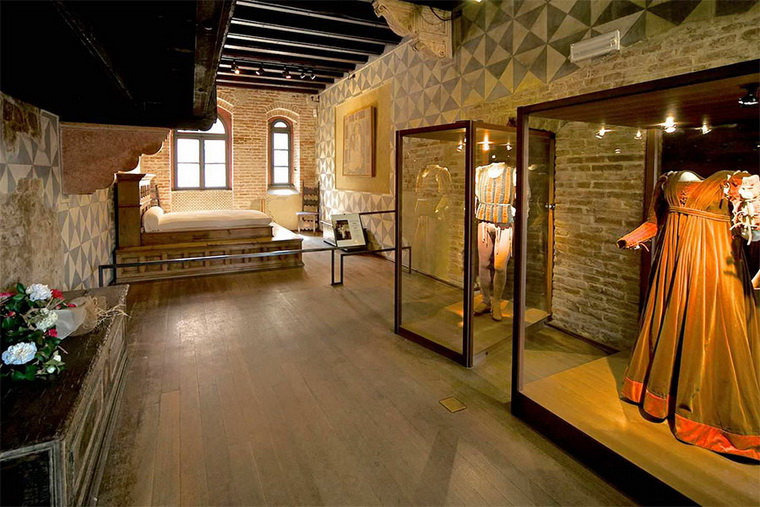 On the second floor is Juliet’s famous balcony, which overlooks the patio. On the third floor there is a large hall with a fireplace and the Capulet family crest. The interior of the courtyard has also been completely redesigned. A monument to Giulietta, made in bronze by the artist Nereo Costantini, was erected here in 1972.

The history of the bronze Giulietta

On the 400th anniversary of William Shakespeare (23.04.1964), a local newspaper reminded the inhabitants of the famous words from the play “I will erect a statue in honor of your daughter”, said by Romeo’s father at the end of the tragedy.

Verona sculptor Constantini made the sketches of the statue for free. However, the Lions Club of Verona paid for the casting of the statue itself. When the statue was ready, the authorities were reluctant to install it in the courtyard for a long time. Only in April 1972, the monument began to decorate the House of Juliet. 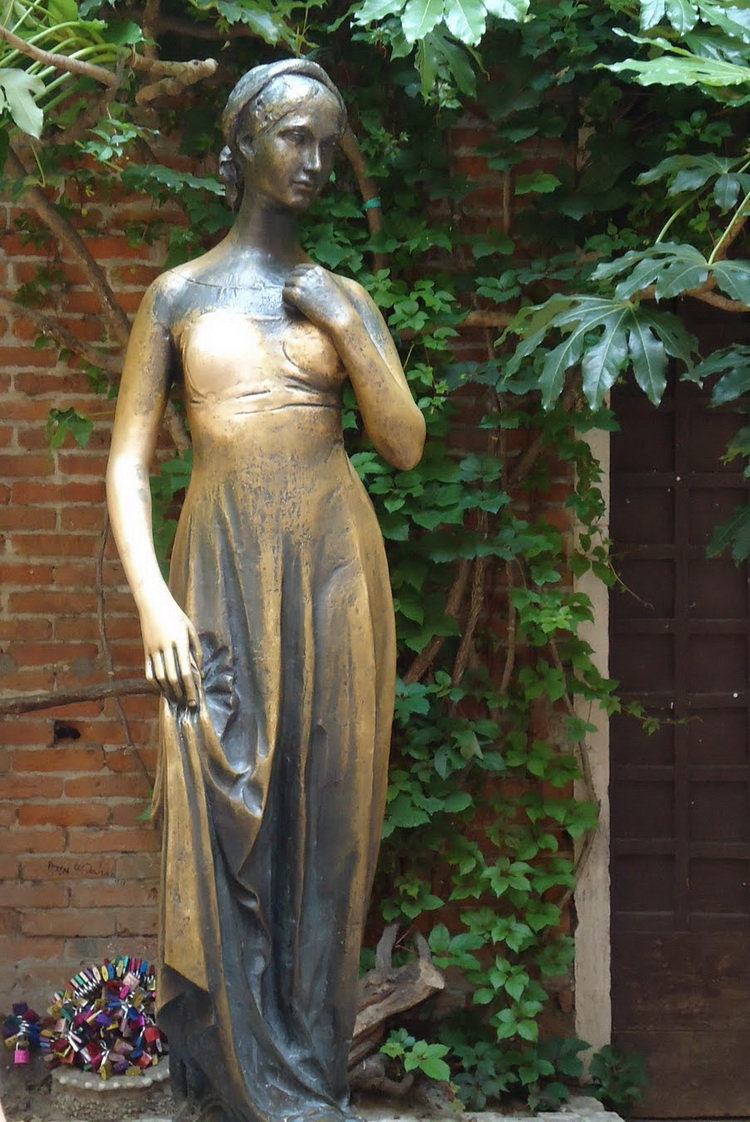 Juliet’s house and statue in tourism

Usually all tourists stroke the statue, believing that it will bring good luck. If you pay attention to the heterogeneous color of the statue’s coating, you will easily determine which place to stroke. If you haven’t considered it, let’s say it’s the right breast of the monument.

Visitors wanted happiness so badly that over a few decades they rubbed the statue almost to the holes. So in 2014, the old monument was moved to the museum and a replica was installed in its place.

In addition to harmless stroking of the bronze Juliet, tourists actively painted the nearby walls and doors with graffiti (not always pleasing to the eye) and tried to stick numerous love messages on the wall or place them in the crevices. Both had an extremely negative impact on the exterior of Juliette’s House. That’s why since 2012 the authorities, under threat of a fine, have forbidden painting walls and taping notes on them. By the way, the fine is not insignificant – 500 euros.

For those who still really want to send a note, they have installed mailboxes and computers here. All notes go to the Juliet Club (an organization of fans of the play).

Address and opening hours of the museum