Kailasa Temple is a huge temple carved out of monolithic stone

The Kailasa (or Kailash) Temple is actually one giant stone that has been chiseled into a building. Or rather to say a whole complex of buildings. That is, the entire temple complex is carved out of one huge rock. 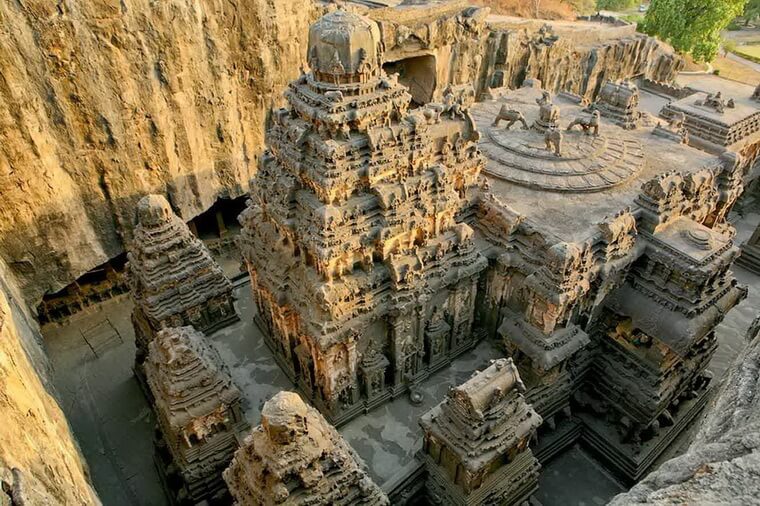 You will find the Kailas Temple in the town of Ellora in the state of Maharashtra in western India. 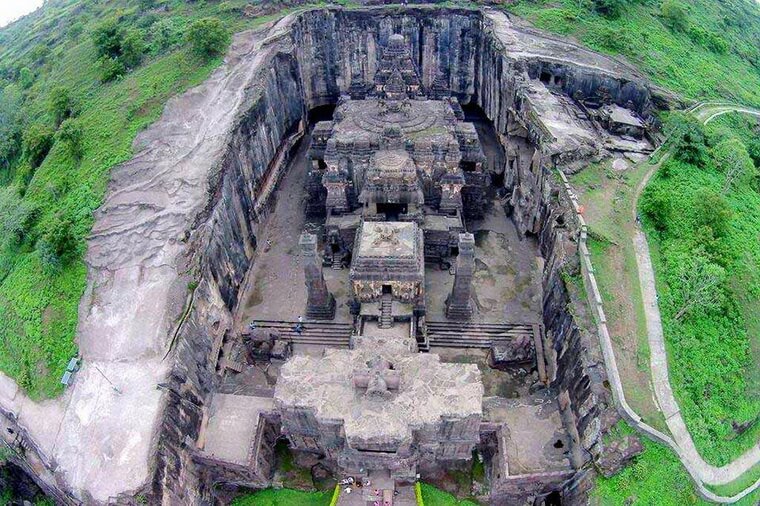 Kailasa temple from above

The Kailas Temple is one of the largest monolithic ancient Hindu temples in the world. The stone-carved building is considered one of the most magnificent cave temples because of its filigree workmanship, sculptures, size and architectural design.

It must be said that there are a total of 34 cave temples in Ellora. Together they form the caves of Ellora. 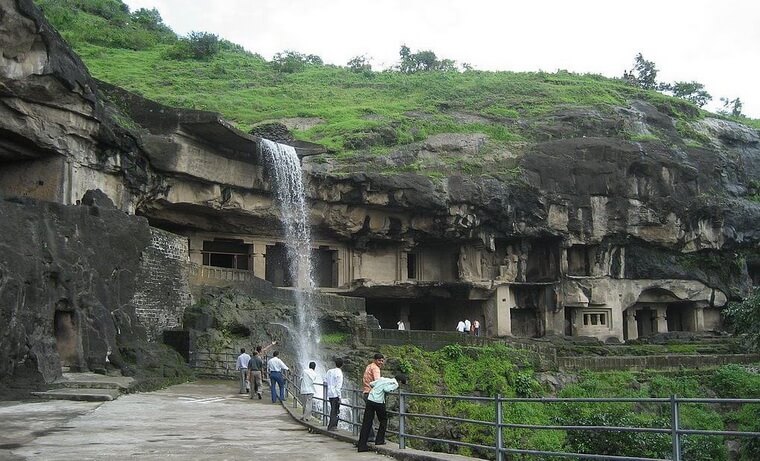 These are the other cave temples in Ellora.

They are arranged in a single line for two kilometers. The temple of Kailas is the largest of them (in the directories it is listed as cave No16). 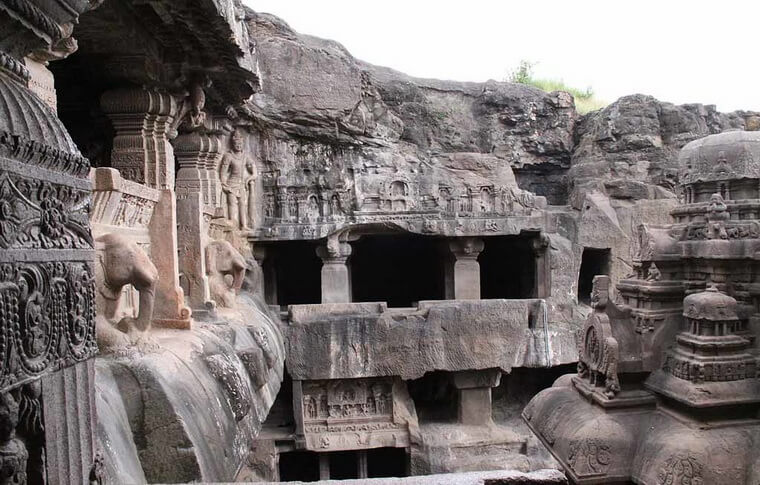 By the way, pay attention to the Dambulla Temple in Sri Lanka. It is carved into the rock, and is also quite interesting.

Reliable information about the history of the temple is scarce. Its construction is related to the king Krishna I of the Rashtrakuta dynasty, who ruled between 756 and 773 years A.D. Although no inscriptions about it in the temple.

The architecture of the temple retains traces of the Pallava and Chalukya style. There are several carefully carved panels depicting scenes of Ramayana and Krishna’s adventures. 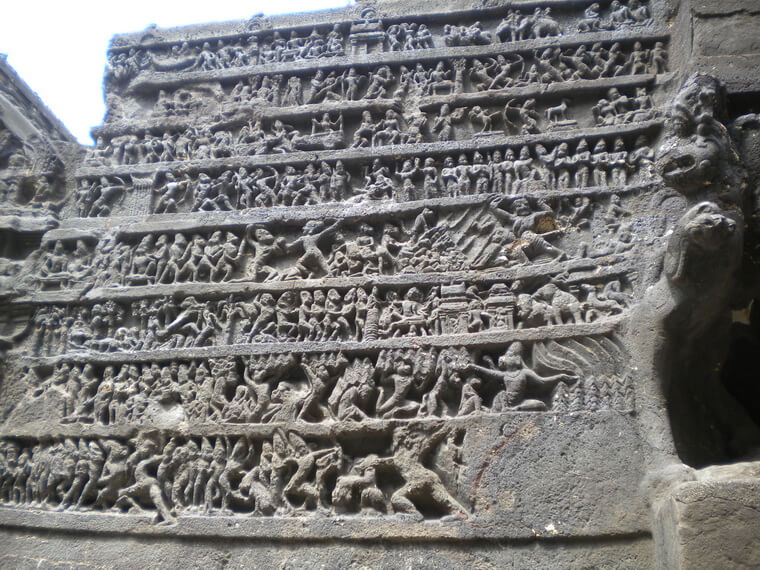 Scenes from the Ramayana.

The temple is a unique complex with a clear architectural and sculptural design combined with a rather large size. Incidentally, its design and size have led scholars to believe that the construction of the temple spanned the reigns of several kings. Nevertheless, it is believed that the main parts of the temple were completed precisely during the reign of Krishna I, while some other parts of the temple are attributed to later rulers.

READ
Tottori is a desert in Japan

The temple of Kailash resonates religiously with Mount Kailash in China. All Hindus believe that this mountain is where the god Shiva lives. Therefore, the temple was named after this famous mountain.

The temple of Kailas is known for its unique vertical excavations. That is, workers began to carve the temple out of stone, starting at its top and gradually descending below. 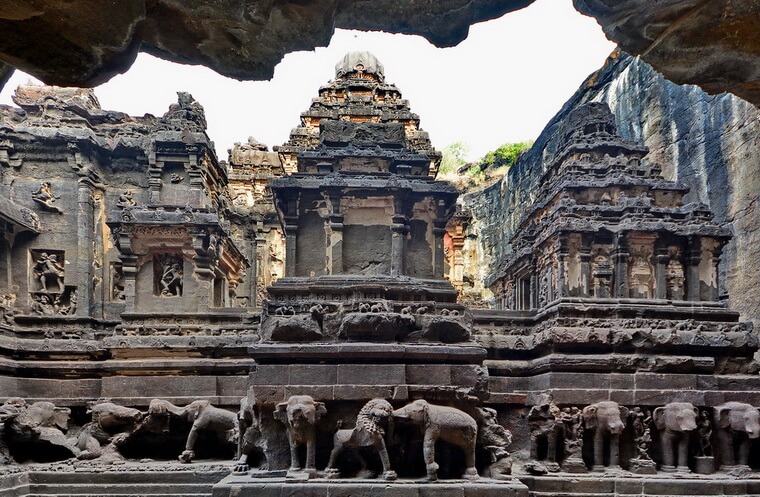 The whole thing was actually built from the top down

An interesting fact – it took about 200,000 tons of stone to be removed with a hammer and chisel to completely carve the buildings. 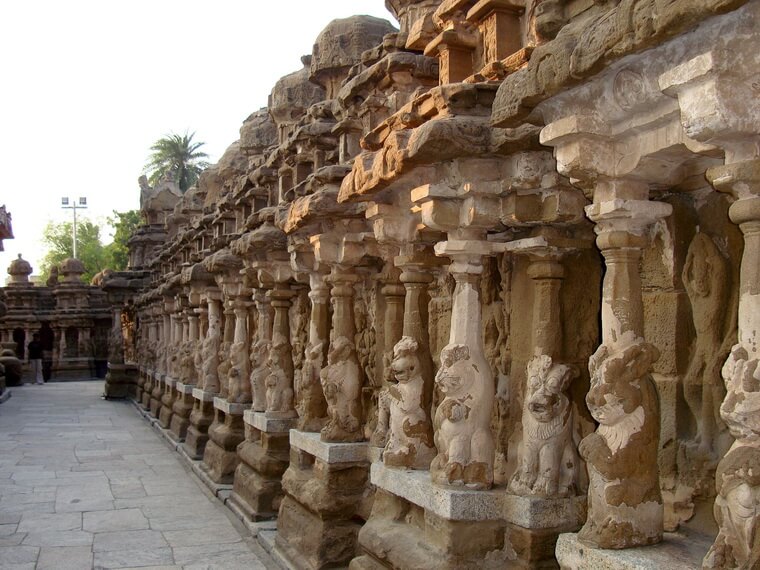 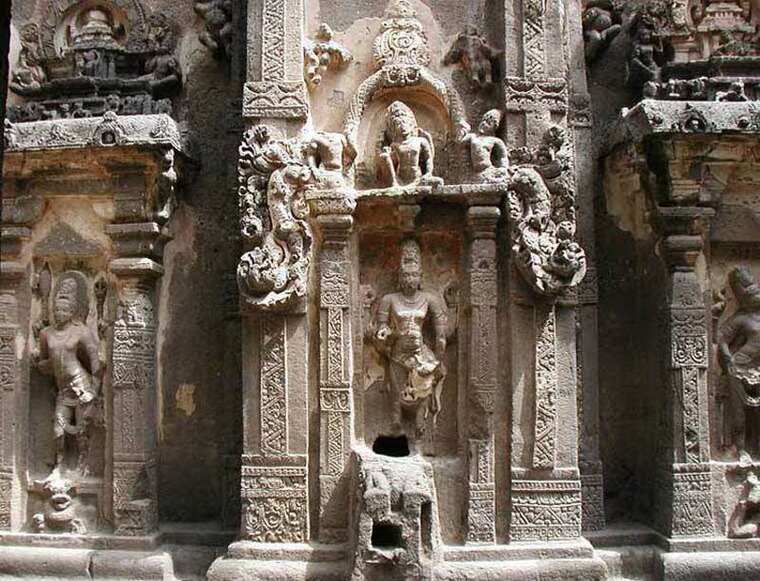 The U-shaped courtyard has a two-story gate. The dimensions of the courtyard are 82×46 meters. The central temple dedicated to Shiva is in the center of the courtyard. The temple has a mandapu (open hall) with a flat roof supported by 16 columns. Here you will see scenes from the Ramayana and Mahabharata.

The Kailas Temple is an engineering marvel that was built from top to bottom with zero error. 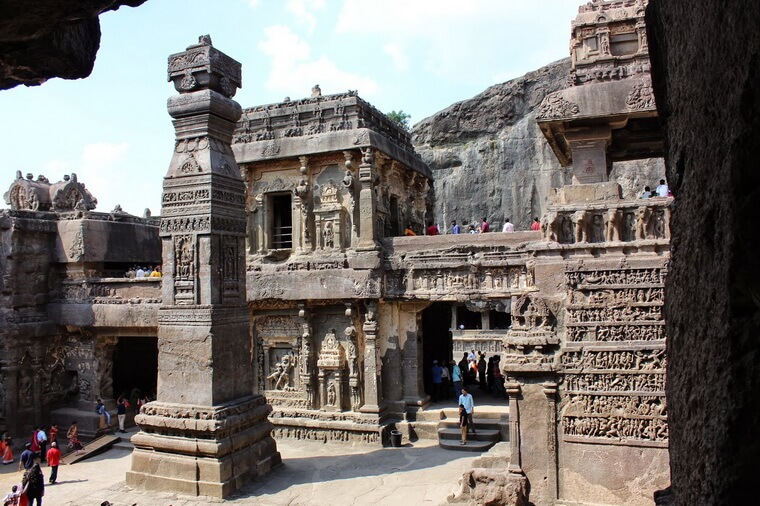 There is an interesting medieval legend connected with the temple. According to the legend, a local king fell seriously ill. His wife began praying to the god Shiva to cure her husband. She promised to build a temple if the king survived. Not only that, the queen vowed to observe the strictest fast until she saw the shihara of the temple. Shikhara is the top of a Hindu temple and literally translates as “mountain peak.

To give you an idea of what we are talking about, imagine how much the queen would have to fast until the temple was built. 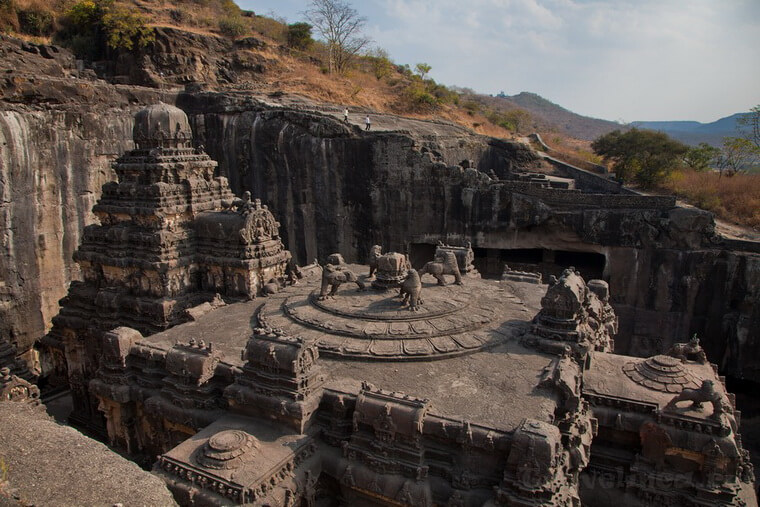 God heard the queen and cured her husband. The queen immediately ordered the temple to be built. But many architects said it would take months to build a temple with a shihara. Only one architect named Kokasa convinced the royal family that they could see the temple’s shihara in a week.

So what did he do? That’s right – he began to build the temple from above. gradually carving out the rocks below. He was able to finish the shihara within a week, allowing the queen to finish her post quickly.

It is an interesting fact that numerous records from the 11th-13th centuries mention architects from central India who were born into the famous Kokas family. So it is likely that the legend is not such a legend.

The Kailash Temple is a treasure of Ellora. India

India holds legends and traditions, ancient temples and “places of power.” In the fertile land of India the great religions of Sikhism, Jainism, Buddhism, and Hinduism were born.

One of the most important monuments of ancient history are the cave temples of India, which served as a refuge and center of learning for the followers of Buddhism, Hinduism and Jainism. 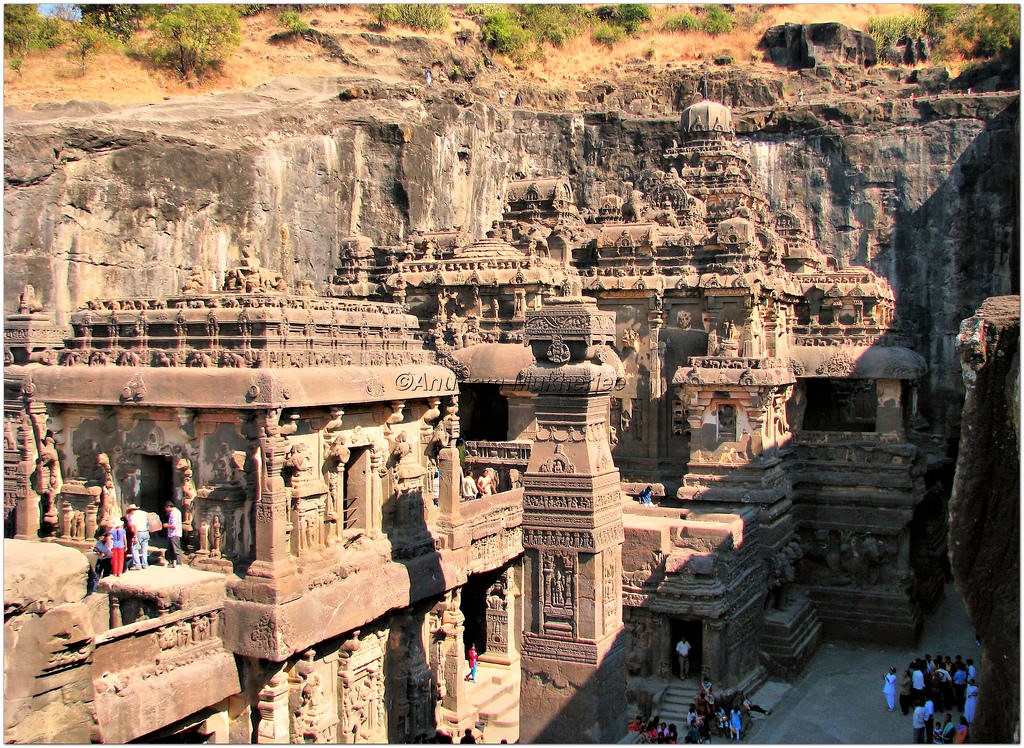 The most famous and well-preserved cave temples are in the state of Maharashtra near the city of Aurangabad, the ancient capital of the Mughal Empire. Long before the arrival of the Mongol invaders this region was a center of trade and religion. Ancient trade routes passed through the Deccan Plateau and pilgrims found shelter in the caves, which were rebuilt as spiritual sanctuaries. 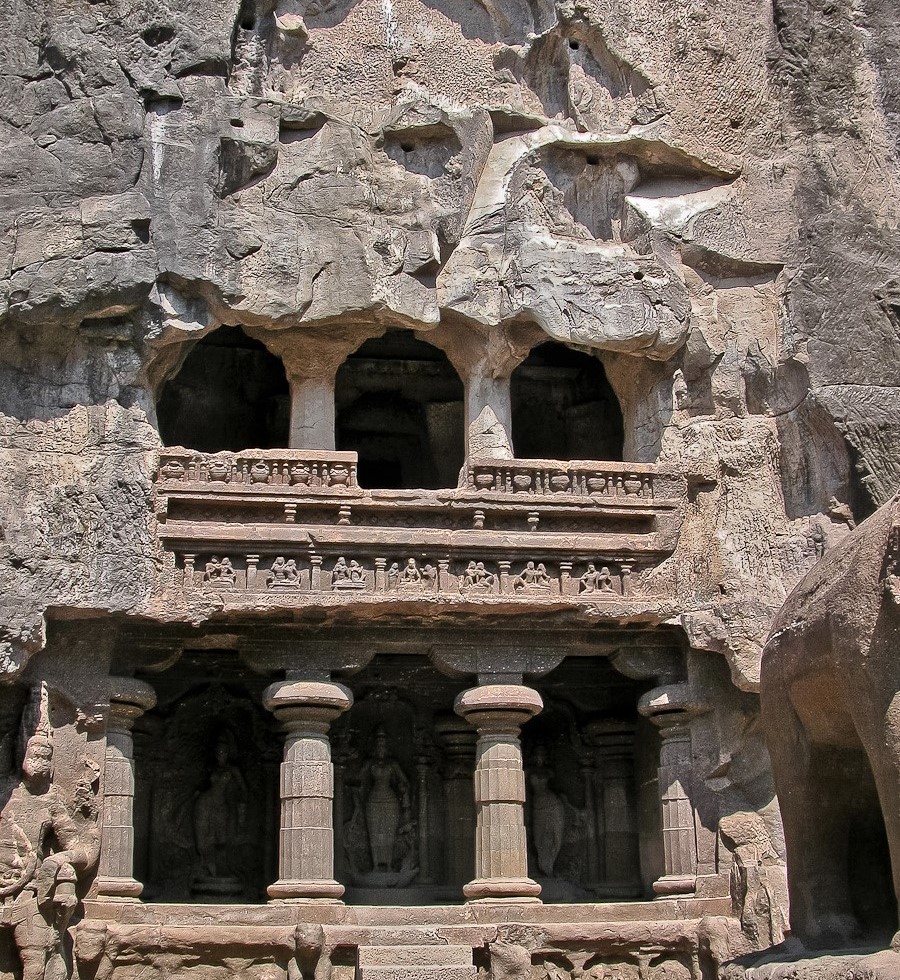 The temples of Ellora are a true diamond of ancient Indian art and architecture, which are still the subject of debate among scholars. It is impossible to explain how such a huge complex was built in ancient times. In the caves of Ellora there are 34 temples belonging to three religious cults: 17 Hindu, 12 Buddhist and 5 Jain temples. 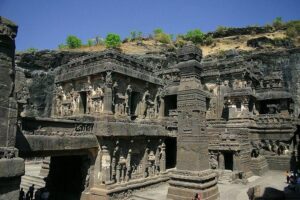 The centerpiece of Ellora’s architectural exposition is the Kailash temple, Kailasanatha, one of the most mysterious temples on the planet. Kailash is the largest monolithic complex in the world, carved out of a single rock. 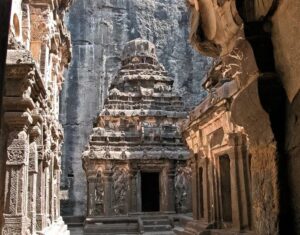 Grandiose monolithic rock Hindu temple “Kailash” – “Kailasanatha” is dedicated to the god Shiva and is named after the Himalayan peak, symbolizing the center of universe in Hinduism, Buddhism, and Jainism. 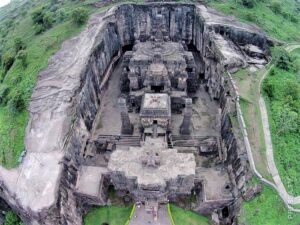 Carved like a sculpture in the monolithic rock, the temple consists of three stories. The rock mass was cut from the top down without any scaffolding. The temple, which measures 55 by 36 meters (1980 square meters) is located in the center of a 58 by 51 meter square cut into the rock, 33 meters deep. Inside the temple is the main shrine – a lingam, the symbol of Shiva. 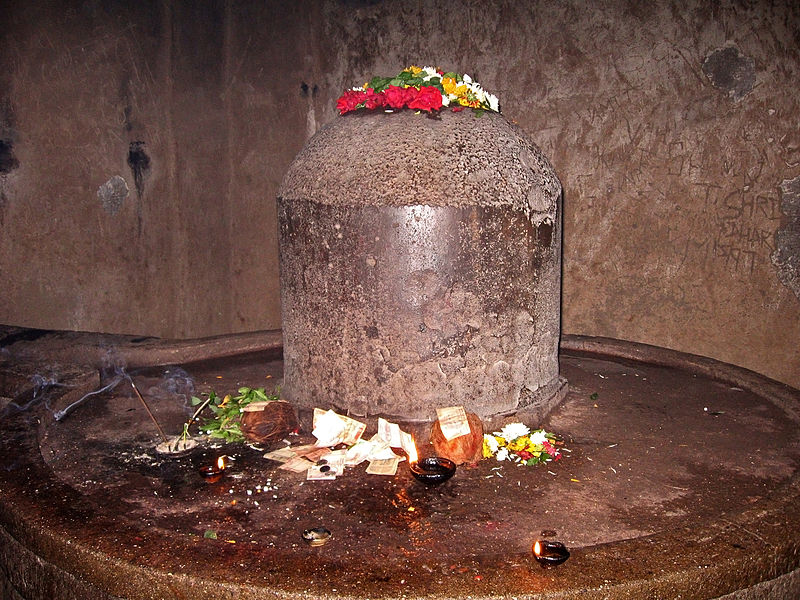 Academic science believes that the emergence of the cave temples of Ellora refers to the era of the state of the Rashtrakut dynasty, which in the 8th century united the western territories of India and created here the greatest state of that time along with Byzantium and the Arab Caliphate. Allegedly around 750, a grandiose construction began at Ellora. 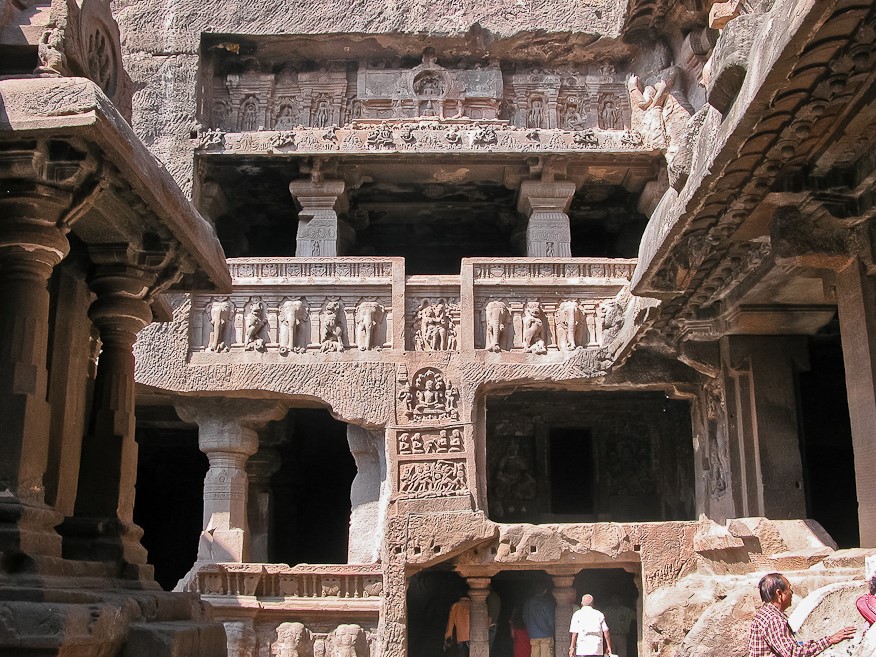 Originally the entire temple was covered with white plaster. The lower part of the temple is a pedestal 8 meters high, on which stand 3-meter sculptures of elephants and lions. Kailash temple is remarkable in that it is literally covered with very intricate stone carvings. The size of this rock temple is twice the size (and one and a half times the size) of the famous Parthenon in Athens. 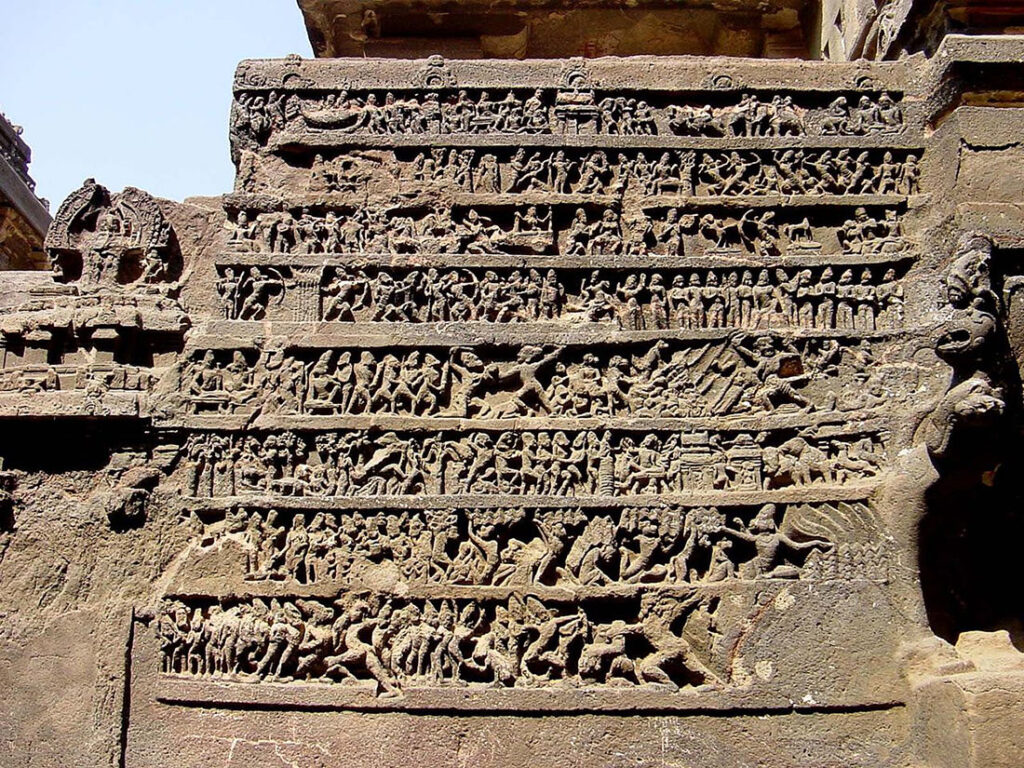 Experts have estimated that for the construction of Kailash it took 200,000 tons of rock and 7,000 workers for 150 years of work. 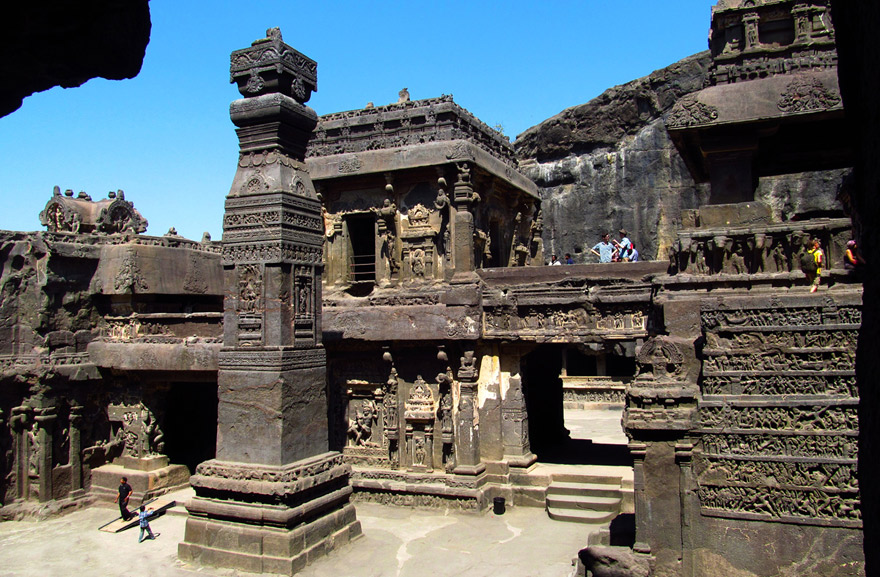 The temple is carved out of a single basalt rock. Nothing like it can be found anywhere in the world. Hypothetically, if such a temple were to be built today, it would require ten of the largest 10-ton mining machines. Moreover, if they were to excavate 1,000 tons of rock each under ideal conditions, one process of rock excavation would take about 200 days of continuous operation. The precision with which this kind of rock processing could be done is unattainable even with today’s technology. Thus, it would have required manual labor to carve the temple literally one centimeter at a time, so the time to create such a temple from scratch is even hard to imagine. One must conclude: the Ellora temple complex was built by an unknown, very advanced civilization in terms of technology! Kailasanatha is an unrivaled masterpiece and an impressive architectural structure – a fairy tale carved in stone!

In 1983 the Ellora Caves with the Kailash temple, Kailasanatha, was inscribed on the UNESCO World Heritage List.