Friends, am I boring you yet? I’ve got a lot of interesting things to tell you about Japan, write, ask questions, and I’m waiting for your feedback! In the meantime, let’s go to the south of Japan!

I visited an active volcano as it was erupting, learned why they sell Hawaiian shirts in souvenir shops, and stayed in the room where Boris Yeltsin himself stayed.

This time my daughter and I visited Ibusuki, a resort town in Kagoshima Prefecture. It’s famous for its hot springs: volcanic activity here is close to the bottom of the ocean. There are other thermal springs nearby, and just beneath the ground the normal and seawater mix. This creates a very mineral-rich mixture, which is supposedly good for health.

The sand is really hot, there’s even steam coming off of it! Do you see this haze? The water here is 40 degrees, like a bathtub at home!

And this is where they bury people! Yes, literally, they bury them: the Japanese lie down on these blue pads, and men with shovels fill everything but their heads with sand. This is done with black volcanic sand. It is enriched with the very minerals from the mixed waters and is believed to help improve health.

In fact, it is more like the usual heating, but the Japanese believe that it cures even rheumatism and stomach diseases! They lie like this for no more than 10-15 minutes: the temperature of the sand is very high and it may not feel good.

Ibusuki has its own little Fujiyama (volcano Kaimondake), which is the background for everyone’s photos. Now the Chinese are taking pictures – you can see them right away. If they are shouting, waving their arms, fussing and smoking nearby, it’s them.

The lighthouse is on the southernmost point of island Japan.

And the southernmost railroad stop in the country. Railroad fans from all over Japan come here very often. Some of them know by heart the schedules of various trains (they are huge volumes of 300-400 sheets) and can tell you with closed eyes which train at which stop and what time it stops. For them, this point is a kind of marker, which is honorable to visit, but the Chinese are not very interested in this place.

There is a special mailbox here. It is believed that if you send a letter from here, the reader will get a lot of positive emotions. The name of the box is “Yellow Letterbox” or “Lucky Box”. The Japanese are very shy, and it is very difficult for them to say to a loved one, for example, “I love you”. So they write it in letters, pour out their feelings and positive emotions there, and the reader really gets it.

This green pig is a local mascot and symbol. His name is Guribu. Every town and even district here has its own mascots – it’s a popular Japanese thing. Mascots are also produced as souvenirs.

The most beautiful view of the mountain. That’s where you have to take pictures!

Stores of Hawaiian clothes are here since ancient times. If today the main Japanese resort is Okinawa, after World War II Okinawa was closed: there were American bases, and the Japanese could enter there only with a passport – it was difficult. So the main resort was here, in Ibusuki. And because the Japanese really like Hawaii (for them it is the perfect image of paradise on Earth), they created their own Japanese Hawaii here: they built Hawaiian-style hotels, greeted people with beads of flowers, and sold Hawaiian shirts.

They also sell American military uniforms for children here. As I said before, the Japanese admire American culture and even worship America as a strong power.

And here’s a very interesting warning:

The fact is that spies from North Korea often come here. Once there was even a major scandal: They kidnapped young Japanese and spied in Japan using their passports, and the kidnapped were taken to North Korea, where they forced them to teach future spies the Japanese language. So now everyone is watching the coast.

By the way, the tropical scenery here is very interesting. It looks more like some kind of Vietnam.

The souvenir store sells huge and very expensive sculptures made of Japanese cedar. Such an eagle costs $58,000! Like a car.

And this is the city of Kagoshima. Of course, buses with Chinese tourists.

There are a lot of them, and they come in groups like this.

This is the local volcano Sakurajima, which erupted 637 times last year alone! That is, twice a day. And now in the photo volcano is also erupting. Periodically spits out puffs of ash like this – yes, not as colorful as you imagined.

But here are the stories of its most massive eruptions and their aftermath. The volcano has buried entire villages.

Once it buried a gate. This concrete structure used to be a gateway to a temple. You can see to what level they are buried in ash.

And there it is! Sakurajima Volcano!

Everything about its eruptions is on this island. More precisely, it’s now a peninsula: the volcano recently erupted once again and turned the island into a peninsula, which now has a road. But still, the main way to get here from Kagoshima is by ferry.

This is already a typical Japanese village in Kagoshima.

In front of you is a deserted selling point, and I don’t mean vending

In this black cabinet there are different items for sale, and to buy them you have to put 100 yen (50 rubles) in a white box and pick up the item from the open shelf. This option probably only works in Japan, in our country this business would be unprofitable.

There is an urban Japanese restaurant in this village in the ravine. It was the first place in Japan to make cold noodles, a local delicacy that is eaten in the heat.

It is very convenient that in Japan at the entrance to every restaurant there are exact models of dishes that do not differ from what will be served. We’ve only just begun to do this in our country, but in Japan it’s ubiquitous.

Museum of the “Gods of War.”

Japan, which lost World War II, is still very reticent about its history from 1931 to 1945 – there is not a single state military museum in the country whose exhibition would cover that period. But in the heart of Tokyo, on the grounds of the scandalously famous Yasukuni Shrine, there is a large non-state military museum devoted to Japan’s military history before 1945.

Even many people far removed from Japanese history know about Yasukuni. Founded in 1869, this temple honors as gods over 2,600,000 people who died for the Japanese Empire from the mid-19th century to 1946. War criminals executed shortly after the war are also honored here, something that is painfully perceived by countries subjected to Japanese aggression during World War II, so diplomatic scandals periodically flare up around the shrine. Yasukuni is also a center for nationalist agitation, which angered anti-war groups in Japan and also led to conflicts. For most Japanese, however, Yasukuni is a place of religious worship of fallen warriors. 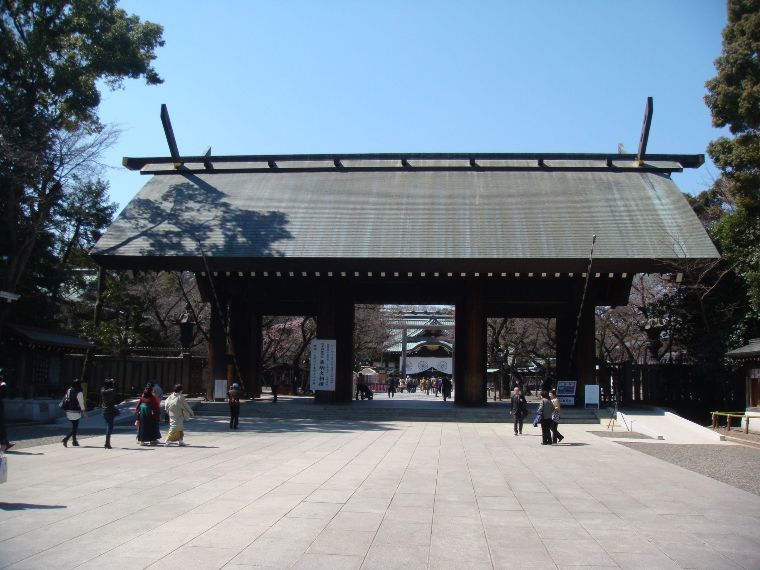 The main gate of the Yasukuni Shrine. Photo by the author 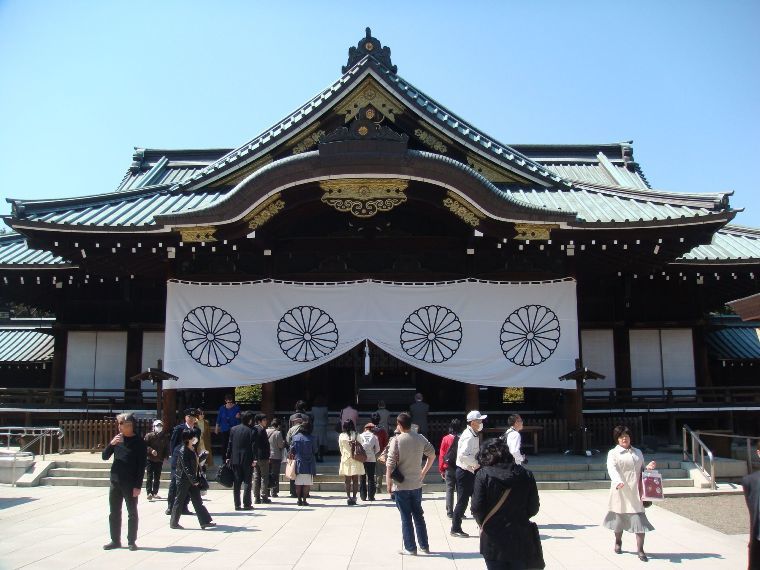 A queue of people wishing to pray at the haiden (main temple building). Author’s photo 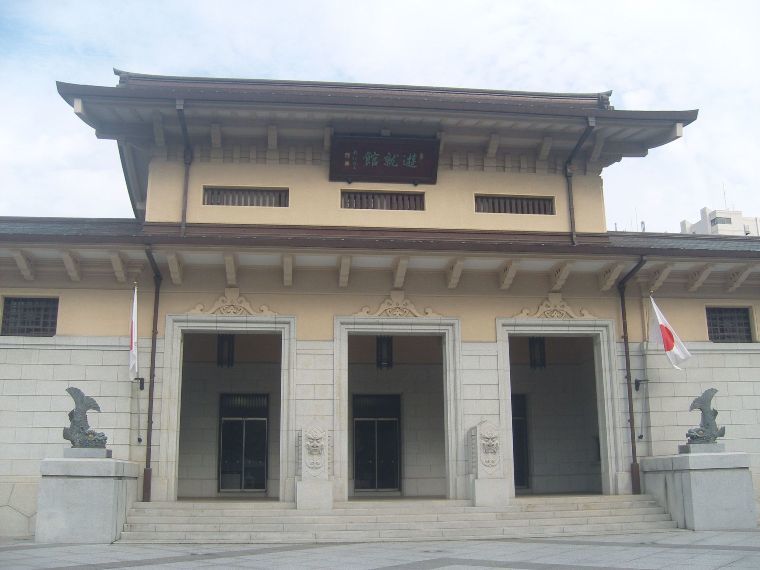 The Yusukan building, a view of the former main entrance to the museum. Author’s photo 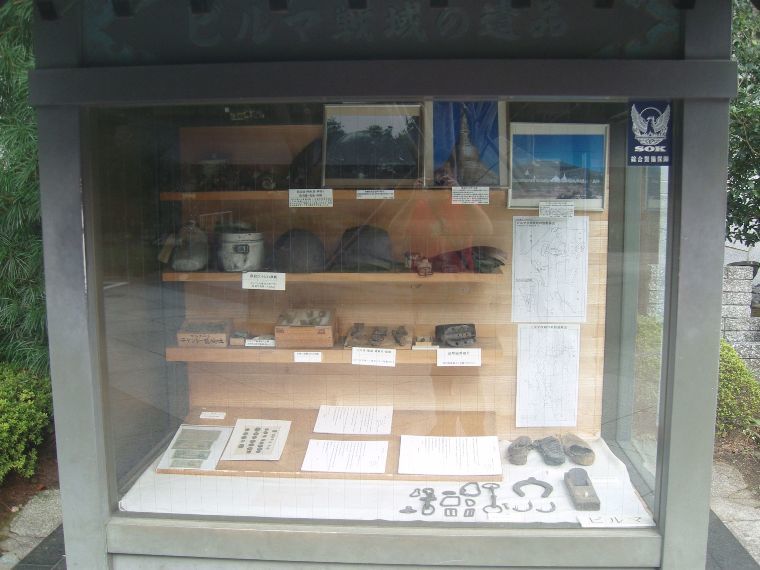 Fresh finds from the battlefields in Burma are displayed in a special showcase on the wall of the museum. Yusyukan does not stop adding to his collection. Photo by the author

READ
Roman Museum of the Soul in Purgatory, photo and description

In 1882, the Yusukan Museum was opened on the territory of the temple, which exhibited objects related to the fallen soldiers of the Japanese Empire. The museum was organized on the European model and was housed in a special building, also built in the European style. Yushukan is considered one of Japan’s first classical museums, and today its collection consists of more than 100,000 items.

Unfortunately, the old museum building did not survive the terrible Tokyo earthquake of 1923. The new Yushukan building, which was designed by prominent Japanese architect Itoo Chuyuta, opened in 1932. Its massive features are still a reminder that one of the important tasks in the design was to ensure a high seismic resistance of the structure.

In 1947, the U.S. occupation administration closed the Yushukan as part of a campaign against the glorification of militarism. The museum building was leased to an insurance company, but the temple managed to save a significant number of exhibits. As time passed, the aversion to wartime was slowly being replaced by nostalgia. In 1961, part of the Yasukuni office space was set aside for the “Museum of Shrine Relics” – and there were simply no non-military exhibits in the temple. In 1980, the insurance company moved out of the Yusukuni building, and influential Japanese businessmen began collecting donations to rebuild the military museum. After several years of work repairing the building and forming an exhibit, the Yushukan reopened its doors on July 13, 1985. The last major reconstruction of the museum was completed on July 13, 2002, when a new entrance hall was opened – samples of machinery were moved there from under the open sky. Today the museum building consists of three parts: the entrance hall, the permanent and temporary exhibitions.