Steppes of Kazakhstan for travelers

A huge plain, long ago overgrown with dry grass, merges with the clear sky at the edge of the horizon. The Kazakh steppe is part of the Great Steppe that runs along the whole of Eurasia. The territory, where empires were built and destroyed, thousands of nomadic tribes passed through, life was born and death reigned.

The Great Steppe of Kazakhstan holds the memory of the history of Tartaria. A sense of freedom and lightness, which cannot be felt by looking at the pictures in the book. Only after seeing it with your own eyes you can find peace and freedom of feeling in this place. What can be more wonderful than to set off on a journey across the vast Kazakh steppes? Take an unforgettable tour, visit the incredible places of Kazakhstan, take pictures and collect fossils that are millions of years old. For this you should visit the country of nomads!

From this article you will learn about the history of the steppes of Kazakhstan, their flora and fauna, the weather and the best time to visit these places

What can you imagine when you hear the word “steppe”? Kilometers of dry grass and thorns, hard earth and a lot of dust? In fact, the vast territory, almost 700 km wide, is so diverse that the paths of stone are replaced by grassy rivers, and then by poppy fields. The beauty is that these plains are almost untouched by humans. They don’t farm there, they don’t build houses. The steppe lives its own life, forming its own ecosystem of about 800,000 square kilometers.

Among other things, the steppe lands have their own history, dating back to prehistoric times. The lands contain ancient artifacts left by khanates and peoples over the millennia. The first tribes of the Turkic states lived on these steppes, afterwards the warriors of the Golden Horde and Genghis Khan were camped there, and later became “home” for the Kazakh Khanate. Since the union with the Russian Empire, the steppes of Kazakhstan began to belong to themselves. Archeological expeditions are actively carried out in the steppes of Kazakhstan – and the finds are amazing! There are petroglyphs (drawings on the rocks of ancient man), huge abandoned mosques, ancient palaces, the purpose of which scientists are still arguing.

Steppe vegetation is adapted to the dry, hot summer. It is able to survive without a proper supply of moisture. Many plants grow in Kazakhstan, unusual for us, the inhabitants of Russia. 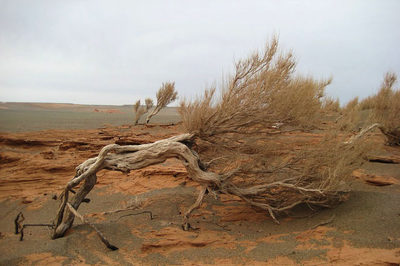 In the south of Kazakhstan it is easy to find saxaul (not to be confused with aksakal!). This is a thorny shrub or a small tree, from 1.5 to 15 meters high. Saxaul is very common in southern Kazakhstan. It is so abundant that entire saxaul thickets can be found. Its ability to grow in the arid steppe zone is very useful. 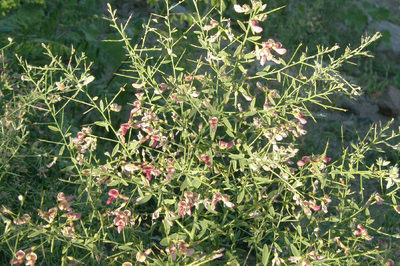 Another legendary plant is the camel’s thorn. An amazing plant that is perfectly adapted to life in arid places. At a height of not more than a meter, the root of the camel’s thorn reaches 20! And that’s, for a minute, the height of a 7-story house. The extra-long root makes it possible to get water even in desert conditions. 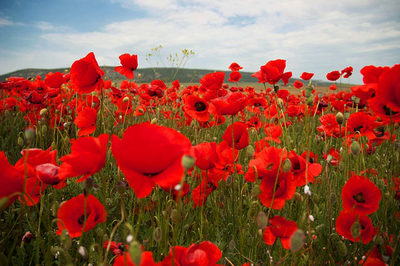 When the snow melts in the steppe in spring, the poppies awaken from their winter hibernation. Melt water penetrates the soil and vegetation grows vigorously. The poppies bloom in April and May, covering the area with a continuous purple carpet that goes beyond the horizon. 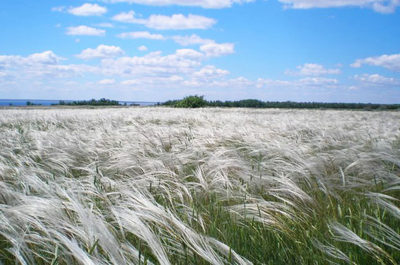 The most common steppe plant is feather grass. This hardy cereal plant is the main fodder for steppe herbivores. Not only wild animals, but also domestic ones. The endless green sea of the steppe is used by humans as pasture for sheep, horses, and camels.

From north to south the fauna of Kazakhstan also changes. Where vegetation is abundant, there are field mice, jerboas, gophers and steppe pestrels. Their skins are similar in color to the soil. This makes it possible not to be spotted by a steppe eagle or other birds of prey. On the lakes and rivers that cross the steppe in thin threads you can find beautiful birds: cranes, black larks, wild ducks, gulls and even flamingos. But the most incredible thing that can be found in the Kazakh steppe is a herd of wild horses. They are skittish, so they immediately rush on the run, raising a column of dust from under their hooves.

The best time of year in the steppe is spring and autumn.

If you are going on a tour around Kazakhstan, spring and autumn are the best times of year. This is the period when the weather is perfect – it is not too hot and not too cold.

After all, the steppe is a huge open space.

In summer there is no place to hide from the scorching heat, so the temperature feels very different. The hot southern sun, the heated earth, the complete lack of shade can make the walk quite excruciating, especially if you do not have a good supply of water. Additionally, the winds that roam freely on the steppe add to the thrill. In the summer, they heat up under the blazing sun and burn the skin, spreading sand and fervor around.

In winter, because of the sharply continental climate, the steppe can be quite cold. And the cold is much harder to bear than in other places. The wind pierces the body with cold, like a sharp dagger. Even with a little frost, unadapted to the steppe zone wayfarer risks a lot of freezing because of the cold gusts of wind. How does the temperature in the steppe differ from season to season? As an example, let’s take the weather on the Mangyshlak Peninsula, near the city of Aktau.

You have made up your mind to visit the natural and historical monuments of the Kazakh steppe. What time of the year is better to go? What weather to count on? Read more about it below.

The backside of the expedition: how we lived in the steppe

We have already talked about the roads of Kazakhstan and how we traveled on them. Now we want to tell you about how we lived in the steppe: choosing a place, setting up camp, cooking.

If everything is more or less clear with the hotels, and it is necessary to worry about parking in advance, then there are many nuances in the arrangement of the tent camp for 22 persons.

We set up our tent camps not only because of our desire to feel the romance of the expedition and the true trekking, but also because of the remoteness of the most beautiful places from the cities, where there are at least some hotels. And since we wanted to see the main points of the trip at both sunset and sunrise, it was logical to stay directly at them. The exception was an overnight stay at Ak-Kuduk, simply because the distance between the points was quite long, and we had to make a detour to refill our gasoline supply.

The first camp we set up on the Tuzbayir salt marsh, in its upper part, with a stunning view of the mirror of the salt lake below.

The second camp was at the Airakty castles, with grazing horses and the play of sunlight on the rocks, which Taras Shevchenko called “castles”.

The third camp – with a view of the mountain Bokty and the vast space in front of it.

The fourth camp – on a plateau with a fantastic view of the tract Boszhira and various geological formations.

The fifth camp, as already mentioned, as a forced measure near the village of Ak-Kuduk, and the sixth – in the southern part of the Ustyurt Reserve, on a plateau overlooking the Karynzharyk salt marsh and the “Three Brothers” cliffs.

READ
100 Most Beautiful Places on Earth

The seventh and final camp was our last night in Kazakhstan. We spent it under the starry sky of the Aktolagay mountain range.

Almost always we tried to put our tents closer to the rocks to have protection from the wind. The exceptions were the open spaces on the big plateaus with a view: Boszhira and Karynzharyk. We were ready to sacrifice comfort for the sake of the beauty, and some of our tents had their arches broken one night, despite the cars being set up in a circle.

Of course, the tent site had to be flat and the ground had to be such that a peg would go in there and hold firmly. We also looked at the dens – no one wants to be awakened at night by uninvited guests. That didn’t stop us from finding scorpions under our tents in the morning.

Most of the participants had their own tents. For the rest of us we had prepared big two-room four-man tents from SportMaster, the good news is that it’s easy to find a patch of flat ground for such a tent in the steppe. The rest of the campers had a variety of tents, from small ones for misanthropists to two-room tents for friendly families, so the camp looked rather motley.

The leaders of the expedition decided on a specific parking spot, and upon arrival everyone took out tents, sleeping bags and mats from the top trunks of their Dusters, and while it was still light, they gathered their lodgings. After that someone would run away to make photo-masterpieces, and the people on duty in the kitchen would start working on dinner.

Since half of our overnights were spent camping out, we approached the kitchen set-up question responsibly. In addition to the aforementioned tents, mats, toilets and showers, we bought tables, chairs and stools from SportMaster. We also equipped our camping kitchen with various utensils for cooking: cauldrons, pots, kettles, appliances, boards, graters, knives, and so on. And given that there is no firewood in the steppe, we used several portable gas stoves and several packs of gas cylinders.

With this kit we could afford to cook full dinners and breakfasts, and lunches were in snack format in order to save time. Breakfast usually consisted of porridge with jam or scrambled eggs, sometimes we even fried pancakes. Dinners were mostly canned (stew, steers) with pasta, rice, or buckwheat, but sometimes, when we could get fresh meat for the evening, there were more interesting dishes, such as chicken with pineapple, or beef with vegetables.

Olya volunteered to be in charge of the kitchen, for which she still receives praise from all members of the expedition. Before each camping she assigned helpers to carry out simple tasks, mainly to chop something in sufficient quantity for 22 people, to take out and hook up stoves, to prepare dishes. All the helpers are also worthy of respect and respect!