Kaziranga National Park is located in the state of Assam in eastern India. The park has been a UNESCO World Heritage Site since 1985.

Baroness Mary Curzon, wife of the Viceroy of India, made a great contribution to the founding of the park. On her initiative in 1905 the measures on protection of Indian one-horned rhinoceros were undertaken on this territory – the population of the species was on the verge of extinction due to hunting and poaching, and the legends about the vitalizing power of the rhinoceros horn powder also contributed to this. In the process of development the area of Kaziranga doubled in size, and the park managed to change several statuses: from “Protected Forest” to “National Park” almost 70 years passed. 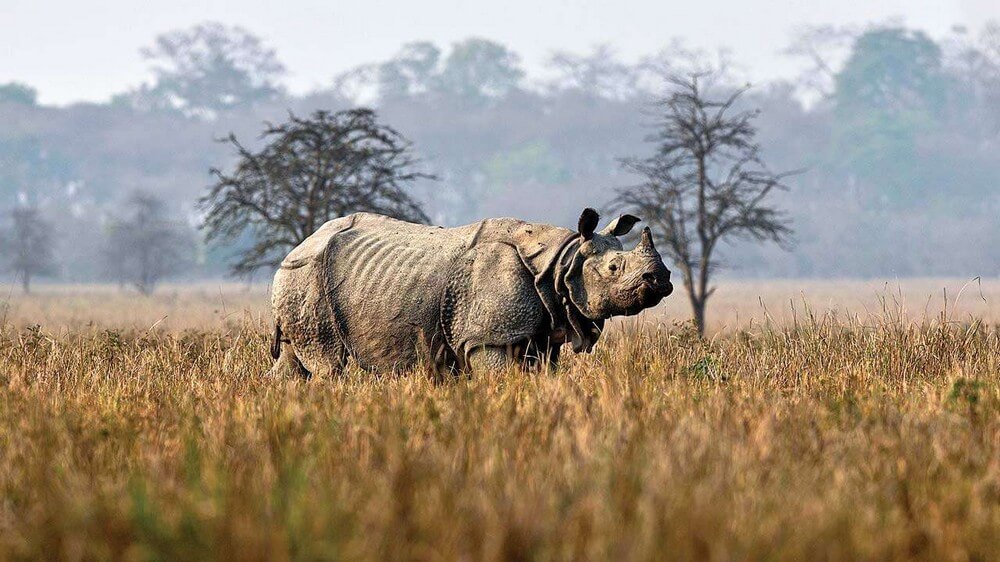 Geographically, the park covers a little less than 400 square kilometers and lies within two Indian districts: Nagaon and Golaghat. The water resources are very extensive as the reserve lies within the valley of the major river Brahmaputra, it is also crossed by the Diphlu and Mora Dhansiri rivers.

The topography is represented by plains, which are heavily eroded, uplands and lakes.

The climatic conditions are very typical of India. The climate is represented by distinctly alternating seasons: summer – rainy season – winter.

The hot season is very dry, lasting from May to March, and the temperature rises to 35-37 ° C. In June it is followed by a rainy season, which lasts three months, often during this period because of the abundant rainfall occur flooding in some areas of the park. The winter season is hardly cold, because the temperature rarely falls below +25 ° C.

Today’s park features tropical forests and lush flood meadows, but in its early history the reserve was subjected to massive logging and attempts to cultivate the soil to create tea plantations, so it was mostly lifeless swamps. 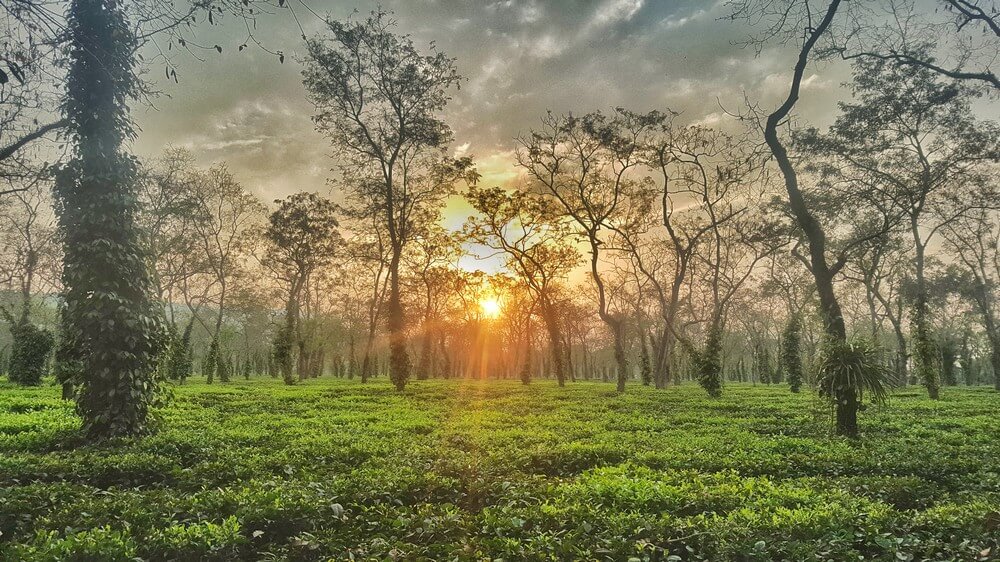 Now the flora of Kaziranga is more diverse than ever, and tea plantations still remain – on the periphery, besides, they bring considerable income for the development of the reserve. Most of the flora is represented by herbs. Elephant grass and some species of reeds are frequent; of trees and shrubs, one cannot but mention the woody carea (kumbhi), the Malacca tree (emblick) and the cottonwood tree – it forms the savanna forests.

The fauna of Kazirang is very diverse: in one area there are many rare animals, most of which are endangered. The cause started by Mary Curzon continues, and continues successfully, because the population of the unicorn rhinoceros in Kaziranga is now the largest in the world with 1900 individuals, that is 3/4 of the existing representatives of this species on the Earth. 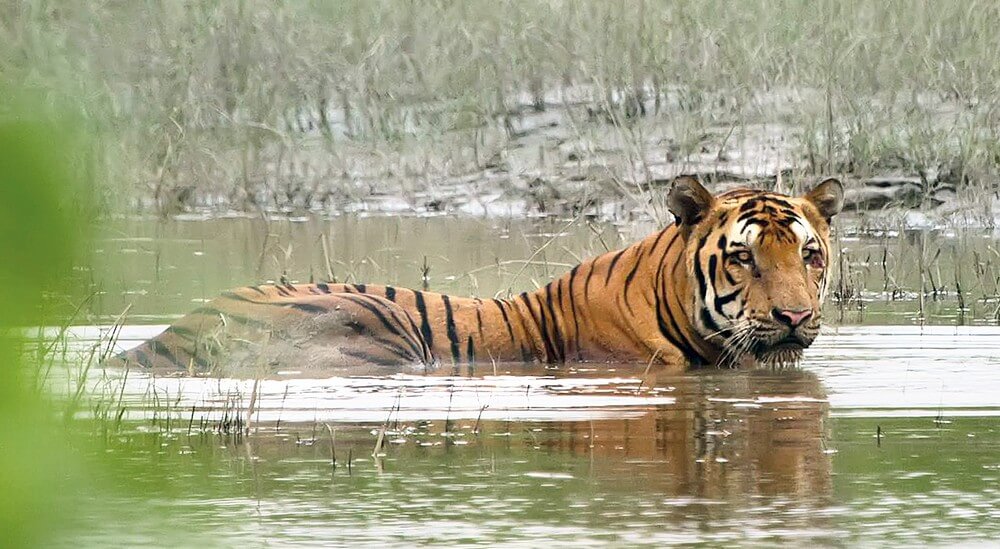 All animals living in the reserve are unique. Many of them are endangered:

This amazing place is a sanctuary not only for rhinos, but also for tigers. Primates (Assamese macaques, hooligan gibbons) and reptiles (Indian and king cobras, Bengal varans, Assamese tortoise) make up the bulk of the fauna. 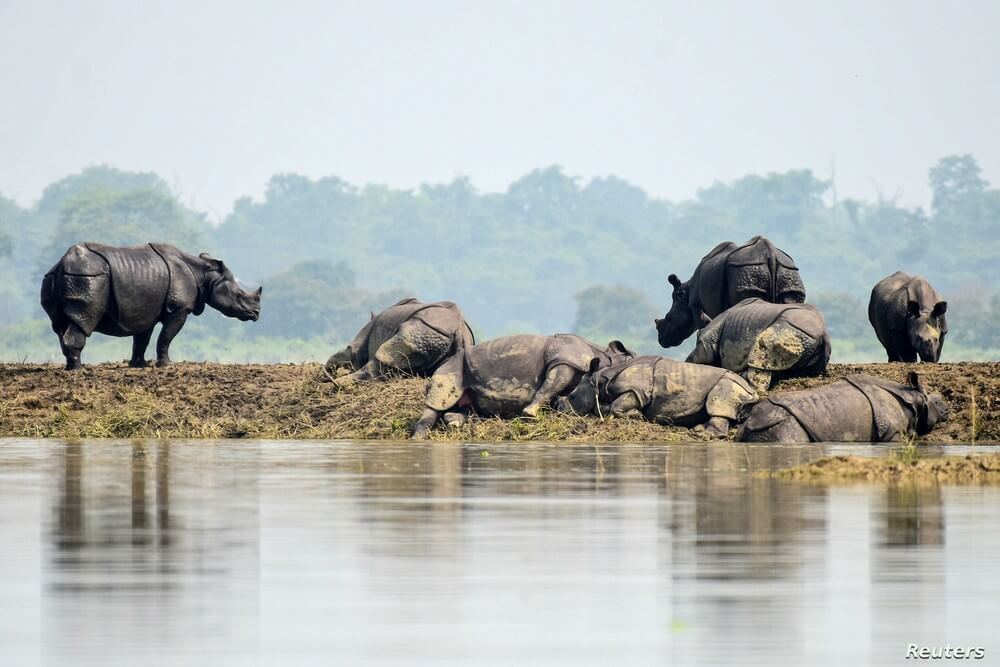 The park is also interesting for ornithologists, because rare bird species such as the Dalmatian and spotted pelican, the black-breasted parrot, and various species of weaver live here and come to overwinter.

The park is well suited for tourism: independent hiking is prohibited, but group tours with experienced staff, jeep safaris, elephant rides, tourist areas around the reserve – everything that will make the trip diverse and memorable.

Kaziranga National Park is an amazing place where everyone can admire the variety of forms of nature. 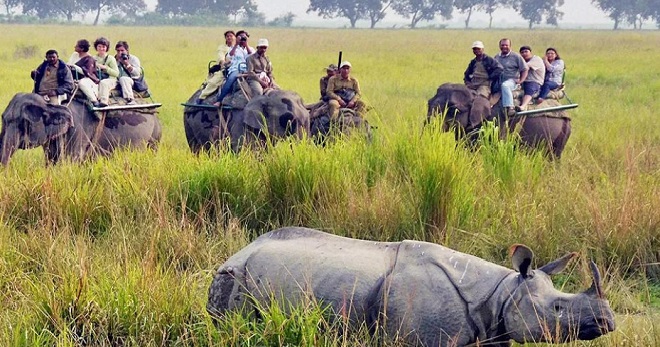 Kaziranga National Park is located in eastern India, administratively part of the state of Assam. Established in the early twentieth century, it is a closed ecosystem, one of the few on earth where a population of large mammals has survived.

Originally the Kaziranga was a wild savannah, but over time tea plantations began to be established around the future park, and a railroad line was planned to run nearby. Under public pressure and with the support of the wife of the King of India, Mary Curzon, it was decided to leave the land untouched and establish a national park with the main goal of preserving the population of the rare species of rhinoceros. After 10 years Kaziranga became a nature reserve and a national park in 1968. 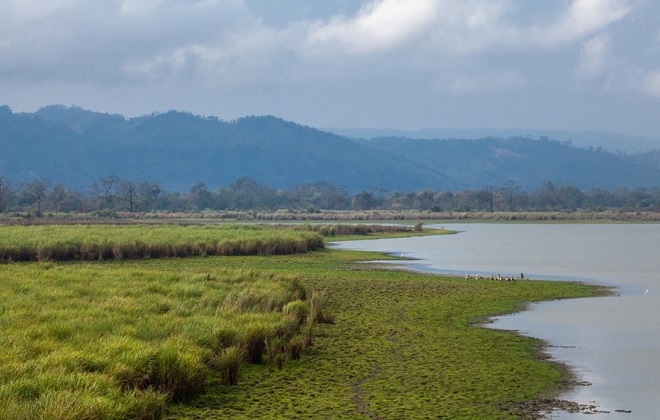 Kaziranga is located in the valley of the Brahmaputra River. Half of the park’s territory is evergreen meadows with grass up to 4-6 m high. The landscape is mostly formed by alang-alang (refers to cereals), sedges, and sugarcane. These three plants are called “elephant grass” in India.

In the Brahmaputra Valley, floodplain forests alternate with sparse forests and evergreen jungles. Trees are lined with vines, and bromeliads and strangler ficus hang from their branches. The total area of the area is 688 square kilometers. 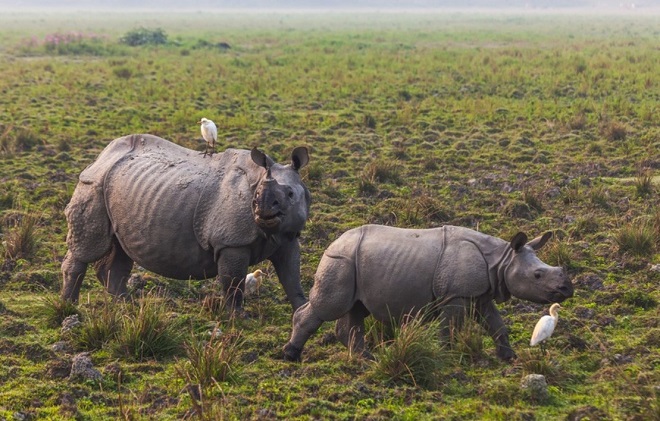 Animals in the park

Kaziranga is home to:

In total, more than 30 species of mammals (15 are endangered), birds, 40 species of turtles, and a large number of lizards and snakes live in Kaziranga. 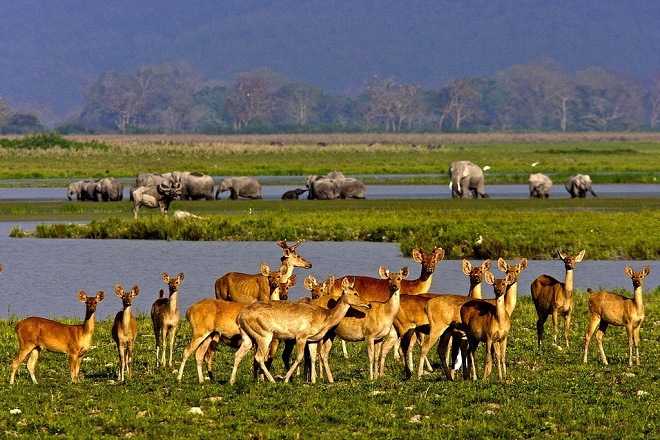 Rules of visiting the park

You can enter the protected area only in an organized group, because almost all wild animals living here pose a danger to tourists. Travelers are guarded by specially trained guides, who instantly react to the approach of elephants, tigers or rhinos to visitors.

Armed rangers do not allow single tourists to enter these lands and can open fire if they see even a tripod from a movie camera in the hands of an unwelcome guest.

READ
Park Guell in Barcelona, How to get there and description

Visiting the park is allowed from mid-October to mid-April. If poachers manage to shoot a rhino or rangers manage to shoot a poacher, the park is closed for a month. It happens that the reserve stops operating indefinitely, so few people organize commercial tours here. Photo safaris in Kaziranga are best taken in February, when the grass is not yet too high and the animals are well visible.

There are two tours available: the standard jeep safari and the elephant ride, which starts early in the morning at around 5:00 and runs until 7:15. 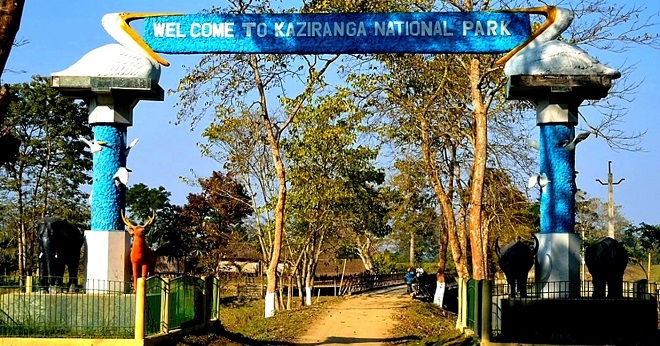 There are no direct flights to the park, so you can get here from Delhi by transit – first to Guwahati and then by bus or train to Jharkhat. It is not possible to reach Kaziranga by car during the rainy season – the traffic on the main roads is difficult or impossible.

UNESCO World Heritage 0
The Loire Valley and its Chateaux, France Château de Chambord The castles of the