The Kegon waterfall (the Japanese call it Kegon-no-taki) is located 500 meters from Lake Chuzenji in the National Park of Nikko near the city of Nikko, Tochigi Prefecture, Japan.

The waterfall is in the bed of the small and only Daiyagawa River flowing from Lake Chuzenji, and consists of the main, most noticeable, waterfall and more than a dozen other modest waterfalls. They are located behind and on the sides of the Kagon Falls. The waterfalls practically seep through numerous cracks between the mountains and frozen lava flows.

Kagon Falls are 97 meters high and up to 7 meters wide. 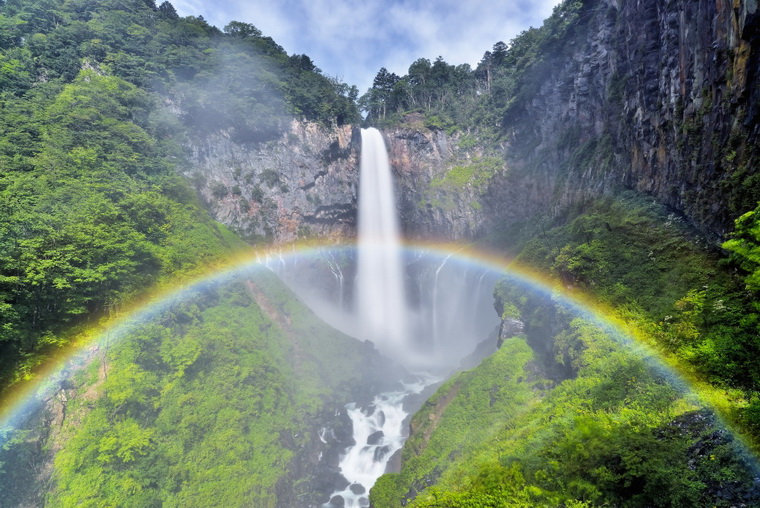 It is believed that the discoverer of the waterfall was the priest Shodo, who founded the Rinno-ji Temple in the Nikko region back in the 8th century. The name “Kegon” comes from “Kegon-kyo,” one of the Buddhist sutras.

The structure of the waterfall and the beautiful scenery around it make it not only the highest in the area, but also one of the most beautiful in Japan. It is one of the three famous waterfalls in the country, along with Nachi Falls in Wakayama Prefecture and Fukuroda Falls in Ibaraki Prefecture.

How Kegon Falls came to be

Scientists speculate that Kegon was formed when the flow of the river was blocked by lava flows. Now gradually at a rate of 1.5 to 2 cm per year, grinding through the volcanic rocks, the waterfall is approaching Lake Chuzenji.

Don’t miss Shiraito Falls. It is not as high as Kagon. Shiraito is more like a multitude of white strands flowing straight out of the ground. It’s a very appealing sight.

In the fall, the trees around Kegon Falls are especially beautiful. They are painted in incredible colors, from light yellow to bright red. It creates an incredibly serene and nerve-soothing landscape. At this time, traffic even slows down on nearby roads that overlook the waterfall. Drivers slow down and some stop to enjoy the view, since it is no secret that Japan has a busy schedule and rarely has time to contemplate the beauty.

READ
Hukou is the largest yellow waterfall in the world. China

Unfortunately, this is not the only thing Kagon Falls is famous for.

The sad fame of the waterfall is brought by suicides, which in this beautiful country for some reason more than in other countries.

The first was Misao Fujimura, a student and poet of Japanese philosophy. On May 22, 1903, at the age of 17, he threw himself off the top of a waterfall. Thus he ended his life’s journey across our beautiful and unique planet. The reasons that made him commit such, in our opinion, quite unnecessary act, the young man wrote directly on the trunk of the tree in his farewell poem of death.

The event turned out to be a sensation for the local newspapers, which vied with one another to write articles about it. Thus Cagon Falls also gained tragic fame.

Later, the Werther herd effect drew lines of other people who wished to part with their lives.

The Werther effect is called the herd instinct of suicidal people who commit suicide in places where suicide has already occurred. This often happens because of the media. They spread information about such events. That is, the media almost subconsciously sends the next suicidal person to the site of the first suicide.

If you have read everything written above, it is clear that Kegon is a popular attraction in Japan. 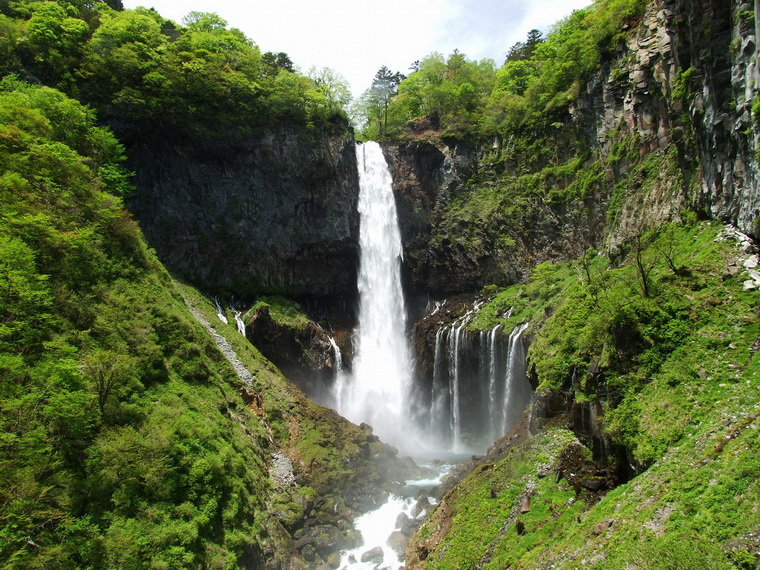 Now there is all the necessary tourist infrastructure. There are paths and observation decks. There are free platforms, which are easy to reach on foot, and a paid one directly near the waterfall. There is an elevator 100 meters high. The cost to visit this site is 550 yen.

Kegon Falls is a short walk from the Chuzenjiko Onsen bus station. If you go by car, take the No120 road to the above station. There is a large parking lot next to it. It’s also a few minutes from there to the waterfall. 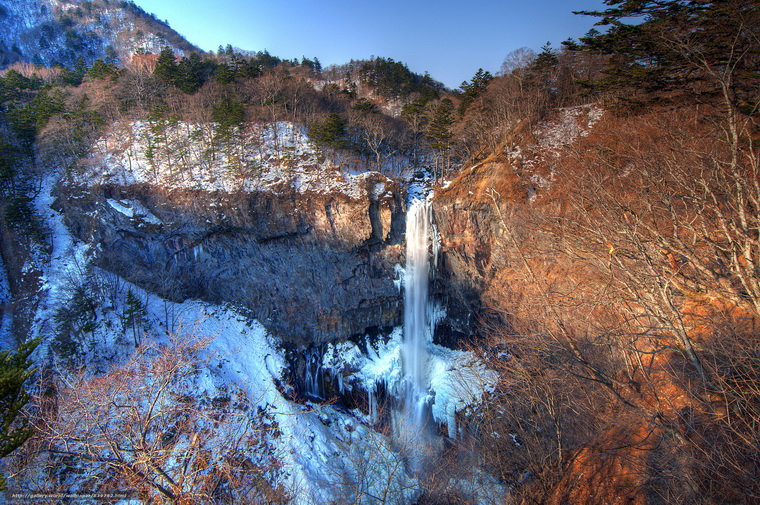 Kegon Falls is the most famous waterfall in Japan. Along with other attractions of one of the oldest religious and pilgrimage centers of Japan, Nikko, it has been included in the UNESCO list. 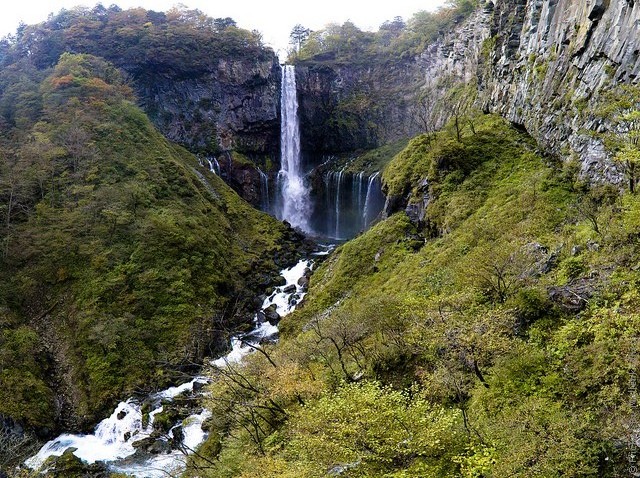 The waterfall is located in the beautiful Nikko National Park, on the Daiyagawa River, which rises from the eastern part of Lake Chuuzen-ji.

It is a popular tourist destination. It is hard to ignore the town of Nikko, namesake of the park and located just 135 km from Tokyo, when it has so many attractions.

The Shinto shrine Tosho-gu, the Edo-mura amusement park, the botanical garden, and the unmatched mountain nature attract travelers all year round. On the shore of Lake Chuuzen-ji, formed by lava flows, there is an entire town with a developed infrastructure: hot springs bathhouses, yacht clubs, restaurants, and souvenir shops; it is also a popular summer resort and a favorite place for fishermen. The sad romantic stories of suicides among unhappy lovers also make Cagon especially popular.

Leaving the lake, the waters of the Daiyagawa River rush down a high lava step to form Kegon Falls, 101 meters high. On the sides of the main stream there are twelve more jets flowing through cracks. Scientists estimate that every year Kagon approaches the lake by 1.8 cm.

At the foot of the waterfall there is a tea house and an elevator that allows tourists for a small fee to appreciate the beauty of Kagon. Flooded from April to November and transformed into a fairy tale ice in winter, Kagon leaves no one indifferent. It is considered one of the three most beautiful waterfalls in Japan along with Nachi (Wakayama District) and Fukuroda (Ibaraki District) for a reason.

READ
The Pillar of Katskhi and the Church on the Rock. Imeretia. Georgia

Photo of the Kagon Falls 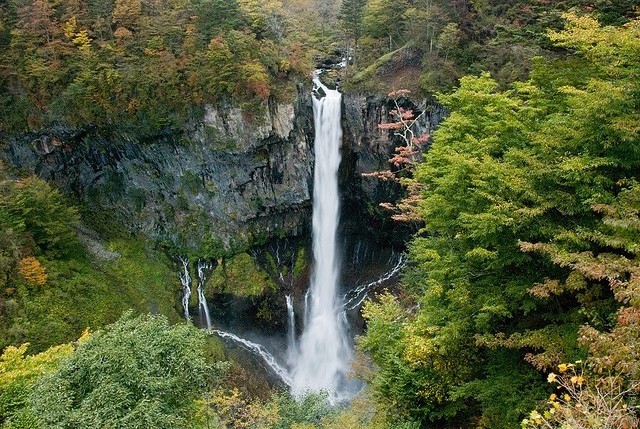 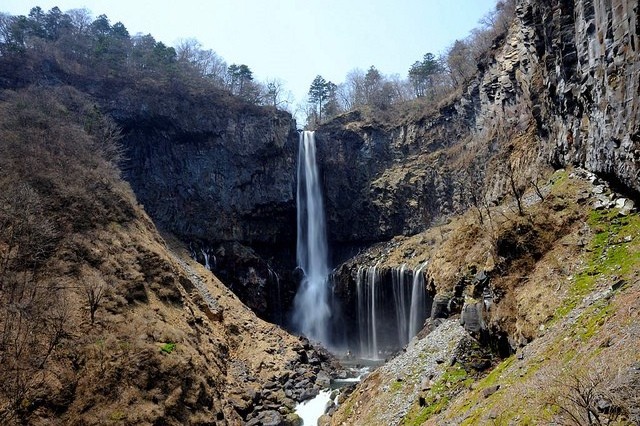 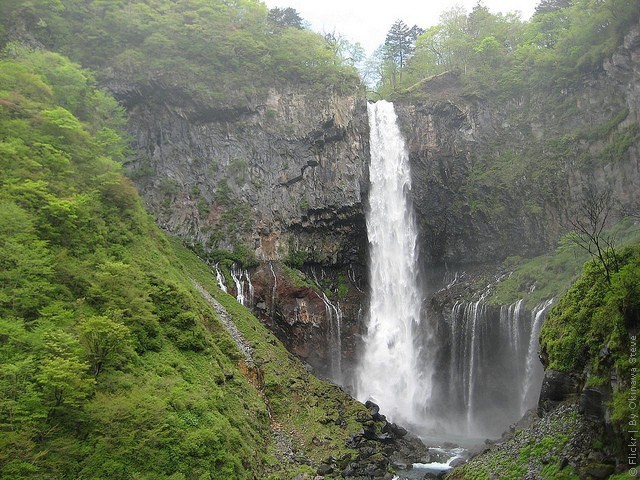 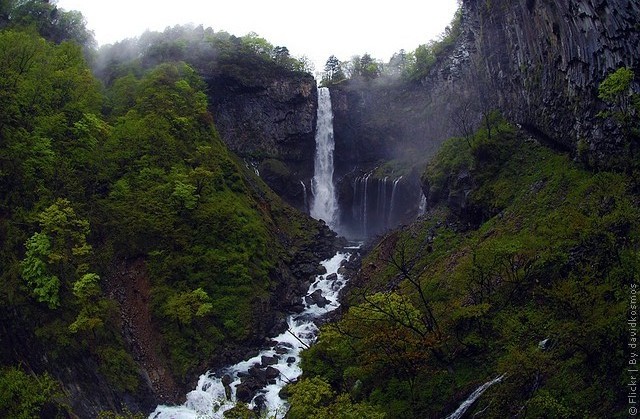 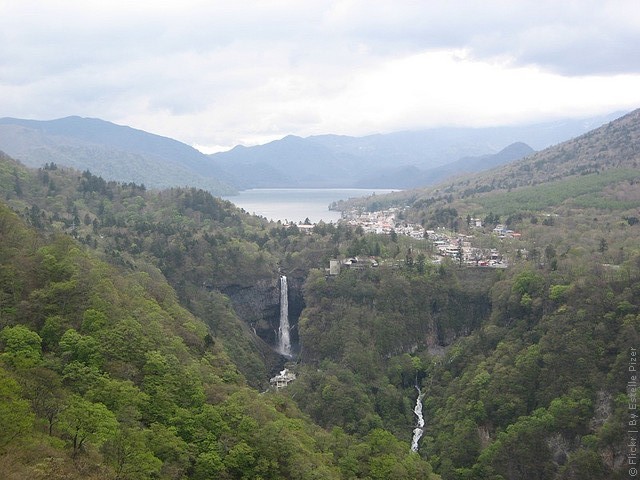 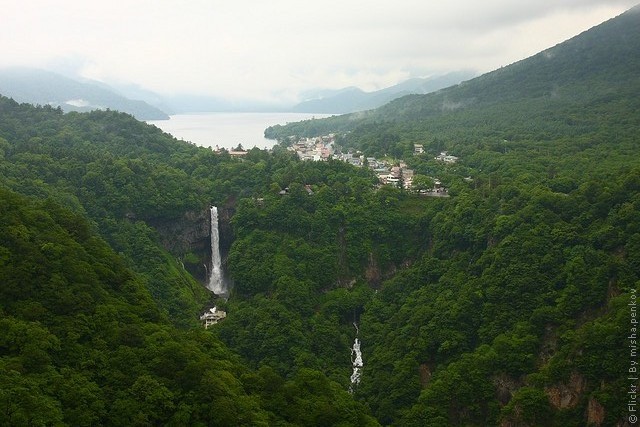 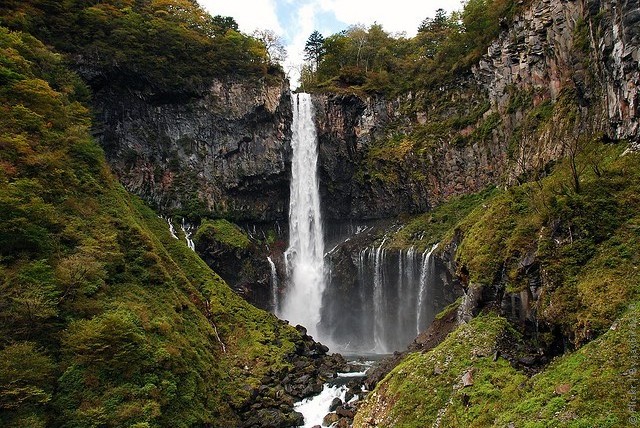 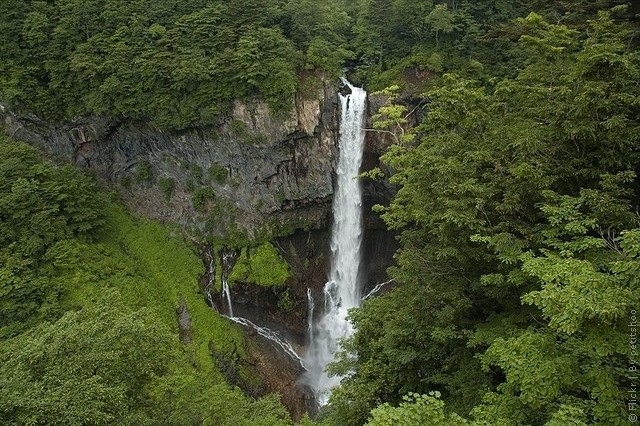 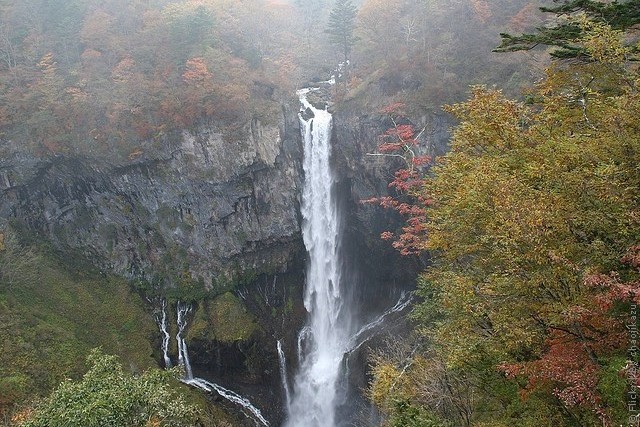 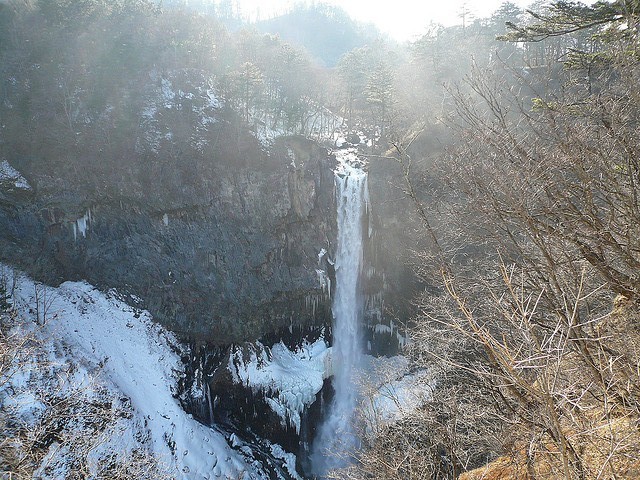 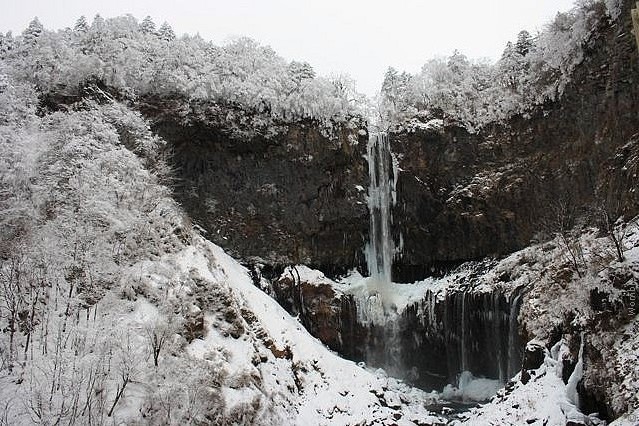 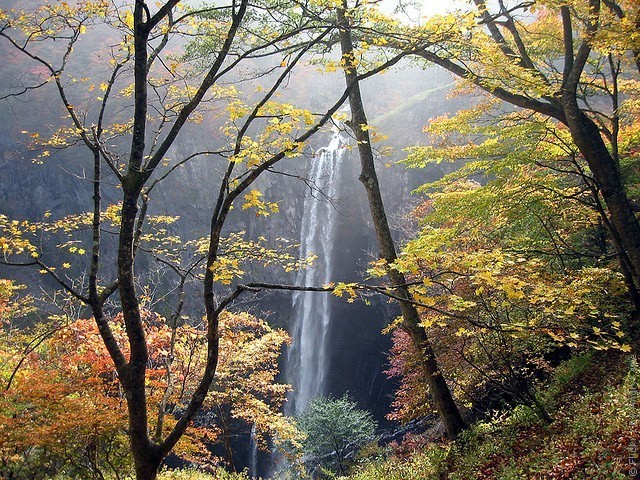 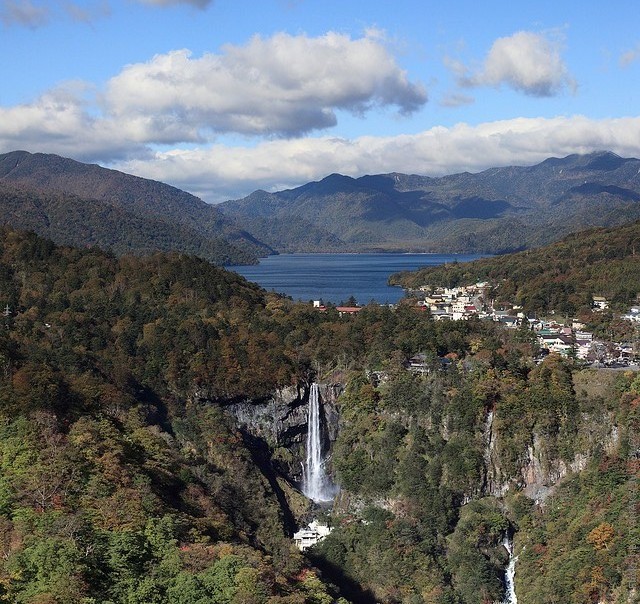 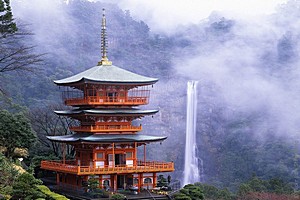 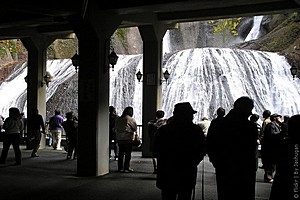 Fukuroda Falls is a popular tourist attraction that attracts thousands of people during the season. It is . 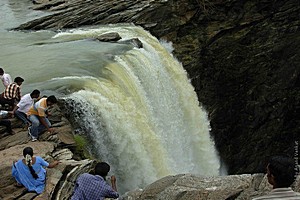 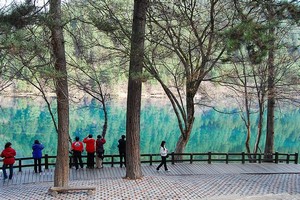 Jiuzhaigou National Park spreads its magical scenery in Sichuan province, which is located in the southeastern 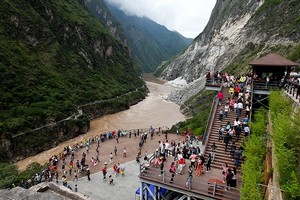 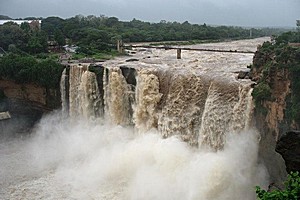 Waterfalls are undoubtedly one of the most beautiful natural attractions of our planet. They attract with their power,