The island of Kekova belongs to Turkey and is located near the mainland, 25 km east of the city of Kasha. In ancient times, the island was named Dolihiste, but today it is often referred to as Karavola. Kekova has an area of 4.5 km² and is separated from the mainland by a 0.5 km wide strait.

Kekova Island is considered a historical and natural monument. A trip through it is included in all yacht tours along the coast of Turkey. Tourists from all over the world come here to admire the beauty of nature and see the ruins of ancient Lycian cities.

Today, Kekova Island is uninhabited and inhabited only by feral goats. There are three settlements on the mainland: Uchagyz, Kalekoy and Aperlai. In ancient times, two of them were the site of powerful Lycian cities. On the northern part of the island there are ruins of the ancient city Dolihiste. They are found on the shore and in the sea, at shallow depths.

To see the ruins spend a day tour. Journey around the island lasts about an hour. The route runs along the coast – the places where the ancient ruins are preserved. Do not count on stores or entertainment centers: they simply do not exist.

In connection with the protected status, stay overnight on the island of Kekova is forbidden. Tourists who plan to spend a few days exploring the ancient ruins are accommodated in the villages on the mainland. At their disposal are several good hotels and private guest houses. True, the hosts are more willing to accommodate overnight travelers without children. Families with children need to arrange accommodation in advance.

The people inhabited the island of Kekova from very early times. In II century A.D. the town of Dolihiste which stood there was destroyed by a strong earthquake. As a result of the natural disaster, some of the urban constructions were submerged and the island became uninhabited.

READ
Sakhalin: what to see from the sights

Initially, Kekova island was under Byzantine rule. Then it was attacked by the Arabs, and in the XIII century – the Turks. When the territory was conquered by the Ottomans, several villages appeared near the island, on the mainland. After World War I, Kekova became a dispute between Turkey and Italy. During this period, people lived here who were engaged in felling trees. In 1932, the territory was finally ceded to Turkey.

In 1990, Kekova Island itself and the large area of water around it were declared a closed, protected area. The places that border the villages Uchagyz and Kalekoy, as well as the four ancient cities – Dolihiste, Aperlayi, Simenu and Teymussu – were first completely closed to diving and visiting, but later this ban was partially lifted.

Surprisingly, no large-scale underwater archaeological research was conducted near the island. Only the team of Jacques-Yves Cousteau was able to find the remains of an ancient ship that sailed along the coast back in 1300 BC.

Most tourists get to the island as part of excursion groups. The popular tour “Demre – Mira – Kekova” is sold in all the tour agencies located on the Anatolian coast of Turkey. During the 10-hour trip, tourists visit the church and tomb of St. Nicholas, the ancient ruins of Mira, and take a boat trip to the island of Kekova.

The excursions include learning about the history of these places, exploring ancient ruins, snorkeling and diving. The sea water is very clear, so you can clearly see the bottom, schools of colorful fish and other inhabitants of the Mediterranean. Experienced divers are offered special programs on underwater excursions and hunting.

To admire the submerged ruins of the ancient settlement, you do not have to wear scuba gear. Most travelers see the sights of Kekova Island from the boats, which have a transparent bottom. At a depth of up to 6 meters you can see the remains of stone columns, paved streets, marble stairs, harbor shipyards, some amphorae and fragments of majestic statues. They have all been under water since the famous earthquake.

It should be borne in mind that one can see all this beauty only in the calm calm of the sea, and a boat with a glass bottom must go slowly. From ordinary boats, which raise the wave, it is almost impossible to see the ancient ruins in the water.

Many tourists come to the island by boat and are limited to walking around Kekova. On the site of the former city are the ruins of houses and public buildings. Here you can see Lycian tombs with roofs, the foundations of an early Christian church and a stone staircase leading to the sea. Travelers who find themselves near the ancient ruins for the first time are very impressed by them. The local people leave shards of stones and clay crocks on the beach for the tourists to keep them from “taking away” the pieces of the ruins.

The nearest airport where the planes come from Russia is in Antalya. This is about 120 kilometers from the island of Kekova. From Antalya to Kash tourists get by regular buses. From the city pier to the island of Kekova runs a ferry. It runs from May to October. The trip to the island takes an hour and the fare is 35 Turkish liras for a round trip.

Some travelers prefer to rent a boat in the coastal villages and come to Kekova with a guide. The boat trip is more interesting than the tourist-filled ferry and is not much more expensive.

The sunken city of Kekova 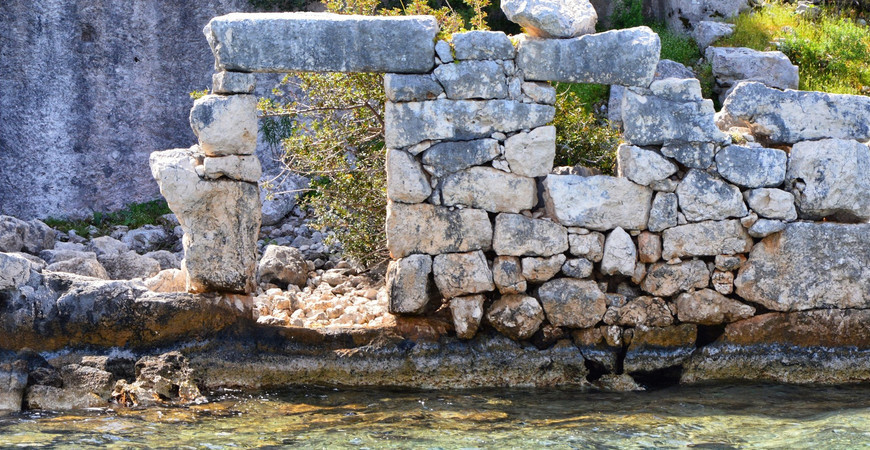 Turkish Kekova Island (also called Karavola) is a very picturesque place. Causes genuine excitement among tourists with its sunken city of Simeon (during the Lycian period the city was called Dolihiste). Nowadays, this ancient ruined city and the island are often referred to by its common name, Kekova.

The island is one of the main attractions of the country and is a small piece of land, which is washed by the Mediterranean Sea.

The island is now uninhabited. But to its shores are regularly organized excursions.

Tourists discover the mass of archaeological material – amphorae and jugs, stairs made of stone, ruined streets, embankments, sunken columns, fragments of statues and remnants of buildings of the former great city. What is interesting, all these artifacts are remarkably visible through the water column of the Mediterranean Sea.

Since 1990, a bathing ban was imposed in the waters of Kekova Island. After some time it was lifted, but the ban is still in force in places close to ancient artifacts.

Surprising as it may sound, the Turkish island of Kekova has not been fully explored. One of the recent discoveries made by the famous French explorer Jacques-Yves Cousteau is a sunken ship that sailed as far back as 1300 BC.

We can only guess how much more unknowns the mysterious Turkish island holds.

Founded on the shores of Kekova Bay, it was famous among sailors for its harbor.

It is known that in those days, the Lycians were quite a developed civilization – even then in Simenes were built two-and three-story buildings, baths were built like the Roman, functioning sewage system and waste water.

The cataclysms and tectonic shocks in the southern coastal mountains (Taurus) in the II century caused the town to be partially flooded. After that, the locals began to leave their homes.

The city was finally deserted after the second big earthquake that occurred in the 7th century.

History tells us that the island belonged to the Byzantine Empire for a long time, and in the 13th century was subjugated to the Ottomans. For a long time after the end of the First World War, the island was a disputed territory between the two countries Turkey and Italy. Kekova was finally ceded to Turkey only in 1932.

Modern Simena (called Kaleköy) is a small town with eighty inhabitants. Among their main occupations are agriculture, tourism and fishing.

Infrastructure in the village is not developed: there is only a small elementary school and small private boarding houses.

Nine years ago, in 2009, a concrete road was built from the village of Uchayaz to the village.

The main attraction of Kaleköy remains the ruins of the Lycian fortress, which is protected by the Turkish Ministry of Culture and Tourism. The fortress is unique in that it is the smallest theater in Lycia, which can seat a hundred and fifty people. Also from the castle opens an amazing view of the surrounding area.

In addition, in the village have survived and Lycian tombs – ancient tombs, which are stone sarcophagi with bas-reliefs, made in the form of a rook. The ancient Lycians chose this form for a reason: the boat was the personification of the main occupation of this ancient people – seafaring and trade. The Lycians had a custom, when someone was buried, to put the body in a fetal position and always put a coin in the mouth of the deceased as a payment for passage to the realm of the dead. Interestingly, a hole was necessarily carved in the lid of the sarcophagus, through which it was believed that the carrier Charon could take the soul of the deceased into heaven.

Kekova Island is washed by the Mediterranean Sea and is near the Turkish town of Kas (180 km southwest of Antalya).

Getting to the island is, of course, more comfortable and easier with a tour. As a bonus you will be taken on a special yacht with a transparent bottom. Such convenience allows you to fully enjoy the ruins of the ancient city. For lovers of scuba diving in addition to sea walk you can also buy scuba diving. Order an organized tour can be in any agency in Antalya, Kemer and other tourist centers of the country.

You can also get to the island of Kekova on your own.

The nearest airport to the island is located in Antalya, and the distance from it is 120 km. First of all, you should go from the airport to the city of Kas. You can do this by public transport, either by car or by cab. You can call a cab using special buttons located at bus stops. The only buses that leave from Antalya Central Bus Station (Otogar) to Kas are the “Bati Antalya” ones, which leave every half an hour.

You will then have to take the ferry from Kas. The ferry runs from May to October. The trip takes one hour. Once you see the rugged and rocky coastline you are at your destination.