In southern Laos, only 3.5 km from the Cambodian border, you can find a small but interesting waterfall. It is not even a waterfall, but rather a cascade of waterfalls and rapids called Khon. Its full name is Khonephapheng Waterfall, but in the world it is better known as Khon Waterfall (sometimes, however, you can meet the name Kon).

Khon Waterfall on a map

Khon Falls is located on the Mekong River in Tyampasak Province. Here the river channel is a giant web of channels, streams and branches.

Their combined width sometimes reaches 10 kilometers. Plus a large number of rapids and drops. All this creates an insurmountable obstacle for navigating the river in these places.

Just above are the coordinates of the largest rapids at Khon Falls. Its height is about 21 meters. It is officially believed that the width of the cascades of Khon Falls about 10 km, and their length of 9.7 km.

There are even opinions that this waterfall is the widest in the world. There are a number of factors in favor of this, and arguments to refute this opinion. If you count the entire width of the riverbed here, then unquestionably the Khon Falls are the widest in the world. But if you break it all down into individual waterfalls, the figures are already modest by tens or hundreds of times. It all depends on the measurement methodology.

You can look at the Livingstone Falls in Africa. There, the length of the cascades exceeds 350 kilometers.

An interesting feature of the Khon waterfall is that it is quite calm and even peaceful waterfall, which with its steady noise sets up for peace and relaxation no worse than the Japanese Shiraito waterfall. Although the volume of Khon, of course, surpasses Shiraito.

There is a small café and observation deck nearby. You can not only immerse yourself in contemplation, but also take spectacular photos in the surrounding area or on the rocks. Just remember about the basic rules of safety. No photo is worth a broken leg. 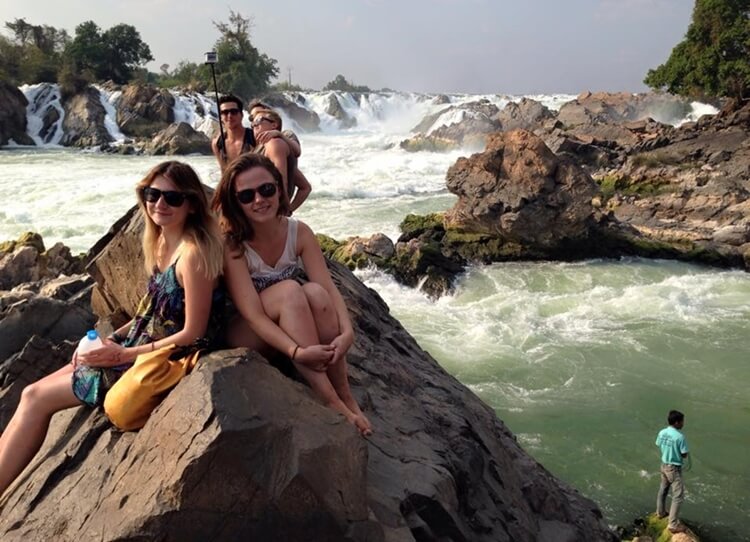 It is believed that the waterfall was first discovered in 1920 by an explorer and traveler named Xohan. Subsequently, this landmark in Laos was named after him. But we have not found any reliable information about it. Moreover, there is evidence that in the late 19th century French colonizers tried to establish navigation in these areas, but they failed. If you have any information on this subject – please let us know.

Interesting facts about the Khon Falls 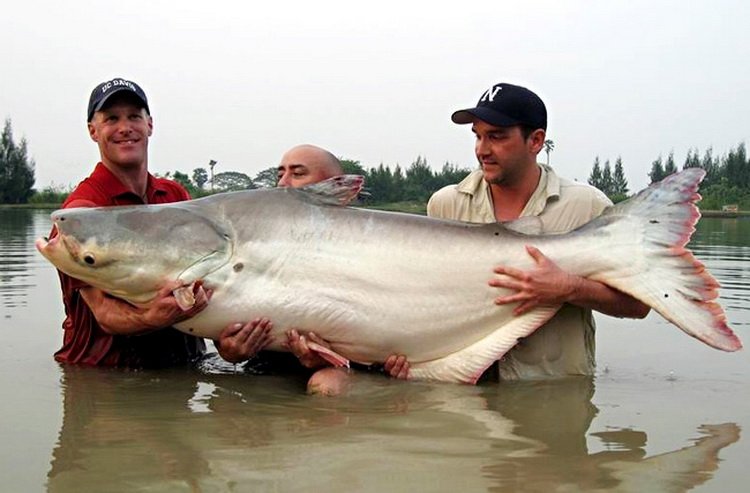 Continuing my descriptions of the sights around Sekong town on the Bolaven Plateau in southern Laos, today I will tell you about the cute Tad Hua Khon Waterfall. It is located upstream from the previous Tad Faek Waterfall, which I told you about in a previous article. Let me remind you that there are also rapids in the vicinity of Sekong, particularly Keng Luang. 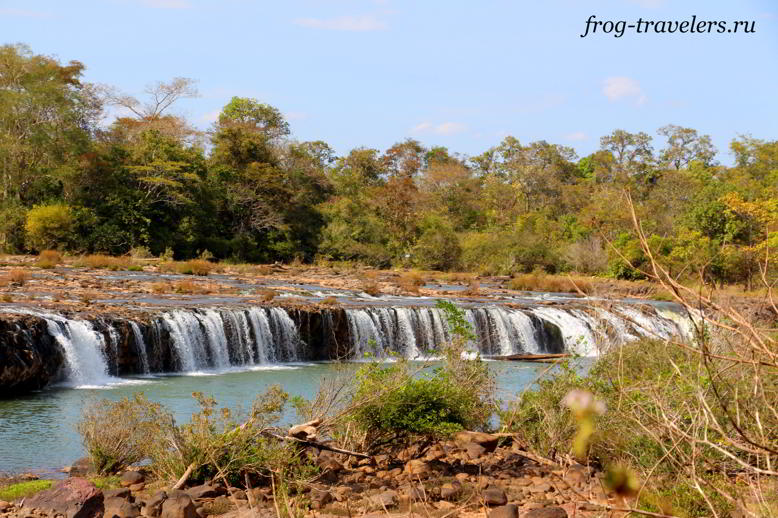 I really liked Tad Hua Khon Waterfall on the Xe Namnoy River in southern Laos. Sometimes the name Tad Se Noi Waterfall is also found in maps. This waterfall may not be high, but it is the widest we’ve seen on our trip to the Bolaven Plateau. 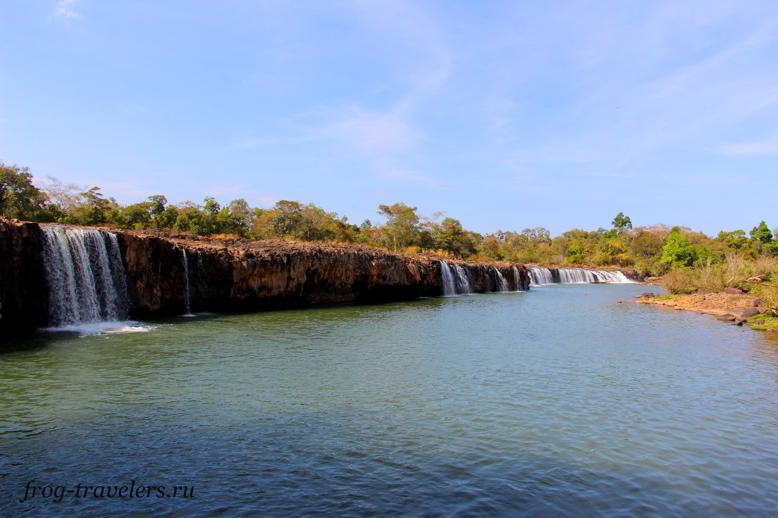 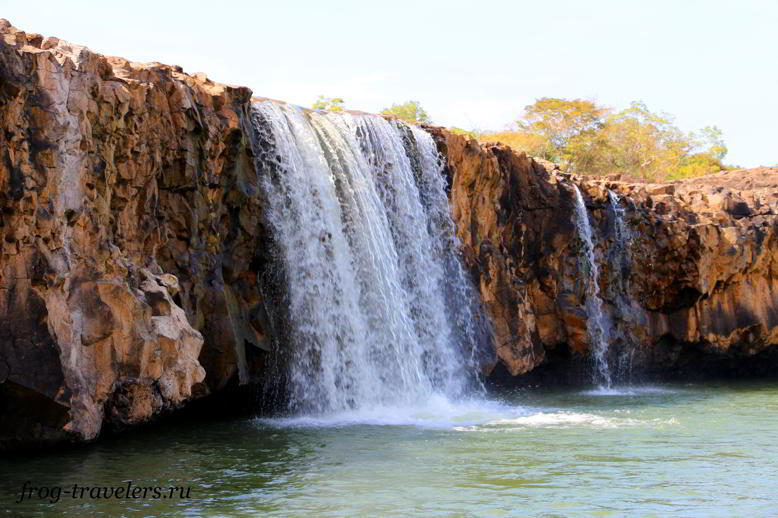 And here it is on the other side.

You can take a romantic walk to the sound of the waterfall, too: 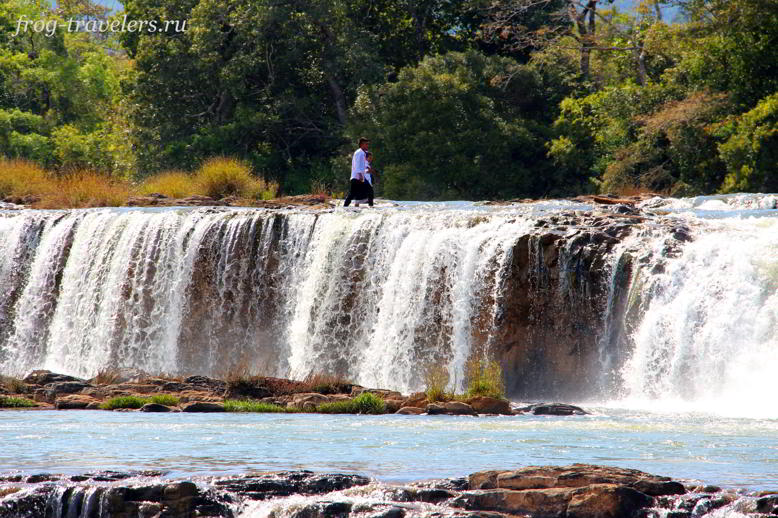 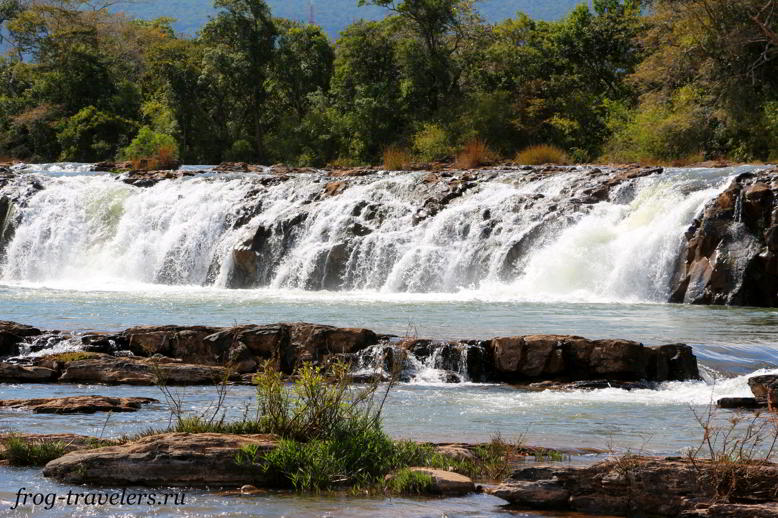 I recommend a visit to Tad Se Noi Waterfall, especially now it’s free, and you don’t have to drive through miles of dusty and bumpy roads to get there.

How to get to Hua Khon Waterfall

Explanation of the labels on the map:

The trip was done on a rented motorcycle, we had started in Pakse the day before. On the road we used the offline map app maps.me. First night we stayed in Sekong – the capital of the province of the same name.

If you drive south from Sekong on the road #11, about 16-17 kilometers there is a bridge over the Xe Namnoy River. The river on the right is just like a river: 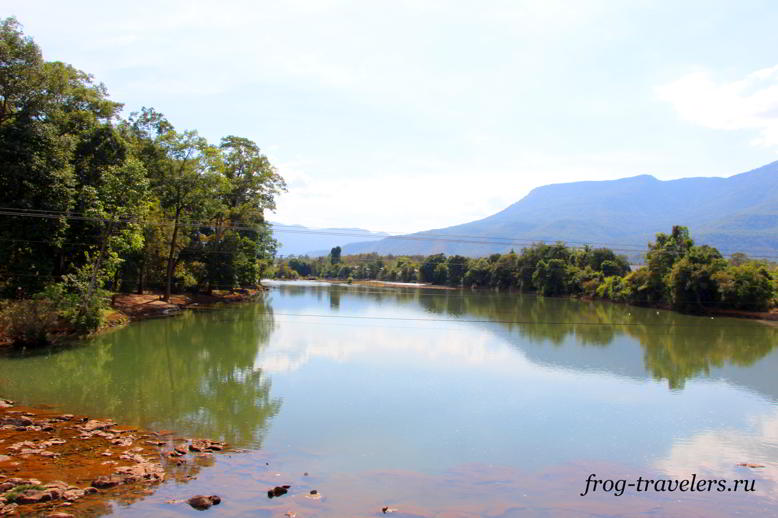 On the left side are rocks: 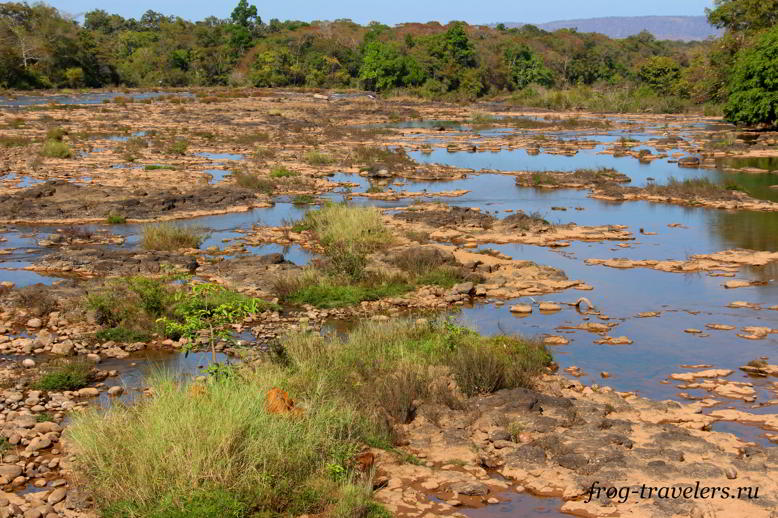 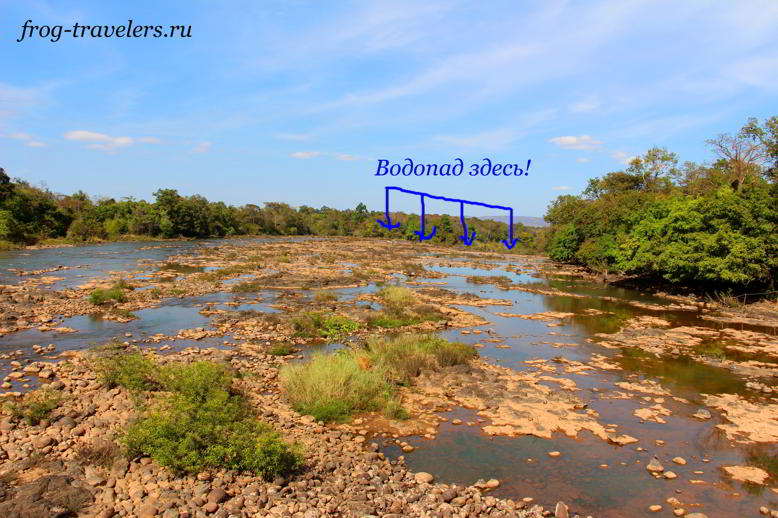 This photo was taken without zooming in. This is so you can see that Tad Se Noi Waterfall (Hua Khon) is very close to the road! A distinctive feature will be the many faded posters just after the bridge. 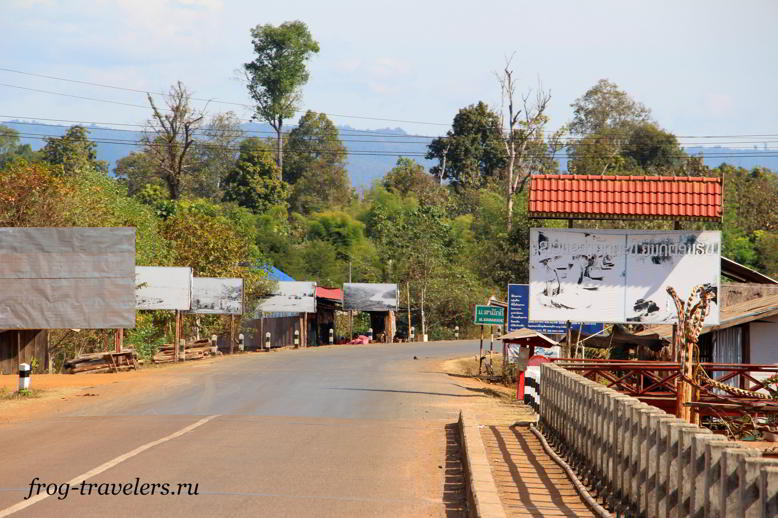 This is where we will turn left.

Soon there will be a place on the left hand side that looks like a rest area. 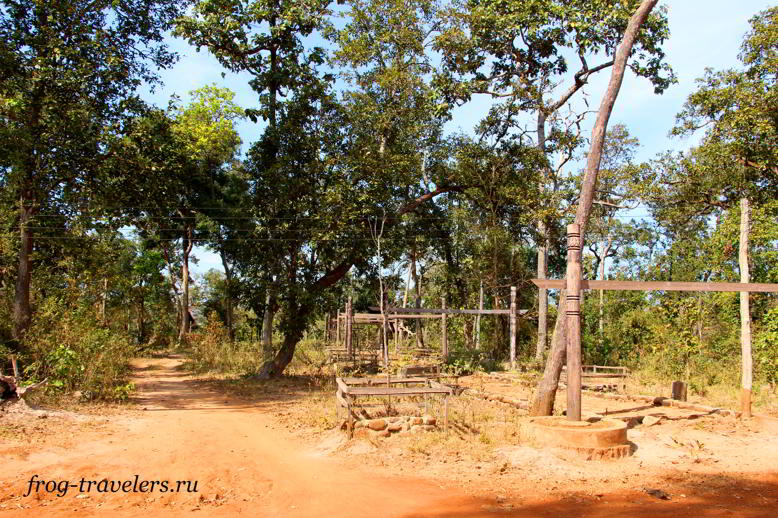 If you follow the path and go down the stairs, there will be a full view of the waterfall.

You can drive on. This is where the road ends. There are half-abandoned guest houses and a few gazebos. 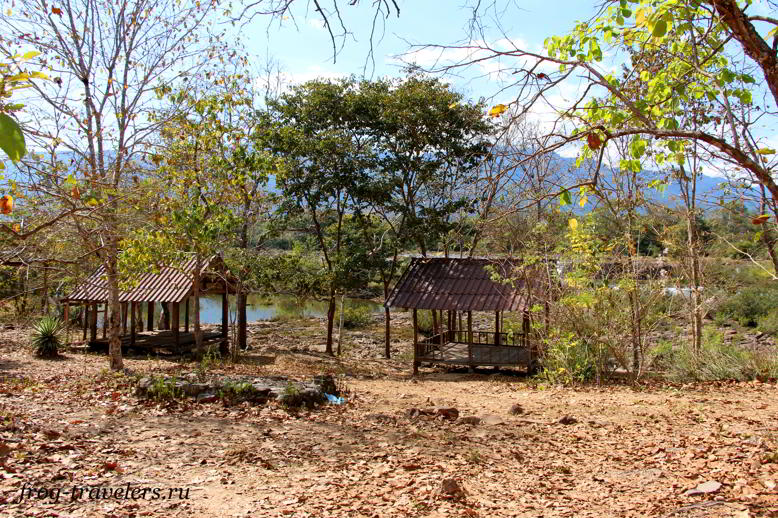 If you go down, and walk over the rocks (in the dry season it is possible without problems), you can observe the other side of the waterfall.