Klosterneuburg with its famous abbey is a great opportunity to explore Austria’s historical past. Here you will find quite a few unique sights.

Klosterneuburg in Austria is considered one of the suburbs of the capital of the country, as it directly borders with the suburbs of Vienna. It is located on the right side of the Danube and rises 200 meters above sea level. From the Austrian capital settlement separates peaks Leopoldsberg and Kahlenberg. Its population reaches 25 thousand people.

The first historical mention of the town dates back to the IX century. It was in the first decade of the century that Margrave Leopold III, a member of the Babenberg family, built the family residence of Neuburg on the summit of Leopoldsberg. In size and luxury, it was well suited to the prestigious status of an imperial ruler. A few years later a famous abbey called Klosterneuburg was erected at the existing castle. It began as a small church, soon expanded into a monastery.

An interesting fact: according to legends, the origin of the city is much more ancient. It is assumed that on this site in I-V century AD there was a military camp of the Romans, the name of which historical documents do not preserved.

In medieval times, the settlement, which arose around the estate of the Margrave, also called Neuburg, was divided into two parts. This was because the inhabitants settled on both banks of the Danube, connected only by a ford. But frequent floods forced them to move their houses further and further away from the treacherous river. Thus Neuburg split into two halves: the Klosterneuburg proper at the religious institution and the Kornauburg around the town market. The settlements were officially divided by a decree of the Austrian Duke Albrecht I at the end of the 13th century.

After the elevation of the founder of the settlement and abbey Leopold III to the rank of saint, the temple complex became one of the most famous landmarks of Klosterneuburg. From the fifteenth century to the present day, numerous pilgrims from all over Austria have come here to pay their respects to the shrine. In the Middle Ages the monastery had one of the best book collections in Germany and Austria, and the holy fathers were famous for their ability to make very accurate geographical maps.

In 1938 the city was incorporated into the Austrian capital and was considered its district for the next 16 years.

The city is famous primarily for its monastery Klosterneuburg, whose first stone near the waters of the Danube was laid in 1114.

Our guides will tell you the old legend about the foundation of the monastery. As the legend goes, one day the margrave, later canonized, and his wife Agnes climbed to the top of their new residence Neuburg. A strong gust of wind suddenly tore the cloak from Agnes and carried her away.

She was not found until decades later, when Leopold III went out hunting. He noticed a bright glow emanating from a thicket of bushes. It was there that he discovered his wife’s object and was immediately visited by a vision of the Mother of God. She commanded that a new monastery be immediately built on this spot and that the margrave’s son Otto, born at the same time, subsequently became the abbot.

In the 17th century, after the occupation by the Turks and the time of the Reformation, the cathedral and the surrounding buildings were rebuilt in the Baroque style. In the 18th century, Emperor Charles VI of Habsburg had the idea of making Klosterneuburg the Austrian Escorial, one of the most famous religious complexes in Europe at the time. The monastery was rebuilt in Gothic style, expanded, and its library was enriched with thousands of folios.

Today in the central building of the temple complex it is worth a look:

READ
Kathmandu the capital of the state of Nepal: detailed information

The excursion around the city, except for the visit to the temple complex, includes a visit to:

You can reach the city from Vienna from the Heiligenstadt subway station, from where buses 238 and 239 run. From Franz Josef Station to Klosterneuburg, the S40 city commuter train leaves every half hour. 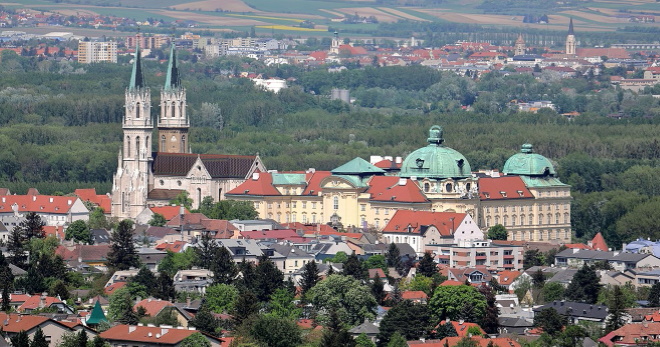 Klosterneuburg is a city in Austria, a suburb of Vienna. It is known for its rich history. In the local monastery is buried Leopold the Saint, the “patron saint” of Austria.

Klosterneuburg stands on the Danube to the northwest of Vienna. It is very close to the capital, and between 1938 and 1954 was even part of it. The city covers a little more than 76 square kilometers and is located at an altitude of 192 meters. It has a population of about 27.5 thousand people. The locals themselves often abbreviate the name of their city and pronounce it as Kloburg.

Back in the first centuries AD this place was the location of the ancient Roman military camp. Unfortunately, its name is unknown. The history of the settlement of Klosterneuburg also goes back many centuries. In 1108 Margrave Leopold Babenberg laid a castle on the mountain and named it so – the New Castle (Neuburg). In 1114 nearby was founded a monastery, and the land around it went to the abbey. Originally Neuburg city consisted of two parts, located on the two banks of the Danube: the part near the monastery was called Klosterneuburg, the part near the market – Kornoiburg. However, there were frequent floods on the Danube, and the inhabitants began to “move” their houses away from the river. The result was two cities. Officially they were divided in 1298 by Albrecht I., who gave Klosterneuburg city rights at the same time.

READ
Harbin in China and its attractions

After Leopold, the founder of the city and the monastery, was canonized in 1485, the city monastery became one of the most important pilgrimage centers in the country. The monastery was also famous for having one of the largest libraries and map shops in the German-speaking lands.

Today Klosterneuburg is an important center of winegrowing and winemaking. Several industrial enterprises work here, the Austrian Institute of Science and Technology and the Konrad Lorenz Institute of Evolution and Cognitive Research are situated. Konrad Lorenz.

Klosterneuburg is located close to Vienna, and its climate is practically the same as in Vienna. Winter is warm, the temperature is negative only at night, and it drops below zero by only 1-2 degrees. The daytime temperature is +3 … +5 °С. The snowfalls are rather frequent.

Usually in the second half of February the spring already comes, but weather remains unstable, it can get absolutely warm and then – return frosts. Summer can be called hot, if the average daily temperature in June is +24 °С, in July and August it reaches +26 … +28 °С. Summer is the wettest time of the year: it is from May to August when there is the greatest amount of precipitation (about 70 mm per month). The annual precipitation is 650 mm.

A visit to the sights of Klosterneuburg is part of the program of many excursion tours. The first to be visited is certainly the famous Klosterneuburg Monastery, founded in the early XII century by St. Leopold, who is considered the patron of the country. Both the monastery itself and its wine cellars, where the oldest wine cellar of the country is located, are of interest. The cellars are 36 meters deep. More than fifty varieties of wines are produced here and they can be tasted and bought.

The abbey is not the only attraction of the city. Also worth seeing is the Essel Collection art gallery. This collection of works by contemporary Austrian and foreign masters of the brush is housed in a modern building. The collection is the largest private collection in the country.

Klosterneuburg is a small town, but even here you can choose a suitable accommodation. It is possible to rent an apartment or stay in one of the small comfortable hotels:

There are about fifty eating establishments in Klosterneuburg. There are places where you can eat very cheaply, and soulful restaurants, where you want to sit longer with a group of friends. The best visitors have recognized:

There is no shopping as such in Klosterneuburg – of course, there are stores designed to meet the needs of locals, but still they also go to Vienna for big purchases. What to take as a memento of your visit to the city? Local wine sold in the store at the monastery: the abbey has been a noble winemaker for many years, and today Stift Klosterneuburg is the largest private winery in Austria, and the monastery itself has a viticulture research center. 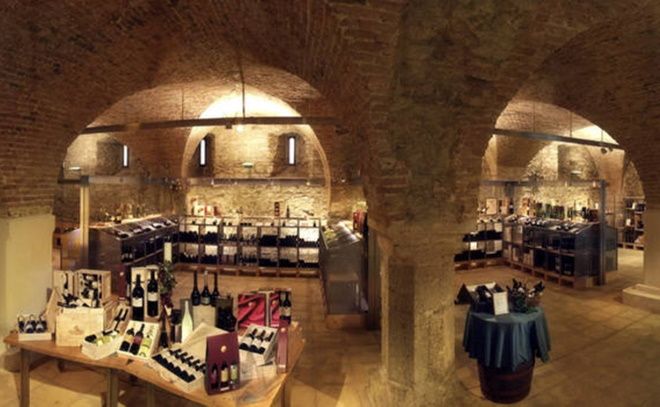 How to get to the city?

Klosterneuburg is located less than 15 km from the center of Vienna. You can get here by car or take the B14, or B227 and B14, or the A22 and B14 – either way takes 20-30 minutes. You can also get here by public transport: You can take the suburban S-bahn (route S40) from Franz-Joseph station to Klosterneuburg in 15 minutes and every half an hour. There are also buses that leave from Heiligenstadt bus station.