Wooden architecture in the Karelian village of Kokkoyla

The village of Kokkoyla is on the shore of the Vedlozers. The fame of the village comes from the barn, built by the local peasant Kiprushkin in 1892.

The village Kokkoyla is located on the shore of Lake Vedlozera. Territorially it belongs to the Kroshnozero rural settlement, which is a part of the Pryazhinsky district. Officially there are 2 people living in the village. You can get from Pryazha to Kokoila only by an unpaved road. After heavy rains some parts of it become impassable.

The village got its name from the Karelian kukko – rooster. Lost in the Karelian forests the settlement is divided into two parts. Closer to Manga, east of the village, is Malaya Kokkoyla. It is separated from the Big one by a part of the forest. There is only one street in the village. Giant spruces grow along it.

The old and new huts are scattered on a sloping field bordering the forest. Residents show up as the snow melts. Up to a hundred dacha residents gather in the village in the summer. With the onset of cold weather, the village is empty. All village buildings are made in the style of traditional northern architecture.

The main attraction of Kokkoila is a chapel consecrated in honor of St. Barbara. It stands between the huts, but you can see it from any side of the settlement. The exact date of its construction is uncertain. They put it in the XIX century. The appearance of the wooden building with a cage type belfry resembles a barn. The roof was restored in 2005.

The top of the hipped bell tower is decorated with a cupola. Its shape reminds a fir cone. The look of the cupola does not resemble the cupolas of orthodox churches. A carved porch with an entrance to the chapel is situated on the western side of the building. The main value of the chapel is the icon of St. Barbara. The relic dates from the early 18th century. It combines traditions of icon painting of that period with techniques of masters of the Petrine period.

On the icon St. Barbara is depicted as a beautiful woman with lush hair. Her face has regular features. Her head is adorned with a crown, her body is wrapped in a red cloak. The image of the saint is full of majestic nobility. There used to be another landmark in the settlement. In it stood a barn, erected in 1892. He was moved to the museum-reserve “Kizhi”.

The two-story building was built by the local peasant Kiprushkin. The log cabin is almost square in shape. On top it is covered with a gable hewn roof. Not a single nail was used in its construction. The front wall of the building has a steep staircase that leads to a second floor balcony-garret on the outside.

The Kiprushinsky barn is one of the masterpieces of Karelian architecture. The building has regular forms. The overhangs of the barn remind the open wings of a bird. The gallery is supported by 2 carved columns. The walls of the structure are hewn “in a balk”.

The first time the barn was examined by an architect B.V.Gnedovsky. It happened in 1950. It was moved to Kizhi in 1961.

Vedlozero, on the shore of which the settlement is located, is located on the territory of the Pryazhinsky national district. The length of the shoreline of the reservoir is 28 km. You can catch fish in it:

A total of 12 species of fish are found in the pond. Go fishing islands. There are 15 of them on the lake.

How to get to Kokkoyla

The distance from Petrozavodsk to the settlement by road is 72 km. Almost 52 kilometers of the route to Pryazha runs along the highway A121 “Sortavala”. Then an unpaved road begins.

The Chapel of St. Barbara

The Chapel of St. Barbara (XIX century) and St. Barbara’s spring are located in the Republic of Karelia, in the village of Kokkoyla. The village itself is very small, situated 8 km from Manga village or 18 km from Pryazha settlement on the way to Krosnozero and Sortavala (4 km from the main road). 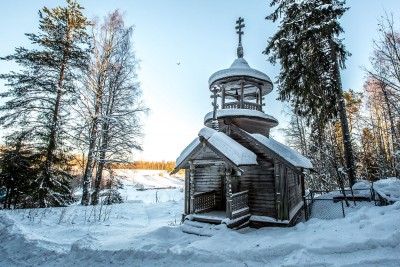 Varvara Chapel is located at the edge of the village closer to the forest on a hill surrounded by ancient giant fir trees. Above the gable roof towers a bell tower topped by a small cupola, resembling a fir cone, with a wooden six-pointed cross. 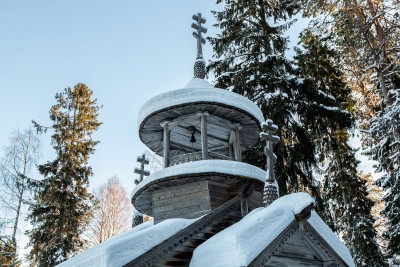 The interior decoration of the chapel is quite modest. But an icon of Barbara that dates back to the XVIII century has been preserved here. Stylistically the icon is somewhat atypical, Barbara is portrayed on it as a beautiful lady of the world with flowing blond hair. She is dressed in a bright crimson cloak.

You can enter the chapel in the summertime – it is enough to enter the house of the guardian and take the key. The chapel is usually closed in winter.

The holy spring of Varvarinsky. 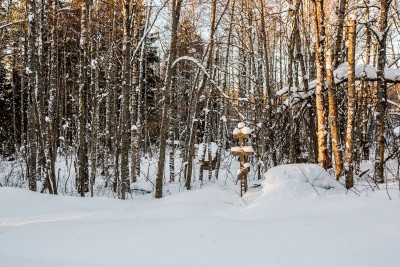 Not far from the village of Kokkoyla you can walk along the forest path and find an ancient holy spring, which was also consecrated in honor of St. Barbara. It is said that the water from this spring helps women with various ailments. To find the spring is simple – from the chapel of Varvara – you must go about 300 meters to the west along the forest road from the outermost house.

Chapel of St. Barbara in the village of Kokkoyla and St. Barbara’s spring on the map:

The Holy Great Martyr Barbara was born in the city of Iliopolis (present-day Syria) under the emperor Maximian (305-311) in a noble pagan family. Her father Dioscorus, who had lost his wife early in life, was passionately attached to his only daughter. In order to protect the beautiful girl from view and at the same time to deprive her of communion with Christians, he built a special castle for his daughter from which she could only leave with her father’s permission (Kontakion 2). Contemplating from the tower the beauty of God’s world. Barbara often felt a desire to know its true Creator. When the educators assigned to her said that the world was created by the gods her father revered, she mentally said: “The gods that my father honors are made by human hands. How could these gods have created such a luminous sky and such earthly beauty? There must be one such God, who was not made by human hand, but by Himself, who has His own being. Thus did Saint Barbara learn from the works of the visible world to know the Creator, and upon her were fulfilled the words of the prophet “I teach you in all your works, I teach you in the creation with your hand” (Psalm 142:5) (ix 2).

As time passed, rich and noble suitors began to come more and more often to Dioscorus, asking for the hand of his daughter. Her father, who had long dreamed of marrying Barbara, decided to talk to her about marriage, but to his dismay he heard her flatly refuse to do his will. Dioscorus decided that in time his daughter’s mood would change and she would be inclined to marry. To this end he allowed her to leave the tower, hoping that she would see a different attitude toward marriage in her interactions with her friends.

One day, when Dioscorus was on a long journey, Barbara met local Christian women who told her about the Triune God, about the unspeakable Deity of Jesus Christ, about His incarnation from the Blessed Virgin, and about His free suffering and resurrection. By the way, at that time there was a priest in the city of Iliopolis, who had the appearance of a merchant. When Varvara heard about him, she invited the presbyter to her house and asked him to administer the sacrament of baptism to her. The priest expounded to her the foundations of the holy faith, and then baptized her in the name of the Father, and of the Son and of the Holy Spirit. Enlightened by the grace of Baptism, Barbara turned to God with even greater love. She promised to devote her life to Him.

During the absence of Dioscorus, a stone tower was under construction in his house, and the workmen on his master’s orders intended to build two windows on the south side. But one day Varvara came in to see the construction and she begged them to make a third window – in the image of the Trinity Light (Ikos 3). When her father returned, he demanded from his daughter an account of what had been done, “Three is better than two,” said Barbara, “for the unapproachable, unspeakable Light, the Trinity, has three windows (Hypostases or Persons). When Dioscorus heard Barbara’s Christian doctrinal instruction, he became enraged. He rushed at her with a naked sword, but Barbara managed to run out of the house (Ikos 4). She took refuge in a mountain crevice that miraculously parted before her.

By evening Dioscorus, at the direction of a shepherd, did find Barbara and dragged the martyr with beatings into the house (Ikos 5). In the morning he took Barbara to the town governor and said: “I renounce her because she rejects my gods, and if she does not turn to them again, she will not be my daughter. Torture her, sovereign ruler, as it pleases your will.” Long persuaded the governor Barbara not to depart from the ancient laws of her father, and not to oppose the will of her father. But the saint, in her wise speech, reproved the errors of the idolaters and confessed Jesus Christ as God. Then they began to beat her violently with ox veins, and after that they rubbed her deep wounds with a rough hair shirt.

READ
Kathmandu the capital of the state of Nepal: detailed information

At the end of the day Barbara was taken to prison. At night, while her mind was busy praying, the Lord appeared to her and said: “Be bold, my bride, and do not be afraid, for I am with you. I am watching over your feat and relieving your sickness. Endure to the end, that you may soon enjoy eternal blessings in my kingdom.” The next day, everyone was surprised to see Barbara – no trace of her recent torture remained on her body (picos 6). Seeing such a miracle, one Christian, named Juliania, openly confessed her faith and declared her desire to suffer for Christ (Kontakion 8). Both martyrs were led naked through the city, and then hung on a tree and tortured for a long time (Kontakion 9). Their bodies were tormented with hooks, burned with candles, and beaten on the head with a hammer (Ikos 7). It was impossible for a person to stay alive from such torture, if the martyrs had not been strengthened by the power of God. Remaining faithful to Christ, the martyrs were beheaded by order of the governor. Saint Barbara was executed by Dioscorus himself (Ikos 10). But the ruthless father was soon struck by lightning, turning his body to ashes.

The relics of the holy Great Martyr Barbara were transferred to Constantinople in the VI Century, and in the XII Century the daughter of the Byzantine emperor Alexei Komnin (1081-1118), Princess Barbara, entering into marriage with the Russian prince Michael Iziaslavich, brought them with her to Kiev, where they are now – at the cathedral of Saint Prince Vladimir.