Lake Kolsay – the Pearl of Kazakhstan.

Creation of the park

State National Natural Park “Kolsai Kolderi” was founded in 2007, is located on the northern slope of the Tien Shan mountains, between two mountain ranges of the Zailiisky Alatau and Kungey Alatau, near the eastern border of Kyrgyzstan. “Pearls of the Tien Shan”, as the locals call the Kolsai Lakes. The purpose of the park is to preserve the state natural reserve fund of biological diversity, unique natural objects of special ecological and scientific value. Many rare and endangered species live here, in particular the Tien Shan brown bear, snow leopard and Turkestan lynx. The biosphere reserve occupies an area of 242,085 hectares. The main natural attraction of the park is the Kolsai Lakes, located 320 km from Almaty. The picturesque Lake Kaiyndy, is also on the territory of the Park.

The sights of the park

The system of three lakes in the northern Tien Shan, the lakes were formed in the Paleogene era, more than thirty million years ago, as a result of a giant break in the crust. Kolsay” means “lake in the gorge” in Kazakh, and all three lakes are located in the most picturesque gorge of the eastern part of the Kungei Alatau mountain range at an altitude of 1800, 2250 and 2700 above sea level. The Kolsay River takes its source from the glaciers located on the Kungei Alatau mountain ranges and flows in turn into three lakes: Upper, Mynzhylky and Lower Lakes. The depth of the Lakes is 40-50 meters. The beauties of local nature leave no one indifferent: during one day you can visit all landscape and climatic zones, from sandy deserts and steppes in the foothills to eternal glaciers and the highest mountain peaks.

Kolsai Lakes activity is a favorite destination for mountain hikers. Trekking to the lakes is easy and suitable even for non-professionals. In addition, Kolsay is a great place for picnics in nature and horseback riding and mountain biking.

READ
Lodi Gardens is a city park with tombs. India

Where to stay overnight? For connoisseurs of mountain camping there are special sites near the lower and middle lake for setting up a tent, where guests and tourists can experience all the romance of mountain tourism – with a tent and a campfire under the night starry sky. The season for camping is the period from April to the end of September. For those who like comfort and individuality – you have possibility to reserve room in comfortable and cozy guest-house, in mountain mini hotel or glamping directly above the lake, and you will enjoy mountain air, saturated with needles, motley grass, gorgeous nature, snowy peaks of Tien-Shan mountains without leaving your comfort zone.

Kolsai Lakes have been included in the UNESCO World Network . September 15, 2021 UNESCO included the State National Natural Park “Kolsai Kolderi” in the World Network of Biosphere Reserves, reports IA “NewTimes.kz”, referring to the press service of the Ministry of Ecology, Geology and Natural Resources of Kazakhstan. 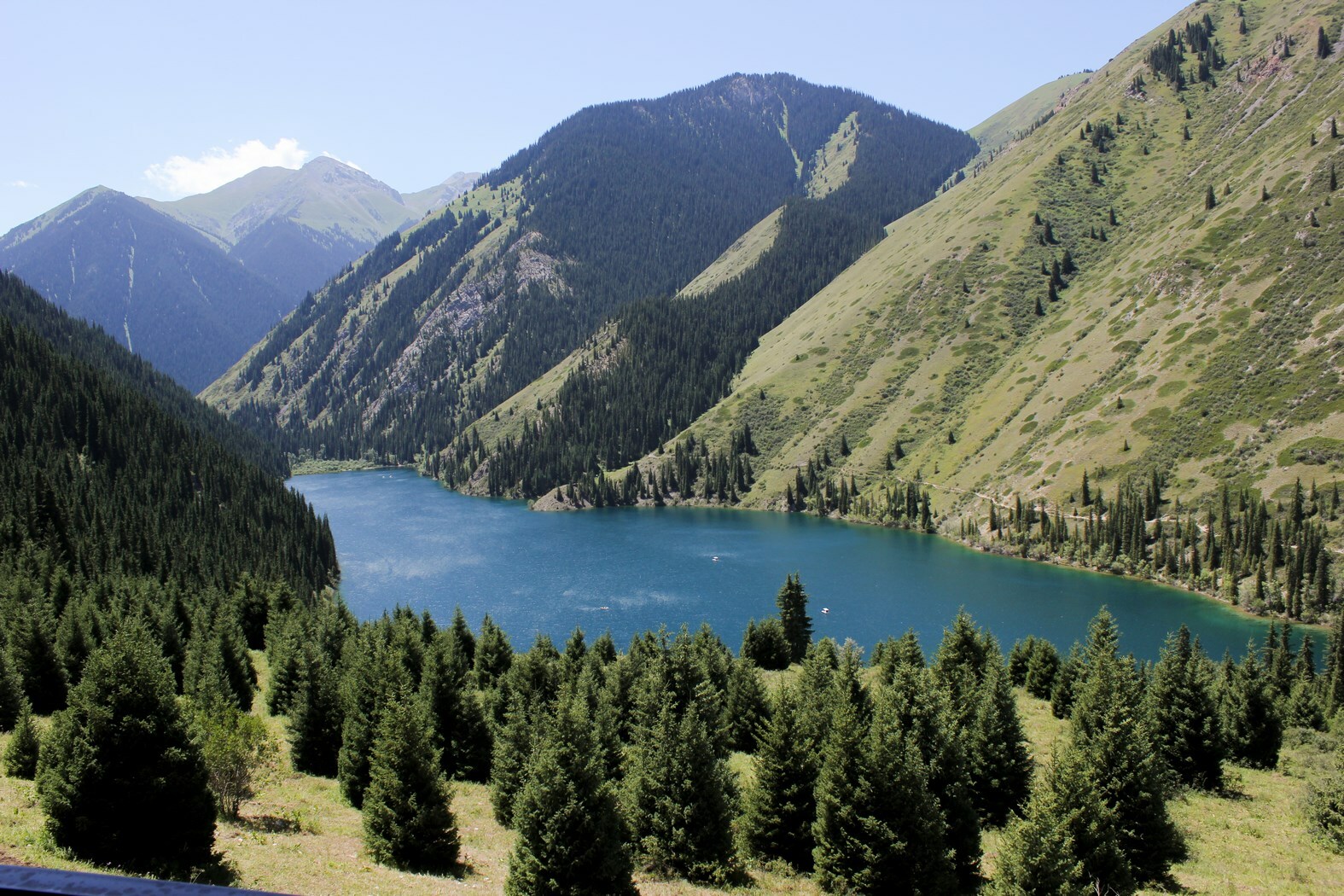 The locals often tell tourists a legend about these lakes: two families used to live in the gorge. One was rich, the other a bit more modest, but the families were friends. The rich family had three daughters and the poor family had a son. The children always played together and never fought. Then they grew up, the girls turned into beauties, and the boy became a brave young man. The time came for the girls to get married, and all three, secretly from each other, told their father that they wanted to marry this young man only, and no one else! And then the father realized that there was no easy way out. If he let one of his daughters marry this young man, the other two would be sad, and there would be no more peace and happiness in the family. He thought long and hard about what to do, and finally he asked God for help. God also thought about this, and decided to turn the three girls into beautiful lakes, and the young man into a large, clear stream that would connect all three lakes. In this way, the Almighty connected all the loving hearts forever. Now it is as if the three Kolsai lakes were strung together on a transparent thread, striking in their beauty. “Kolsay” is translated from Kazakh as “gorge of lakes”: “kol” means “lake”, “say” means “gorge”.

Lake Kaindy (Kaindy), located in the Tien Shan mountain system at an altitude of around 1,867 meters above sea level, is a natural landmark of Kazakhstan. It is a popular vacation spot. Its tranquility and beauty attracts tourists from all over the world. In Kazakh, “Kaindy” means “abounding birch trees”. The lake was named Kaindy after this grove. The lake was formed in 1910, as a result of an earthquake. The resulting landslide blocked the river and the valley filled with water. There used to be a dense coniferous forest on the site of the lake, which was almost completely flooded by water. The trees died, of course, but the icy water of the lake prevented rotting and the spruces seem to have been preserved. Even on hot summer days, the lake does not get warmer than +6 degrees. Now the lake Kaindy hides in itself an amazing underwater pine forest. The lake is about 400 meters long and the greatest depth is about 20 meters. Its water is crystal clear, so you can clearly see the bottom. The lake looks like a real fairy tale: the cleanest air, the smell of pine, beautiful nature. True, in the summertime a lot of tourists come to the lake.

Do not think that Kazakhstan is steppes, deserts and Baikonur Cosmodrome. There are landscapes in this big country, which are very difficult to believe in.

For starters, read about the Verdon Gorge in France. Or Königssee, the purest lake in Germany, where even Hitler built his summer house. So you have an understanding of the classic charm of mountain lakes.

Such places, for some reason, are persistently associated with European sights. But our southern neighbor Kazakhstan can offer such places, which can easily be on a par with the European, and somewhere even give them a head start.

One of them is in the southern part of the country, just a few kilometers from the border with Kyrgyzstan. The Tien Shan Mountains carefully protect three lakes, which stretch from the south to the north, and are situated at some distance from each other. These are the amazing Kolsai Lakes in the territory of the Kolsai Keldery National Park.

Kolsai Lakes on a map