Königsee is a lake in Germany, located in the center of an alpine national park, a clear mountain lake and Hitler’s favorite place.

Königssee is a lake, one of Germany’s most beautiful and popular attractions. Königssee means “Royal Lake.” Located in the southeast of Bavaria, in the Berchtesgaden Nature Reserve.

Transparent water, like a royal guard, is surrounded by high mountains. Many tourists, travelers, every year go to the lake to enjoy the views of alpine landscapes.

Royal Lake was formed by melting glaciers in the late Ice Age.

The water body is augmented by Lake Obersee, which flows into it.

By car From the northern, eastern and western parts of the country the lake can be reached by car on the highway A8 Munich-Zalzburg. Tourists from southern Germany need the Tauernmotorway leading to Berchtesgaden. Then you should change to the B20 highway, which leads to the national park.

By train You can take the train to Berchtesgaden railway station. Then you should change to bus number 841 and number 843.

By bus The distance by bus number 840 from Salzburg to Berchtesgaden is covered in 1 hour 15 minutes. Then you have to change to the bus number 841 and 843.

The lake has a unique acoustics. Due to the location of the reservoir surrounded by rocks, multiple echoes are formed.

Many painters come to Königsee to paint their paintings. Because of this, the reservoir is called the “lake of artists.

A unique landmark on the Royal Lake is a hunting castle from the 18th century. Its main feature is an ice chapel, which does not melt even in the heat of summer.

The reservoir is home to rare species of flora and fauna, such as blue edelweiss. Fishing is allowed here.

In order to preserve the landmark, the Royal Lake was taken under government protection in 1909. Since then, only paddleboats and electric motorboats can ply on its waters. On the eastern side of the lake is one of the highest mountains in Germany, the Watzmann. Its altitude reaches 2,713 m.

The local legend says that the cruel king of Bavaria – Watzmann, was punished by God and turned into a mighty mountain together with his entire family.

Another peculiarity of the reservoir is its unique acoustics. Due to its location surrounded by rocks, the lake produces multiple echoes. The captain of the pleasure boat is sure to entertain guests by playing a simple tune on the trumpet in duet with a clear, musical echo.

The shore of the body of water is precipitous and overgrown with trees. For this reason, getting around the lake on foot or by vehicle is almost impossible.

The main attraction of the lake is the church of St. Bartholomew. Its construction dates back to the XII century. The characteristic red domes were placed on the church in the XV century. Since St. Bartholomew is considered the patron saint of Königsee lake, the second name of the reservoir was given in honor of this saint.

Tourists love to visit another local landmark – the hunting royal castle of the 18th century. Unique is the ice chapel, in which the vault does not melt even in the warm summer.

On the territory there is a cozy hotel and fish restaurants. In the adjacent park you can admire the strolling deer.

At the northern end of the lake is a lonely island. On its territory in 1711 was installed a famous statue of another saint – Jan Nepomutsky. He also protects this corner of nature from various dangers. The statue is made of marble. Its height is 180 cm, and the height of the pedestal is 2 meters.

From the northern bay you can see extraordinary beautiful pictures of nature. The bay got its name “Artist’s Corner” because of the many painters who painted there.

Another local landmark is the house of Hitler, called “Eagle’s Nest. Like a bird’s nest, the house is built on top of a cliff that is 1,834 meters high. The construction was built by Martin Bormann for the anniversary of his Fuhrer.

Germans are very careful to preserve the nature of the Royal Lake. Its territory is home to rare species of fauna and flora, such as blue edelweiss. The lake itself is home to a large number of trout and char. Professional fishermen especially appreciate the richness of the lake.

In summer, vacationers swim and fish. In winter, there are excellent opportunities for practicing the following kinds of winter sports: skating, sledding, luge, snowboarding and curling. Holidays at Lake Könisgee has a therapeutic effect on the human body. Improve health and strengthen the health of clean mountain air, mild climate, mineral springs.

Lakes in the mountains – an amazing combination of water smoothness and high mountains. Such places always attract people. Just one lake Ritsa in Abkhazia is worth. Or Canadian Lake Moraine in the Valley of the Ten Peaks. To have such a landmark at one’s disposal is a pride for any country. Germany has such a unique body of water. 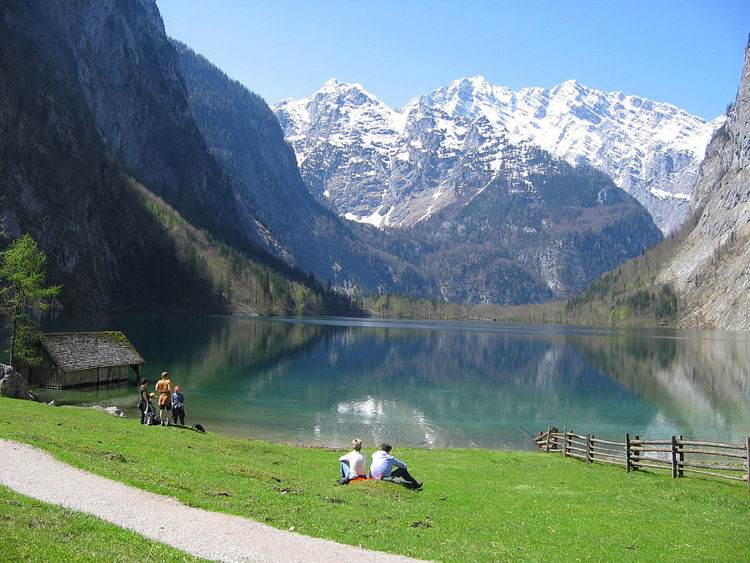 Stretching from north to south, the beautiful mountain lake Königssee is located in the southeastern part of Bavaria, just five kilometers from the Swiss border. If you look at the map, you can see that the lake is at the center of a kind of appendix that forms the border with the neighboring country.

Lake Königsee on the map

Lake Königssee is one of the most famous attractions of the Alpine mountains of Germany and is part of the National Park Berchtesgaden. Thousands of tourists from all over the world visit these places every year. 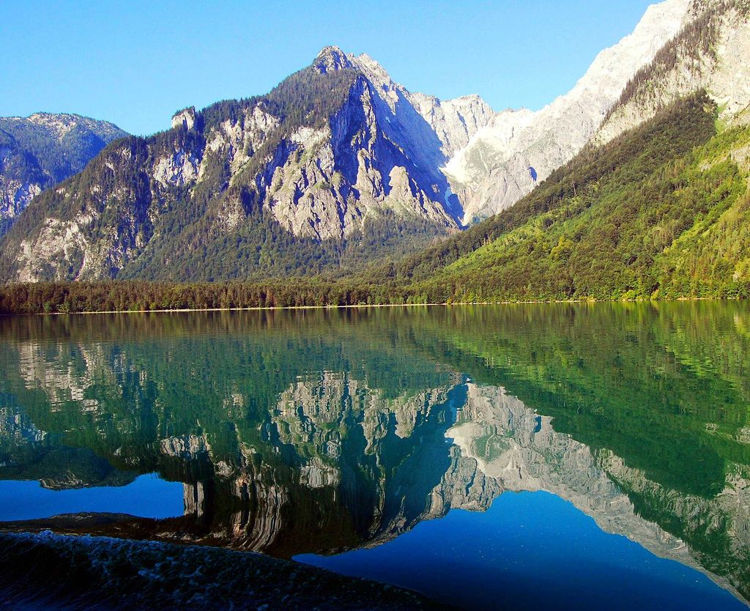 The name of the lake in the original spelling of K? nigssee and means “Royal Lake. In Russian it sounds Königsee. But because of the complexity of the German language, in different sources can be found another translation of the name, as Königsee. But we will use Königsee, as this name is located on Google maps and is likely more correct. The lake was formed during the late ice age as a result of melting ice and is quite a decent size.

The lake is famous not only for its beauty and amazingly clear water, for which it is called “the cleanest and clearest lake in Germany”. This was also a favorite place of Hitler. Yes, the very same who “zamnusoval” tens of millions of innocent people in the 40’s of last century. His residence, known as the Eagle’s Nest, is preserved in the vicinity of the lake. It was built on top of Mount Kielstein, 1834 meters high. The house was erected at the behest of Martin Bormann for the Führer’s birthday.

In order to preserve the natural charm and pristine nature of the lake, the national government took it under protection since 1909. Since then, only boats and boats with electric motors or on oars have been allowed to sail on the lake. 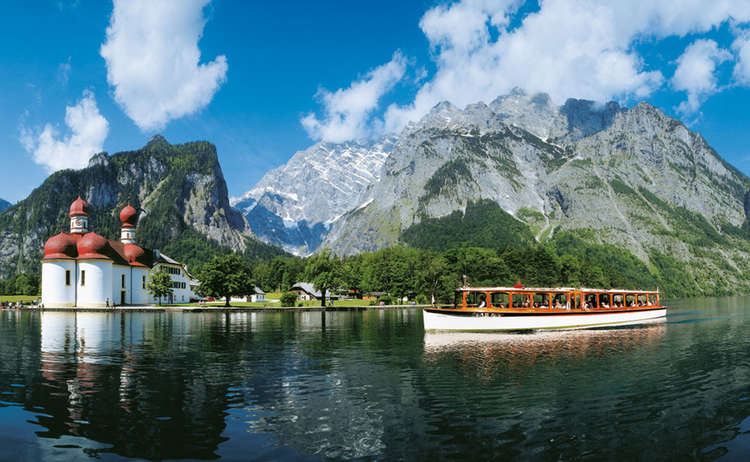 On the eastern side of the lake is a mountain Watzmann – one of the highest mountains in Germany (height 2713 meters). There is even a legend about it, which says that in ancient times Bavaria was ruled by a bloodthirsty and cruel king named Watzmann. He was so fierce and ruthless that God punished and turned him and his whole family into a high mountain. 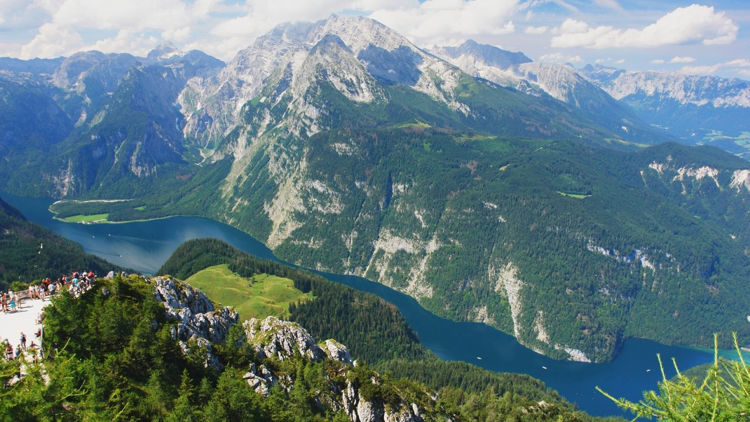 Lake Königsee is available to tourists all year round. In summer it is swimming and fishing. In winter, there is a wide range of snow and ice activities: sledding and skiing, skating, snowboarding and even curling. Beautiful mountain air, mineral water springs and mild climate have a therapeutic effect on the human body. So to combine business with pleasure is the best way to be here.