In the federal state of Saxony, whose capital is Dresden, there is a beautiful national park Saxon Switzerland, about which I will tell in this post and, of course, show pictures from there.

Saxon Switzerland is a national park with beautiful views, the main part of which lies in the Elbe River valley on the border of the Czech Republic and Germany, southeast of Dresden. Saxon Switzerland is a mountainous area with about 1,000 elevations. This region of Germany is very popular with residents for hiking, biking, and climbing. 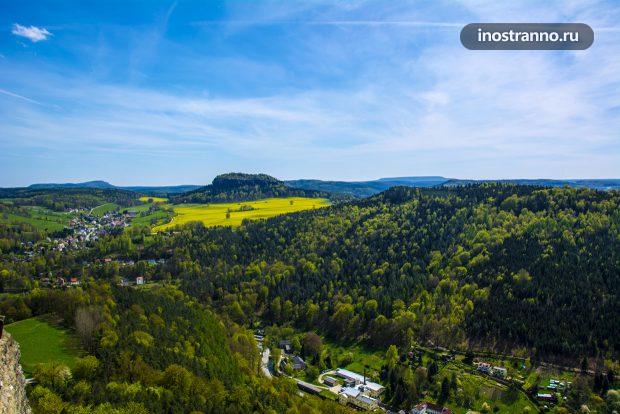 This mountainous area is called the Elbe Sandstone Mountains. It is a sandstone mountain range on the upper Elbe River in Germany and the Czech Republic. The maximum height of the mountains is only 723 meters. It is an array of rocks that have taken fanciful shapes and mountains covered with forests. 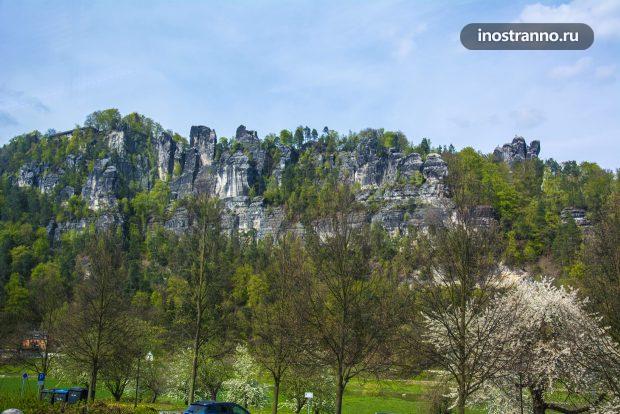 I set off for my walk in Saxon Switzerland from the Königstein (Sächs Schw) railway station, which I reached by train from Dresden. The first point of the route is the main attraction of these places – Königstein Fortress . 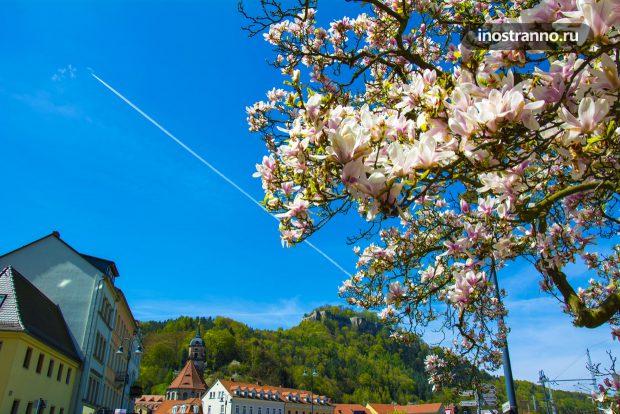 Thanks to the signs and paths, I reached the fortress in 40 minutes. 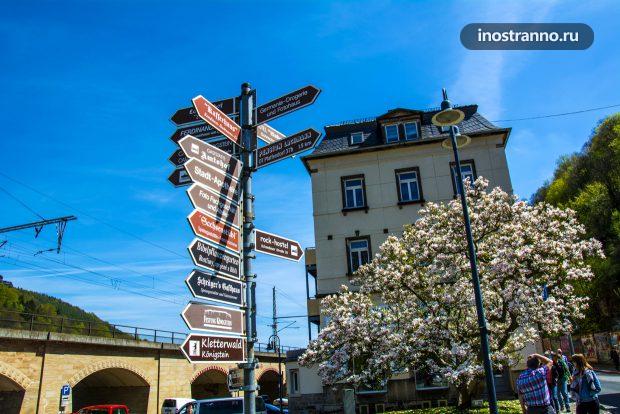 Also from the train station or from the parking lot on the first level you can reach the fortress on the tourist train, the fare is about 5 euros per person. 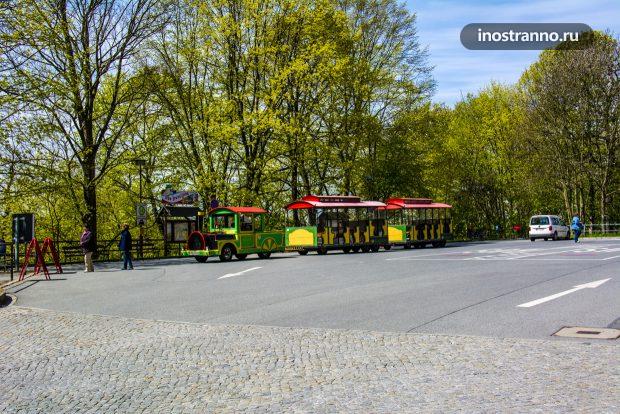 One of the entrances to the fortress (castle gate). In the fortress you can see about 50 buildings, which works military-historical museum exhibition: barracks, warehouses, brig, stables, catholic chapel, etc. 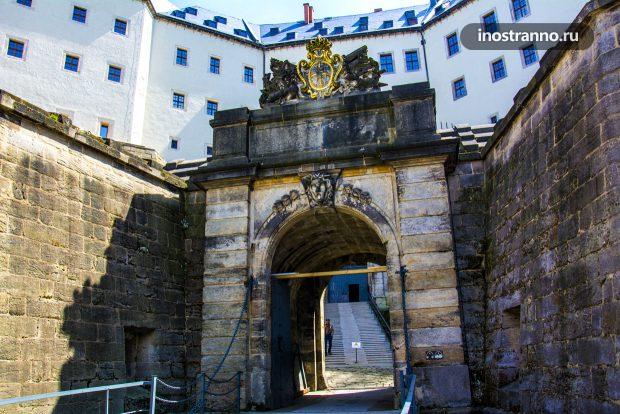 You can climb the fortress on a panoramic elevator. 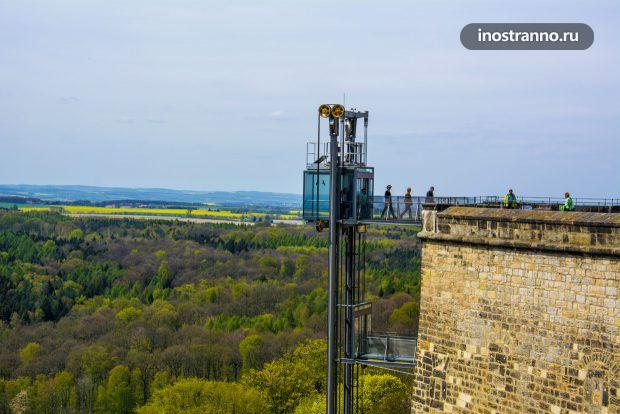 You can walk around the fortress and view the surrounding area. The territory of the fortress is huge, and prepare to spend here a couple of hours. 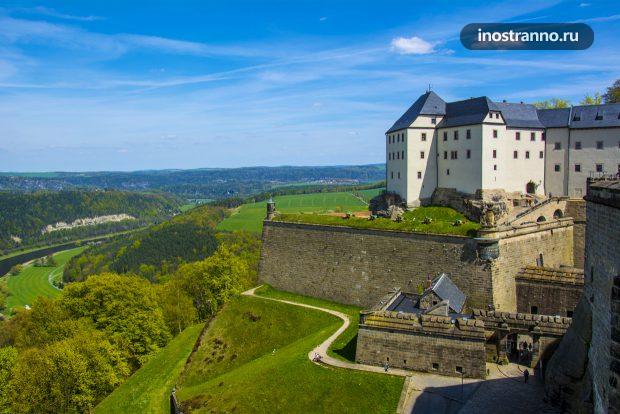 Basic facts about the Königstein Fortress: 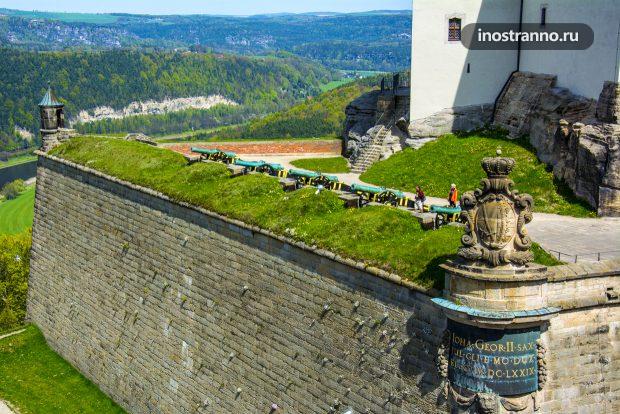 The area of the castle completely restored, everywhere flowers, benches. 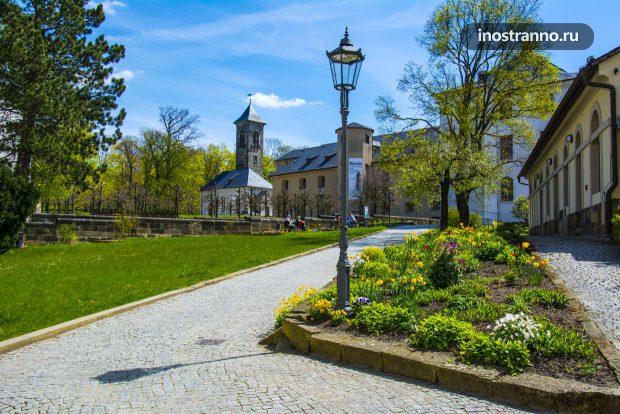 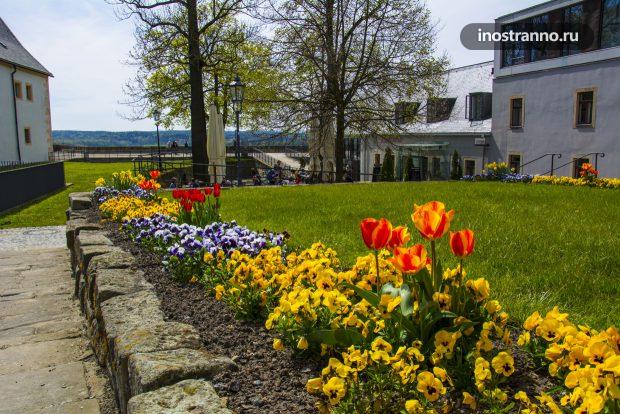 From the height we can see the piers for ferries and railway station. By the way, transport has always been well developed in Saxony. And in Konigstein one of the world’s first trolleybuses was built, which, however, didn’t operate for long: from 1901 to 1904. 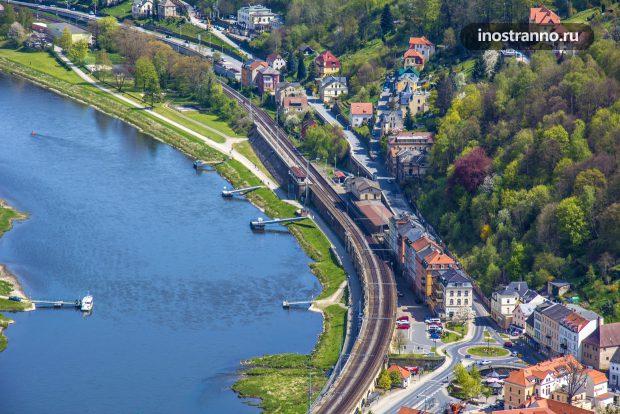 The border between Germany and the Czech Republic is very close, and from the Czech side, the national park is called “Czech Switzerland. At the end we admire the views of the neighborhood and go to other places of interest. 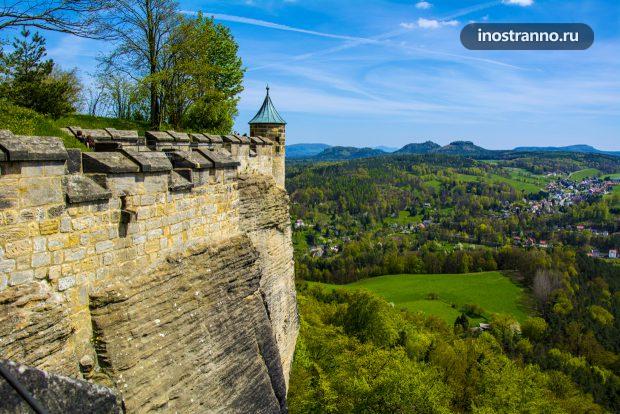 Bastei is a famous bastion at 305 meters above sea level with a viewing platform. Bastei is also famous for one of the most beautiful bridges in the world built in 1851. 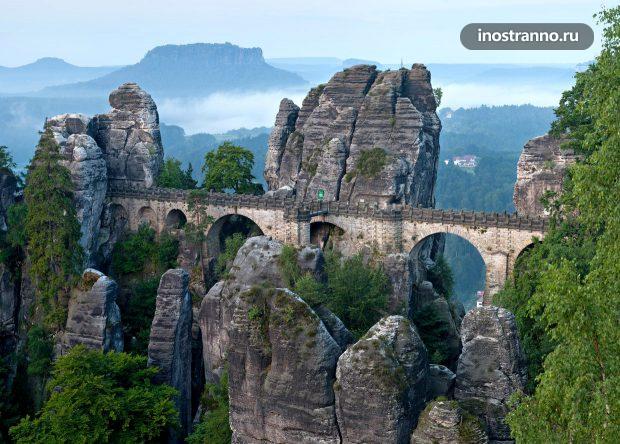 The next point of the walk is the spa town of Stadt Wehlen. The town has a central square and church, beer gardens with terraces, cozy hotels on both sides of the river, and a quiet, peaceful atmosphere. 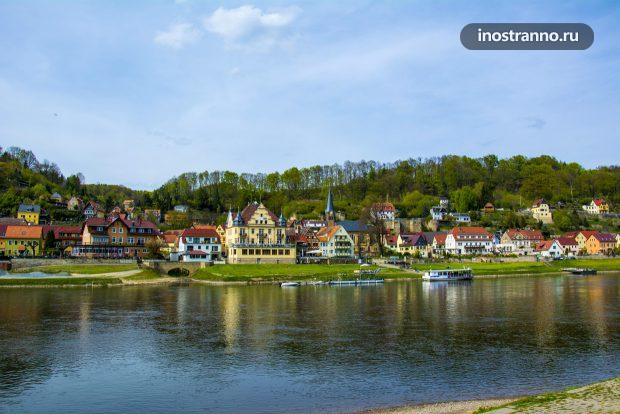 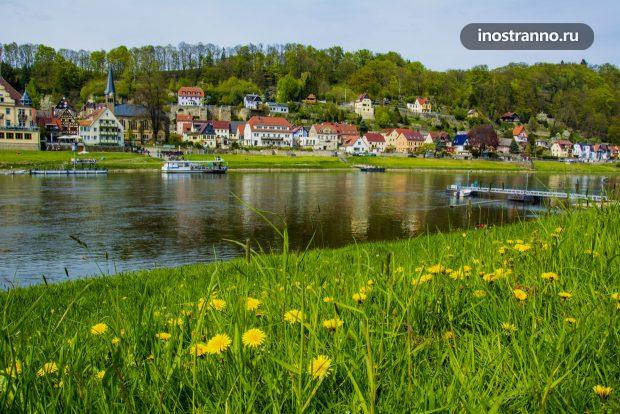 Along the Elbe in Saxon Switzerland there are numerous cycle paths that connect almost all the towns in the region. At the weekend, the Germans head here for cycling and rollerblading. 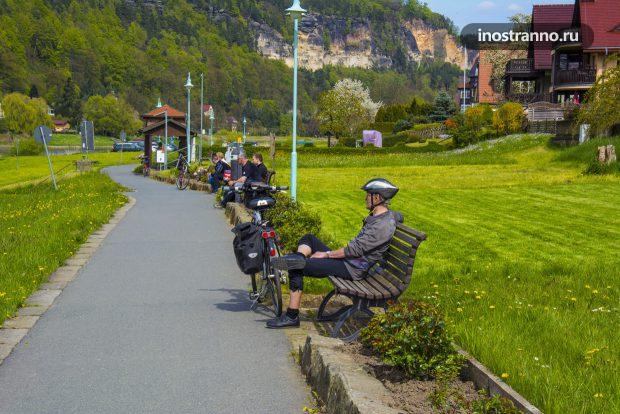 In the spring, this region blooms and is filled with the scents of magnolias, apple trees, cherry trees, and the blossoming trees perfectly decorate the already beautiful restored homes of the locals. It is in the spring that I recommend visiting Saxon Switzerland, as it is very hot here in the summer, and in the fall and winter it is quite dull and windy. 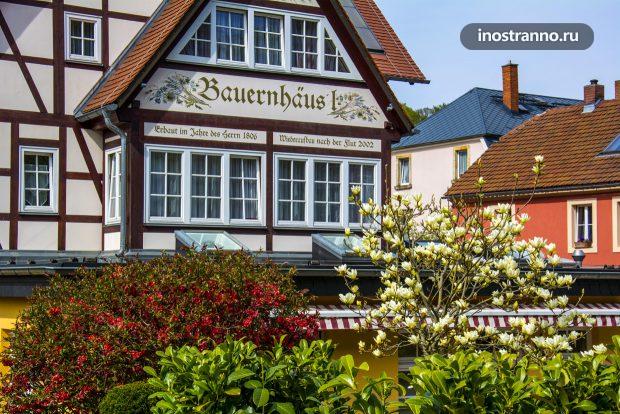 I have already said that you can get to Königstein Fortress by boat. On the way you will come across small palaces and castles. There are a total of 2,000 castles in Saxony, about the same as in the Czech Republic. In the picture you see Pillnitz Palace (Schloss & Park Pillnitz), which consists of three buildings: the Water Palace, the Highland Palace, and the New Palace. Pillnitz was the country residence of the Saxon monarchs, and now the palace has been restored and is on the World Heritage list. The palace has a botanical garden with many flowers, a greenhouse and a pond with a large fountain. 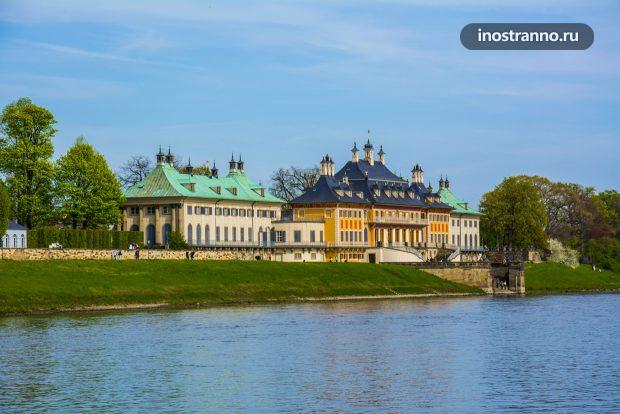 In addition to the places described in the article, I will list other attractions of Saxon Switzerland:

Practical information and how to get to Saxon Switzerland 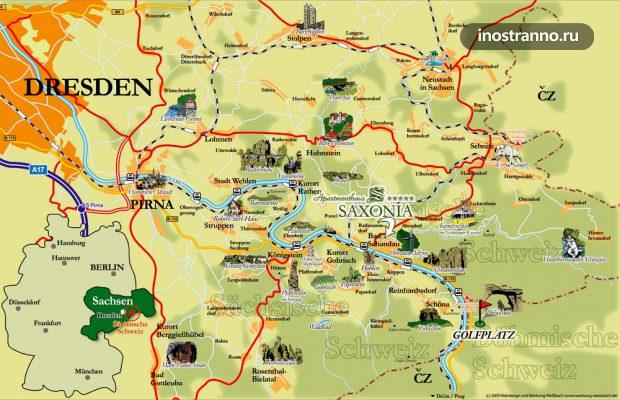 Sites to save money when traveling!

Hotellook – Honestly compare prices and discounts on hotels and apartments in 50 booking systems (Booking, Agoda, Ostrovok.ru, etc.). Plan your trip in advance and save up to 40%!

✈ Find the cheapest tickets without extra charges from trustworthy agencies, official dealers of Aeroflot, S7, Ural Airlines, and all popular airlines around the world.

I was born and grew up in Siberia and have been living in the Czech Republic in Prague since February 2012. In my free time I love visiting new cities and countries. To date, I have been to 36 countries and 400 cities. I love Italian cuisine, swimming in the sea and long walks. I’m a bit afraid of planes, so I understand land modes of transport.

Not far from the German city of Dresden stretches a mountainous area that has long been called “Saxon Switzerland”. Here are a number of small medieval towns, carefully preserved to this day. On one of the highest mountains in Saxon Switzerland, the Königstein Fortress (Festung Königstein), which has been a museum for almost eight centuries, stands out.

The Königstein Fortress Museum is an excellent example of how you can compensate for major gaps in a museum’s collection with the initiatives of local tour operators. Germans not only managed to turn the former royal castle into an attractive historical site, but also create around it an entire tourist complex. 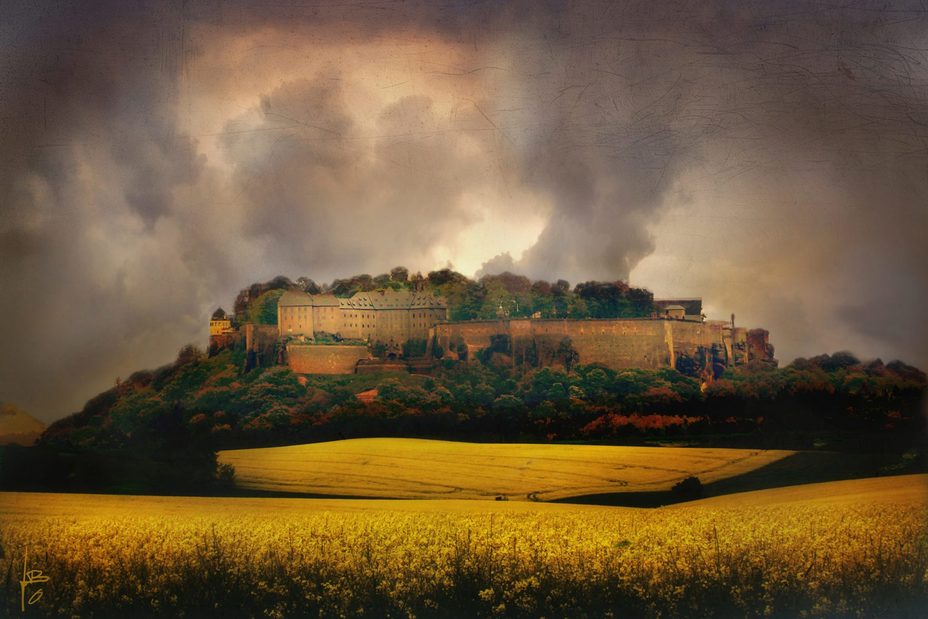 If you’re lucky enough to get to Dresden, it’s worth devoting a day to visit the Königstein Castle-Museum – they’re only 35 km apart, and it’s easy to find a company in town that organizes trips (unfortunately, shuttle buses don’t go to the castle). The castle was built on the so-called Table Mountain, the top of which is almost flat and has an area of 9.5 hectares. The height from the foot to the highest point of the mountain is 50 m, and from the bed of the Elbe River below, the fortress is 240 m high. 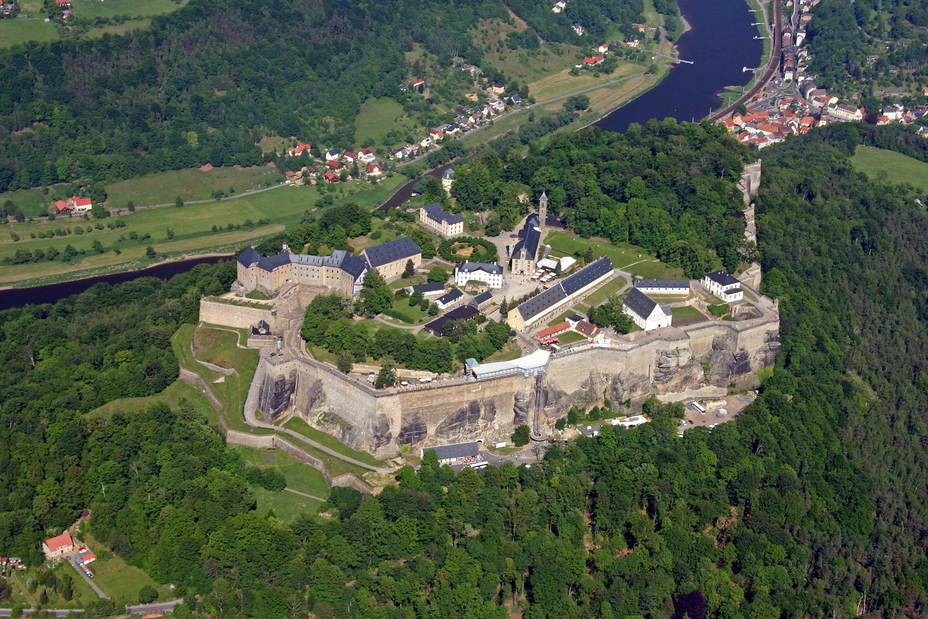 A bird’s eye view of the Königstein fortress. Bohemian-tour.cz

Surprisingly, such a convenient place for defense attracted the attention of monarchs not so early – the first mention of the fortress dates to 1233, when it became an outpost of Bohemian King Wenceslas I. In 1459 the mountain went into the possession of the Margrave of Meissen, and in 1516 the Saxon Duke George Beard founded a monastery on it. After the duke’s death in 1524, Saxony became a Protestant country, and the monastic buildings were incorporated into the fortress. Between 1563 and 1569 a well was drilled into the rock for the needs of the garrison, which is 152.5 m deep and is the second deepest in Europe. Despite the existence of the well, the museum complex still lacks a water supply, collecting rainwater in underground cisterns. 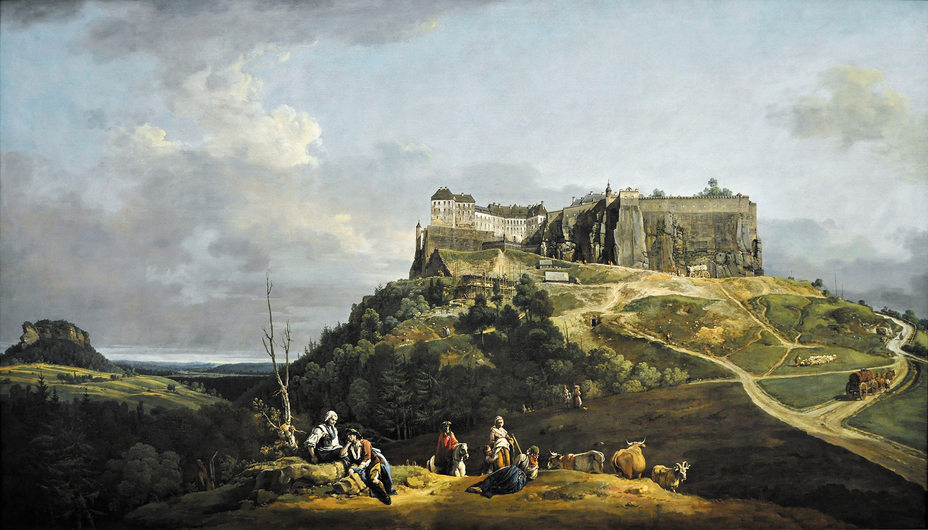 The final transformation of the castle into a mighty fortress occurred at the end of the 16th century thanks to the Saxon elector Christian I and his heirs. The castle was subsequently rebuilt in 1619-1681 and 1694-1756. In the first half of the 1720s, the Elector of Saxony, King of Poland and Augustus the Strong, Grand Duke of Lithuania, had a wine tank built there with the capacity of nearly 250,000 liters. It is interesting that it was filled with local wine only once, and in 1818 it was finally emptied and never used again. 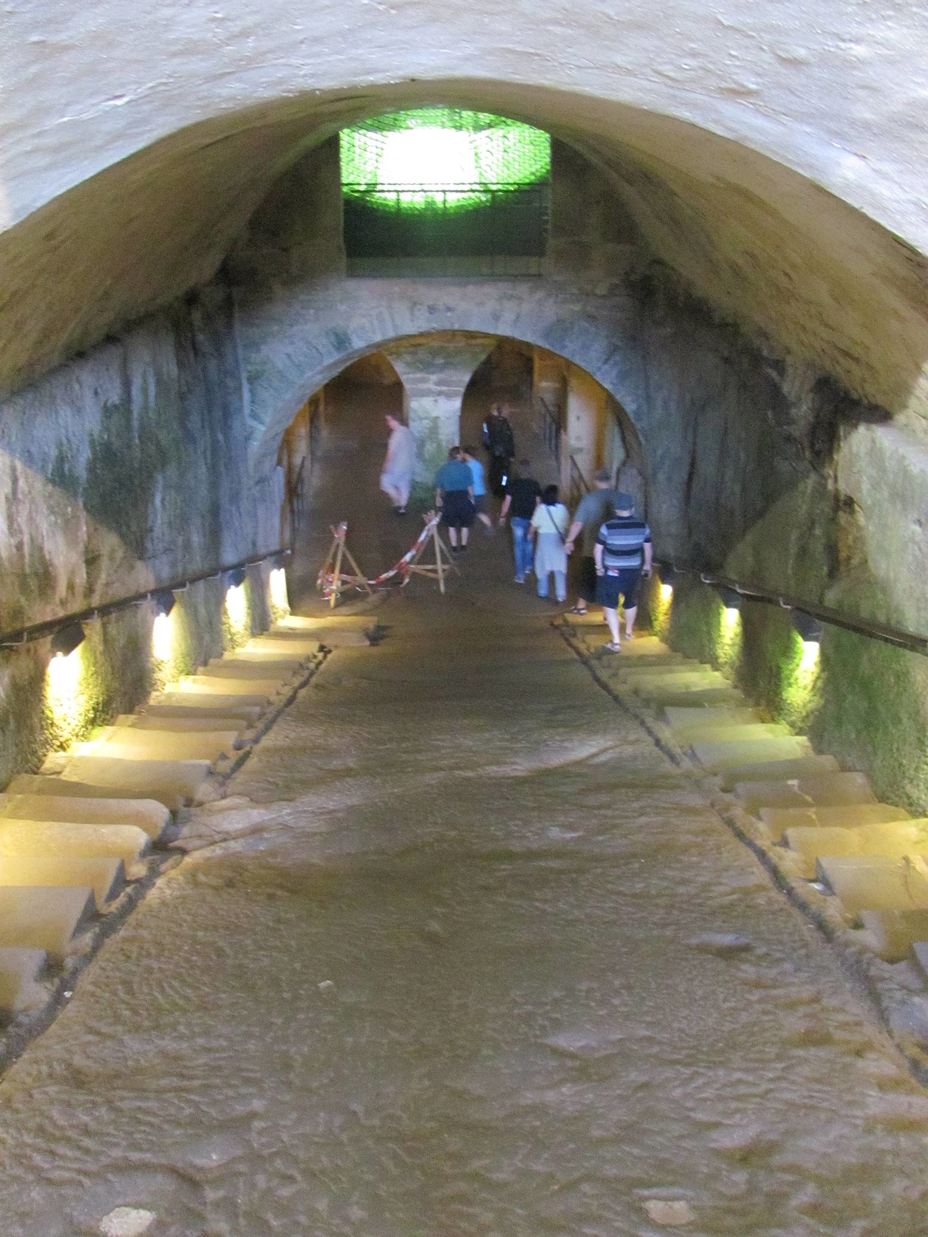 The entrance to the wine cellar. Between the steps in the rock is a ramp for descending and ascending the wine barrels. At the top is a window in which illuminated green glass wine bottles are laid out. Photo by the author

In the XIX century, construction did not stop. In 1855, the royal treasury was moved into the castle, and later it was joined by the state archives and a prison, which was open until 1922. One of the most famous prisoners of the castle in the early 18th century was the alchemist Johann Friedrich Boettger, who was the first European to discover the secret of Chinese porcelain and thus made his ruler Augustus the Strong and his descendants the richest men in Europe (the Elector was the founder of the famous Meissen manufactory). In 1849-1850 the anarchist theorist Mikhail Bakunin spent his days in prison, and in 1872-1874 the future first leader of the German Social Democrats, August Bebel.