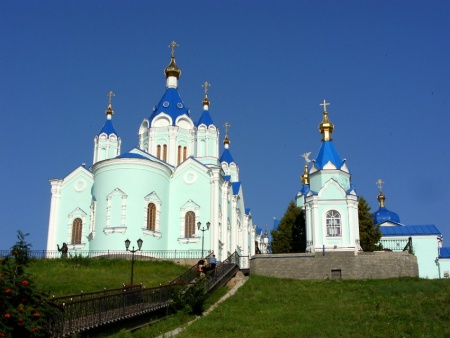 Kursk Root Christmas Mother of God Hermitage, a monastery in the Kursk region, founded on the alleged site of the apparition of the Kursk Root icon.

About the monastery [ edit ]

Among the ancient Russian monasteries, one of the most famous since long ago is the Kursk Root Monastery of the Nativity of the Blessed Virgin Mary.

It is situated above the high sandy bank of the river Tuskar in the village of Svoboda, not far from the city of Kursk. The monastery was founded in 1597 by order of Tsar and Grand Duke Fedor Ioannovich on the place of finding the wonderworking icon of the Kursk Root Icon of the Sign. The first rector of the monastery was Hegumen Evphimy. The monastery was named in honor of the icon of the Most Holy Mother of God found at the root of a tree and therefore called The Root.

Today the monastery has 35 inhabitants. The holy archimandrite of the monastery is the Most Reverend Herman, Metropolitan of Kursk and Rylsk. His vicar is Hegumen Seraphim (Kotelnikov). Divine services in the monastery are held on a full diurnal cycle. Prayers are served daily in front of the list of the miracle-working image of the Mother of God “The Sign”.

It was not by human will, or “accidental” coincidence, that this place was chosen for the salvation of human souls. The Queen of Heaven herself pointed to it by the miraculous appearance of Her Image at the edge of a remote forest. Prayer has been unceasing here for more than seven centuries since then.

It is common for monasteries to have several temples. Our monastery is no exception. The main monastery church – the Cathedral of the Nativity of the Most Holy Mother of God – was consecrated by His Holiness Patriarch Kirill of Moscow and All Russia on 24 September, 2009, the right side-chapel was consecrated by hierarchal tier on 22 December 2011 in honour of the Nativity of John the Baptist.

Worship services are conducted mainly in the Cathedral Church, as well as on feast days and in the other churches of the monastery.

The holy springs on the territory of the monastery have not dried up either. As before, the holy water from the life-giving springs of the Root hermitage gives strength and strengthens the faith of Orthodox people. There are several holy sources in the monastery:

There are also fonts for ablutions at the place of the apparition of the miraculous icon and the source of St. Nicholas.

Kursk icon of the Mother of God “The Sign” [ edit ]

Orthodox icon of the Mother of God with the Child, surrounded on its edges by images of the Lord of hosts and Old Testament prophets, revered as miraculous, belongs to the Orante (Sign) iconographic type.

According to legend, the icon was found on September 8, 1295, the day of the Nativity of the MostHoly Mother of God, in a forest not far from Kursk, which had been burned by the Tatars. A hunter found a small icon lying face down on the root of a tree, and when he lifted it up to examine it, a spring gushed out from where the icon lay. On this spot, together with his comrades, he cut down a small chapel, where they placed the icon.

During the Civil War, the icon was in the Kursk Znamensky monastery. At the end of October 1919, when the troops of General A. I. Denikin were leaving the city, the icon was taken out of Kursk. Its further way passed through Belgorod, Taganrog, Rostov-on-Don, Ekaterinodar, Novorossiysk.

Prelate Seraphim of Sarov was born and grew up in Kursk. In 1767 he became seriously ill and his parents had no more hope for his recovery. However, the Mother of God appeared to him and promised to visit him and heal him of his illness. A few days later, on the 9th Friday after Easter, the annual procession with the Kursk Root Icon passed through their street. Because of the sudden onset of rain, the procession went into their courtyard. The icon was carried over a sick child and he came to touch it. The sick man soon recovered.

It is also noteworthy that after this healing, Cross Processions in Kursk province were forbidden for 30 years because of numerous complaints from clergy to Catherine’s court about the disorder and poor organization. There were especially many complaints during the last Stations of the Cross before the 30-year ban.

In July 1966 Archbishop John of Shanghai (now canonized, commemorated June 19, N.S. / July 2, N.S.) visited the parish of St. Nicholas with the Kursk-Root icon of the Mother of God in Seattle. He passed away on July 2 while praying before the icon in his cell.

A men’s monastery in the Kursk region, the locality and the historical and cultural center of it all is the Kursk Root Hermitage.

One of the mass places of Orthodox pilgrimage in Russia is the Nativity of the Virgin Monastery, also called the Root Hermitage.

The Kursk region has become the location of this Christian shrine, which is equated in importance with the Diveez Monastery near Nizhny Novgorod.

The legend of the origin of the Root hermitage monastery

The name “Korenaya” appeared due to the fact that the famous monastic monastery was built in honor of the Root Icon of the Mother of God “The Sign”.

According to a legend, in the 13th century a local hunter found this image of the Mother of God near the roots of an elm tree. Two centuries after the discovery, a monastic monastery was founded not far from the site on the right bank of the Tuskar River.

Nowadays this area is occupied by the Church of the Icon of the Mother of God “Life-bearing spring”.

An old legend says that after a hunter raised the icon, a spring began to gush out of the ground near the roots of an elm tree and the water turned out to be healing. Right above this place was built a church, where for a long time were the roots of the famous tree. Then, the spring was taken outside the church, and on the bank of the river a bathing place was built of wood. Besides this spring, there are several other springs in the monastery’s vicinity, the water of which is also considered to be healing.

The pilgrimage to the desert and the springs goes on all year round.

The temple that towers over the spring and other monastery buildings were built not so long ago. After the October Revolution, the Bolsheviks ruined the hermitage. The Church of the Nativity was completely destroyed, the Cathedral of the Nativity was blown up, and a canteen was made in the All Hallows Church.

Only the prosphoria, one of the tiers of the bell tower and the Holy Gate remained intact. The modern white and blue building of the monastery was erected in new times.

Today the Root Hermitage is a place of orthodox pilgrimage of believers from all over the country.

The Monastery of the Nativity of the Virgin Mary is located near the village of Svoboda. Once the famous Russian artist Ilya Repin painted his work “Religious Procession in Kursk Province,” which showed the full extent of the Orthodox ritual. In those days, the column of the participants in the Cross Procession stretched for 30 kilometers, separating Kursk and the desert.

Today this ritual is gradually reviving, despite the fact that the icon of the Mother of God “The Sign” itself, after traveling through Europe, ended up in the U.S. and is now in the Cathedral of the Sign in New York.

Lately it has been frequently brought back to the walls of her native monastery.

The Root Hermitage (Kursk region) contains on its territory not only church buildings, but also a sculpture dedicated to the finding of the icon, as well as a monument to Seraphim of Sarov. The holy staretsman once visited these places and healed here with the help of the miraculous icon of the Mother of God “The Sign”.