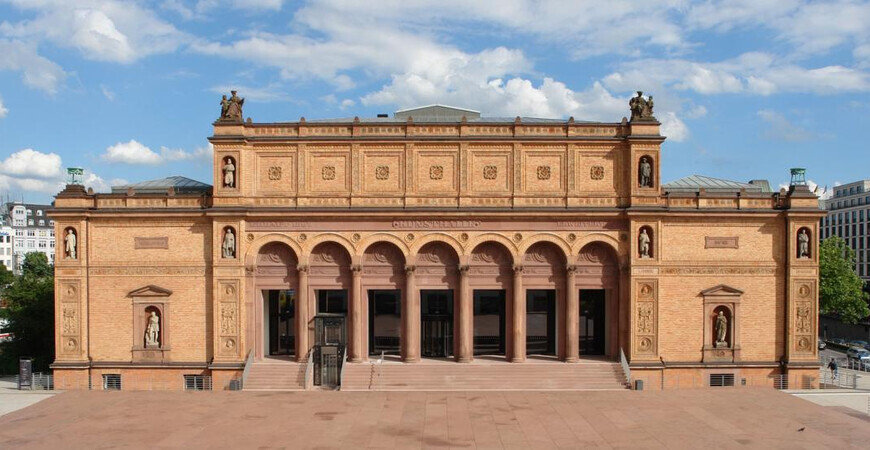 The largest art museum in Germany – Kunsthalle, occupies a leading place in Europe, each year it attracts thousands of tourists to Hamburg.

The construction of the building took about six years (1863-1869). Funds of the Kunsthalle occupies three connected buildings, the total area of 20,000 square meters. The museum’s collection traces the development of art from the Gothic period to the present. In addition to paintings there are sculptures, coins and medals.

Kunsthalle is one of the main attractions in Hamburg and is worth a visit even if you do not consider yourself a big fan of art. Like the Hermitage in St. Petersburg or the Tretyakov Gallery in Moscow, the Kunsthalle is one of the most visited cultural sites in the city and is a place where you can soak up the atmosphere of bygone eras and see how art has changed over the centuries.

Museum Kunsthalle on the panorama:

The Hamburg Kunsthalle is open 6 days a week. Monday is the day off. From Tuesday to Wednesday and Friday to Sunday the museum is open from 10:00 to 18:00. Thursdays are 10 a.m. to 9 p.m. If Thursday falls before a holiday, opening hours are reduced to 18:00.

Cash registers close 30 minutes earlier. The schedule may change on public holidays, this is reported in advance on the museum website.

The cost of admission tickets depends on the category of visitors and time of visit:

The Kunsthalle collection is divided into four galleries covering eight centuries. The most valuable items are used to create permanent exhibitions. Temporary thematic exhibitions are organized to familiarize the general public with the collections. You can find a timetable on the official Kunsthalle website.

The gallery features paintings from the early 15th century to the late 18th century. The focus of the exposition is on the study of North German medieval painting. The most valuable exhibit of the Kunsthalle is the “Altar of Grabow” by the German painter Master Bertram. It was painted in 1337.

Also in the gallery you can see works of the European Renaissance and Italian Baroque, enjoy paintings by Lucas Cranach, Hans Holbein Jr., Jan Masseus, Bernardo Bellotto, Giovanni Battista Tiepolo, Francisco Goya and many others.

The art gallery at the Kunsthalle on google panorama:

A huge collection of paintings and sculptures created between 1900 and 1960 are devoted to Modernism in the Kunsthalle. Fans of this artistic style will appreciate the collection. Among the genre’s highlights are Edvard Munch, Pablo Picasso, Francis Bacon, James Ensor, Ernst Ludwig Kirchner, and Emil Nolde.

An overview of the exhibition halls:

Established in 1997, the contemporary art collection occupies more than 5,000 square meters and is housed in several rooms of the Kunsthalle. Among the most significant works are paintings by Pablo Picasso, Otto Dix, Adolf Menzel, Andy Warhol and many other famous painters of the 19th and 20th centuries.

In addition, the Kunsthalle has a huge wing devoted entirely to contemporary works. Among them are famous works in the style of pop and video art, photography and conceptual art.

How to get to the Kunsthalle Hamburg

The Kunsthalle Hamburg Art Museum has good transport accessibility. Hamburg Central Station and the subway station “Hauptbahnhof Nord” are a couple of hundred meters away. and the bus stop “Kunsthalle” is located directly opposite the building.

Residents and tourists can also get to the complex by car or by cab, which can be easily called from mytaxi, taxi.eu, Uber.

The Kunsthalle can be reached quickly by train from Hannover, Berlin, Cologne, Munich, Bremen, Kiel and other German cities. There are also U-Bahn and S-Bahn lines of the city trains.

A map of the station, train layouts with stops and timetables can be found on the Hamburg railroads official website.

The Hauptbahnhof Nord subway station is only 350 meters from the museum. There are two lines here: the red U2 and the blue U4.

Bus number 112 goes to the “Kunsthalle” stop. See the timetable and route here. 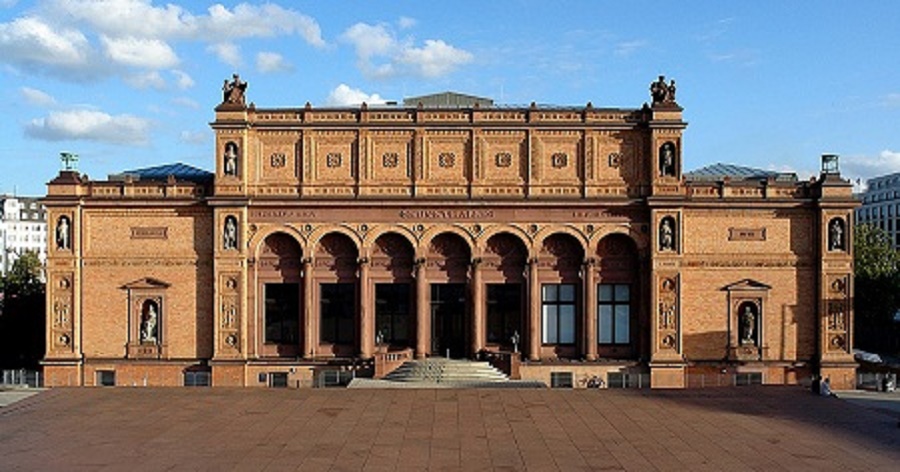 In the center of Hamburg is the Kunsthalle Art Museum, which from afar attracts the attention of passersby with its unusual architectural forms. Three buildings, as if intertwined with each other, were built at different times in history – in 1869, 1921 and 1997. The sight of such an unusual construction makes one want to return to the Kunsthalle again and again to rediscover the fascinating works of art housed in each of the many corners of the museum.

And there are countless exhibitions and expositions to explore: the Kunsthalle Kunsthalle is 20,000 square meters in size, making it the largest art museum in Germany. The museum shows paintings of different European art styles and schools (from Gothic to modern works), sculptural works of the 19th-20th centuries. In addition, the museum exhibits an extensive collection of drawings, drawings, watercolors, ancient coins and medals from the Renaissance to the present. 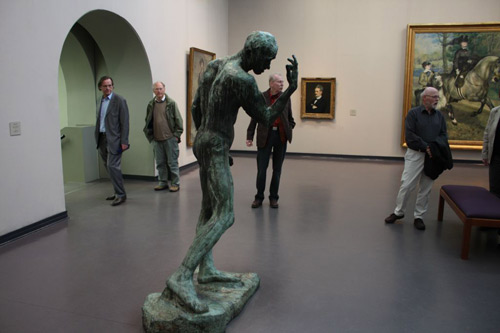 As mentioned above, the Kunsthalle contains in its collections all the directions of fine art that existed in Europe, but the central place in the exhibition activities of the museum is given to German painting. Among the representatives of the 19th century the Kunsthalle lists Marais, Feuerbach, Becklin and many other famous masters. 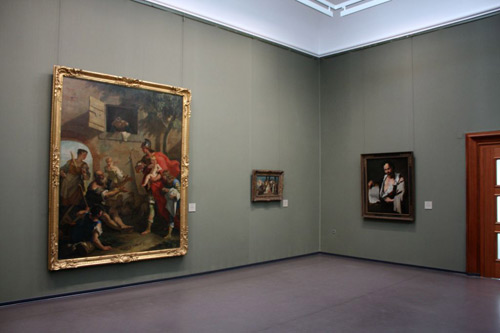 Decent exhibits are dedicated to art of the old masters’ school as well as the more modern trend – modernism. The museum’s engraving room offers its visitors a vast collection of 100,000 pieces. Representatives of modern art are represented by exhibitions in the entire complex of rooms. Works by such famous artists of the last decades as Andy Warhol, Joseph Beuys, Georg Baselitz and others are exhibited here.

In the Middle Ages a fortress wall used to stand where the interlocking buildings now stand, protecting Hamburg from enemy attack. But over the centuries the former outskirts of Hamburg became the center of the city. In 1817 the citizens of Hamburg formed a union of art lovers, whose members later took the initiative to open an art museum in the city. Soon the city authorities met the association and allocated a plot of land for the construction of the museum. 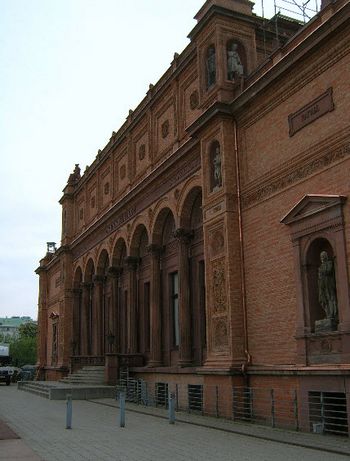 The Kunsthalle brick building was built from 1863 to 1869, and almost half a century later (1912-1921), another structure was constructed for the needs of the museum. A light material – shell limestone – was chosen for the construction of the extension, and the dome topping the building made the new structure memorable. 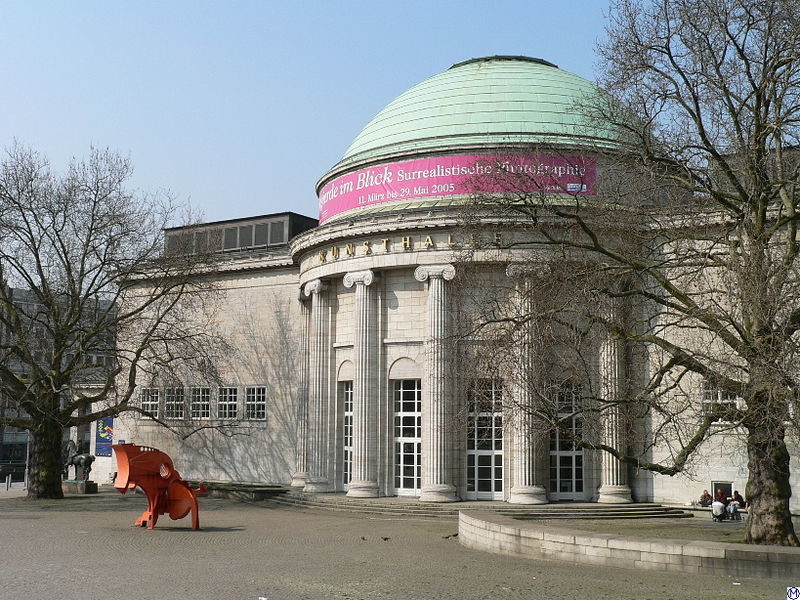 In its early years, the Kunsthalle Art Museum in Hamburg could not boast a variety of collections. At that time the collections were enriched mainly by donations, which were works of art that suited the tastes of their own age. The situation improved considerably with the first director of the Kunsthalle, Alfred Lichtwark, who took up the post in 1886. Director Lichtwark paid great attention to the systematization of the museum’s scattered collection. During his reign, the museum acquired a Medieval Art Department, of which Bertram and Franke are one of the outstanding representatives. 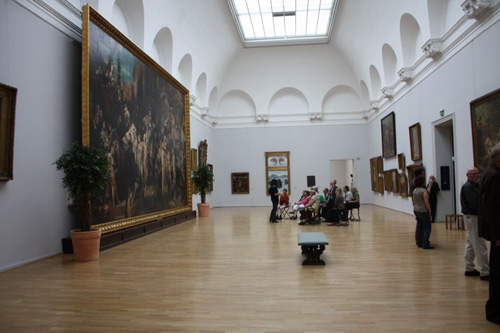 The first exhibits of the museum

Of considerable interest is the collection from that period, which includes paintings of various views of Hamburg by Max Liebermann, Lovis Corinth, Andreas Zorn, Édouard Vuillard, Pierre Bonnard and other artists. Through Alfred Lichtwark, the general public was introduced to the works of Caspar Friedrich and Philipp Runge. Lichtwark also purposefully acquired for the museum’s collections canvases by artists of the period – von Menzel and Leibl.

It was thanks to Lichtwark that impressionist paintings first appeared in the Kunsthalle. 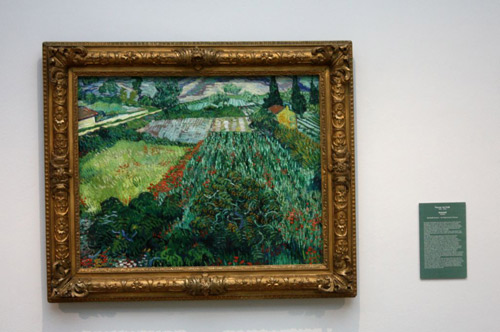 Painting in the museum

During his rule about two and a half thousand coins and medals were acquired, the main part of this acquisition formed the basis of the Coin cabinet. The collections of the Engraving Room and the collections that made up the exposition with paintings by Dutch painters found their way into the Kunsthalle Art Museum largely through the wills of patrons of the arts. 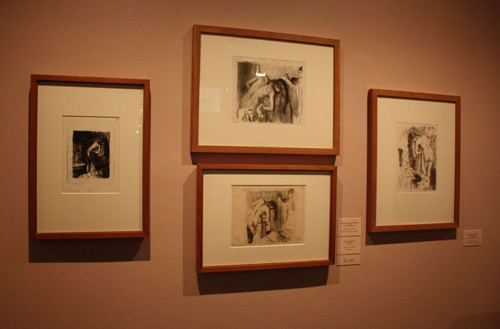 Lichtwark’s successor as director was Gustav Pauli, under whom the museum’s holdings were greatly enriched by works by expressionist artists (Oskar Kokoschka, Franz Marc and others). Unfortunately, many of the museum’s collections suffered in 1937, when the ruling Nazi party declared a number of works of art “degenerate” art. As a result, several dozen paintings were confiscated from the Kunsthalle and destroyed.

In 1997, the Kunsthalle in Hamburg opened the doors of another of its buildings to visitors. The new building is called the Gallery of Modern Art and therefore exhibits works by present-day masters. 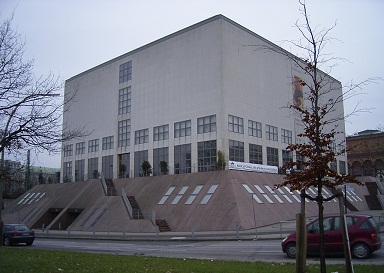 The Kunsthalle is open to visitors every day except Mondays and public holidays.