High in the Troodos Mountains (the northwestern part of the mountain range) is the main attraction of the island – Kykkos Monastery on Cyprus. It is also called “Royal” because it was founded by a Byzantine viceroy.

“Kikkos” in Greek, is a type of oak tree in Cyprus, near which, according to legend, the hermit monk Isaiah once received a divine sign to establish the monastery.

You can get to Kykkos Monastery on Cyprus by yourself or with an excursion. The road will take you 2-3 hours, it is 200 km from Protaras. Tours to the monastery are often combined with a visit to the legendary Mount Olympus.

Tip. If you decide to reach the Holy place on your own, be careful! The route goes along the dangerous Troodos mountain serpentine.

Learn more about the monastery complex

Kikkos Monastery includes economic and residential buildings. Cyprus is famous for the richness of its monastery. Beautiful sweeping arches, amazing mosaic vaults, intact original features of past times, paved courtyards with deep wells – the atmosphere is one of mysterious luxury.

The monastery has the most unique bell tower in Cyprus. The Russian Empire made a valuable gift to the monastery – a large, massive bell with a donation inscription.

Near the abbey, on top of the nearby Mount Tron, a throne was erected. A copy of the legendary Kykkos icon, the main attraction of the monastery, is carefully preserved there.

Interesting things about the monastery

The monastery of Kykkos has been built in Cyprus for many centuries. Epoch after epoch, some building was added to the complex, bearing its own imprint of the time. The monks welcome the pilgrims and allow them to spend the night in their cells free of charge. Matins in the church begin at half past six in the morning.

Cyprus is famous for the monastery’s Cathedral Temple of the rare, three-part form. Almost all of the rich frescoes and murals were created by the hands of the Cypriot iconographer Georgios Georgios. In the central hall there are unique chandeliers, donated by the Tsarist Russia.

Kikkos Monastery on the island of Cyprus is famous for the tomb of the first Cypriot president Makarios III. In his youth Makarius served as a novice in the “Monastery of the Tsar” and his grave is situated on one of the neighboring mountains.

Sights of the shrine

The miraculous icon of the Virgin Mary (Eleusa)

The Monastery of Kykk owes its appearance to this image. According to tradition, the image was created by the Apostle Luke himself and blessed by the Virgin Mary. The sacred image is hidden from prying eyes by a precious canopy. It is said that the icon was hidden from the fact that possessing powerful powers, it is capable of blinding anyone who looks at the open countenances of the Child and the Mother of God.

The face is located in the temple iconostasis to the right of the main Church Gate. Cyprus receives a great number of pilgrims seeking the shrine from all over the world. They come with pleas and entreaties for healing and salvation from disasters. The Holy Mother of God does not refuse anyone.

List (copy) of the image of Our Lady (Joy and Comfort)

This is another jewel of the temple iconostasis. The original image has been kept on the holy Mount Athos for many centuries. The list of the countenance has the same strength and power. In 1977 (in February), the shrine began to myrrh.

Cyprus hospitably welcomes many guests who rush to the legendary holy miracle. After visiting the Kykkos Monastery Church, you can take home a absorbent cotton filled with life-giving myrrh.

Kykkos Monastery has the rarest Louvre in Cyprus, founded at the end of the last century. There is a unique collection of orthodox religions. The exhibits were collected bit by bit. Ancient church incense pots, rare manuscripts and books, candlesticks and candlesticks, embroidery, antiques, clothes of church servants of different epochs. The most important of the exhibits:

The Louvre’s sumptuous halls are filled with subdued Byzantine chant, the floors are lined with marble and granite slabs, and the ceilings are finished with gilt leaf and walnut precious wood.

Visiting the magnificent Kykkos Monastery, the most important shrine in Cyprus, tourists can enter the small store at the monastery courtyard and buy all sorts of souvenirs and various herbal liquors, handmade by local monks. 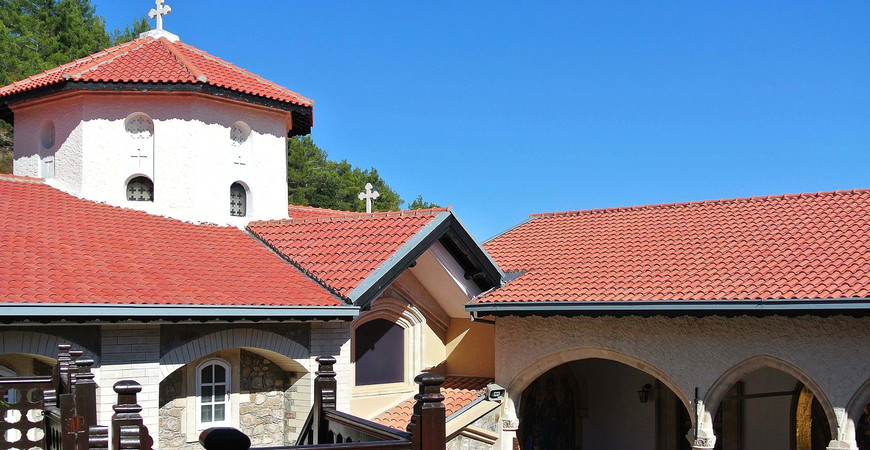 Kykkos Monastery (a male stauropegial monastery of the Cypriot Orthodox Church) lies at the western part of the Troodos Mountains at 1318 meters above sea level, just 18 km from Mount Olympus, the highest peak of Cyprus.

The monastery was founded in 1080 by the Byzantine emperor Alexios I Comnenus (1081-1118). According to the legend, the Cypriot hermit Isaiah cured the emperor’s daughter and as a reward asked for the rarest icon of the Mother of God, which was kept in Constantinople. Thus the shrine was brought to Cyprus and the construction of the Kykkos Monastery began.

In those days the monastery was built of wood and, of course, it has not survived to this day. The first of the fires happened in 1365 and the monastery was rebuilt from wood and stone. The present stone church was built in 1541. From 1571, after the conquest of Cyprus by the Turks, the Ottoman period begins in the history of the monastery. During the years of resistance to mass Islamization within the walls of the monastery were preserved Greek traditions of education, developed art, icon painting, woodcarving. For thousands of people the Kykkos Monastery became at that time a spiritual refuge.

But the construction of the temple continued. In 1745, it was rebuilt, enlarged and made in the form of a basilica consisting of three naves in the Franco-Byzantine style. The iconostasis was built in 1755 and miraculously survived to this day. The icon of the Mother of God itself is located here, in the center of the iconostasis, third from the left of the royal gate. In 1821 the monastery was looted and partially destroyed by the Turks.

All in all, the monastery burned and was rebuilt four times. So the buildings that now make up the ensemble of the monastery were built at different times. For example, the construction of the bell tower dates only from 1882, it has six bells, the largest of which was cast and delivered to Cyprus from Moscow. Most of the frescoes were painted between 1975 and 1993 by Cypriot, Greek and Romanian master iconographers.

In 1986, the Research Centre with an archive and a library was founded. In 1992 the Kikkos Monastery Museum, an exhibition hall and a research center, a unique repository of Cypriot culture and history, were added to the monastery complex. Among its exhibits are unique icons, embroideries, household items, vestments related to different periods of monastic life. Besides the monastery is also famous for the fact that the first President of Cyprus Archbishop Makarios III was a novice here. His grave is on one of the mountains next to the monastery.

Icon of Our Lady of Kykkos

But the most interesting and incredibly popular item on Kikkos Monastery with tourists and pilgrims is the icon of Our Lady of Kykkos which has been held in the monastery’s churches for over 900 years. According to legend, this is one of the three icons of the brush of the Apostle Luke, copies of which are kept in many Orthodox churches around the world. There are many stories of miracles performed by the icon. It is believed that the prayers of Our Lady of Kykkos have more than once saved the island from disasters: for example, from drought or an invasion of locusts.

The icon is also notable for the fact that its face is impossible to see. Back in 1785 it was decorated with a silver case, which completely covered its image, and since then no one has seen it. For what reason this was done, is still not precisely known. But legends say that the face of the icon is too beautiful and miraculous, and whoever sees it will immediately lose his sight. Either way, the icon of the Virgin Mary and its miraculous properties continue to attract many pilgrims to the monastery, eager if not to see the icon, at least to touch it. In addition to the famous icon, Kikkos Monastery holds another shrine that women around the world turn to for healing – a belt that can heal infertility.

The monastery is also famous for its collection of holy relics. The great hall, which communicates with the northern nave, is the repository of the relics of many Christian saints: Saint Luke, Saint Nicholas the Wonderworker, Saint George the Victorious, Saint Spiridon of Trimiphunt, Saint John the Baptist, the Apostle Philip and even Matrona of Moscow.

Kikkos is situated in a mountainous area, almost equidistant from Limassol and Paphos (approximately 60-70 km), the island capital Nicosia is 82 km away, Ayia Napa is 160 km away, Larnaca is 125 km away and Protaras 200 km away.

Public transportation in this case is not the most convenient way to travel. Buses from the resort of Limassol, Paphos and Larnaca will take you to the island capital, Nicosia; then you can transfer to the routes to the nearby villages (Platres, Pedoulas), but after that you will have to take a cab. It is quite a complicated scheme, given that the same complicated way you have to build and way back.

The most convenient way to get to Kikkak Monastery is to take a tour. Since this route is very popular, almost any tour desk of any resort town organizes trips to the monastery every day.

Also, a common way is to travel by car, which can be rented everywhere in any city of Cyprus. This option has its advantages: the incredible views dispose to scenic stops, you may be able to get faster than in an organized group, but at the same time, you must always be alert and follow the directions of the navigator. Mountain serpentine in these places is wide enough, but, nevertheless, requiring increased attention of the driver. An important point is that the traffic in Cyprus is on the left side, which is certainly very unusual for most tourists.

There are parking lots at the entrance to the monastery, they are quite large, but quickly enough filled with cars and buses.

To travel to the monastery you can use the local cab services, but it will be much more convenient to order a transfer in advance on the Russian-speaking service KiwiTaxi: