A trip to Argentina. What is the widest river in the world?

Imagine a river, on the opposite straight banks of which, at an angle from each other, there are two megalopolises – the capitals of two large states. And to get from one city to the other, it is best to use an airplane. After all, they are separated by more than a hundred kilometers. Do you want to say that it is impossible?

But the river does exist, and the capitals have been in their place for centuries. The river is called La Plata and it’s the widest river in the world, because even in its narrowest point its width is 48 kilometers, and at the inflow into the Atlantic Ocean reaches 220 kilometers. On the right bank of La Plata is Buenos Aires, the capital of Argentina, and on the left bank is Montevideo, the capital of Uruguay. What they have in common is that the inhabitants of the coastal regions, both Argentine and Uruguayan, speak a distinctive dialect called La Plata Spanish.

La Plata was formed by the confluence of two rivers, the Parana and Uruguay, and is the natural border between Argentina and Uruguay. The length of the river does not exceed its maximum width and is only 290 kilometers.

If you look down from an airplane window as it flies from the ocean to Buenos Aires, you get the impression that it is a very deep inland sea bay. The same impression is given by simply looking at a map of the Atlantic coast of the South American continent. However, it is actually a river, as the water there is fresh, very muddy because of the huge amount of sundries, which it carries with its rather powerful current, and because of the variety of freshwater animals that live there.

Scientifically, such a one-armed funnel-shaped river mouth, expanding towards the sea, is called an estuary. It is formed when the river has unpaved banks and river loads of silt, sand or soil are quickly and almost completely removed by the nearby sea currents, acting in conjunction with tidal phenomena. In this case the adjoining part of the sea should be deep enough, so that many tons of soil, constantly rushing with water, could disappear there without a trace.

This is how one of the largest estuaries in the world was formed: the speed of the tidal current was combined with the speed of the river flow, thus enhancing the flow of La Plata into the sea.

There are several versions of the formation of the name of the river, which in Spanish means “silver” (La plata). The most common is the Spanish-language one, based on the legend that the Spanish navigator Juan Diaz de Solis named it so. His ship was the first to enter this river in search of a passage to the Pacific. The travelers allegedly came across the natives who were carrying silverware on their boats and shared with them the great secret that somewhere in the depths there is a “Sierra de la Plata”, that is, a “Silver Mountain”. No one was able to find the mythical mountain or the silver deposits, but the name stuck and survives to this day.

However, there is a completely different, this time English-speaking, version. It proceeds from the fact that in English this river is called “River Plate”. Proponents of the first version argue that this interpretation of the name of the river appeared in the same distant years of exploration of the South American continent, because at the time of the Spanish conquistadors, the English word “plate” meant “silver” or even “gold”. However, since it now means “plate”, supporters of the English version are trying to prove that this river was called “plate” by British sailors. Allegedly on its flat bottom during the pursuit of pirate sailing ships often grounded British frigates, which had a lower draft.

The river does carry a huge amount of soil into the ocean, a yellowish muddy trace of which can be seen in the ocean at a distance of up to 120 kilometers from the shore. This happens because the La Plata basin occupies more than 1/5 of all of South America. From this giant area up to 57 million cubic meters of soil are washed into the ocean every year. And although only a small part of it settles in the bed of La Plata, dredgers have to work continuously, deepening the bottom and clearing it of silt, so that giant ships, both cruise ships and those carrying millions of tons of various goods, can sail and sail from the Atlantic to Buenos Aires.

READ
The highest waterfalls in the world

La Plata is not only known for its geometric size, it is also home to some endemics, such as the La Plata dolphin, the only freshwater mammal in the world that has also adapted to life in the salty waters of the ocean. On the other hand, some species of sea turtles are also worthy of interest, feeling perfectly well in the murky river water.

Numerous fishermen, occupying the coast of La Plata, successfully catch from the depths of its freshwater and saltwater fish, from huge catfish and similar in taste to the salmon dorado, to the carnivorous piranha. Otherwise, the diverse wildlife that inhabits La Plata’s waters is similar to the other bodies of water in the area.

Find out where the world’s widest river is 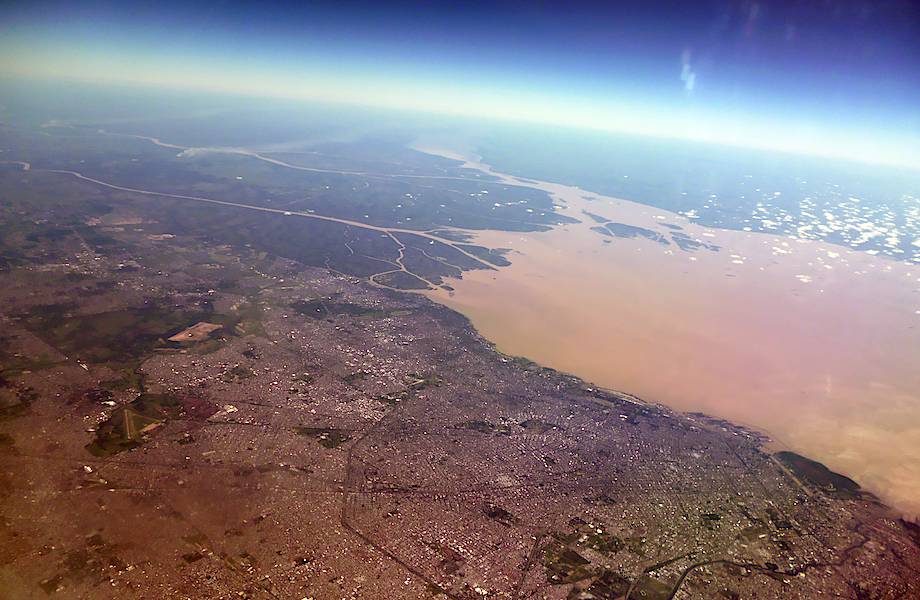 Did you know that there is a river that is 220 kilometers wide? That’s a little less than the distance from Moscow to Suzdal. About this amazing natural wonder TravelAsk wants to tell you today.

The widest river in the world is located in South America. It is called La Plata. At its narrowest point, at its source, it is only 48 kilometers long. Although these figures are impressive, how many rivers have you seen where one bank of the other was fifty kilometers away? At its widest point, at its confluence with the Atlantic Ocean, it reaches 220 kilometers. 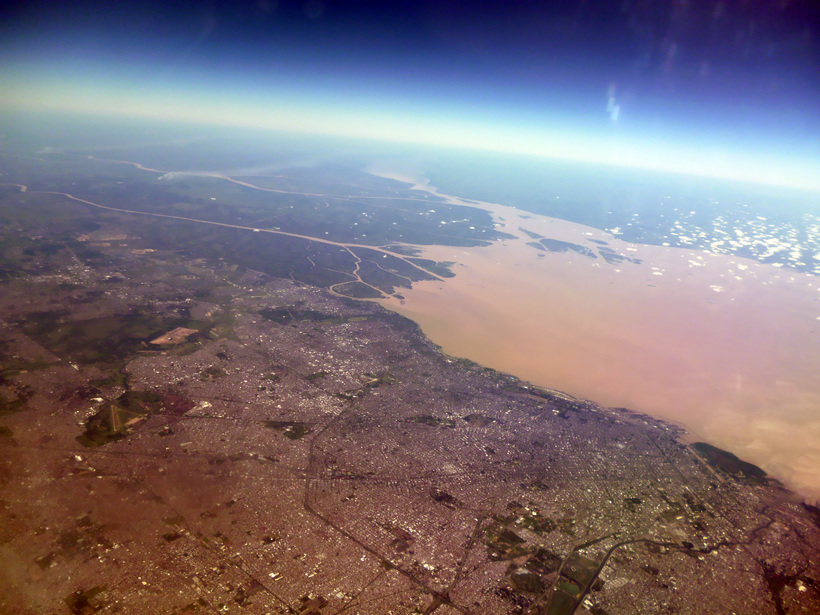 On its opposite banks are two megalopolises, two capitals of different states: on its right bank is Buenos Aires, the capital of Argentina, and on the left is Montevideo, the capital of Uruguay. Thus the river forms a natural border between these states. The people of both countries, who have lived for centuries on the banks of La Plata, speak a characteristic dialect called La Plata Spanish.

La Plata is formed by the confluence of two rivers, the Parana and the Uruguay. Its length is not much longer than the widest place, only 290 kilometers.

READ
The largest desert on earth 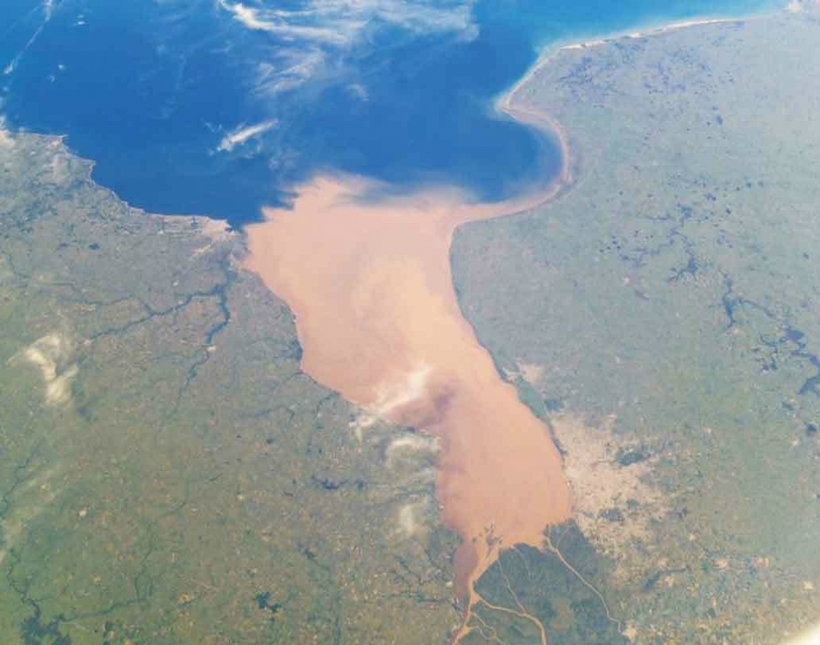 Now let’s talk about statistics. Narrow rivers are usually called reservoirs that are no more than 60 meters wide. Medium rivers are slightly wider: up to 150 meters. And wide ones are anything above 150 meters. Now you understand the enormity of La Plata. Even its source is extremely wide.

Let’s delve into the etymology.

La Plata means “the silver river.” Some believe that silver was found on its banks during the gold rush. However, that’s not quite the case. It is the consonance with the expression “river plate” – which means “flat plate”. The river was so nicknamed because of its flat, flat bottom and for the wide shoals on which ships often landed. 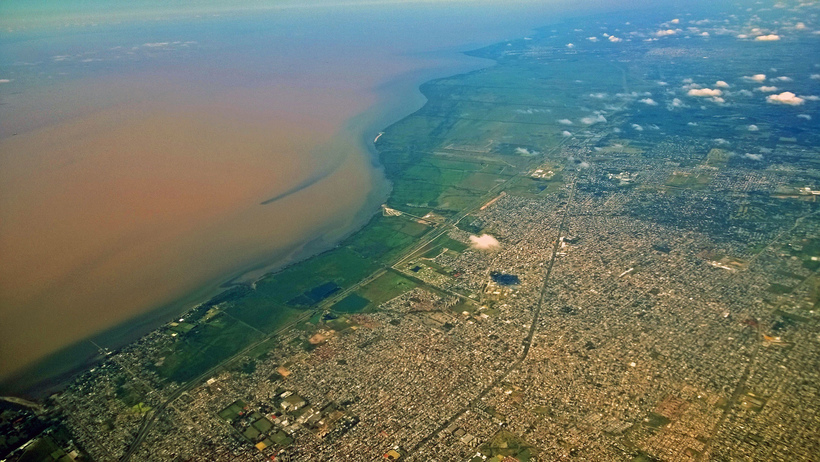 History of the river’s discovery

La Plata was first discovered by Spanish navigators who were looking for a passage from the Atlantic to the Pacific. After landing ashore, the crew was attacked by the natives. Of the entire crew, only one 14-year-old sailor survived.

In 1536, the first European colony, Buenos Aires, was founded on the coast. La Plata also saw military battles. Thus, there were battles near the river during the Argentine War of Independence. And on December 13, 1939, the first major naval battle of World War II between British ships and the German heavy cruiser Admiral Count Spee took place near the river.

The river dwellers of

La Plata, along with its tributaries, is huge: it covers 4,144,000 square kilometers. That’s about one-fifth of all of South America. The maximum depth of the river is about 20 meters. 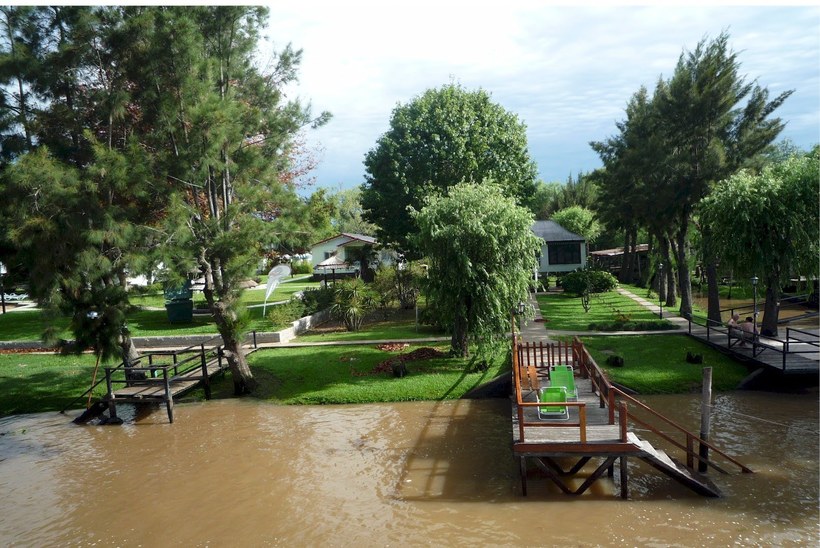 This body of water is home to many interesting animals. For example, the river dolphin, the smallest dolphin in existence, lives on the river. It is called the La Plata dolphin. 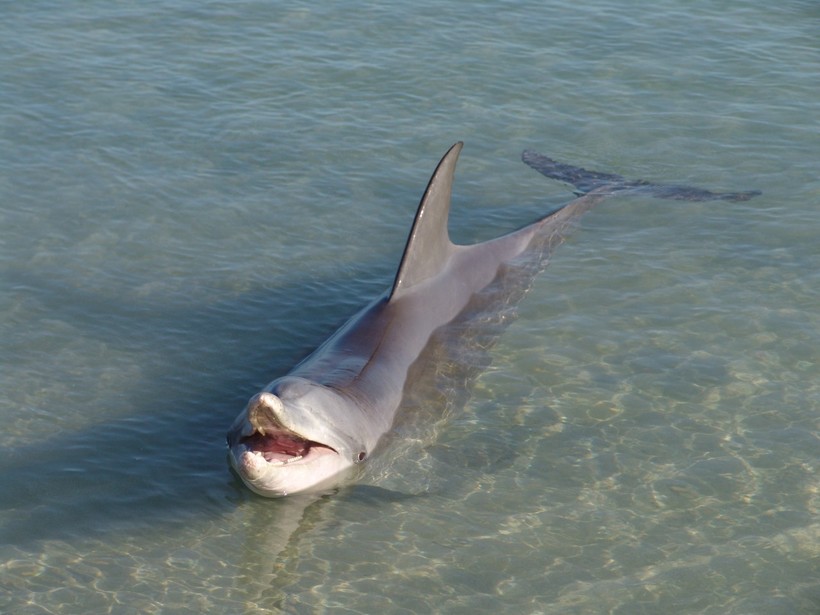 Individuals do not exceed 60 pounds, and the length is usually less than 1.7 meters. In the summer they live in the ocean, and in winter they migrate to the river. It is assumed that these animals are very small – no more than 42 thousand individuals, so they are vulnerable to extinction.

Sea turtles also live in the river: the caretta, green turtle and leatherback turtle. Carriages or loggerheads are very large: about one meter long and weighing up to 150 kilograms. They are listed in the Red Book. 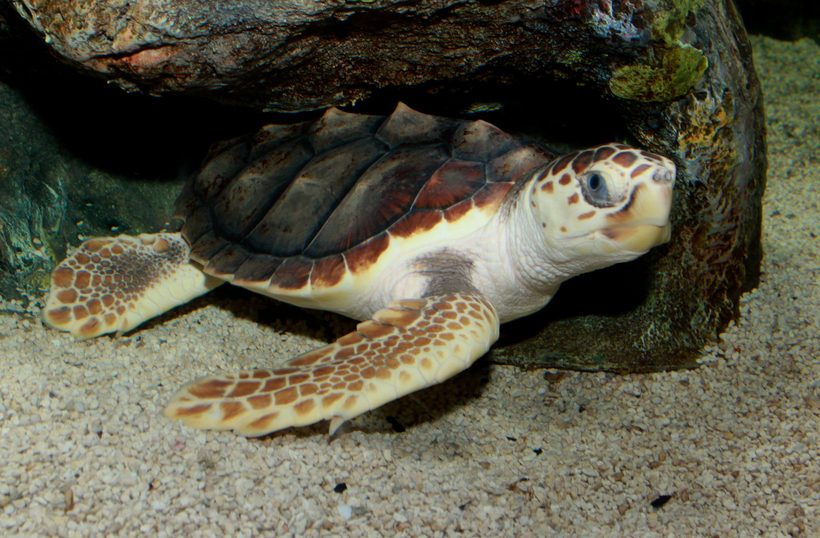 La Plata is also home to many fish.