There are many salt and freshwater lakes in the high plateaux of Bolivia, one of which is shallow Lake Laguna Colorado, or Red Lagoon, as it is also called. This lake is located in the southwestern part of the Altiplano Plateau in the Eduardo Avaroa National Reserve.

The Laguna Colorado water body in Bolivia shatters all the usual ideas about the color of the water. Contrary to the laws of nature, the waters of the lake are not the usual blue or turquoise, but reddish-brown in color. This gives the red lagoon a special color and mystique. Recently, more and more tourists come here. And they are attracted, above all, a fantastic range of colors and extraordinarily beautiful landscapes.

Natural features of the lake

The Red Lagoon in Bolivia covers an area of 60 sq. km, while the average depth of the salt lake is barely 35 cm. There is a rich deposit of borax, a mineral that is the raw material for boron. The borax deposits are white in color, in stark contrast to the rest of the landscape. In addition, large deposits of sodium and sulfur have been found on the shores of the body of water. The Red Lagoon is picturesquely surrounded on all sides by majestic cliffs and boiling geysers.

Red Lagoon Colorado is world famous for its unconventional water color, which depends on the time of day and air temperature. The water takes on various shades of deep red, green, and brown-purple. The variations in color are due to the presence of certain species of algae in the lake, which release bright pigments, as well as sediment deposits in the area. When traveling in Bolivia, visit Laguna Colorado for exclusive photos of the red lake.

It can be quite cold at night, and thermometers often dip below freezing. But in the summer the air warms up very well. The summer months are considered ideal for visiting Laguna Colorado. Due to its natural features, Bolivia’s Red Lagoon claimed the title of one of the new Seven Wonders of Nature in 2007. Unfortunately, it was a few votes short of the final.

This shallow lake full of plankton is home to 200 species of migratory birds. Despite the cold weather, there are about 40 thousand flamingos, among which a rare South American species – pink flamingo James. It is believed that there are very few of these birds left on the planet, but on the coast of Laguna Colorado their huge number is accumulated. You can also see the Chilean and Andean flamingo, but in relatively small numbers.

In addition to rare birds, Red Lagoon is home to several species of mammals, such as foxes, vicuñas, llamas, cougars, alpaca llamas, and chinchillas. There are also a variety of reptiles, fish, and amphibians. Tourists often come to Laguna Colorado to see the local fauna, unreal clusters of exotic flamingos, and of course the fantastic changes in the colors of the water.

How do I get to Laguna Colorado?

You can get to the Red Lagoon Colorado from a town called Tupica, which is near the Argentine border. This route is mainly chosen by tourists traveling from Argentina, as it is not too difficult to cross the border in this place. Visas are issued at the border post for about $6. There are several travel agencies in Tupica that organize car tours of the Altiplano Plateau. The agencies are sure to include a tour of the Laguna Colorado Coast in their program.

However, the bulk of travelers choose the route from the town of Uyuni, which is located north of Tupica. The tourism business here is much better developed, which means that the choice of travel agencies is wider. The travel program is standard, the same as that of colleagues from Tupica. It is a 3 or 4-day off-road Jeep tour of the high altitude plateau Altiplano with a mandatory stop in the Laguna Colorado. Renting a Jeep with a driver and chef costs $600 for 4 days. It is worth noting that the distance of 300 km to the red lagoon can only be overcome by jeep. 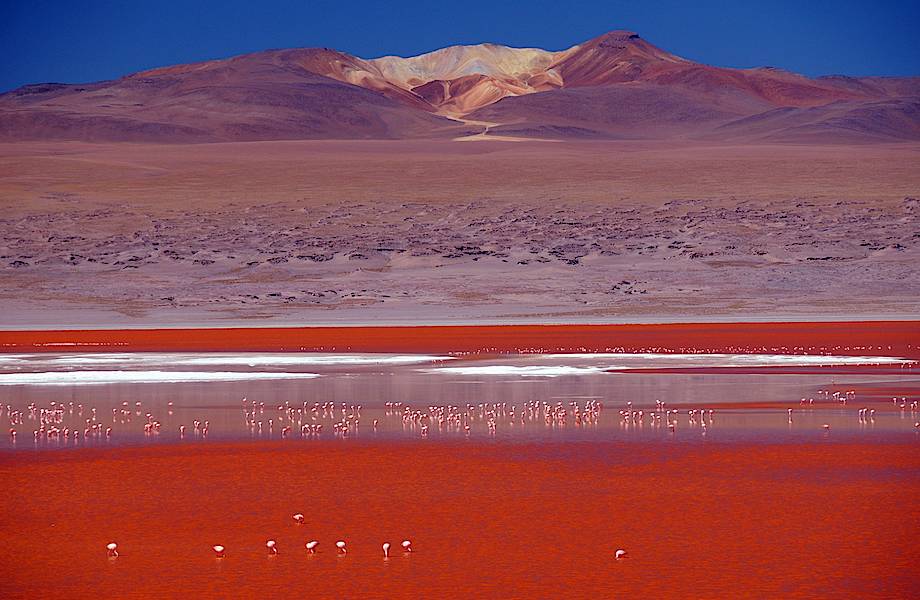 Laguna Colorado is forever in the heart of any traveler in this part of the Altiplano. The stunning pink color combined with the high Andean scenery makes a lasting impression. But even more amazing is the history of this lake, or rather its inhabitants. Laguna Colorado is known as home to the largest colony of the James flamingo, an incredibly beautiful bird species that nearly disappeared. It was long thought to be extinct until ornithologists discovered this feathered bird on Lake Laguna Colorado, its favorite body of water. 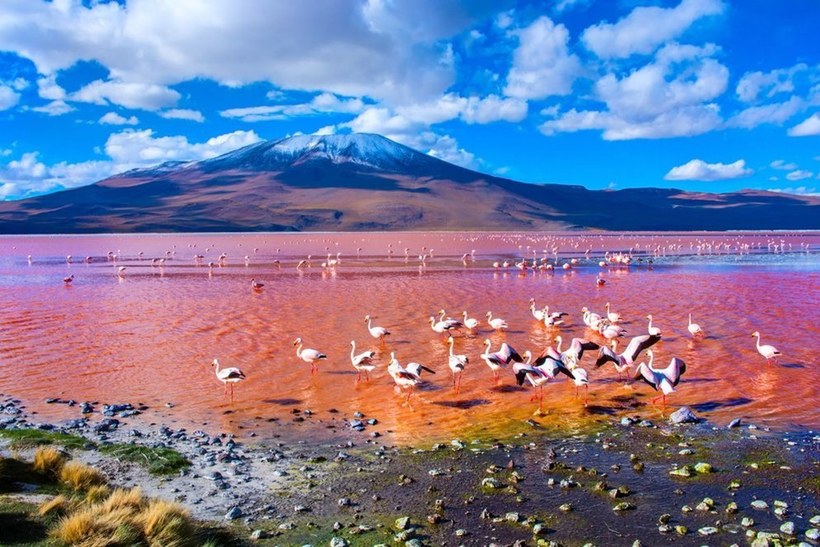 Small salt lakes in the Andean highlands are home to several flamingo species, but it is Laguna Colorado, located in southern Bolivia, that has become the James flamingo’s favorite habitat. This small salt water body is quite shallow and has a maximum depth of only 1.5 meters. In times of drought, the lake becomes very shallow and shrinks in size, and the salinity of its water increases. Nevertheless, even in such uncomfortable conditions there are several species of crustaceans and microorganisms, including algae, which give the water such a fabulous color. 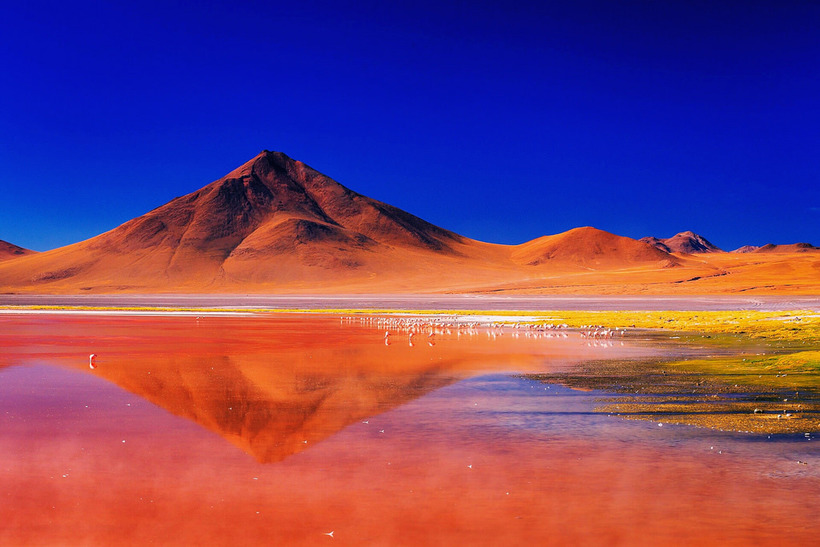 But what attracts the James flamingos here? After all, these are rather large birds that need plenty of food, and the shallow and salty lake does not contain a significant supply of fish. It turns out that flamingos are completely indifferent to fish, they eat other things. Their bodies are adapted exclusively for eating the smallest water inhabitants, crustaceans and algae. These birds have an amazing beak that has special plates around the edges. With their help, they sieve salt water rich in various plankton, which is the main source of nutrients for these birds. 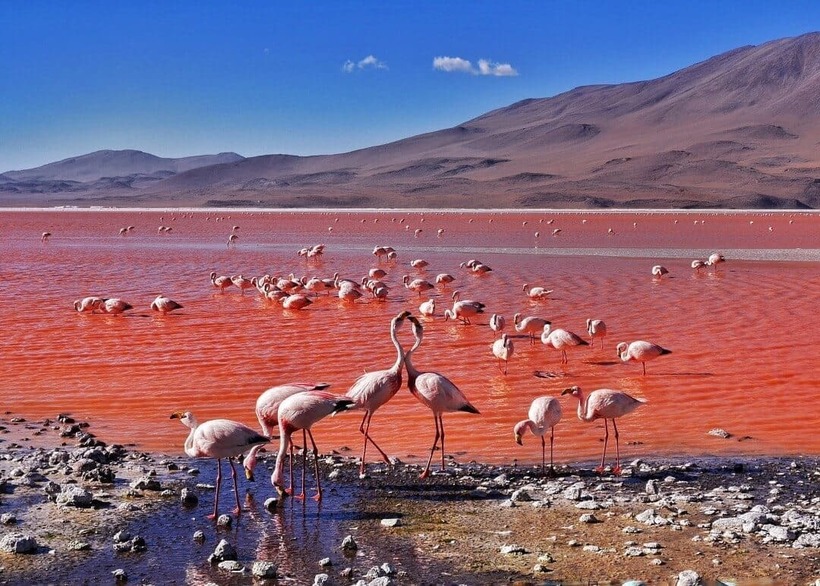 The James flamingo was first described by the English scientist H. B. James, after whom it received its species name. This species was described in detail only in 1886, and only 40 years later ornithologists were forced to recognize its extinction. It is difficult to say why ornithologists were unable to record a single bird of this species for the next 30 years. Perhaps it was the inaccessibility of the entire high altitude region that is home to these amazing birds, or maybe the species was really going through bad times and several pairs of James flamingos were struggling for survival during this period. Fortunately, the birds managed to survive. In the 1950s, the species returned to the official lists of flamingos living on our planet. The site of the miraculous resurrection was Lake Laguna Colorado, where several pairs of birds were found among the Chilean and Andean flamingo populations. 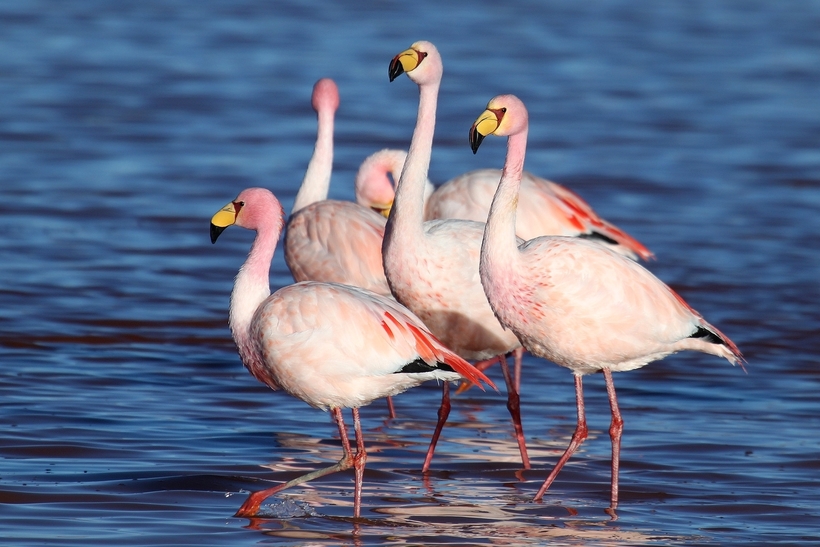 All flamingos, including the James flamingo, are characterized by an extremely slow breeding process. One pair lays only one egg during the mating period, and if for some reason it turns out to be damaged or the chick dies at an early age, the parents will not try to breed any more in that season. Flamingos depend entirely on shallow, saltwater lakes such as the Laguna Colorado, as these are the bodies of water that can provide them and the chicks with sufficient plankton. The numbers of the young vary greatly from year to year, so the bird population increases extremely slowly. In this regard, it seems a true miracle that a colony of nearly extinct birds now numbers more than 20,000. 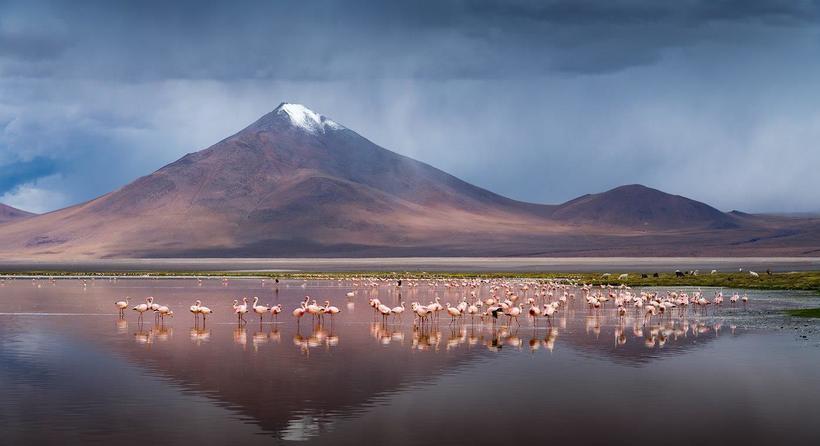 Today the Laguna Colorado is the favorite habitat of the James flamingo, where in addition to him live Andean and Chilean flamingos. Thousands of tourists come here not only to see the unusual crimson lake, but also to admire the graceful flamingos that the world almost lost forever. 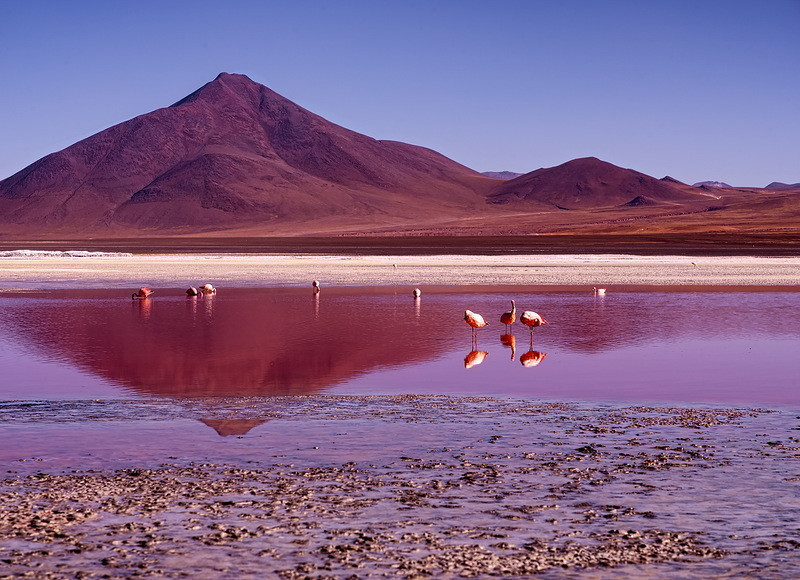 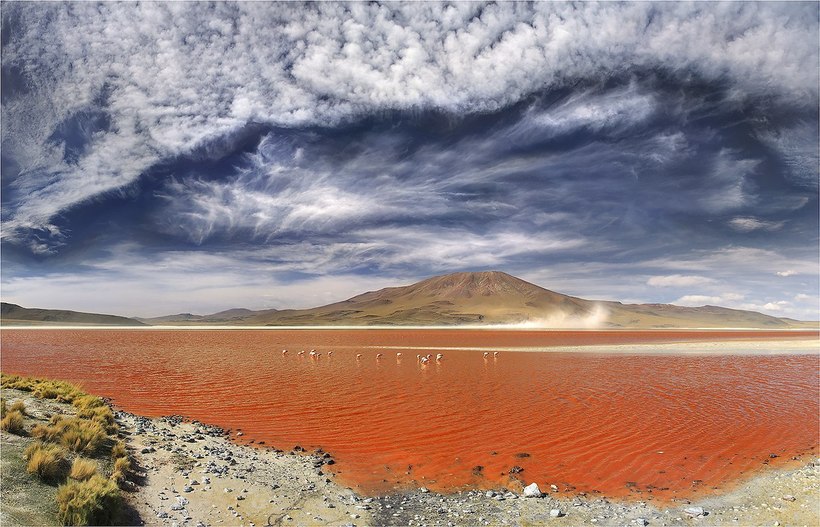 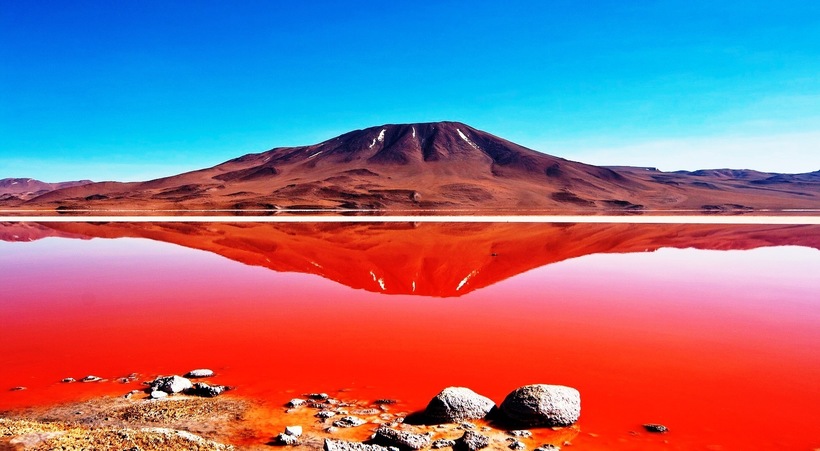 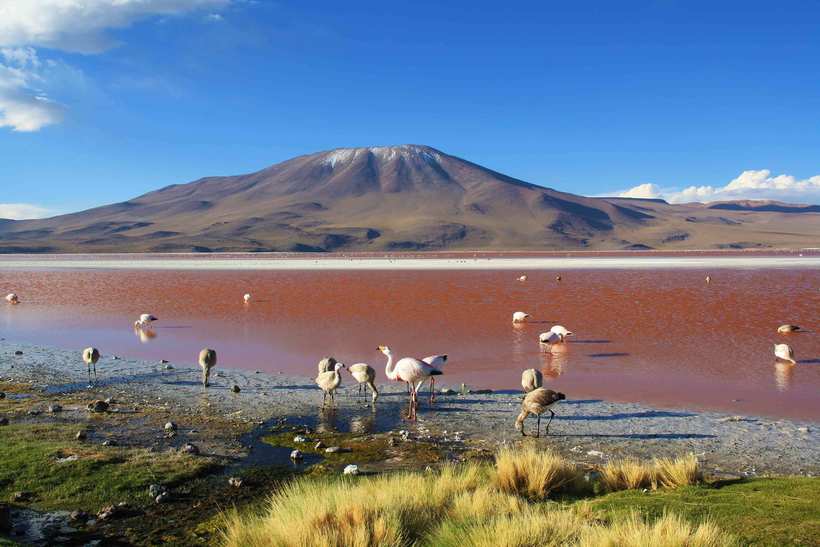 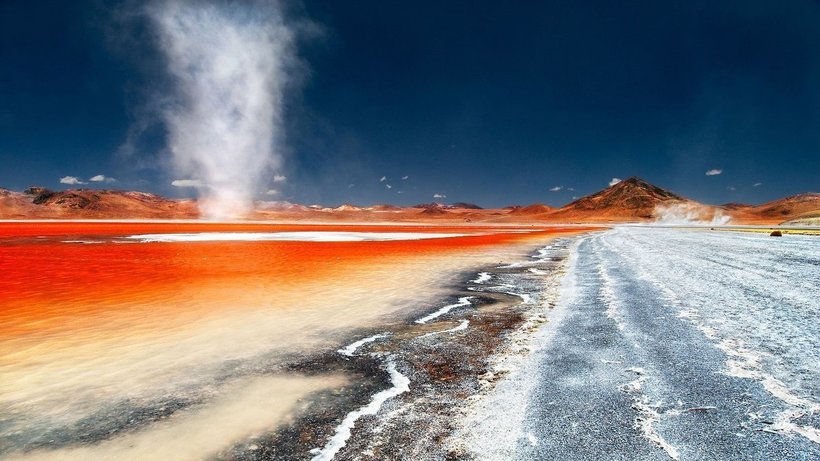 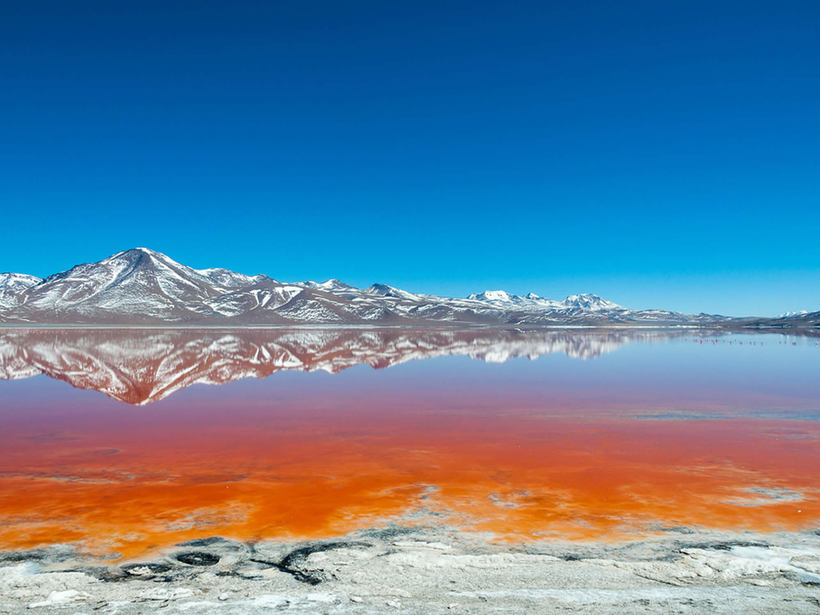 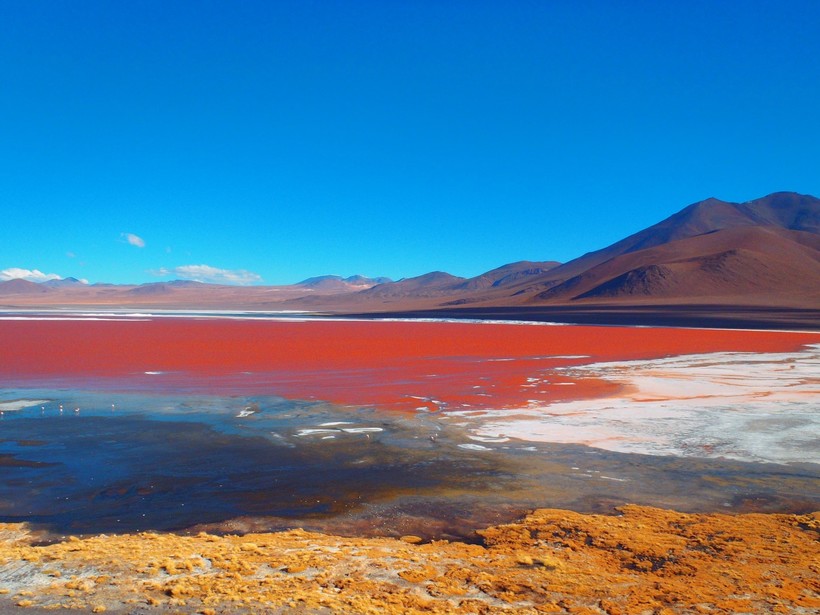 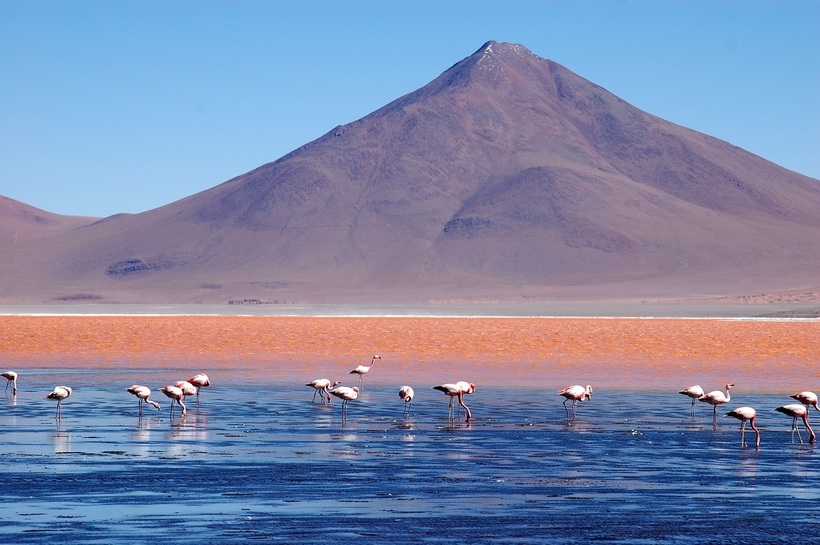 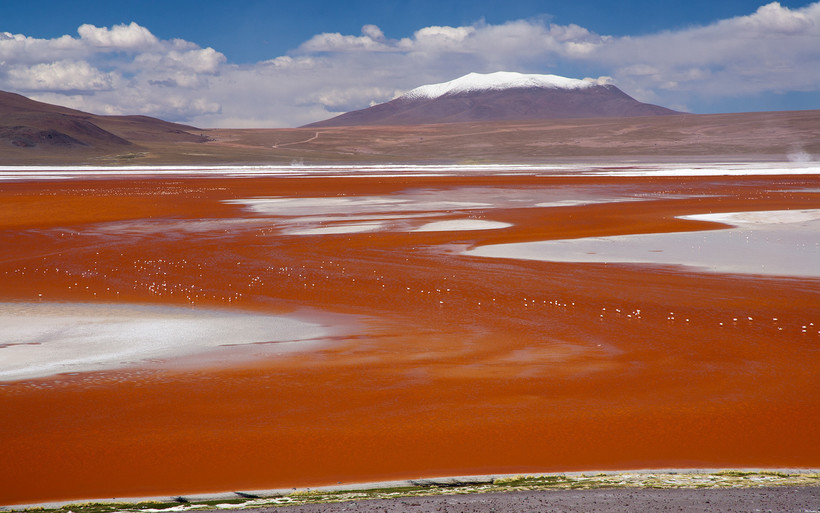