15 km west of Novorossiysk is the beautiful mountain lake Abrau. It is the largest lake of the Krasnodar region with fresh water. Surprisingly calm and quiet looks this corner of nature in the frame of the mountains of the western end of the Caucasus mountain range.

Lake Abrau on the map

The lake stretches from north to south. The left coast has a flat curved shape, but on the right there are three small bays, where the width of the lake reaches 965 meters.

Lake Abrau is mainly fed by the waters of the river of the same name, as well as springs, beating at the bottom and small mountain streams.

The water in the lake is saturated with dissolved limestone, so the transparency is low, no more than 1 meter, and the color of the reservoir is from emerald to white-blue. 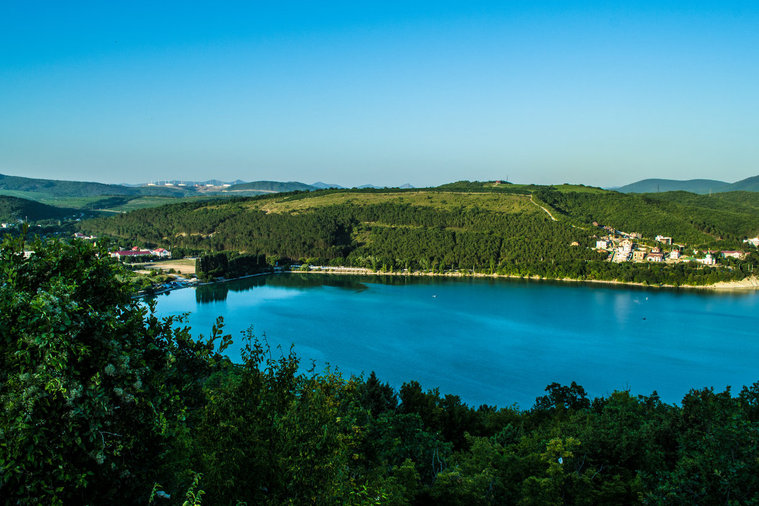 Theories of the formation of Lake Abrau

Scientists put forward several versions of the birth of the lake. According to one of them, the lake is a sinkhole of karst strata, which was gradually filled with the waters of the Abrau River and streams from the nearby mountains. But this theory is unlikely, as such sinkholes are usually round-shaped. Here, for example, like the Well of Souls in Argentina.

According to the second version, Lake Abrau is the remains of a prehistoric fresh water basin of the Cimmerian period.

There is a theory according to which the lake was formed as a result of landslides, which blocked the riverbed of Abrau. But this version loses too, since in the lower part of the lake there are no high peaks, and therefore the nature had nothing to obstruct the way of the river.

The most plausible version is that there was an earthquake in ancient times, which has changed the mountainous terrain in the area of the dam. That is, the layers of the Earth’s surface here have risen and blocked the flow of the river, and as a result, this lake was formed.

Lake Abrau is undrained. This means that it has no surface runoffs. Part of the water simply evaporates from the surface, and another part is absorbed into the ground in the southern part of the lake. In fact, there is no direct connection to the Black Sea. But there are suggestions that Abrau is connected by underground waters with the lake Maly Liman, located directly on the shore of the sea one and a half kilometers to the south. 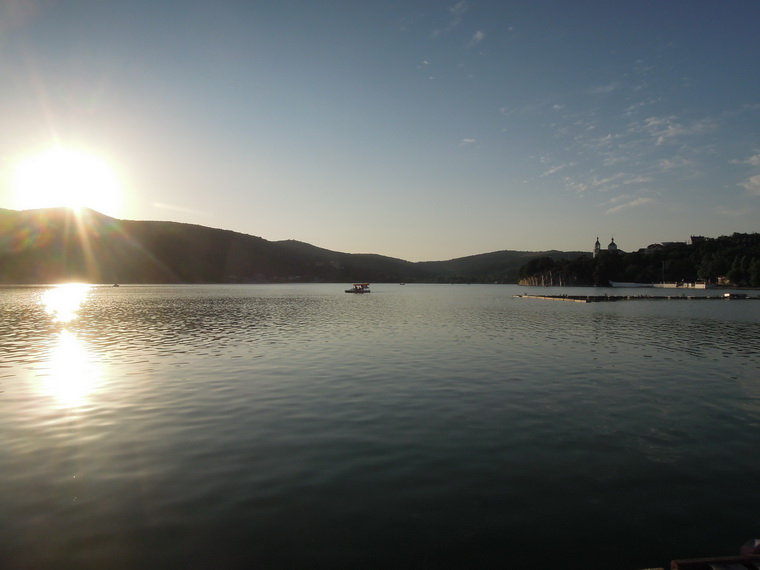 The name of the lake comes from the Adyghe “Abragyo”, which means “big” or “huge”. From Abkhazian Abrau can be translated as a depression or precipice.

According to legend, once there was a large and very rich village here. So rich that its residents, wishing to boast of their treasures, decided to pave the way to the sea and lay it with gold and silver coins. But the gods did not appreciate this enthusiasm and punished the mountaineers for their pride: the village fell underground, and a lake appeared in its place.

There is another legend (of course, tragic as most legends). A poor shepherd and the daughter of a rich and noble man lived in a mountain village. They fell in love with each other, but the girl’s parents were against it. One day, in order to prevent her from going out with the shepherd, they closed the doors in front of her with the words, “I’d rather the whole village go underground and be flooded by the river than for you to ever meet again.” As the saying goes, be afraid of what you wish for – it can come true. And so it happened, the gods did not have to beg for a long time, the village fell through and was covered with water. 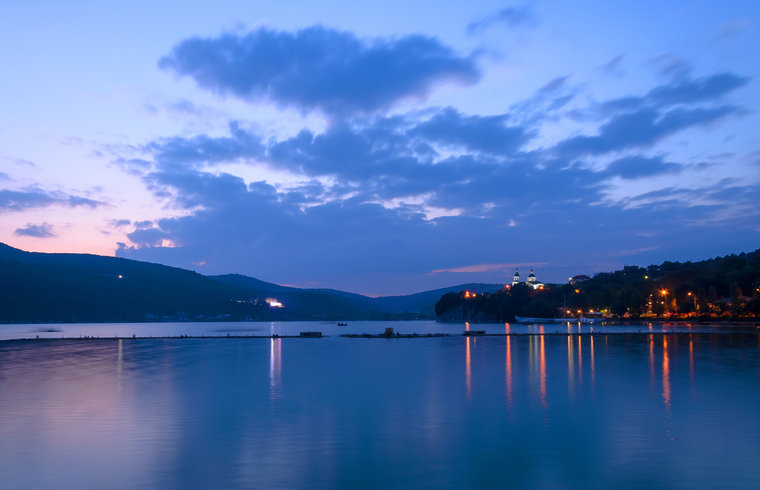 In 1870 by the order of Emperor Alexander II an “appanage estate called Abrau-Durso” was founded in the neighborhood of the lake. This name could be translated as “the hollow of four springs”.

From 1872 on the advice of wine-makers from France vineyards were planted near the lake. In 1890 the first wines under the brand of Abrau-Durso appeared: Bordeaux, Sauternes, Lafite and Burgundy. Since then, these regions have been famous for their winemaking traditions. 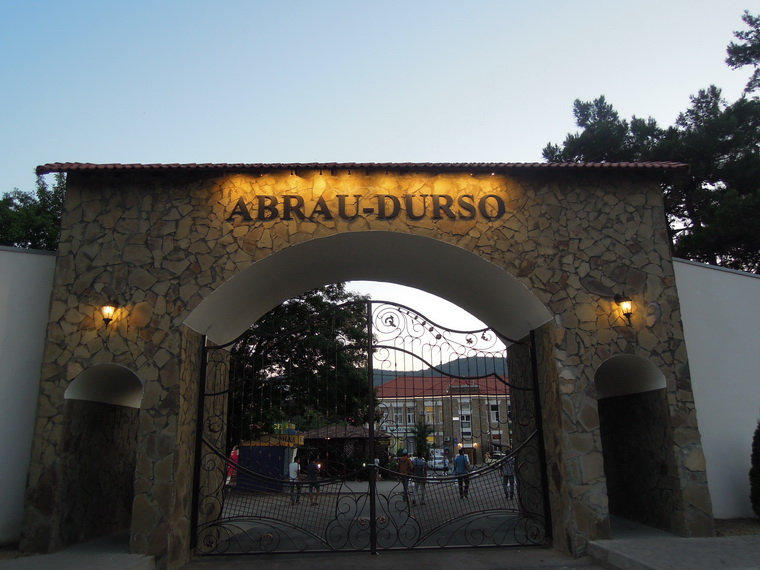 In 1891 the first batches of Abrau-Durso Champagne were on sale.

Since 1988, Lake Abrau has the honorary title “Monument of Nature”. 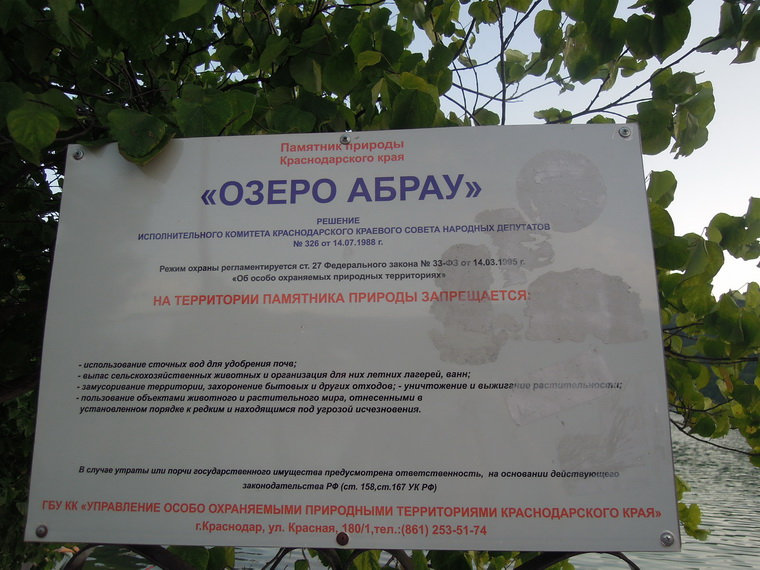 The nature of the lake Abrau

The climate and waters of the lake contribute to the comfortable habitation of several species of fish, arthropods and smaller animals. Fauna is represented by trout, minnow, carp and carp. And also here is found endemic species (characteristic only for this body of water) – Abrau tulka. In the waters of the lake are still found relict crustaceans Astacidae. Freshwater crabs inhabit near the shores. The flora is well represented by lavender, rosemary, figs and, of course, grapes. 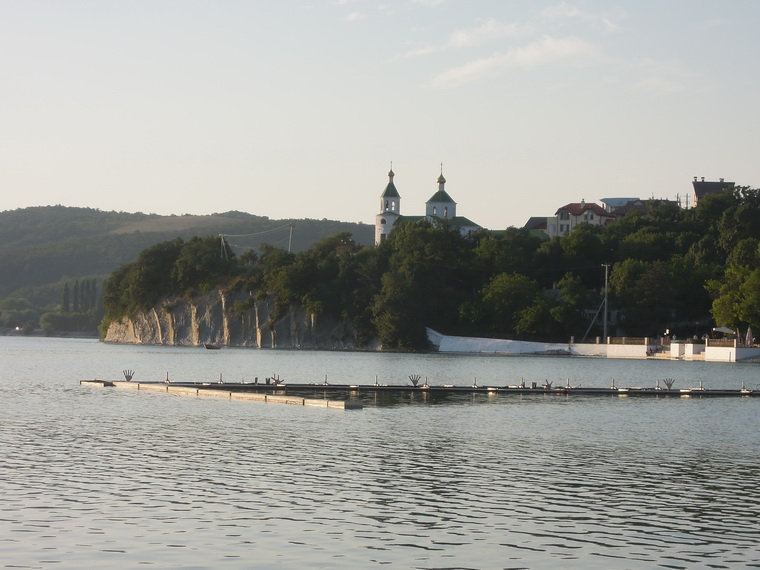 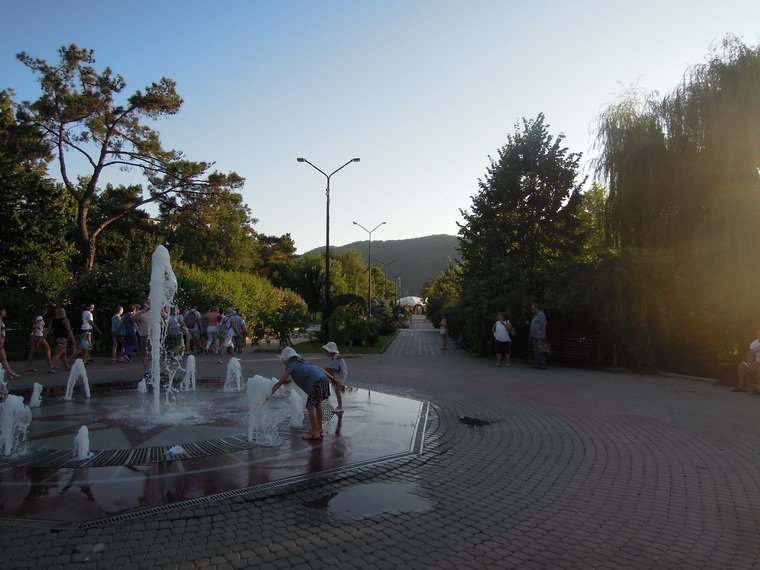 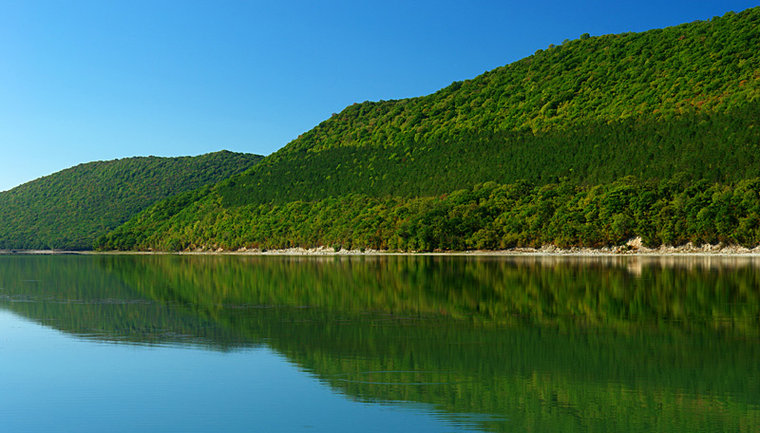 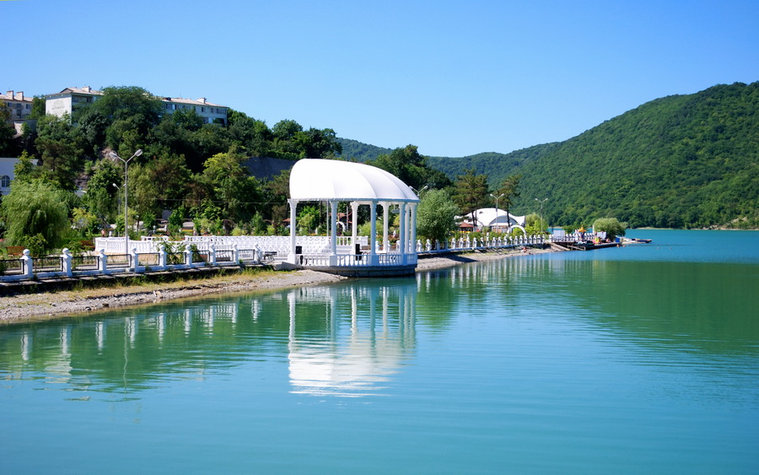 Embankment of the Lake Abrau 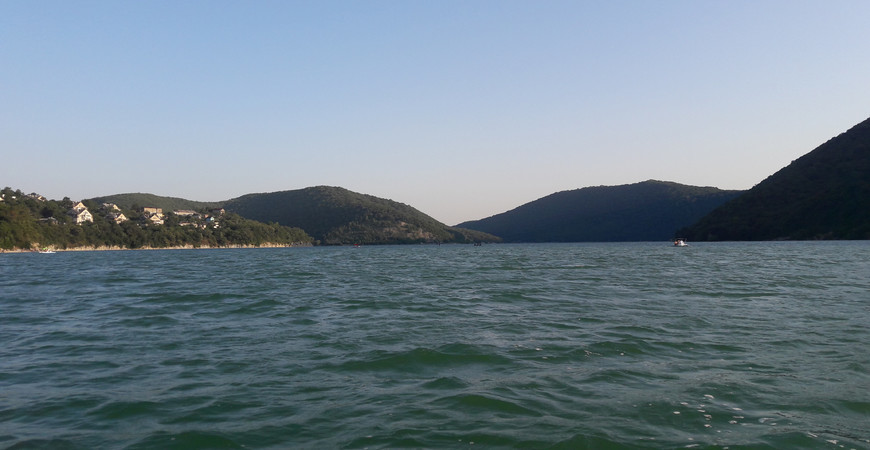 Lake Abrau is located near the village of Abrau-Dyurso, about 14 km from Novorossiysk. The freshwater lake is considered to be the largest body of water in the Krasnodar region. Along with the Abrau-Dyurso champagne factory the picturesque emerald blue lake attracts many travelers to the village.

Features of the lake

The length of the lake is about 3 km, width – about 600 meters. The depth of Abrau reaches up to 11 meters, recently it has become very shallow – previously this figure was 3 times greater. The reservoir is surrounded by a beautiful nature – mountains and forests.

Nearby there is an equipped embankment, along which you can walk to the observation points. Vacationers love to take pictures near Lake Abrau, because you get great pictures here. Many tourists in their reviews note the inexpressible color of the water, the beauty of the surrounding park.

Abrau from Turkic is translated as landslide. Among scientists there is no consensus about the origin of the lake. Some believe that it was formed as a result of the collapse of the rock, which blocked the river Abrau. Others believe that the lake owes its appearance to a shift of the Earth’s crust – allegedly the shifted mountains dammed the estuary of the river, which created the lake.

Not far from the lake there are many options for accommodation. For fans of comfortable conditions will suit hotels, which provide a high level of service. More budget options can be found in hotels, is also worth considering accommodation in the private sector. Near the lake there are camping sites for those who like to relax in nature with amenities.

Locals and tourists love to relax on the lake, located in such a picturesque place. There are conditions for beach recreation and fishing. Lovers of walking will be pleased to relax in the well-groomed park with landscape compositions and interesting art objects. It’s great to walk through the woods, admiring the nature and breathing in the fresh air.

One of the most popular resting places is near the wooden pier, which is used to enter the water. It is located near one of the hotels on Industrialnaya Street. Another convenient place for a beach vacation is the stretch between the village and “Limanchik” beach, which is located between the Maly Liman lake and the Black Sea.

Some travelers come to Abrau for a few days and live in tents, enjoying a “wild” vacation away from the hustle and bustle.

You can appreciate the beauty of the lake and its surroundings from the reservoir itself, riding on water transport. The reservoir is a monument of nature, in connection with this water is forbidden to use motor boats. However, you can enjoy water rides by renting a boat or catamaran.

In the summer evenings on the lake begins a colorful show – the show of singing fountains. They are installed on the lake itself not far from the shore. The laser show is accompanied by music – from classical compositions to modern hits. You can watch this mesmerizing spectacle from the shore or from rented boats and catamarans.

The lake attracts fans of fishing. In the reservoir live: carp, minnow, bighead carp, bream, crucian carp. On the shore you can find crayfish. Fishing is done both from the shore and from rowing boats.

There are many beautiful legends that tell of the origin of the lake. According to one of them, many years ago there was a plains area inhabited by Adygs on the site of the lake. The richest resident had a beautiful, kind and hardworking daughter, and even the birds listened to her singing. One day, while working in the fields, she heard the enchanting melody of a flute. Moving to the sound, she came to the musician, who happened to be a poor shepherd. The young people fell in love at first sight, but the girl’s parents were against an unequal marriage – it was not the groom they wanted for their beloved daughter.

READ
Alley of Chiefs - underwater museum of Tarkhankuta in the Crimea. Photo description

Her father locked her up, believing that she would come to her senses in time. One day, during a noisy feast, she did manage to escape. The rich men were so disorderly at the feast that they poured wine and threw bread in it in front of the poor people, thus demonstrating their wealth. As they did so, they provoked the wrath of God, who made the village fall into ruin and a lake appear in its place.

When the girl returned, she saw the lake instead of the village, and realized that her parents and friends were gone. She burst into tears, which turned into a brook called the Tears of the Circassian Girl. In desperation, she even wanted to drown herself in the lake, but it picked her up and carried her across the surface of the water to the other shore. There she met her lover, who was able to save her from despair. It is said that to this day at night you can still see a strange shimmer on the lake in a certain place, supposedly the footprints of the girl who walked on the waves.

You can also get to the lake by car and cab: Yandex.Taxi, Gett, cab “Maxim” and others.