Kerið is a lake in the crater of a volcano. Iceland

A small northern country of Iceland has in its stock a lot of attractions. However, most of them have names difficult to pronounce. Such as Seljalandsfoss waterfall or the famous Eyjafjallajökull volcano. Against their background, the name of Lake Kerid stands out for its brevity and comprehensibility for us. In addition, it is an interesting and quite a sightseeing place.

Lake Kerid is a small body of water in the crater of the volcano of the same name. It is located in the southwestern part of the country, 200 meters from the road Biskupstungnabraut (or more simply road No35) and 15 kilometers north of the town of Selfoss. The lake is included in the list of attractions of the Golden Ring of Iceland.

Lake Kårid on the map

Kerid is located at an altitude of 214 meters above sea level, at the bottom of a crater about 55 meters deep. The caldera of the crater has the following dimensions 270 by 170 meters, and the size of the lake itself is about 100 by 62 meters, which is comparable to the size of a soccer field. The depth of the lake does not exceed 14 meters, and the average about 10 meters. The shoreline is almost a regular oval with smooth edges. This is, of course, due to the shape of the caldera. 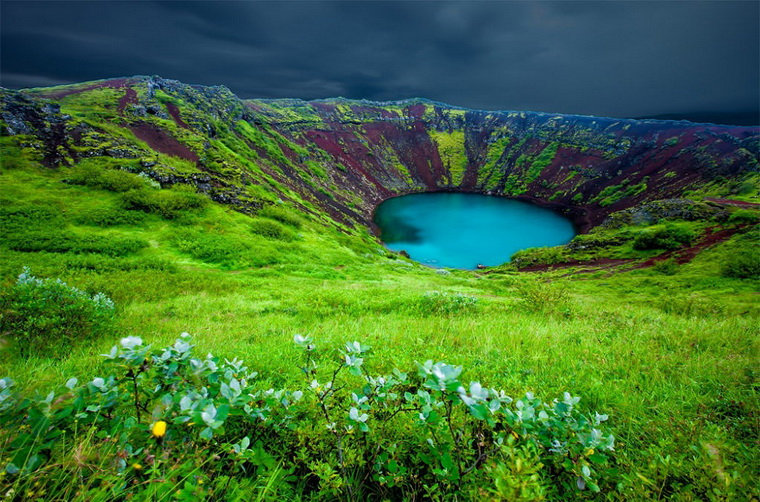 Kerid crater was formed about 6,500 years ago and lies in the northern part of a series of craters known as Tjarnarholar (in the original Tjarnarholar). Traces of volcanic activity are not very visible here, as most of the eruption sites are low-lying and many of the craters are hidden by vegetation, but some of them are still visible and well known. In addition to Kerid, these are also craters in the Seydisholar area.

Volcanologists have suggested that Kerid is an explosive crater. That is, a crater formed at about ground level by an explosive eruption. However, deeper research in the area did not reveal the presence of any ash deposits that could be attributed to an explosive eruption. It is now believed that Kerid was originally a large cinder crater. In its present form, the crater was probably formed by a small magma chamber beneath the surface of the earth, the upper part of which collapsed, thus forming this formation. Gradually the crater filled with groundwater, and a lake appeared.

The remarkable fact is that the water in Kerid is not depleted, but rises and falls in accordance with changes in the groundwater horizon. Thus, Lake Kerid is a kind of marker or indicator of the water table in the area.

If you want to see a real classic, though extinct, volcano, you should pay attention to volcano Fujiyama in Japan. By the way Fujiyama is private property.

The inner slopes of the crater consist not of the traditional black, but red volcanic rocks, which adds a rather interesting look to Lake Kerid. Vegetation on the slopes is sparse. On the southern side, the slopes to the lake are very steep, but on the northern side they are so gentle that you can go right down to the shore of the lake. 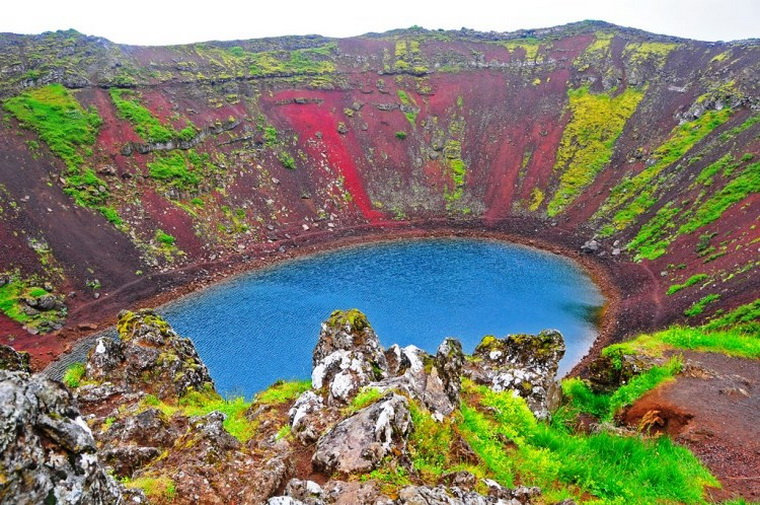 German scientists measured the depth and explored Lake Kerid in 1932. Then they measured a depth of 8-9 meters and found crustaceans and plankton in the water.

Naturalist Geir Guilla conducted additional studies of the water from 1941 to 1954. According to his data, it turned out that the greatest depth is 8.8 meters and the smallest is 4.8 meters. The water temperature is about 0 o C in winter and +12 to +16 o C in summer. Nematodes, chironomid larvae, vatnabobba (a small snail with a shell) and vatnaskeljar (a type of the smallest freshwater mollusc) were found in the lower water layers. In the upper layers, zooplankton species svifdyr, brunnklukkur and a small stickleback fish (gasterosteus aculeatus) are found.

Both the lake and the Kerid crater are of interest to scientists, tourists and even musicians. Get to the lake for free is not possible. You will have to pay for the entrance of 400 ISK per person (about 225 rubles). As we’ve already mentioned, Kerid Volcano is part of the Golden Ring of tourism, so if you travel around the country, it will most likely be included in the obligatory program of many sightseeing tours. Be sure to check out this sightseeing spot. 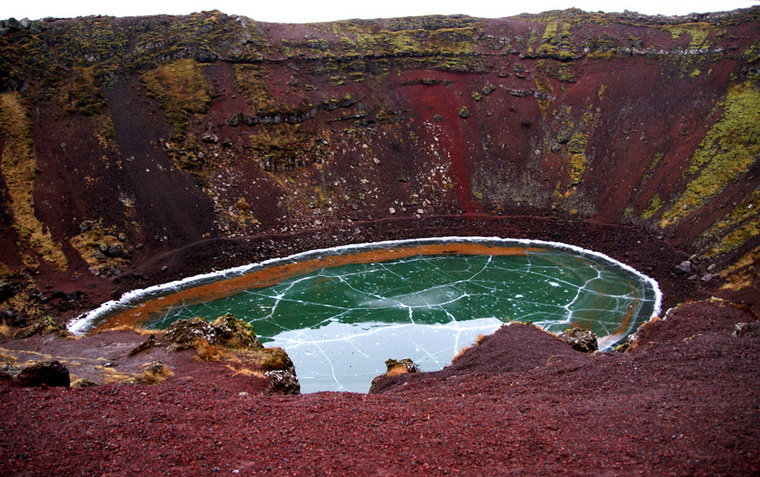 Ice on the Lake 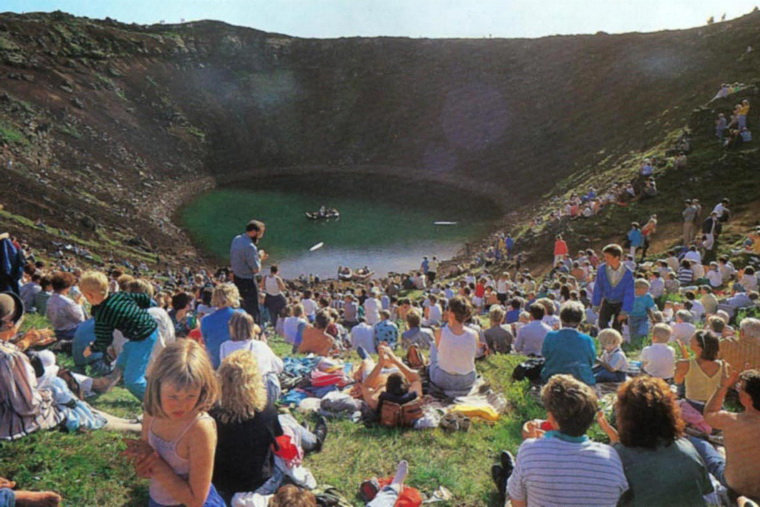 Kerið is an amazing lake in the crater of a volcano, filled with milky blue-green water against a backdrop of black and dark red slopes. Kerið is a popular destination for tourists and locals.

The crater was formed by a volcanic eruption over 6,000 years ago.

It is the northernmost of the Tjarnarhólar group of craters, and the unusual color of the lake is one of several crater lakes in the so-called western volcanic zone of Iceland. This zone includes the Reykjanes Peninsula and the Laungjökull glacier.

How deep is the Kerid crater?

According to measurements from the 1950s, the water was 8 to 9 meters deep .

There is a hiking trail for visitors to get up the black and red slopes, contrasting with the striking aquamarine water. It’s like being on another planet.

It looks especially cool when it’s cold, when the water in the crater freezes and becomes ice-crusted.

Kerid is located 15 km north of the town of Selfoss, just off Highway 35 in South Iceland. It is located on the Golden Ring tourist route. Parking is in close proximity to the crater.

How much does it cost to get to the Kerid Crater?

Check out a detailed guide to the region. Find out what cities to visit and what places to see: “The Golden Ring” and Western Iceland 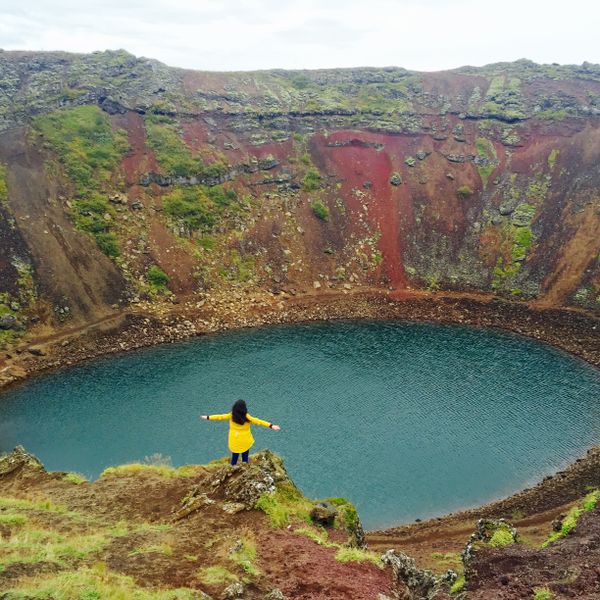 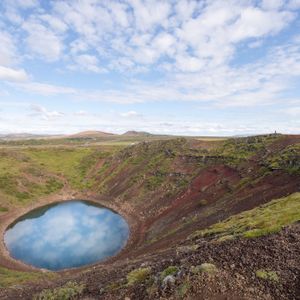 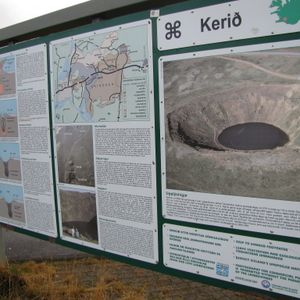 On the hillside above the village of Hveragerði, a new area of hot springs has emerged after the massive earthquake that struck South Iceland in May 2008.

“Nesjasvellir is the second largest geothermal power plant in Iceland.

In ancient times Skaulholt was the most populous, richest and most influential settlement in Iceland.

The Gjábakkahellir lava tunnel in the Tingvellir valley, formed by an eruption 9,000 years ago, has a unique feature: it is open at both ends, so you can walk through it.

Please cite the source when quoting material from this site, and respect the work of others. Thank you for your understanding