Gorgeous mountains, an emerald lake, endless forests and the feeling of being completely dissolved in nature. What could be better? All these words can be applied to amazing mountain lakes. Canada, which has quite a few mountains, naturally possesses such lakes. 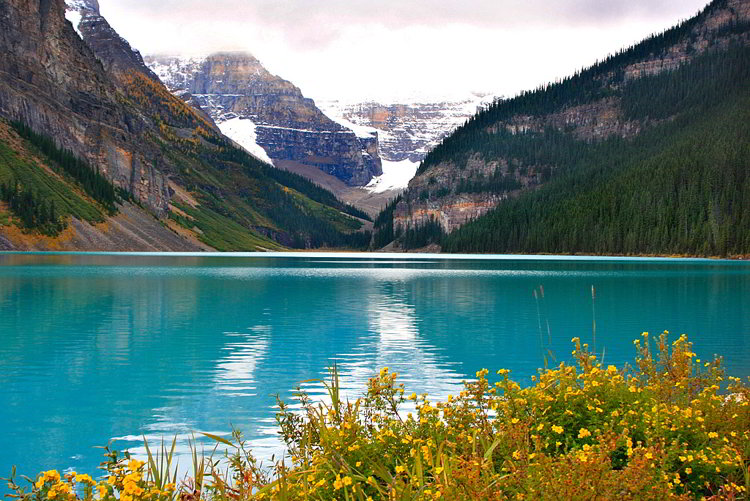 Snow-capped high mountains since time immemorial protect one of the best lakes in the world, located in the southern part of the province of Alberta in the Banff National Park. The body of water is known as Lake Louise. Although, for our ears the name Louise would be more suitable, and then you get the feeling of plurality, such as Lake Jellyfish (this is not a metaphor, the lake really exists on our planet – follow the link above and you will find many interesting things).

But it so happens that all over the world this Canadian attraction is known as Lake Louise, so we will call it by that name. The lake is located in the south of the Rocky Mountains. Three high peaks surround it. They are Mt. Fairview, Devils Tumb, and St. Piran.

Lake Louise on a map

Both winter and summer beauty of the lake is incredible. Amazing color water, dense forests along the shores and white mountain peaks. The scenery is simply unreal. But often on the Internet for Lake Louise pass off no less charming Lake Moraine, by the way, located in the same Canada. Take a look for yourself at Lake Moraine. You must agree, it is very similar. But, since you and I already know that Moraine is in the Valley of the Ten Peaks, we can safely distinguish one lake from the other.

Notably, Lake Moraine is only 10 kilometers south of Lake Louise, so if you happen to be in these parts, you should see both mountain bodies of water.

The lake owes its name to Louisa, the fourth daughter of Queen Victoria of England. She was the wife of John Campbell Lorne (then governor-general of Canada, or governor-general as he was known).

The site was discovered in 1882 during the construction of the railroad. Builder Tom Wilson heard some noise in the distance. The local Indians said it was “White Mountain” making noise over “Little Fish Lake.” Tom decided to see what was hiding there, and revealed to the world this amazingly beautiful lake. The beauty of the scenery was so striking that he was unable to tear his eyes away. Tom might have named the lake after his wife, but the governor general was another citizen who also had a wife. And, apparently, he loved her. So the lake has been named Louise ever since. 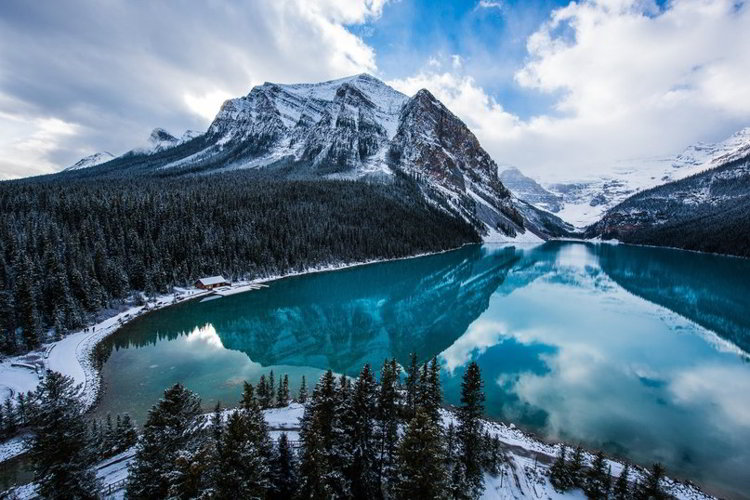 The lake did not get its present name all at once. Originally, it was simply called Emerald Lake. Because the color of its water is almost always similar to the color of this precious stone. Scientists explain the mesmerizing color in a simple way. The lake is fed by meltwater flowing down from nearby glaciers. As the water makes its way from the mountain peaks to the lake, it is saturated with compounds that are abundant in the local rocks.

We will not study the details of the chemical composition. We will only say that they are not only safe, but even useful for humans. Combined with the purest mountain air and the absence of nearby industrial enterprises, it creates an ideal place for recreation. 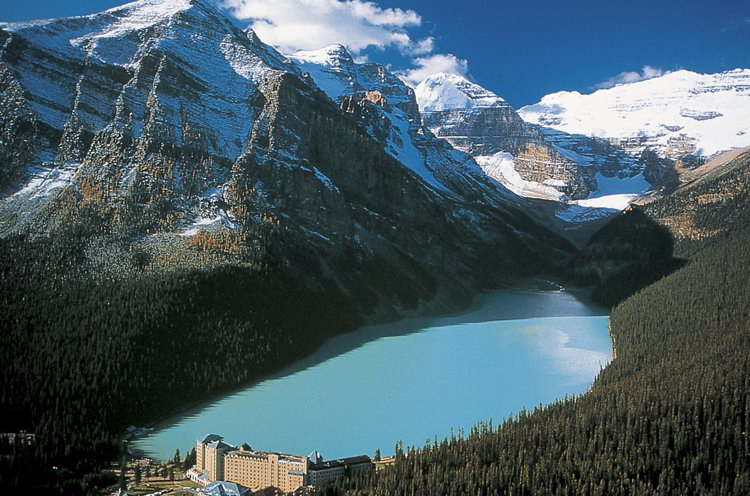 There are many small lakes and waterfalls in the vicinity of the lake, which can be reached by forest trails. You can say practically a paradise for travelers. Quite developed infrastructure – a lot of campsites, campgrounds and entertainment.

The choice of travelers offered the usual hiking, horseback riding, biking, tennis. For fans of “spicy” rafting and even dog sledding. Nearby there is an excellent ski resort. In the northern part of the lake, right on the shore is a chic hotel Fairmont Chateau, which has the highest class (5 stars) international certification.

There are some natural objects which are impossible to admire: at any time of the year they give so many unforgettable exciting impressions that you want to return to them again and again. One of Canada’s true gems is a unique lake with the romantic and gentle name of Louise. 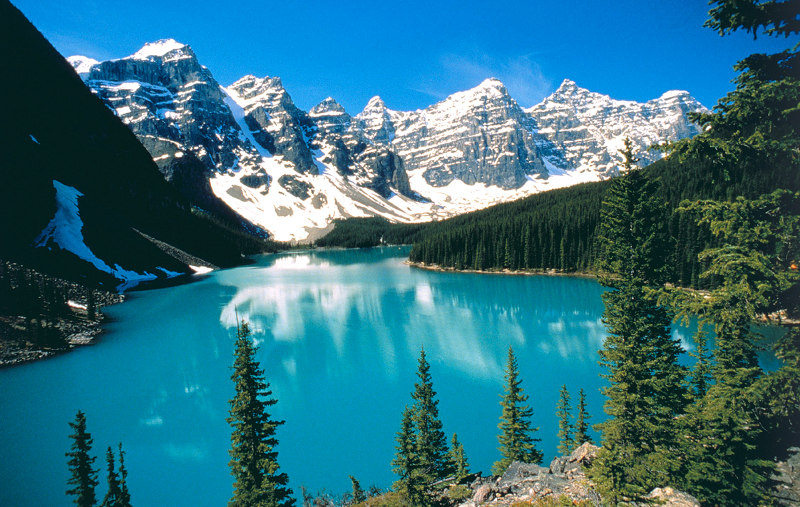 History of the lake

The lake of magical beauty was formed over thousands of years as a result of melting glaciers of the Rocky Mountains: flows of glacial water flowed from them, washing out sand grains of rocks and accumulated in a deep hollow surrounded by a ring of peaks. Thus, gradually filling with melt water, a miracle lake of unusual blue-green color was formed, for which it was first called Emerald. Apparently, pieces of rocks, dissolving in the water, made it look like this precious gem. The wonderful lake is quite small: its area is 0.8 sq. km, its length is 2 km, and it is half a kilometer wide. 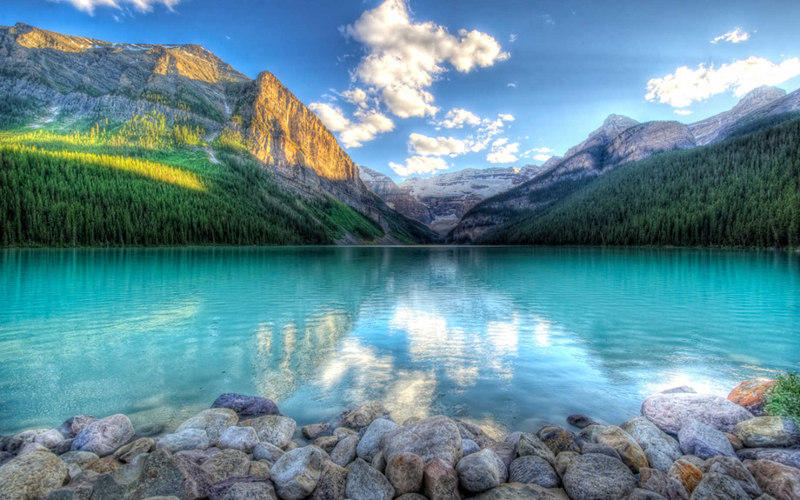 The natives of Canada have long been familiar with the lake. When in the late 80s of the 19th century, the CTL (Canadian Pacific Railway) was laid in the vicinity, builders heard a deaf monotonous noise in the distance. The origin of the strange hum was explained by an Indian guide, who said it came from a “white mountain” near “a lake with small fish. Interested in it in earnest, Engineer Wilson and his colleagues followed the indicated landmarks and saw an incredibly beautiful picture of the lake. For several minutes they did not utter a word: silent admiration of the surrounding landscape engulfed all present.

Emerald water mirror, sparkling with pristine purity, was surrounded by snow-white peaks and dark green velvet of coniferous forests on their slopes. The discovery of the marvelous body of water by Europeans was momentous: the lake became the most popular place for Canadians to visit and the natural jewel of Banff National Park.

Why was the lake renamed? 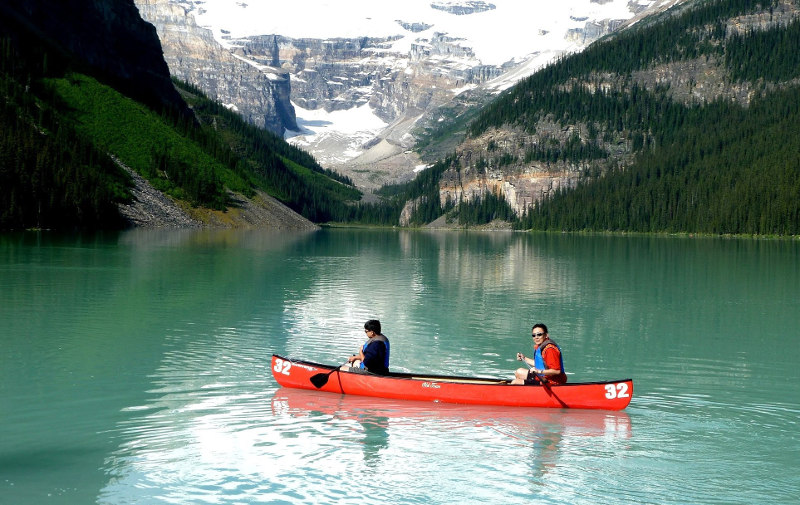 The lake got its present name from the name of a beautiful and clever woman, the daughter of the famous English Queen Victoria, whose reign was called “the Victorian era. The English princess was as intelligent and progressive as her mother. As the wife of the Canadian governor, Englishman John Lorne, she was actively involved in the public life of the state, responsive to the needs of the local population, seeking to positively solve their problems.

For this, Louise earned the boundless love and deep respect of the people of Canada, although she lived here only 5 years. After leaving the land of forests and mountains, the princess continued to take an interest in its fate while in England. In memory of the remarkable woman, it was collectively decided to give her name to the most beautiful natural treasure of the country – the mountain lake.

The enchanting surroundings of the magically beautiful lake beckon tourists all year round, in any season the local scenery delights with its magnificent diversity. In winter, when it freezes over, when jets of waterfalls turn into ice intricate sculptures, and the mountains are covered with huge white hats, everything around seems like a fairy tale kingdom of the Snow Queen. 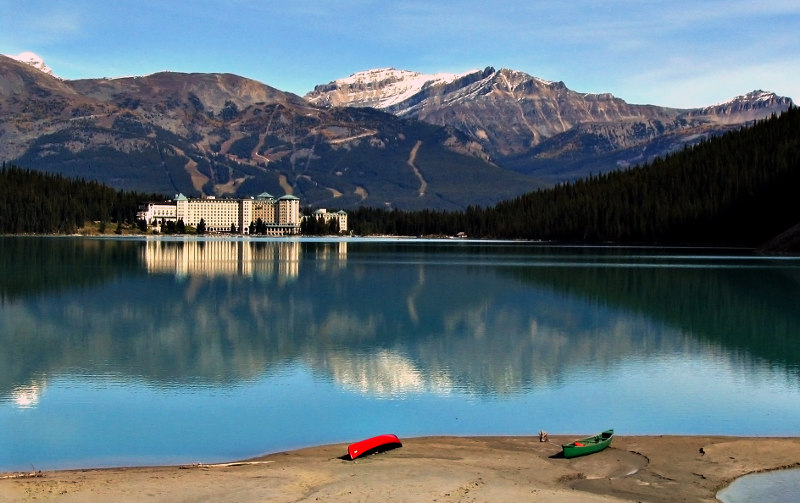 A lot of winter activities in the form of downhill skiing, skating and sledding on the bright blue mirror of the lake on a background of unearthly beauty bring a lot of pleasure and enjoyment, making the holiday a real fairy tale. The ski resort, equipped with modern infrastructure, creates all conditions for a wonderful holiday from November to mid-May. It regularly holds various holidays, contests, festivals, where come not only ordinary tourists, but also world celebrities: Hollywood stars, musicians, singers, artists, writers, journalists.

READ
Crater Lake is the deepest lake in the United States

Awakening nature, deep blue sky reflected in the lake, bright green of pine needles, the first flowers, mating grouse create a full of charm picture. When the snow avalanches come down, dozens of climbers rush along the beaten paths to the peaks; water lovers take boat trips and go rafting; fishermen have an opportunity to sit with their fishing rods. All equipment can be rented without problems.

Autumn paints the shores of the emerald lake with the yellow and crimson colors of the growing grasses and bushes, creating no less wonderful scenery. A fall stay here is an opportunity to breathe in plenty of clean air and take unforgettable walks and rides through the eco-friendly corners of the reserve.

Lake Louise on a map

It’s a blessing to be in a place of paradise in Canada such as Lake Louise and the surrounding area!

There are many other interesting places in Canada, which include the Thousand Islands Park and Majestic Bay of Fundy. – Read on the pages of our website.